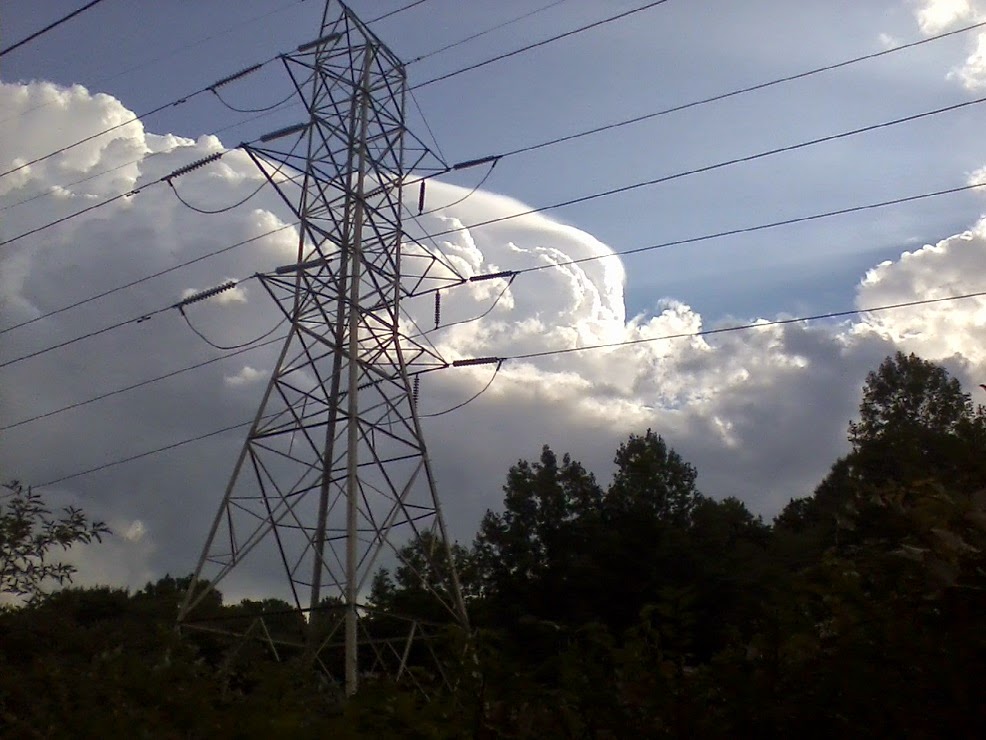 A cumulus congestus-with-pileus (or scarf) cloud as seen through a high tension wire tower in the foreground along the Washington & Old Dominion (W&OD) bicycle trail around mile marker 15 in Fairfax County, Va., 5:47PM August 17, 2014.
These pileus-capped cumulus congestus clouds are often a prelude to cumulonimbus formation. However, on this day, no real thunderstorm activity formed on this afternoon in the D.C. area.
*******


This entry features some pictures from my Sunday afternoon and evening in both Anne Arundel County and later on a lengthy bicycle ride from the Virginia exurban end of the Silver Line back into D.C. 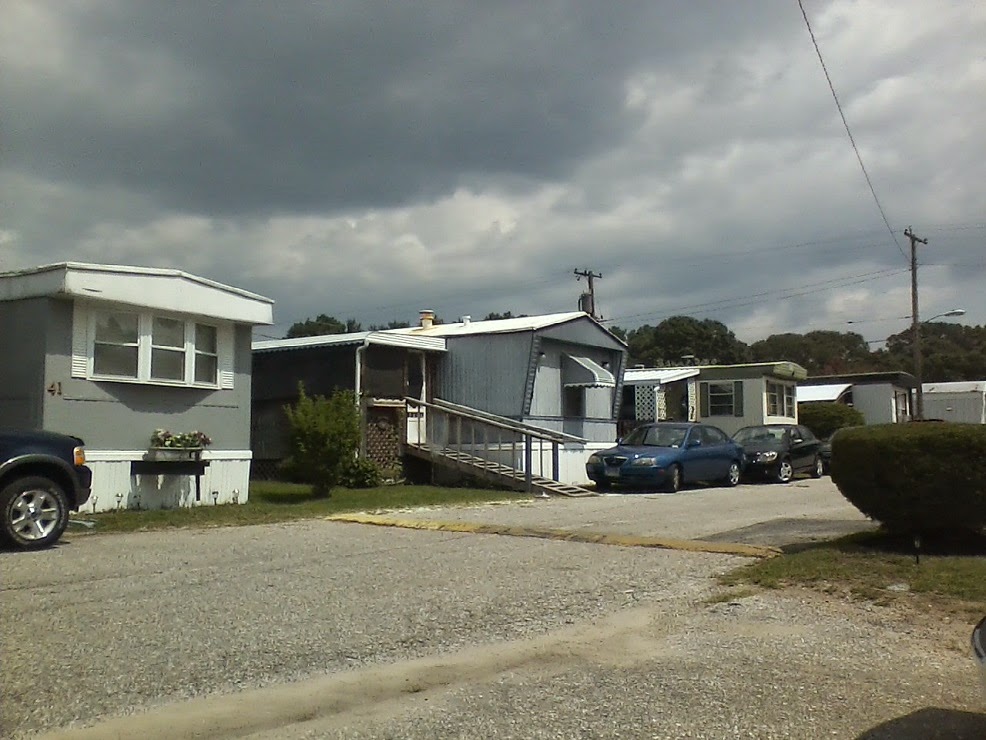 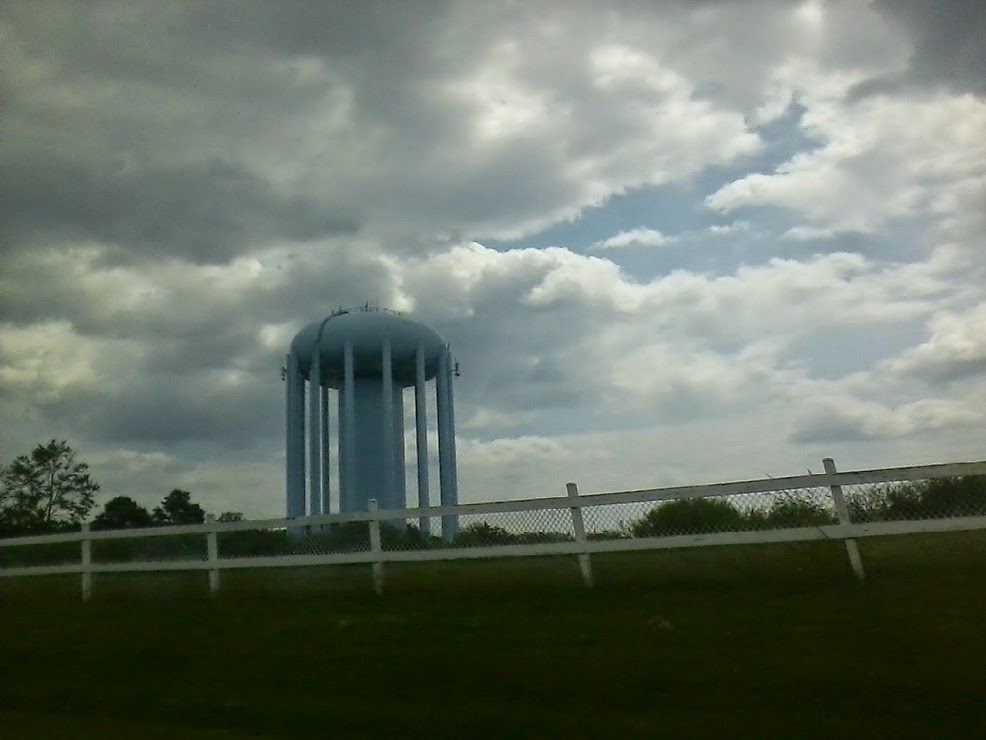 The giant ellipsoidal water tower located off East West Blvd. in Millersville, Md., l2:26PM August 17, 2014.
Elevated atop a central shaft and series of smaller legs, this sky-blue water tower resembles an alien spaceship. I've featured this water tower in at least three other entries over the past 3-1/2 years including here, here, and here. (It is painted bright sky (cerulean? azure?) blue color, although on this day and in this picture, it isn't obvious.)
Unlike the immediate D.C. area with the Potomac River, the Baltimore area lacks a single large river for its drinking water supply, and instead it relies on a network of reservoirs (e.g., Loch Raven, Prettyboy, Triadelphia, etc.) and a large number of water towers that dot the landscape.
******* 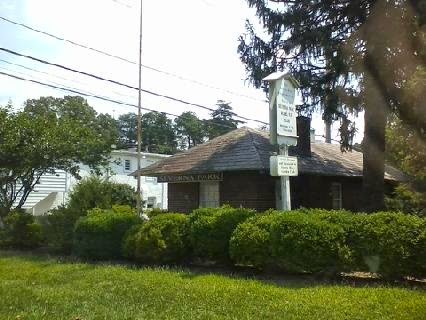 The old Severna Park train depot along the Baltimore & Annapolis (B&A) hiker-biker trail that now houses the Severna Park Model Railroad Club.
The B&A Trail runs for 13.3 miles through northern Anne Arundel County from Glen Burnie to just north of Annapolis. I recall when the trail first opened back in 1990 (and I walked it MANY times in the early 1990s; I biked it far less frequently). It is now part of the East Coast Greenway system that is still under development. The B&A Trail follows the old Baltimore and Annapolis Railroad.
The Severna Park and Arnold stretch are quite nice. My mom's little office is located right off the B&A Trail in Severna Park.
*******


My mom, Ray, and I went to Adam's Ribs in Severna Park after stopping briefly by her office. Though she has only worked in that office for less than 3 years, it is located next to the building where she worked for about 27 years (the firm moved next door in 2011 or so). She has been with that firm for just over 30 years.
As an aside, I calculate that the Earth's human population shifted about 5-1/2 billion people -- between births and deaths -- in that 30 year period (roughly 130 million born per year and roughly 57 million dying per year -- add the totals to get the shift). That's an amazing thought. As for my mom, she will probably only be there for another year and a half before retiring.
Anyway, after lunch, I got dropped off at New Carrollton Station and headed home, only to head back out again on my bicycle to the Foggy Bottom Metro and thence onto the Silver Line to its Virginia end for a repeat of a ride I did late last month and discussed in this entry. 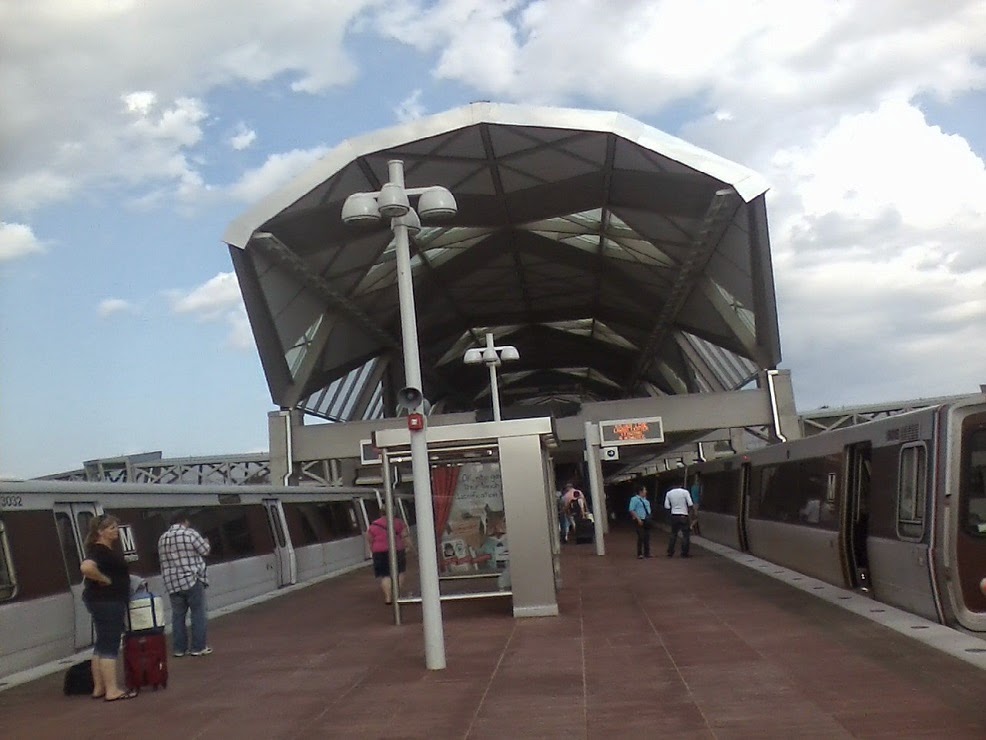 The Wiehle - Reston East Metro station platform, Reston, Va., 5:17PM August 17, 2014.
This time, I was able to get to the nearby Washington & Old Dominion (W&OD) bike trail more quickly. This trail also is an old freight train line. Oh, yes, in looking at the brand new distance signs along the above-ground Silver Line -- distances are given in feet between stations -- I was able to determine that the 5-1/2 mile (approx. 30,000 foot) distance between Spring Hill and Wiehle - Reston East stations accounts for HALF the entire new portion of the Silver Line beyond where it separates from the Orange Line.
******* 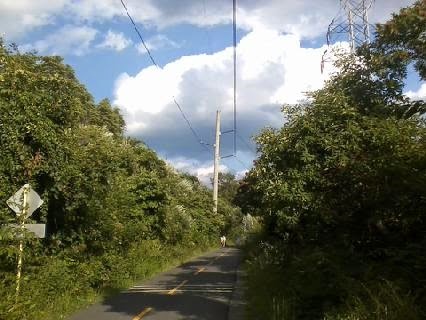 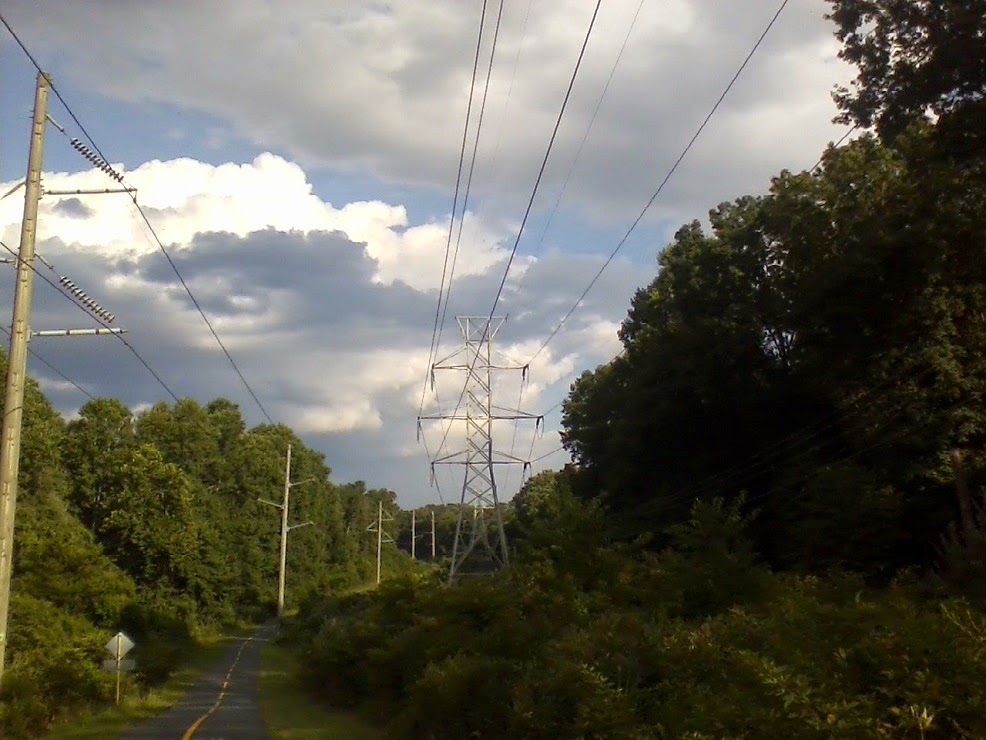 The W&OD trail near mile marker 16, Reston / unincorporated Fairfax County, Va., 5:37PM August 17, 2014.
It's a very lovely stretch -- all rolling and bucolic -- out there along the trail and under that high-tension wire pathway. Fairfax County itself is a Northern Virginia exurban nightmare that I couldn't abide.
******* 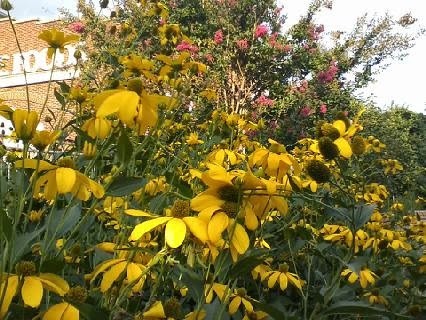 Flowers growing outside the Whole Foods in Vienna, Va., 6:25PM August 17, 2014. (Are these Black Eyed Susans? For some reason, I didn't think they were when I took the picture.)
As for Whole Foods, I am so not a fan for a variety of reasons including its awful CEO, the lack of practicality as a grocery store, and the mobbed, bus station-like quality of the P Street store here in D.C. However, this Whole Foods in Vienna was much nicer with its various other amenities including what amounts to a dedicated sit-down snack and pizza bar and little beer/beer bar. I stopped for a snack for about 20 minutes before heading back out.
******* 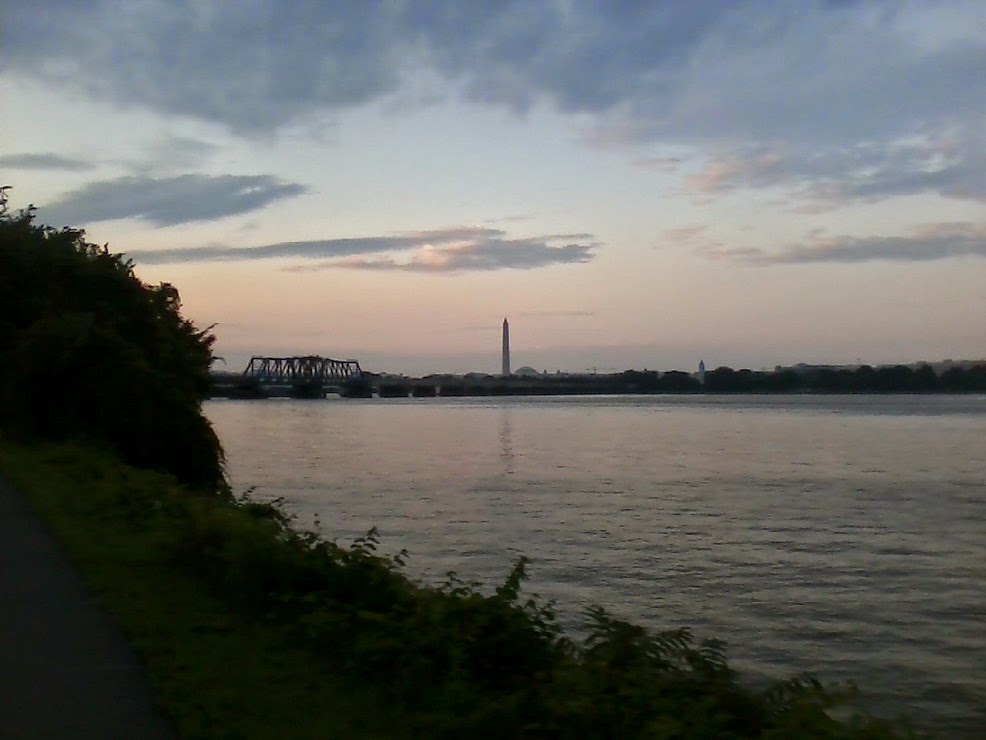 Evening view of the Washington Monument and "monumental core" of Washington, D.C., as seen from the Mount Vernon bike trail on the Virginia side, 7:47PM August 17, 2014.
By this point, I had completed the approximately 16.7 miles of the W&OD trail, another 2.2 miles connecting over to the Mt. Vernon bike trail, and was almost done another 3 miles up the Mt. Vernon bike trail to the Arlington Memorial Bridge or just about 22 miles.
However, I had also biked to 1.5 miles to the Foggy Bottom station from my apartment. In addition, I had another 2 miles to get over the bridge into D.C., around the Lincoln Memorial, and then over to Georgetown, where I locked the bike at the edge of Georgetown Waterfront Park / Washington Harbour area and went to Chadwicks for dinner at the downstairs bar. I then had another 2.5 miles to bike to Larry's Lounge and about 0.5 mile back home -- for a grand total of about 27 miles.
Of note, it is now quickly beginning to get darker earlier and I soon won't be able to do bike rides that start at 5PM on Sunday.
*******


OK, that's all for now. I will try to update this blog tonight after work and the gym.
--Regulus
Posted by Regulus at 10:10 AM