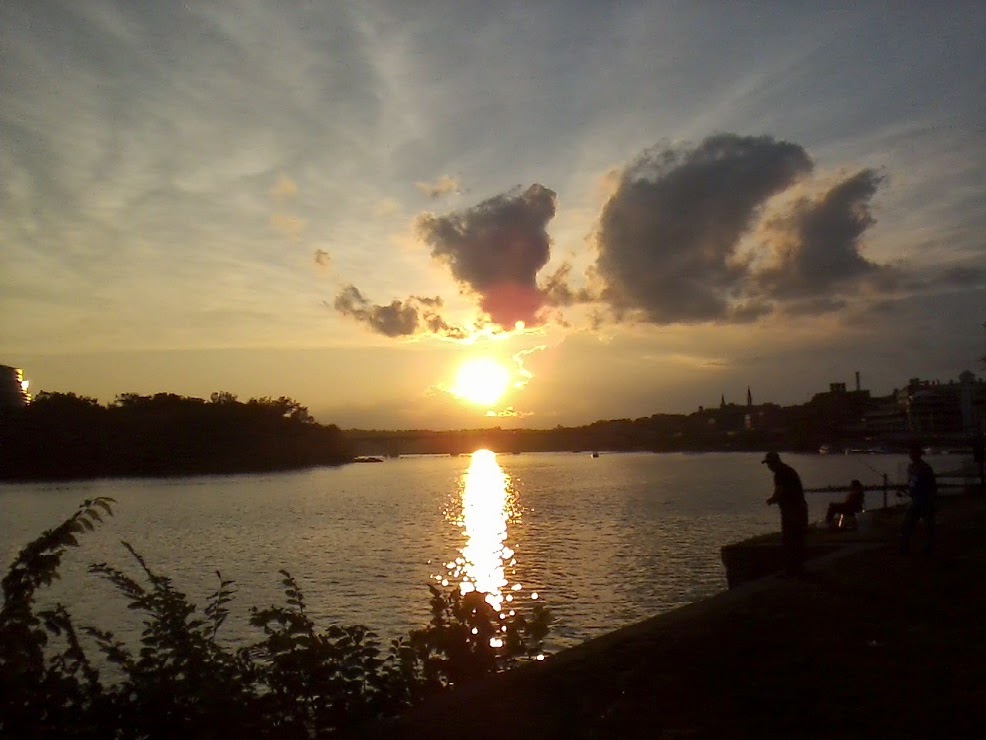 Stunning sunset as seen over the Potomac River near the Watergate complex looking upriver with Georgetown silhouetted on the right, Washington, D.C., 7:50PM Aug. 3, 2014.
*******


This entry features pictures from my roughly 12 mile bicycle ride last Sunday. I took the bike down to Huntington and more or less followed the same route that I took on a walk on June 29th that I intended to chronicle in a dedicated entry but instead broke up into a preliminary entry and a not-entirely thematically-related subsequent entry. 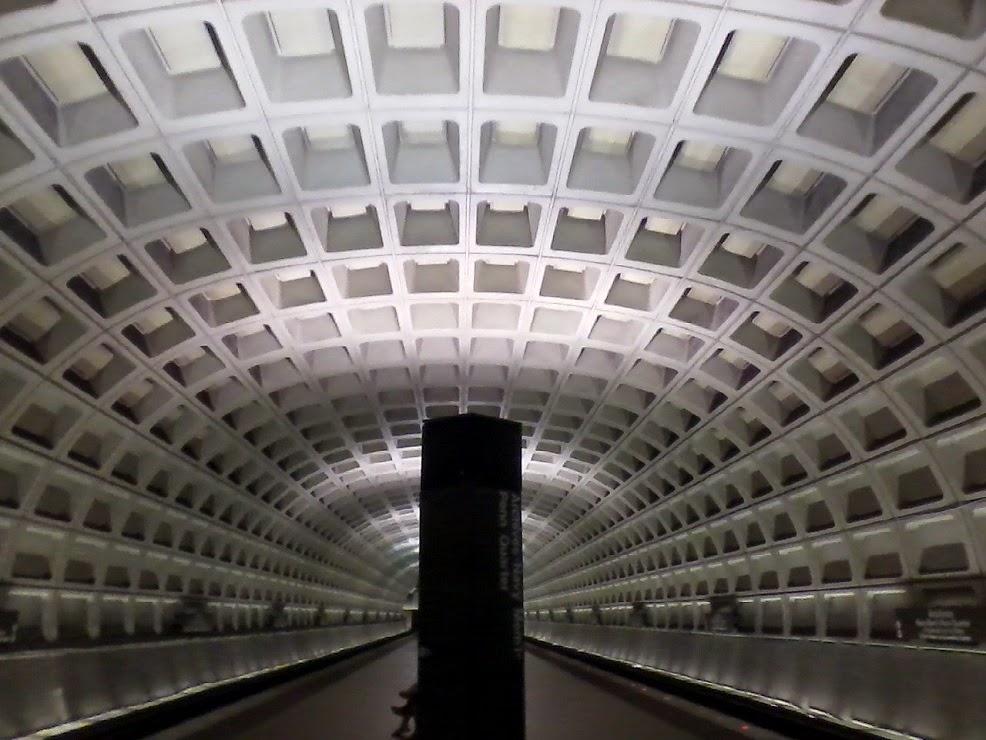 The Archives - Navy Memorial - Penn Quarter Metro station platform, Washington, D.C., 5:05PM Aug. 3, 2014.
I caught a Green Line Metro at Columbia Heights -- rather than U Street / Cardozo -- because I had to bike there to go to the Bank of America ATM. I then transferred to the Yellow Line at Archives to go to Huntington station.
*******


Unlike in that walking trek, though, I didn't take any Jones Point / South Cornerstone pictures and I biked all the way back to D.C. rather than just walking to National Airport and taking the Metro from there. Of course, I was on a bicycle, so I could go a lot farther. 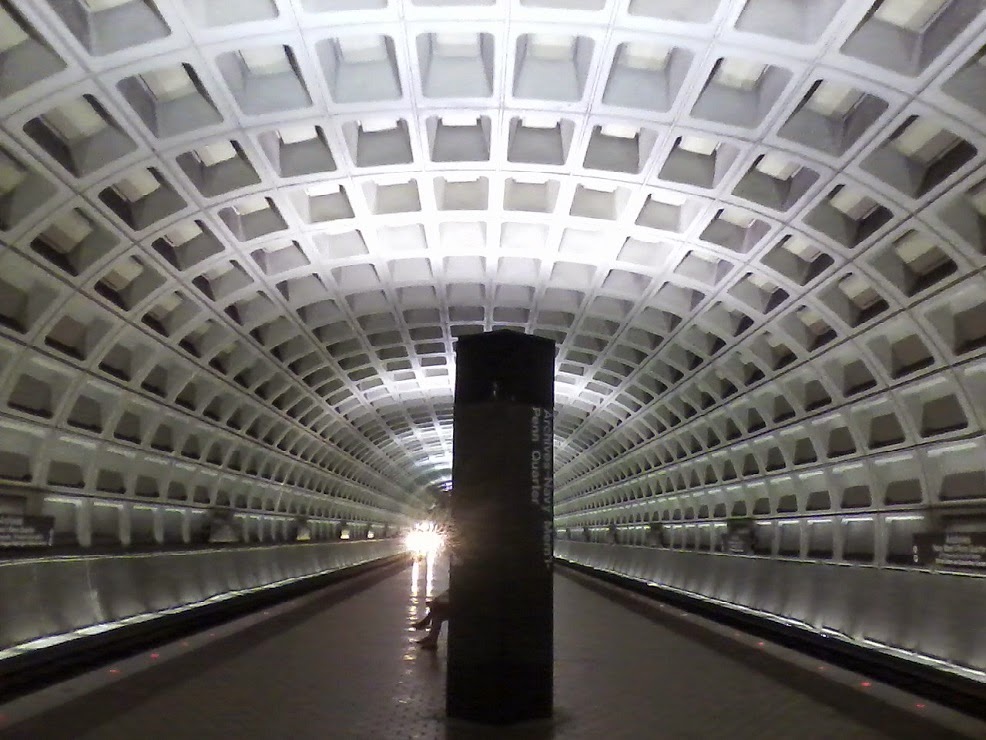 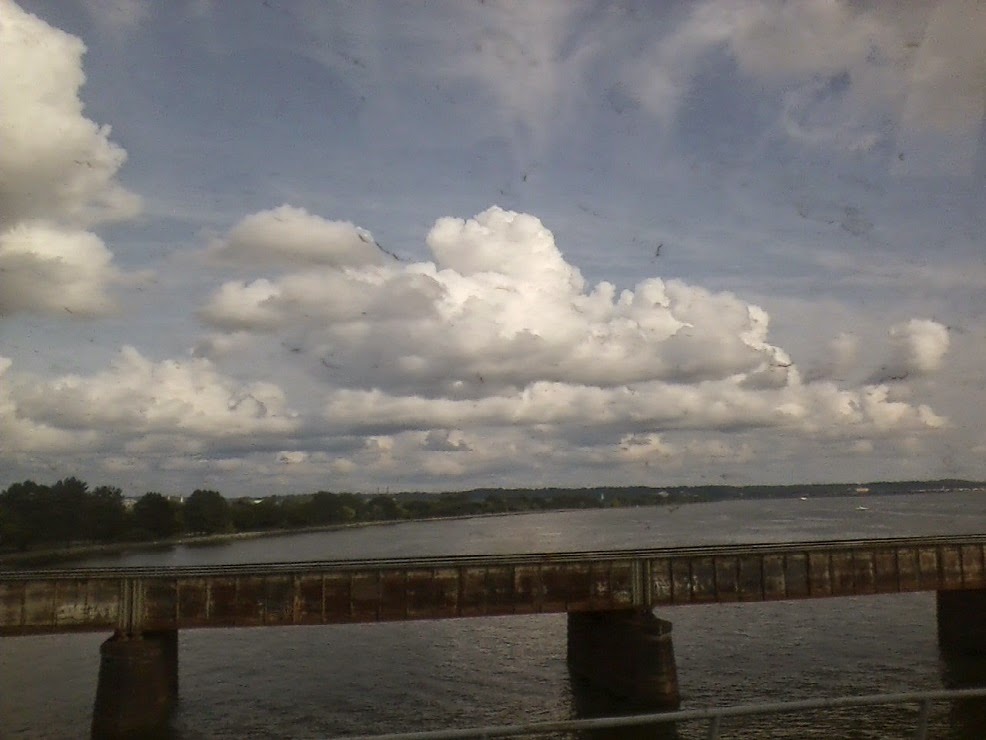 View of the Potomac River and East Potomac Park as well as the Amtrak / VRE / CSX freight line that spans the river, Washington, D.C., 5:10PM Aug. 3, 2014.
The various spans of the 14th Street Bridge are on the other "up river" side. The Potomac River is technically entirely within the District of Columbia and Maryland -- which has contributed to no end of battles over the decades and centuries between Maryland and Virginia and allowed for all kinds of illicit activities in the 19th Century "on" the river "in" the District of Columbia -- floating whorehouses and all.
******* 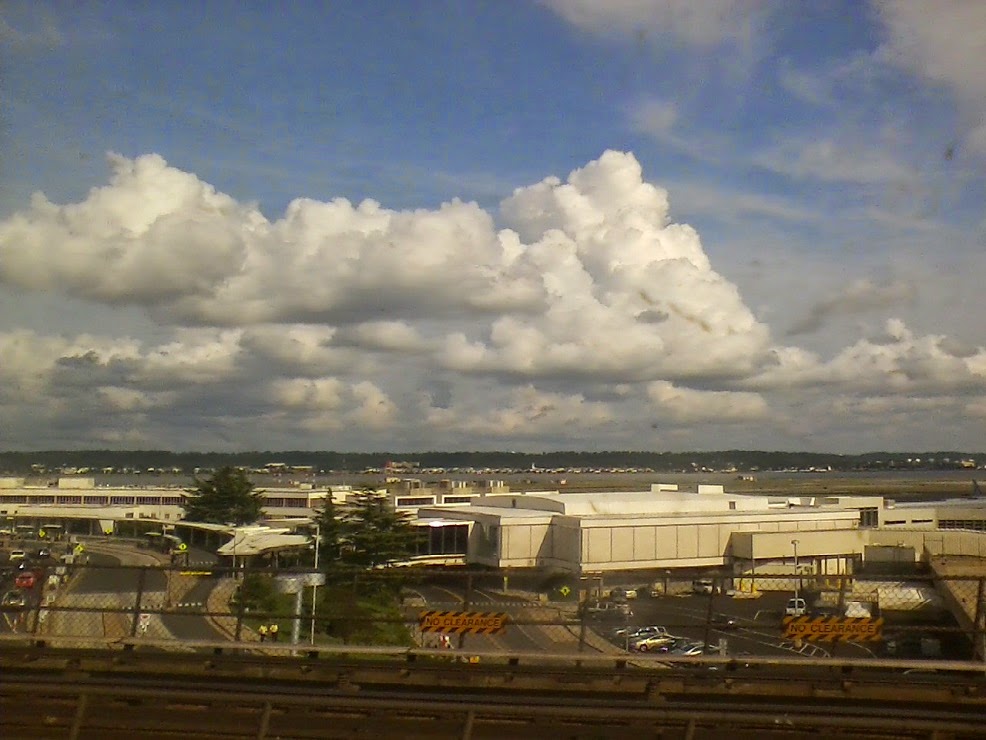 The view of Reagan Washington National Airport from the Metrorail, Arlington, Va., 5:18PM Aug. 3, 2014.
This is looking east. The "KDCA" climate station -- the "official" weather-measuring spot for Washington, D.C., in the present era, is at the far southeast corner of the airport right on the river at a spot called Hunter Point. It's a ridiculous location to do that.
*******


I reached Huntington Metro and, after a prolonged wait for the weird at-an-angle moving elevator there, I just took the bike onto the escalator. Then there was an issue with the fare machine eating my dollar, but the station manager worked some magic and put $4.35 on my card, which was really nice of him. 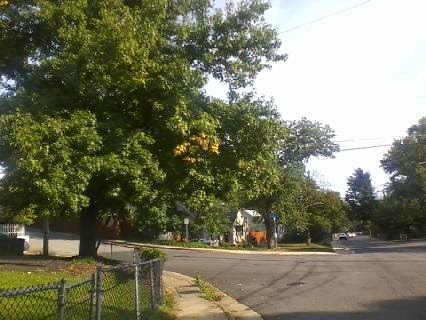 Fort Drive and Rixey Drive in unincorporated Fairfax County (although I think this area might be considered by the Post Office as Alexandria even though it isn't in the City of Alexandria), 5:46PM Aug. 3, 2014.
******* 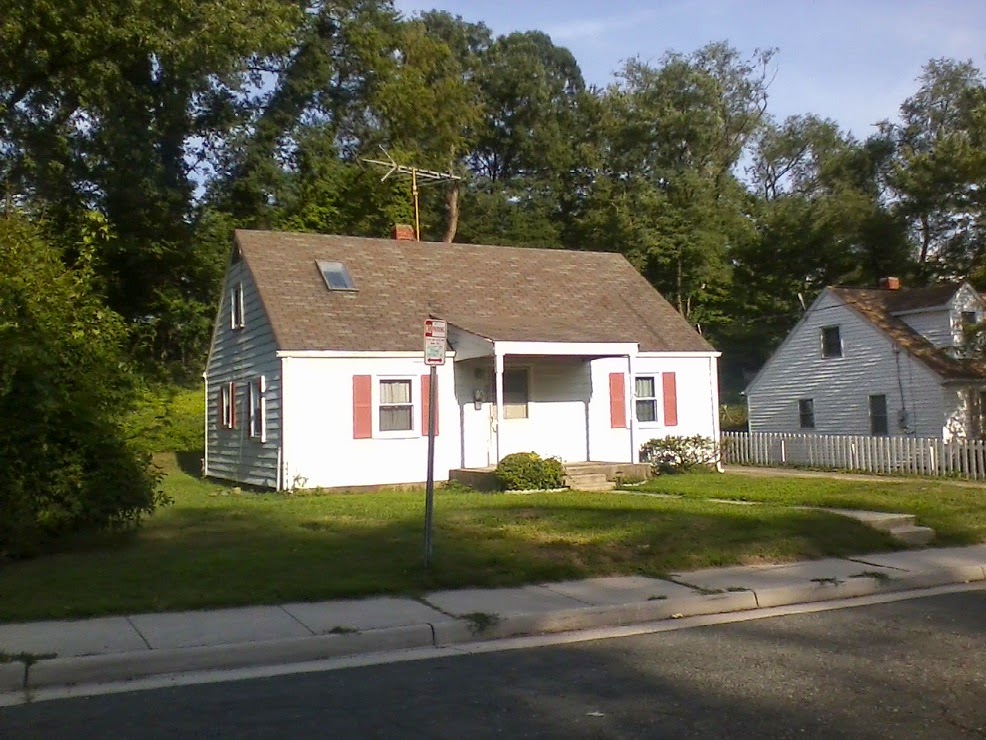 The house at 6017 Rixey Drive, Fairfax Co., Va., 5:47PM Aug. 3, 2014.
I featured this house in the follow-up entry (linked above). This house has intrigued me ever since I saw it the first time. (No, I wouldn't want to live there.)
To be clear, I rode my bike the same way that I walked -- with the hardest part the crossing of Rt. 1 / Richmond Highway. It is kind of a poor (semi-slum) suburban area. To get over to the Mount Vernon bicycle trail, you have to go through it, and then necessary to take Quander Road on a circuitous path to Harvard Drive, which then puts you into the Belle Haven neighborhood, which suddenly becomes quite wealthy. From there, it is a straight shot on Belle Haven Road to the bike trail.
******* 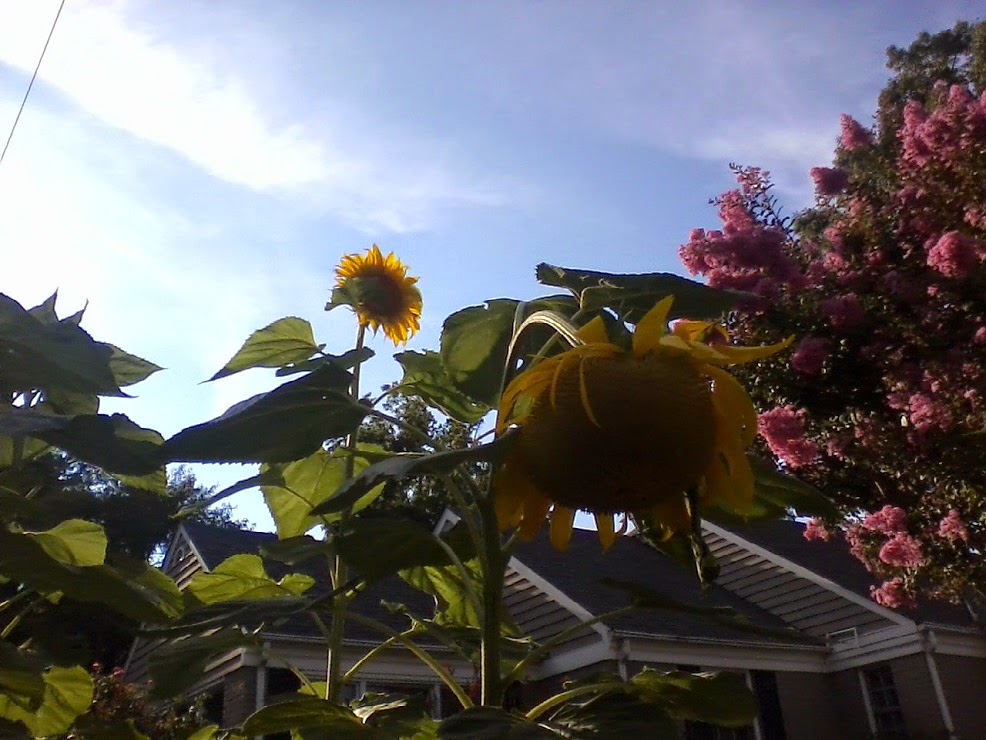 
A driving reason to go back to this place was to find what appears as a small circular park on my old ADC Washington, D.C., area street alas that I tried to find on my June 29th walk but could not.
I found it this time, and rather than a grassy circle, it turns out to be a rather forested circular patch that is called Fort Willard Historic Site (it doesn't quite seem to be a park). It is one of the old Civil War era Union Army encampments that surrounded the Federal enclave of the District of Columbia (although what is now the Arlington County part had already been retroceded by that point. These so-called Civil War Defenses of Washington today form the Fort Circle Parks system. Not all of them are actually run by the National Park Service. 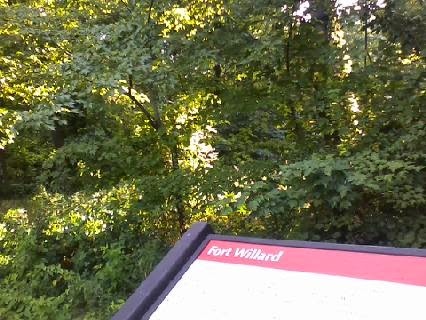 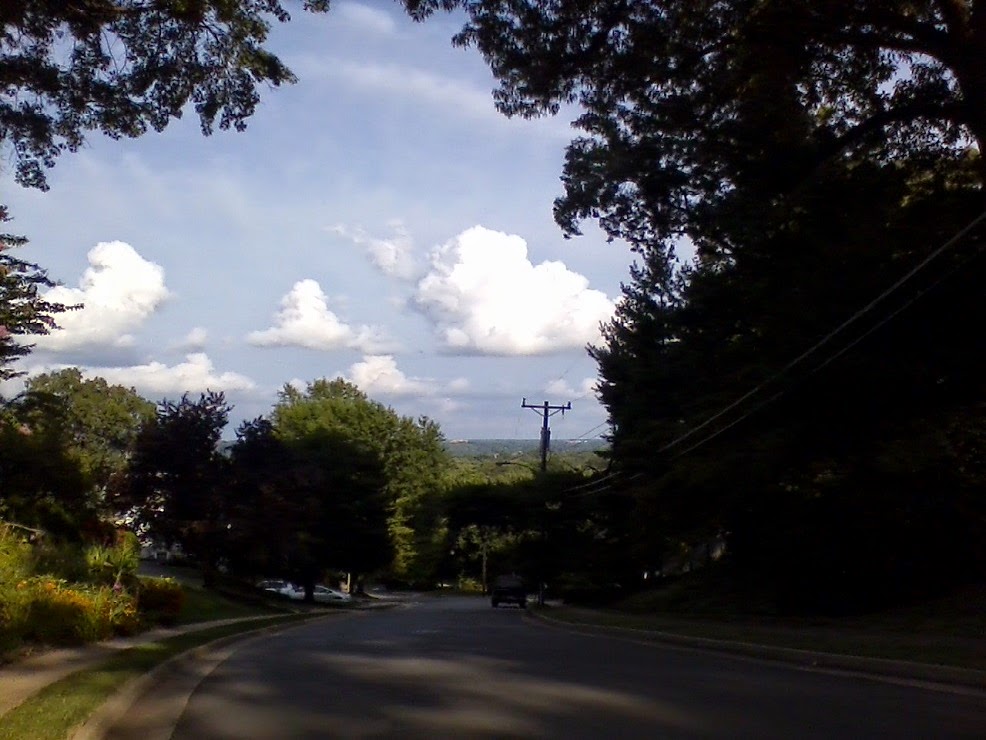 The view looking east "down" Belle Haven Road in Belle Haven (Alexandria), Va. You are actually looking into Prince George's County, Maryland in the distance there on the other side of the Potomac River.
*******


I then biked along the southern edge of the Belle Haven Country Club (where you will never find me) and across the George Washington Memorial Parkway (which is fairly easy to cross) and thence to the Mount Vernon Bike Trail along the Potomac River near the Dyke Marsh, which sounds like the kind of lesbian you won't want to mess with.
I biked up the trail to Alexandria and on the spur under the new Woodrow Wilson Bridge, detouring again to Jones Point and the South Cornerstone of the District of Columbia (Refer to my preliminary entry linked above.) This time, I actually read the sign there and it turns out that this boundary stone may actually be a circa 1794 replacement of the very original one in 1791. 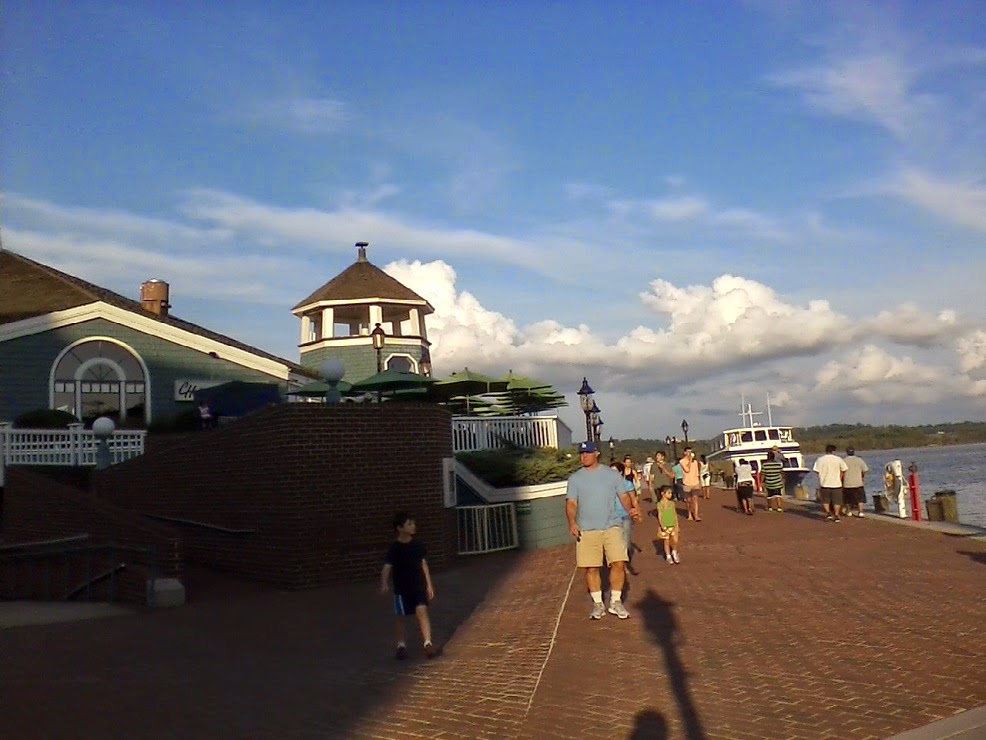 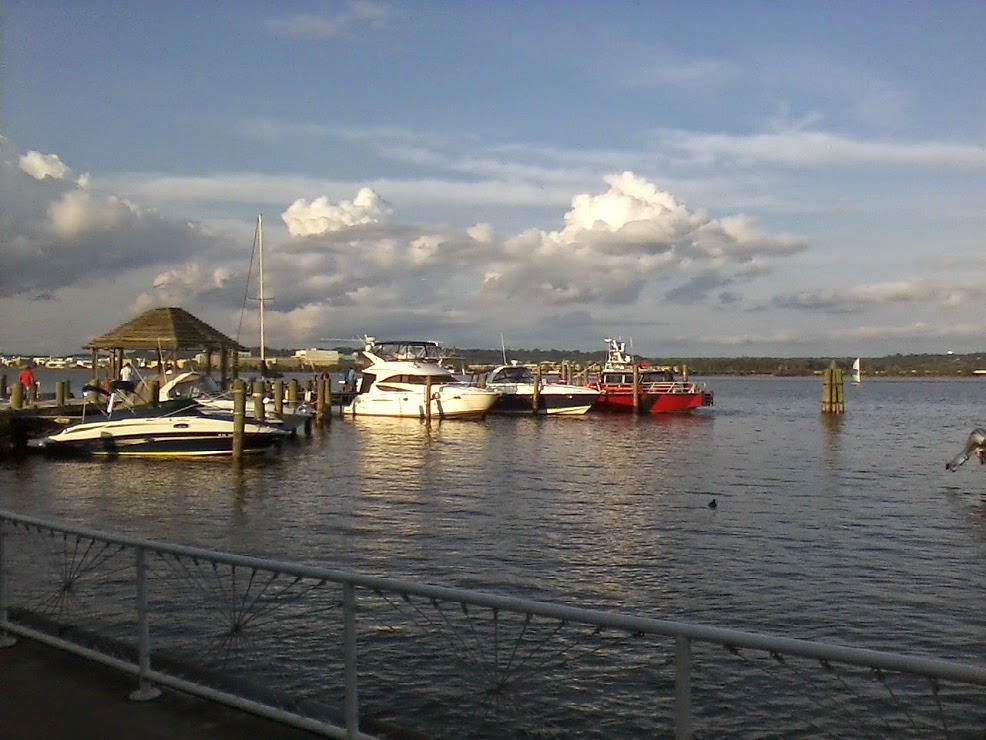 
I debated whether to get dinner in Old Town or keep biking and go to my destination of Chadwicks in Georgetown. I opted to do the latter and just kept riding up the Mount Vernon trail toward D.C. 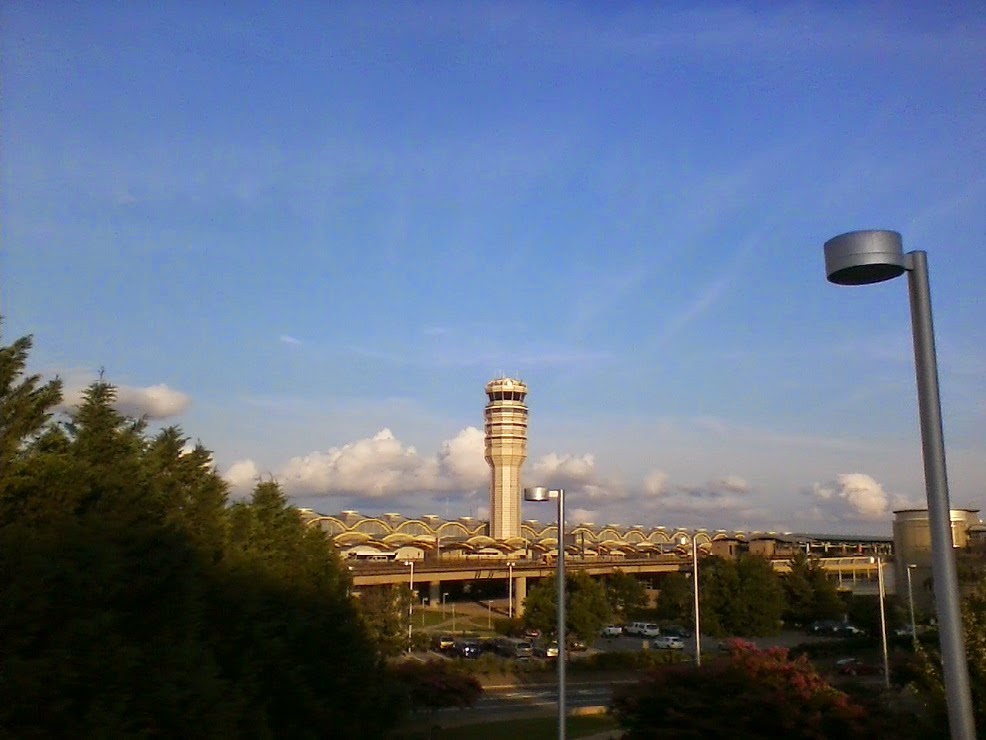 
It was getting close to sunset and the interplay of billowing clouds and low-angled sunlight in the pure, clean maritime tropical (mT) air mass in place was making for a spectacular evening. I was still ticked off that all the rain had missed us earlier -- as I recounted in this entry before the bike ride -- but it really was a lovely evening. 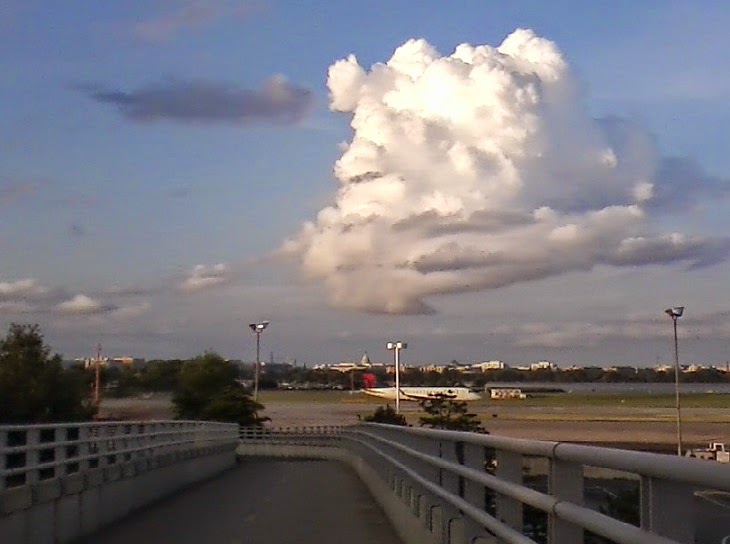 This is a somewhat cropped and blurry, low-resolution picture of what was a stunning sight: A towering cumulus cloud appearing to hover directly over the two-mile-distant U.S. Capitol dome as seen with the tarmac of National Airport in the foreground and, closer still, the Mount Vernon Bike Trail on one of its small bridges. Not only that but there was a jet taking off on the diagonal runway, which doesn't happen that often. This was at 7:21PM Aug. 3, 2014.
******* 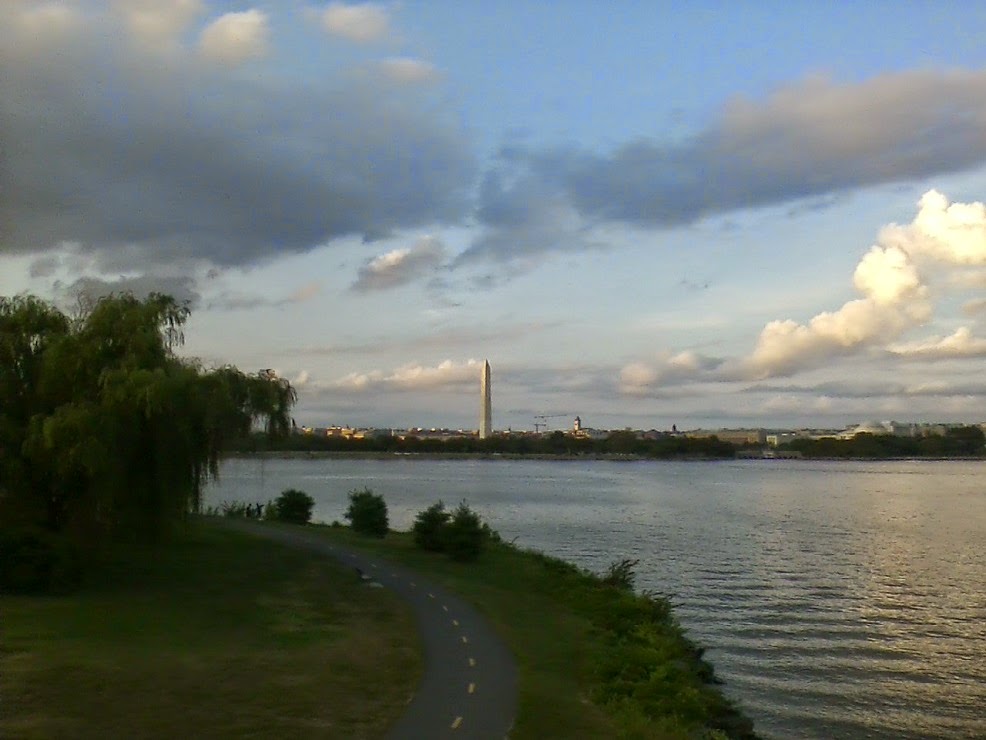 Riding along the Virginia / Arlington side of the Mount Vernon Bike Trail between the 14th Street Bridge and the Arlington Memorial Bridge with a view of the Potomac River and the Washington Monument, 7:34PM Aug. 3, 2014.
This is near the Columbia Island Marina and LBJ Memorial Grove where the bike trail and parkway goes over an ingress / egress to the Pentagon Lagoon Yacht Basin.
*******


I rode to the point on the trail where there is a spur that takes you (after carefully crossing the GW Parkway) to the Arlington Memorial Bridge to head back into D.C. (The next bridge upriver is the Theodore Roosevelt Bridge and the one after that is the (Francis Scott) Key Bridge. 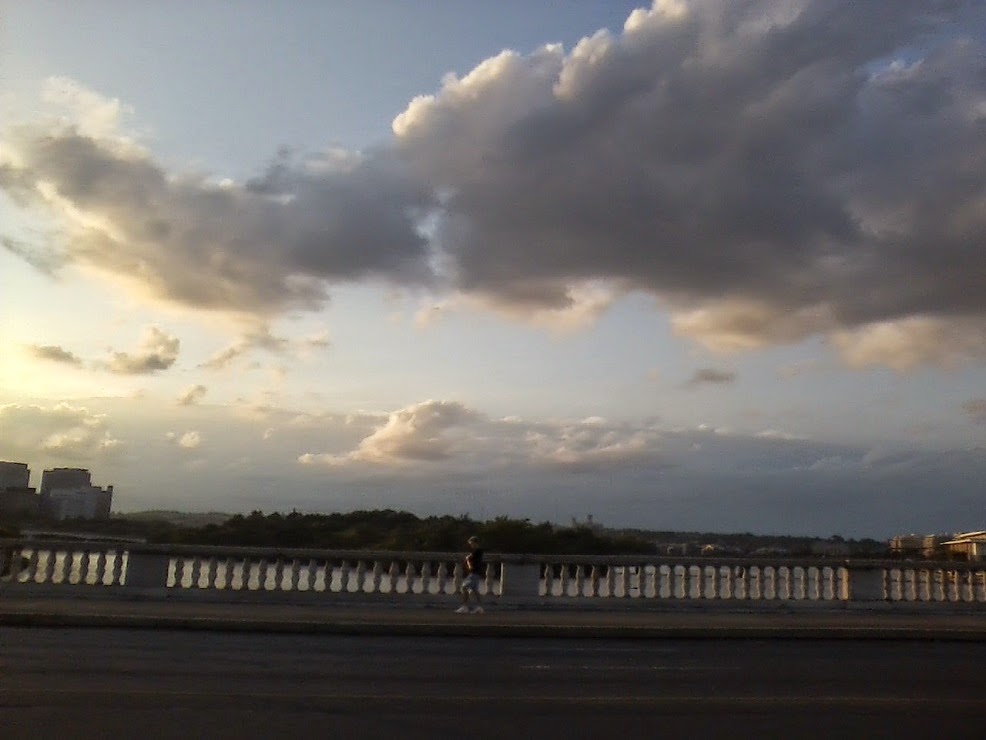 Crossing over the Arlington Memorial Bridge looking upriver with a cloud bank approaching, Washington, D.C., 7:40PM Aug. 3, 2014.
By this point, it looked as though there was some sort of distant thunderstorm approaching the D.C. area. The air was so clean and clear -- lacking the usual whitish, visibility-killing haze -- that you could easily see towering cumulus and cumulonimbus clouds 50 to 100 miles away.
We actually had a decent thunderstorm several hours later with 0.45" of rain at KDCA. KBWI had 0.53" while KIAD had 0.15" and KDMH had nothing that day.
******* 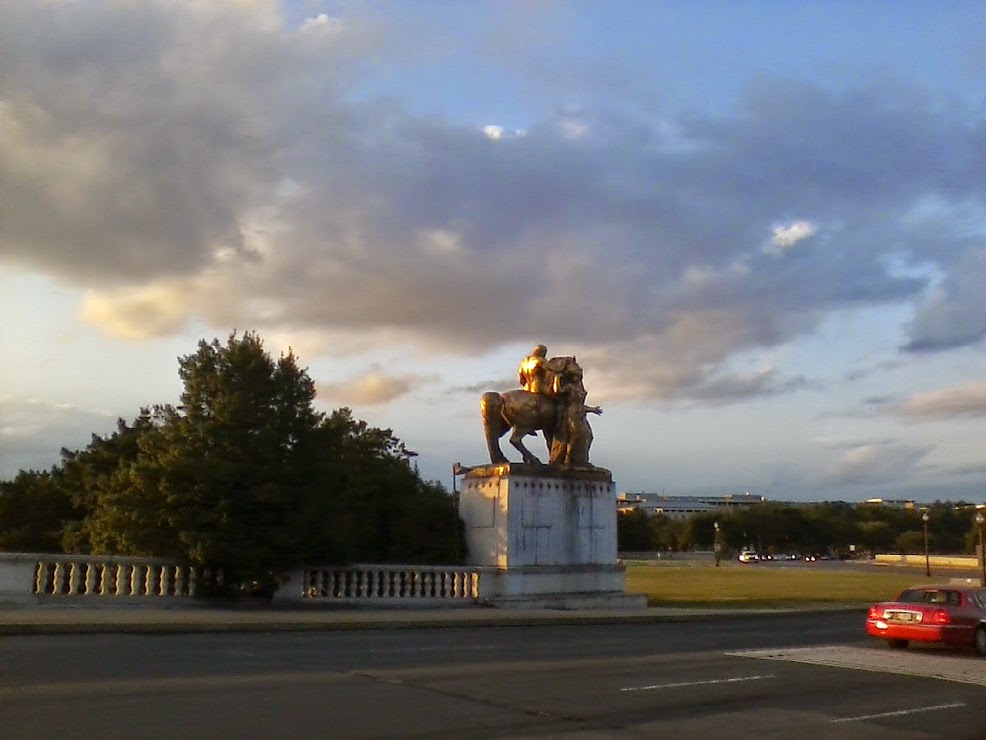 This is one of the two "Art of War" bronze equestrian sculptures that frame the Arlington Memorial Bridge on the side of Washington, D.C., 7:42PM Aug. 3, 2014.
UPDATED / CORRECTION 11:30PM 8/18/2014: I rode past this spot yesterday (Sunday, Aug. 17th) and confirmed that this particular Art of War sculpture (on the north side of the Arlington Memorial Bridge) is in fact "Sacrifice" rather than "Valor."
I think it is "Valor" rather than "Sacrifice." These two Art Deco sculptures were created by Leo Friedlander. Right next to them -- at the entrance to the Rock Creek and Potomac Parkway -- are the two "Art of Peace" sculptures in Neoclassical style, "Music and Harvest" (south side) and "Literature and Aspiration" (north side). These were sculpted by James Earle Fraser. I wrote about them in this entry.
Both the Arlington Memorial Bridge and the Rock Creek and Potomac Parkway are two adjacent "spokes" emanating from the traffic (semi-)circle that surrounds the Lincoln Memorial.
******* 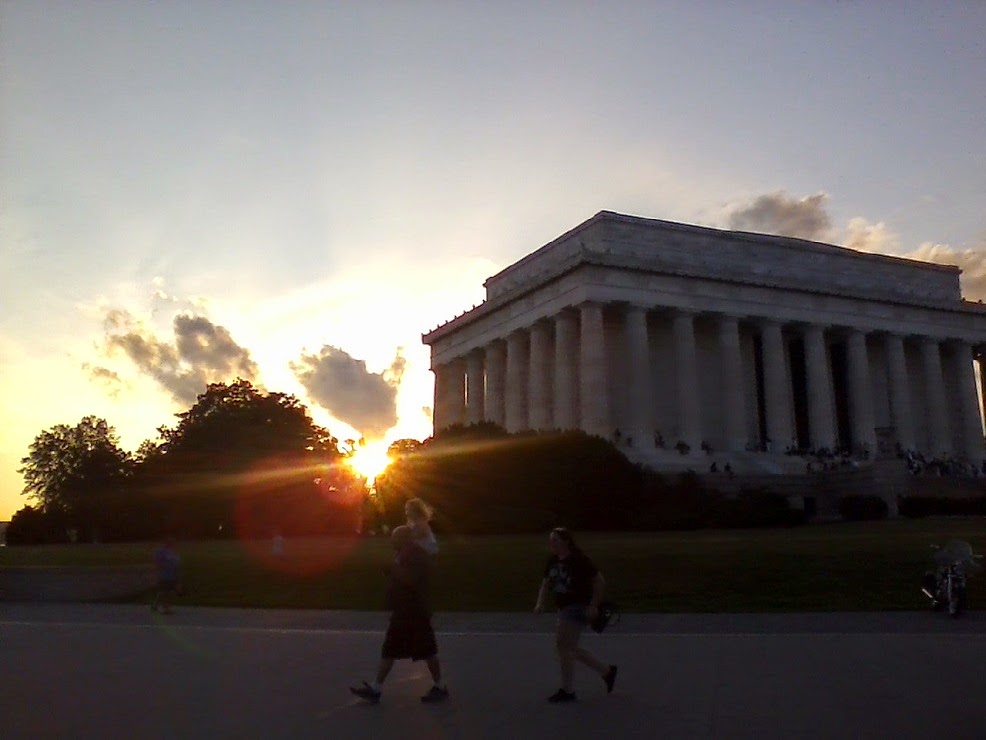 The Lincoln Memorial at sunset, Washington, D.C., 7:43PM Aug. 3, 2014.
Though right next to each other, the only safe way to get from the Arlington Memorial Bridge south side to the Rock Creek and Potomac Parkway south side can only be done -- due to the high volume of traffic -- by going all the way around the Lincoln Memorial.
******* 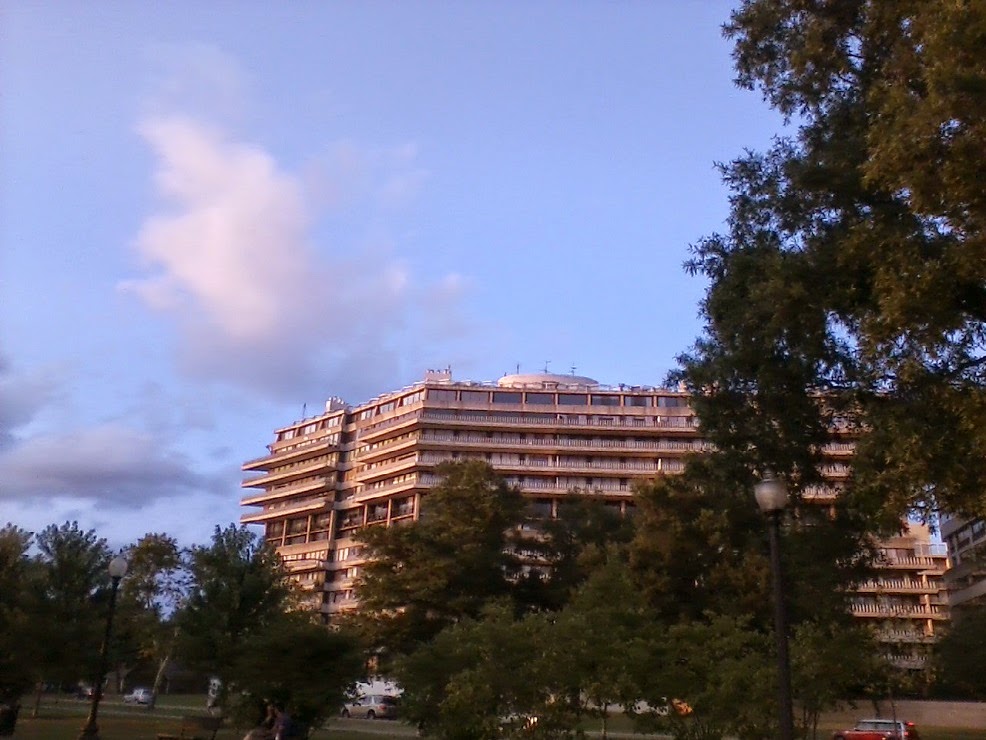 The Watergate -- actually, the Watergate Hotel and Office Building, one of the five main buildings of the storied complex -- Washington, D.C., 7:50PM Aug. 3, 2014.
The sky was that tropical - cerulean blue that makes for such stunning starry nights down in the tropics.
******* 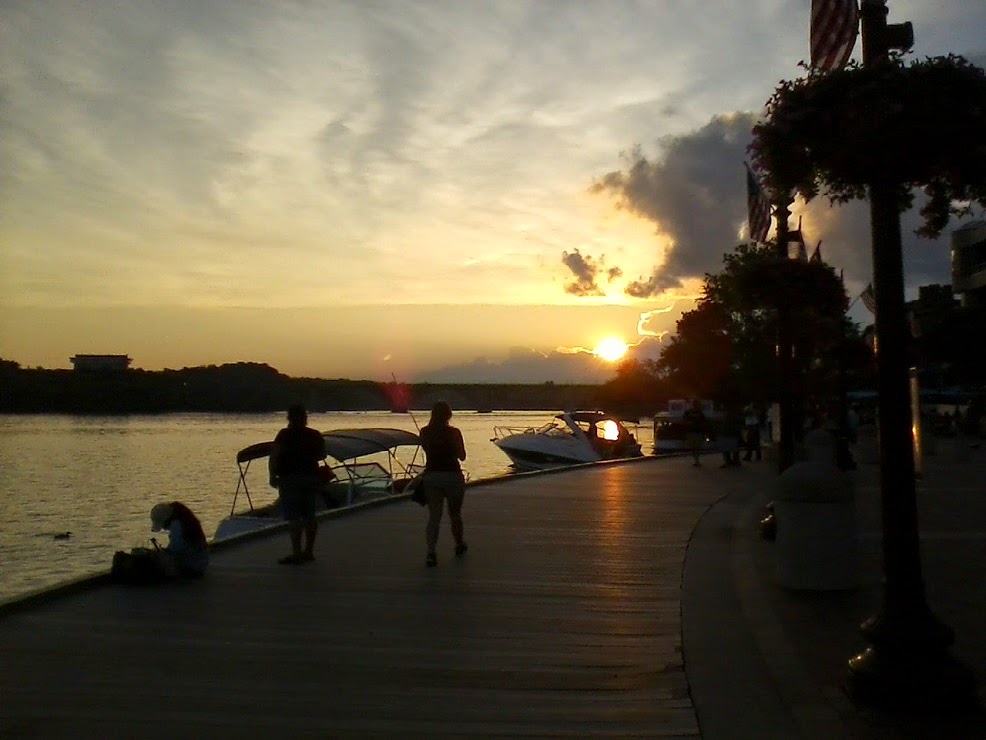 Sunset along the Potomac River in Georgetown at the Washington Harbour area, Washington, D.C., 7:53PM Aug. 3, 2014.
You have to walk your bike through there. I then locked it up nearby and went to Chadwicks, where I had dinner and a couple drinks before heading over to Larry's Lounge.
This concludes the Sunday bicycle ride photo-essay.
*******


Speaking of Chadwicks in Georgetown, I am supposed to go there with Gary tonight, provided we don't end up staying at Larry's Lounge too long.
OK, that's all for now.