After the August D.C. Area Rain and Before the Jersey "Shore to Please" Summer Pilgrimage 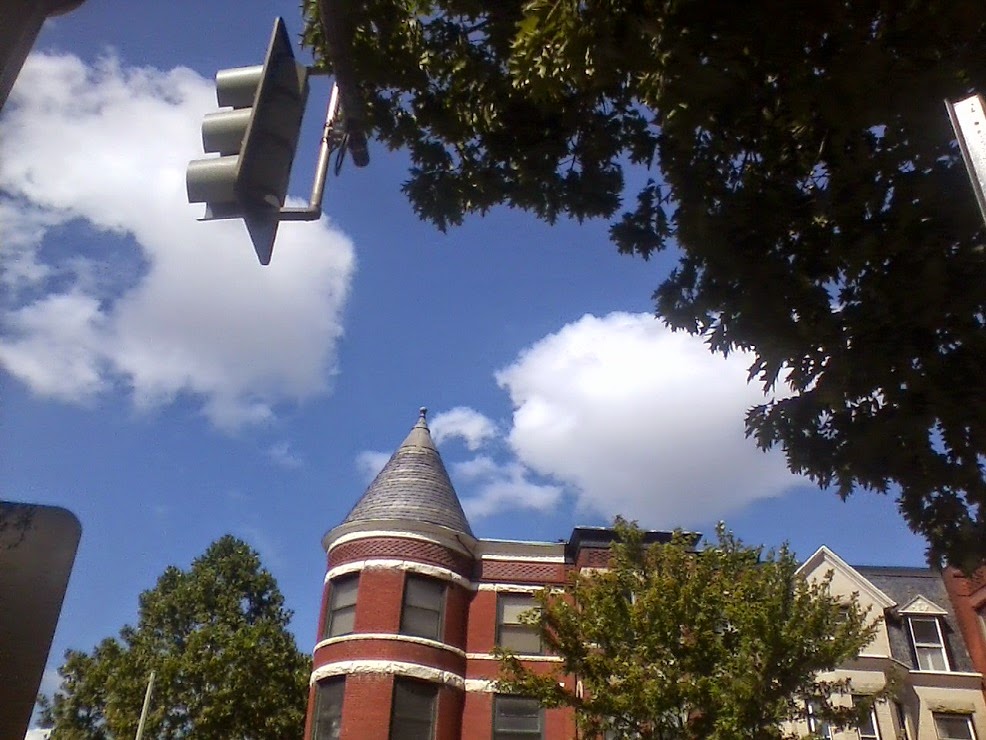 Puffy fair-weather cumulus clouds in a rain-washed cerulean sky over Washington, D.C., as seen over the turret of the corner house at 15th and U Streets NW, 10:58AM August 13, 2014.
It was a lovely day today -- especially given the time of year when it is so often so disgustingly hot and humid and the air gunky.
*******


I tried to write an entry discussing more details on the Baltimore / Washington area heavy rainfall event on Tuesday and a similar extreme event that occurred on Wednesday in New York in parts of Nassau and Suffolk County and centered on Long Island MacArthur Airport in Islip where a new 24-hour state record was set at 13.57 inches (and a calendar day daily / monthly / all-time record of 13.51 inches).
However, I'm really tired tonight and the entry just got too long -- with no where near enough available pictures. 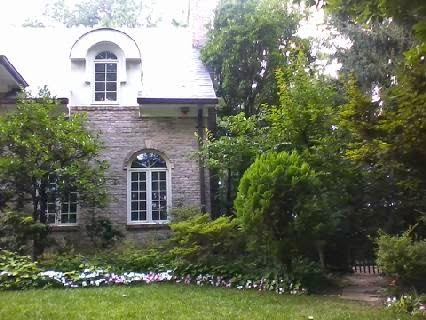 A house in the 5200 block of Moorland Lane, Bethesda, Md., 5:34PM August 10, 2014.
I took a short walk with Quill after our late lunch at Rock Bottom and before my bike back into D.C. via the Capital Crescent Trail and thence into Palisades and Georgetown.
*******


I'm tired tonight, though, because it's due to a rather good gym workout in its three-part fullness, namely, 6-mile jog, weightlifting, and a pleasant swim. That's the positive side. On the negative side, things remain highly uncertain at work and I run the very real risk of returning to non-billability next week, which is the kiss of death for any Federal contractor. 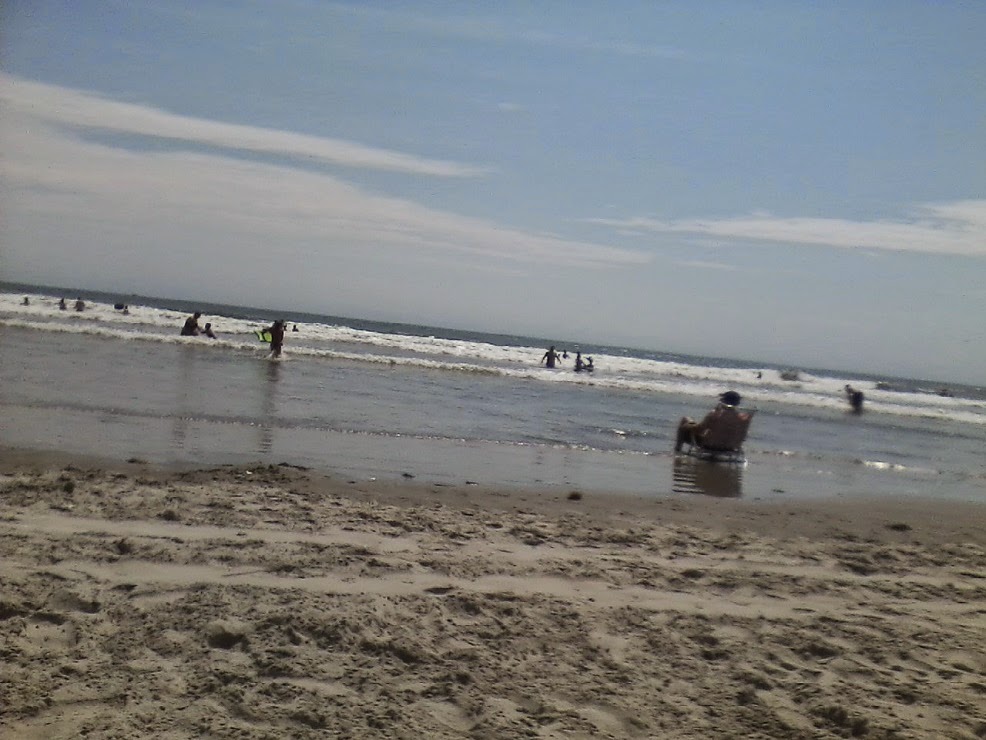 
However, my long-awaited 4-1/2 day trip to the Jersey shore (Wildwood and Cape May) -- via a brief Rehoboth stopover and thence the Cape May - Lewes ferry -- is slated to start on Aug. 22nd. It's an annual pilgrimage that I have done for 4 of the past 5 years with Gary and in some combination with LP and Wendy. 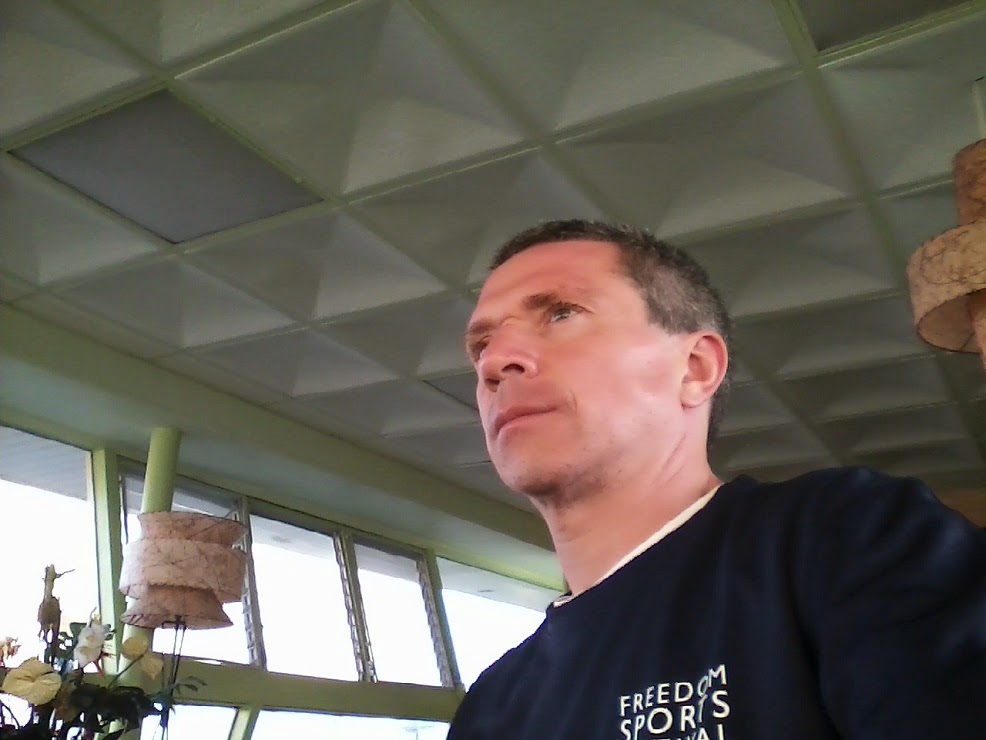 Yours truly in a weird upstairs commons room of the kitschy Caribbean Motel in Wildwood Crest, N.J., 7:07PM August 25, 2014.
We're not staying at the Caribbean this time but trying a new place on the Wildwood Crest / Wildwood boundary. The Caribbean was a bit too small with too much doo-wop and too many nosy families from Philadelphia.
We were on display to them as an admittedly rather odd D.C. quartet (we had the ONLY vehicle with D.C. tags that I saw), especially when we got back late all drunk and headed into a single room -- Gary, the everybody-loves-him attractive guy; Wendy, the-all-around-lovely young lady; LP, the-nerdy-older-uncle-like man; and myself, the leprechaun-like, indeterminate-aged man-child.
As DD said, all we needed was a dwarf in a tuxedo and we could have had our very own Fellini film, Jersey-shore style. Well, maybe I could wear the tuxedo. 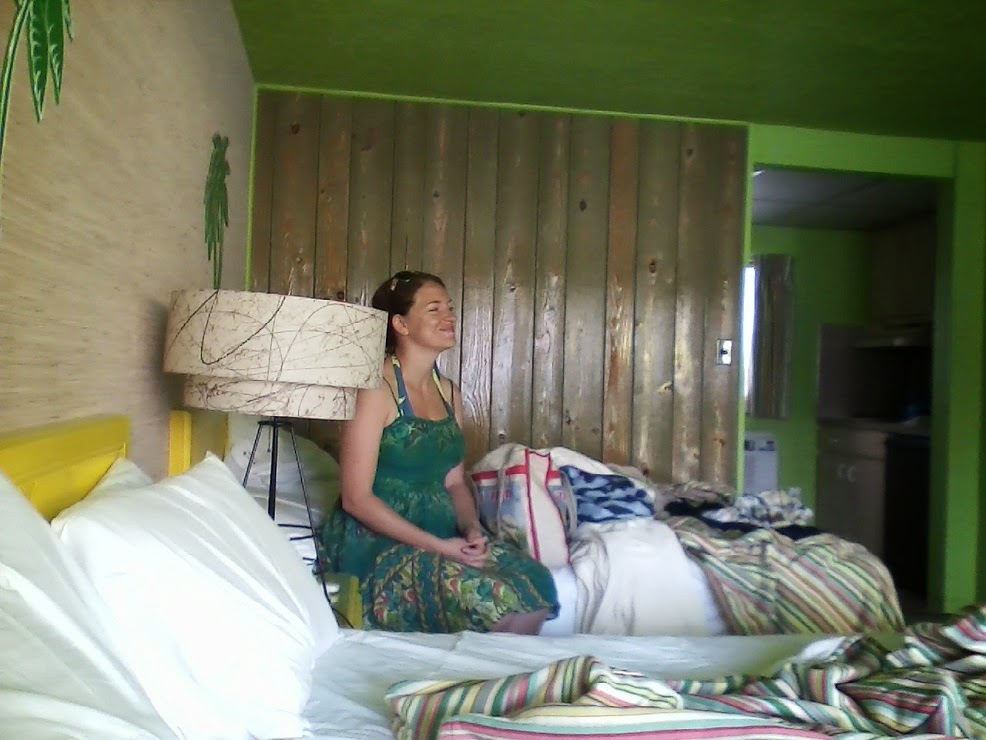 Wendy in the Caribbean Motel, Wildwood Crest, N.J., 9:54AM Aug. 25, 2014.
I just want everyone to appreciate this: Wendy in a kitschy motel on the Jersey Shore. This is a young lady who has traveled all over this planet from China to India to Syria to Yemen to Zanzibar; who is an immigration attorney who graduated from Georgetown University Law Center; and who speaks Arabic.
Yes, there were only two beds in the motel, and yes, she and I shared one. Now you can appreciate all the nosiness of all those Philadelphia working class families.
*******


Also next week, but before my scheduled Jersey shore trip, I might be taking care of my little angelic Brady if Chris in fact goes away for several days to visit his family (the trip is still a bit up in the air). 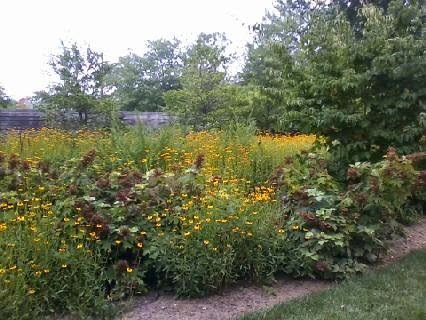 Black-eyed Susans growing thickly in a small, dedicated plot off a side street in Bethesda, Md., 5:53PM August 10, 2014.
It was appropriate to have them growing in suburban Maryland since they are the state flower of Maryland.
*******


I think tomorrow I'm going to ride by bike to work and then go to Larry's Lounge after work. I might not bring home the computer so my next update might not be until Friday.
-Regulus
Posted by Regulus at 2:18 AM