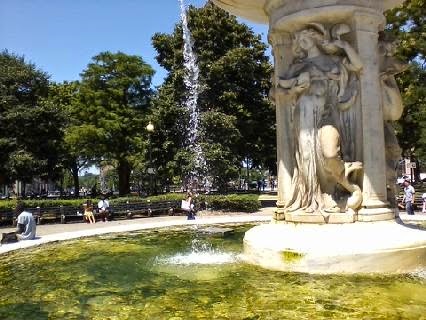 The central fountain at Dupont Circle, Washington, D.C., 12:21PM July 25, 2014. The water was clear and almost an emerald green -- and surprisingly not disgusting.
Not visible in this picture is just how mobbed the city was -- not just on the National Mall with the annoying, Metro escalator-clogging, overweight Middle American tourists but around Dupont Circle, too. People everywhere these days.
*******


So today was basically an unexpected off day from work. (I'll try to make up the hours over the weekend.) To be clear, I intended to go into the office -- and in fact, I did go -- but the entire internet / phone / file system was down when I got there and I was told that it was permissible to work from home. I took the opportunity to get my planned haircut (hours earlier than I originally thought) at the Hair Cuttery (Brittany wasn't there so Bea cut my hair). I went there after stopped at Panera at Dupont Circle for lunch and discovering its downstairs and surprisingly pleasant seating area.
But by the time I got home, I had one of my periodic migraine headaches and just didn't feel well. It was a non-aural one, though. However, I still managed to go to the YMCA gym late afternoon and did my Saturday routine instead on this Friday (except for the swimming part because the pool was closed for two hours and then when it opened and I was ready to go in, it got quite crowded). Oh, and I felt a lot better after the workout than at the start of it, when I thought I might faint from a light dizzy spell. 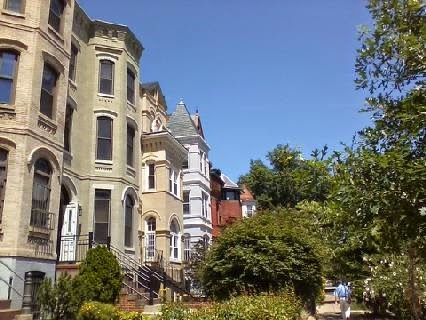 
I'm home now and was going to do my laundry -- again, another chore I typically do on Saturday evenings -- but it turns out that Jake and his family and Nick and his fiancé are meeting at Old Ebbitt Grill at 830PM in celebration of Jake's graduation from a graduate program. (I'm not even sure what it is in.) Earlier, I sort of tried to finagle an invitation, but I didn't think it would work. However, it apparently has, so lieu of doing my laundry and making dinner, I am going to "OEG" for dinner. I'll bike down there and then go to No. 9. These are two other activities I typically do on Saturday, as well.
I was at Larry's Lounge last night -- following the planned goodbye happy hour for AT at Zengo in Chinatown. Chris H. was working, and later on, I went to his place (with his keys he had given me) and brought Brady to the bar. But I also saw a fellow named Joe M. that I had not seen in at least a decade. He was with Bob and Aris. They were with another straight, married couple named Paula and Peter. Together, Bob, Joe, Paula, and Peter all worked years ago for Rep. Barney Frank (indeed, Peter was his chief of staff at one point).
The weather -- following a frontal passage yesterday that did not bring us any rain as all the precipitation stayed just south of here -- was excessively sunny today with nary a cloud in the sky. However, the temps were quite pleasant for "high summer" with a high at KDCA of only 83F and dew points around 53F. But the high is already offshore and a return flow has quickly set up. It should be warmer and much more humid tomorrow. And then on Sunday an out-of-season strong frontal system is progged to move through with possible heavy thunderstorms.
Tuesday is forecasted only to reach 77F here, about 11F below normal high for the day.
Updated 11:43AM 7/26/2014: The current forecast now has a high on Tuesday around 82F here is D.C., which, alas, is probably more realistic given the time of year, the part of the world, and the present-day climate situation. A high of only 77F in D.C. in late July is just very hard to achieve. End of update.
OK, that's all for now. I intend to update the blog tomorrow.
--Regulus
Posted by Regulus at 8:09 PM