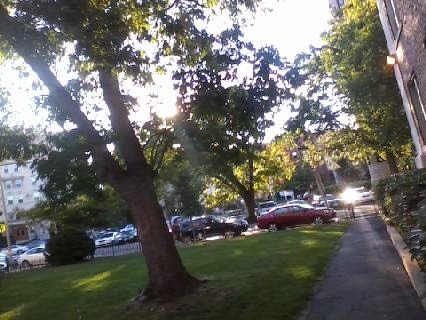 
I'm starting this entry at 12:30AM but I'm so tired and just can't post much of anything. Indeed, this is not the entry I intended to post. Right now, I'm watching -- or rather, thanks to my broken television, just listening to -- reruns of The Golden Girls. (My mom hinted that she might send me one of the spare TVs that she and Ray have. It's a 19" flat screen TV, which is just what I want.)
My work day was fine -- although things are still difficult at the job for a variety of reasons involving billability and even company finances though the latter should be resolved one way or another in a couple weeks. I then went to the gym after work and had a good three-part workout (jogging, weightlifting, and a short swim in the pool).
It's nice and important to recover from all the weekend excessive drinking and going out. 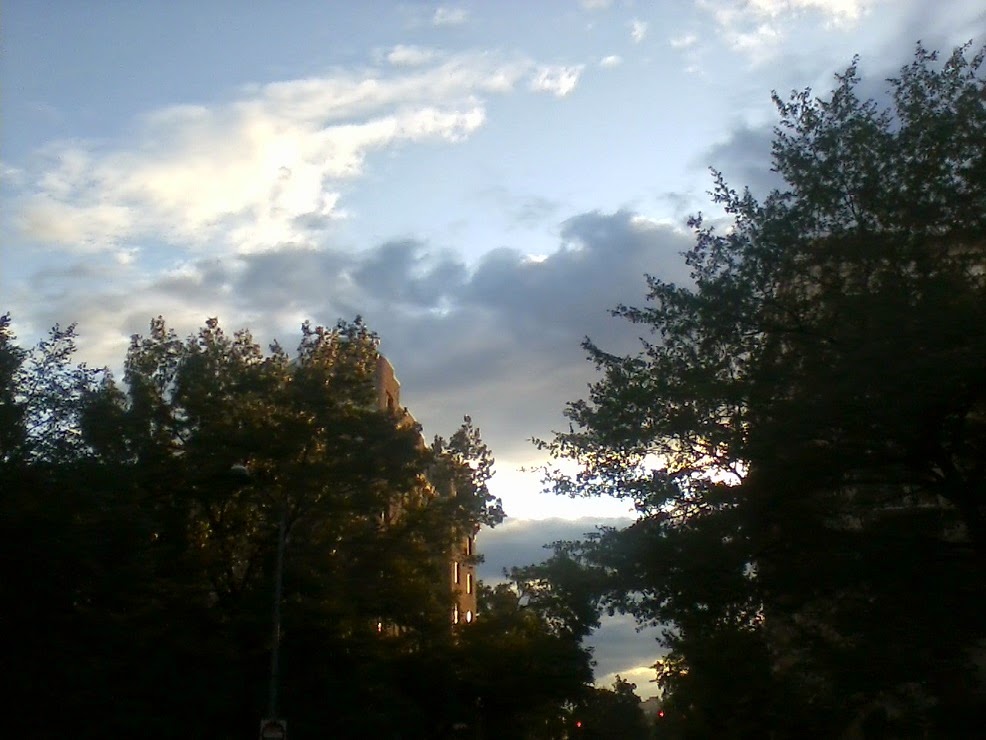 
The weather this Monday was quite spectacular -- and highly unusual for late July -- with a gusty northwesterly breeze and cerulean skies fleeced with out-of-season, highly picturesque cumulus and stratocumulus clouds. Temps. weren't especially cool -- it reached a high of 86F at KDCA and KBWI (2F and 1F below the normal daily high, respectively), although KIAD only reached 81F (-7F below the normal daily high).
Dew points were around 55F, so it wasn't exceptionally dry. It was the gusty northwesterly breeze that was odd. By nightfall, temps were dropping into the 65F range.
Having said that, check out this Capital Weather Gang entry, and note in particular the absurdly Photoshop (or otherwise) altered image that purports to show what a nice day it was, specifically, the blue sky and instability cumulus / stratocumulus clouds over a D.C. streetscape. It looks like a Thomas Kinkade painting -- as if he were doing a "Summer in Washington" series. 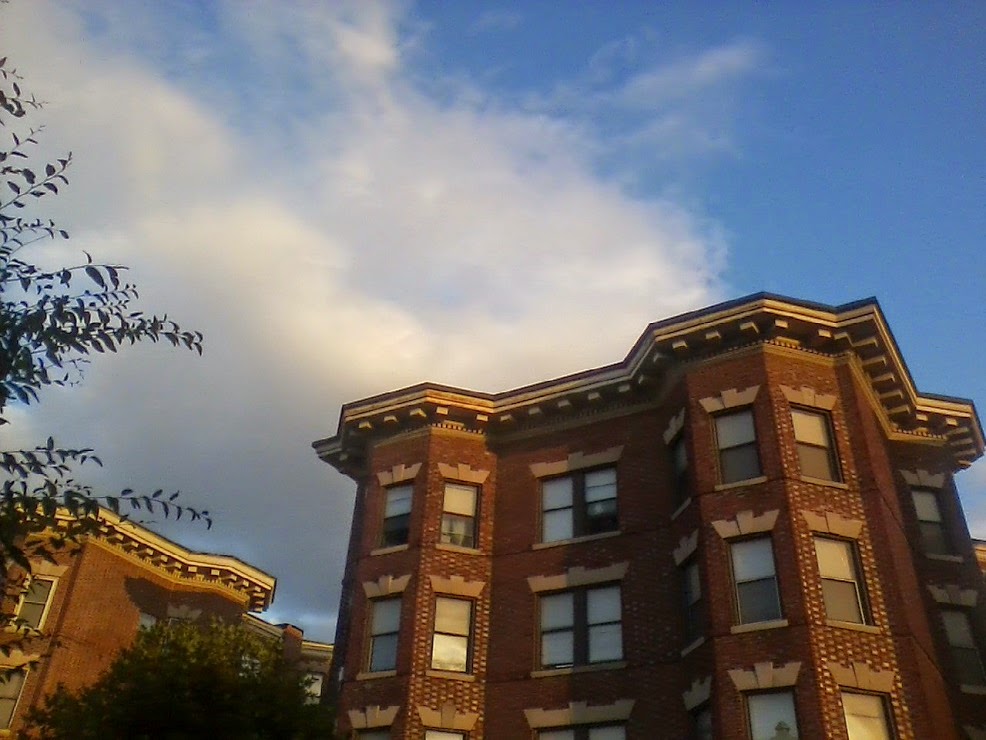 The evening sky over 1424 W Street NW, Washington, D.C., 7:39PM July 28, 2014.
I was walking to the YMCA when I took this. The 1424 W Street building is next to but does not appear to be part of the Capital Manor Cooperative complex in the 1400 block of W Street that creates the cheek-by-jowl juxtaposition of D.C. yuppie boomtown and Marion Barry-era Section 8 housing located next to the hulking, decrepit Frank Reeves Municipal Center.
*******


Tomorrow's high is (once again) forecasted to be only 78F or so -- which is really below normal -- and the overnight low as low as 60F even in the District proper.
We could use some additional rain but nothing meaningful is in the forecast. And we got screwed out of heavy rainfall that was originally forecasted to accompany the frontal passage, which turned out to be almost entirely not stormy. 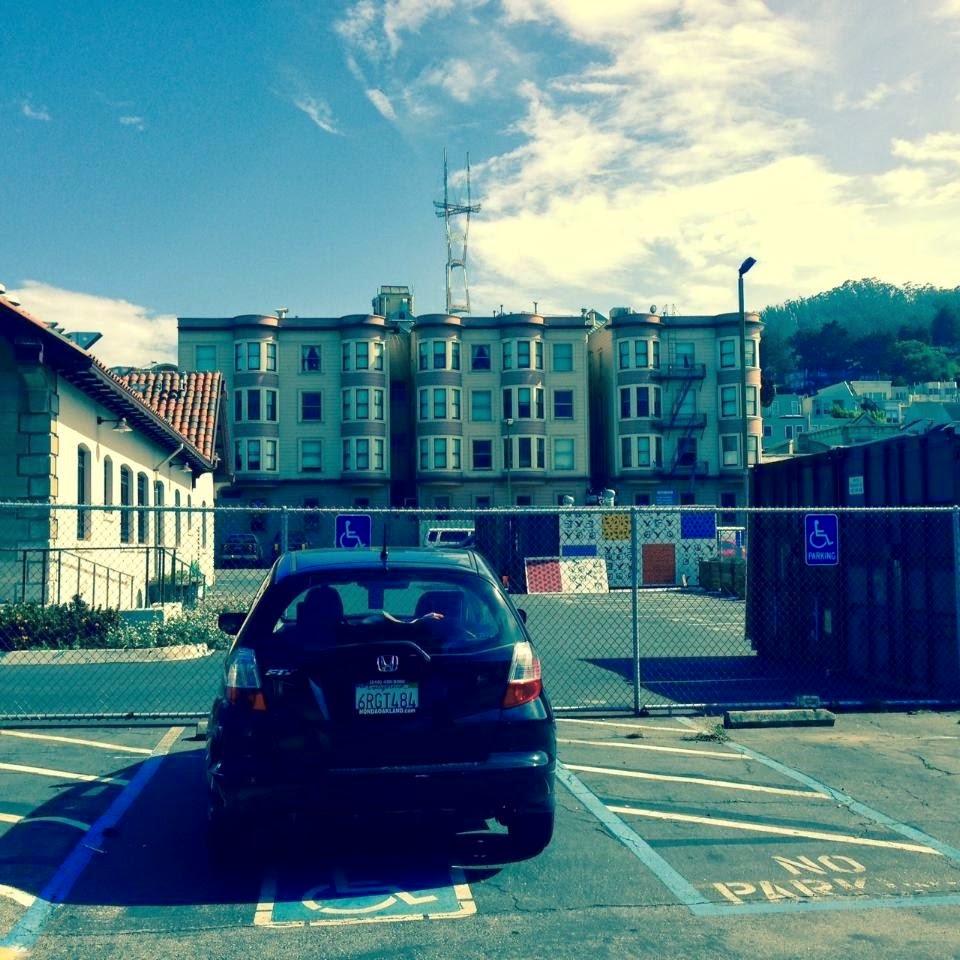 AT, who left the company last week and has already relocated in San Francisco and started her new job there, sent me this photo of the super-retro-looking Sutro Tower looming above the backside of her apartment building in the Cole Valley section of the city.
I told AT about the Sutro Tower and how she would probably be living near it given her Cole Valley location -- and this photo shows I was correct. However, unlike Wall-P, I'll refrain from any rapid-fire, "Eh. Eh. EhEheh. This again proves the superiority of my ways."
*******