This Gentile's Sabbath Visit to the DC-JCC and Uganda: The Good, Bad, and Money Laundered 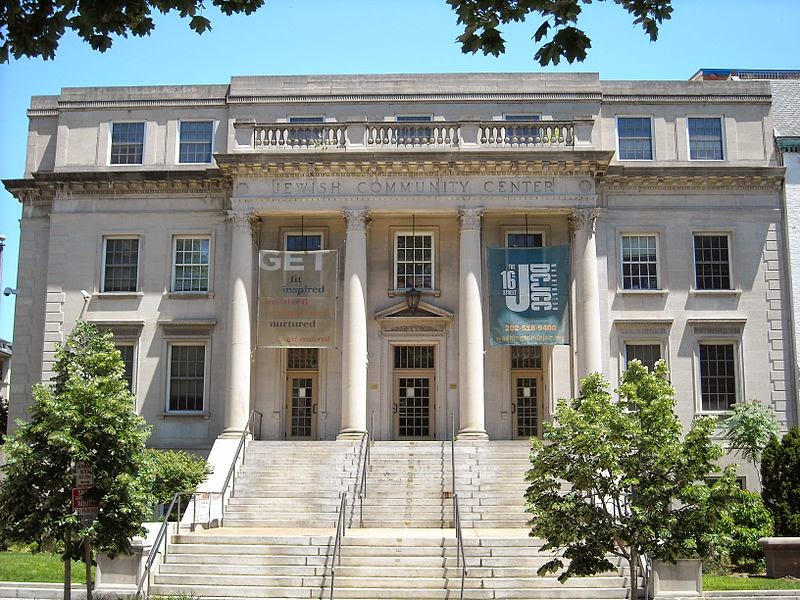 
I'm home at this 8PM hour following a brightly sunny, 88F hot, and moderately humid (63F dew point) late July day here in Washington, D.C. I didn't go to my regular gym today -- the Anthony Bowen YMCA -- but actually went with Gary to the Jewish Community Center of Washington, D.C., ("DCJCC" or just "JCC") nearby on 16th Street where his racquetball league regularly plays.
Gary said he never saw the JCC so empty on a Saturday as this one.
As for me, not being Jewish, I didn't think I could go much less be a member. I stand corrected. 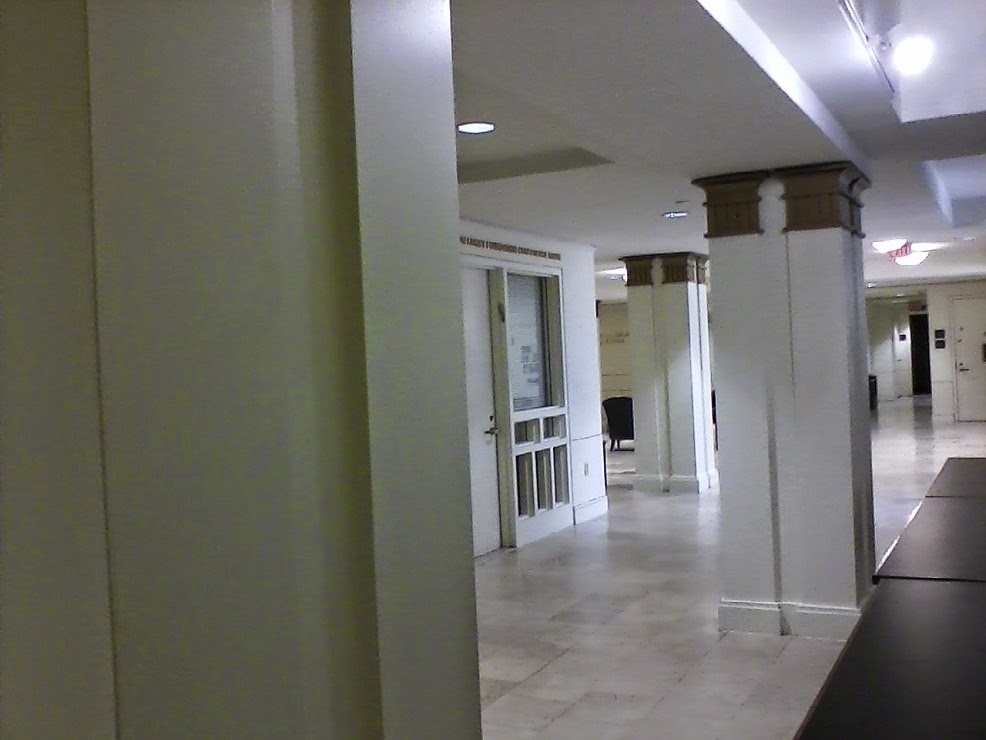 
Anyway, I had about a half hour workout -- no cardio, just weights -- and then went in the smallish, curiously old pool with its hard cement, undulating bottom and ancient-looking tiles. It's a strange little pool ranging about 20 meters in length, not more than 5 meters wide and ranging in depth from 3-1/2 feet to 5 feet. It was heated with the water probably about 82F.
There were all these small plastic toys in a plastic crate at one end of the pool, not to mention all kinds of warning signs (there are no lifeguards) and lots of life-saving and first aid equipment. A ventilation fan of some sort behind a door whirled away. There were two other people in the pool in the half hour I was there. 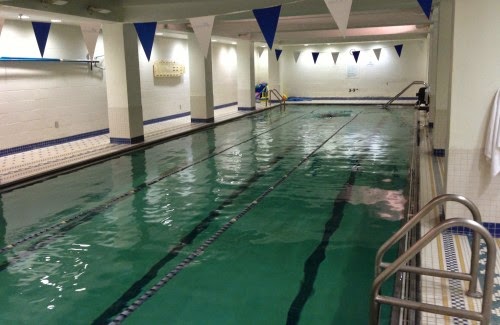 The indoor pool at the DCJCC in a picture I found online. During my visit today, as mentioned, there was far more "stuff" on and along the walls.
*******


Overall, the four-story JCC is the kind of place you could -- in fact, people do -- make into a multi-purpose social club that includes physical fitness, movies and plays, meals, and just kvetching about the outside world. Every room is named for a substantial donation made by Mr. & Mrs. Whoever, or alternatively, This or That Foundation.
I'm most intrigued that the place was there for so long, moved out in 1969 as D.C. fell apart back then, and then ultimately returned in 1995 as the city resurrected itself with the new JCC opening in January 1997. But the building itself cannot be wholly new -- it just looks too old in places including the gymnasium and aforementioned pool. 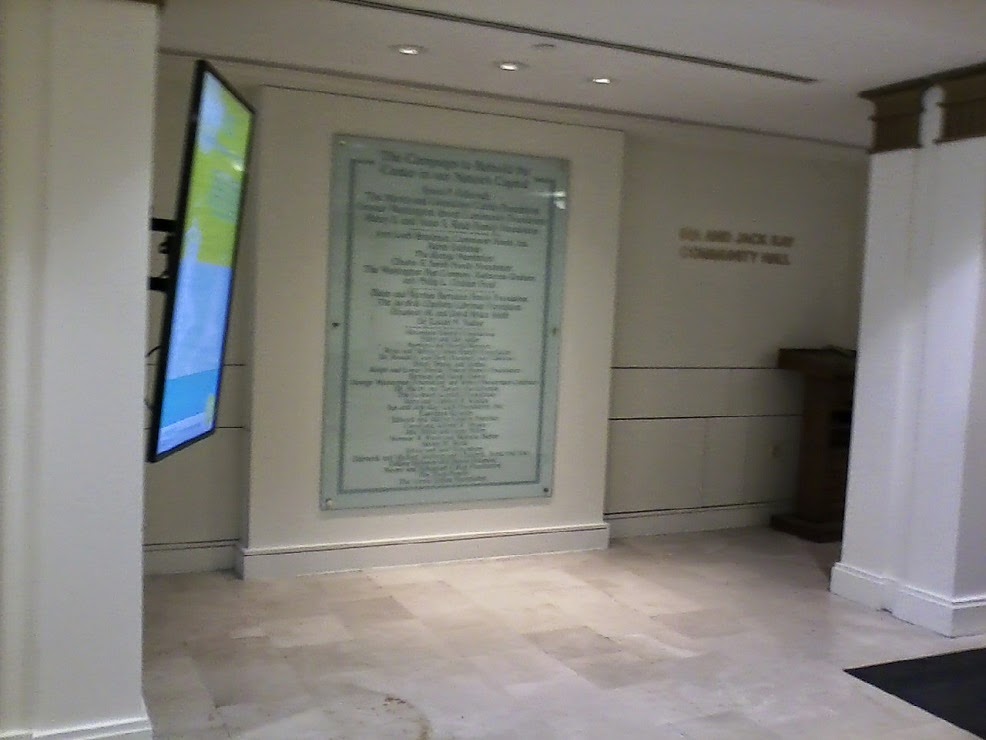 The lobby of the JCC with a large sign listing a roster of Who's Who and What's What in Washington, D.C., who had give money to the organization. This was taken at 5:02PM July 26, 2014.
The Graham Family Empire, specifically, the grande dame Katharine and the deeply-troubled Philip of The WaHoPo publishing empire had their names on that plaque.
*******


Last night, I had in the end a nice time at Old Ebbitt Grill at dinner with Jake, his mom and sister (visiting from Indiana), Nick and Luana, another fellow named Dan (see below) and myself.
While I spent too much money, this was mostly I had three drinks at dinner and then at the Old Bar with Dan, who is part of the Tuesday "TNDC" crowd. He gave me one of the two 1,000 Ugandan Shilling currency notes that he brought back from Uganda and had with him.
As an aside, I inadvertently ended up washing the bill when I did my laundry earlier. Except for being wrinkled it survived quite well ... 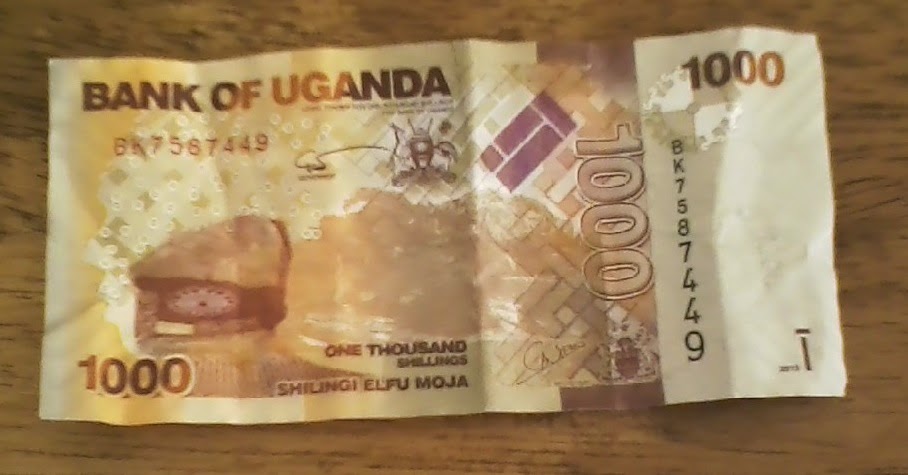 
Dan was in Kenya and Uganda helping set up the necessary support infrastructure for the smartphone-based mobile banking that has become so popular there and across sub-Saharan Africa. Indeed, much of Africa is undergoing a "mobile revolution" major transformation in all kinds of sectors.
This is a very good thing. Africa needs more good things. 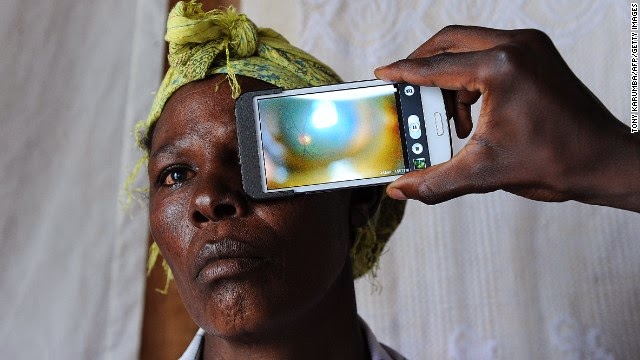 A woman in rural Kenya gets an eye exam using a smartphone with an application that can perform ophthalmological analysis.
*******


Uganda sounds quite interesting -- except for that rabid kill-all-the-gays homophobic thing. However, that seems to be as much a legacy of American fundamentalist Protestant screwing around as anything else.
As for Dan, he is actually an Iraqi American Jew with family connections to Israel, and naturally, we talked about the situation in Gaza and the larger Israeli-Palestinian issue while having a few drinks at the Old Bar. Also, since it all seemed kind of relevant, I tried to explain to him what was the "Raid on Entebbe," which I'm actually old enough to remember hearing in the news. 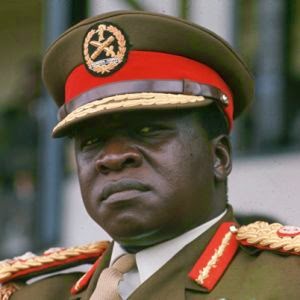 I also tried to explain my dad's joke from the mid-1970s that he thought was so hilarious back then:

"My name is Idi Amin. I love Americans. I had two for lunch today."


As a weird aside, I was actually in New York City in August 2003 when the news arrived that Amin had died -- and what's more,  I discovered it on that electronic news ticker "zipper" at Times Square.
Thereafter, I biked back home by 1AM, nixing the idea of going elsewhere. I biked to Nellie's but it was just too mobbed with a line out the door. And the streets were overloaded with young, drunk people gadding about -- including on the side streets. 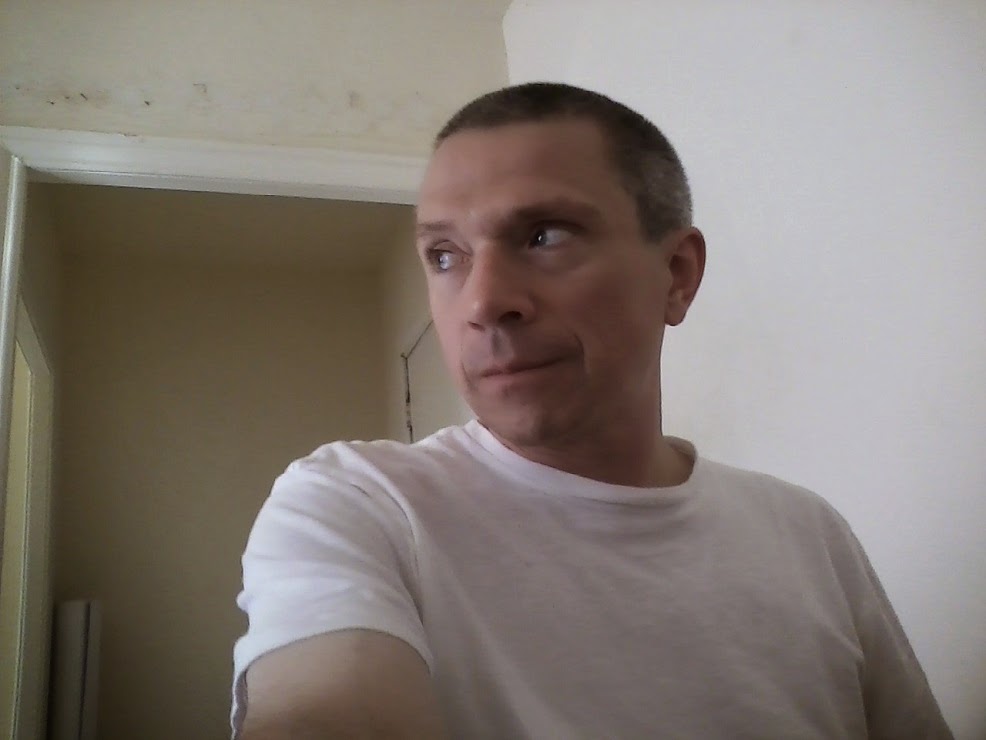 
Tonight, I'll probably go to Larry's Lounge since Chris H. is supposed to be working there. As for tomorrow, I want to take a bike ride on the W&OD Trail -- starting nearest to the new Wiehle - Reston East Silver Line terminus station. The first portion of the Silver Line opened today.
Lastly, I intend to post a political-themed entry with some good reads from Paul Krugman and Andrew Sullivan, among others, but that might not be until tomorrow. 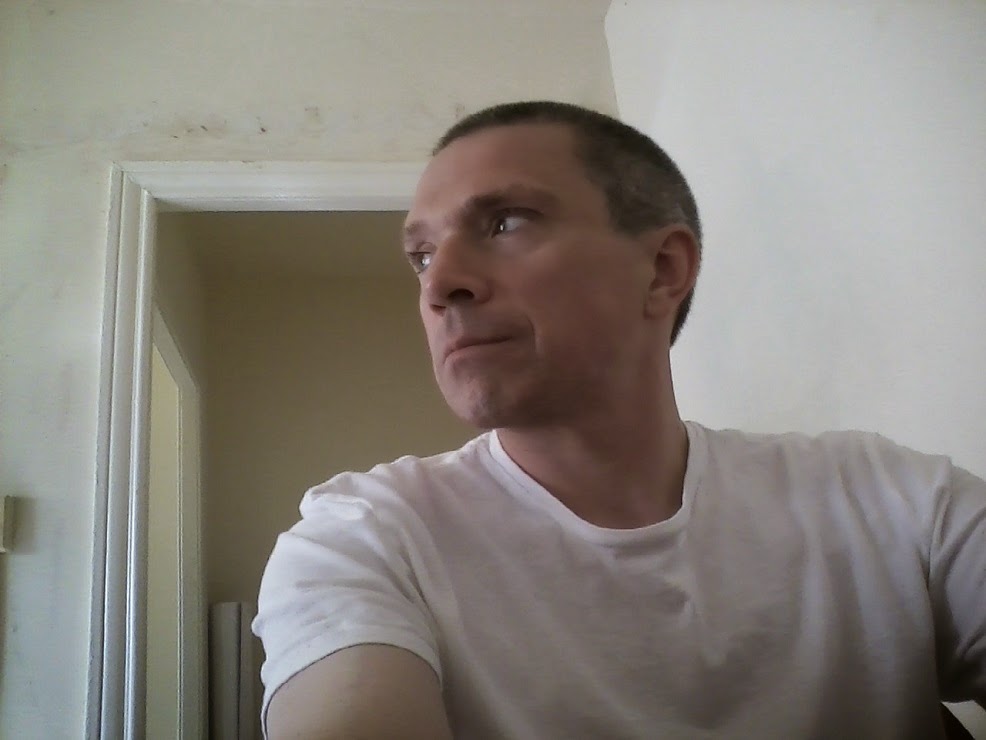 Hey Richard! Tena told me about your blog and I had to check it out. I have been thinking of you a lot lately and wondering how you are doing. I hope you are well. My cell # is 443-883-6371 and my email is Motiram@gmail.com if you want to get in touch.

Take care. I hope we can talk soon.

Thank you for visiting my blog. I saw this comment in this entry from last July, though it looks like you posted it just today, so I don't think I missed it.

I will send you an email tomorrow (Monday).