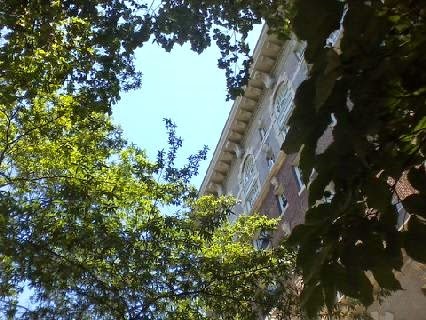 A glimpse of the Northumberland building seen through leafy green trees on a pleasant summer day, 2039 New Hampshire Avenue NW, Washington, D.C., 2:30PM July 5, 2014.
I was walking to the gym when I took this picture.
*******


Tonight, I was walking home tonight from the gym on the short way along W Street to New Hampshire Avenue. It was a cloudy, slightly cooler night following an early deluge that dropped over 1" of rain officially at KDCA (corrected amount: 1.31"). (Of note, this is the second time this week that KDCA had the rainfall jackpot of the four main regional civilian climate stations.) 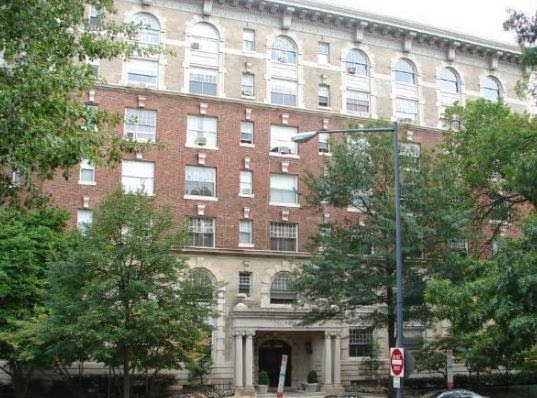 The Northumberland in an undated summertime photograph I found online.
*******


There was this fellow who I see frequently at the gym (usually in the pool) who was walking the same way. We were near my building but he turned to go into the next door building called the Northumberland. Walking in this direction, it is just before my apartment building, the Hampton Courts. Both are in the 2000 block of New Hampshire Avenue NW toward the western edge of the larger Shaw neighborhood, although the "U Street Corridor" is another name for this portion of it. 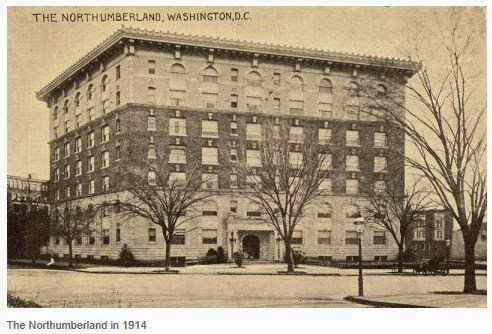 The Northumberland as it appeared 100 years ago in 1914 when it was still quite new. This is the view from V Street looking west with New Hampshire Avenue -- onto which it fronts -- cutting at a diagonal to the alphanumeric street grid. My building -- the Hampton Courts -- that is now on the right side of it had not yet been built when this photograph was taken. And I'm sure the photographer is long dead.
*******


The Northumberland is an ornate and stately building - it is understandably on the National Register of Historic Places. It was built in the period 1910 - 1911 or just over 103 years ago. It is located at 2039 New Hampshire Avenue and is a cooperative (one of the oldest in the city). The Hampton Courts is located next to it at 2013 New Hampshire Avenue. It is a William C. Smith rental probably about 80 years old. 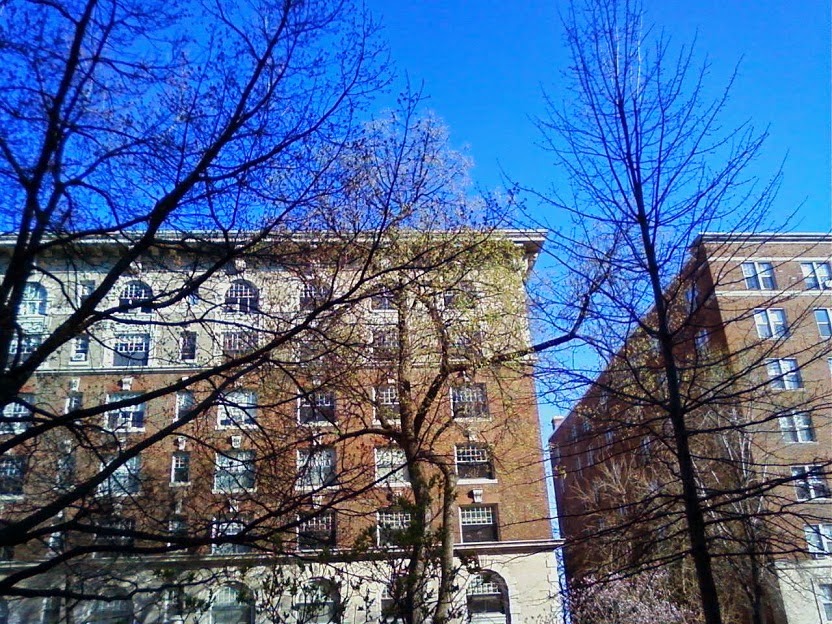 
My building is just an old workhorse of a structure suitable in vintage D.C. mélange style for starting out millennial professionals (or at least interns being supported by their parents), old African Americans, and multi-member Mesoamerican families. It is reasonably priced -- even if you were to move in today -- and in a real rarity, it includes all utilities. (My rent is $1160 per month for an efficiency. I think such a unit now would go for about $1500. Recall that the District of Columbia has rent control.) 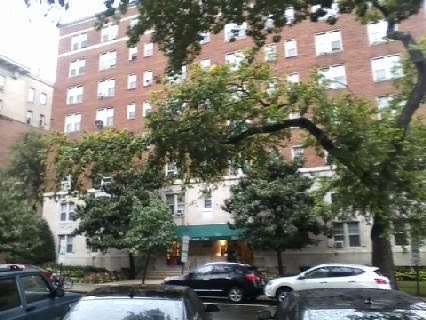 
Anyway, I have long known that the Northumberland was featured in a hit movie starring Harrison Ford but I could never recall it. So when I saw this fellow walking into the Northumberland, I did what I rarely do nowadays and struck up a conversation with him, quickly asking him if he knew the movie. His name is Fred and he has lived there for 18 years. 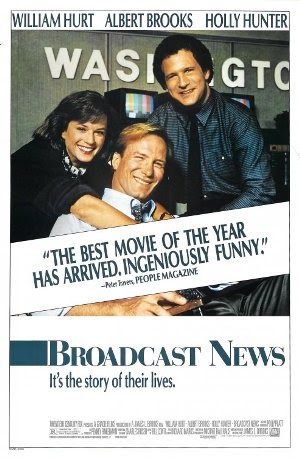 Fred replied that there were actually three movies featuring the Northumberland, but that one was the most famous. However, he couldn't remember the name of it or one of the other two. He could only recall the 1987 movie Broadcast News. He said that he moved in a year or so after the filming of the Harrison Ford movie in question and added that he lived right next to the featured unit.

Above: Theatrical release poster for Broadcast News from 1987. 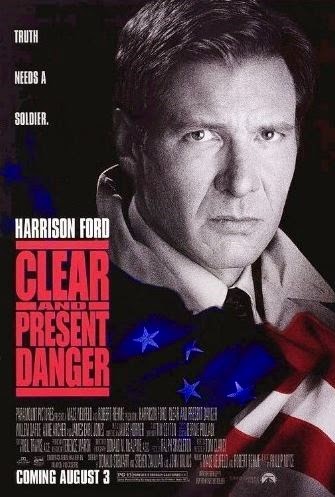 But then, by happy chance, his neighbor who lives in that very unit came outside and was chatting with a man and a woman. The neighbor -- Allen or Alan -- knew the movie in question: Clear and Present Danger. He already lived there at the time and during shooting he was put up at the ritzy Westin for two weeks. 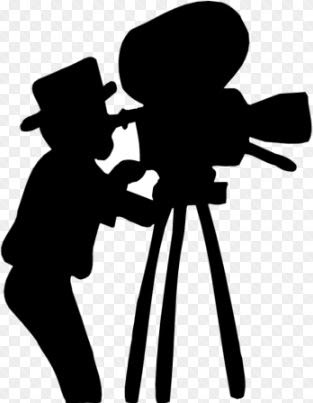 In 1987, the building was used in the Francis Ford Coppola film Gardens of Stone. Later that year, the film Broadcast News also featured the Northumberland as the home of William Hurt's character. Then in 1994, Harrison Ford arrived to film Clear and Present Danger on the grounds of the Northumber-land. In each case, the building was used to show Washington living at its finest. 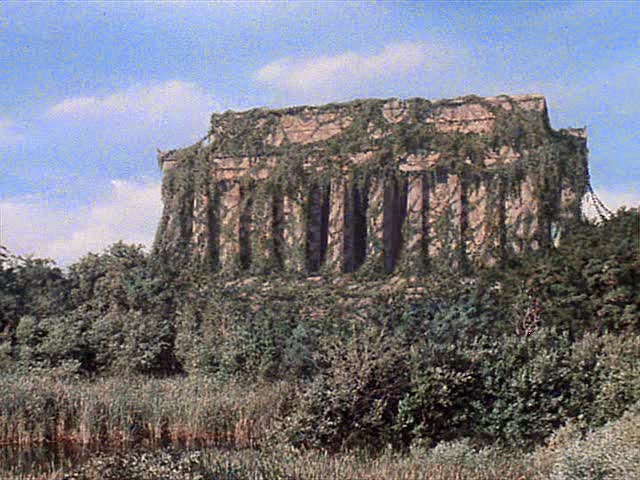 By then -- barring a cataclysm -- Washington, D.C., will probably basically be like one of those 1970s sci-fi dystopian movies: A domed city of only young and attractive and/or really rich people. Think Logan's Run, a reference that is doubly appropriate given the scenes of post-apocalyptic, abandoned / ruined / overgrown Washington, D.C.

Of course, I couldn't be Peter Ustinov anymore than I could be Michael York. 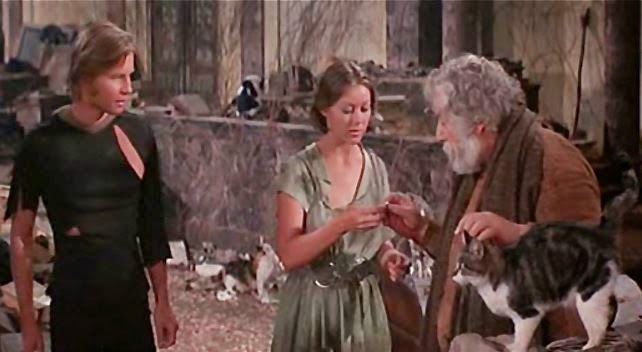 OK, that's all for now. I had intended to post a longer entry later tonight, but I'm also so tired following my regular work day and decent gym workout. That entry will have to wait.
Speaking of things Logan ... 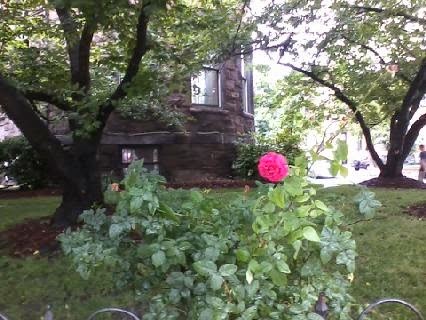 A rose grows in the yard where P Street and Rhode Island Avenue come together at Logan Circle, Washington, D.C., 6:42Pm July 9, 2014. (The actual circle of Logan's Circle is across the circular roadway that rings it.)
*******


Unseasonal Earth and Unusual Space Weather ...
Changing subjects, I do want to briefly discuss the forecasted rather unusual high summer return of the polar vortex -- or rather, for meteorological purists, a "poor man's version" of the polar vortex next week to the Upper Midwest and Great Lakes region and stretching into the Eastern U.S.. I also would like to direct your attention to the informed speculative long-term outlook for next winter owing to the "Modoki" version of a warm ENSO event.

GFS models showing forecasted 500-hPa geopotential height normalized anomalies for North America for Jan. 6, 2014 (this was a 96-hour forecast from four days earlier) and for July 15, 2014 (a 144-hour forecast from two days ago). Click on image for larger / readable versions.
*******


It would appear that the polar vortex -- even in this "ghostlike" summer incarnation that might not technically atmospherically be the polar vortex, but whatever -- keeps "wanting" to slide out of the Arctic and into the "Western Hemisphere." 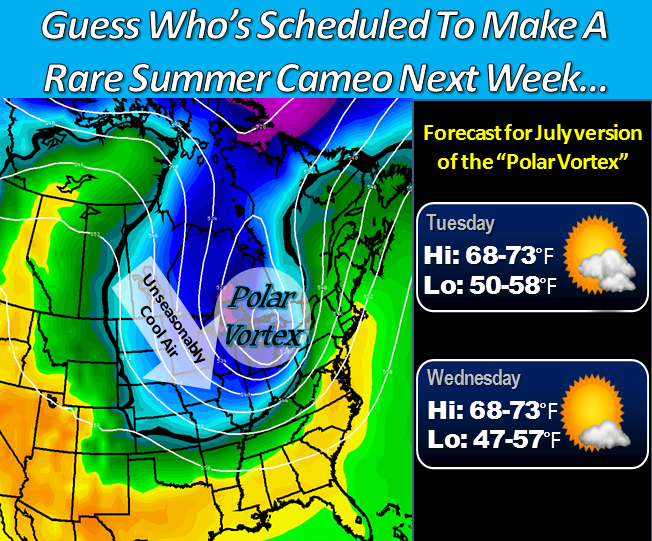 Schematic and information graphic issued by the Chicago NWS Forecast Office) in the last day or two (not quite sure exactly when) showing expected conditions in the Chicagoland area next Tuesday and Wednesday (July 15th and 16th). For the D.C. area, highs on the 15th are forecasted to not even break 80F.
*******
You can imagine this is really setting off the GOP Teabagger "Global Cooling" crowd -- and throw in that whole business of the Earth's magnetic field weakening rapidly over North America ahead of an impending polarity reversal in the coming centuries-to-millennia, and it's a regular Yahoo News comment section-like donnybrook in the comment section of the above-linked CWG entry. To be clear, the two are NOT related by any known physical mechanism. 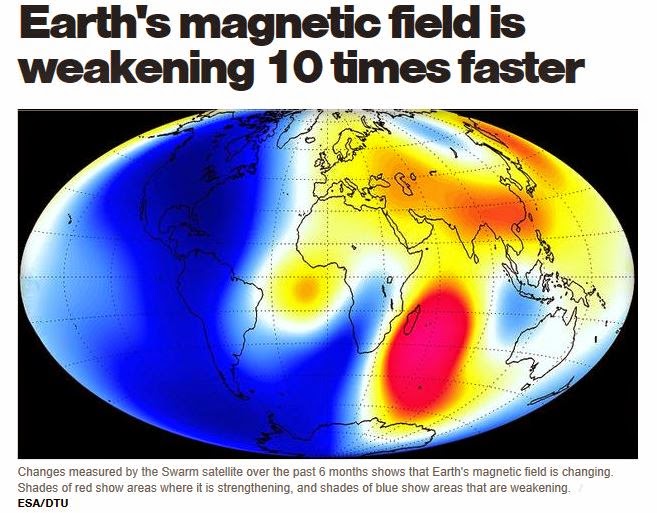 ESA Swarm satellite measurements of changes in Earth's magnetic field -- blue is weakening and red is strengthening -- over the past six months as released on July 9, 2014. Overall, the weakening is happening a full order of magnitude faster than thought (now at 5% per decade).
*******
While the geomagnetic pole flip is not physically threatening to humans or the biosphere overall, when it happens (playing out possibly over decades or centuries), it will wreak havoc on all kinds of navigation systems and upend our basic sense of "compass north." Indeed, Earth is likely to have multiple magnetic poles rather than a north and south during the reversal until the new field is established, but in the opposite sense that it had been
In the meantime ... 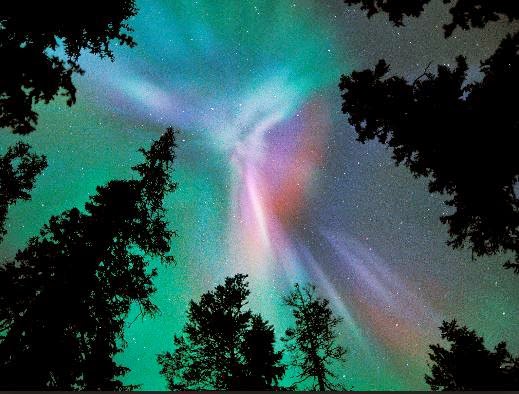 
OK, that's all for now. I will probably have more to say on these topics in coming entries. My next update might not be until Saturday.
-Regulus
Posted by Regulus at 2:47 AM