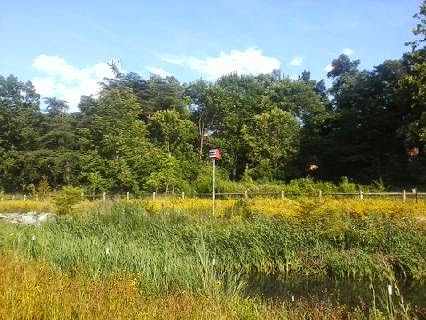 The miniature and perfectly restored / created wetlands with lots of Black-Eyed Susan flowers and a pond with a tall birdhouse on the grounds of the National Institutes of Health (outside the main fence), Bethesda, Md., 5:38PM July 6, 2014.
*******


This entry contains the pictures I took on Sunday on my bike ride from Grosvenor Park* -- where I went with my bicycle on the Metro Red Line -- back into D.C. via the Bethesda Trolley Trail and Capital Crescent Trail and through Georgetown. I am also reposting the three pictures -- for the sake of completeness and chronology -- that I posted in my previous entry. 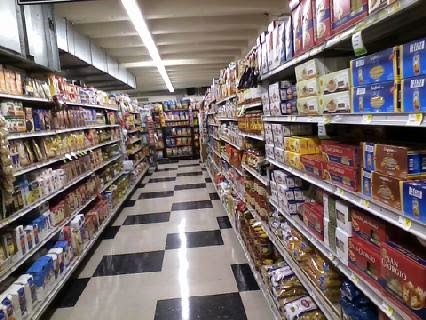 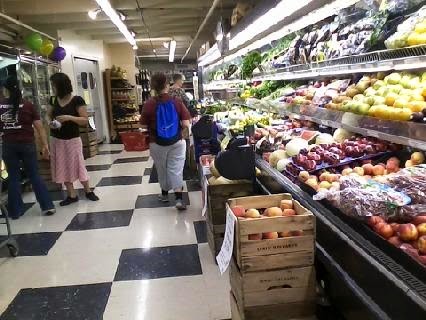 
Tonight, I did not go to the gym. I got home just a bit too late (remember that my gym visits are 2-1/2 to 3 hour, multi-part ordeals), and even then I tried to head over but felt a bit dizzy in the humid, summery dusk. As it is, in the past week (since last Monday), I went to the gym three times (jogging a total of 18+ miles, along with some decent weightlifting and swimming) and rode my bike on three occasions (Thursday, Friday, and Sunday) a total of almost 40 miles.
All in all, I think I'm OK taking tonight off. I intend to go tomorrow, although there is a slight chance I might not. 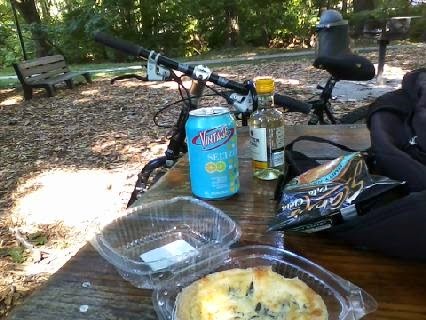 The picnic table at Grosvenor Park under a grove of trees, Montgomery Co., Md., 4:51PM July 6, 2014.  Yes, that's a can of Vintage Seltzer water -- Grosvenor Market is the ONLY place I've been able to find it.
The table -- actually, a series of them -- are located between GP II and GP III buildings. There was a large sycamore tree next to the picnic table and it kept shedding thick flakes of its bark.
*******


Anyway, I'm home now composing this blog entry and watching -- or rather, listening -- to a Sanford & Son rerun on Antenna TV. Recall that my television is on the fritz and I can't get a new one just yet (and might not be able to if my job situation were to head south). The earlier episode of All in the Family entitled "Stretch Cunningham, Goodbye" in which Archie has to give the eulogy at his late co-worker Stretch Cunningham's funeral -- at which he finds out that Stretch was Jewish -- is HILARIOUS but it ends poignantly.
By the way, while looking for that YouTube clip, I across a scene of the episode "Edith's Death" -- first aired DATE -- that I've never actually watched (I just never wanted to see it). The last 4:30 clip of Archie, who is now a widower and left with his adopted granddaughter Stephanie, is impossible to watch without crying. Quite powerful. The link is here. 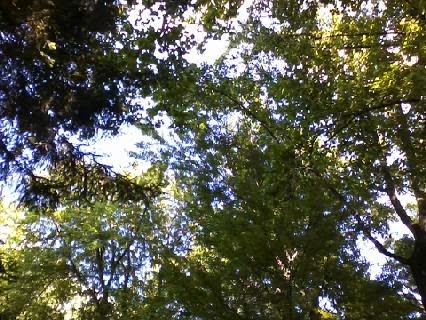 
About my job, I actually had a decently productive day at work as an assignment of moderate length arrived in the form of editing sections of this year's IEA main hybrid and electric vehicle summary report (it's a book). I worked on the 2011 edition. 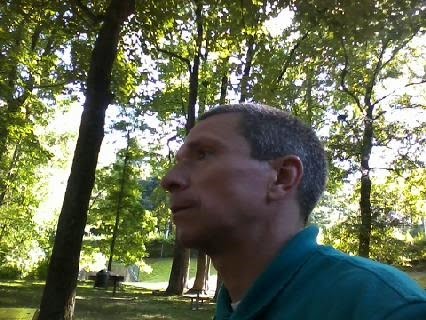 
I also have my Texas case work about to start up. A non-trivial amount of grant money has to be moved around and to do it requires everything be done properly. I don't actually do that part but I do contribute (as a contractor) to decisions made by the client (a Federal agency), with whom I have a really good working relationship (one person in particular). 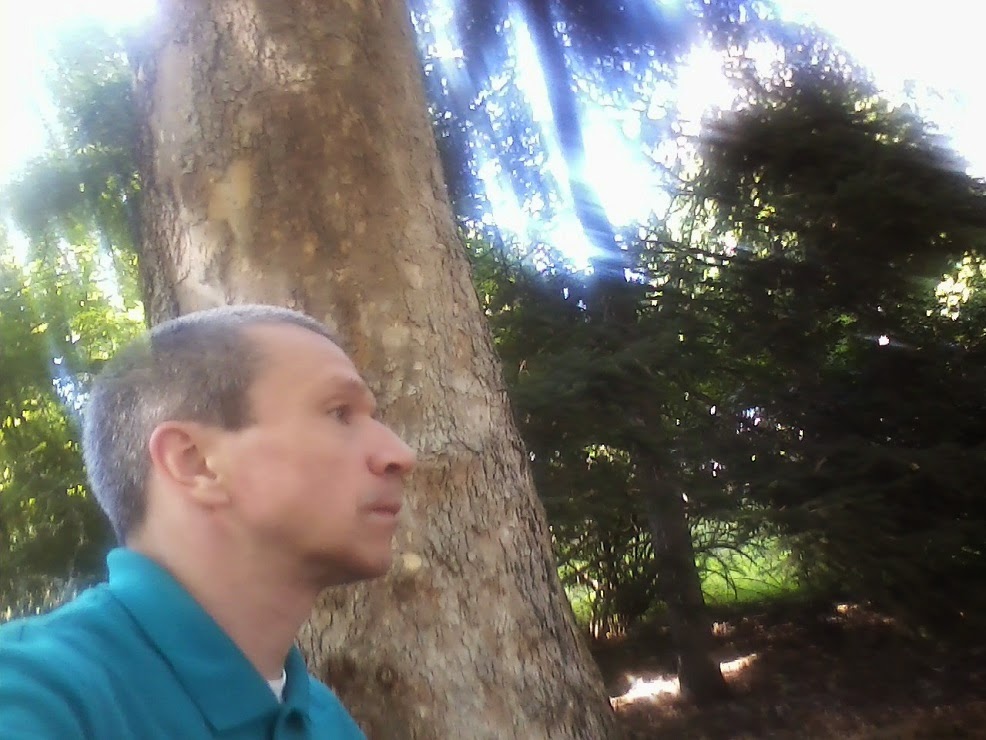 Another picture of yours truly along with the trunk of aforementioned sycamore trees in the shaded picnic area of the Grosvenor Park grounds, Montgomery County, Md., 4:56PM July 6, 2014.
There are quite a few people who have lived for literally decades in the sprawling "GP" complex with its three 1960s-era ginormous, hyper-energy inefficient buildings in their peaceful setting. And the residents include quite a few really elderly ones as well as some heavy-hitters.
********


I'm going to try to call my dad tonight.
Updated (prior to posting): OK, I had an hour-long conversation with my dad down there Florida, or rather, it was the mostly one-way monologue. However, there is some hope that Shannon might be moving out (even if temporarily) to live God-knows-with-whom. He thought it might be in Lakeland, Fla. I would actually go down there for a few days if I was sure that she was no where around and there was no danger of her showing up. (I can easily handle his crazy. Just not hers -- and CERTAINLY not with her 13-year old daughter lurking around. (The daughter mostly lives with her stepfather but comes over occasionally to their single-wide trailer-by-the-sea in unincorporated Flagler County. Her biological father is not really around.) 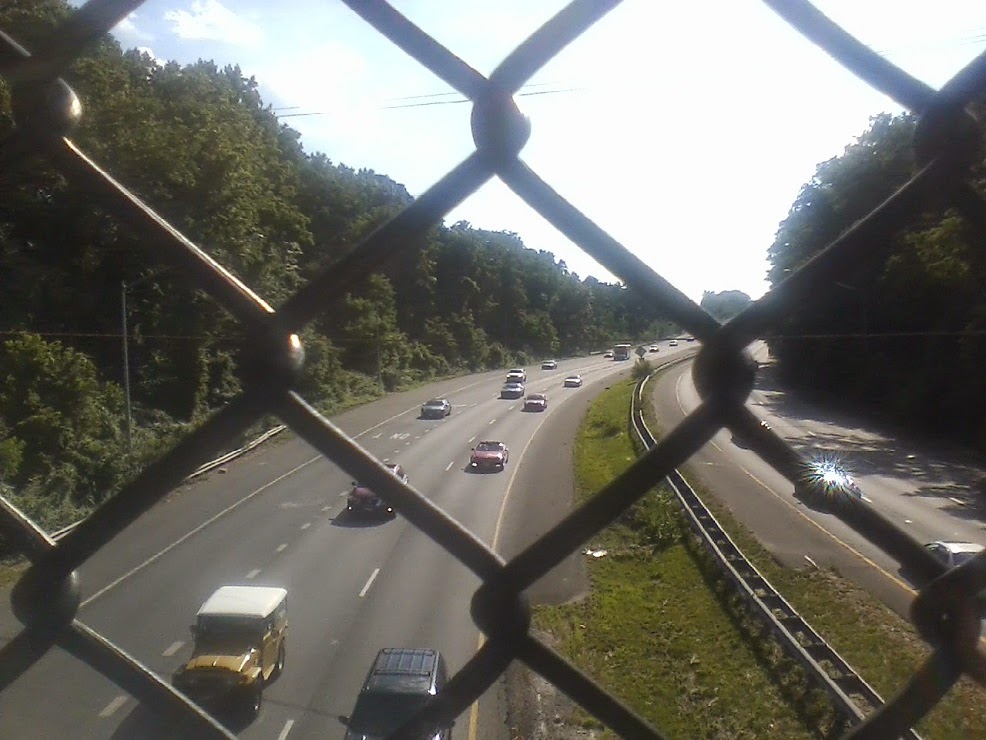 
I started to type some of the things my dad was saying. Unfortunately, I only got a few fragments of it. I think the next time I talk to him, I'll try to type out what he is saying. I should be able to get the gist of it.
Here is just a tiny excerpt:
"We went food shopping with her food stamp card. [In response to my question, "I'm surprised she doesn't try to take your money. She doesn't?] No. The main things she takes are the fvcking pills ... But she claims she doesn't know where I keep the spare keys. I lock them in my car where I keep the diamond ring ... I go back on the 18th and I hope she's gone ... If I could get rid of her, I could save a lot more money ... And the way she talks to her daughter. It's fvck this and fvck that. And she says it back ... She's got a food stamp card, she gets about 220 a month. Her food stamp card is really just for her daughter ... You buy a guitar for 200 dollars but then sell it at the pawn shop a few years later and they only give you 25 ... I want to get a motorized bike ... I can get into town [Flagler Beach] and get away from her for a while." 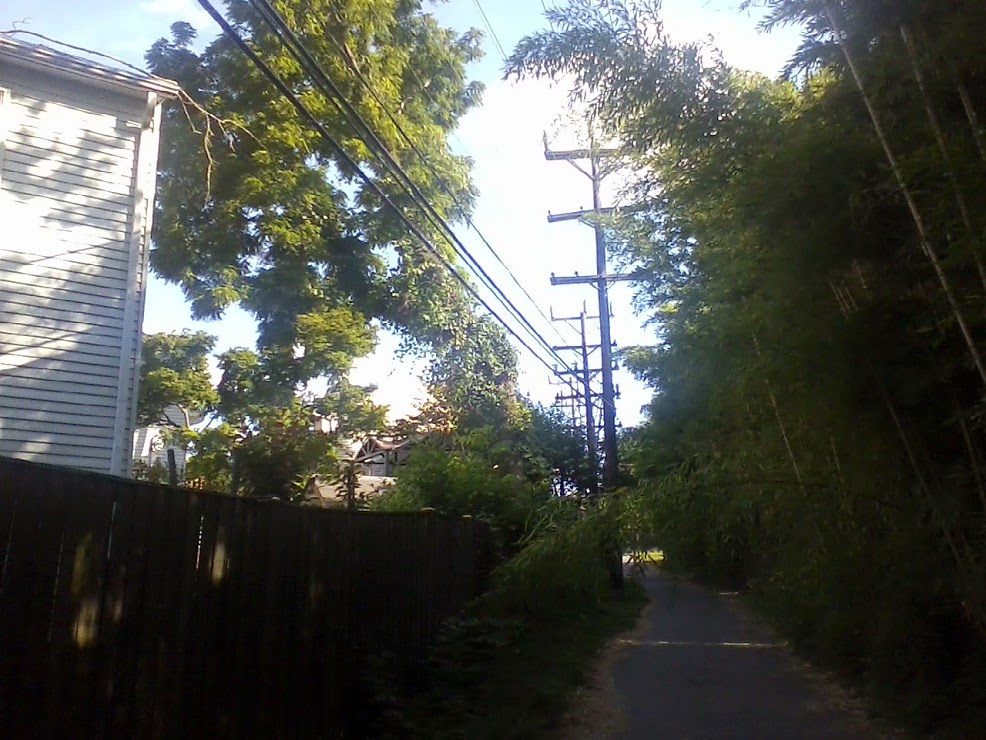 The Bethesda Trolley Trail in Bethesda, Md., 5:26PM July 6, 2014. This is the stretch that is a dedicated trail rather than just part of the sidewalk along Old Georgetown Road.
*******


OK, the rest of this entry just contains the pictures I took this past Sunday and a recount of a story from 1999 involving one of the places pictured. 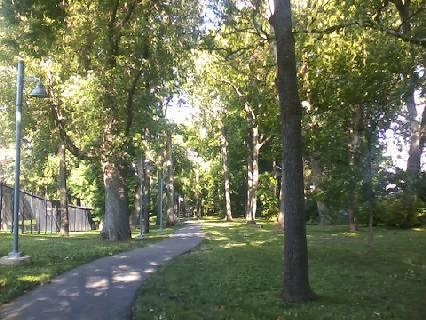 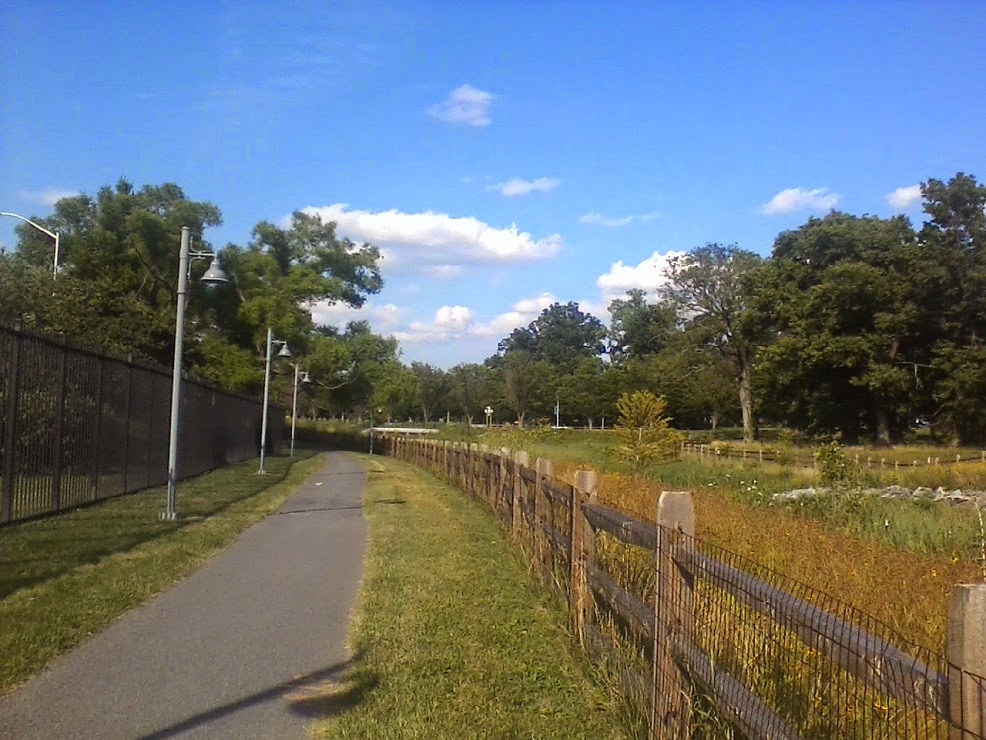 One of the maze of pathways that loosely forms the Bethesda Trolley Trail on the grounds of NIH, Bethesda, Md., 5:38PM July 6, 2014. (I am sure there is technically one path that is the "BTT" but I couldn't tell.) This is by the aforementioned wetlands with the pond and lovely Black-Eyed Susan flowers.
******** 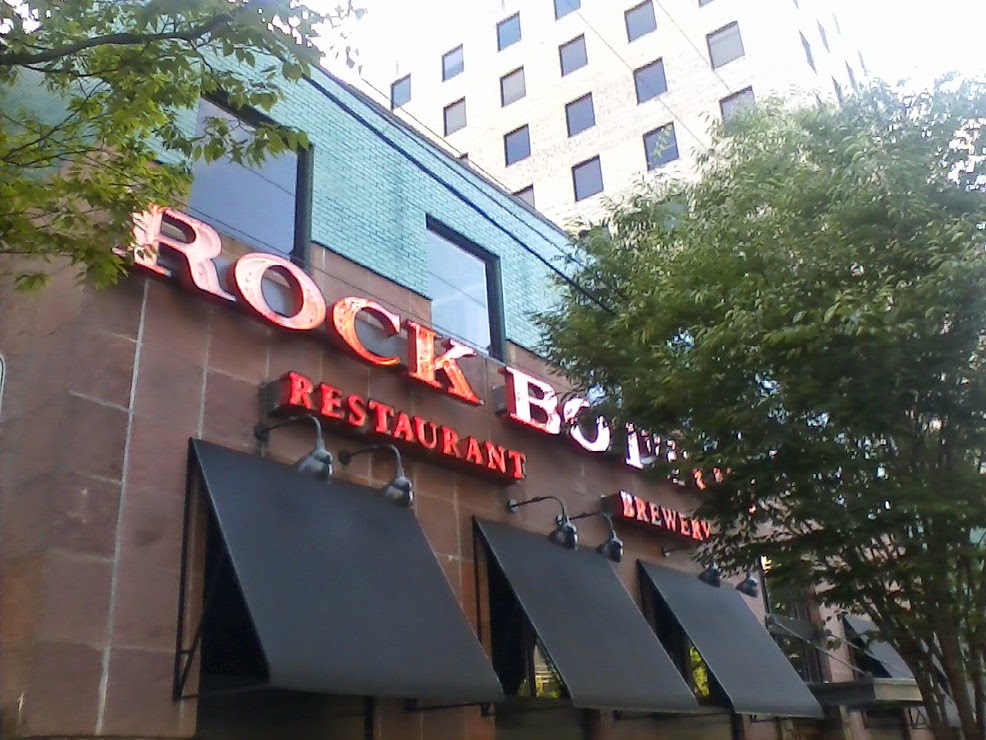 The outside façade and sign of the Rock Bottom restaurant and bar in Bethesda, Md., 5:48PM July 6, 2014.
One of these days -- well, I guess right now -- I need to post the story of an ugly fight that I had there with someone I once knew -- let's just call him "Car" -- during a drenching thunderstorm. "Car" viciously verbally attacked me and I launched right back at him. Yes, it had to do with the rain, or rather, the rain that apparently ended a drought we were in at the time.
******** 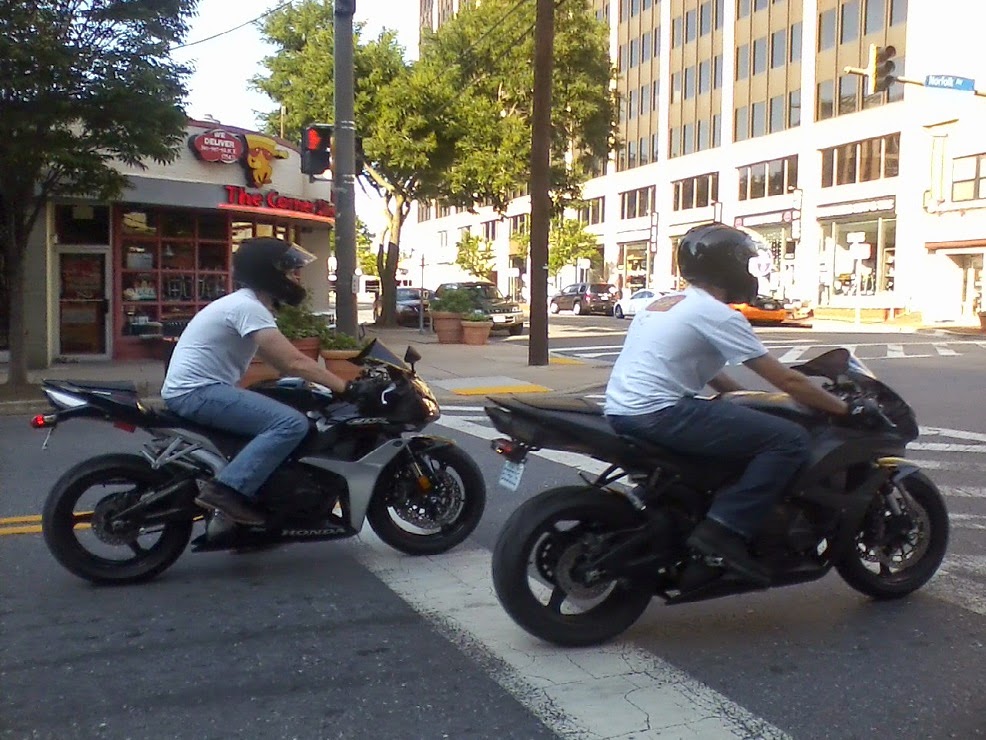 
This was circa 1999, a particularly sh!tty weather year.) Car and I had very different political views, but more than that, he had a problem with me and the kind of person he saw me, specifically, as one who didn't really work hard for anything or appreciate money but instead was a "lazy" and an ultra-liberal argumentative academic. But this is just me venturing a guess. As for me, I didn't like his politics or his tastes and sense of humor. This stretched back even earlier because I actually knew him in high school in Glen Burnie in the mid-to-late 1980s. At that time -- in drama class and the audio-visual club, we fought constantly. He once chased me around the GBHS auditorium. (He is also the only person ever to "defeat" me in an election when I inexplicably ran for audio-visual club president circa 1987.)
This continued some years later when we both attended St. Sh!tty's College in the period 1989 - 1994, although my time there was abruptly (but, in retrospect, thankfully) cut short in Sept. 1992. 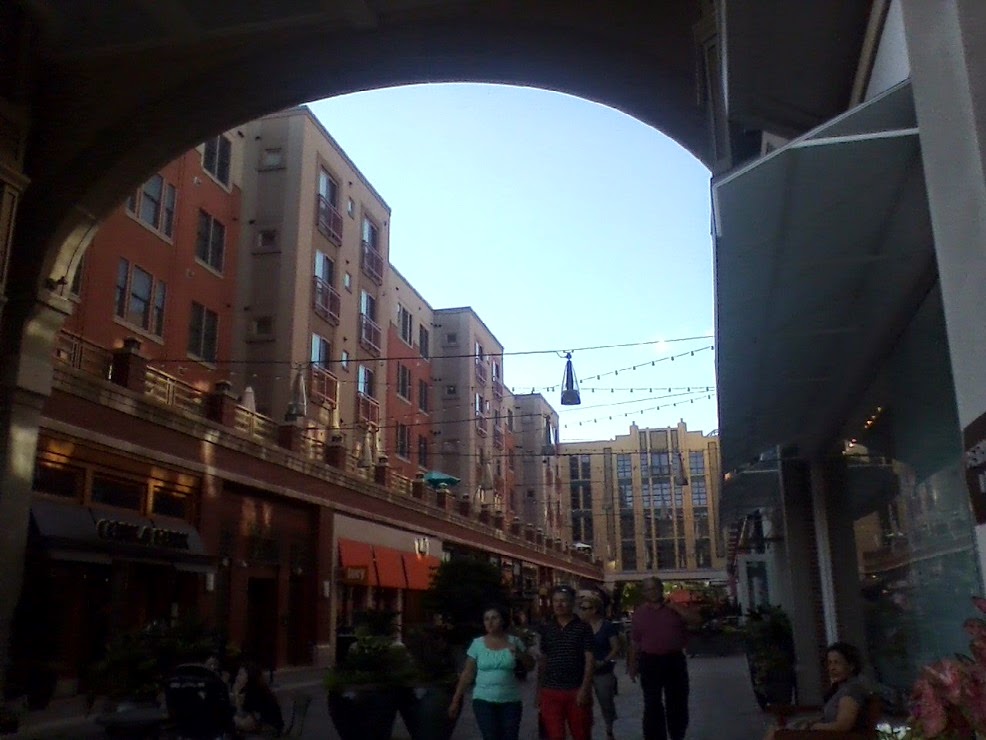 
Anyway, returning to the Rock Bottom story, what happened was that Car attacked me in a blast wave of vituperative profanity that ostensibly began because of a discussion of the weather and why in this torrential rain was Montgomery County putting in water restrictions while Virginia wasn't. (The rain marked the end of a lengthy dry spell.) It came out of no where but (as I mentioned), it wasn't the first time. 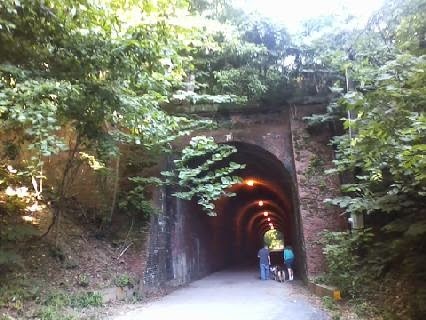 The north side entrance to the Dalecarlia Tunnel along the Capital Crescent Trail, Bethesda, Md., 6:11PM July 6, 2014.
There was as couple walking three dogs just entering the tunnel.
********


When he attacked, I launched right back. People have never had the slightest problem fighting with me, and I fight back. Maybe it's a chicken-and-egg thing. Anyway, the verbal explosion instantly ended the group dinner night. Oddly enough, Wall-P came immediately to my defense while everyone else, naturally, sided with Car, and Car's wife (or maybe she was just her fiancé at the time) was quite angry at Wall-P. 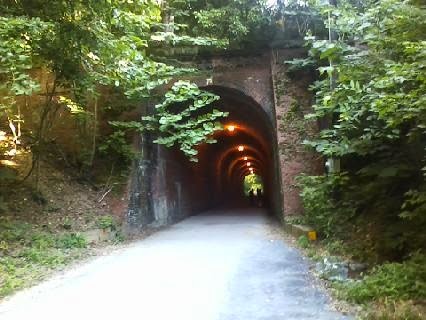 The north-side entrance to the Dalecarlia Tunnel along the Capital Crescent Trail, Bethesda, Md., 6:12PM July 6, 2014.
The couple walking the three dogs had already disappeared into the dimly-lit darkness of the tunnel.

(This was years before Cruella de Staff came n the scene and took over everything. But it was also before he made partner at his former high-octane firm and was still an actual human being.) 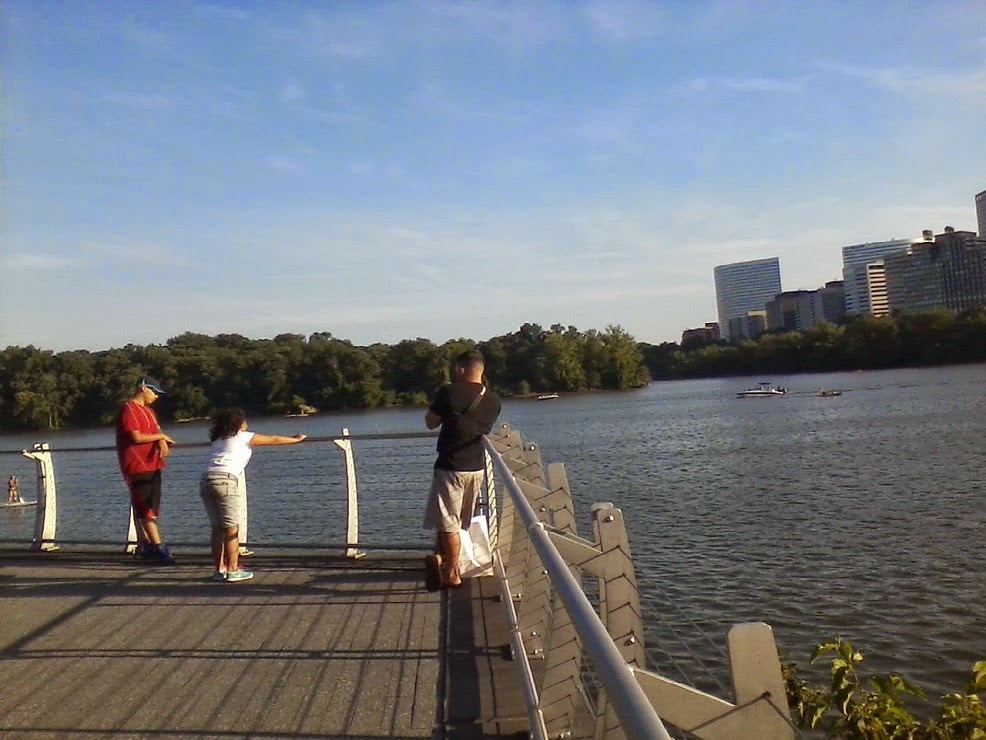 Three people (a family -- and I think there was a fourth person) standing along the Potomac River in Georgetown Waterfront Park, Washington, D.C., 6:44PM July 6, 2014.
I was standing nearby in the brilliant, low-angled sunlight because the spot I picked was suddenly in close proximity to a homeless man who looked like one of the ZZ Top digging through the garbage.
I didn't go to Chadwicks since I had to reign in my spending.


A few years later, Car would attempt to make amends me with -- now that NEVER happens in my life, EVER (no one EVER apologies or "returns" to me) -- in the wake of the 9/11 attacks. Why he did this is a long story that I won't relate here, esp. since it doesn't really directly involve me, though it is quite interesting in its own right. 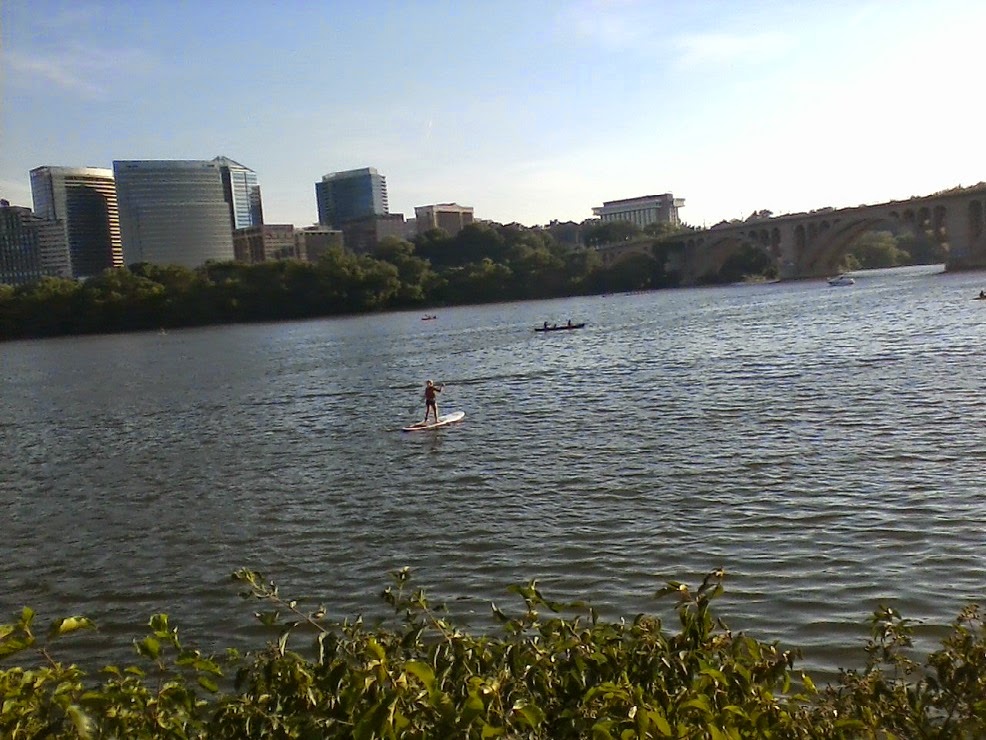 
But after that -- and partly because he seemed to mellow overall -- we were rather friendly for a while. I have always appreciated that. And he is basically a very decent person with a very high personal ethical code (just a pugnacious temper, at least back then.) However, we have fallen out of touch now that the whole Wall-P gang is out of my life. 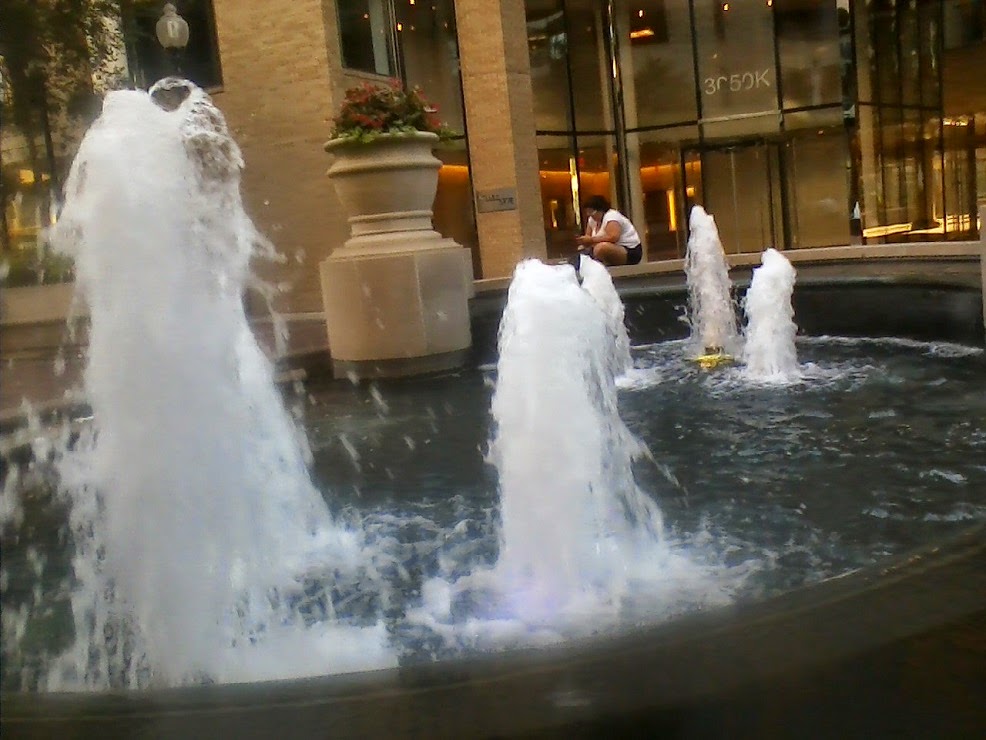 
As for St. Sh!tty's College, it is the UR-embodiment of a whack-doodle, ultra-liberal, hyper-overpriced liberal arts college. To quote Gene Lyons, it's the kind of place where academic committees are trained to see racist symbols in the passing clouds. That aside, it was a bad place for me. 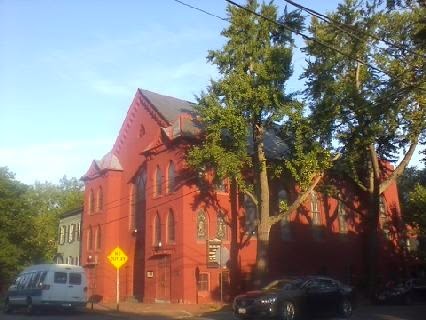 
OK, that's all for now. My next planned update won't be until late Wednesday night, or perhaps even Thursday.
--Regulus
Posted by Regulus at 2:06 AM