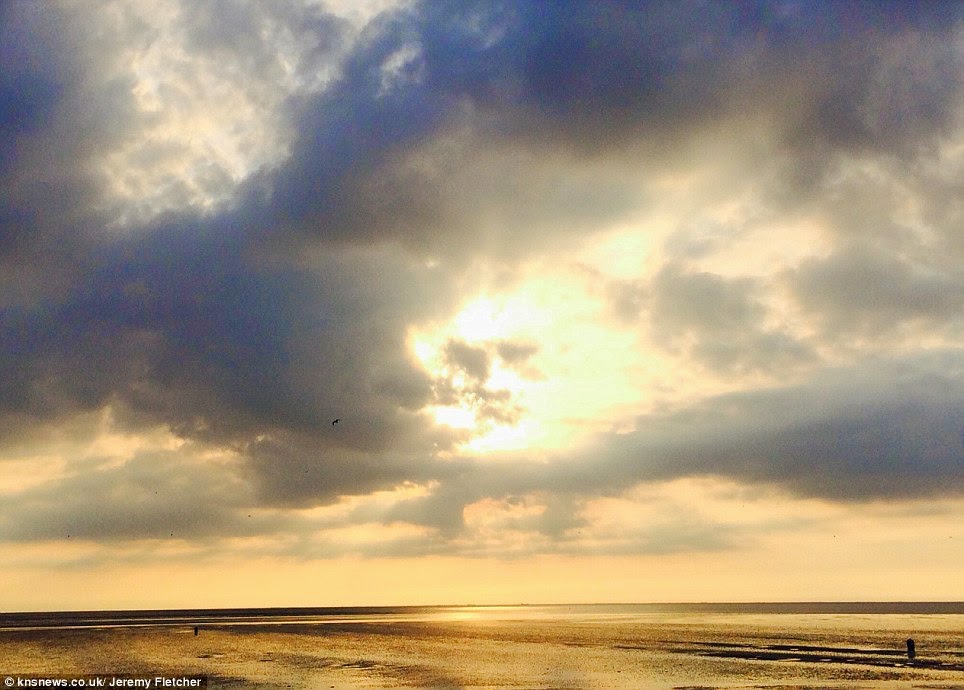 A picture taken on or about July 21, 2014 by Jeremy Fletcher at Snettisham in Norfolk, England along a body of water called The Wash. The picture appears to show a face -- Fletcher said it could be that of God ... or Sean Connery ... or Karl Marx ...
The picture was carried in an article in the UK Daily Mail and then picked up in this entry by the Capital Weather Gang.
By the way, I think the name "Washington" ultimately derives from "Town on the Wash." (Yes, I am well aware that Washington, D.C., is named for George Washington.)
*******


For this entry, I would like to discuss two articles of note.
The first one is this New York Times article (link embedded): Beyond Energy, Matter, Time and Space
Synopsis: Humans might think we can figure out the ultimate mysteries, but there is no reason to believe that we have all the pieces necessary for a theory of everything. 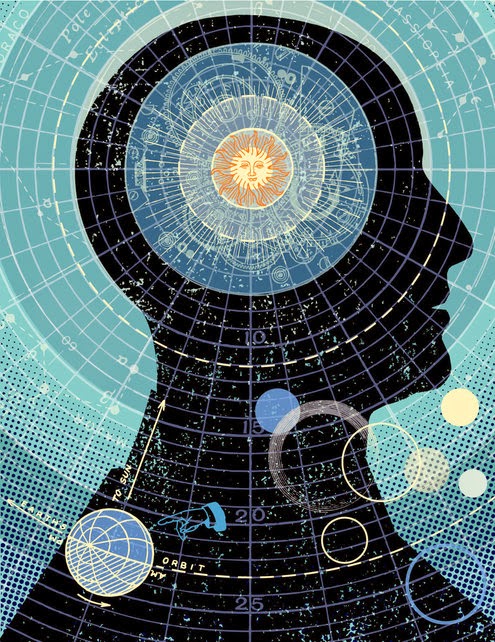 The article by George Johnson discusses two books: The 2012 book Mind and Cosmos by philosopher Dr. Thomas Nagel and the new book (2014) by  the world-renowned MIT physicist/cosmologist Dr. Max Tegmark entitled Our Mathematical Universe: My Quest for the Ultimate Nature of Reality.
The Nagel book subtitle is "Why the Materialist Neo-Darwinian Conception of Nature Is Almost Certainly False."
In summary, Dr. Nagel argues that "mind" -- along with matter and energy -- is "a fundamental principle of nature" -- and that we live in a universe primed "to generate beings capable of comprehending it" so that biological evolution has a direction and even a purpose rather than being (quoting from the article) "a blind series of random mutations and adaptations." 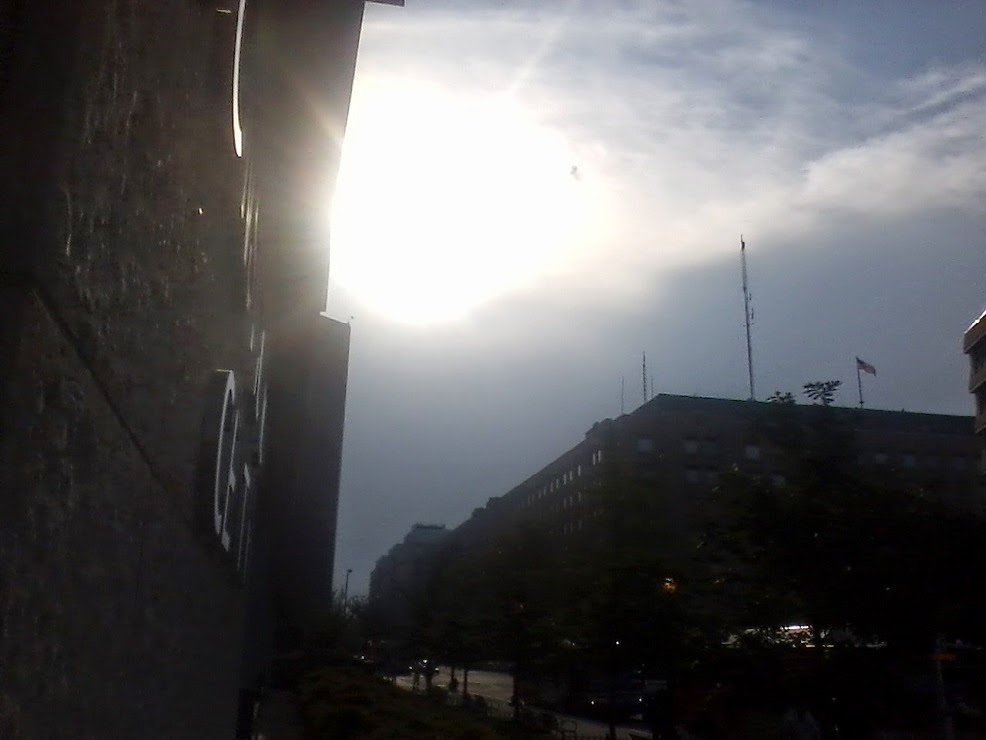 The early evening Sun is about to disappear behind an approaching cloudbank from a distant, broken cluster of thunderstorms, as seen from near L'Enfant Plaza looking west along D Street SW, Washington, D.C., 6:07PM July 23, 2014. The storms moved into the D.C. area but the coverage was very spotty and they missed the District proper.
*******


The New York Times article states that Dr. Nagel's ideas are conceptually similar to those of biologist Stuart Kauffman, who has suggested that Darwinian theory must somehow be expanded to explain the emergence of complex, intelligent creatures, and philosopher David J. Chalmers, who has endorsed the concept of "panpsychism" by which he means there is a kind of consciousness, even if rudimentary, that pervades Cosmos.
Meanwhile, Dr. Tegmark argues that the Universe actually IS a mathematical structure with space, time, energy, and matter emergent properties of this structure.
*******


The second article is about the massive -- and likely massively destructive -- solar storm that very nearly struck Earth two years ago to the day. 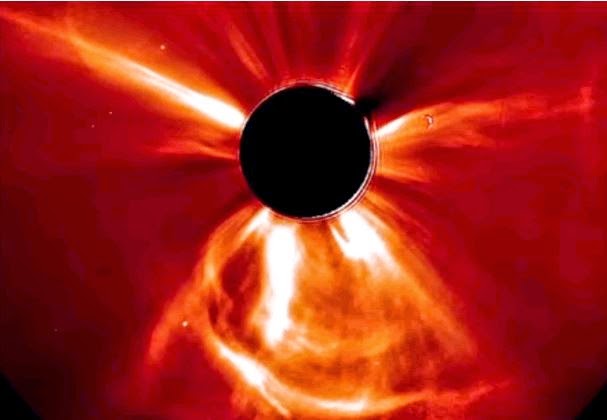 The solar coronal mass ejection (CME) of July 23, 2012 as measured by the STEREO-A probe (see below for more information).
To be clear, these are false colors: The plasma from the Sun is incandescently white.
*******


The initial article I found was actually this WaHoPo online Capital Weather Gang blog entry by Jason Samenow from July 23, 2014 (link embedded): How a solar storm two years ago nearly caused a catastrophe on Earth.
Synopsis: On July 23, 2012, the sun unleashed two massive clouds of plasma that barely missed a catastrophic encounter with the Earth's atmosphere.
This is shown in a pair of computer model simulations of the July 2012 CME event: 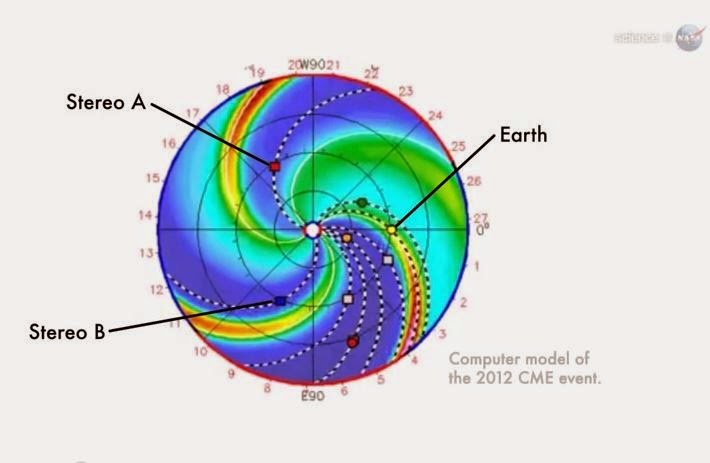 A diagram showing the "sweeping" jets of solar plasma emitted by the rotating Sun (located at the center) with the locations also show of Earth and of the two NASA STEREO (Solar TErrestrial RElations Observatory) probes that monitors the Sun (including its CMEs).
The two probes, STEREO-A and a STEREO-B, are located along Earth's orbit except one is ahead of Earth and the other is behind Earth. The STEREO probes are part of the NASA Solar Terrestrial Probes (STP) program and the space weather detection system. They are therefore quite important satellites.
(Please explain to your nearest Teabagger that this means spending "gub'mint money" on "SCIENCE" and "environmental observation" (though that might be too esoteric a term with too many syllables) to help EVERYBODY on Earth, even white Anglo-Protestant American people, and its true despite the fact that these probes don't DIRECTLY "prove" that "pre-Flood" Noah lived with the dinosaurs.) 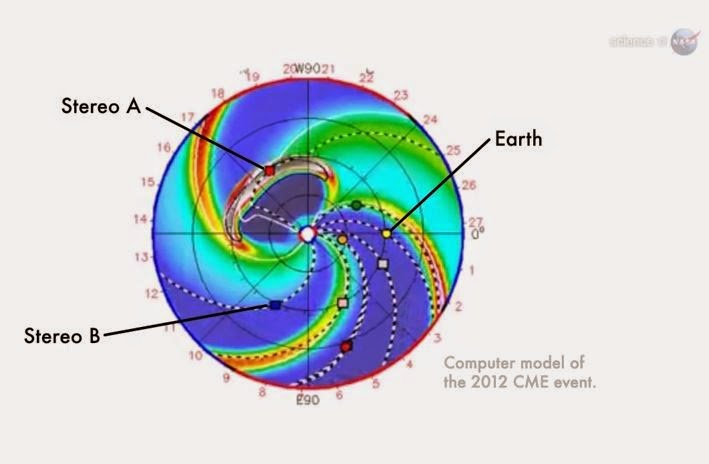 This shows the CME actually striking the STEREO-A probe -- right where Earth was located a week earlier.
*******


The July 2012 event featured a pair of "Carrington"-class* coronal mass ejections (CMEs) in rapid succession that almost blasted Earth's atmosphere directly, and that followed a CME just four days earlier that "cleared a path" in the existing solar wind plasma / interplanetary medium that would normally slow down a CME. 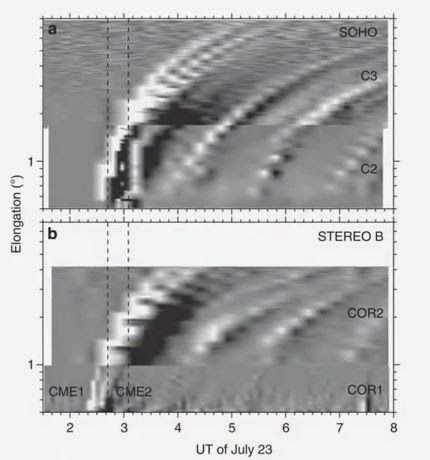 
*"Carrington" refers to English astronomer Richard Carrington, whose extensive study of the Sun and its sunspots and discovery of its differential rotation also included chronicling a massive (Carrington-class) CME that in fact struck Earth in late August - early September 1859. That event is known as the Solar Storm of 1859 or the Carrington Event.
While such a double-CME strike would not have harmed Earth's biosphere (including humans) thanks to its strong geomagnetic field, the effect on electrical grids, electronics, navigation systems, and pretty much every satellite there is would be devastating. Even toilets might not flush due as plumbing and sewage systems failed due to the reliance on electrical motors. 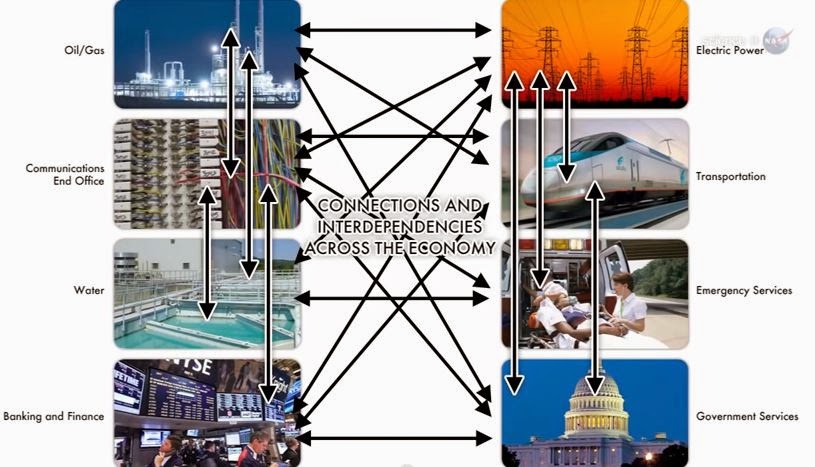 Schematic diagram of economy-wide connections and interdependences.
But where is The Washington Consensus and how will it and its "entitlement reform" and "deficit reduction" fixations and warmongering protect us??
*******


This, in turn, would have had cataclysmic effects on (as the CWG entry notes) "commerce, transportation, agriculture and food stocks, fuel and water supplies, human health and medical facilities, national security, and daily life in general."
For this reason, a better CWG blog entry title would have been "How a solar storm nearly destroyed civilization as we know it two years ago."
UPDATED 2:51AM 7/24/2014: The blog title was changed at some point earlier tonight to a more accurate: "How a solar storm two years ago nearly caused a catastrophe on Earth." My link above reflects the change. The URL itself still reflects the original title.
A National Academy of Sciences study in 2009 estimated the total impact of such an event would be $2 trillion or 20 times worse than Hurricane Katrina (not sure if that's just a U.S. impact). But that study analyzed the effects of a CME / solar storm like one that happened in May 1921. The Carrington Event of 1859 is estimated to have been 50 percent stronger. 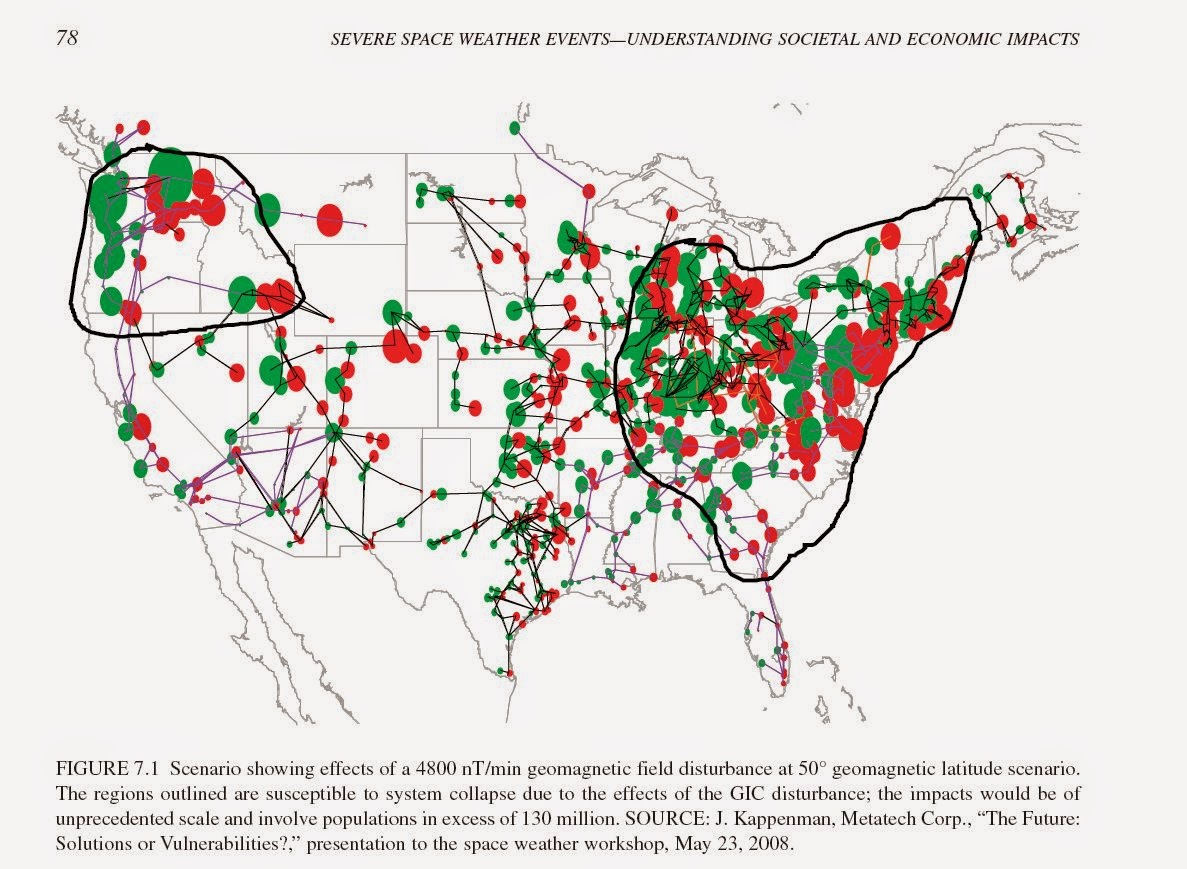 Estimated U.S. power grid effects of a 1921-like geomagnetic storm. I couldn't figure out what the red-versus-green spots mean but the more closely packed they are, the greater the likelihood of system failure. The solar storm is estimated at 4,800 nanoteslas (nT) per minute centered at 50N latitude.
*******


Back in 1859, though, none of these sensitive systems existed and thus it went unnoticed, although some telegraph wires were fried, resulting in a few fires in telegraph offices. Well, it wasn't entirely unnoticed -- there were some fantastic auroral displays down into the tropics.
The direct report to the NASA story (link embedded): Near Miss: The Solar Superstorm of July 2012. 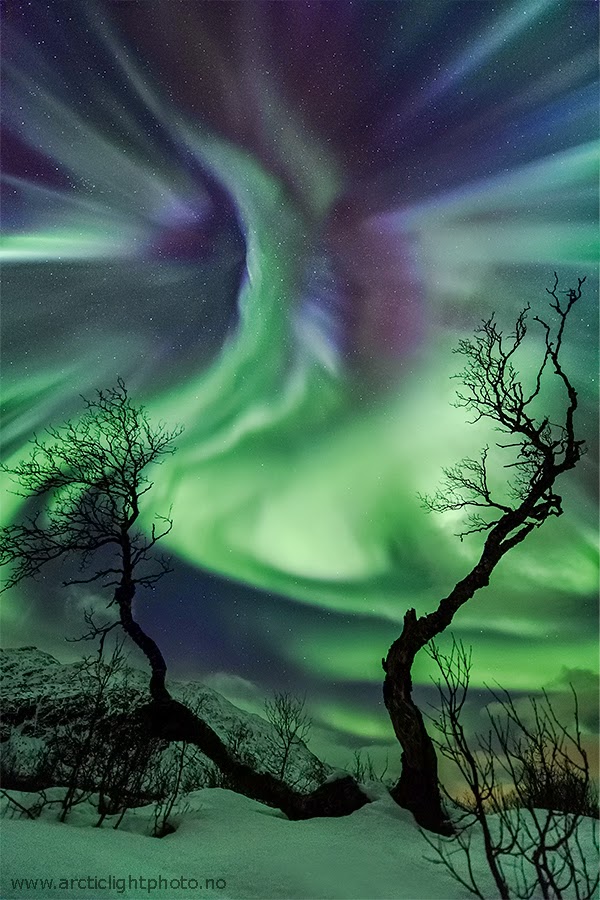 Oh, and the NASA story cites a February 2014 article by physicist Pete Riley of Predictive Science Inc. in Space Weather entitled "On the probability of occurrence of extreme space weather events."

Riley analyzed records of solar storms over 50 years and by extrapolating the frequency of ordinary and extreme events, he calculated that there is a 12% chance of a Carrington-class storm striking Earth in the next decade.


That's uncomfortably high given the consequences.
If a CME above a certain strength (not sure what that is) were observed to be heading directly toward Earth, it would be necessary to power off pretty much the entire grid for a short period of time -- or else have it fried out and take months / years to repair with the attendant massive disruptions to civilization. But it isn't clear we would have enough time.
The NASA YouTube clip on this topic is also worth watching:
*******


I guess that's about it. I'm fairly tired at this late hour following a busy work day (despite my deeply uncertain situation is likely to remain another couple months) and a decent gym workout, although I was in a terrible mood much of the day.
I had intended to post some Brady pictures tonight but it's too late now. I'll try to do so on Friday or Saturday during the day. OK, just this one: 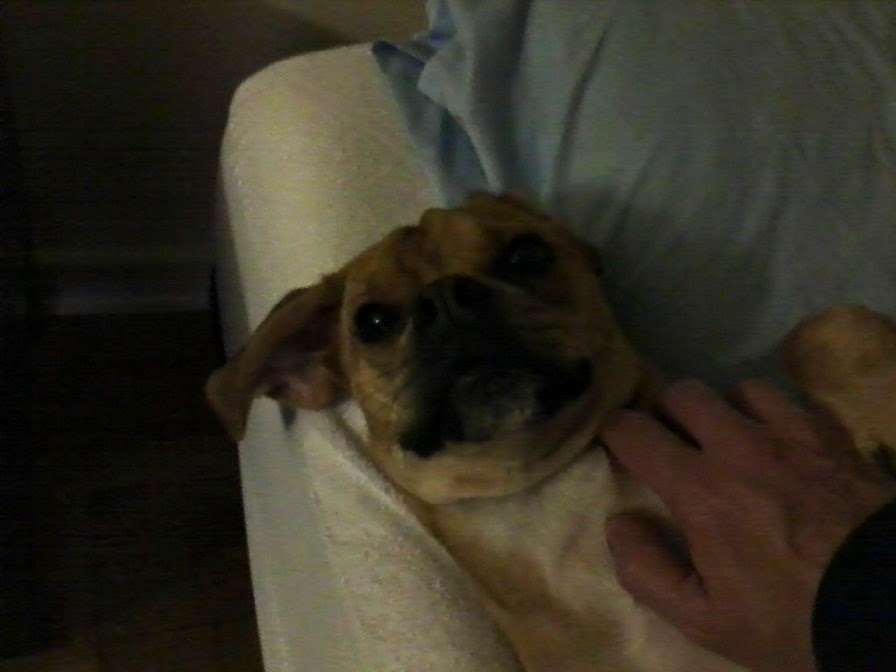 
I'm probably not taking the computer home tomorrow as I am doing a post-work happy hour for AT, who I mentioned in an entry over the weekend is leaving for a new job in San Francisco. We're going to Zengo tomorrow in Chinatown. I have enough left over money before my scheduled Friday paycheck that I can go. Thereafter, I might go to LL if Chris H. is working there.
OK , I'm signing off now. It's only nearly 3AM, as usual, when I finish these blog entries. Sigh.
--Regulus
Posted by Regulus at 2:47 AM