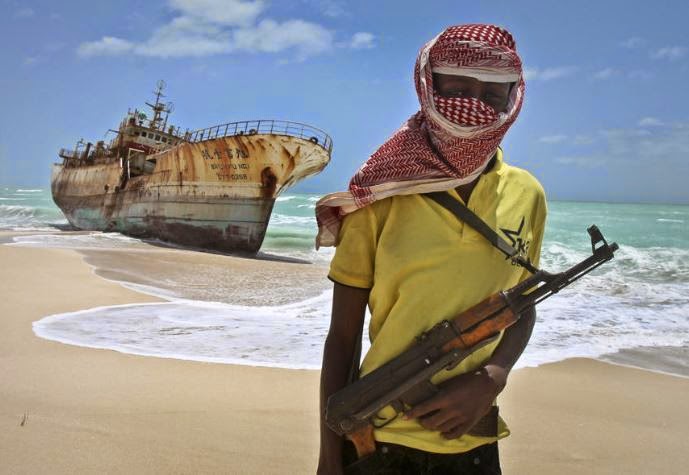 This picture of a (very) young Somali pirate standing beside the sunlight surf of the coastline of Somalia with a shipwrecked Taiwanese vessel in the backdrop was taken on September 23, 2012 and featured in this Yahoo News reposting of a July 13, 2014 Christian Science Monitor article (where it does not appear) about the dramatic drop in acts of Somali piracy off the Horn of Africa since 2011 due to significantly beefed up shipping security and swift onshore punishment that now makes being a "pirate" very dangerous indeed.
Anyway, it's an awesome picture ...
... something about the brightness of the day, the sand and the clean Indian Ocean water, and that very young man set in a place that "looks" like a splendid day in a familiar and inviting beach setting but that you realize is so profoundly alien. He's not a child on some summer crowded mid-Atlantic barrier island beach with his mom and dad and younger sister. And that's a real whatever kind of semi-automatic weapon that he wouldn't hesitate to use. 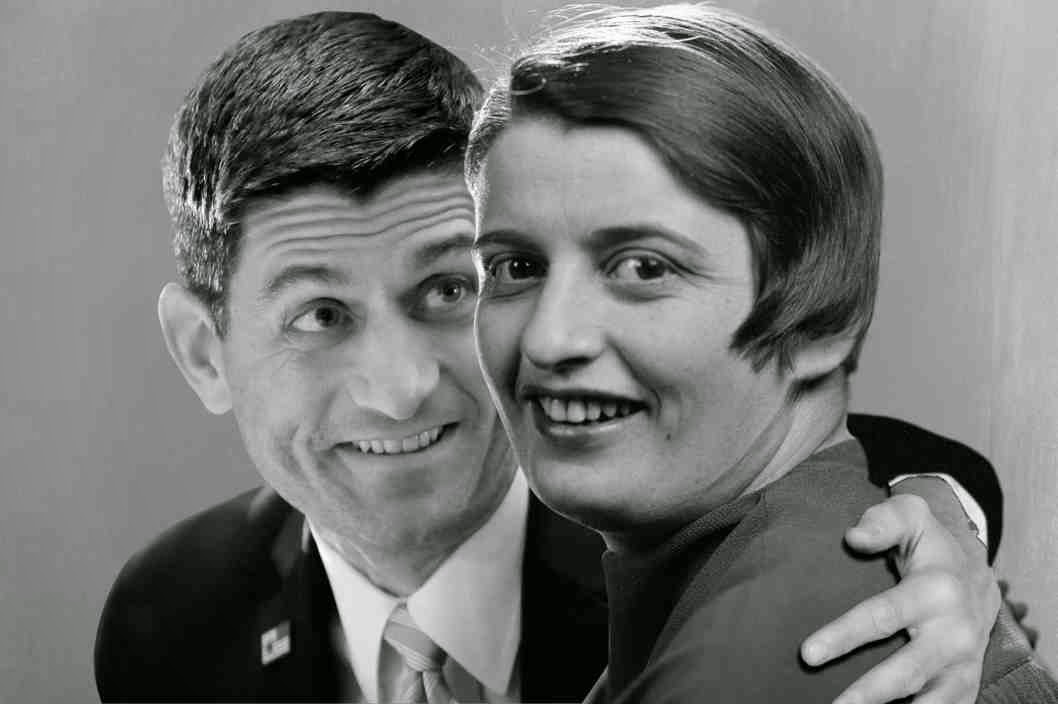 While the picture has nothing to do with the topic of this entry, it does show into what state a libertarian's paradise would eventually degenerate. (Speaking of degenerate, the Yahoo News comment section features yahoos in the underwear by the cattle car calling for mass killings; it is sh!tty even by the Yahoo News comment section's non-existent and socially / politically destructive standards.)
*******


For this entry, I would like to note and discuss a little bit this article that will appear in the print edition of The New York Times Sunday Magazine on July 13, 2014 (but that appeared online two days earlier) entitled (link embedded):
The Post-Post-Apocalyptic Detroit.
It should really be considered a period piece, a sort of time capsule of the mid-2010s, reflecting a contemporary mindset behind the latest / ongoing efforts to "save" Detroit. 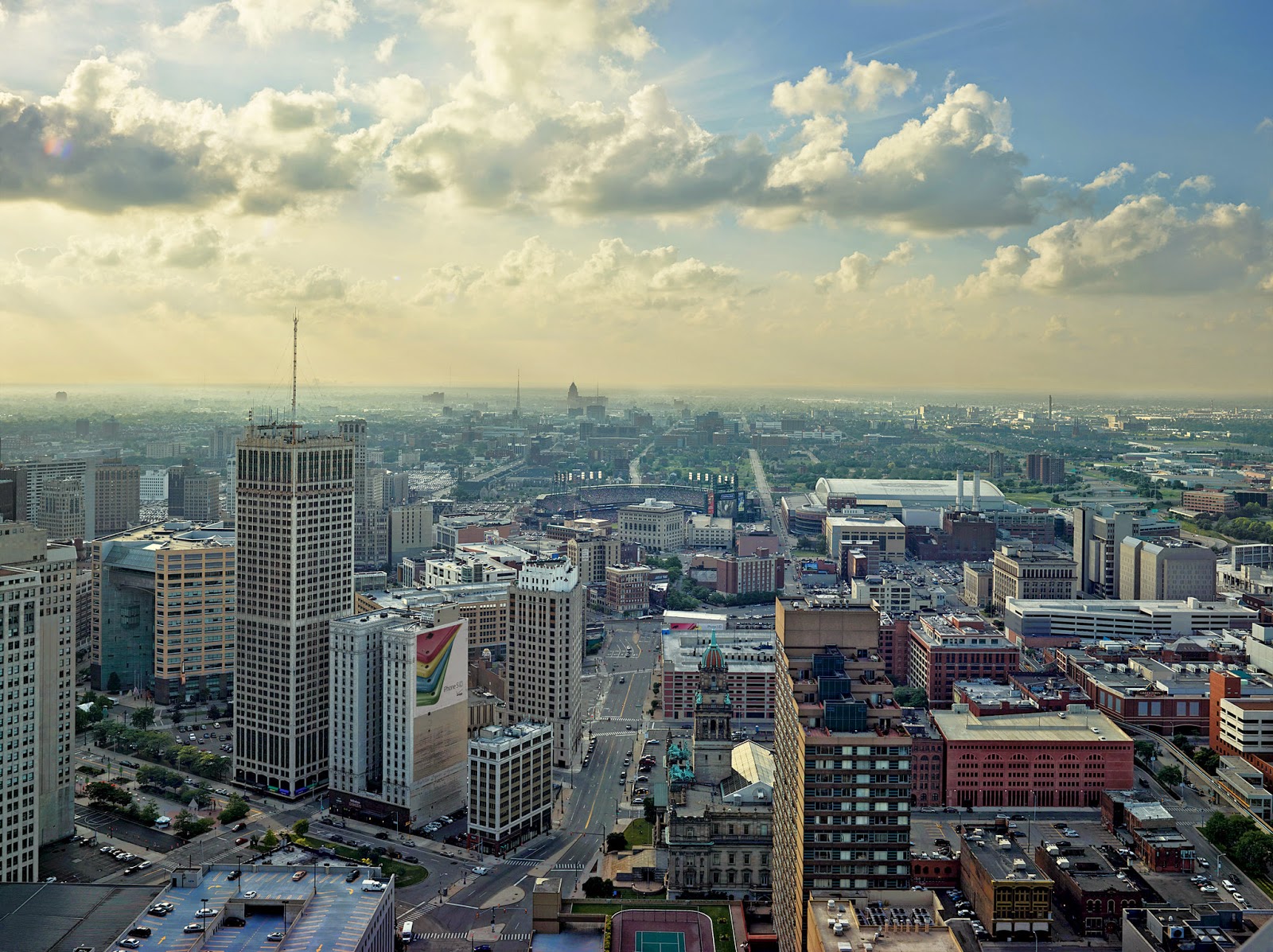 View of Detroit from the GM Renaissance Center.
*******


This article focuses on the efforts of an aggressive and egomaniacal billionaire Dan Gilbert, one of the founders and current chairman and the online retail mortgage company called Quicken Loans, to buy up or lease large amounts of property in downtown Detroit --60 and counting -- and turn it into some libertarian paradise with "privatized" this and "for profit" that. In his case, he wants to create a large corporate-run entertainment district that will create a sort of critical mass of revitalization (overseen, presumably, by him and a private security force). Quicken Loans is an expansive and sustained operation in the American mortgage racket, and it is headquartered in Detroit, employing 12,500 people. 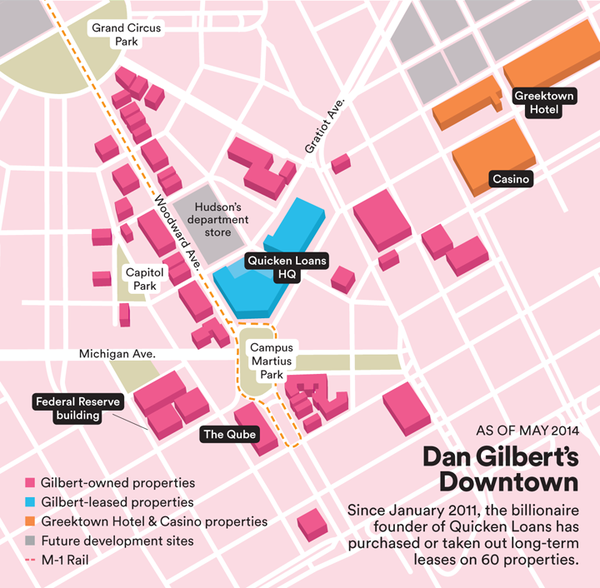 A map of Dam Gilbert properties purchased and leased along with "Greektown" Hotel and Casino properties marked as of May 2014 from the above-linked NYT article.
******* 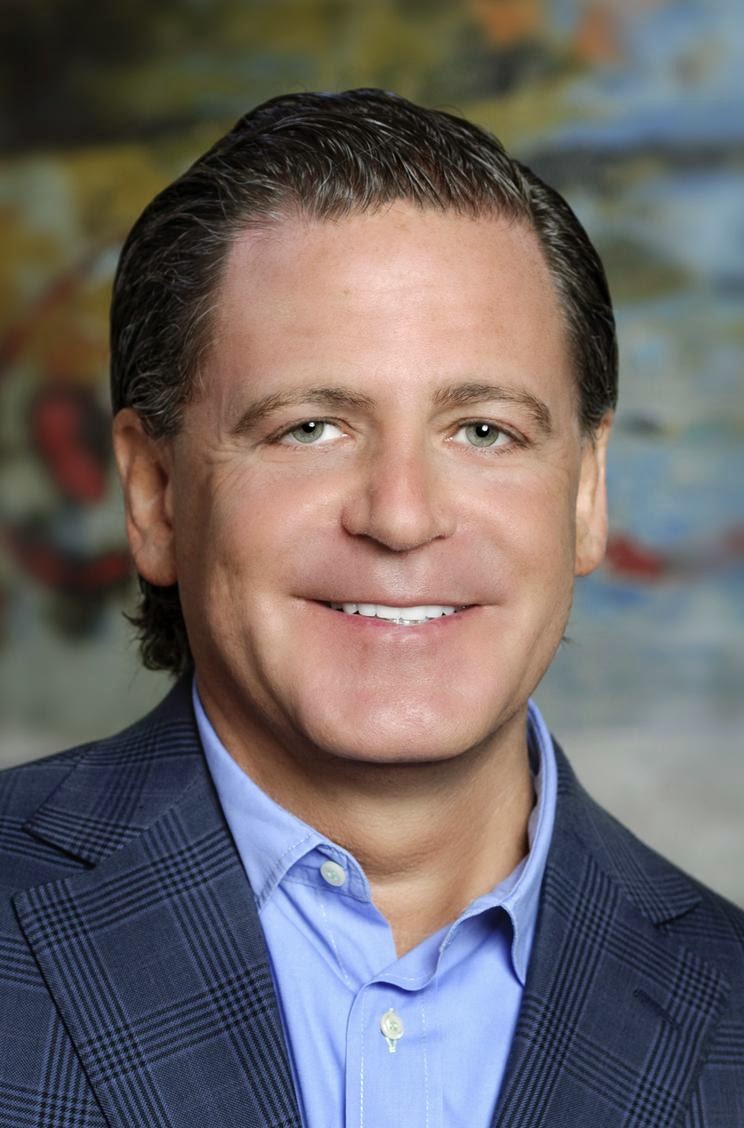 Gilbert is part of that tribe of American white males who fancy themselves self-made superman "makers" whose entire success, in reality, depends on the entire structure of civilization and the society around him while. Yet these men spout streams of claptrap, fund endless conspiracy theories and pseudo science, or concoct weird schemes* for their own benefit while their political minions have love affairs with awful Ayn Rand and her more awful works.


*To be clear, I personally favor breaking up California -- but more like into three states rather than six. But this would be part of a wholesale political reconfiguration of the number of U.S. States (about 75) and the sizes of the Senate (about 150) and of the House of Representatives (850 or so) rather than an unworkable and poorly-conceived California-specific plan without any chance of passing Congress.
*******


Detroit itself today basically resembles what it did in the 1977 post-apocalyptic movie Damnation Alley, except far scarier and more dangerous. The article includes the litany of statistics and facts from numbers of blighted buildings being razed to all the water shutoffs to lethal levels of urban crime and dysfunction. (Who is the Mayor of Detroit these days? Does it even matter??)
POP QUIZ!


Identify the two real-life pictures and the one Damnation Alley scene picture of Detroit. 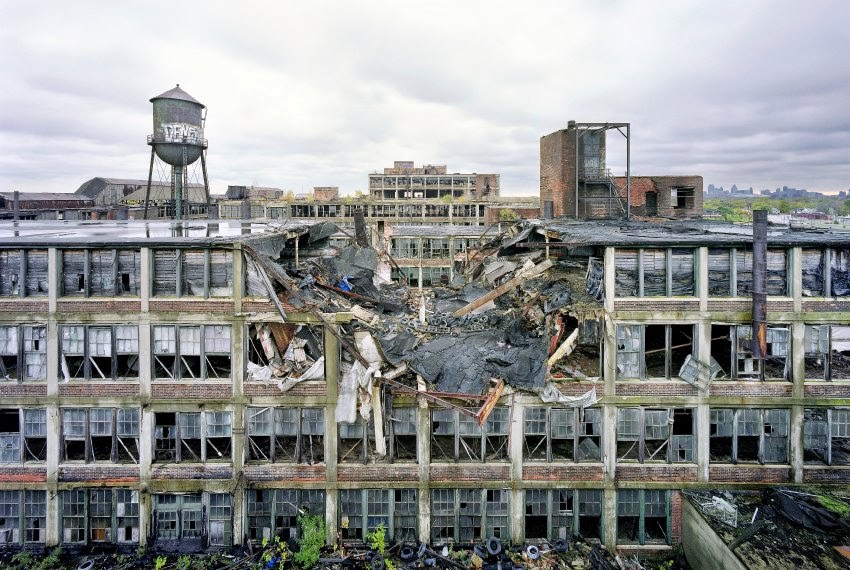 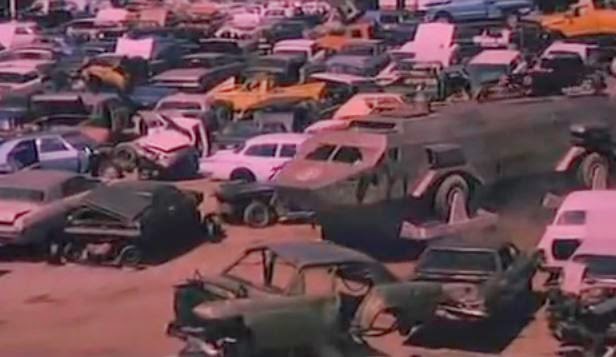 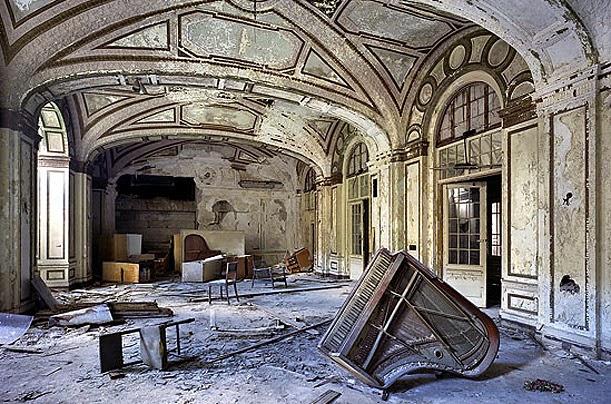 
It also admittedly takes a somewhat skeptical tone about whether this effort to "privatize" Detroit into some ridiculous Baghdad Year Zero-like hybrid libertarian / corporate oligarch / neoconservative fantasyland is going to bear any more fruit than the previous effort to "save" Detroit in the 1980s, as opposed to just ending up a big mess outside the domed Imperial Emerald City. 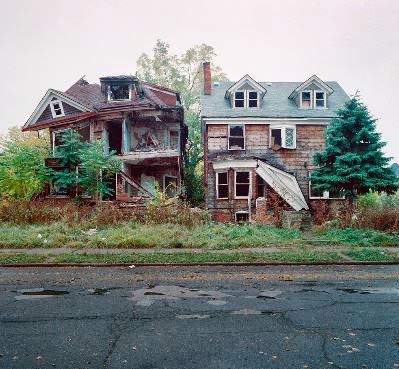 About those statistics: Of the original 380,000 properties in the city's 139 square miles, over 114,000 already razed with another 80,000 or so to go; only 35,000 streetlights of the 88,000 functioning; widespread severe urban dysfunction and a breakdown even in basic services with ever-spreading water and other shutoffs; over 10,500 houses sold just last year at fire sale prices in speculative schemes; and a plummeting population (down 200,000 between 2009 and 2012 to 701,475) that -- aside from some white yuppies and hipsters moving in as would-be colonists -- consists of deeply and intractably impoverished African Americans. 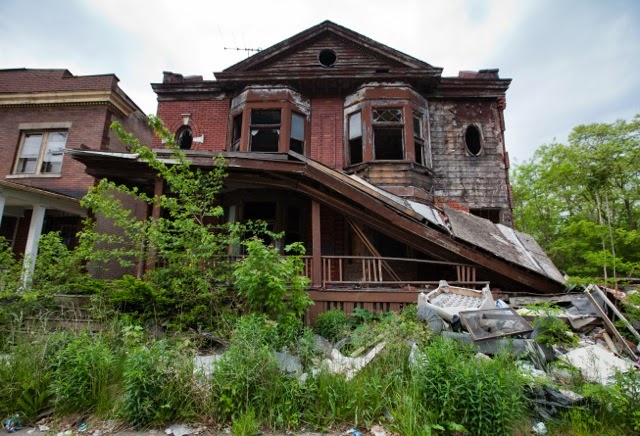 The article's comment section (which now seems to be closed / have vanished) included a number of comments by native Detroiters that were informative. (The New York Times has dedicated staff for approving every comment that appears -- as Paul Krugman once wrote on his NYT-hosted blog, "The New York Times, she is a Victorian lady" and no profanity is allowed. Neither is the ocean of verbal garbage and written sewage you get following any Yahoo News article.) 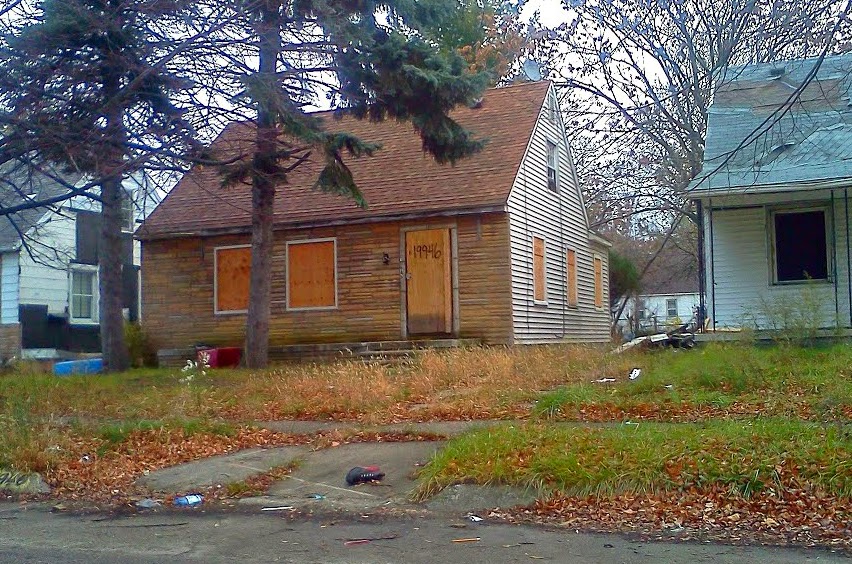 This is the house at 19946 Dresden (Street?) that as the childhood home of rapper Eminem. It was featured on one of his releases. The house has since burned down and been razed. Well, the name "Dresden" is certainly appropriate.
*******


Anyway, as for the Quicken enterprise in Detroit, it's the perfect embodiment for early 21st Century America: 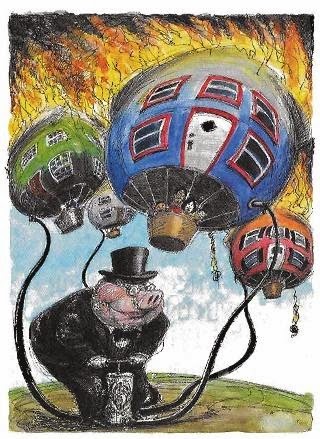 Fee-skimming middlemen and Wall Street financial bubble-blowing through a shadow banking system involving sky-trillions in "tranches" of CDO "insurance" on vast numbers of robo-signed highly risky loans taken out by people who can ill afford, and all the banksters and fraudsters ready to be taxpayer-bailed-out at a moment's notice, no questions asked.


Meanwhile, all across America, Joe Six Packs and their families are evicted by the cattle car. Yet large numbers of people -- including in that very group -- blaming poor people for the situation, all thanks to America's long-time loop ideology and present-day everybody-hates-everybody politics. 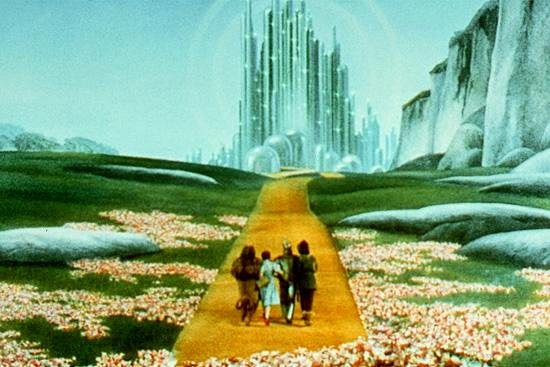 And across the Detroit River: Gleaming Canada, practically a utopia by comparison, extracting what it needs from the rest of the world while blissful in its Zen-like unawareness of anything. 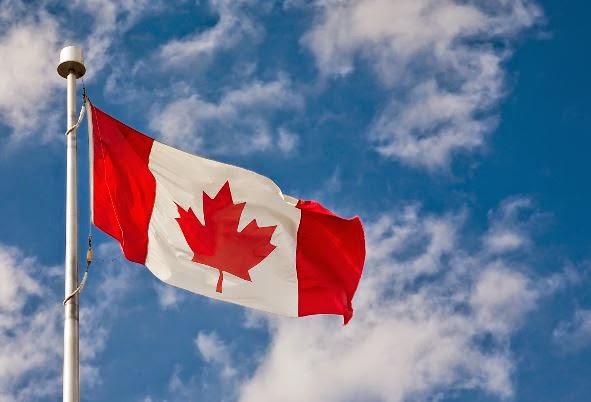 As for Gilbert's plan, if all goes well, perhaps Sally Quinn can hold one of her dinner parties at the GM Renaissance. But to get to that point, what we really need is Tory ex-pat Sebastian Mallaby and his beloved "Washington Consensus" Crowd to tell us one more time how "More Free Trade" for the benefit of China can turn around Detroit. And his hop-along sidekick, Benjamin "Benji" Wittes, the special legal needs one of the Washington Consensus and tool of the military / industrial / surveillance state complex, can explain at a BROOKINGS PANEL how those who fail to fall in line with this Brave New World should be locked in Guantanamo Bay -- a thousand more of which should bloom because it is such "a model facility" -- and just "drone" the troublemakers. Oh, and let's invite James K. "DOW 36,000 BILLION" Glassman as that charismatic huckster to do some "journo-lobbying" for whatever corporate oligarchical paymaster he's serving on this day.


I am aware that I harp on this "Washington Consensus" issue often on this blog, but it's because I find it so profoundly immoral. In the last 30 years, pretty much EVERYTHING you've been sold from Reaganomics / supply side voodoo to Free Trade helping the working class to whatever financial bubble Wall Street is blowing to the excusal of the Bush 2000 election theft to Iraq / WMDs to the demands for austerity in the face of the Great Recession has been a FLIPPIN' BIG LIE that serves only the class interests and fixations of the overclass they represent to which they belong. They truly are the imperial court of a late-stage empire.
*******


And with that, I shall now sign off. My next planned update won't be until late Wednesday / early Thursday.
--Regulus
Posted by Regulus at 2:40 AM