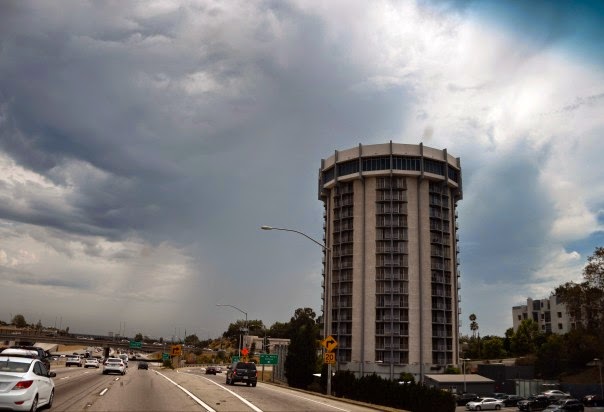 
This entry notes a most unusual -- and tragic -- weather event that struck Southern California on Sunday: A genuinely freak summer thunderstorm swept over Venice Beach and generated a lighting bolt that killed a 21 year old man* and injured at least 13 others including one critically. 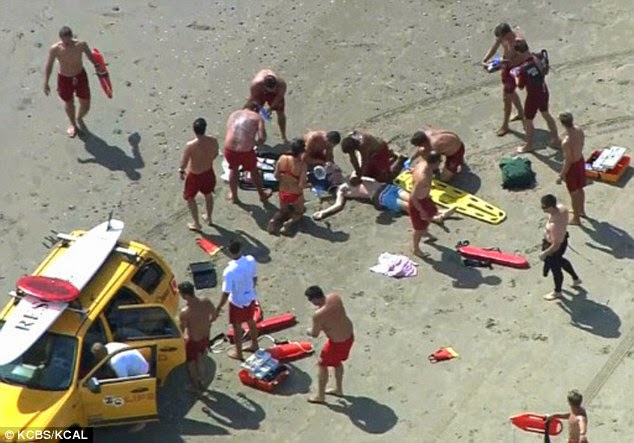 A lightning strike victim is attended to by lifeguards and paramedics, Venice Beach, Calif., July 27, 2014. (I'm unsure if this is actually Fagnano himself.)
*******


The man who was killed has been identified as Nick Fagnano while the critically injured man is said to be a 55-year old off-duty lifeguard. Still another person was struck by lightning on Santa Catalina Island while playing golf but was treated and released. 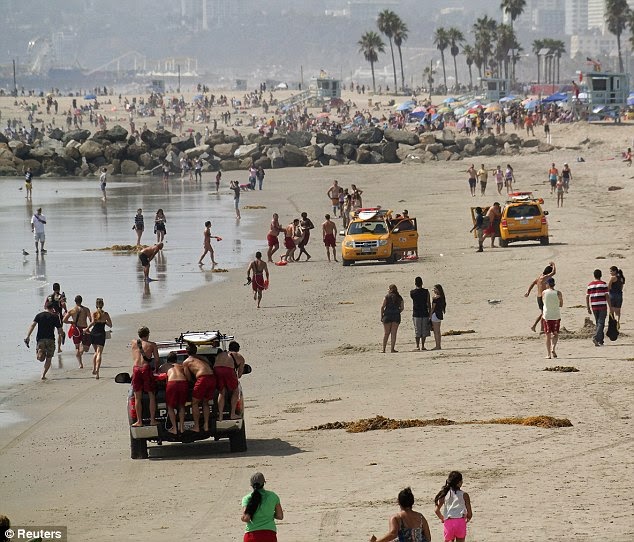 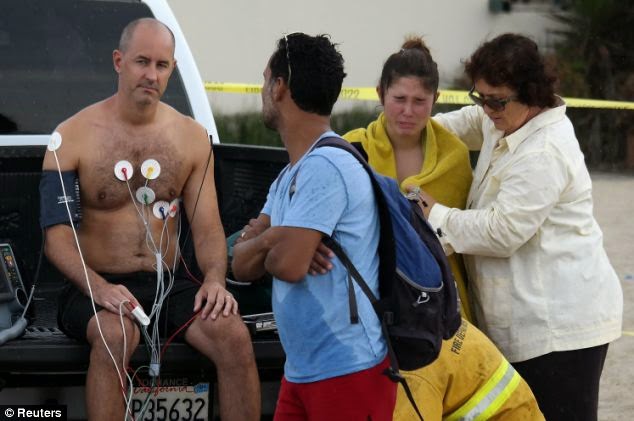 A man is treated by paramedics following a glancing strike while another young woman is comforted in the aftermath of the Venice Beach, Calif., lightning strike, July 27, 2014.
*******


Fagnano was in the ocean when the lightning bolt struck, sending a huge electrical charge through the nearby seawater and electrocuting the swimmers and surfers. It took some time to get Fagnano from the water and transported to a nearby hospital where he was pronounced dead.
*His age has been variously put at 20 or 21. 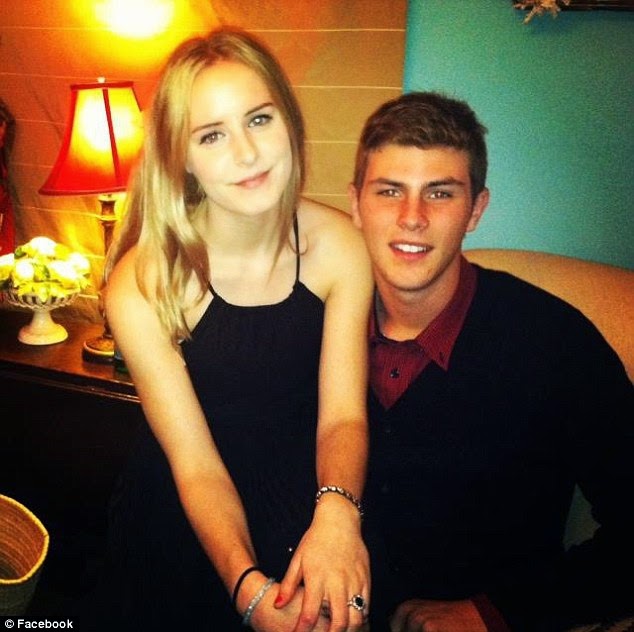 Lightning strike victim Nick Fagnano and a companion in an undated photo.
*******


This article in the Los Angeles Daily News has a little more information on him including the fact that he was a 2012 graduate of Notre Dame High School in Sherman Oaks, Calif., had also attended Santa Barbara City College and Santa Monica City College, and was about to entire the Univ. of Southern California (USC) as a junior.
He was an only child. His Twitter page is (for now) here. 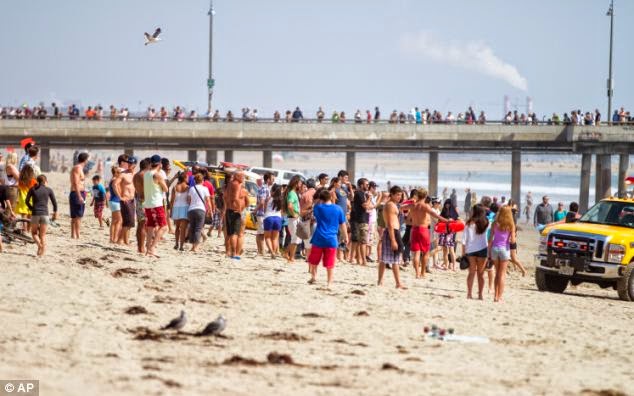 Beachgoers and pedestrians on the beach and pier in Venice Beach, Calif., following the freakish lightning strike that resulted in multiple casualties, July 27, 2014.
*******


Summer thunderstorms in Southern California, specifically, the L.A. Basin, are exceedingly rare (a bit less so on the Mojave Desert). And what a freak way to die in Southern California -- and in mid-summer, no less.
For the weather record, the storm dropped a daily record 0.14" of rainfall at Los Angeles Int'l Airport climate station (KLAX) while a trace of rain fell at the downtown Los Angeles (USC) climate station (KCQT). (Indeed, KCQT recorded "Trace" on two consecutive days, the 27th and 28th of July.) Meanwhile, Long Beach Airport (KLBG) reported no precipitation.
The weather that day -- and indeed for the period Friday through Monday -- featured an influx of warm, moist air from Mexico as a monsoonal area of low pressure moved northward into Arizona. 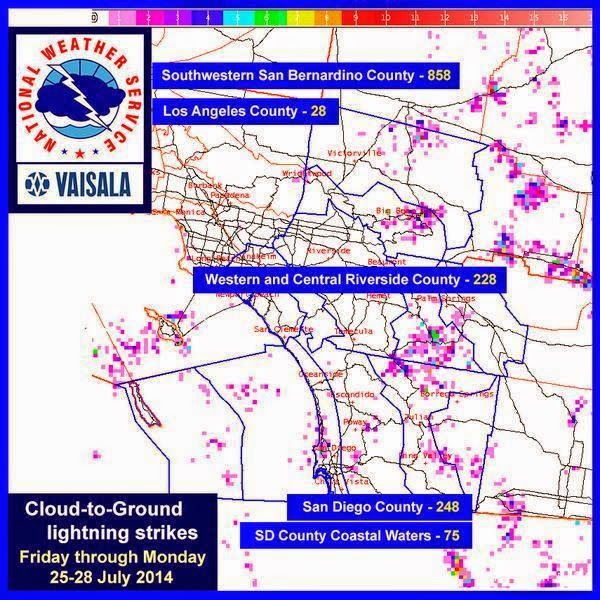 
As reported here (whence comes the above map) over 1,400 cloud-to-ground lightning strikes were recorded in Southern California in that time including 28 cloud-to-ground strikes in Los Angeles County. The bulk were in San Bernardino County.
Again, a highly unusual weather event (if not pattern) for the Los Angeles area in summertime.
This UK Daily Mail article has a lot of pictures of the chaotic aftermath of the lightning strike. 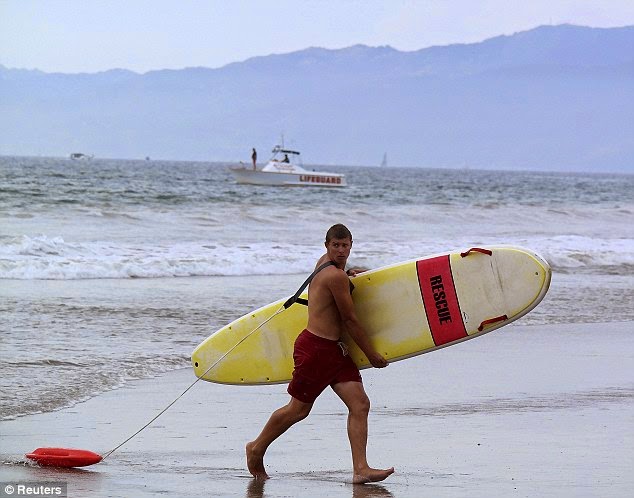 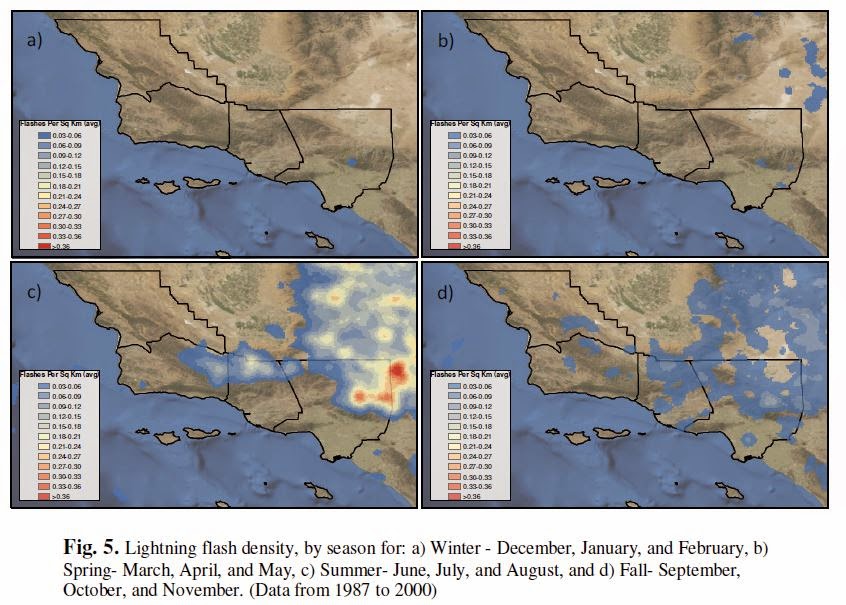 
To reiterate, it's not that lightning strikes in the L.A. Basin never happen -- as the figure above and below from this report shows, they certainly do -- but rather it is the time of year and the location that is so strange. 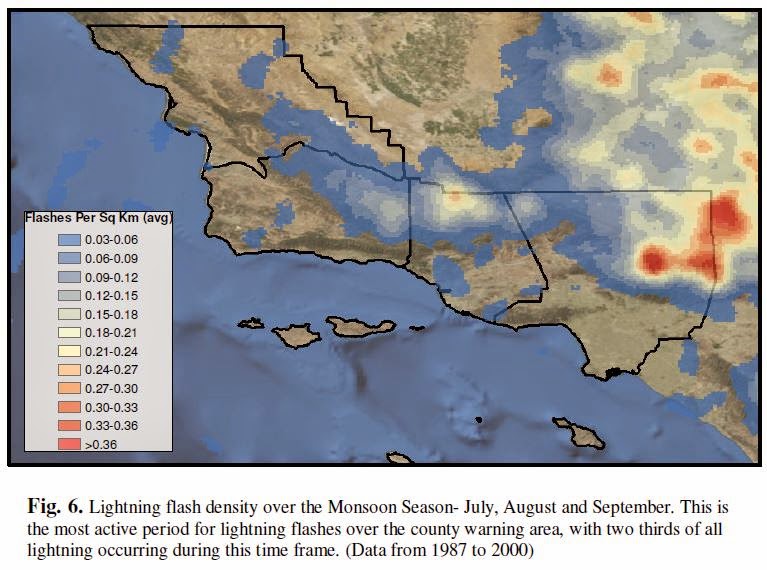 Lightning flash density for the LOX WTO's county warning area (CWA) for the "monsoon season" of July, August, and September based on data for the period 1987 - 2000. (This is basically a close-up of panel (c) above.)
Even this time of year, the flash density for the area including downtown Los Angeles and Venice Beach is effectively zero. You have to get into the San Gabriel Mountains and Antelope Valley to experience any significant lightning.
*******


As an aside, while I never actually been to Southern California -- it is the one corner of the country I have totally missed* -- I have long been fascinated by its (lack of) weather and those (rare) instances when that weather is stormy and unusual including thunderstorms, out-of-season rainfall, and exceedingly rare intact tropical cyclones (tropical storms and even hurricanes).
*I don't count flying through LAX from IAD en route to Honolulu in 2002, though I did see the L.A. Basin from the air.
******* 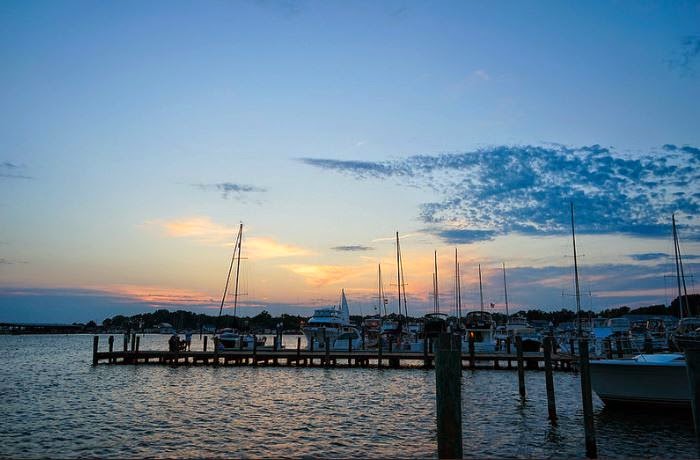 
As for our weather in the D.C. area, it continues to be very quiet and unusually mild (i.e., not hot and horribly humid). There have actually been record lows, in particular at the BWI Airport climate station (KBWI). Here is a useful CWG blog entry on all the KBWI record lows this July and his year -- and why that isn't quite as odd as it sounds and doesn't "prove" GOP/Talk Radio global cooling fantasies.
OK, that's all for now.