Fire Alarm Bells, (Tropical) Storm Warnings, and My Krugmania: Season's Greetings in Early July (UPDATED - Will Arthur Do As He Pleases??) 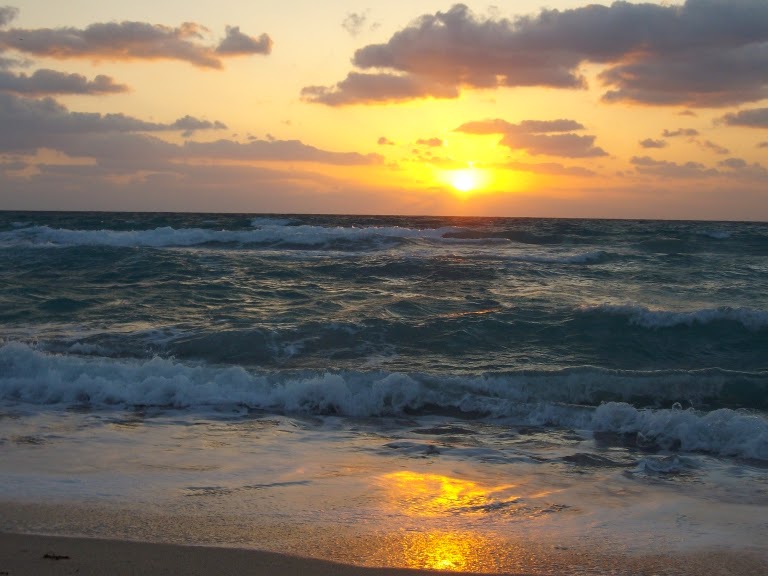 Sunrise on the Florida Atlantic coast (not sure exactly where but quite possibly not that far from where my dad lives).
This picture is now the background image on my new computer as opposed to the one of the Drumbeat yacht somewhere on the high seas.
******* 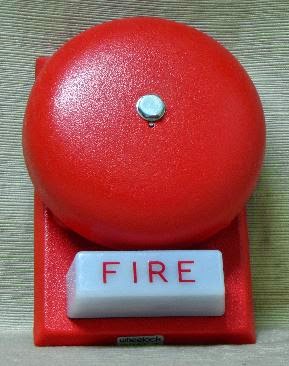 Tonight I went to the gym and had a decent workout, although the fire alarm went off the building -- or rather, in the complex of new structures that stretches from the corner of 14th and W Streets NW eastward to include (on the north side of the 1300 block of W St.) the 14W condos, Kapnos, a sweetgreen, and the Anthony Bowen YMCA (where I go).


I was just about 10 minutes into my treadmill jog through parts of New Zealand when it sounded. (Earlier today, I was looking on the New Zealand government immigration process website, but that's a separate topic.)
Everyone had to exit building quickly, and the two fire trucks from Engine Co. No. 9 (the one right by my apartment building and that I got to know up close and personal one awful night nearly two years ago) within a few minutes. But the alarm abruptly stopped and within a few minutes everyone was allowed back in. I restarted from the beginning my hour-long jog. I also did some weightlifting and went into the pool for about 22 minutes.
******* 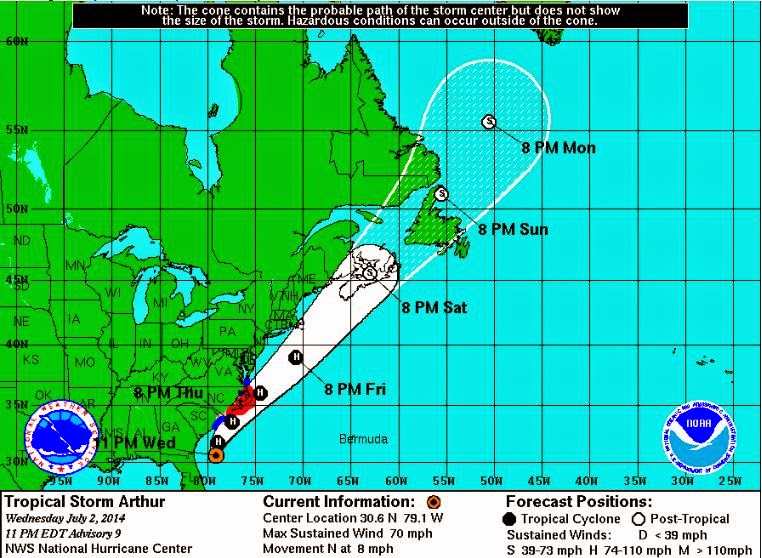 
Weather-wise, Tropical Storm Arthur (and as of 11PM EDT July 2nd, it still is a  tropical storm rather than a hurricane) is expected to brush the North Carolina Outer Banks as a category 1 hurricane in the wee hours of Friday (July 4th) but miss the D.C. area entirely. 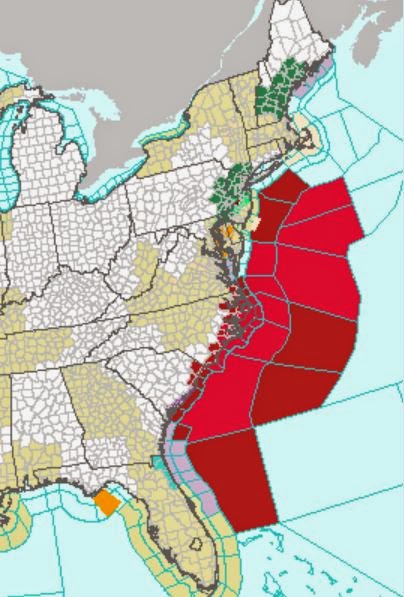 NWS weather advisories for the eastern third of the U.S. and adjacent coastal waters, updated 0357UTC July 3, 2014.  The reds and crimsons are hurricane warnings and tropical storm warnings, respectively. This map contains no (magenta-hued) hurricane watches.
FYI: The weather advisories in the eastern and central U.S. are by county while in the western U.S., they are by local climatic and topographical zone. The offshore districts to some extent are based on seafloor topographical features that serve as convenient break points -- e.g., Hudson Canyon, Norfolk Canyon, and the continental slope waters -- as well as on the placement of onshore human places (such as cities).
*******


The Weather Channel is in high-vendible, Jim Cantore-wind-up doll, freak-out mode. Putting aside the clown act of that perpetual motion profit infotainment machine, the National Hurricane Center of the National Weather Service should be your go-to for information. 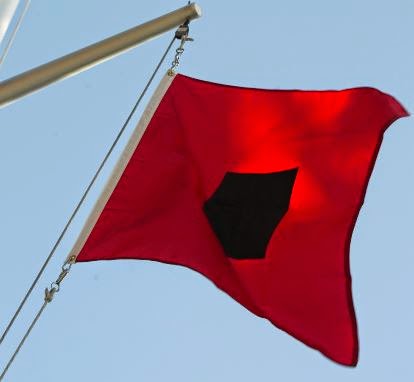 
It tried to rain tonight -- there were some t-storms in the area -- but it basically failed to do so in the District proper (and, probably, at KDCA itself). We seem to be going into a rain-constipated period here in D.C. Thunderstorms (not associated with the tropical system but instead a front that will sweep it out to sea) are forecasted for Thursday but I'm not optimistic. 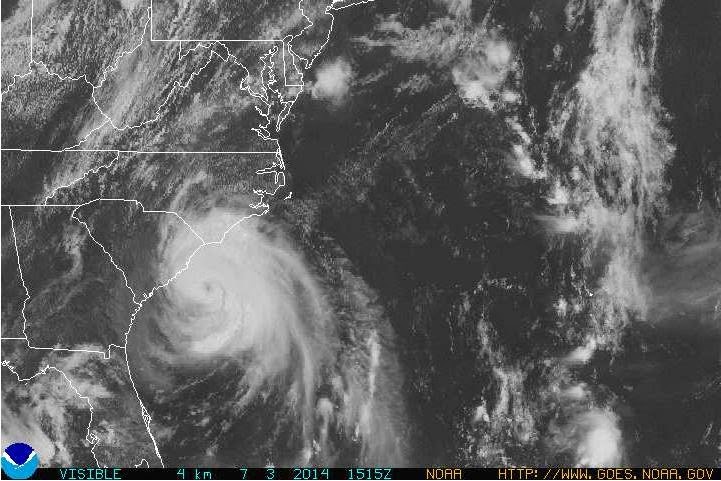 
So Arthur became a hurricane overnight and is now a category 1 such storm on the Saffir-Simpson scale with top sustained winds of 90-mph located 110 miles SSW of Cape Fear, North Carolina. The central pressure is 981mb and the storm is (as of 11AM EDT today) moving NNE at 10-mph, so the re-curvature is already underway. 
Arthur is forecasted to track across the Outer Banks, possibly making landfall between Wilmington and Cape Lookout. The storm is forecasted to intensity to a category 2 with top sustained winds of 105-mph before it interacts with a large mid-latitude trough (with attendant cold front) moving off the Eastern Seaboard late tonight into tomorrow. 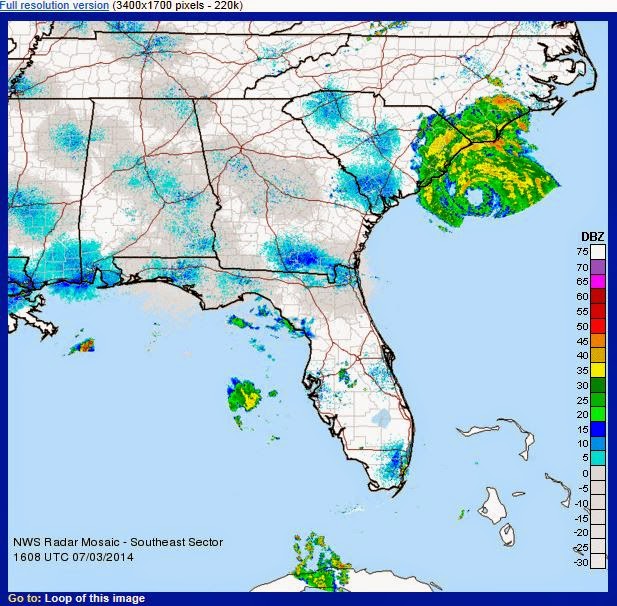 
This will cause the storm to transition to an extratropical cyclone even as it is accelerated on a northeasterly track. The storm should strike Nova Scotia by Saturday morning as basically a nor'easter and continue on its way toward Newfoundland and, eventually, the southern tip of Greenland, dissipating and being absorbed into whatever trough happens to be passing by or lurking around up there. 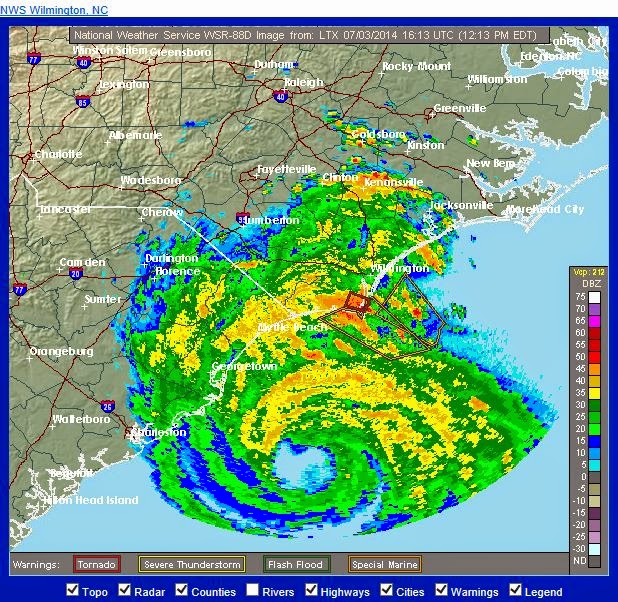 
No direct effects are likely in the Baltimore / Washington Metro areas but there could be strong winds, rain, and turbulent seas along the coastline including the Jersey shore, south shore of Long Island, and eastern New England.
This is a very typical U.S. East Coast scenario, although it is a bit odd to have a hurricane brushing the shoreline right on July 4th (I don't recall that situation). 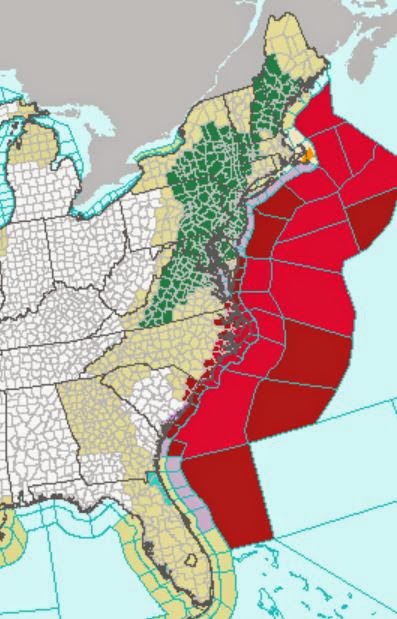 
However, there are widespread flash flood watches in effect for the mid-Atlantic into New England, although that seems to be more a function of the thunderstorms that the approaching cold front will trigger. I'm not exactly sure why we have flash flood watches up for the entire D.C. area. I'm doubtful we will see that much rain to justify it, but I defer to the NWS. 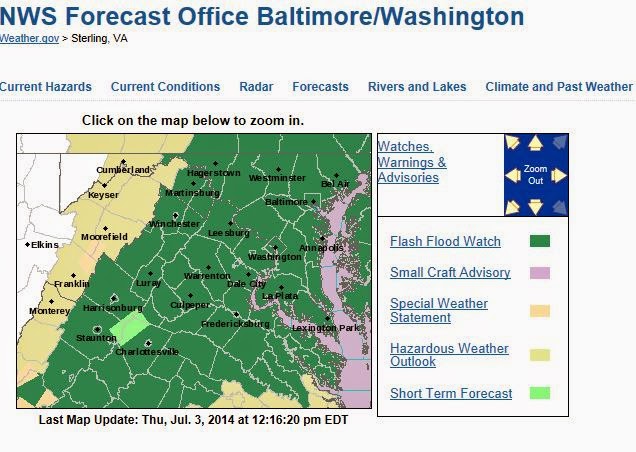 
Workwise, my day was not particularly productive, and indeed, as Gary remarked, this week has had a lot in common with that interlude between Christmas and New Years in that respect. But for me, this was due to lack of sufficient billable work of late. However, I had some good news about more billable work this month that combined with the two weeks' worth I have on BA issues set to get underway next week should get me through July, and by that point, there should be some clarity / a decision on a significant new project. All that aside, I am taking tomorrow off outright (not sure what to do -- walk or bike and then go to a bar) ahead of the Independence Day holiday, which this year conveniently falls on a Friday. 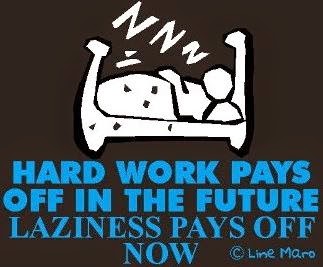 My Krugmania: A Continuing Series ...


Lastly, and speaking of things productive, I would like to discuss this Paul Krugman blog entry from Wednesday, July 2nd, 2014 (link embedded): Trick or Tweak.
Prof. Krugman basically politely calls bullsh!t on a nearly 6,200-word article  by Sam Tanenhaus that is slated to appear in the print edition of the upcoming New York Times Sunday Magazine (July 6, 2014) but that is already available online. The article is (link embedded): Can the G.O.P. Be a Party of Ideas?

The GOP "thought leader" powerhouse that will lead the Republican Party to its Jesus-Saves-at-Walmart Millennial Reign. Right. (Who knew Kate O'Beirne was still kicking? Last I saw her, it was 1997 and she was scowling about Bill Clinton on "Inside Washington," Gordon Peterson's unwatchable show during the heyday of the High Washington Consensus epoch.)
*******


That insomnia-cure of an article focuses on the work approximately a dozen or so "reform conservatives" -- the "reformicons," pictured above earlier this year at Gunston Hall in Virginia -- in the commentariat and foundation-funded GOP D.C. think tank world to develop "new ideas" to help the Republican Party in its long-term appeal to a broader array of voters. 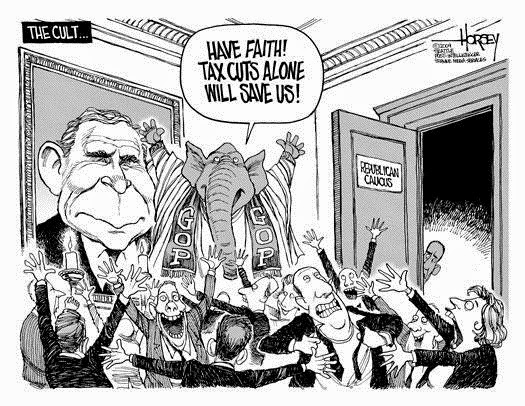 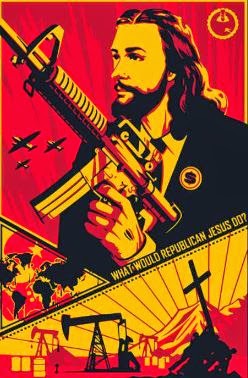 This would-be appeal stands in contrast to the GOP's current cult-like quality of rightwing corporate oligarchs and random delusional billionaires at the top and a fearful, Fox News paranoid bottom that is dependent for its survival on America's arcane 19th Century political structures that keep the emerging liberal and nonwhite majority holed up in gerrymandered and under-represented urban enclaves.


(No, the article doesn't go into all that -- rather, that's my take on why we even need to "engage" the GOP.) 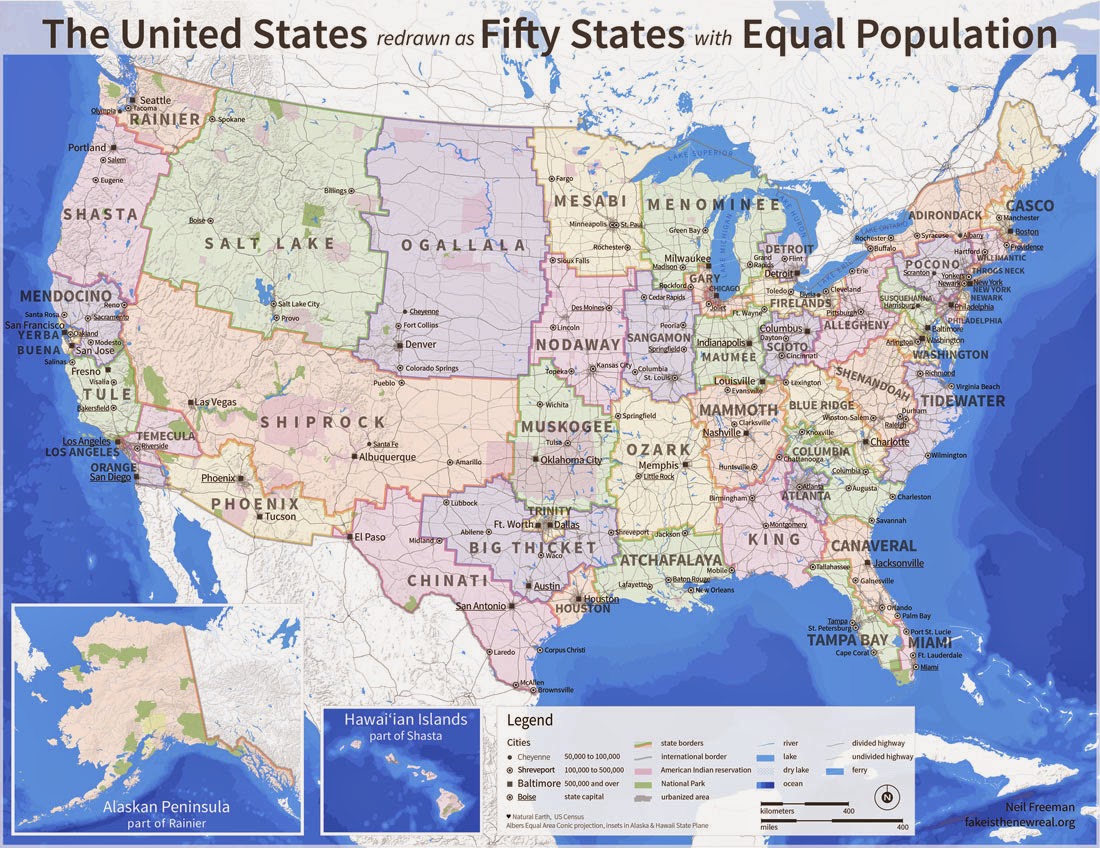 The 50 U.S. States re-divided so that each new state (some with fanciful and odd names) has an equal population. As I recall, this map came out in 2013. CLICK ON IMAGE FOR LARGER VERSION.
Such a redesign would resolve the Senate's disproportionate representation of low population states while keeping the number of states the same and thus the upper chamber's size fixed at 100 members. (I agree with Michael Lind that the U.S. should have more like 75 states at this point). However, even this redesign would not resolve post-Census 2010 Republican gerrymandered Congressional districts inside states.)
*******


Of this incredibly lengthy and dissatisfying piece by Tanenhaus, Paul Krugman simply states as a reply to the headline question (emphasis added): "Why, no. This is another edition of simple answers to simple questions ..."
Prof. Krugman goes on to say ... 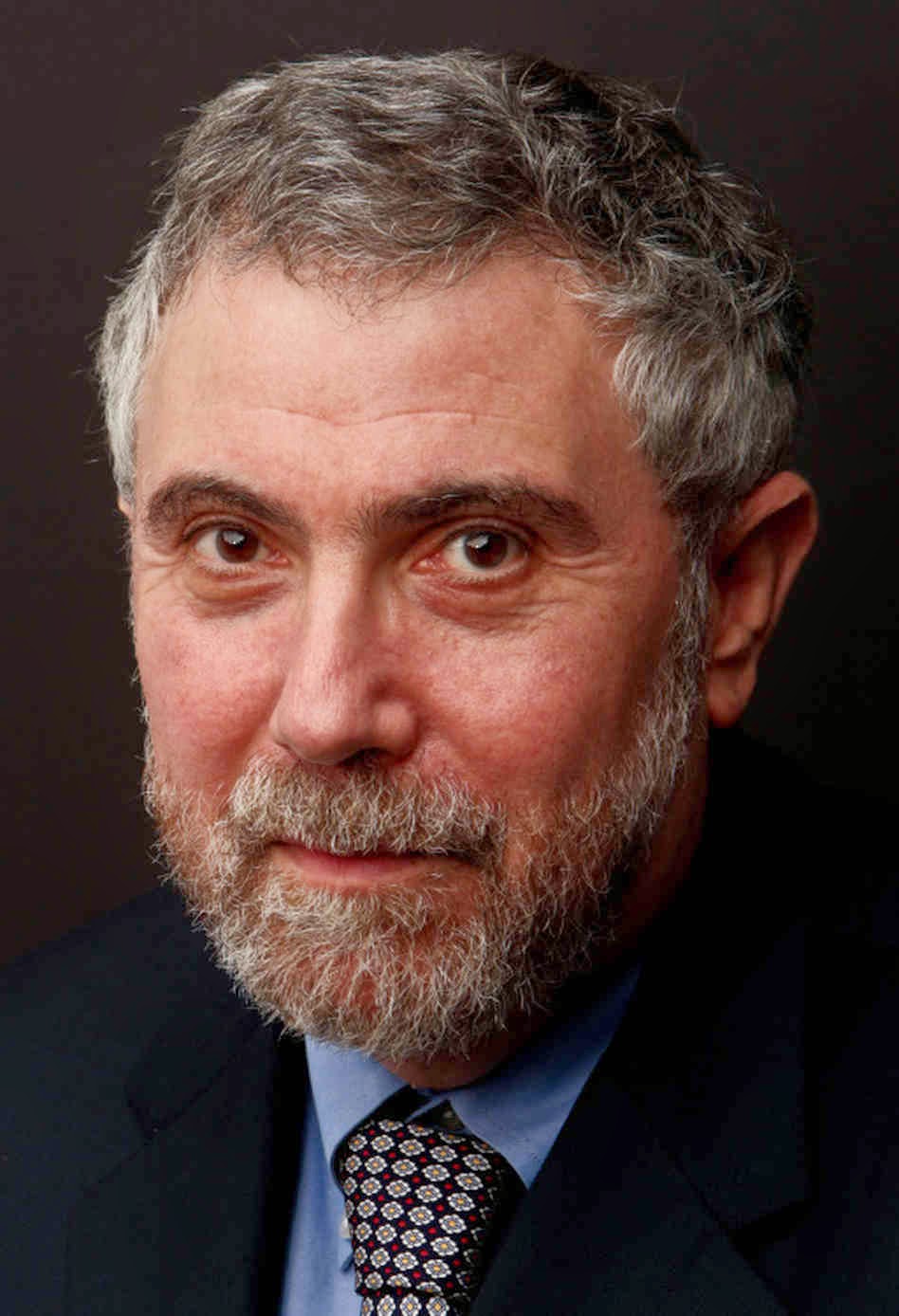 "[T]he whole notion that new ideas are what politics is about is greatly overrated. Governing isn't like selling smartphones; the underlying shape of the problems you have to confront changes quite slowly, and the basics of policy debate are quite stable.

In particular, the central policy debate in US politics hasn't changed in decades, nor should it.


Liberals want a strong social safety net, financed with relatively high taxes, especially on high incomes. Conservatives want much less of a safety net, and much lower taxes on the affluent.
Thirty-five years ago conservatives did produce a new argument -- the claim that high taxes and generous benefits were producing such a drag on the economy that even lower-income Americans would be better off if we slashed all of that. And they got most of what they wanted -- much lower taxes on top incomes, an end to welfare as we knew it, though not to the big middle-class programs. But growth failed to take off while inequality soared, so that the income of typical families grew much more slowly after the conservative revolution than before: 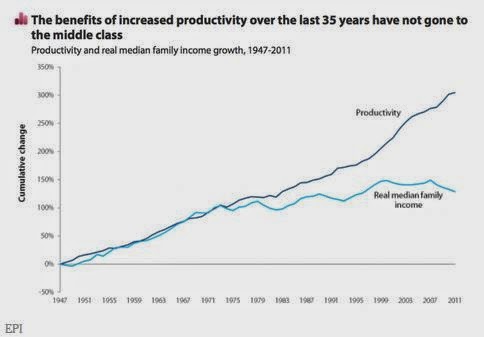 [A graph showing the growth in both cumulative growth in productivity (dark blue line) and real median family income (light blue line) between 1947 and 2011. The huge divergence starts in the early 1980s with the Reagan era, and that's not a coincidence.]
After posting the above image, he concludes:
"So much for that big idea. Is there anything like that on the horizon? No -- and it's not clear why you should expect anything of the kind. What's certain is that tweaking policy at the edges isn't going to do much.
And I suspect that at some level the reform conservatives know this. The point of their proposed policy tweaks, I'd argue, is less to achieve results than to let the GOP dissociate itself from soaring inequality and stagnating incomes, without changing its fundamental policy stance. And it's not a trick that's likely to work."
Let's hope he's right. And, yes, I'm well aware that Repubs are likely to do well in the 2014 midterms, but not only do I not give a sh!t, but in some ways, this is basically a meaningless proposition at this point (in a manner akin to whatever Obama's approval rating is at this precise moment). 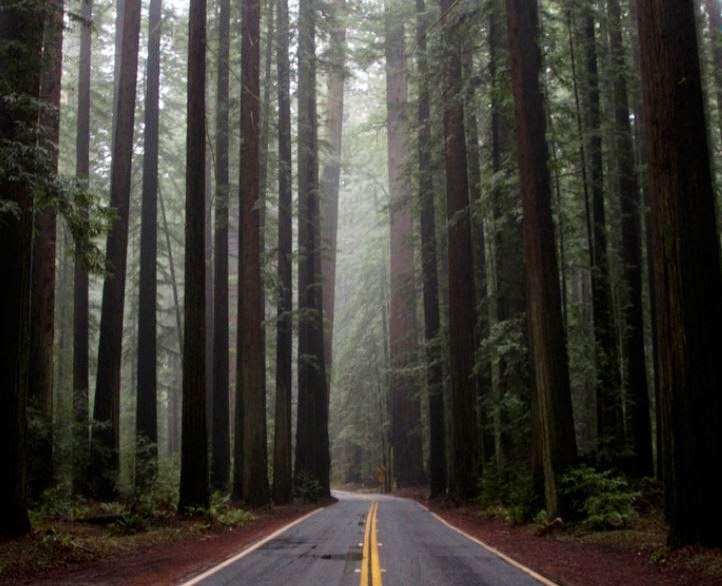 The awesome "Avenue of the Giants" in Humboldt Redwoods State Park of northern California. This image was featured as the California selection in a CNN article showcasing the natural wonders in each of the 50 U.S. States (one per state).
*******


OK, I was going to try to post my Sunday walk pictures in a subsequent entry but it is already 330AM as I post this entry, and even though I'm not going to work tomorrow (er, later today), I'm exhausted tired. I've been writing this while "listening" to my picture-scrambled (broken) television. of late-night comfort TV shows.
--Regulus
Posted by Regulus at 3:35 AM