Saturday Evening Post for June 28th, 2014: A Short Update on a Long Evening 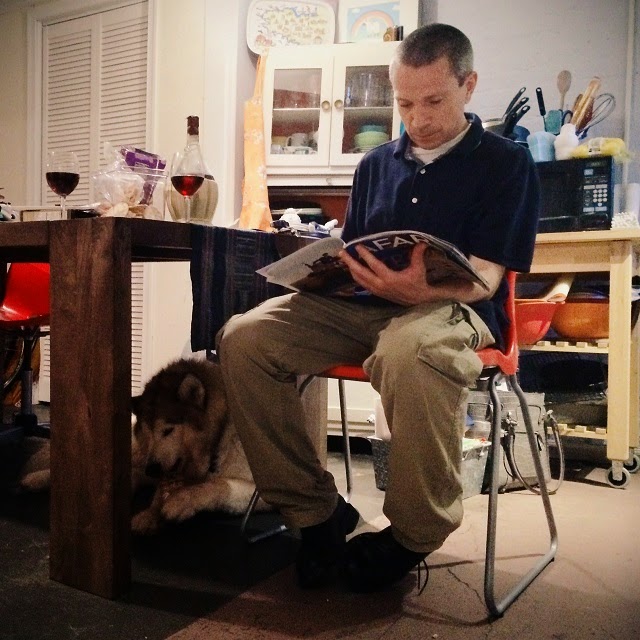 Yours truly with Wendy's dog Tacoma under the table gnawing on a plastic jar of peanut butter trying to get the last bits of it. This was at Wendy's place in Columbia Heights here in Washington, D.C., around 830PM last night, June 27, 2014.
*******


I had a good and complete gym workout this afternoon -- 6 miles on treadmill, weightlifting, and swimming.
While at the gym, I caught bits of the 2014 FIFA matchup between Colombia and Uruguay -- alas, Uruguay lost 2 to 0 and was knocked out of the running. Perhaps if Luis Suárez had been there to play ... But Suárez has been banned for four months (not to mention fined) after biting an Italian player last week in what was the third such biting incident in his career in recent years).
The U.S. plays Belgium on Tuesday in a must-win game. The U.S. lost to Germany 0 to 1 the other day but it is still in the running for now.
Anyway, last night, I went to No. 9 to meet Gary and then we went to Larry's Lounge, where I actually had an uncharacteristically good time. I walked home around 3AM and fiddled around on the computer until approximately 5AM, by which point it was getting daylight.
Speaking of which ...


We are now 1 week past the Northern Hemisphere summer solstice, but the actual latest sunsets -- 838PM EDT in Washington, D.C. -- are occurring right now in the period of June 26th through June 29th. 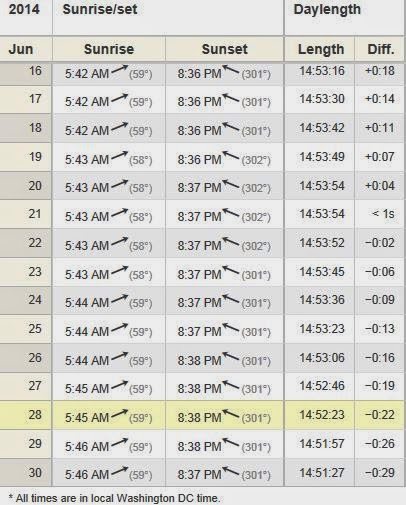 A portion of the table showing the sunrise / sunset time and length of daylight times for Washington, D.C., June 15 - 30, 2014. This is from the timeanddate.com site -- linked above -- that also contains information on astronomical, nautical, and civil twilight times and the time of solar noon and the distance of the Earth from the Sun on each day. It has this for cities all over the world.
*******


By June 30th, both sunrise and sunset times start moving in tandem to shorten the length of daylight. The opposite happens at the winter solstice (i.e., earliest sunsets are before the solstice itself and latest sunrise times follow it; it's just that the net length of daylight is longest / shortest, respectively, on the summer / winter, solstices, respectively). This has to do with the slight eccentricity of Earth's orbit and the resulting differences in orbital velocity (Kepler's Law!) versus a more or less constant rotation rate of the Earth itself on its axis.
I'm going to try to post a very quick jukebox Saturday night entry. However, it really has to be quick because Wendy and I have a 830PM dinner reservation at Marvin. (Maybe we can try to go to The Gibson next door, but I kinda doubt I'd be let in ...)
--Regulus
Posted by Regulus at 7:44 PM