On Semi-Hidden D.C. Speakeasys and Quasi-Fabled Places -OR- "Are you from England??" "NO!! BUT YOU'RE FROM TIMBUKTU!" 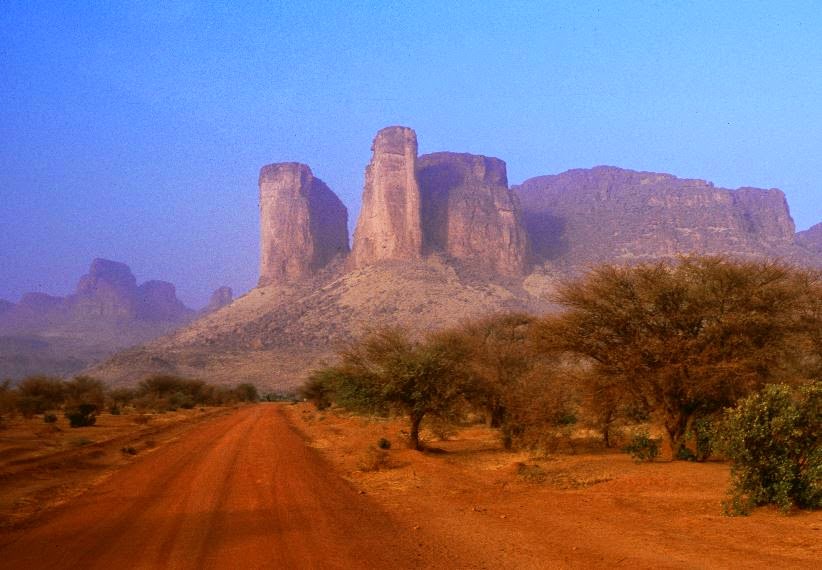 I'm not exactly sure where this picture was taken but it is somewhere in Mali. I don't think this terrain is part of Mount Hombori, the highest mountain in Mali (see below). Image source here.
*******


This is an entry that I started last Wednesday but never got around to posting. I have updated the entry, as necessary, to reflect that. I also posted three pictures that I took on Sunday in a shortened walk. (It should be clear which are those three.) 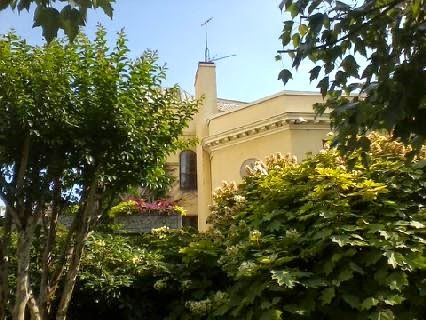 
When I wrote this entry on Wednesday night, I was having a turbulent stomach episode. Indeed, this cut my gym visit short that night. Nevertheless, I managed to get in the hour / 6 mile jog on the treadmill (New Zealand courses) and a half hour of light weightlifting, though I skipped the pool outright. Tonight (Monday night -- it's now Tuesday after midnight) I did another 6 mile jog (Trinity - Shasta course run); 50 minutes of moderate weightlifting; and 10 minutes in the pool. 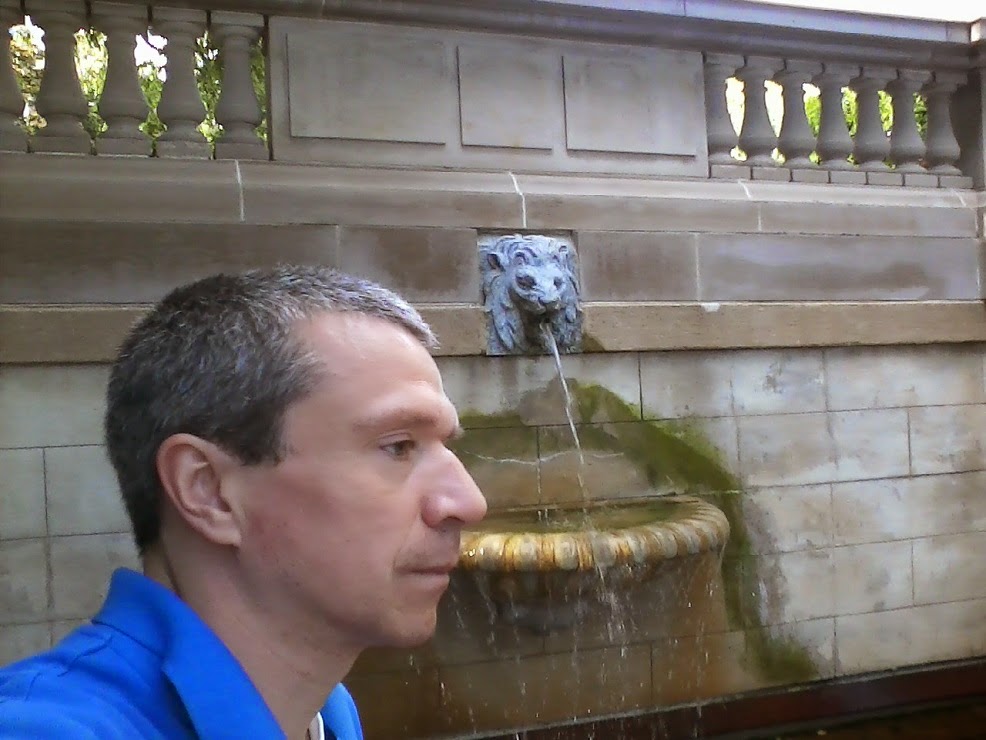 
I would have stayed longer except I had to meet Jim before he headed back to Milwaukee. We went to the downstairs bar at Marvin on U Street. The upstairs place was quite crowded. 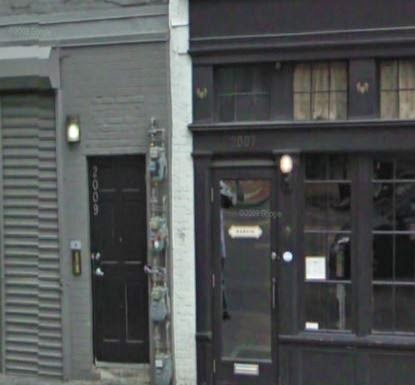 I also found out about a speakeasy -- yes, they exist in 2014, in a manner of speaking -- located next to Marvin called The Gibson, the "hidden" entrance to which is shown at left (you must ring a buzzer and be granted access).


I'd like to try to go there -- except I'm not sure I'd be allowed in. This falls in the category of the old Groucho Marx adage about never belonging to a club that would have me a member.
Oh, and apparently, there is ANOTHER quasi-speakeasy below the Doi Moi place (where I've never been) on 14th Street called 2 Birds, 1 Stone.
Honestly, though, if these places have websites, they can't really be true speakeasies. You want to see a speakeasy, I have one for you ... It's called "LaLo," and it's in plain sight.
Anyway, as for that Wednesday night turbulence ... 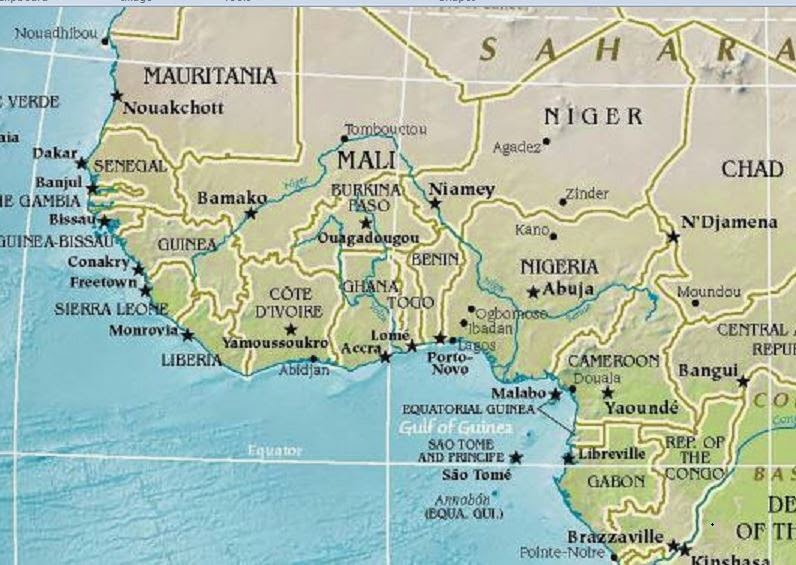 ... it was in the region of equatorial Africa, namely, in the vicinity of the Bight of Bonny / Bight of Biafra and Equatorial Guinea, so to speak.
And speaking of Equatorial Guinea and Africa in general, I have my old 1994 - 1995 Rand McNally New Universal World Atlas with me while in the bathroom. (Sometimes I have my 2004 Michelin North America Road Atlas and other times my badly frayed 2004 District of Columbia ADC Atlas.) I find staring at maps then therapeutic (or is it prophylactic??). 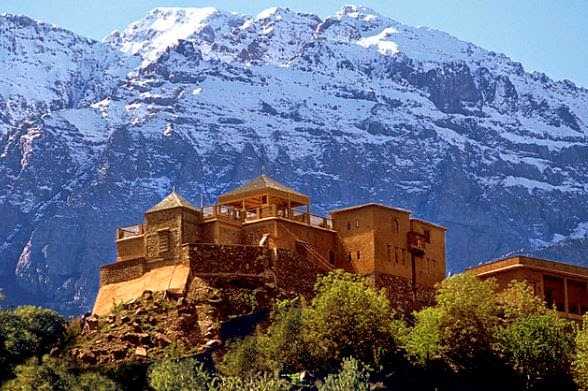 Snow-blanketed Mount Toubkal, which at a given height of 13,671 feet is the highest peak in the Atlas Mountains.
*******


Anyway, I was actually looking at a map of northwestern Africa including Morocco, Western Sahara (about which I wrote a little bit in this entry), and Algeria and the adjoining Mediterranean. One of the smaller ranges within the Atlas Mountains are the Anti-Atlas range -- which are actually the same range as the Appalachians dating back to when Pangaea was together, both raised together in the Alleghanian Orogeny before the Atlantic Ocean opened up and they were rifted apart. (Other portions of the larger Atlas Range such as the Moyen (Middle) and Haut (High) Atlas have undergone additional uplift in subsequent orogenies.)
As for Mali, it has its own mountains -- and some of them are distinctly strange looking, to wit, see the lead image of this entry and the one directly below. 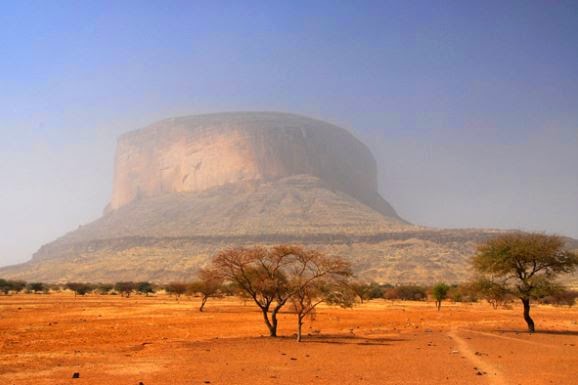 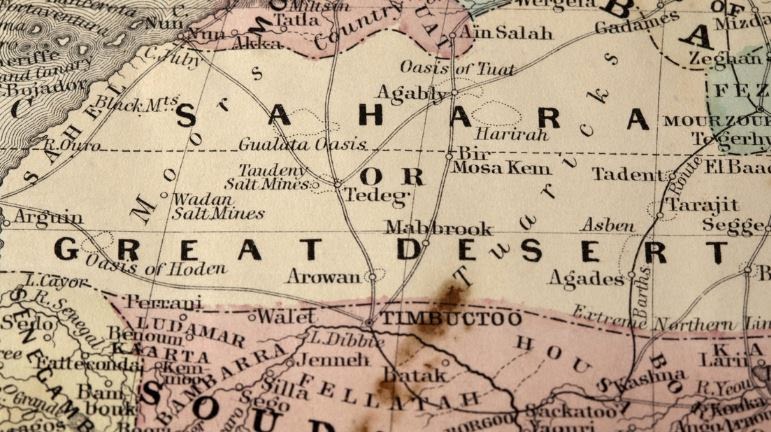 This map sectional also contains the northern part of Mali and has shown the name Tombouctou. It is referring to the Tombouctou Region, one of Mali's administrative regions. This is the French spelling of Timbuktu. As for the region's capital, that is, of course, the legendary city of Timbuktu. However, it's too far south to be on this map sectional. 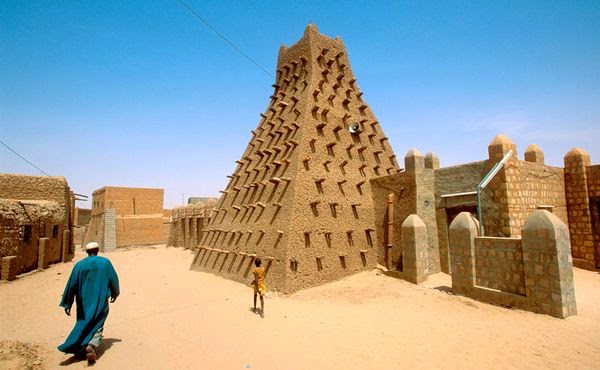 
Every time I see the name Timbuktu -- a famed city along a legendary desert trade route with a name that is synonymous with far away, fabled, and/or impossible-to-reach destinations -- I recall what I said as a bratty, shrill little 11-year old in Texas when I was living there (newly arrived from New Jersey and having a terrible transition time). It was early 1981 and I was in the 5th grade and at Peebles Elementary School in Killeen near Fort Hood (where my stepfather was stationed at the time). 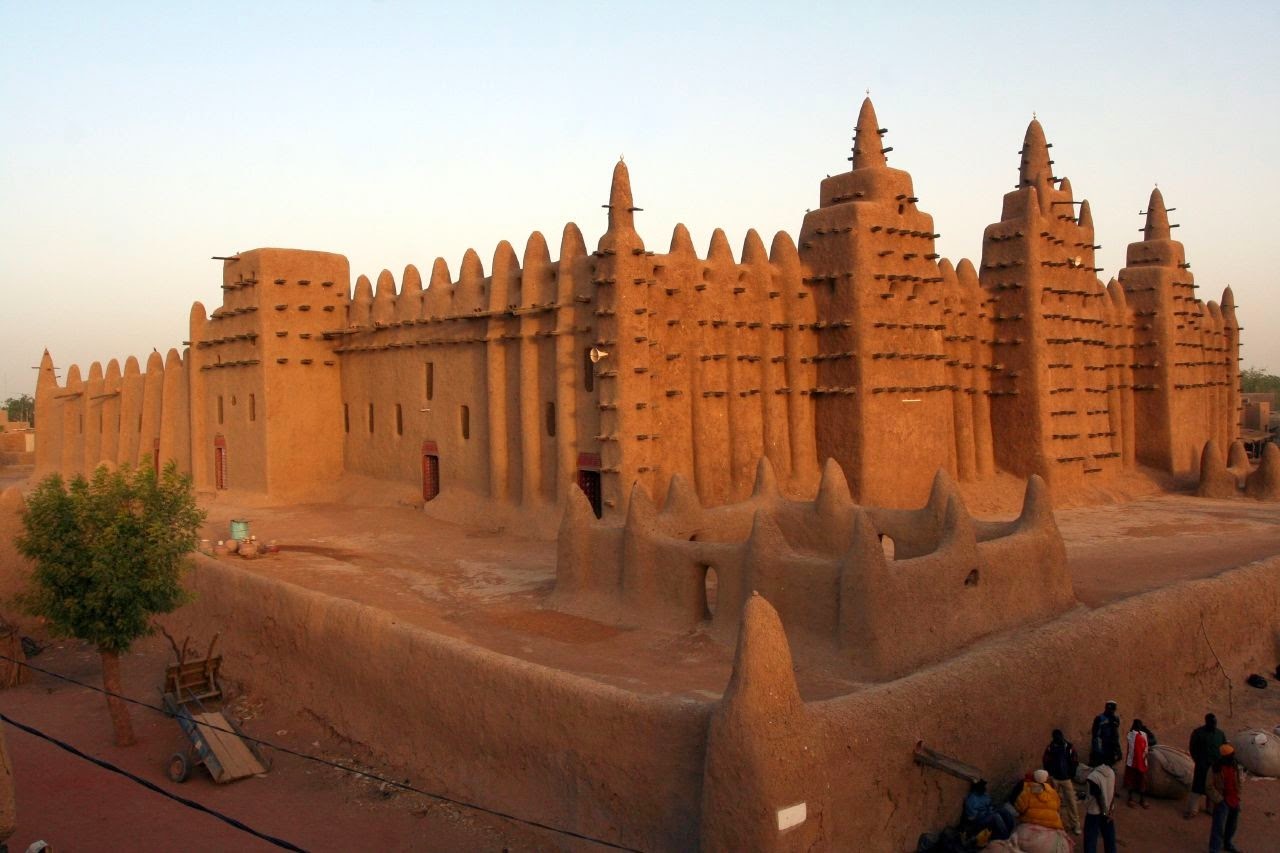 I *think* this is the full view of the Sankoré Madrasah, a UNESCO World Heritage site, though I can't tell for sure since there are at least two other historic sites. Islamic militants sacked the site in January 2013 as part of an ongoing civil war with an uncertain number of invaluable manuscripts destroyed.
*******


So to continue with the story, I was prattling away a mile a minute to whoever ("motor mouth" was the nasty name given to me in New Jersey by a semi-friend named Roger). This young girl (who may have been ethnic Indian, as in India Indian) then earnestly asked me in a slight accent of her own, "Are you from England?" I instantly replied in a shrill little bark, "NO!! BUT YOU'RE FROM TIMBUKTU!"
I remember it because another student heard it and thought it was hilarious, so much so that he would periodically recite it to me (which caused me to always recall the incident). 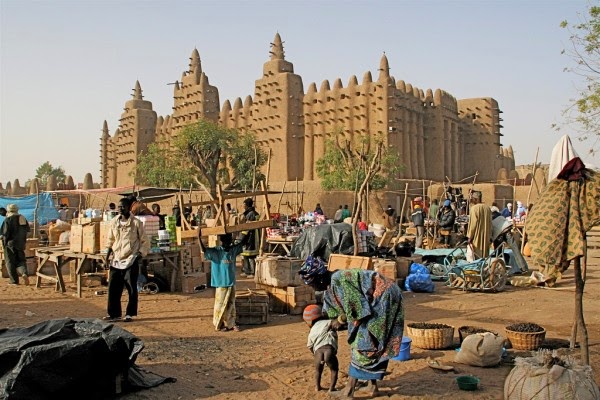 A crowd outside the same Timbuktu mosque and/or library shown above.
*******


What a sh!tty little brat and (as they say in England) prat I was. 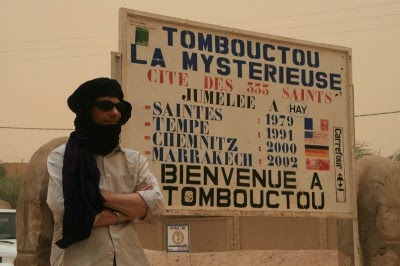 Oh, yes, and I also recall that back in New Jersey a few years earlier in the late 1970s, while on one of my regular weekend visits to see my maternal (Polish) grandmother in South Amboy* in her house on Henry Street**, that I wanted to watch TV but she wanted to watch what she thought was the colorful musical Timbuktu! (This was a 1978 Broadway musical and there were many commercials for it on local New York City television stations.) 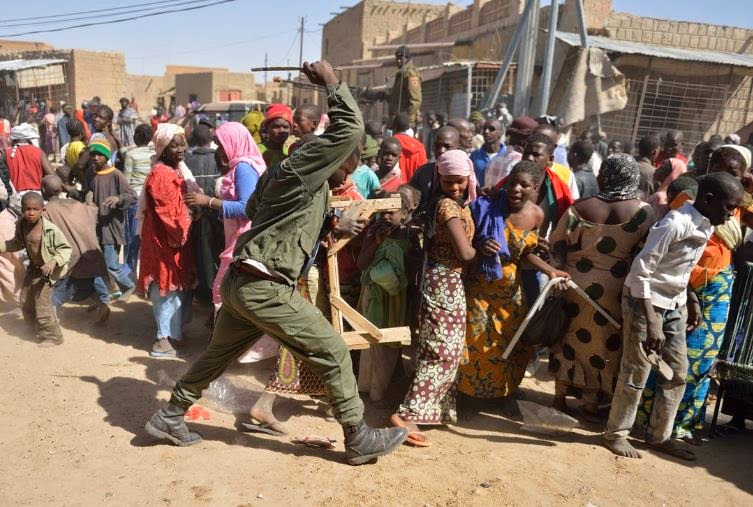 A Mali solider clashes with protestors in Timbuktu, January 2013. It was a very chaotic situation -- I'm still not entirely clear what happened or who was fighting whom.
******* 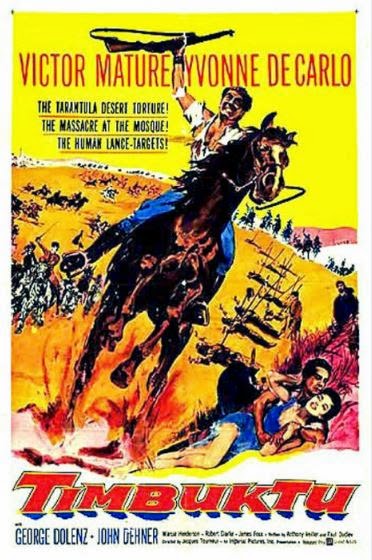 In point of fact, it was the 1959 black-and-white movie Timbuktu starring Victor Mature and Yvonne De Carlo (yes, that would be "Lily" from The Munsters) rather than the musical (which wouldn't have been televised at that time anyway). Grandma was disappointed while I proceeded to go on and on as though I "knew" it was the movie.


In point of fact, I had never even heard of the movie even as I got to watch what I wanted to (something stupid, no doubt).
Again, I was a sh!tty little brat and prat.
*I lived at the time in Long Branch with my dad and paternal grandparents.
**This is where my mom grew up and lived from 1948 - 1967, and where my deeply reclusive uncle still lives even in 2014. 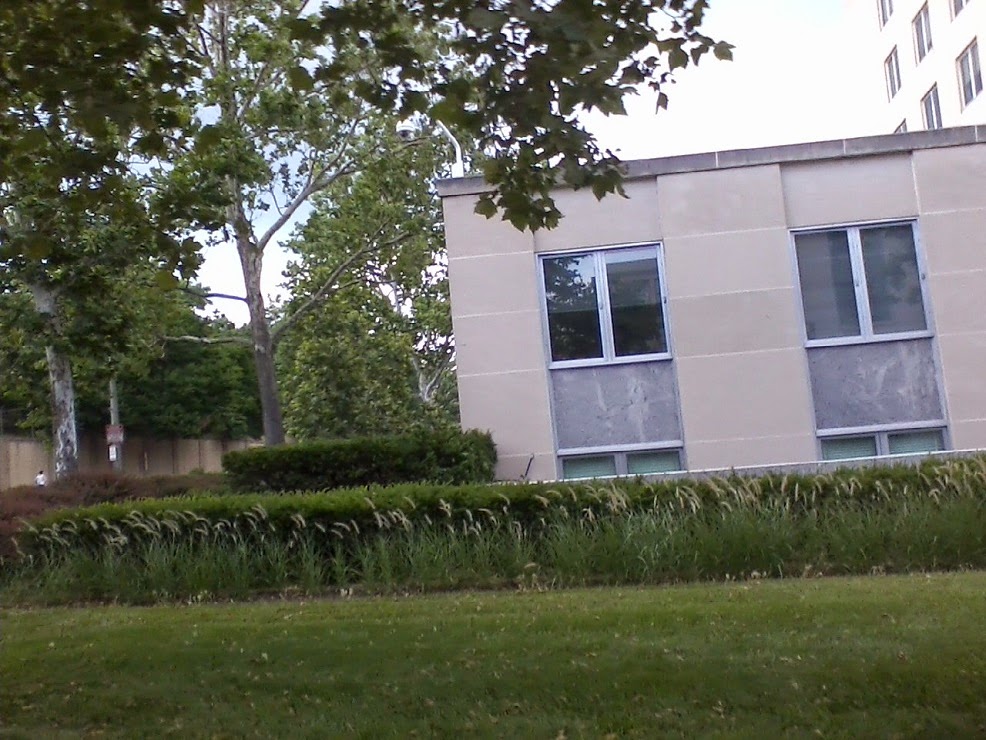 
OK, that's all for now. Work is still deeply and worryingly uncertain. I'll try to update the blog tomorrow night, though it might not be until late Wednesday.
--Regulus