"One for My Baby (and One More for the Road)" as performed by the truly great Billie Holiday ("Lady Day") on her album Songs for Distingué Lovers (1957)
I love me my Lady Day. And this video contains some awesome pictures of her.
Though she had a very rough and ultimately tragic life, her incredible singing voice can never die. The song itself was performed by numerous recording artists over the years including Frank Sinatra, Perry Como, Ella Fitzgerald, and Etta James to name just four. 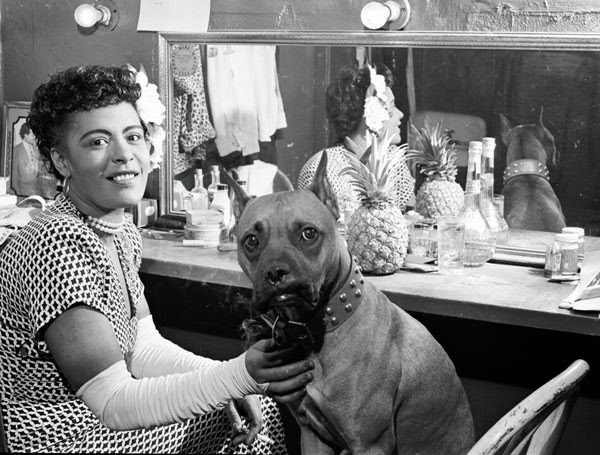 A picture of Billie Holiday at the Downbeat nightclub in New York City with her beloved boxer dog "Mister," circa June 1946. That's quite a collar on Mister, and I'm not quite sure what to make of him. He looks fierce but also intelligent.
*******

"It's All Good" by Boney James from his Sweet Thing album (1997)
This video contains some lovely wet city night images (and others). I can't tell if all the city images are in fact New York City. Whoever or whatever outfit ("Mr. Debonair / Lavender Hill Penthouse Suite") put the video together created a nice work of art.
*******


And now to repeat a song that I posted over 18 months ago as part of my predecessor Friday night musical interlude feature; this song is actually among my all-time favorites ...
"Space Age Love Song" by A Flock of Seagulls on the group's eponymous debut album (1982)
*******