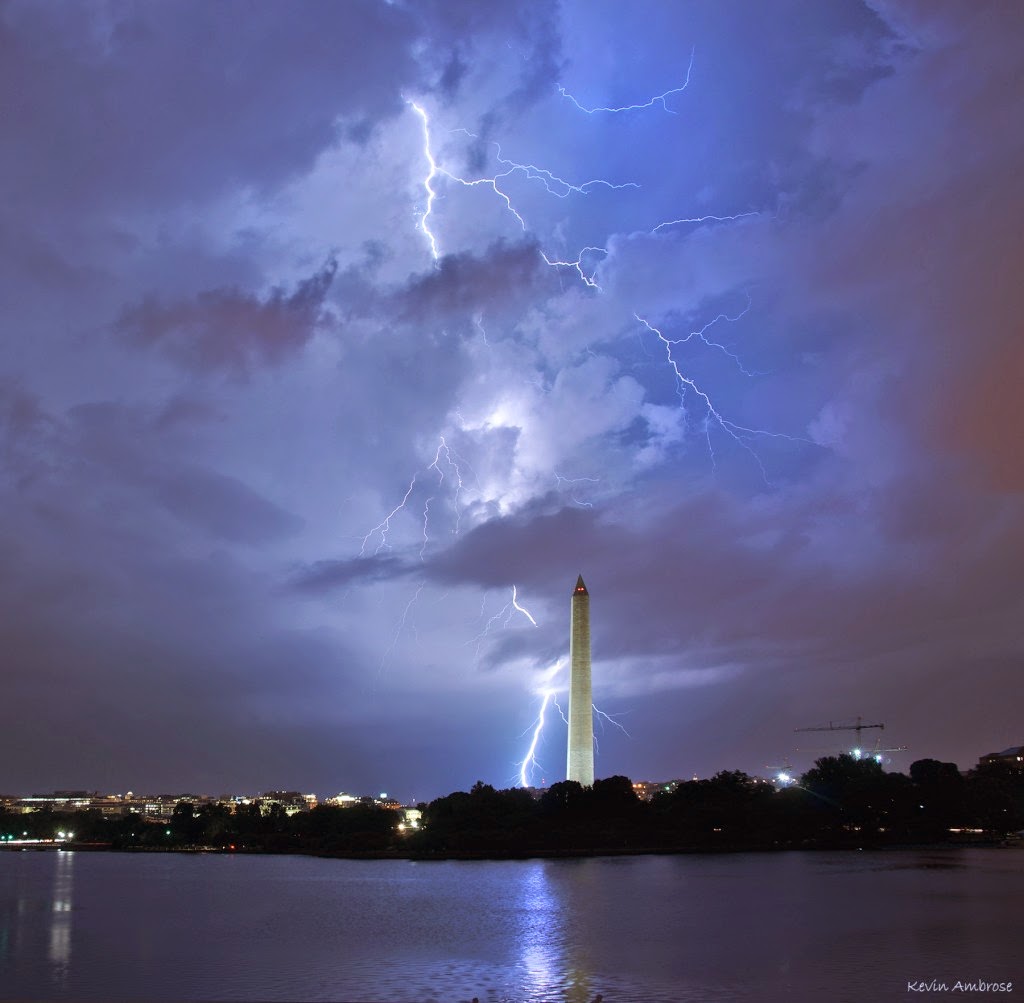 A cloud-to-ground lightning bolt splits the stormy night sky behind the Washington Monument as seen across the Tidal Basin from the Jefferson Memorial at 9:36PM June 25, 2014.
This picture by Kevin Ambrose comes from this Capital Weather Gang entry posted on June 26th and showing the thunderstorm with lightning display the previous night.
*******


Here is a rather fascinating article on the BBC News website (link embedded) :
Pablo Escobar's hippos: A growing problem 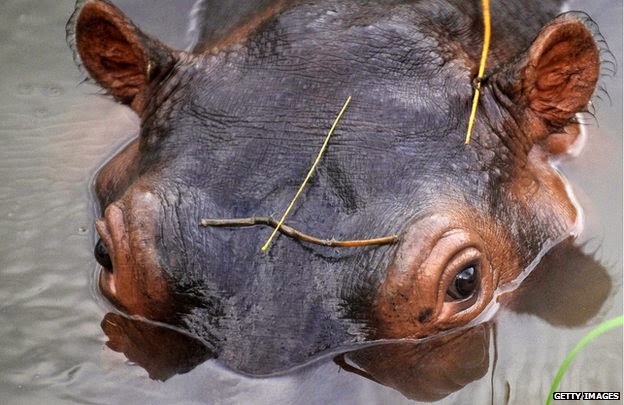 As the article headline suggests, it is about the growing problem posed by the steadily-multiplying hippos that were once part of the late, notorious, hyper-violent, billionaire drug kingpin Pablo Escobar's private zoo at his one-time sprawling compound Hacienda Napoles located in a remote, mountainous, and jungle-covered part of Colombia called Department of Antioquia.
The original four hippos have multiplied to an uncertain number -- estimates are between 50 and 60 but no one really knows, and the females continue to give birth to new calves each year -- and this is causing a growing problem both to human safety (the locals don't realize how dangerous hippos can be) and to the local (probably already stressed) ecology. 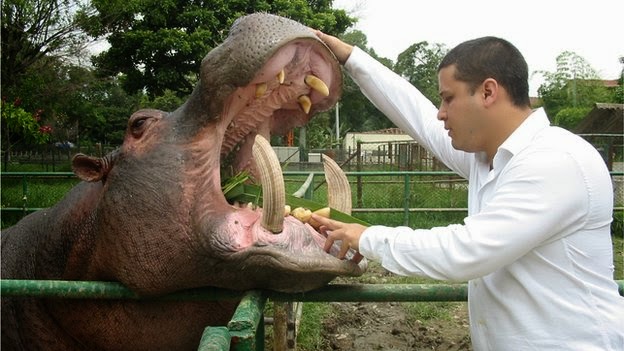 Carlos Valderrame checks a hippo's teeth. This picture is from the BBC News article in question. I'm unsure if this is one of the hippos in question in the article. The article doesn't specify.
*******


As noted, the four hippos were originally introduced by Escobar to Colombia at the private zoo he built (smuggling in all kinds of exotic , of course). When the zoo was confiscated, the animals there were sent to zoos around Colombia -- except for the hippos -- who, for their part thrived as the place became overgrown (and they quickly got outside the compound into the wild and the nearby Magdalena River). 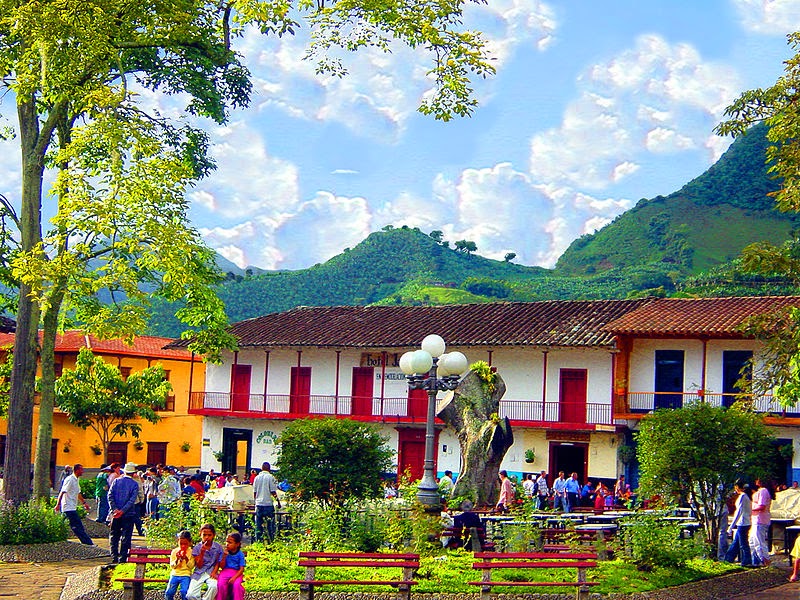 The Jardin Plaza in an unidentified town in the Antioquia Department of Colombia.
*******


As it is, the climate and ecosystem of that part of Colombia are quite ideal for hippos, probably not that different than their native African one. 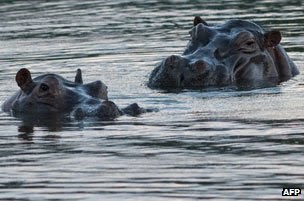 One male hippo in particular -- El Viejo, possibly pictured at left (the article didn't make it clear) -- has led the upriver migration.

Talk about an invasive species.


As for what to do with the hippos, in particular the adult ones, there really are no options. They can't really suitable for zoos (if any would take them) and they can't be returned to Africa for fear of diseases or parasites they may carry. On the other hand, it would be awful to kill them (and there appears to be no real local support for that extreme action at this time). Halting their reproduction, somehow, is the only way, I suppose. 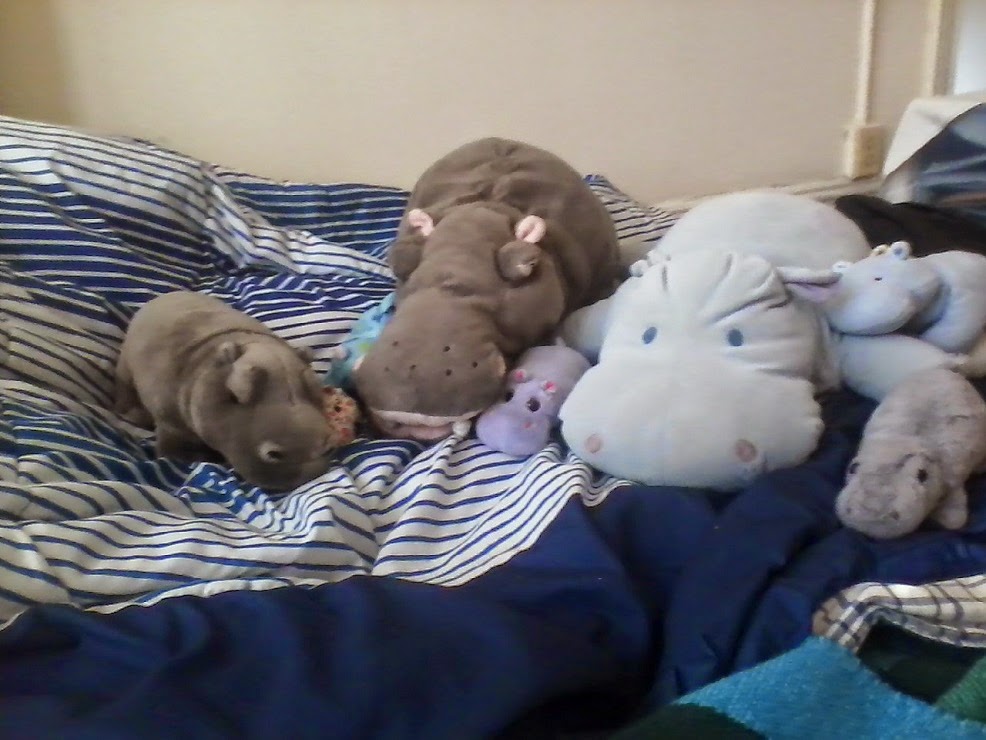 FULL DISCLOSURE: Now I have my own pod, or bloat, of hippos on my bed -- they are pictured above, having emerged from under the covers -- but those are plush ones with no invasive qualities at all.
******* 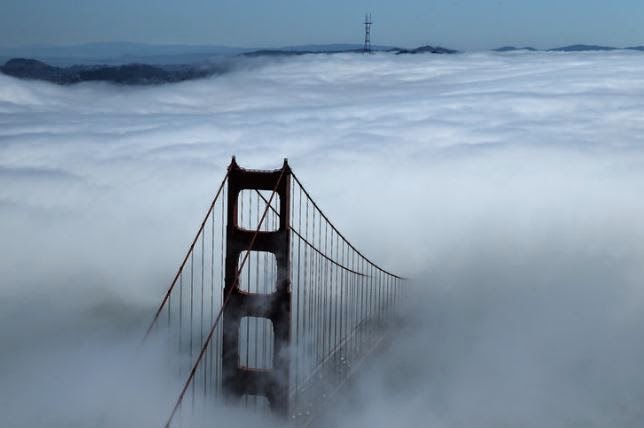 The North Tower of the Golden Gate Bridge rises above the ground fog rolling in from the Pacific with the incredibly retro-looking Sutro Tower visible in the distance.
*******


SAN FRANCISCO -- At moments, it glows like a pathway to heaven, floating almost dreamlike through the thick layer of fog that frequently blankets the city. Even on sunny days, the Golden Gate Bridge is a wonder, its graceful art deco towers gleaming a deep orange-red against the shimmering turquoise water of the San Francisco Bay.
But when John Moylan looked at the bridge, he also saw a darker side to its majestic beauty. In the 27 years since he was first appointed to the 19-member board that oversees the Golden Gate, Moylan had also come to see the tragedy of the bridge. It came in the form of countless stories he’d heard from grieving families whose loved ones had leapt to their deaths from the iconic span. 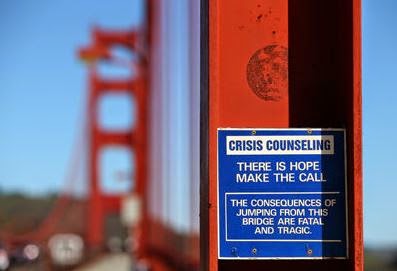 Moylan didn't blame the bridge. But he did understand the anguish. He had lost a grandnephew to suicide. And the memory of that pain alone had convinced him that if something could be done to save lives, it should be done. So as the numbers of the dead ticked higher and higher -- a record 46 suicides in 2013 -- Moylan pursued the often lonely fight of trying to convince his colleagues and the public of the need for a suicide barrier on the bridge. Friday's passing of a $76 million bill to build such a barrier marks a bittersweet victory for Moylan...
"Suicide is everyone's problem, and we have to do something about it," Moylan said at a board meeting last November. "My family has been touched by it, and I'll tell you what, it tears a family apart." 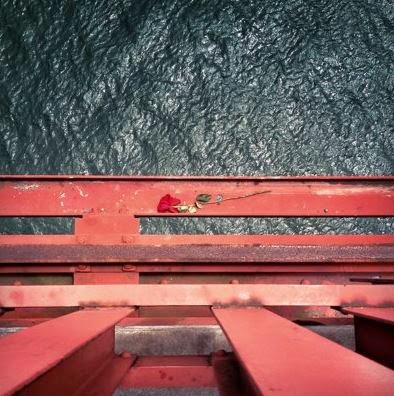 Moylan's words would turn out to be hauntingly prophetic. On June 5, less than two weeks after Moylan issued another public plea for a suicide barrier, a young man walked toward the center of the bridge on what was a sunny Thursday afternoon.


Around 4:20 p.m., according to witnesses, he crawled over the bridge's four-foot barrier and jumped to his death. His body was recovered by the Coast Guard and taken to the Marin County morgue. The man’s name would have gone unpublicized by the Bay Area media, which stopped daily coverage of the suicides long ago, had it not been for his recognizable last name.
He was Sean Moylan, the 27-year-old grandson of John Moylan, who had grown up literally in the shadow of his grandfather as he rose to become an increasingly influential guardian of the bridge...
For Dietrich Stroeh, a longtime bridge official who once was an outspoken opponent of a barrier, it was tragedy that changed his mind. One of his closest friends, who was terminally ill, jumped from the bridge and killed himself about five years ago. Stroeh was stunned by what his friend had done and the effect it had on the man’s family -- and on him. At the funeral, Stroeh recalled that they began to play "Danny Boy," an old Irish song about death, and he began to sob and had to leave the service. 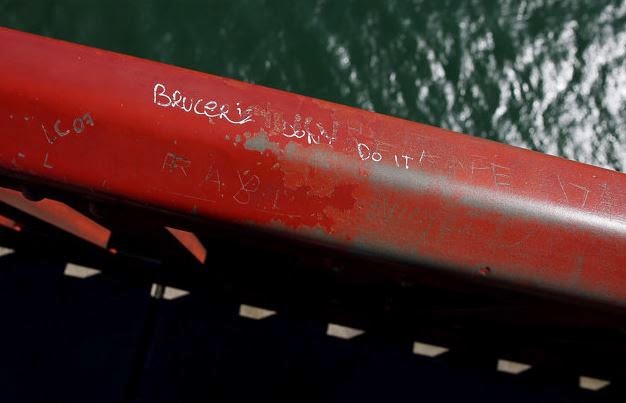 "I couldn’t handle it," Stroeh said. "I didn't know how emotional it was to lose someone like that in that way until that moment. ... I guess that's what really changed my mind."
All I have to say is that it's about frickin' time: 1,600 or so deaths and counting is enough.
Oh, and to anybody reading this who is even considering it: Don't do it. Too much yet to see and too many people to get even with. Seriously, though, just don't it.
******* 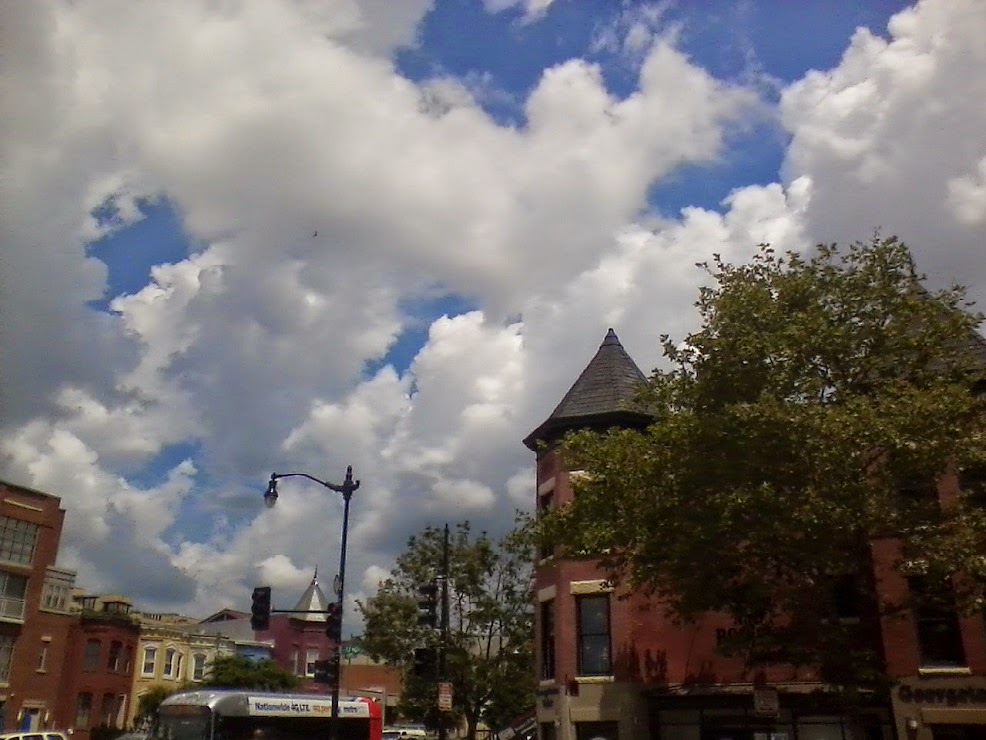 The bright summer sky filled with fair weather puffy cumulus clouds as seen from the corner of 13th and U Streets NW, Washington, D.C., 12:00PM June 27, 2014.
I went into work at 12:30PM today after staying out too long last night -- first at The Laughing Man Tavern and then at the Old Bar at Old Ebbitt Grill with a co-worker.
*******


Home on this Friday night but I'm going out soon to No. 9 to meet Gary. Earlier, he and I took Wendy grocery shopping at Trader Joe's on 14th Street (my maiden voyage there). Of note, Wendy's sprained ankle is slowly healing and she can walk slowly. Thereafter, I stopped at her place for a bit before walked home in the breezy, balmy, clear night of Washington, D.C., this summer.
OK, that's all for now. Oh, yes, I got an extension of two work weeks plus a couple days on my compliance work (all in Texas). As for tomorrow, it's just a gym day and then dinner tomorrow night with Wendy. On Sunday, I intend to take a walk.
I'll try to update this blog tomorrow evening with the usual jukebox Saturday night entry.
--Regulus
Posted by Regulus at 10:54 PM