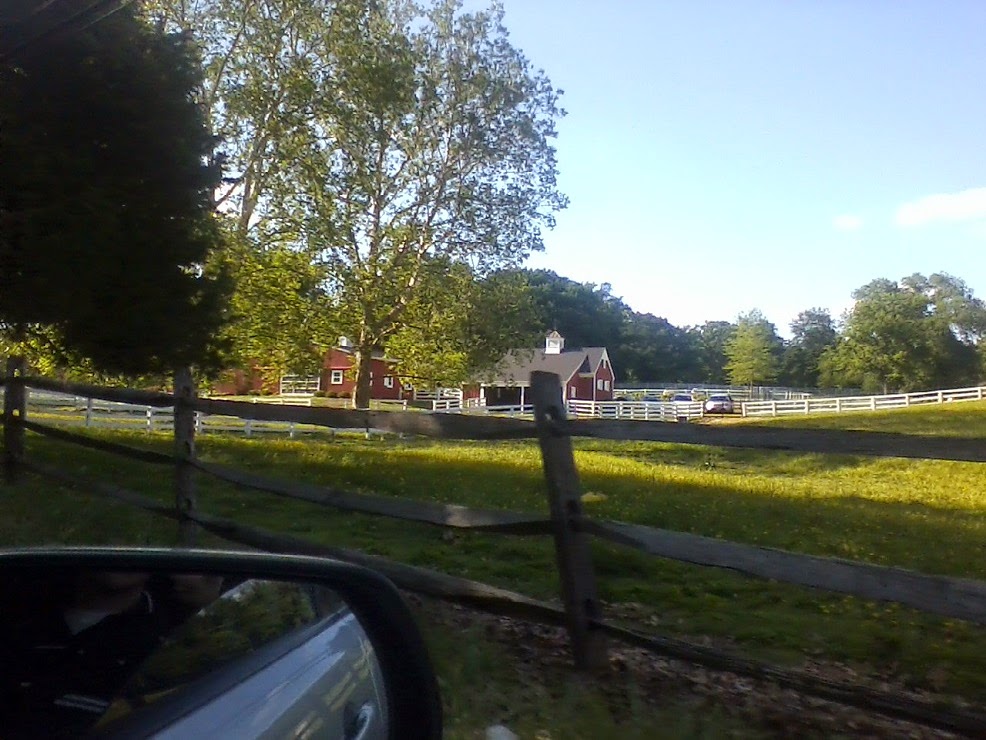 A horse park / farm in the very upscale, rolling bucolic countryside of Potomac / Travilah, Md., 5:22PM June 1, 2014.
The pictures in this entry are the ones I took on my two consecutive Sunday (May 25th and June 1st) Metrorail treks out of D.C. and up to Grosvenor Park in Montgomery County, suburban Maryland, to see my friend LP, who lives in one of the three behemoth "GP" buildings, specifically, GPII. It is very peaceful there -- indeed, I could easily live there, especially given how immediately accessible it is to the Grosvenor-Strathmore Metro Red Line station.
******


Friday evening following a rather stressful week owing to job uncertainty. However, by the end of today, I detected some glimmers of hope in terms of additional billable work that will keep me fully employed. I'll know more next week. 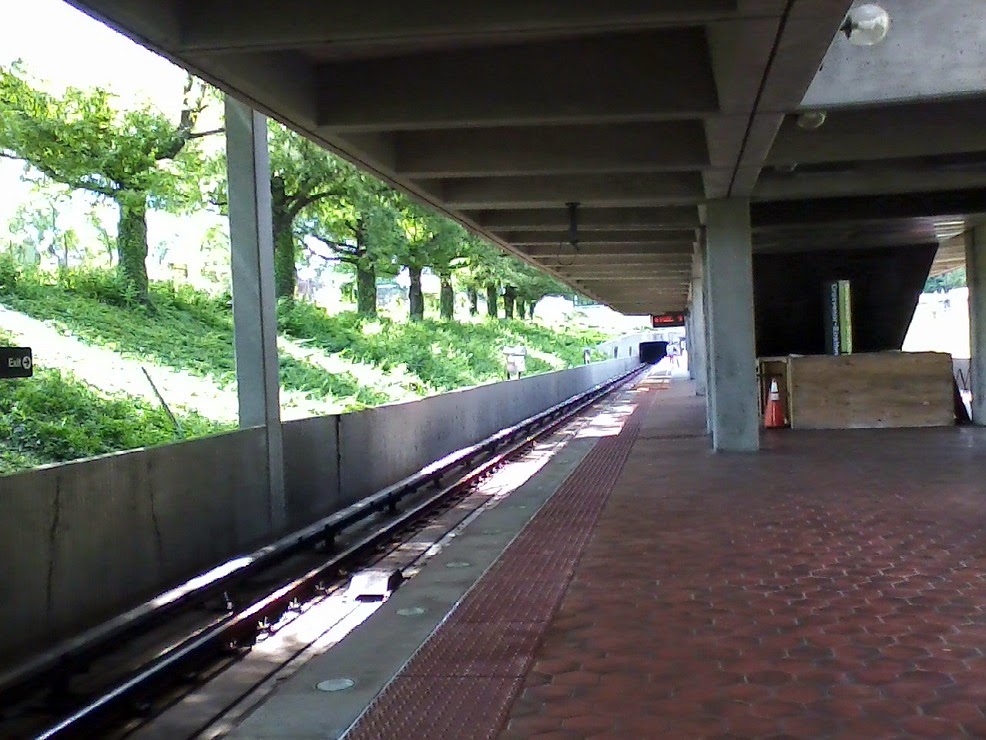 
*First, and to clarify, Grosvenor Park has a postal address of Rockville, Md., although it is not in the city limits of Rockville and is more properly unincorporated "North Bethesda" (though LP tells me the Post Office won't deliver mail if it says "North Bethesda" on the envelope or package).
**Secondly, it would be so nice if WMATA could instruct its Metrorail operators to say the name correctly: THE "S" IS SILENT. It's NOT "Grovez-NOR," but rather "Grov-nor."
*******


I'm cooking dinner and waiting to see if my screwed up TV with the initial scrambled image will come in. It has been taking on average 6 to 7 minutes after turning it on to come in. However, last night it started to scramble again even after the image had cleared up. 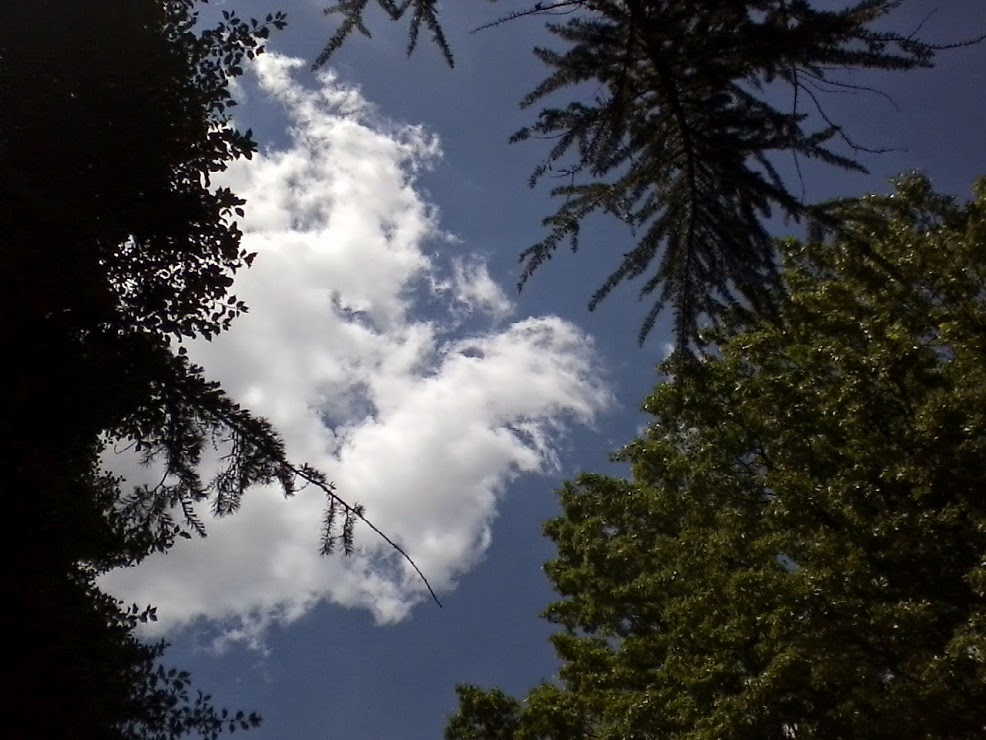 Fair blue sky and a flattened fair weather cumulus cloud as seen from the grounds of Grosvenor Park, Rockville, Md., 3:14PM
This is not the same pictures as the one I posted in this entry. That one was taken almost exactly one week earlier.
******* 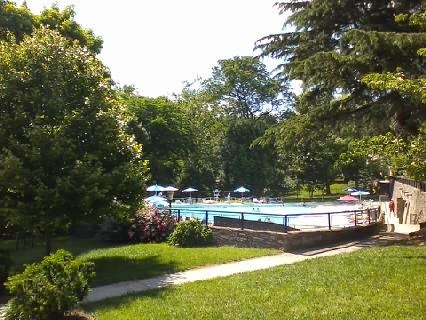 
Right now I'm up to 8 minutes. I'm guessing the TV quality is deteriorating and I am going to have to buy a new television -- it just came in and I can see John Boy, or rather, his old man on The Waltons (now on Hallmark).
This reminds me of the Sanford & Son episode when Fred goes on a fictitious show called Wheel and Deal -- a parody of Let's Make a Deal -- and wins a color television set (after losing out a new sports car), prompting him to say while standing amid the audience, "Now I can see life as it really is! Now I can see what color the Walton's are!" 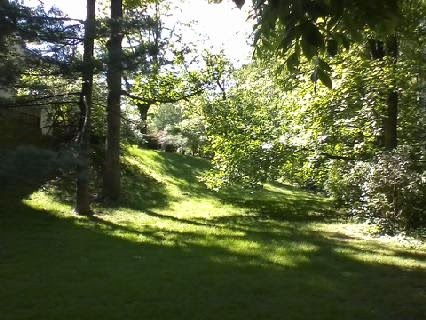 
The audience -- which was probably the real studio audience there to watch that episode of Sanford & Son -- bursts out laughing. Here is the YouTube video. (I realize this link could vanish at any moment; it starts at 14:45 and he makes his statement starting at 15:10.) Actually, the whole episode has lots of funny lines. 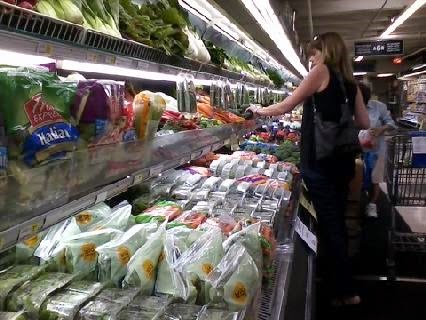 The produce aisles of the Grosvenor Market, Grosvenor Park, Montgomery County (Rockville), Md., 4:06PM June 1, 2014.
This terrific little market is in the GPI building. On both Sunday visits, I bought some stuff -- all in miniature -- including sushi, a spinach quiche, Vintage Seltzer water (in a can!), a few small bottles of wine, and a couple of pieces of chocolate-coated cherries, and had a little outdoor picnic, of a sort, with LP.
*******


This evening, I went to Macy's at Metro Center this evening and bought two new pairs of pants, a button-down dress shirt, and an 8-pack of calf-high white socks (those have been getting harder to get over the past several years as sock lengths have dropped to what my Polish maternal grandmother back in South Amboy, N.J., in the late 1970s used to call "footies" -- i.e., barely ankle high, if that. 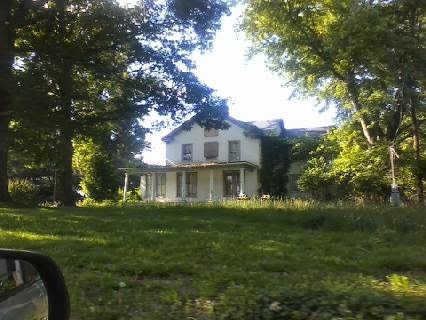 An old abandoned farmhouse at the corner of Travilah and Glen Roads in Potomac (or, rather, Travilah), Md., 5:26PM June 1, 2014.
We were driving to see the approx. 250 year old Travilah Oak, a picture of which I posted in this entry. I have a few additional pictures of that awesome tree, but they are not posted in this entry.
*******


Last night, I had a good gym workout although I only had a very brief (barely 10 minute) swim in the pool. But I did a full 6.25-mile jog over 60 minutes plus 5 minute cool down and about an hour of light-to-moderate machine-based weightlifting. 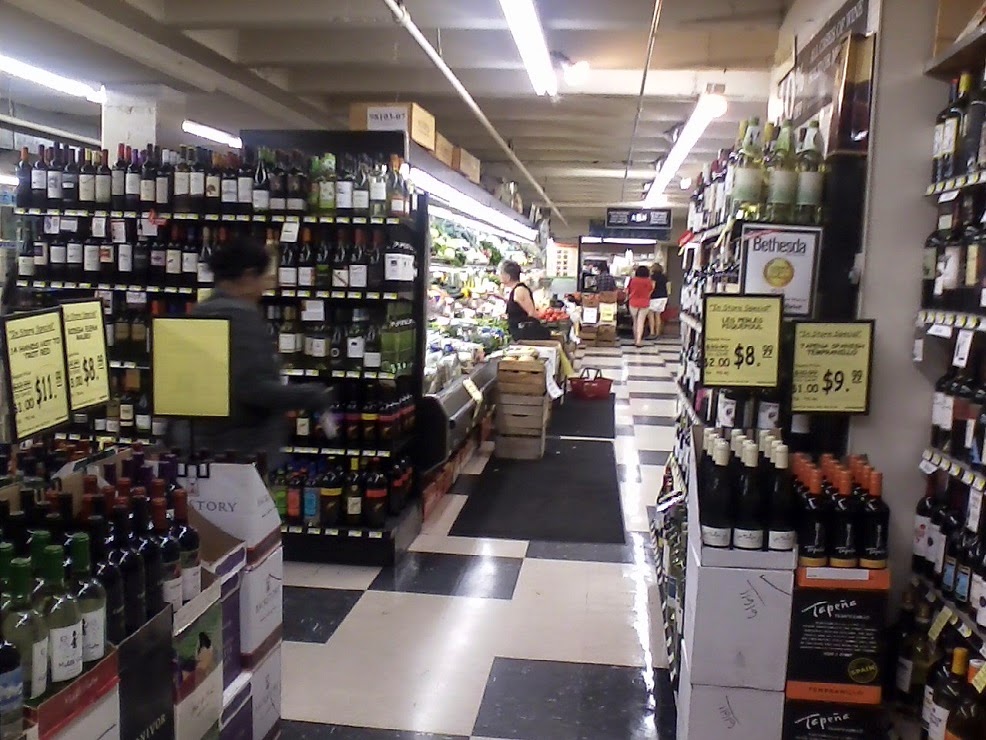 
As for my dinner tonight, it's a mixed bag of sautéed beef cubes, mushrooms, and onions; reheated steamed broccoli and carrots (from last night -- they were balled in a piece of tin foil and I just threw them into the frying pan); and steamed jasmine rice. It came out fairly well except I can only eat about half of it. Furthermore, the beef cubes (they're supposed be for stew meat) take a while to cut up or even to chew because they are slightly too large. 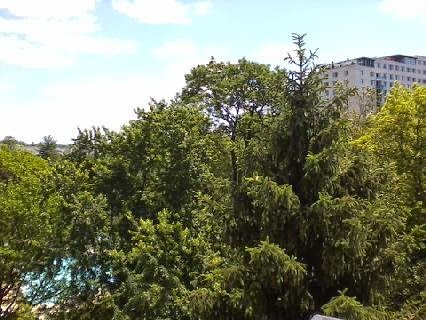 A view from LP's balcony in the GPII building, Grosvenor Park, Rockville, Md., 1:54PM May 25, 2014. His condo is on the fourth floor but owing to the terrain, it is actually much higher (more like the 9th floor) above the grassy glen below cloaked in trees.
*******


I'm also having my usual Vintage Seltzer water. It's just Selzter tonight; sometimes I mix it with a bit of Gatorade or even some of that Sparkling Ice brand sucralose-flavored drink. (There apparently IS a difference between Seltzer water and club soda involving sodium content. I prefer the former. Oh, and I'm having one of those small bottles of Cavit Pinot Grigio that I got at the Grosvenor Market last Sunday (see above pictures) while visiting Larry at his Grosvenor Park condo. 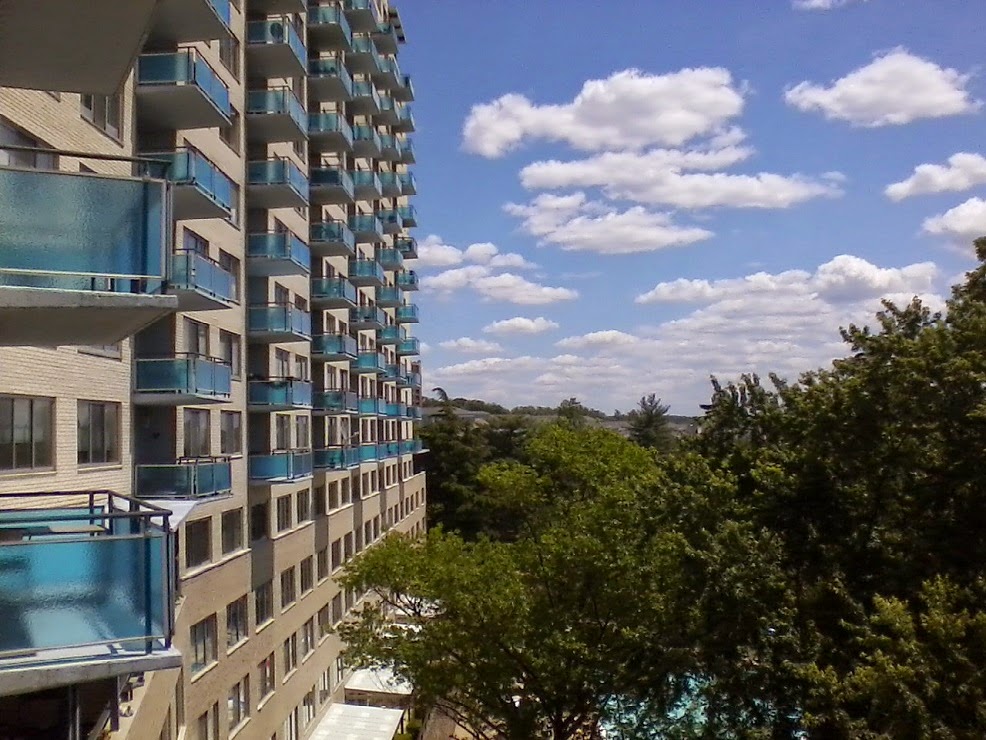 Another balcony view from LP's GPII condo, Grosvenor Park, Md., 1:54PM May 25, 2014. This is the view looking south/southeast. If my cellphone camera were better, you could resolve the top quarter or so of the ginormous Hughes Memorial Tower in D.C. that is located about 8 miles or so from here.
*******


As for tonight, I think I'll just to go No. 9. Gary is away (annual bowling tournament in Pennsylvania) and Kristof never is available (although he is actually in Sri Lanka for three weeks right now.)  I am in an anti-"LaLo" mode of late. I get treated so shabbily and shitty by the bartenders (even if the owner seems to like me). As it is, the place is more a speakeasy than your friendly corner pub. Oooh, the things that go on there sometimes ...
As for Nellie's, it will just be too mobbed with young straight people.

Oh, and it's frickin' Capital Pride week -- "Centuries of June," indeed -- so that's all the more reason to avoid, well, pretty much the whole damn 17th Street gay ghetto.


Beads, lube, and condoms here with the fairy dust of favorable gay marriage rulings in the most unlikely of Red States there. And vapid, meaningless corporate sponsors (various vodka, PNC Bank, Wells Fargo ...) galore.
But let's not get into that right now. 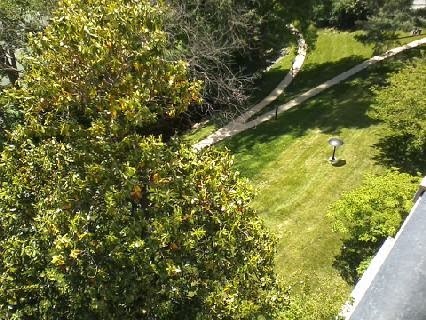 
The weather this weekend "promises" to be perfect, wonderful scrumptious, delightful, suburb, get-out-and-enjoy, God-Bless-America, "Columbia, the Gem of the Ocean" this weekend. In other words, very sunny and too damn bright and dry for my liking. However, the good news is there is an extended chance of showers and t-storms next week. 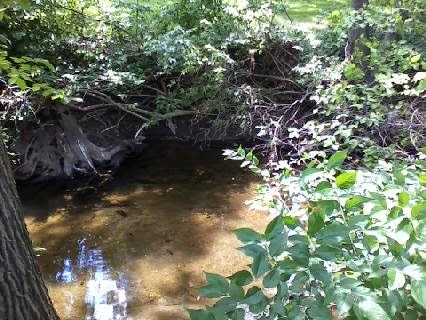 Lux Manor -- the unofficial name of the stream that flows through the grounds of Grosvenor Park, Montgomery County (Rockville), Md. 2:29PM May 25, 2014.
LP tells me that the stream "officially" has no name.


Here's a satisfying, indeed, rather fun New York Times piece by Tim Egan (link embedded): Tea Party Dead-Enders.
Here is Paul Krugman's Friday New York Times op-ed: The Climate Domino. His blog-keeping has been thin of late but he indicated that should change.
Finally, read Jonathan Chait's piece (link embedded) about the Obama administration's new carbon pollution regulations and whether it's enough: Has Obama Saved the Earth, or Doomed It? 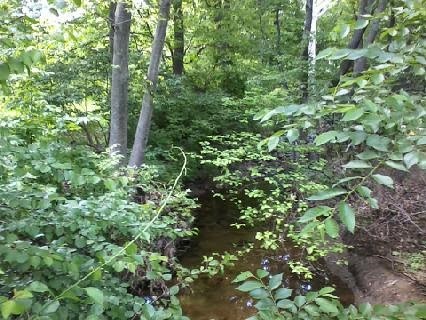 
As a final thought, I've been watching Gilligan's Island on TV Land while writing this, and out of curiosity, I Google-to-Wikipedia'd actress Tina Louise (she who played Ginger). She is still alive at 80. She has a 43-year old daughter, actress Caprice Crane. Her father is the late TV announcer / interviewer Les Crane -- Tina Louise's late ex-husband. 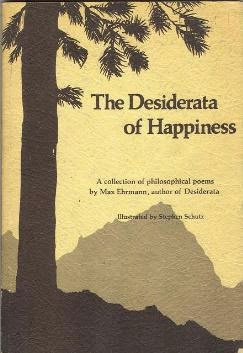 Les Crane made an album called Desiderata in 1971 album by Les Crane that includes his reciting of the 1927 poem by Max Ehrmann entitled Desiderata, which apparently has sometimes been erroneously written in the late 17th Century.

Leonard Nimoy also quoted it in his 1968 album "Two Sides of Leonard Nimoy" under "Spock's Thoughts."


Regardless of who has subsequently read it following Ehrmann's authorship, it is a lovely poem that captures some important sentiments and profound insights. 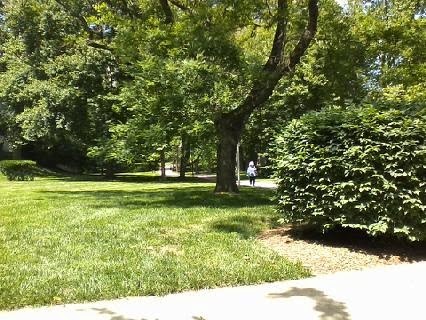 
OK, that's all for now. (Of note, while composing this entry with the TV on, I can safely say that it has pretty much crapped out at this point.) I'll try to post a Jukebox Saturday Night entry tomorrow evening.
--Regulus
Posted by Regulus at 10:42 PM