Another Unwieldy Entry Bites the Dust and Is Replaced by a Short, Disjointed Post 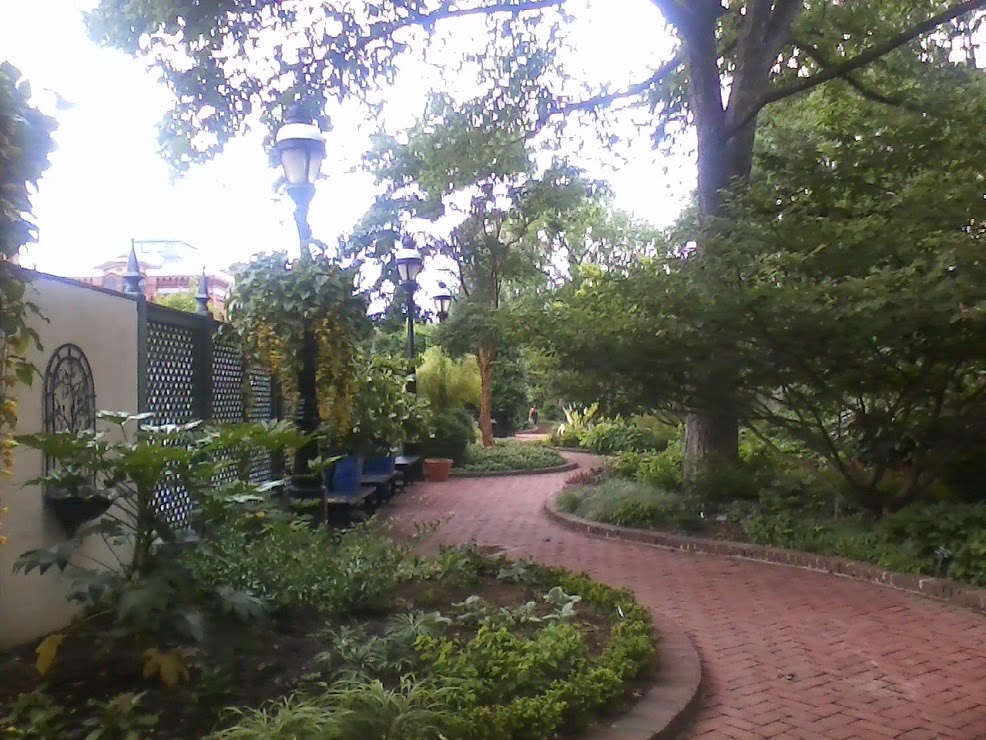 A garden pathway between Independence Avenue and Jefferson Drive SW (on the east side of the permanently-under-reconstruction Arts and Industry Building, Washington, D.C., 6:46PM June 10, 2014.
*******


I'm sorry -- I tried to post an entry but it got too long and was a bit too vituperative. I'm concerned about work and the possibility of being laid off due to lack of billable work at this time. (Such is life as a Federal contractor.) There is an important meeting tomorrow (which doesn't involve me though it profoundly impacts me) that will clarify things. If things don't work out in the next week or two, I'm in immediate deep doo-doo and will be laid off for some indefinite period of time, which would be financially untenable for me. 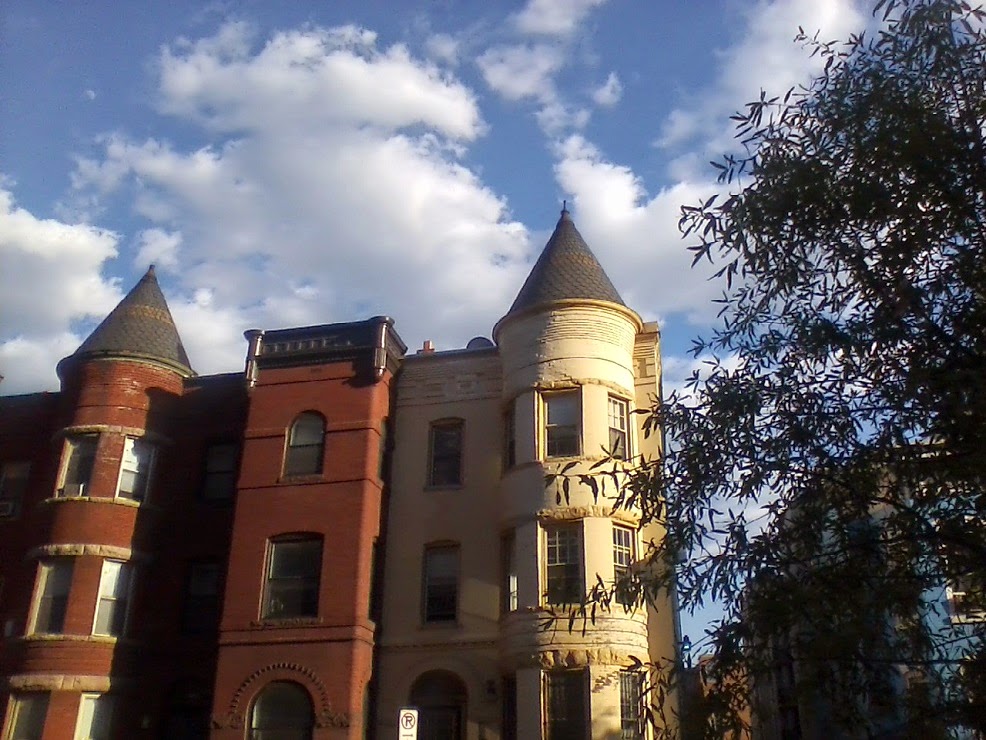 The row houses in the 1300 block of W Street NW, Washington, D.C., 6:43PM June 7, 2014. This is located directly across the street from the Anthony Bowen YMCA where I typically go (usually three times per seven day week; this picture was taken at the end of my last Saturday workout). I also work with someone who lives in the end house.
*******


I also discussed in that draft entry a few events with a political spin -- Eric Cantor's shocking Republican primary loss and seeing frickin' Benjamin "Benji" Wittes on the unwatchable PBS Newshour while on the treadmill. This prompted me to change the channel as quickly as possible, or rather, go do my usual New Zealand course runs. I then talked a bit more about my shortened gym visit tonight versus my great one on Monday night. (I weighed myself tonight and was still maintaining at 142.5 pounds.) Finally, I also mentioned the weather and deluge of rain we had earlier tonight here in D.C. It looks like 0.75" fell at KDCA and 0.76" at KIAD while KBWI only had just 0.08". 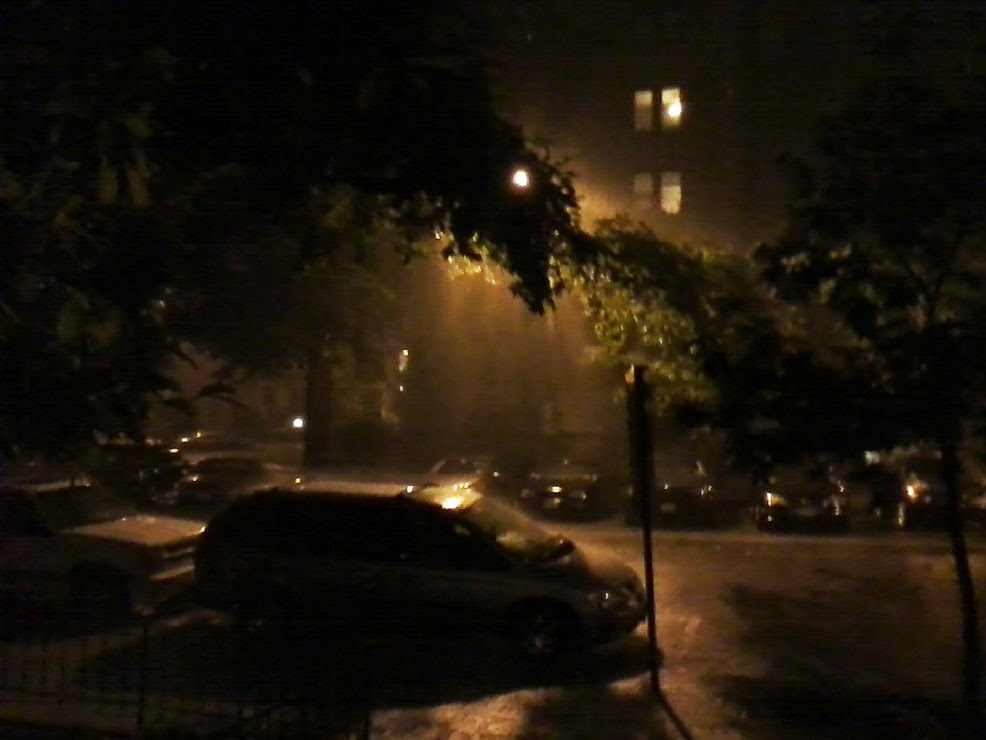 A blurry cellphone picture at the entrance to my Hampton Courts apartment building in the 2000 block of New Hampshire Avenue NW, Washington, D.C., 9:44PM June 11, 2014.
As mentioned, I left the gym early tonight after my hour on the treadmill by cutting short the weightlifting and skipping the pool outright. But I ended up walking home in a deluge, which prompted me to do my piled up laundry since my clothes were so wet.
*******


But I'm so tired now that I have to go to bed. The entry I had intended to post is now in two-part draft form. Odds are that I will never post them. I just can't post these long entries, although the main topic (my possible layoff) will certainly be discussed in future entries if it in fact happens. 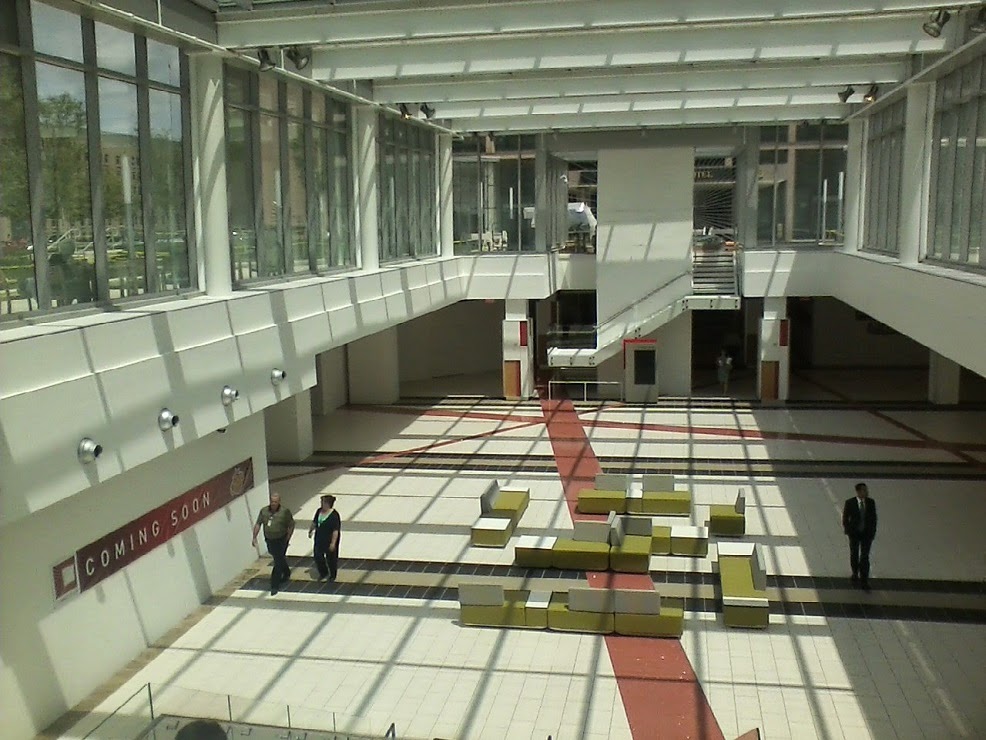 The neeeeeeeeeewwww atrium of the L'Enfant Plaza shopping center at the top of the entrance way from the plaza itself, Washington, D.C., 2:14PM June 11, 2014.
This is where the old glass pyramid used to be. This picture doesn't even look quite real. It's amazing that no matter what redesign is tried, fundamentally and intrinsically L'Enfant Plaza always resembles "yesterday's tomorrow." Actually, it sort of resembles something out of a Hopper painting.
*******


Of course, if I am laid off I guess I'll have plenty of time (at least for a while until I'm evicted) of posting flippin' blog entries. Anyway, I'll have a better sense of things tomorrow (well, later today). Also, I do have at least three people in supervisory roles at work who are trying to help me. It's just a very tricky time for the company overall.
OK, that's all for now. I might update this entry tomorrow -- or rather, later today -- if I find out anything at work, otherwise it will be on Friday.
--Regulus
Posted by Regulus at 1:14 AM