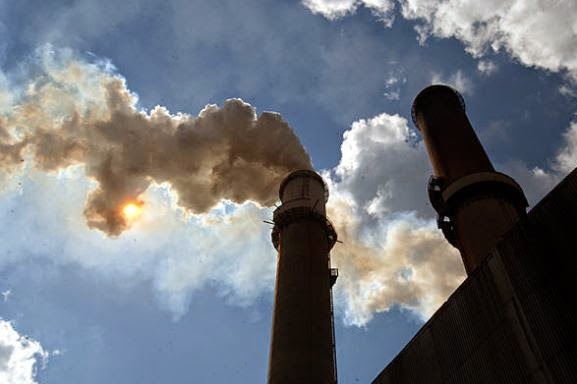 The smoke stacks from the giant coal-fired Gibson Generating Station located near Princeton, Indiana in a 2004 picture.
*******


I was also going to repost in full two Jonathan Chait pieces from the Daily Intelligencer blog related to the historic Obama administration announcement of the proposed carbon pollution rules for existing power plants that issued on Monday by the U.S. Environmental Protection Agency. However, instead I'll just post my own overview. 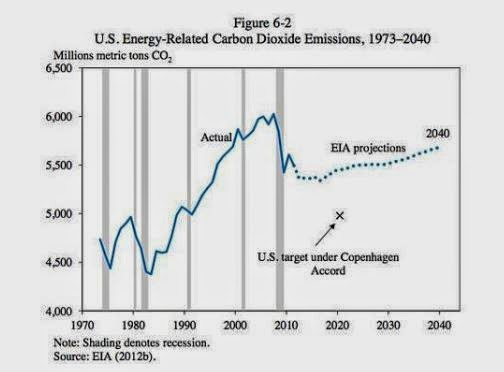 Figure 6-2 from the 2013 Economic Report of the President showing U.S. energy-related carbon dioxide emissions from 1973 through the present and projected (dashed line) through 2040. Shaded areas indicate recessions.
The dashed line is based on EIA projections. The "x" shows the original / moribund Copenhagen target of a 17 percent reduction by 2020 over 2005 emissions. Amounts on the y-axis are in millions of metric tons CO2 (or more likely, CO2-equivalent, which is typically abbreviated MMTCO2-Eq.). 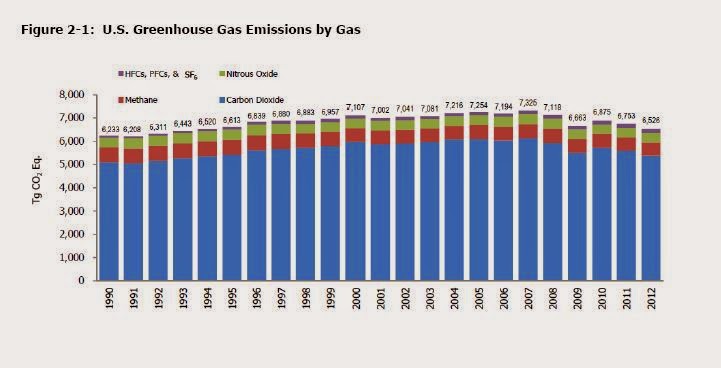 Figure 2-1: U.S. greenhouse gas (GHG) emissions by gas 1990 - 2012 in MMTCO2-Eq. This is taken from the April 2014 report Inventory of U.S. Greenhouse Gas Emissions and Sinks: 1990-2012 (see Chapter 2 - Trends in GHG Emissions). Click for larger image.
Note how much U.S. emissions have actually dropped (mostly because of the bad economy but also because of increased use of renewable energy technologies, improved energy efficiency, and more usage of less carbon intensive fossil fuels such as natural gas over coal for electricity generation). 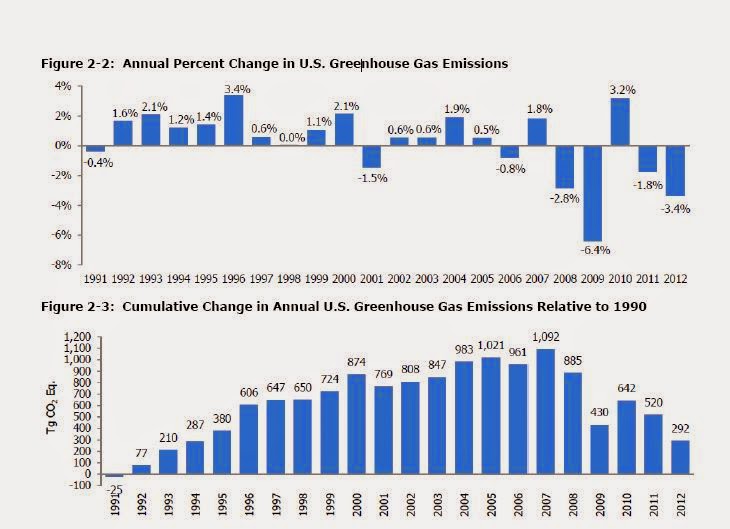 Figures 2-2 and 2-3: Annual percentage change in U.S. GHG emissions and cumulative change relative to 1990 for the period 1991 - 2012. Same source (see Chapter 2 - Trends in GHG Emissions). Figure 2-3 is in Teragrams (Tg) of CO2-Eq., which is the same as MMTCO2-Eq. Click for larger image.
The EPA proposed rule would achieve a 30 percent reduction over 2005 emissions by 2030 -- and thus de facto achieve the Copenhagen target, resurrecting it from the dead. It applies to 600+ fossil fuel burning power generating stations in the United States. The macroeconomic costs of this effort are small -- but even if not, it would still be a critical task. A secondary goal would be to kick-start international climate diplomacy by showing the world that the U.S. is serious about emissions reductions.
*******


It's a big flippin' deal and -- as Chait has argued -- on par with Obama's Affordable Care Act in terms of the potential long-term positive consequences (GOP fevered lunacy notwithstanding). (And I wholeheartedly agree with Paul Krugman's sentiments in this blog entry.)
So in short, let me just link to the two pieces without extensive comment (links embedded):
Obama Makes His Bid to Become the Environmental President
and


Here Are the Newspapers That Think You're an Idiot

Two quick points: First, it's not guaranteed that the proposed EPA rule will survive legal challenges that takes it all the way to the Supreme Court (it was a 2007 Supreme Court ruling Massachusetts v. Environmental Protection Agency that brought us to where we are today). 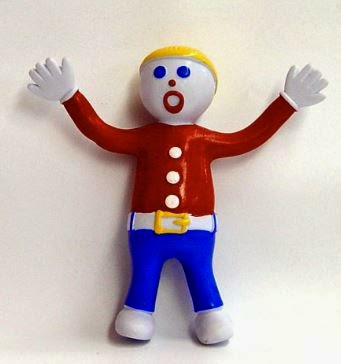 The second piece covers the zero-sum, bullsh!t way major news periodicals are covering the story including The WaHoPo and its distilled nihilistic offspring, POLITICO, as well as The New York Times and even the news aggregating and commentary site Huffington Post. 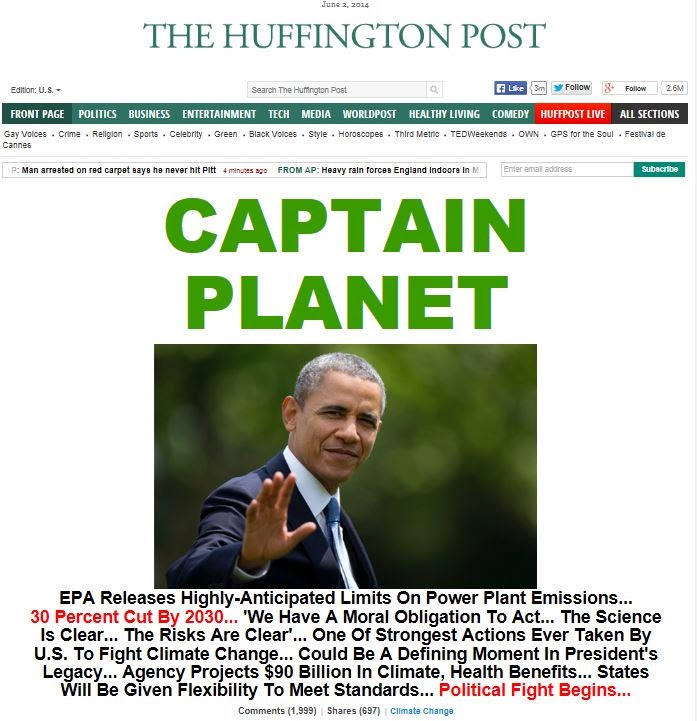 The Huffington Post one that Chait cited with screen capture image -- and which I actually screen captured on my own independently of him -- featured the most links to actual substantial policy topics. Above is the headline on Monday at 219PM.
*******


Two other links: EPA's Carbon Pollution Standards webpage and the 645-page proposed rule called the Emission Guidelines for Existing Stationary Sources: Electric Utility Generating Units.
I'm quite intrigued by the fact that the proposed rule basically lets states set up cap-and-trade systems (like the RGGI system, even if that one is languishing in its splendid isolation). 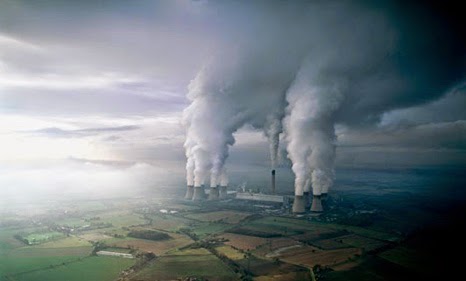 Massive clouds of steam and smoke rising from the multiple cooling towers of a sprawling power generating station. The steam and smoke is clearly altering the local climate by cloud cover alone.
This is actually an image of the ginormous Drax Power Station in North Yorkshire, England, United Kingdom. This nearly 4,000-MW Godzilla of a power station provides nearly 7 percent of the UK's base load of electricity -- not to mention the largest single stationary source of CO2 emissions in the UK. 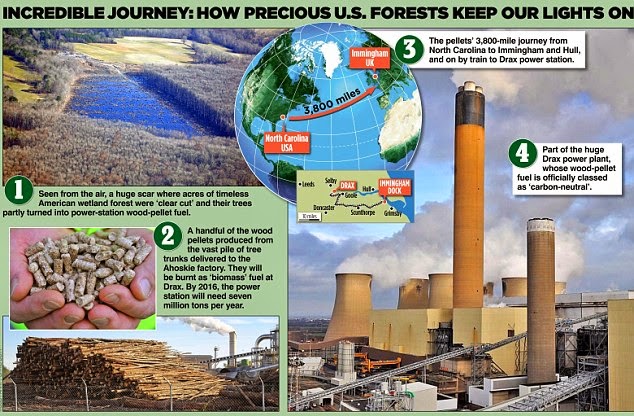 The facility is slowly shifting from coal to biomass, though the appetite of this monster for the wood pellets it will use instead of coal is so huge that this is deeply environmentally problematic. (Oh, and the wood pellets will come from monocultural forest plantations including those in North Carolina.)
******* 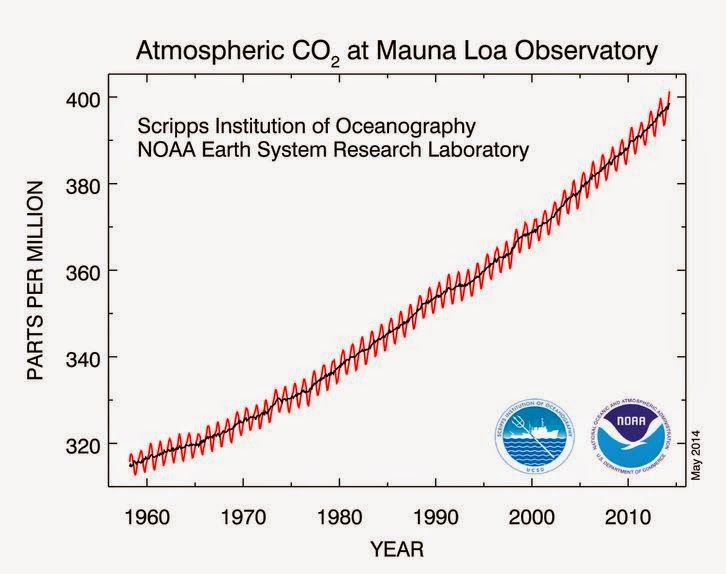 Monthly and seasonally corrected atmospheric CO2 concentrations as measured at the Mauna Loa Observatory, 1958 - early 2014. We've clicked over the 400 parts per million by volume (ppmv) just this year.
******* 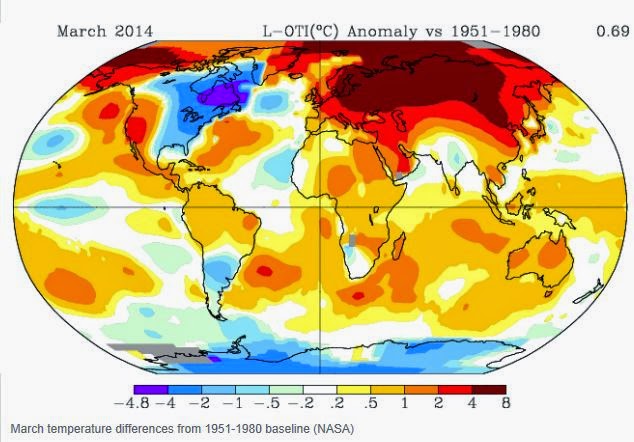 Sorry for the above detours-- but it does show how complicated and yet long-term dire is the issue. Anyway, I would like to end on note that is both cautionary and hopeful by quoting Chait from the first blog entry linked above: 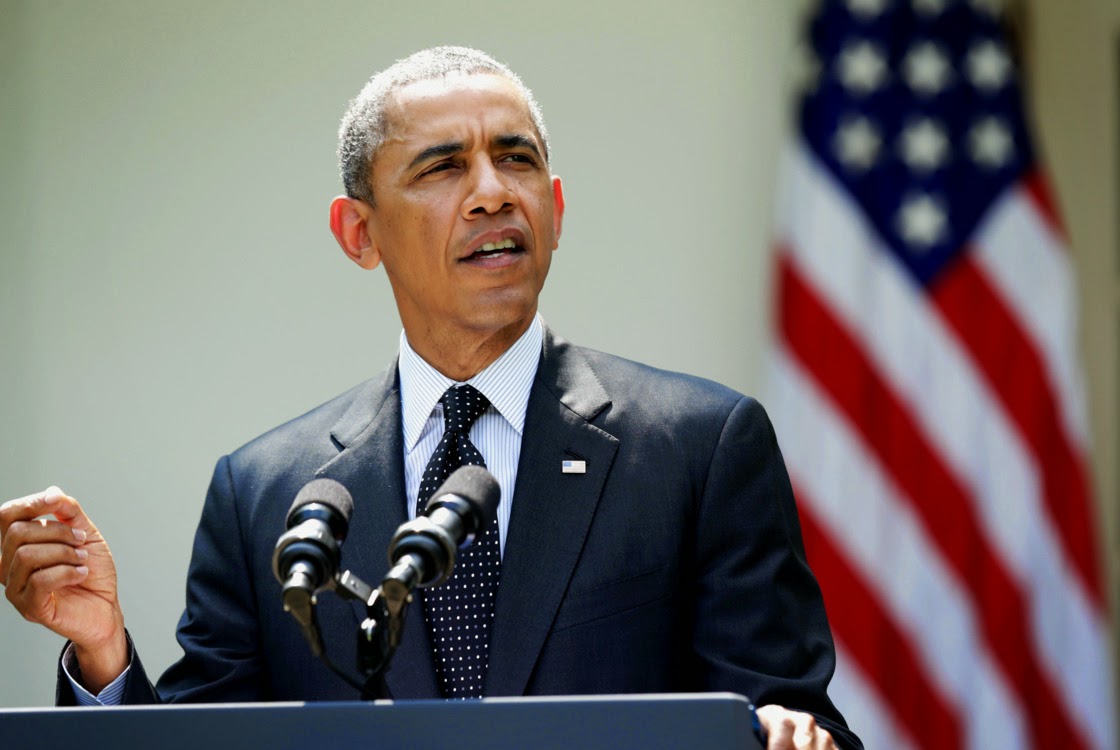 "Obama's climate agenda may well ultimately fail. If it does, it will be because it was thwarted by actors he cannot control: All five Republican-appointed Supreme Court justices may nullify his proposal, or a future Republican president may dismantle it, or the governments of China and other states may decide not to enter an international treaty. A president cannot save the planet. But it can no longer be fairly denied that Obama has thrown himself entirely behind the cause." 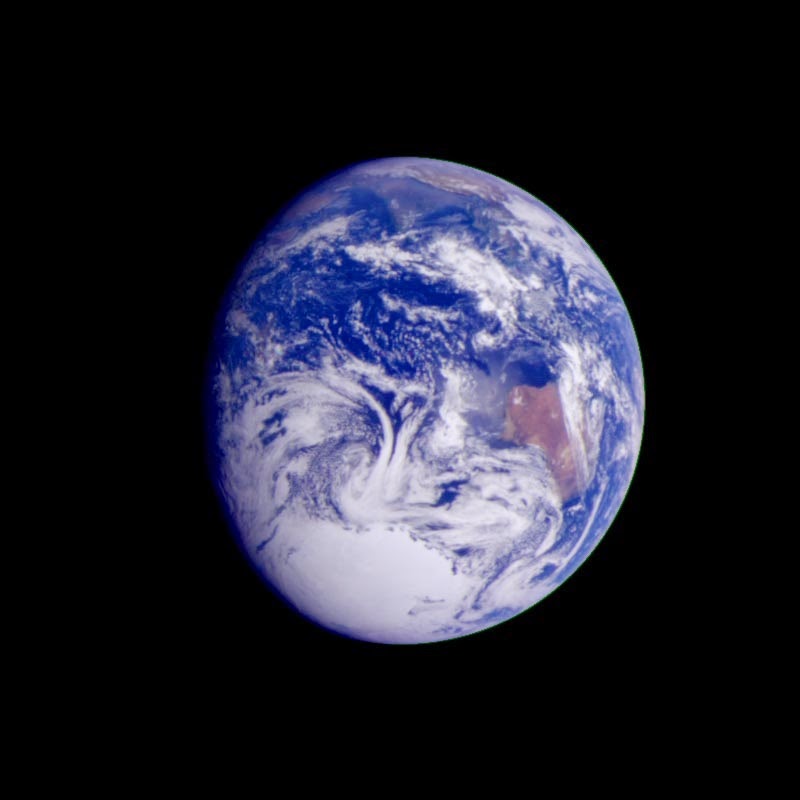 That said, I concur with Chait that whatever the future brings, this was a good day for creating the necessary global political momentum to really and truly start limiting the unchecked emissions of greenhouse gases and thus limit the amount of potentially civilization-altering climate change in the 21st and 22nd Centuries, the rest of the 3rd Millennium, and beyond.
--Regulus
Posted by Regulus at 2:14 AM