The Awful, Unbikeable Soulless Purgatory of Temple Hills / Suitland, Prince George's Co., Md -- But Then Safely Back in the D.C. Bubble 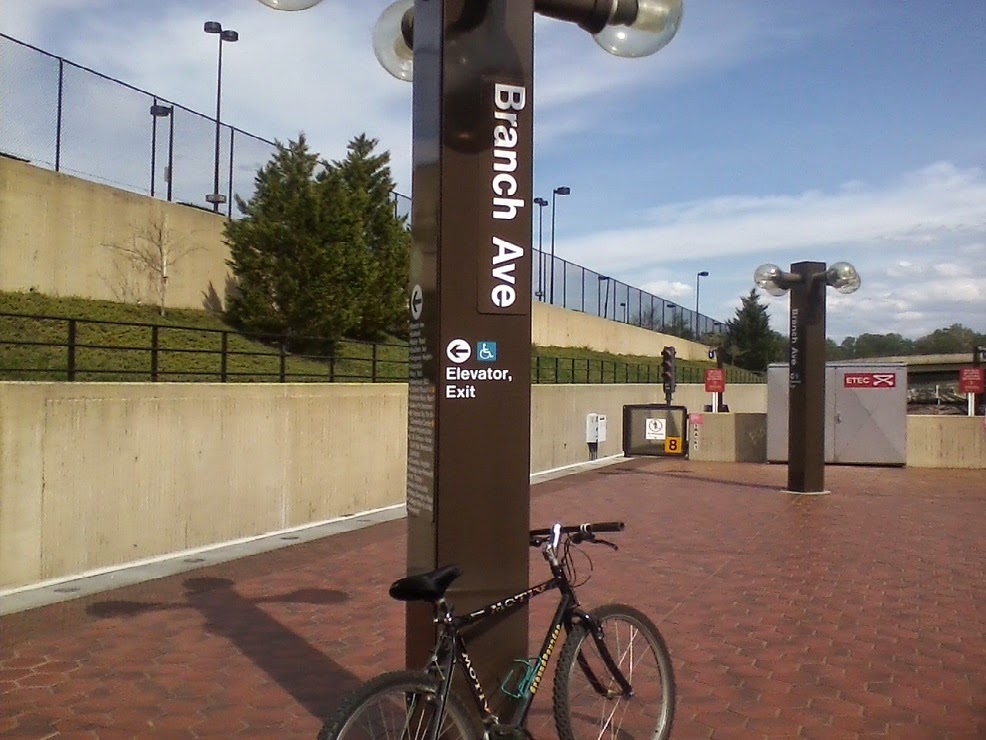 
So this was the entry I tried to post last night but was just too tired. It is now late Monday night (almost Tuesday) and I'm going to try to post one more entry later.
Anyway, regarding on Sunday and follow-through ...
The bike ride was a total disaster -- and it could have been a catastrophe -- there is NO WAY to bike from the Branch Avenue Metro to anywhere.* I could have been killed walking the bicycle along Branch Avenue itself, which is really a shoulder-less high speed freeway. There is just no way to get to the Henson Creek Trail from where I was. I was so close but that final onramp from the Capital Beltway was just too much. Thus, I was trapped between two high-speed freeways with no shoulder and no way to get anywhere, so I had to backtrack (up a hilly incline). Oh, and it reminded me of vacations with my dad - always walking in dangerous and sh!t place.
*I guess there is a POSSIBILITY of going a circuitous way via Auth Road to Allentown Road but even that seems dicey. 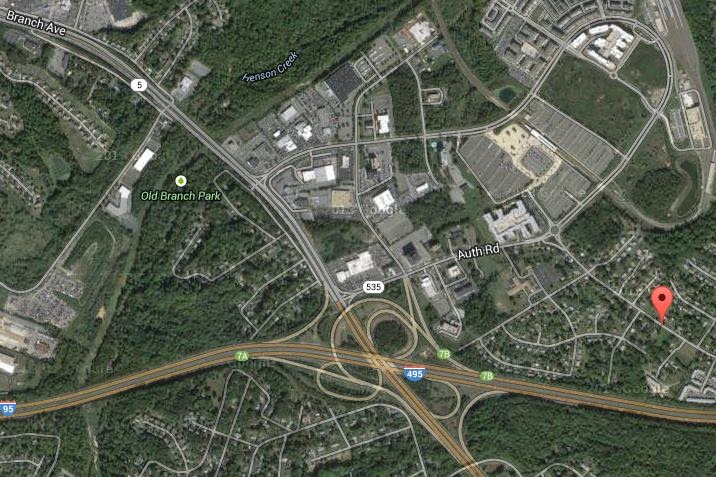 Google aerial view showing the Branch Avenue and Capital Beltway interchange. The Branch Avenue Metro with its expansive parking lot is toward the upper right. Henson Creek runs from the top to the bottom left side.

This part of Prince George's County is SOOOO awful -- that soulless blighted suburban purgatory with roads to no where.

And to make for a really weird bit of irony, there was some sort of weird bicycle race contest on the industrial park-like backstreets near the Metro station (not far from the old NWS NCEP headquarters building) in which the street was marked off with police tap and about 50 bikers kept going around and around in a high speed, pointless race. I got a little (much) too close as I was walking my bike back -- the sidewalk was totally blocked a small but intervening group of spectators, one of whom grabbed my arm as I walked the bike and another person barked at me. That could have also been a catastrophe. Of course, getting obliterated by 50 bikes in a mash-up would certainly attract more attention (maybe even the sh!tty local news) than a hit-and-run at 75MPH by some Prince George's County local and no one ever finds out who did it. 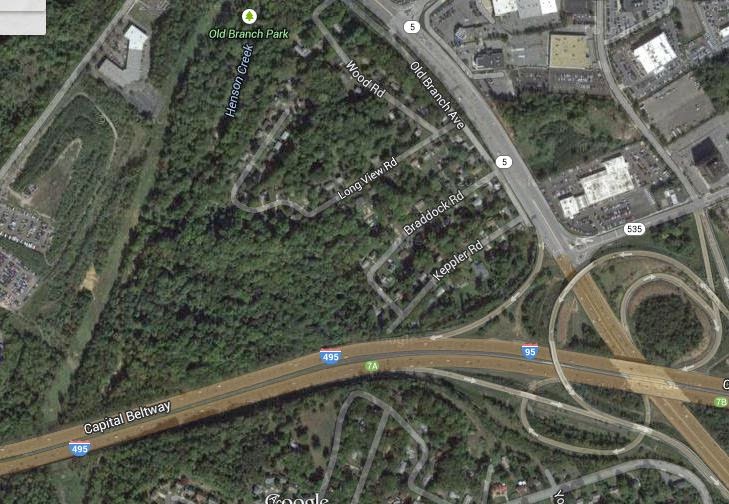 A closer Google aerial view showing the labeled streets in the totally hemmed in area of Wood Lane.  It is hemmed in by Branch Avenue, Henson Creek, and the Capital Beltway.
I am actually curious if there is some trail under the Capital Beltway at Henson Creek. Even so, looking at this map, there really is no way to do it without traipsing around in the underbrush and woods beside a stream in a somewhat dangerous part of Prince George's County.
So in the end, I simply took the Metro back into D.C. after a miserable 75 minutes -- but unharmed, both myself and my bike intact.
Of note, there is this weird little neighborhood that my ADC Atlas states is called "Woodlane" that is hemmed in by Branch Avenue freeway, Henson Creek (no trail at that point, as near as I can tell), and the Capital Beltway. What a nightmare that would be -- the only way out by automobile (though I guess in many parts of America, that's considered a great thing).

Anyway, once back at the Branch Avenue Metro, I had a bad pollen allergy problem while seated on the platform (as I had just missed a train). The problem is that I had forgotten my eye drops even though I was on a variety of anti-histamine meds, I was still in agony. And the wind was blowing all afternoon in the 15 to 30mph range with gusts to near 40mph. 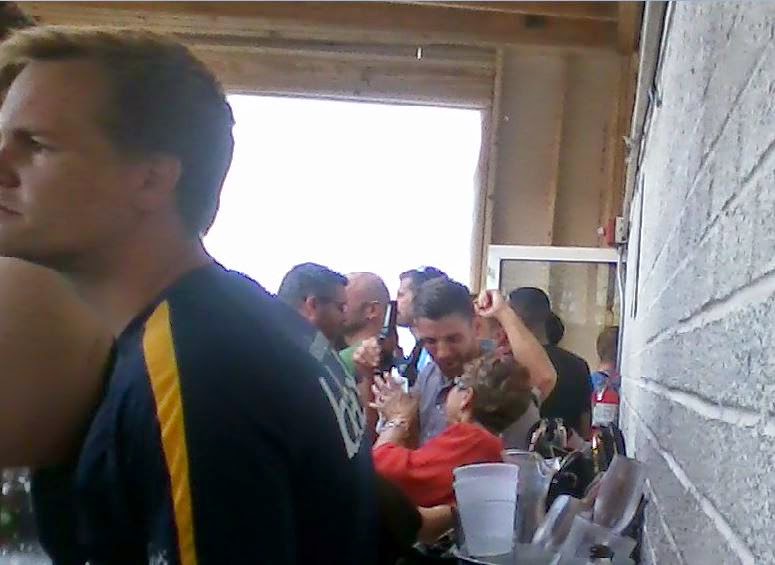 Upstairs at Nellie's, Washington, D.C., 6:07PM May 4, 2014.
On Sunday afternoons one can see quite the hodgepodge of people -- from the local gay sports league players (all sorts except the kickball ones -- they go to JRs). On this afternoon, I saw two women carrying a baby and a stroller out of the place -- and I heard one young guy say incredulously to his friend, "Who brings a kid to a bar??" (my dad did ...) -- and also a senior citizen lady talking to a young man (in the above picture).
There is construction going on up there to make the space enclosed with skylights and large windows.


After Nellie's, I headed over on my bike to Larry's Lounge, where I met Wendy at 630PM. She brought Tacoma on a sort of maiden voyage to Larry's Lounge -- and quite possibly the last such voyage. Tacoma, a 100+ pound malamute, was a very distracted dog, at once overwhelmed by all the people, sights, sounds (including fire trucks) and oddly disinterested. The following set of pictures of Wendy and Tacoma were taken there ... 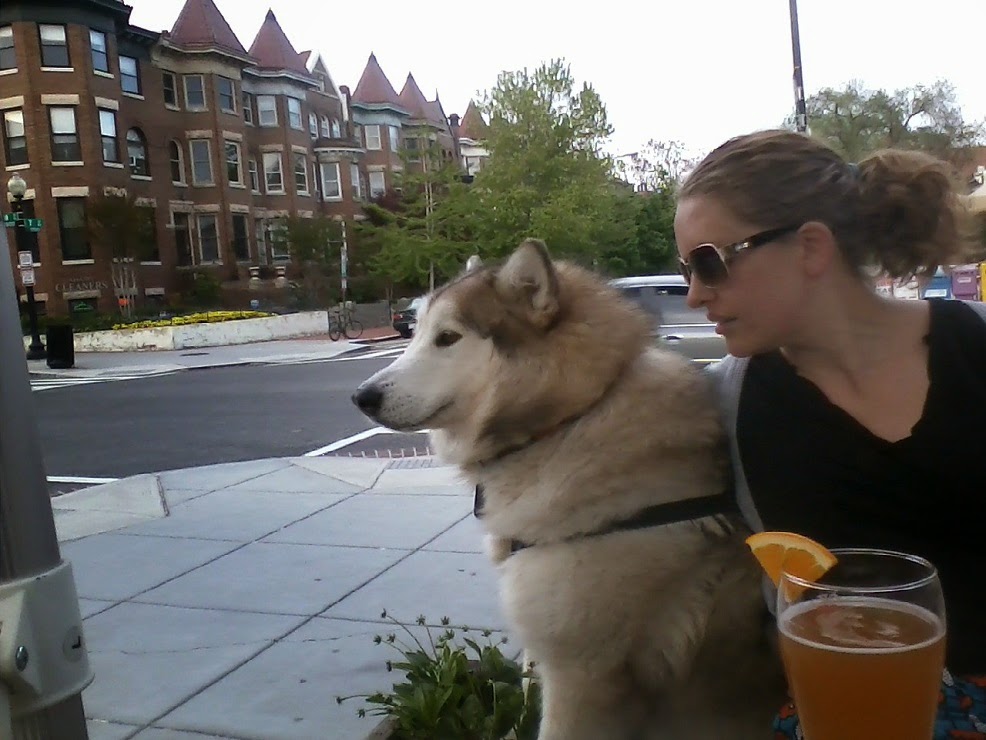 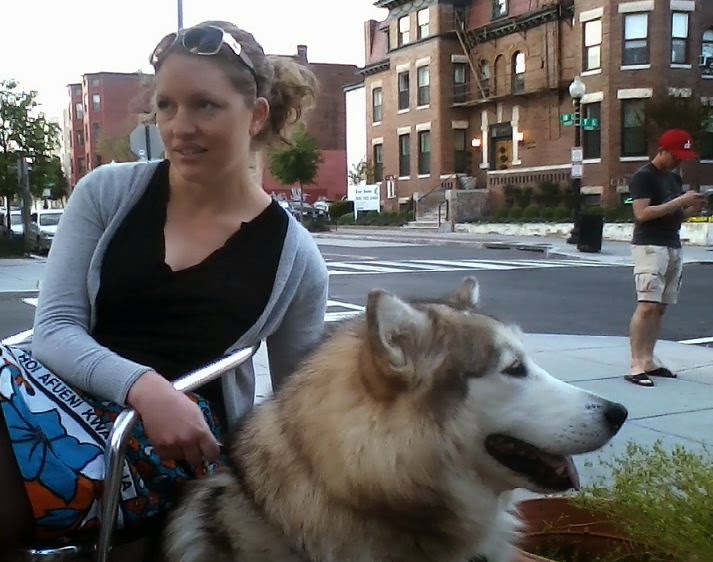 
Gary also showed up and we sat outside until dusk, and it even got a bit chilly as the breeze slowly relaxed. Wendy and Tacoma left and Gary and I went inside for a bit longer.
I got home around 11PM and started watching all those old TV sitcom reruns I watch. Last night, it was Antenna TV including that strange show WKRP in Cincinnati. If fell asleep before Too Close For Comfort came on. I quite like that show (can't explain why). As for the red house featured in it, I wrote about it once two years ago (bottom line: it's no longer bright red -- booo.).
-Regulus
Posted by Regulus at 11:57 PM