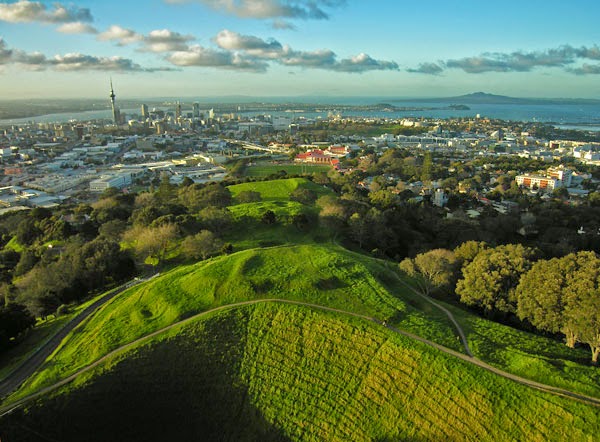 A lovely aerial view of Auckland, New Zealand with Mount Eden -- a dormant volcano -- visible in the foreground.
*******

Home at the 10PM hour on this Saturday night as I start this entry. This is just going to be a brief entry. I was going to post one of my weekly jukebox Saturday night entries. However, I don't really have anything I want to post this week. Indeed, I have sort of been running out of things to post -- though not because there is any shortage of songs to post. Quite the contrary.


I had a very good gym workout today that included the full regimen of jogging, weightlifting (light-to-moderate), and swimming (30 minutes) -- at the Anthony Bowen YMCA. My jog was 6.21 miles / 63 min. 21 seconds including 5-minute cool-down based on a goal of 848 calories (before the 5 minute cool down). For the jogging on the treadmill, I chose two courses. First it was the New Zealand South Island run including TWICE on BOTH Skippers Canyon Road and the Summit Key Track in Fiordland National Park. Second, it was the New Zealand North Island run in Auckland to the top of Mount Eden, which I had not done before and was intrigued by that place (hence the lead picture and the one directly below. Oh, yes, I should mention that the music at the gym was fine (recall I have had some issues on that matter of late). 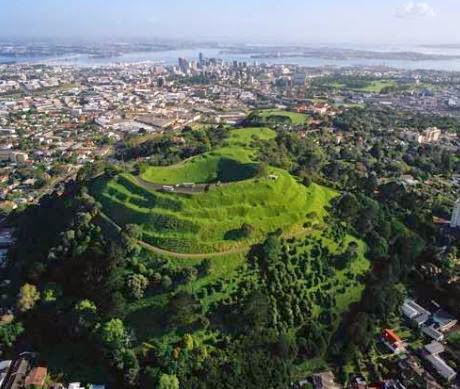 
I do want to note that I've gained 2 to 3 pounds and I'm in the 144 pound range. Of course, I'm still down about 40 from my fat peak nearly 2 years ago. I cannot tell if this is because I've put on any additional muscle -- I feel like I have a little but I could be wrong. But I will add that while my diet is mostly fairly good and in moderation with very limited fast food or excessive sugar, fat, and salt intake, my main failing (liquor) is also potentially contributory to putting on weight what with all the resulting sugar. As it is, at my age and given my body type, my body "wants" to put on weight. 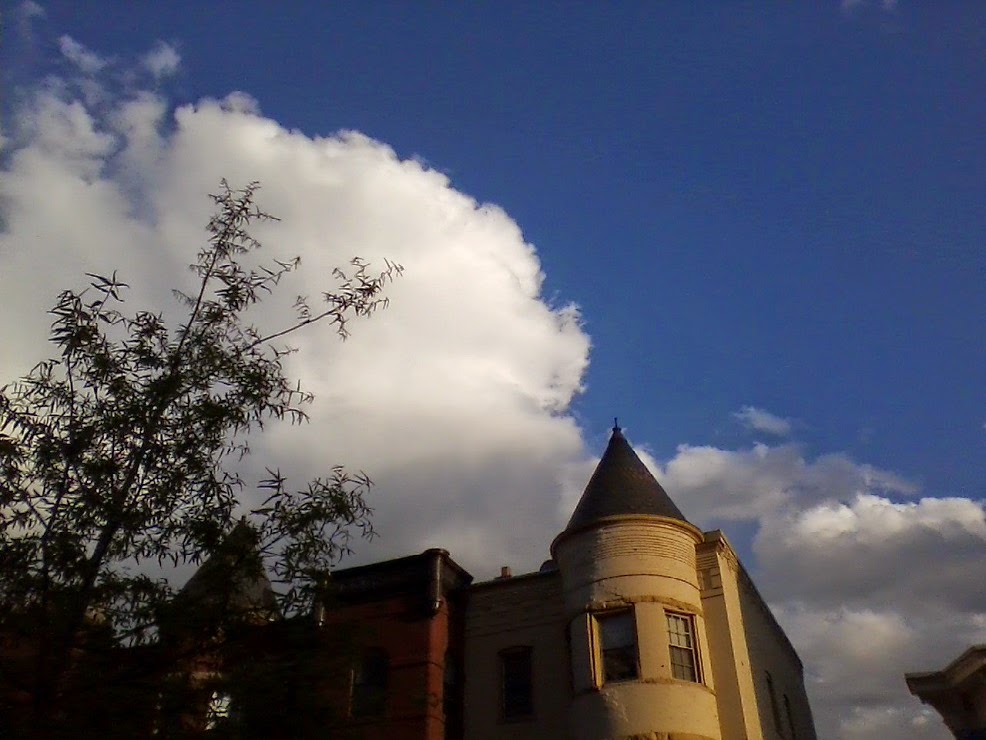 The view outside the Anthony Bowen YMCA in the 1300 block of W Street NW, Washington, D.C., 6:51PM May, 3, 2014.
That particular cumulus congestus cloud actually was bigger than it looked and it had virga associated with it -- and, briefly, a rainbow.
******* 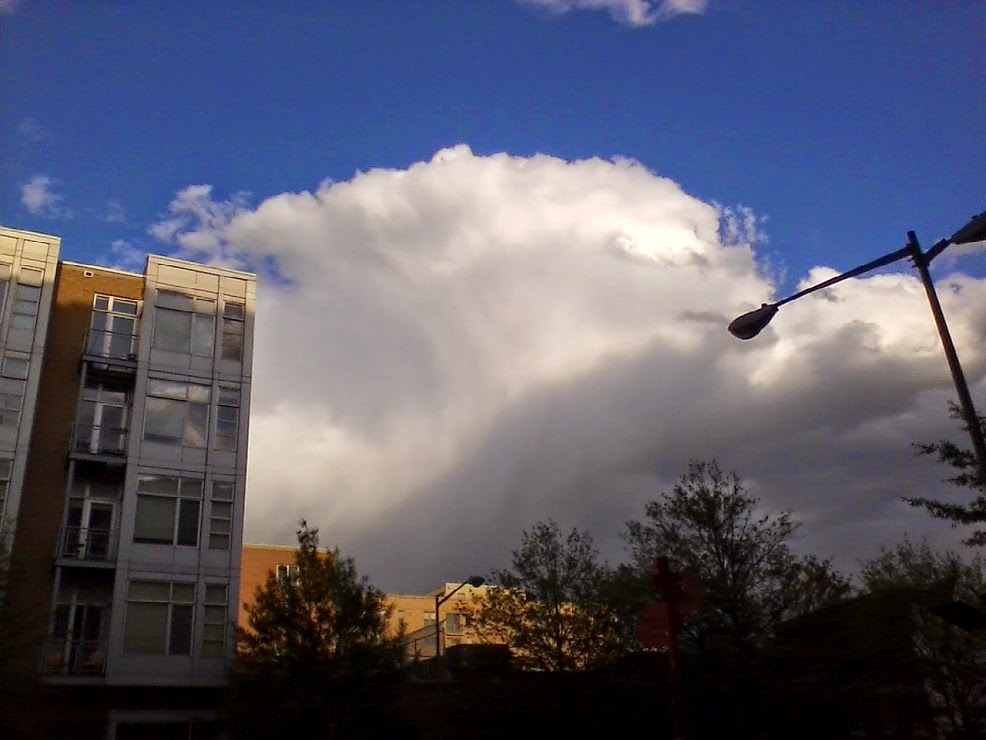 
Speaking of eating, after my jog, I had one of those Clif protein candy bars from the vending machine. They really are quite tasty. I'm always skeptical about the nutrition claims, especially given how good they taste, but I've seen (much) worse FDA labels for items. And, I suppose, they are quite suitable as an energy bar during a good workout. 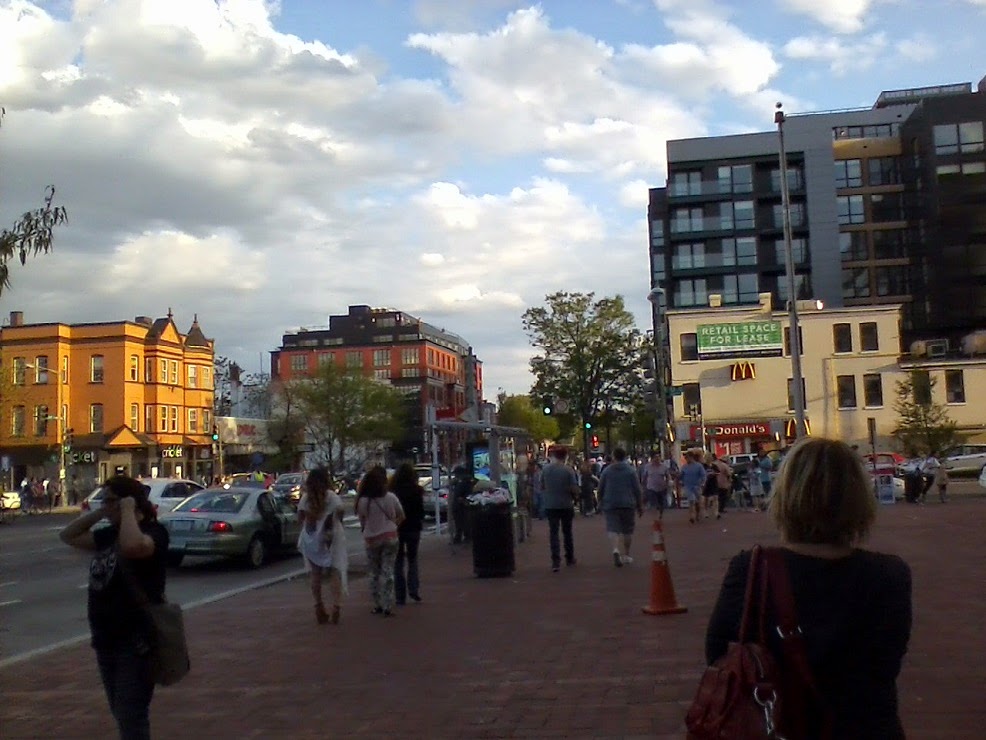 
Again speaking of food, tonight, I'd like to do my Old Ebbitt Grill dinner. I haven't done that in a while. Of course, I'd like to do something different in terms of going out than my usual routine. However, I'm terribly a creature of habit -- and speaking of which, right now, I am watching my usual Me-TV Sci Fi Saturday night lineup. The Star Trek: The Original Series episode was "Is There In Truth No Beauty?" and guest starred Diana Muldaur, who later was on Star Trek: Next Generation as Dr. Katherine Pulaski. 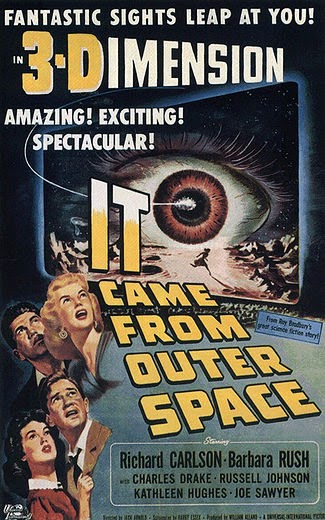 I'm rather enjoying this movie, and the eerie background music is just awesome -- it reminds me of being at my maternal grandma's house on Henry Street in South Amboy watching these kinds of movies with my uncle circa 1978 on my weekend visits there from Long Branch.


The movie is said to be based on Ray Bradbury's short story The Meteor. I've not read that short story so I can't verify how close it is to the movie.
Oh, yes, Svengoolie's solo song set to "Yellow Rose of Texas" about Barbara Rush's character always screaming is pretty damn funny.
Anyway, as for tomorrow, I plan on taking a bicycle ride in the afternoon. Specifically, I want to take my bike down to Branch Avenue -- yes, deep into sometimes-sketchy "Inner" Prince George's County -- and bike along the Henson Creek Trail. 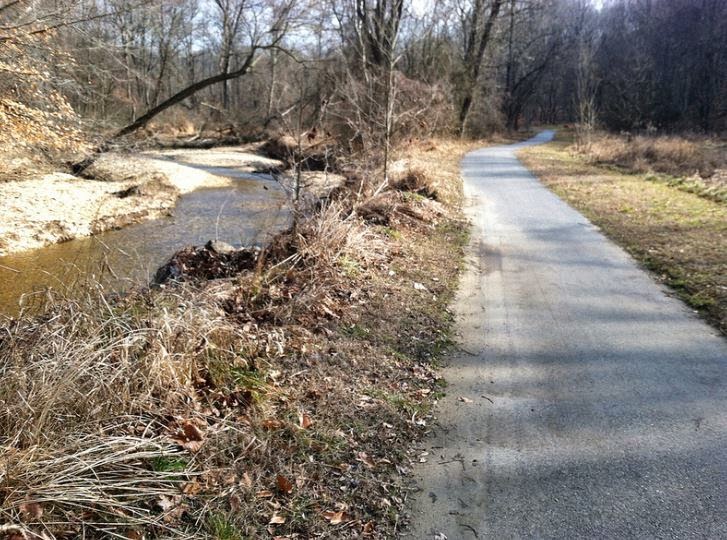 The Henson Creek Trail in Prince George's County, Md., in a picture I found online.
*******


My goal is to get over the Woodrow Wilson Bridge into Virginia and bike back on the Mount Vernon trail after stopping in Old Town. This requires going near / through the National Harbor area. However, my Washington, D.C., ADC map is now ten years old and doesn't show anything constructed, so I'm not entirely sure which way to go.
The Prince George's County Dept. of Parks and Recreation website indicates that there is something called the Woodrow Wilson Bridge Trail, except the site has no maps.
UPDATED 9:00AM 5/5/2014: The attempted bicycle ride was a total disaster. You simply cannot get to the Henson Creek Trail from Branch Avenue Metro in any safe fashion (unless there is some way via an unknown footpath that would have to take you across / through the creek, and THAT doesn't sound safe down there). The roads are meant only for high-speed traffic, and I had to abort the bike ride. I also had a bad allergy attack due to extremely levels of pollen (and despite my allergy meds I had taken). This was partly because I forgot my eye drops. Anyway, it was a disaster, though I came to no harm, and I headed back into D.C. Of note, that part of Prince George's County is disgusting.
My plan is to update the blog later tonight after work and the gym. I feel crappy this morning with pollen-induced raging allergies that mimic a cold.
End of update.


OK, that's all for now. My next update might not be until late Monday.
--Regulus