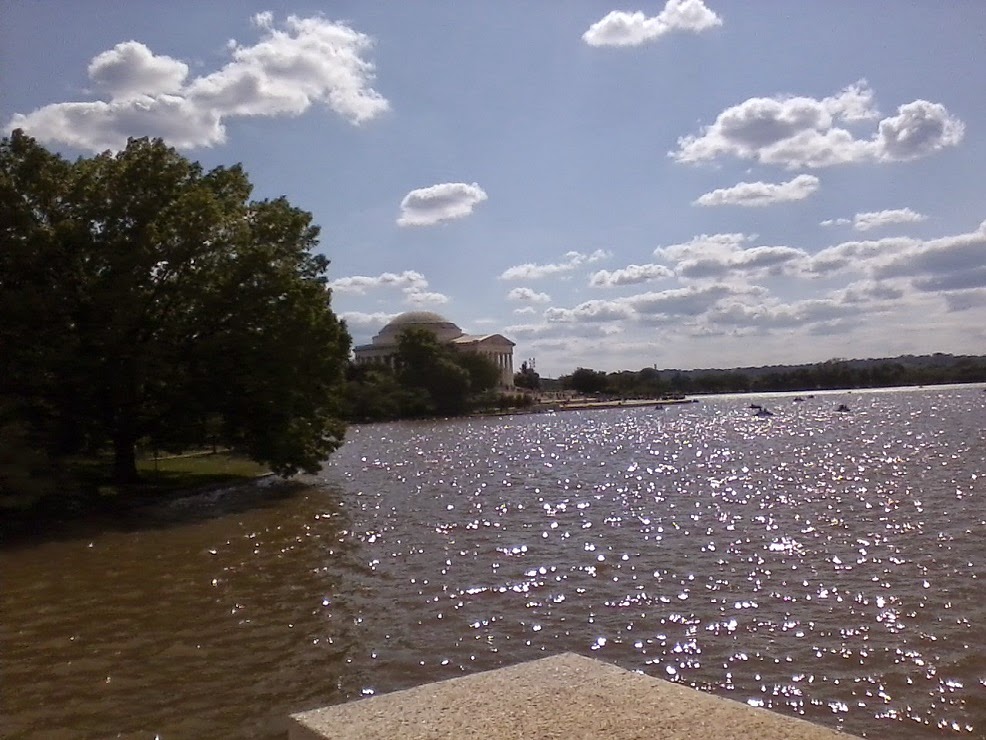 Sunlight sparking off the (turgid) Tidal Basin waters (elevated to near flood stage from all the recent rains) with the Jefferson Memorial nearby, Washington, D.C., 4:07PM May 18, 2014.
This is the view from the Outlet Bridge above which is the connection between the Tidal Basin and the Washington Channel that runs on the northern side of the East Potomac Park to Hains Point.
*******


This entry ended up being a bit confusing ... It started as just a brief recap of my Monday but then I interspersed the pictures that I took on my bicycle ride along with extended captions. To be clear, on Sunday I biked down to the Mall and then over to East Potomac Park to Hains Point (partly because I wanted to see how high the river actually was). Not pictured is the part where I biked back over to the Lincoln Memorial and then up 21st Street past graduation day throngs in the GWU / Foggy Bottom district (I had to walk the bike) and thence to Dupont (though stopped for lunch at Lindy's Red Lion). 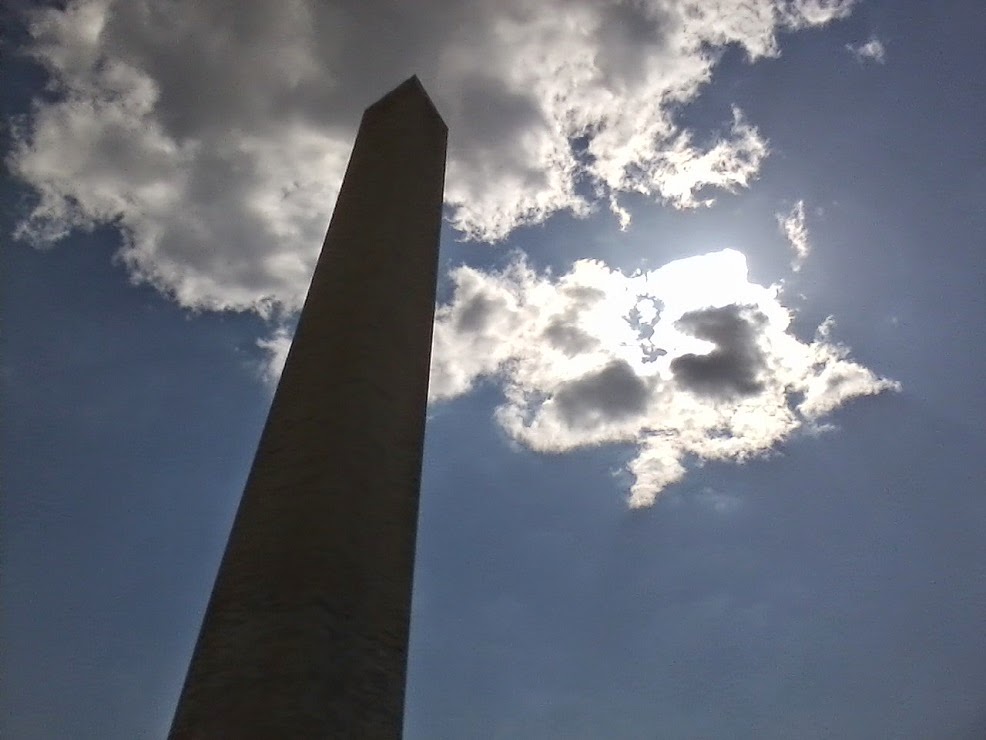 The Washington Monument almost silhouetted on a bright blue sky fleeced with fair weather cumulus clouds (one of which was just concealing the Sun), Washington, D.C., 3:56PM May 18, 2014.
The Monument just reopened this month following the repairs from the August 2011 earthquake.
*******


I managed to complete this roughly 8 mile bicycle ride despite the fact the bike gears were not functioning properly. In the end, my attempt to shift gears made things even worse and the bike is more or less unrideable now. I need to take it back to The Bike Rack and inquire about more major work. 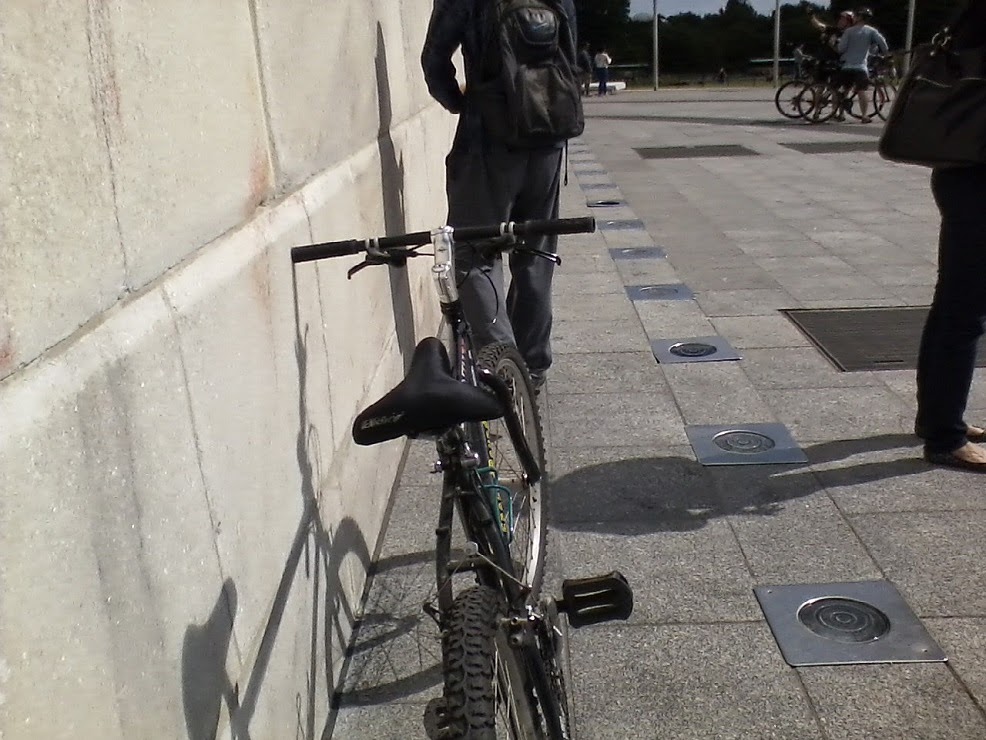 My bicycle resting against the base of the south-side exterior façade of the Washington Monument, Washington, D.C., 3:58PM May 18, 2014.
The man in the image had just leaned against the Monument but then abruptly moved, so I didn't get the full interesting picture with shadows.
*******


As for the Monday update, I had intended a longer entry but it's just too late. I'm home now at the midnight hour watching TV (yes, reruns of The Golden Girls) and having a late dinner. (I cooked pork chops but they smelled funny from the get-go after having been in my refrigerator for almost a week so I threw them out and instead sautéed those Tyson beef strips with mushrooms and made my usual steamed Jasmine rice, broccoli and carrots.) 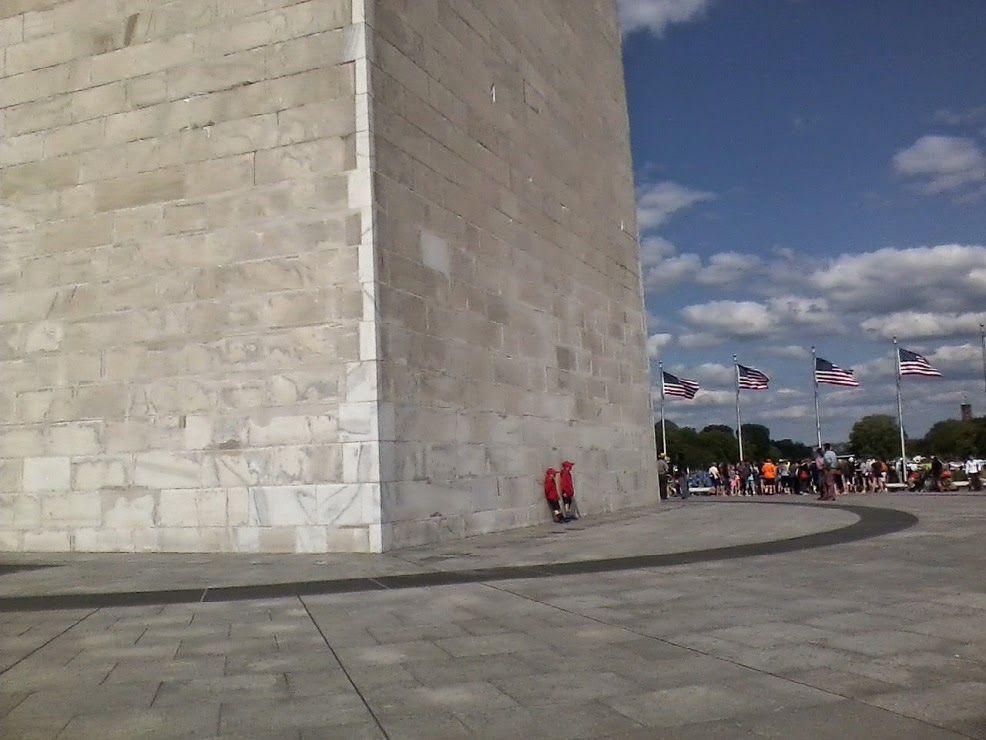 Two young children -- quite possibly brothers -- leaning against the base of the east-side exterior façade of the Washington Monument to get their picture taken, Washington, D.C., 3:59PM May 18, 2014.
As noted, the Monument reopened this month following its earthquake repairs.
*******


I also went to the gym tonight, although once again, I skipped the pool at the Anthony Bowen YMCA. I skipped it last Wednesday and on Saturday it was too crowded with a young children's "pool party," and instead I went to the big pool at the National Capital YMCA after my workout at the first gym. 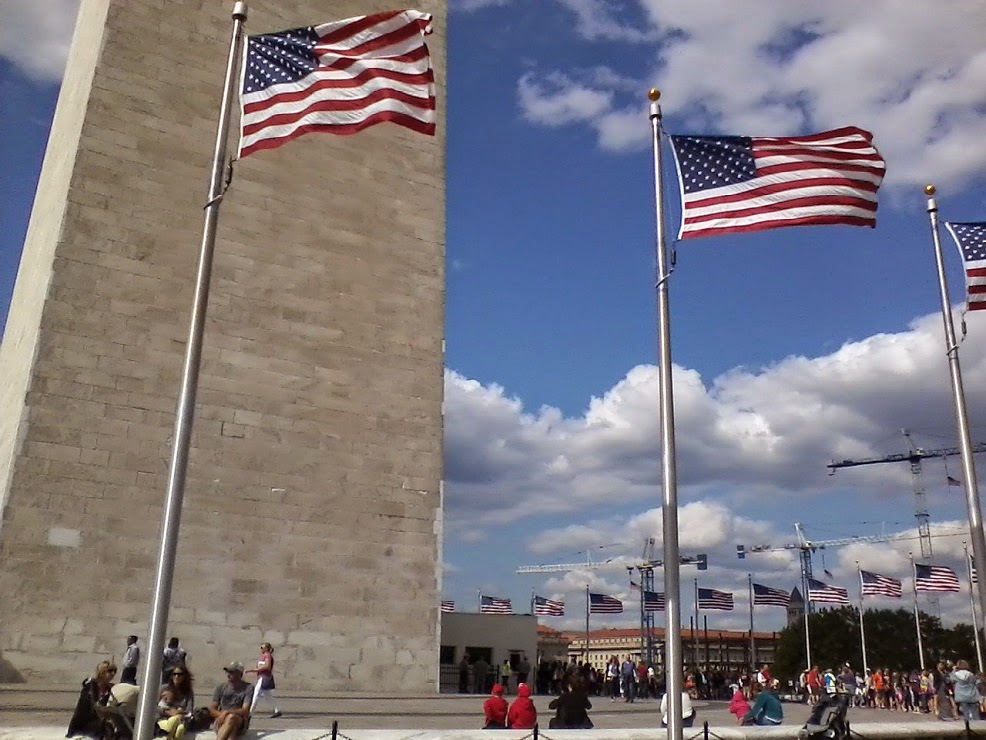 
I was in a terrible mood nearly all day this Monday  (until the gym) -- both because I had such a crappy weekend (of the sort I am so over) and because the clothes I were wearing were so FUGLY. All my clothes are so tent-like and voluminous. To be clear, I have been able to dress borderline casual at work with cargo khakis and polo shirts or -- the sort I really like -- the somewhat oversized long-sleeved golf polo shirts. However, in the expectation of the new position at work, I am trying to segue into wearing the usual office casual with button down shirts. 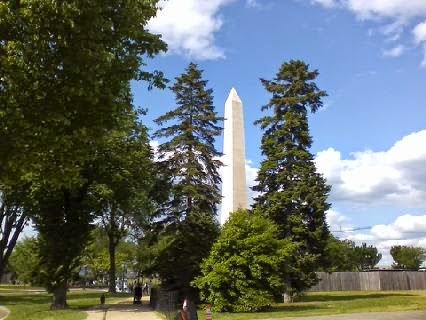 The Washington Monument framed by two evergreen trees as seen amid the maze of (rather busy) streets by the Tidal Basin including Independence Avenue and Maine Avenue, Washington, D.C., 4:03PM May 18, 2014.
*******


As usual, though, this failed since my dress shirts are all so damn ugly and my "dress pants" are so worn and wrinkled. My clothes get unusually heavy wear and tear, but I'm not sure how that is ... unless it is how I launder them (washing and drying). I was very upset and came home and threw out the shirt and will soon be turning those ugly pants into a pair of shorts. (I also never wear shorts these days except on my Jersey shore visits or if it is a weekend and around 100F in the hottest heat of summer.)  So my plan is to spend between $300 and $400 next pay period on clothes. 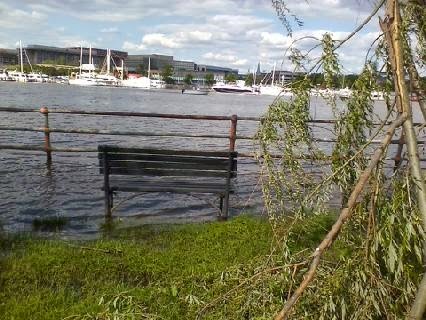 
OK, that really is all for now. I need to be in bed by 1AM 2AM because -- and this is part of my impending new schedule -- I need to adjust my work schedule from the 11AM to 7PM one I've been effectively keeping for a while now to a more regular 9AM to 5PM. Working directly with a Federal client (again, assuming this new position comes to pass) requires this. 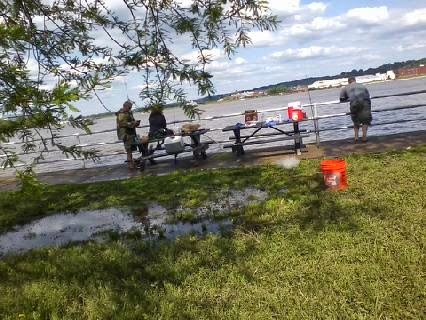 A small group of people -- possibly a family -- fishing on the Washington Channel side of East Potomac Park near Hains Point, Washington, D.C., 4:21PM May 18, 2014. The large figure on the right was in fact an adolescent 12 year old boy.
MANY people fish along the edges of East Potomac Park -- especially on the calmer Washington Channel side -- despite how foul and littered is the water. Whole rows of vehicles park down there. Many of the people fishing are Hispanic / Central American or African American (and this Sunday was no different), but this small group were white of a certain working class exurban / fringing rural Maryland or Virginia that don't really live in D.C. proper anymore these early 21st Century yuppie boomtown days. (There is a golf course that occupies the bulk of East Potomac Park that attracts more of the usual D.C. crowd.)
*******


My next blog update likely will not be until Wednesday night, but I envision it as short and perfunctory. I'd like to post an entry Thursday, or rather, I had intended to post one at the junction of 11:59PM Thursday / midnight Friday to mark a 10-year occurrence involving the usual utterly exhausted and dumbass topic ... except part of me actually doesn't give a damn ... However, I have planned a somewhat musical - humorous one. As a sneak-peak, it is a parody of Arthur's Theme called Richard's Theme. However, I'm not sure at this point whether I will post it or not. 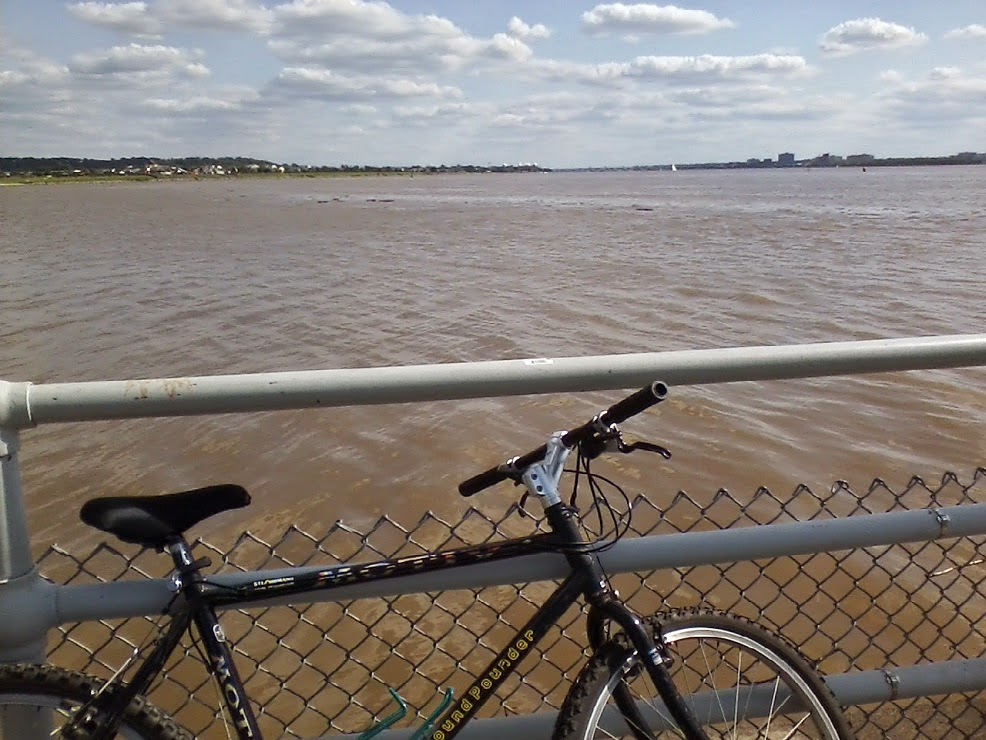 My bicycle at the very tip of Hains Point in East Potomac Park, Washington, D.C., 4:24PM May 18, 2014.
This is where the Anacostia River and the Washington Channel merge into the expansive tidal Potomac River. The view is to the due south. The Potomac was at borderline flood stage from all the recent rains and was extra turgid - muddy and nasty looking. It was also really tearing along and carrying debris human (garbage / litter) and natural (large tree branches and trunks). This makes the river extra dangerous on such days.
*******


As for Thursday evening/night, Jim is in town from Milwaukee and we are supposed to meet at Larry's Lounge. Tonight is a pleasantly cool, still one with temps around 60F here in D.C. at the midnight hour and dew points around 47F. 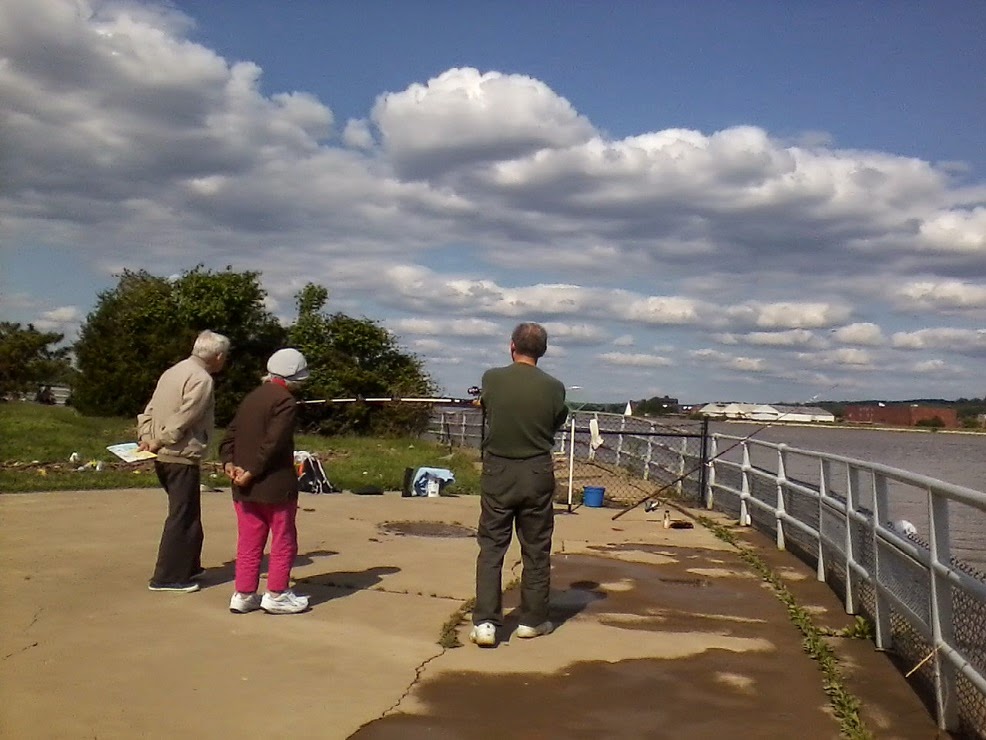 An old Asian (Japanese?) couple watching a young man -- who, unfortunately, is completely hidden by a fourth person in green -- fishing at the very tip of Hains Point, East Potomac Park, Washington, D.C., 4:25PM May 18, 2014. The fisherman was in the act of casting his lure.
The ground was littered with nasty effluvia from the previous flood crest.
Of note, "The Awakening" multipart sculpture was moved about six years ago to its present site at National Harbor, so it no longer occupies its place at Hains Point.
*******


OK, that's all for now ... except for one last image (which was actually, the first one I took on Sunday) ... 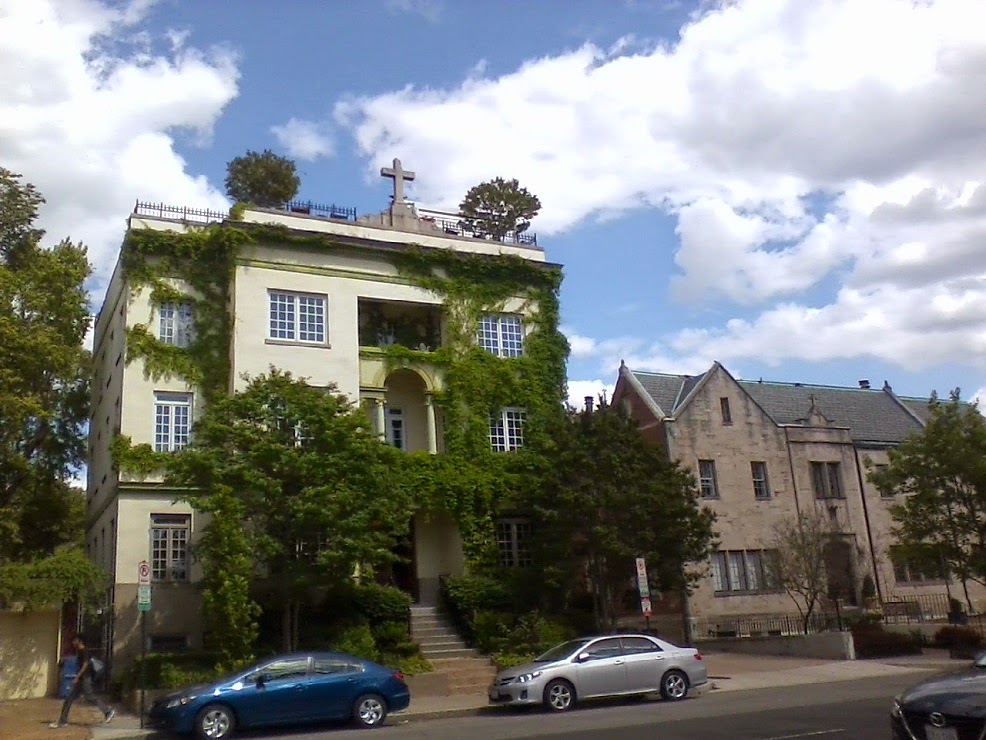