Just Add Water, Ice, and Warmth Mixed With Sunshine -OR- It's Weather Elementary 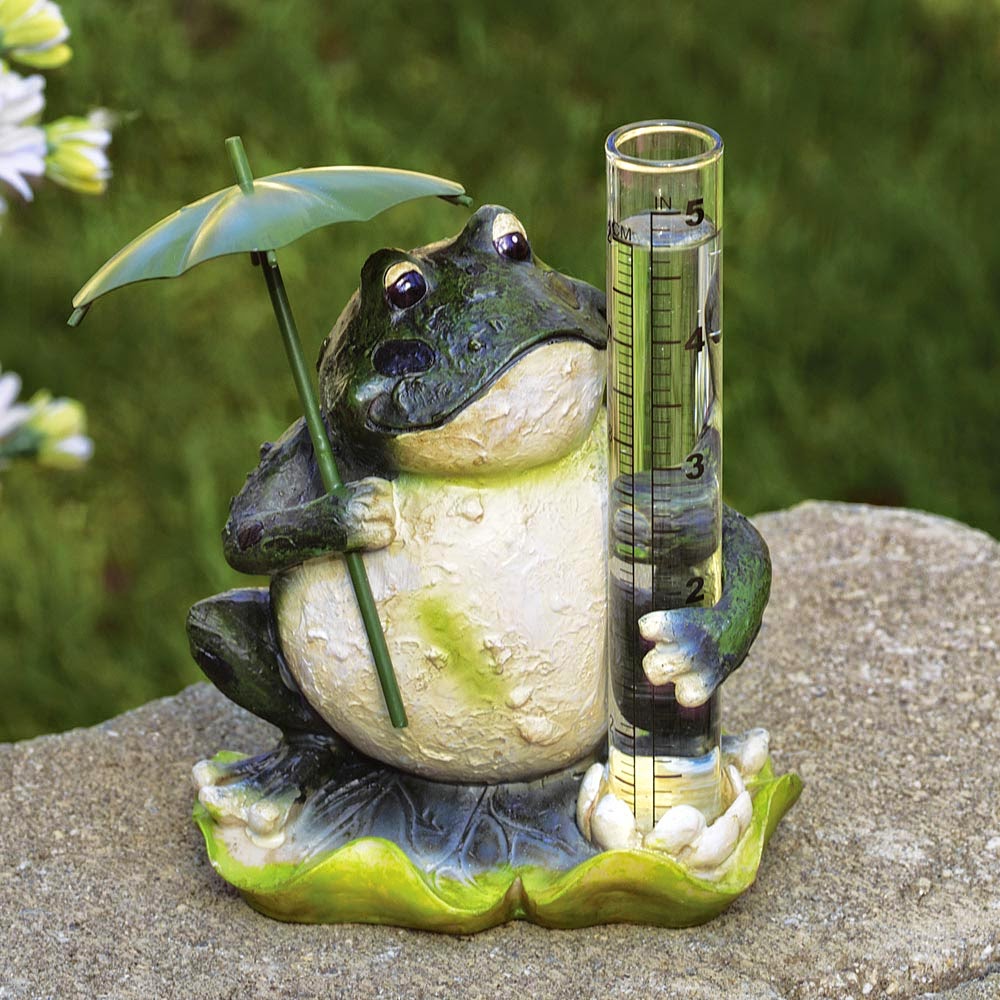 It's about 7:15PM and I'm still at work where I am sort of doubly stuck for the time being. First, there is Biblical deluge happening outside at this precise moment across the District of Columbia and immediate environs in an exceptionally dark and gloomy evening, and even if I had an umbrella with me (which I don't), it wouldn't be much use. Rain is slashing against the windows. 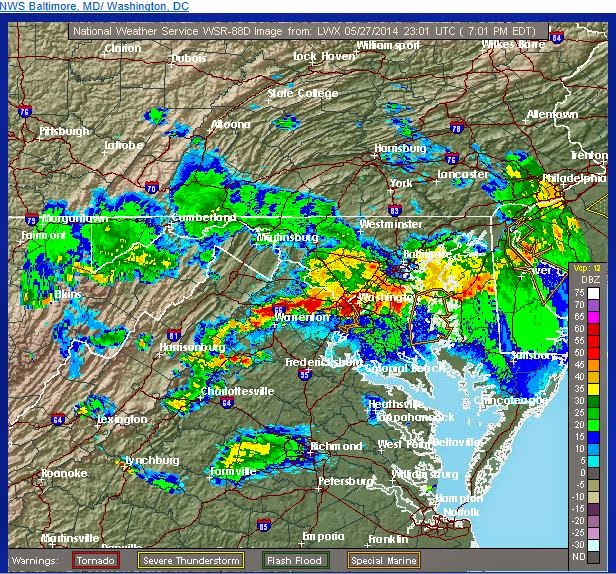 The Sterling (LWX) NWS radar in enhanced composite mode, 7:01PM May 27, 2014.
The radar's composite mode tends to look more dramatic as it shows activity within the clouds as well as what is falling. Still, this is a dramatic radar image.
*******


Secondly, I may or may not be having that long-delayed dinner with Cole at Old Ebbitt Grill. If so, it would be on the late side (around 10PM). It's something I sort of planned with him a long time ago. As it is, if he can't do it tonight (it's a work-related schedule issue), then it won't happen for at least another week. (This is relevant since the restaurant is about half way between my apartment and office).
Lightning is flashing outside -- although I don't get much of a view from my cubicle, just a portion of a non-descript office building around L'Enfant Plaza. The thunder makes an oddly muffled, vaguely threatening sound as heard through the sealed glass windows and reverberating off the buildings down in this part of the city. It's all the more vaguely sinister as I'm here in the office by myself and the building is mostly empty, too. 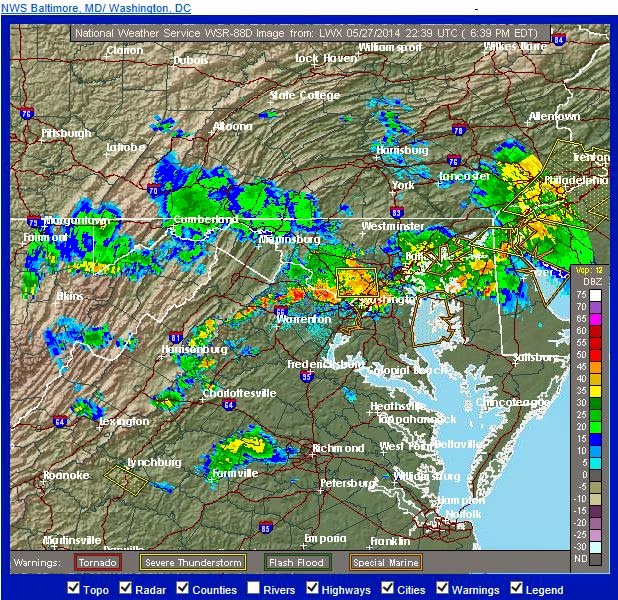 The Sterling (LWX) NWS radar in enhanced base reflectivity mode, 6:39PM May 27, 2014.
This was the radar as the t-storms approached.
(I really should try to use the much better radar imagery that is now offered on the Sterling website, but I just haven't gotten into the habit of it yet.)
*******


There is presently a severe thunderstorm warning out for the District, but it should be over by the time I post this entry. A severe thunderstorm watch is up until 9PM EDT for the region. This is a classic t-storm rolling down the Potomac River into the District and the Tidal Potomac south of the city.
The office is dim -- I turned off the main lights and only a few random overhead ones are on along with my tiny little lamp on my desk that I seldom use.
Temps today reached 92F at National Airport (KDCA), only the second time this season so far at that official climate spot and tying the 92F set on May 13th for warmest of the season. (For me, the fewer 90F days, the better.) KBWI reached 90F and KIAD reached 87F. As for this thunderstorm rain, it's ALWAYS a HIGHLY iffy proposition how much will actually fall in the official rain bucket at KDCA.
I should note that the High Resolution Rapid Refresh (HRRR) model quite accurately captured this thunderstorm complex moving across the District and environs at the 7PM hour: 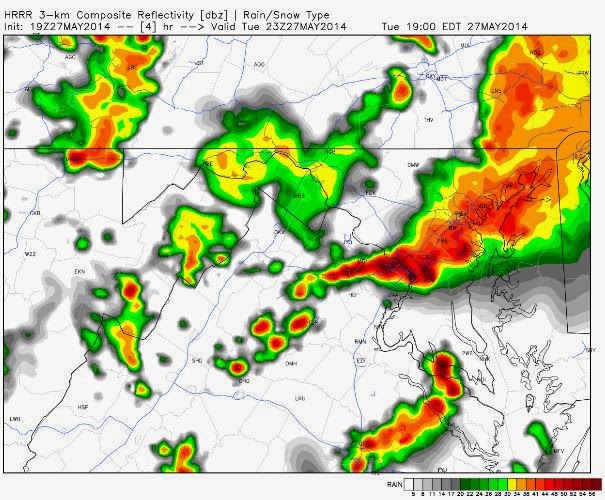 HRRR 3-km resolution composite radar simulation for portions of the mid-Atlantic including the extended D.C. / Baltimore Metro areas valid at 7PM EDT May 27, 2014 -- with the picture prettied up by WeatherBELL Analytics. I'm not sure what time was this particular HRRR run.
The image is taken from this Capital Weather Gang entry posted earlier this afternoon.
*******


Of note, the CWG had two other interesting entries today, May 27th. The first is about all the ice remaining on Lake Superior and what an odd juxtaposition it created with folks at the beach along the lakeshore (or even on the water) in the 85F weather over the weekend. 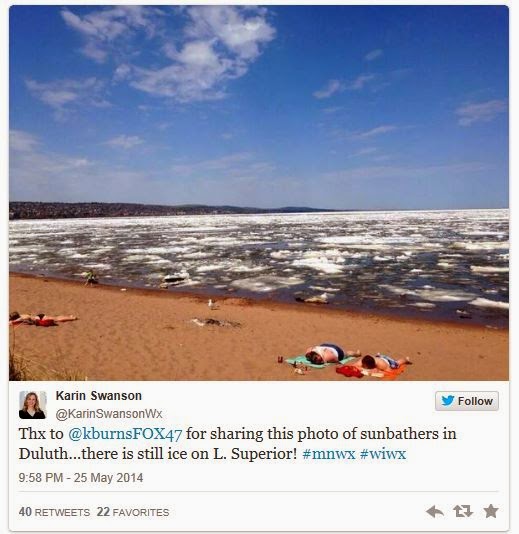 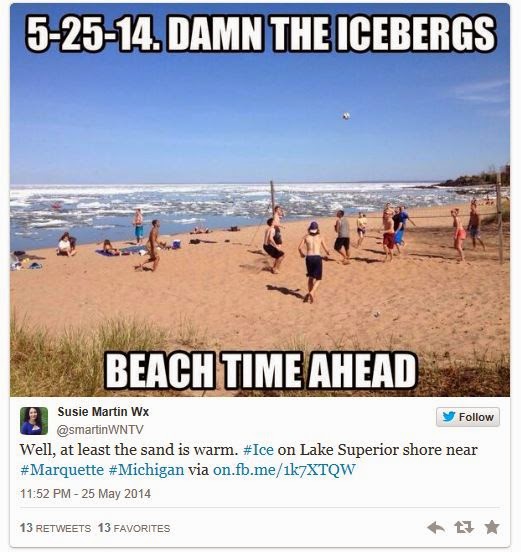 Beachgoers enjoy a very warm day along the shores of Lake Superior near Marquette, Mich., despite the residual ice in the water from the near-record Great Lakes freeze-up this past winter, May 25, 2014.
*******


The second is about all the strange -- even freakish -- accumulating hail storms that have hit such widely disparate places including São Paulo, Brazil; Vilafranca del Penedès, Spain; and Myrtle Beach, South Carolina in the past 10 days.
A Tweeted image from São Paulo, Brazil, May 18, 2014 ... 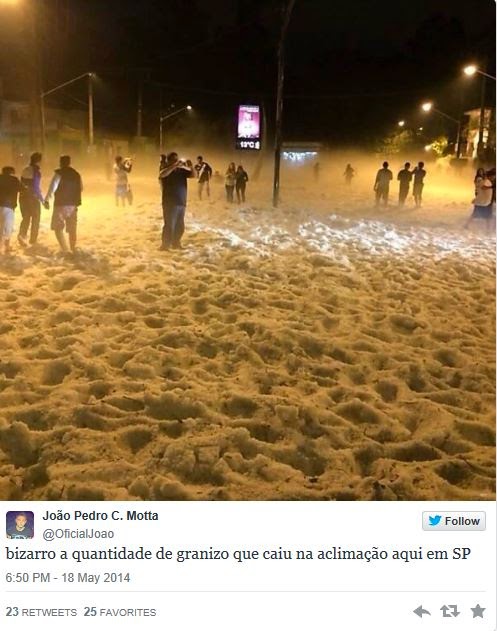 I haven't really researched this issue, but this has to be a very unusual event for São Paulo -- by which I mean so much hail in a thunderstorm as to mimic a snowstorm. Based on the reactions of people, that much hail is truly an unusual event.
******* 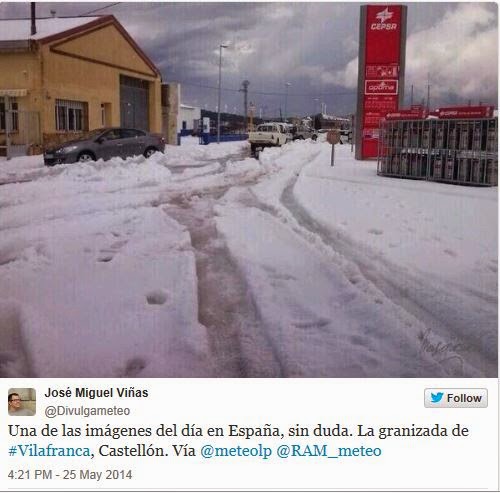 Ditto the hail storm that hit Vilafranca del Penedès, Spain not far from the Mediterranean Sea, on Sunday shown in the above Tweeted image.
*******


So at this point, the storm appears to be winding down. I don't think I am going to take my computer home tonight (regardless of whether this dinner comes to pass or not). But this means my weekend entry will be (predictably) delayed. As for tomorrow and Thursday, I plan to have regular gym nights after work. My next planned update should therefore be late tomorrow. Right now, I'll just start to head back toward my place and see whether I get a text or not.
--Regulus