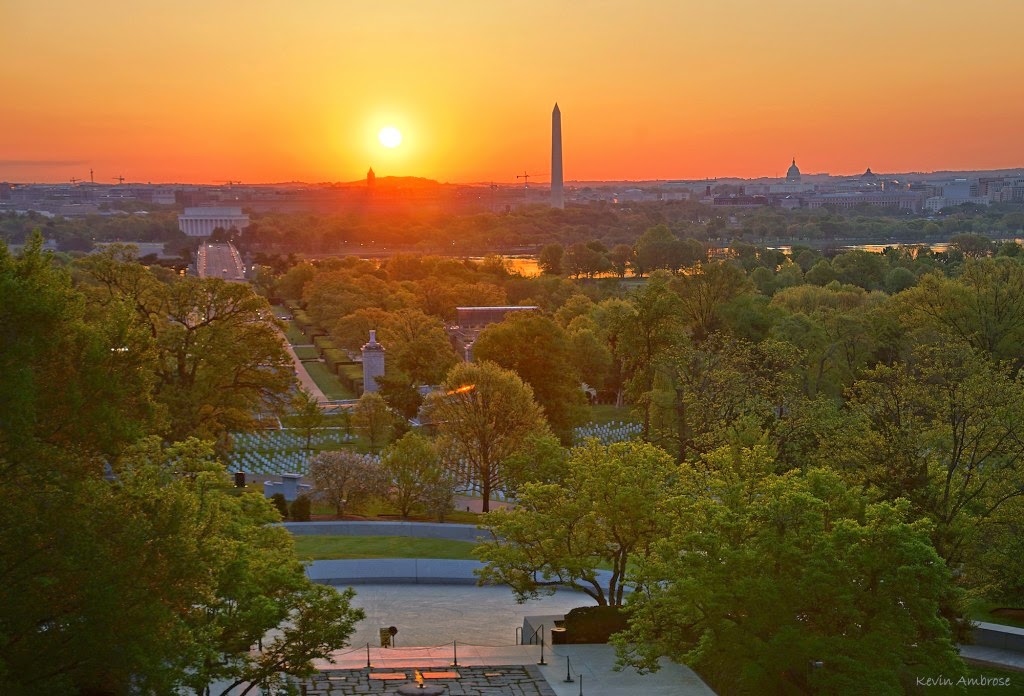 An absolutely lovely picture taken by Kevin Ambrose of the Capital Weather Gang on Sunday morning, May 4th, 2014, at sunrise from Arlington House at Arlington National Cemetery overlooking the "monumental core" of the District of Columbia. It was posted in this CWG entry on Monday. (The entry features other very nice pictures from Arlington National Cemetery.)
The Sun rose, I would estimate, between 2 and 3 minutes earlier, and in this photo, the solar disk has already cleared the horizon. (Well, the Earth's angular rotation is about 832 miles per hour at our latitude or about 1,220 feet per second, so it's all moving pretty fast.)
Two key points:


One, the vantage point is actually to the east-northeast (looking just about straight along the Arlington Memorial Bridge) with the east-west axis of the National Mall -- as anchored by the U.S. Capitol and Lincoln Memorial on the east and west sides, respectively, and the Washington Monument sort of in the middle (actually, a bit closer to the Lincoln Memorial) -- running at an angle to the image, hence the alignment of these famed structures in this picture.
Two, that hilly bump on the horizon just below the Sun is actually Mount Hamilton, the forested grove at the National Arboretum. It is also filled with azalea bushes. Mount Hamilton actually forms a bit of topography on the District's landscape but few people ever actually notice it, much less know what it is.
******* 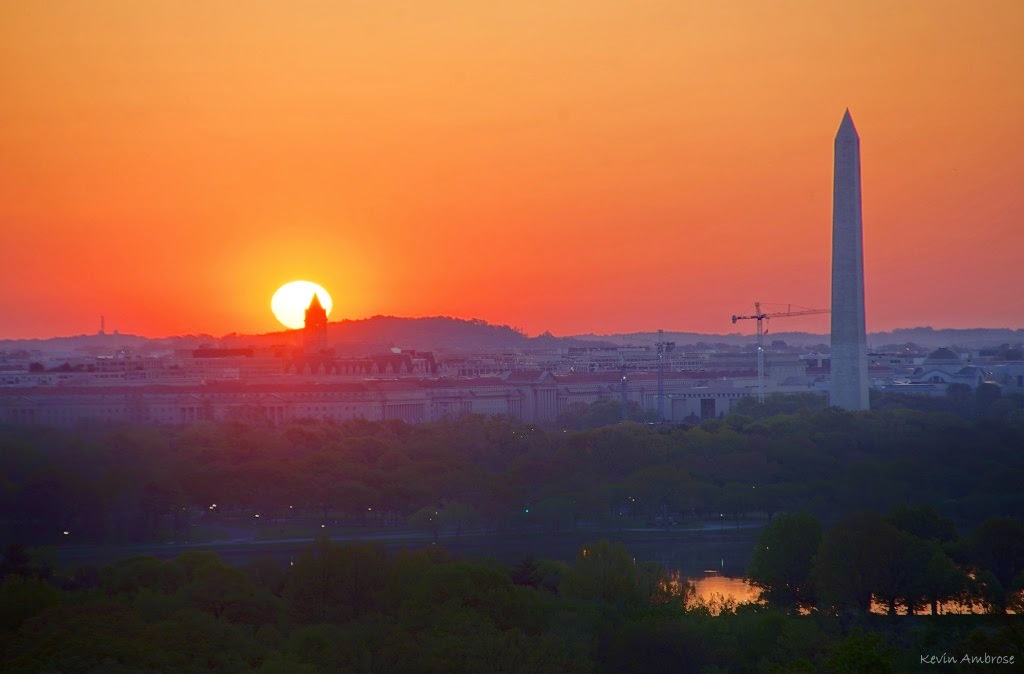 Here is a close up of the actual sunrise a few minutes earlier with the solar disk not only peeking above Mount Hamilton at the National Arboretum and actually silhouetting the Old Post Office Tower.
******


Brief but Interesting Weather Update ...
This Monday (May 5th / Cinco de Mayo -- yuppie drinking holiday) day started out quite sunny but gradually clouds moved in -- until evening when a gloomy and winter gray-like cloud bank moved in from the northwest and it started to rain. It was a bit unusual for a "warm season" day (at least it seemed so to me -- and I don't mean to suggest we don't often get ominous skies when thunderstorms roll across the area in the summer time). 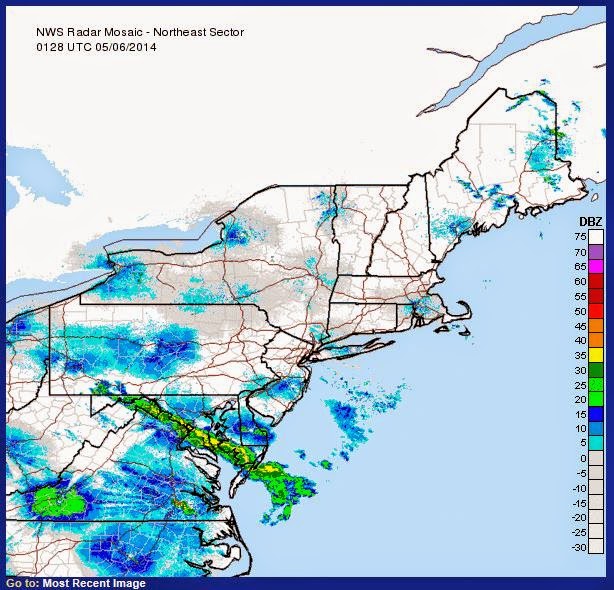 
The evening and night then featured some light to moderate rain showers and even a flash of cloud-to-cloud lightning and rumble of thunder around quarter to eight. There is a quasi-stationary frontal boundary across far southwestern Virginia and North Carolina and some sort of upper level favorable jet dynamics with isentropic lift ("upglide") that created an interesting persistent band of showers on a WNW to ENE trajectory right over the District -- resembling very much wintertime snow streamers off the Great Lakes, except rain and convective in nature. 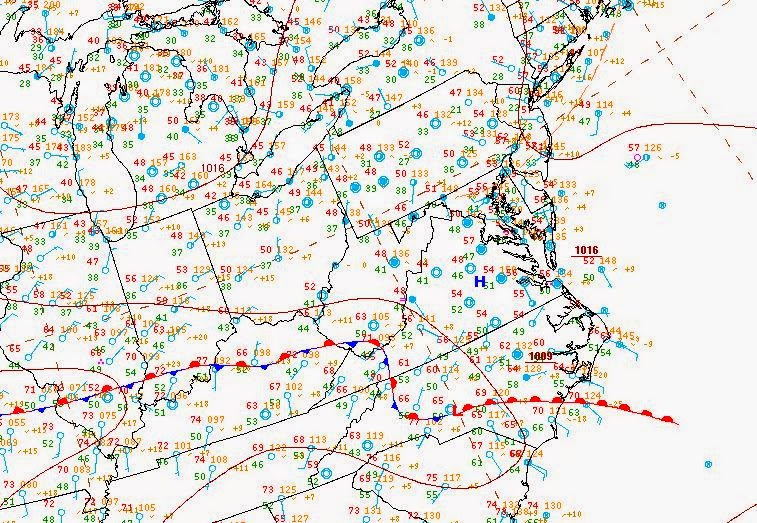 Portion of the NWS high-resolution surface map for parts of the Eastern U.S. and Appalachians / Ohio River Valley at 0300UTC (11PM EDT) May 6 (5th), 2014.  Click on map for larger version.
Rainfall such as tonight's in the D.C. area and into northern and central Virginia requires upper air charts at different levels -- vorticity, wind velocities and shear, instability parameters, heights / thicknesses, and relative humidity, among others. A surface map just won't cut it.
*******


In fact, it is still going on six hours later at the 1AM hour except the axis has shifted about 40 miles to the south. 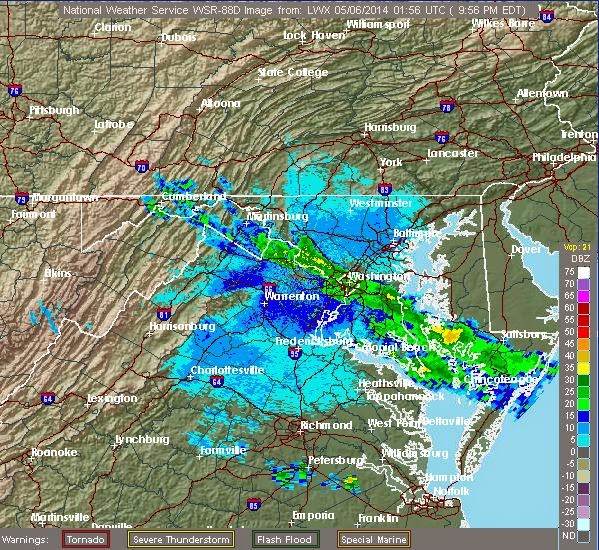 
Sterling LWX sort of caught onto this rainfall -- though it hardly played it up and even discounted any lightning and thunder in D.C. proper in the afternoon forecast discussion (from 2:48PM on Monday). It noted, though that the High-Resolution Rapid Refresh (HRRR) model captured the feature / precipitation quite well. 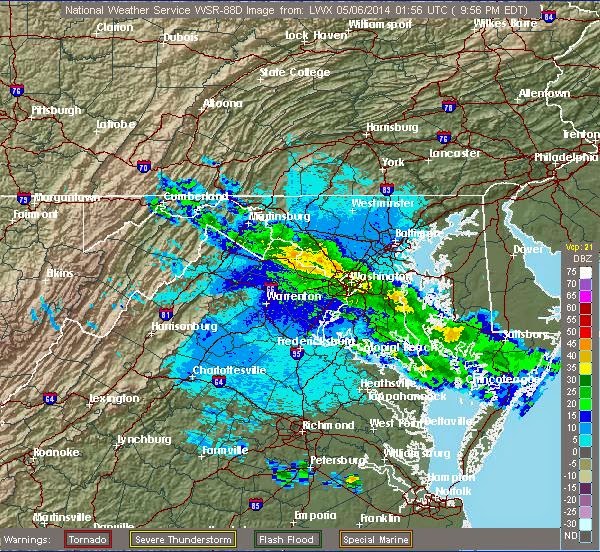 
The band of precipitation has shifted south with showers and thunderstorms over northern and central Virginia. It looks as though KDCA had the jackpot of precipitation through midnight (though Warrenton and Fredericksburg may end up with the most by morning). KDCA had 0.38 inches and KIAD had 0.23 inches while KBWI had trace and KDMH reported zero. 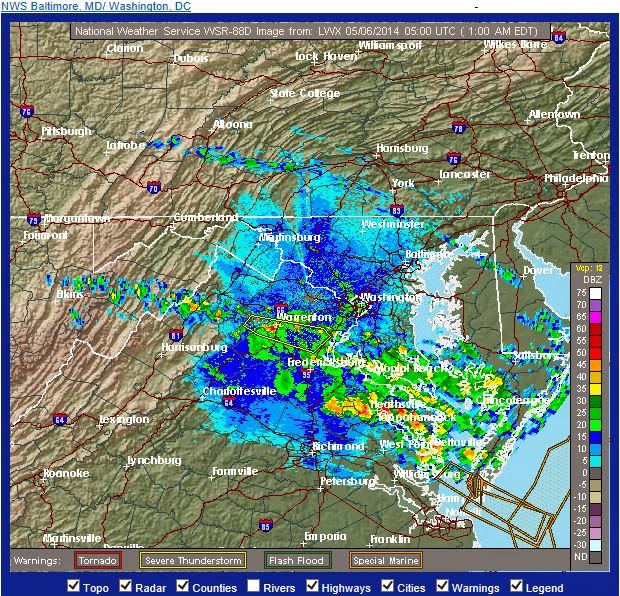 The Sterling LWX National Weather Service (NWS) radar in enhanced base mode reflectivity at 1:00AM EDT May 6, 2014 showing the showers and t-storms now south of D.C.
*******


OK, that's all for now. I had intended a longer entry with some political commentary and other stuff, but it's too late now. I had a good gym workout tonight (though I skipped the pool). I might not take the computer home tomorrow night so my next update would therefore not be until late Wednesday / early Thursday.
--Regulus