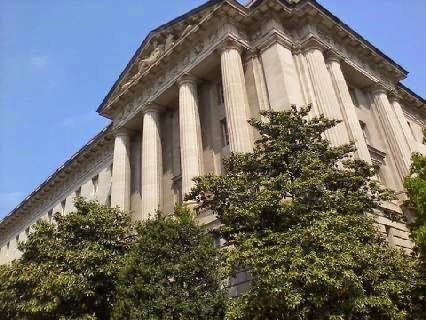 The William Jefferson Clinton Building as seen from the corner of 12th St. and Constitution Ave. NW, Washington, D.C., 11:08AM May 8, 2014. I was riding my bike to work yesterday.
I don't know why but it just annoys me that this lovely, ornate building -- which for 28-years had the name of Ariel Rios for the 28-year old ATF agent killed in the line of duty in 1982 (the building once housed ATF HQ) -- was renamed for President Clinton last year. My view is that buildings should be, for the most part, named for people posthumously.
*******


Chait and Krugman ...
For this entry, I am posting links to and excerpts of two outstanding columns by my present-day pundit-heroes of Paul Krugman and Jonathan Chait along with some additional and related information. 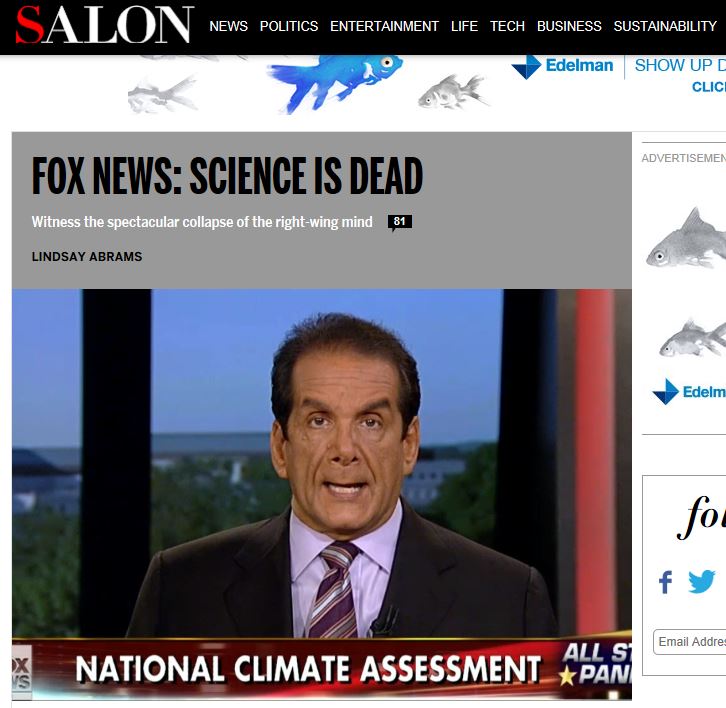 The ghoulish un-dead visage of Charles Krauthammer on a Fox News Channel "discussion" about climate change following release of the National Climate Assessment.
*******


It is an analysis of a Fox News Channel "All Star" panel earlier this week to "discuss" the findings of the National Climate Assessment that featured among others Charles "Dr. Chuckles" Krauthammer and George F. "That's Not His Wife" Will. The discussion was, as Chait put it, "a depressing, and even harrowing, study in the poisonous effects of dogma upon a once-healthy brain."
Aptly described by Salon writer Lindsay Abrams as an "epic take down" in her summary of it (which also included the screenshot image above), the piece has to be read in its entirety to appreciate it.
However, I will post the intro and the ending along with a couple key graphics included in it. Please read the column for the actual analysis. 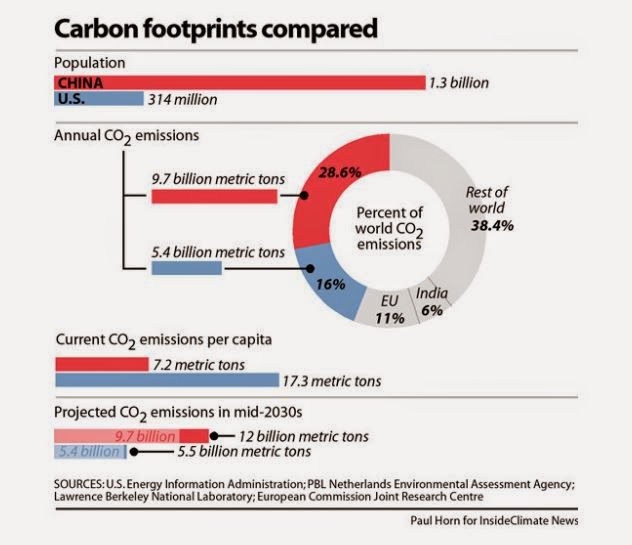 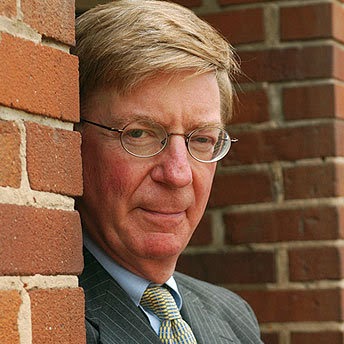 "There is no issue where educated ignorance is on more perfect display than watching the conservative movement confront scientific evidence of climate change. Educated ignorance is not the same thing as the regular kind of ignorance. It takes real talent to master.


"George F. Will and Charles Krauthammer are two of the intellectual giants of the right, former winners of the Bradley Foundation’s $250,000 annual prize, Washington Post columnists, and Fox News All-Star panelists. They numbered among the select conservative intellectuals chosen to dine with newly elected president Barack Obama in 2009.
"On their Fox News All-Star Panel appearance this week, both men discussed the U.S. National Climate Assessment, which they dismissed with various irritable mental gestures. Their evasions and misstatements, clothed in faux-erudition, offer a useful entrance point to study the current state of the right-wing mind..." 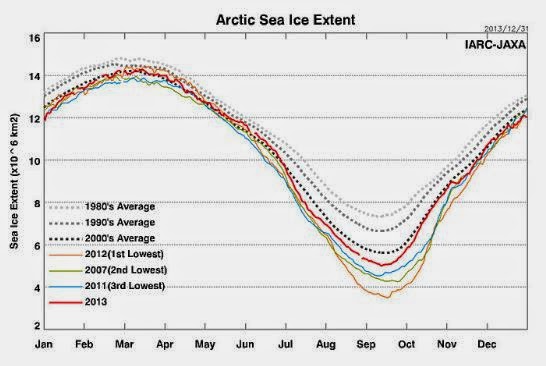 
"To watch Will and Krauthammer grasp for rationales to cast doubt on an established scientific field merely because its findings pose a challenge to their ideological priors is a depressing, and even harrowing, study in the poisonous effects of dogma upon a once-healthy brain. They have amassed an impressive array of sound bites and factoids, and can render them with convincing gravitas, and yet their underlying reasoning is absolutely bonkers. The analogy Krauthammer suggests of the rain man -- an authority figure possessed of commanding prestige despite lacking even rudimentary analytic powers -- turns out to be apt; only he is describing himself."
*******


UCS Study on U.S. Cable News Coverage of Climate Science in 2013 ...
On a related note, I sent the Chait piece to my friend Jeremy at the Union of Concerned Scientists (UCS) and he sent me the link to a UCS study released last month analyzing cable news coverage of climate science on Fox, CNN, and MSNBC for the year 2013. 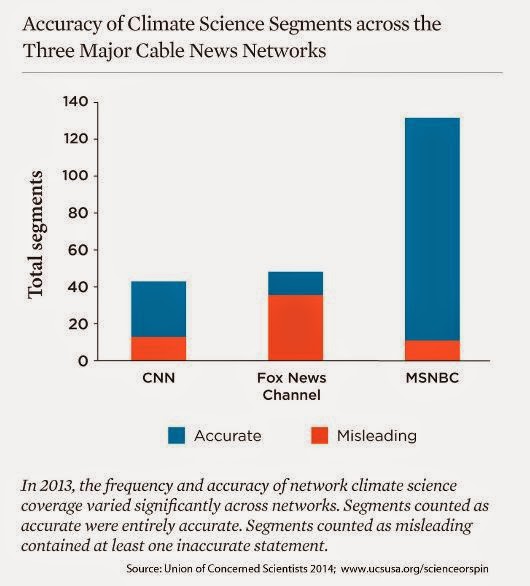 
There is a webpage featuring a summary of findings and the actual 12-page report (link embedded) Science or Spin?: Assessing the Accuracy of Cable News Coverage of Climate Science.
Not surprisingly, Fox News fared by far the worst with misleading statements / misinformation 72 percent of the time in the 50 times it covered climate science in 2013 versus only 7 percent in 2012 in the 40 times it covered climate science that year. 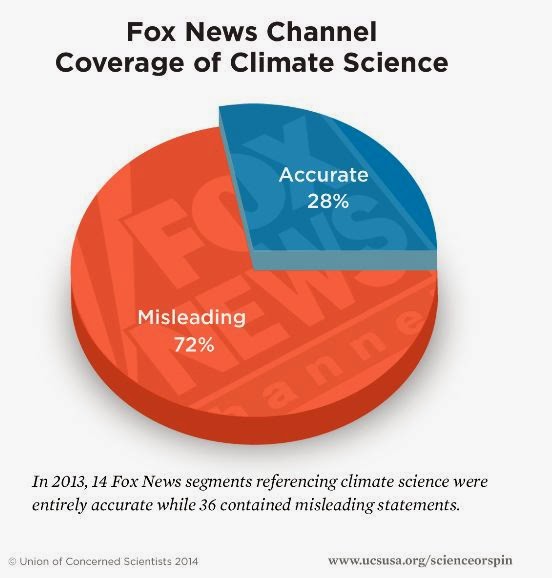 Pie chart of Fox News Channel accurate-versus-misleading coverage of climate science in 2013 -- UCS study.
What this means is that there were 14 times in which Fox News' coverage was "entirely accurate" in 2013 -- which is actually a lot higher than I would have thought. In addition, the 2013 coverage on Fox News Channel was actually an improvement over 2012 when it featured misleading statements / misinformation 93 percent of the time in the 40 times it covered climate science that year.
*******


For CNN, the study found that of the 43 times it covered climate science 43 times in 2013, 70 percent were entirely accurate, while 30 percent included misleading portrayals of the science... 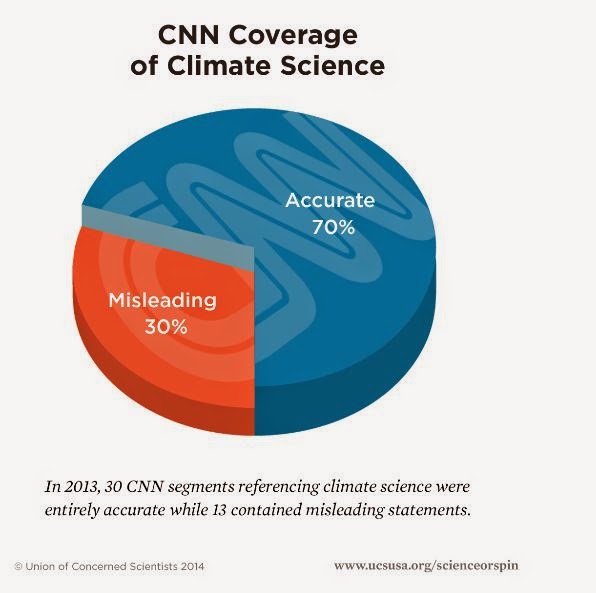 
For MSNBC, the study found that of the 132 times it covered climate science in 2013, 92 percent were entirely accurate, while 8 percent included misleading portrayals of the science. The MSNBC inaccuracies were primarily overstatements rather than the kind of mocking derision and misstatements that characterize Fox News coverage (in particular on a show called "The Five" that I'm happy to say I've never seen). 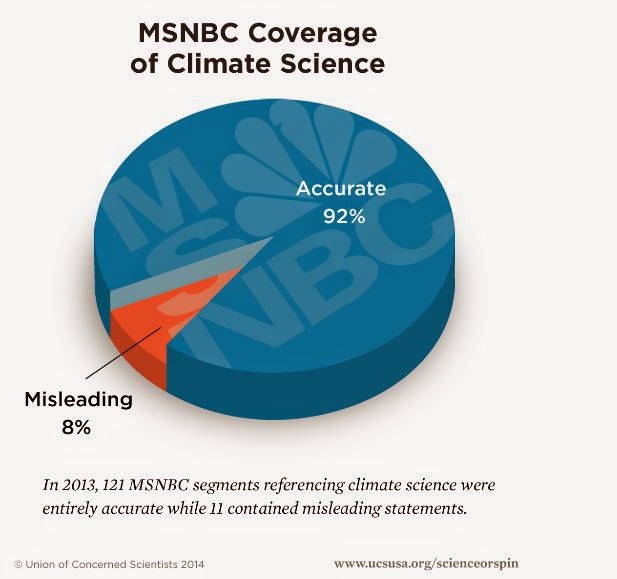 
By the way, Jeremy is doing some really good -- and important -- work at UCS involving his home state of West Virginia.
******* 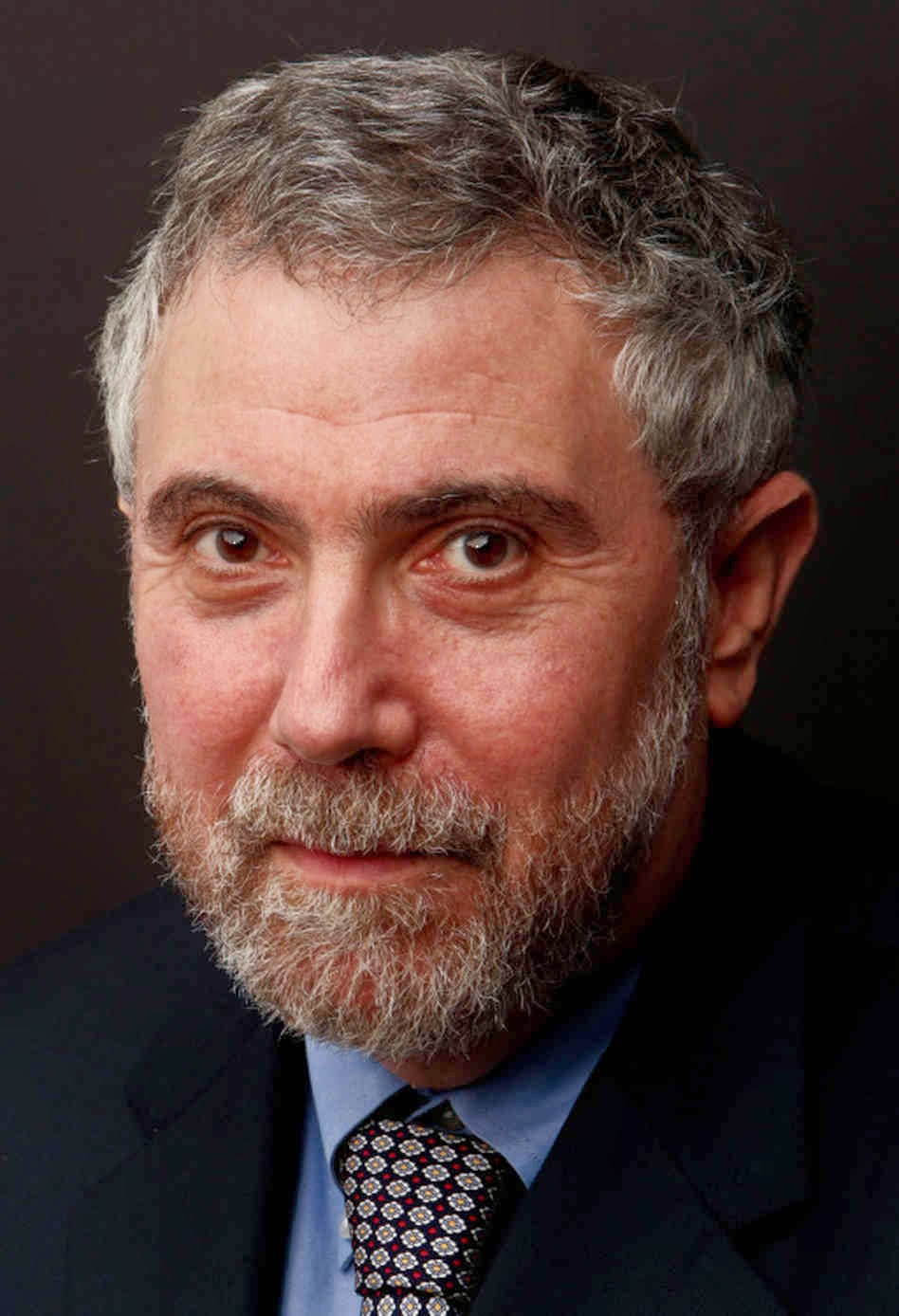 As for Professor Krugman, his Friday New York Times op-ed piece is also a must-must read one. The piece (link embedded) is: Now That's Rich.

The piece first notes a new survey showing that the highest 25 paid hedge fund earners -- all men -- made a collective $21 billion in income in 2013, which is double what all the kindergarten teachers in America earned that year.

Best line in the piece:


"First, modern inequality isn't about graduates. It's about oligarchs."
That is, when we talk about income inequality, we are talking about the top 0.01 percent, not the top 5 percent as corporate / foundation-funded think tank apologists conflate and confuse the issue.
Exacerbating this situation is an issue that he discussed on his blog on Thursday in an entry (link embedded) "Three Charts on Secular Stagnation" that refers to long-term (secular) economic stagnation -- which threatens to exacerbate the American shift toward oligarchy. (The three charts are included in this entry.) 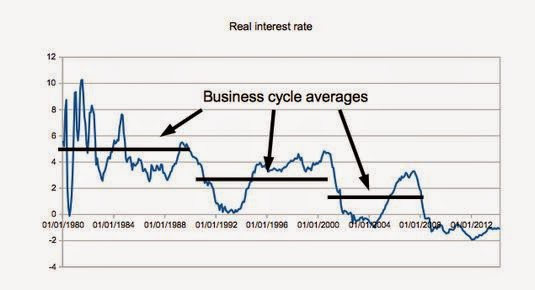 
In brief, our liquidity trap conditions now seems to be the new normal with monetary traction increasingly difficult even before the 2008 crash. Even when the deleveraging shock due to the burst mortgage bubble has ended, he writes, "stabilizing household debt relative to GDP would involve spending almost 4 percent of GDP less than during the 2001-7 business cycle." 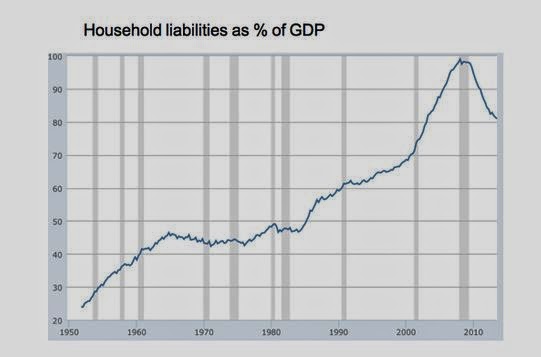 
Finally, demographic changes are likely to reduce the growth of potential output (this is an even more serious issue for countries such as Japan and Germany and, eventually, China). 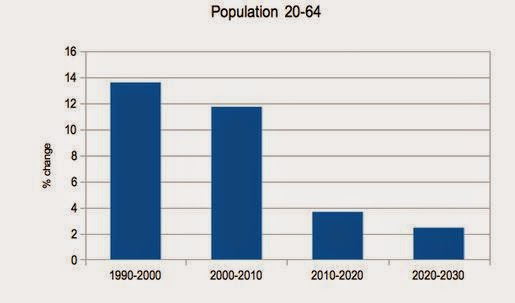 
Of course, I suppose you could argue that from an ecological economics point of view, endless growth is not only not desirable but not even possible, but that's a whole other topic for another time. 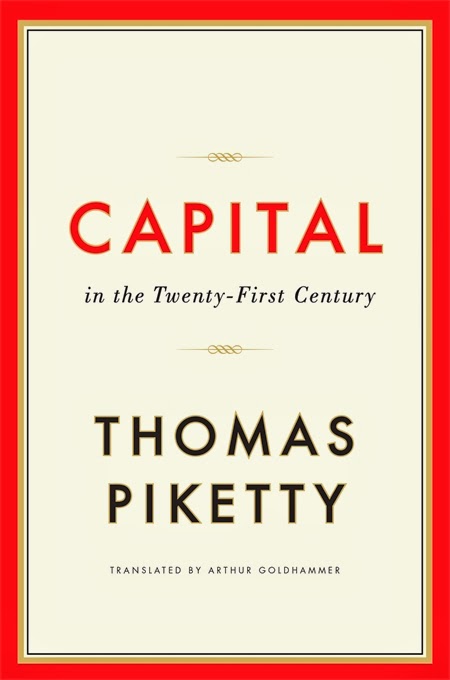 The issue of income inequality plays directly into the central finding of Thomas Piketty's seminal new work Capital in the Twenty-First Century, namely, that inherited wealth will only tend to grow over time at the expense of the rest of society.

The key insight (sort of the E=mc^2 version of the economics sphere) is that "r" (the rate of return on assets) has over the long sweep of history exceeded "g" (the rate of economic growth) so that r-g>0 with the result that wealth will tend to accumulate through inheritance. Here is Prof. Krugman's March 14, 2014 blog entry on the matter. 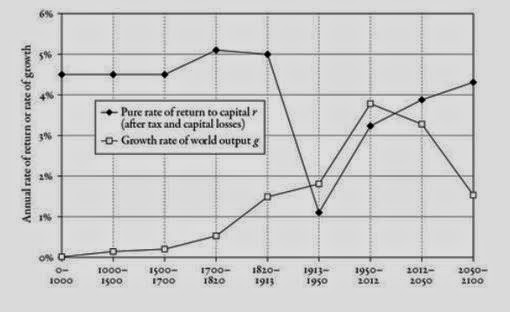 Chart showing the annual rate of return "r" on assets versus growth rate of world output from AD1 through the present and projected to AD2100. Obviously, the period prior to 1700 contain sweeping estimates.
*******


The 20th Century truly was an aberration from this norm -- and so America of the mid-21st Century will really have more in common with the late 19th Century Gilded Age (if it doesn't already).
We need to trot out the Washington Consensus Crowd to help us "make sense" of all of this. You know: Fred Hiatt to give the sober and "unbiased" neoliberal received wisdom; Benji Wittes to explain American Empire and the need for more wars and drones; Sebastian Mallaby to explain the joys of working class-destroying Free Trade Agreements for giant multinationals; Ruth "Mother" Marcus to give all-wrong-information on everything; and Ron Fournier to find that "bipartisan" point that perfectly splits the difference between Dems and Repubs.
--Regulus
Posted by Regulus at 9:31 PM