At the Start of an Uncertain Work Week, A Few Images of Niagara Falls on a Bitterly Cold Day and the Jersey Shore on a Lovely Summer Day 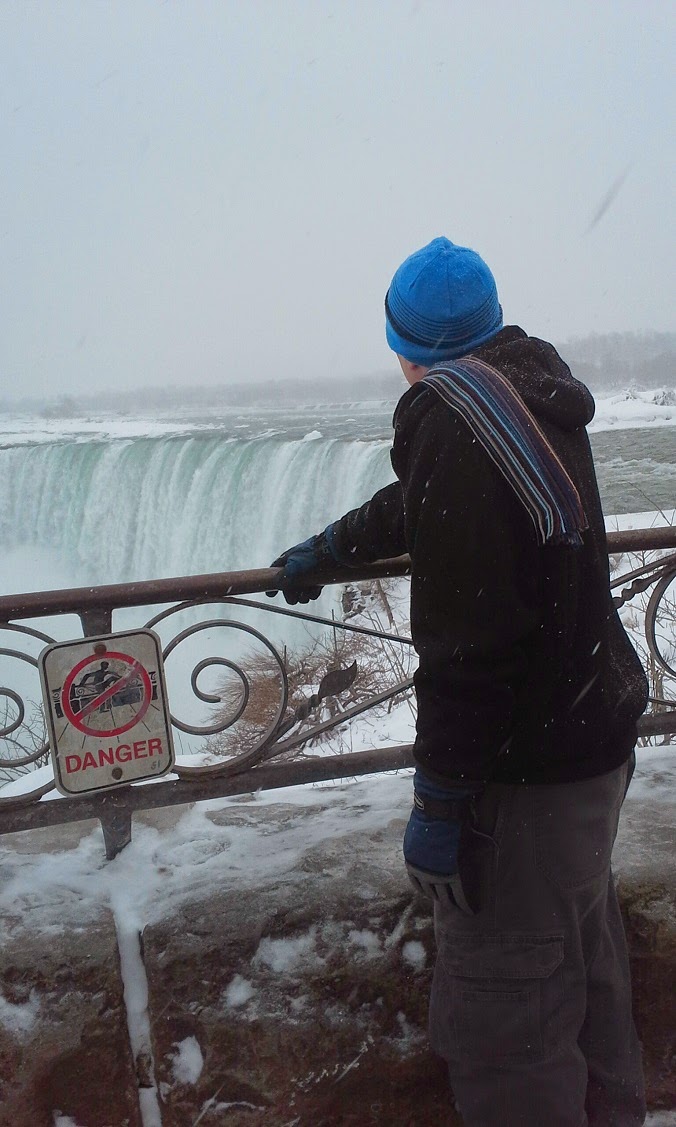 Yours truly at the edge of ice-filled but still roaring Niagara Falls on the Canadian side on a flippin' cold day with scattered snow showers, 1:51PM January 26, 2014. Those "partially frozen" with the water resembling an icy slushy drink Niagara Falls were still thunderously roaring.
The power of Niagara. Indeed.


By way of explanation: This entry contains two pictures associated with twin batches of photographs from the two trips I went on -- Wildwood at the Jersey shore last August and Buffalo / Niagara Falls this past January -- that I never posted. Also, these two trips caused some folks (in particular my nutty father, whose entire life since 1993 has been a vacation) to think all I do is go on vacations. That is so not the case. I'm in the D.C. Bubble about 99.5 percent of my life. Both trips were with Gary.
******* 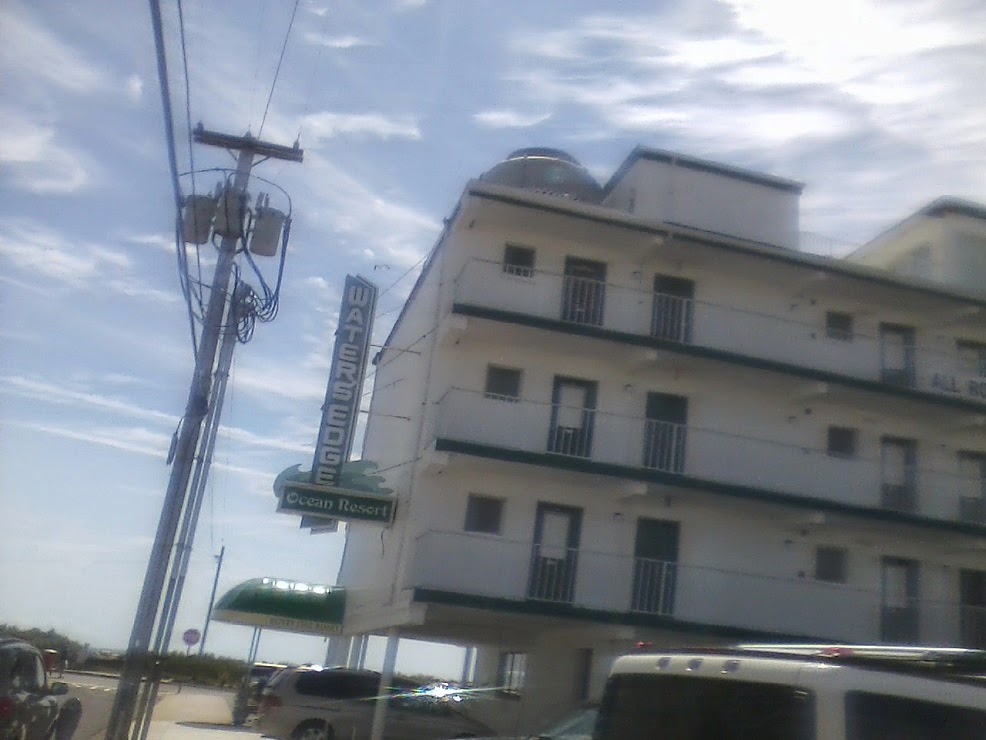 The Water's Edge Ocean Resort Hotel, Wildwood Crest, N.J., 11:47AM August 25, 2013. I'm not sure why -- probably because of the misty salty sea air -- but my camera lens was all blurry, although it does make an interesting impressionistic feel.
*******


As for the here and now, another work week starts. Things are quite uncertain at work as we head into the summer time, but I'll refrain from details on this. I am worried though and hope the work I've been doing can continue.
The weekend itself was mostly kind of crappy featuring the usual stuff -- mediocre to crummy bars jaunts, attempted and abbreviated bike ride on Sunday, one good gym day, as ever, getting stood up by Gary because a better offer came along for him.*
As I said, the usual. 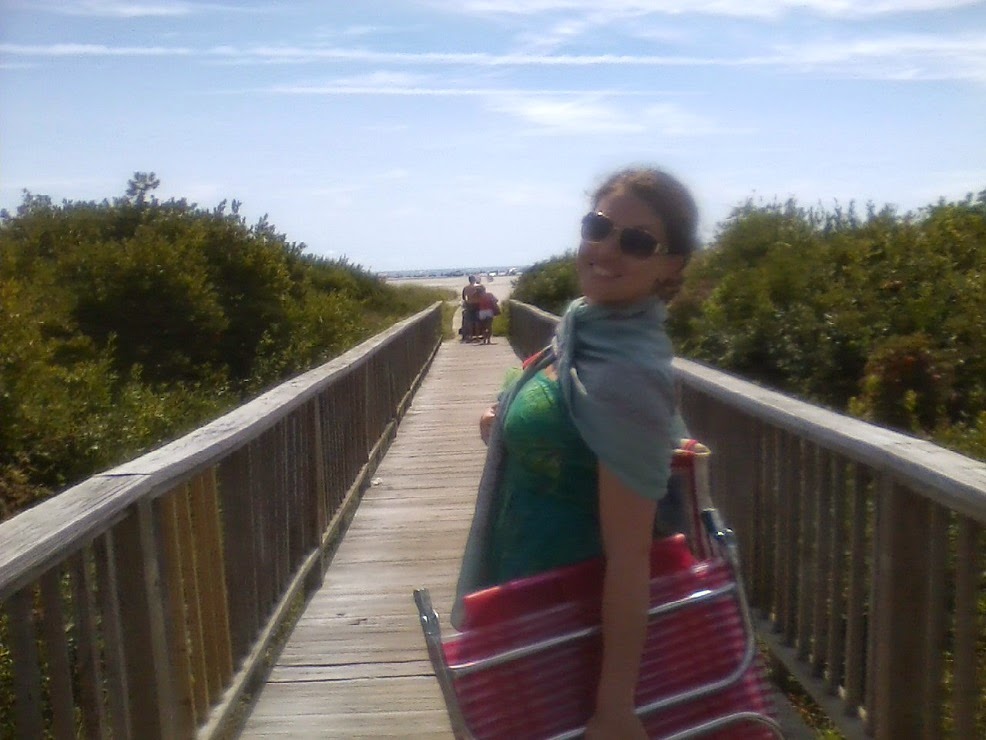 Wendy stops to smile as we walk along one of the extended wooden walkways to the vast beach at Wildwood Crest, N.J., 11:48AM August 25, 2013. The Atlantic Ocean is visible in the distance shimmering in the sunshine of a summer's day.
These beaches are at least several hundred feet wide (and the sand away from the ocean far too hot to sit on, at least for me). Wildwood and Wildwood Crest (and presumably North Wildwood) are also places in New Jersey where one does not have to pay to go on the beach.
*******


*Of course, if I were Gary and a better offer came along, I would not spend time with me either. I was more upset about it last night then now on a Monday morning.
Also, we are now getting deeper into the "warm season" as we make our climb into the interminable hot and humid summers of D.C., and that depresses me -- except for the prospect of a late August trip to my native Jersey shore. 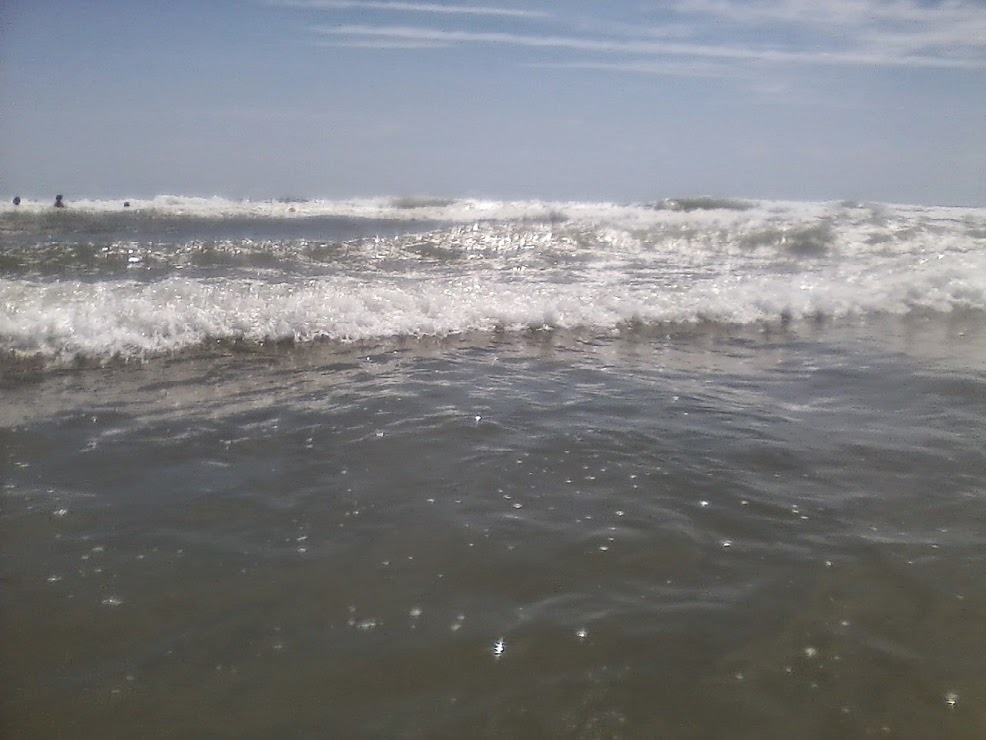 The lightly roiled summer surf of the Atlantic Ocean, Wildwood Crest, N.J., 12:04PM August 25, 2013.
These kinds of images are among my favorite of my summer vacations to the Jersey shore.
*******

I'll try to update the blog tonight after work and gym, but I also want and need to be in bed by 1AM at the latest.
--Regulus
Posted by Regulus at 9:32 AM