*With apologies to Maria Muldaur. 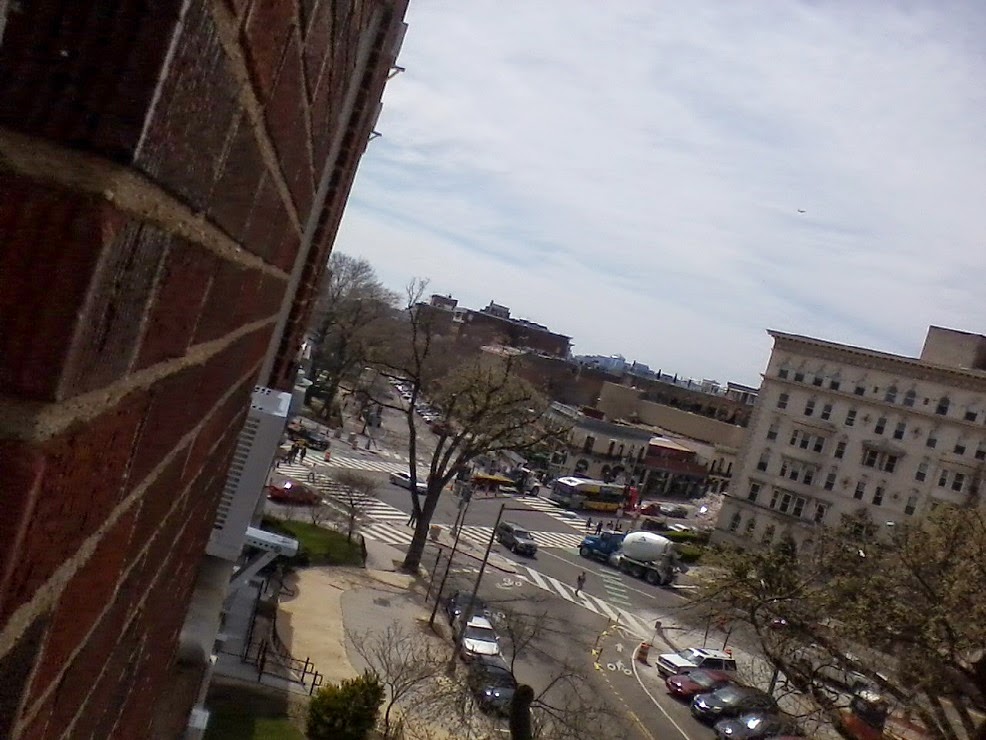 
It's a mostly sunny, mild day with temperatures near 60F under a cirrus and cirrostratus (and jet condensation trail)-fleeced light blue sky and a gusty northwesterly breeze. 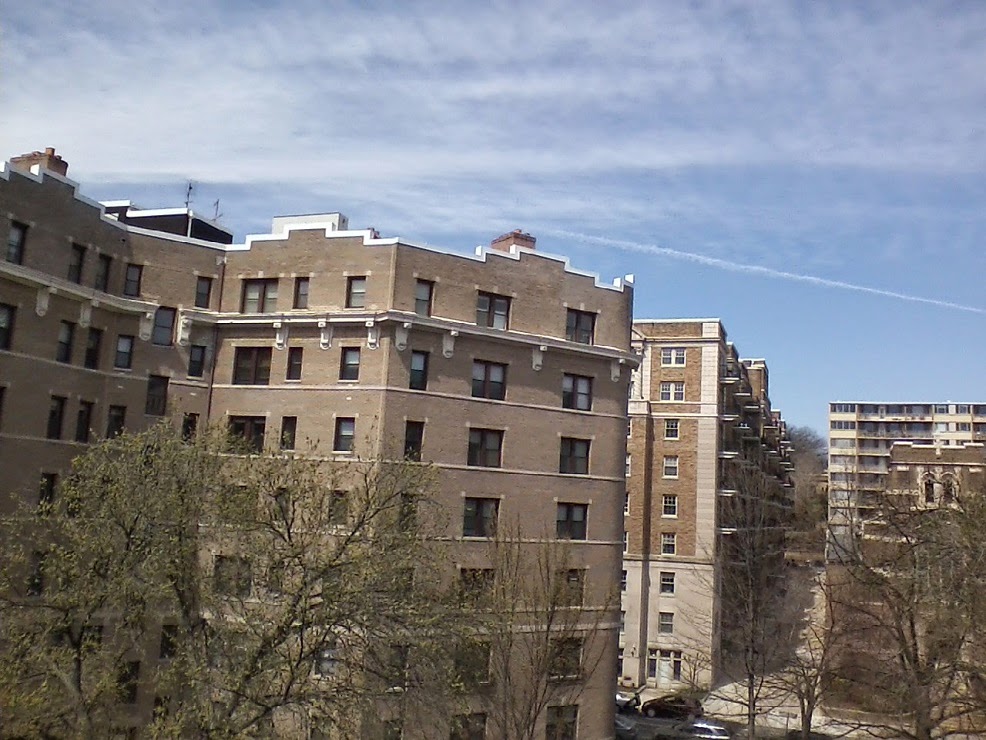 The view from my apartment kitchen window looking to the north and northwest past nearby residential condo buildings toward Meridian Hill Park, Washington, D.C., 1:45PM April 5, 2014.
*******


We had a brief showery spell last night but less than 0.1" of rain fell. We really haven't had anything since the two to three inch rainfall last weekend that also included a brief burst of snow (and, no, I never did post the final KDCA, KBWI, and KIAD airport precip. numbers for the event or for March). We're still approximately normal for precipitation so far this year. 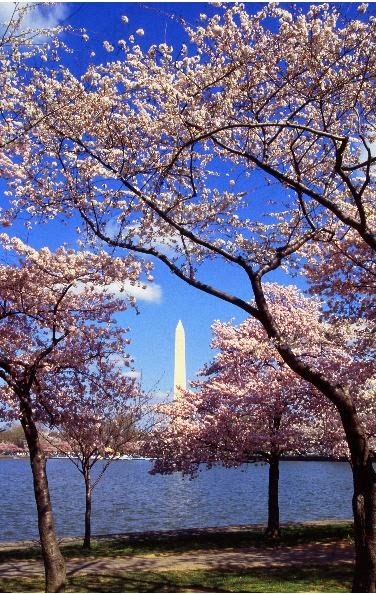 The trees are starting to bloom here in D.C. proper, mostly the flowering ones, though the signature Yoshino "Japanese" cherries have yet to blossom (see stock picture at left).

The city is suddenly infested overrun with tourists, most notably American Red State-supersized and clueless and/or annoying foreign ones. It's always the worst on the Metro and in Metro stations, in particular on the escalators.


So this entry is just a quick update to say that I'll try to post a jukebox Saturday night entry tonight and a fuller entry tomorrow. It just hasn't been a good past five days to blog.
In the meantime, I am going to the gym around 4PM today for a planned full workout (i.e., 1 hour/ six mile jog, nearly one hour of machine-based light-to-moderate weightlifting, and a 20 to 30 minute swim).
I really should go to the gym both today and tomorrow, or alternatively, tomorrow and Monday. I ate too much late last night -- a large steak dinner with potato wedges and sautéed spinach at Old Ebbitt Grill. I went there with a long-time on-and-off again friend, Craig M. 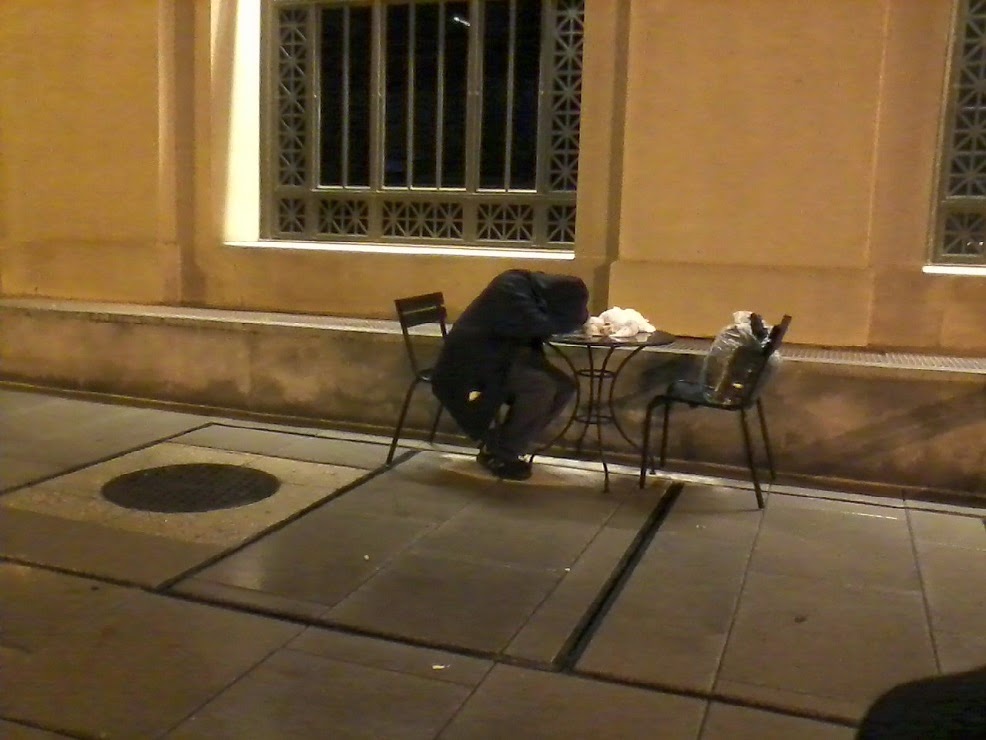 Homeless man asleep at an outdoor table in the 1400 block of G Street NW not far from the White House and Old Ebbitt Grill, Washington, D.C., 11:42PM April 4, 2014.
Craig had just parked and we were talking to the restaurant. It was raining at that point. To adapt Voltaire's Candide, I explained to Craig from First Principles why this is The Best of All Possible Libertarian Bullsh!t and American Fundie Protestant Calvinist Worlds. This includes that uniquely American obscene ideological specialty of why that man CHOSE among an INFINITY OF GOD-GIVEN CHOICES to be homeless and living in a gutter. I was actually going to tell the homeless man himself but, alas, he was gone by the time we came back.
*******


Actually, we had a nice time, though not before one minor verbal spat. We met at No. 9 around 1045PM and then headed over in his pickup truck to OEG. He had just seen one of those ubiquitous plays he sees (something at the Studio Theatre called "Water by the Spoonful" that was, he said, profoundly depressing). Craig had actually invited me but, aside from the fact I almost never go to the theatre or the cinema (see below for more on that). 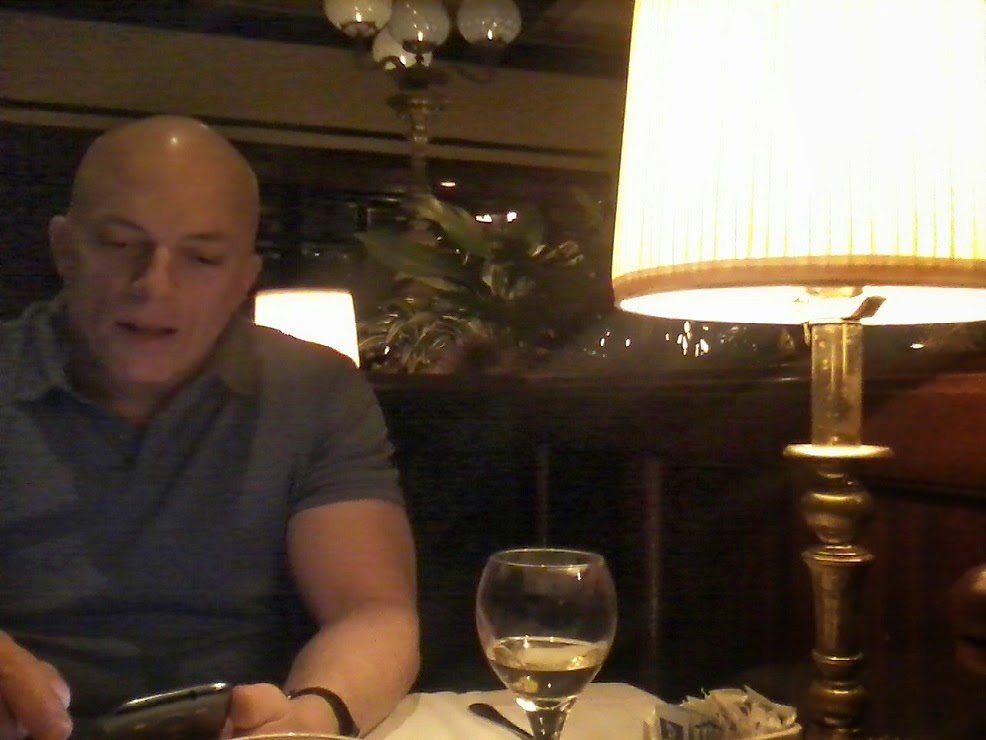 Craig with me last night at Old Ebbitt Grill, Washington, D.C., 1:00AM April 5, 2014.
Craig was looking up on his Android the YouTube clip of this two-legged boxer dog named Duncan Lou Who running with glee on a beach in Washington state (after the necessary amputation of his two hind legs). (Craig is about as big a dog person as you will find.)
******* 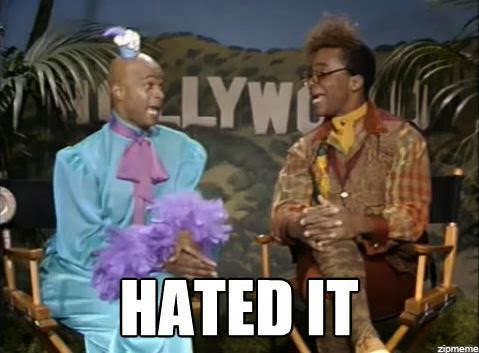 Perhaps I should take M. WADE Tipamillyun's Dumbass Class of the Film to learn about cinematic greatness.
However, I could not have gone even if I had wanted to because I was still at work until 8PM on a Friday night. 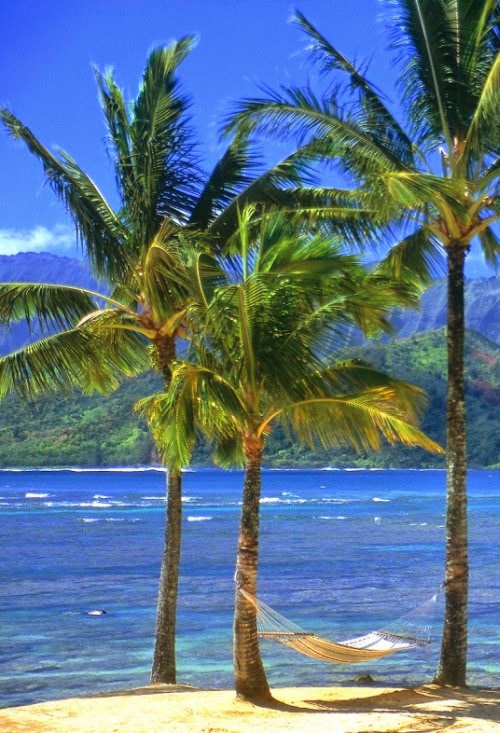 I was at work until 8PM on a Friday night because the Hawaii project is entering its frenzied finale. We are almost at concurrence and the actual public publication of this ginormous report. I was in a reference / citation mania all day (another two dozen or so that had to be resolved and confirmed with PDF copies of which procured in one of the major chapters).

My brain felt fried and I was in a bad mood, still quite annoyed about yesterday's dinner blow-off by you-know-who. It wasn't even the blow-off -- the reason was more than a legitimate one -- but to be told "Give me an hour" (to get back to me) and, well, I'm still waiting almost 48 hours later. I never treat people like that. But that's part and parcel of the gay world. 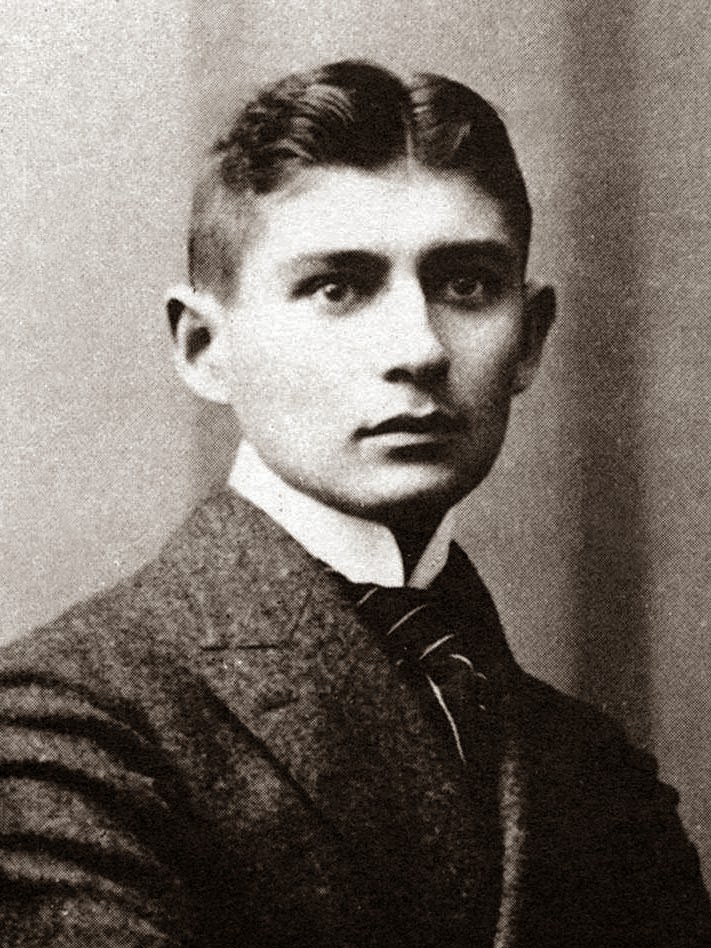 From above: That's not to say I never watch ANY films. As it is, I am trying to gear myself to write a few short stories. I have some ideas. They will be of a vaguely Kafkaesque sort, as disturbed and cerebral but updated to our current early 21st Century American urban / suburban purgatory.


At least that's my idea. I'm sure in the end, I won't do jack-sh!t, and instead just stay a nobody nothing man in a nowhere time.
Anyway, we went to Old Ebbitt Grill and for the THIRD flippin' time I've taken someone there, the Old Bar is too goddamn crowded to find two bar stools next to each other, this time at 11:30PM no less. In fact, the main part of the restaurant was much more open, so instead we had table service. 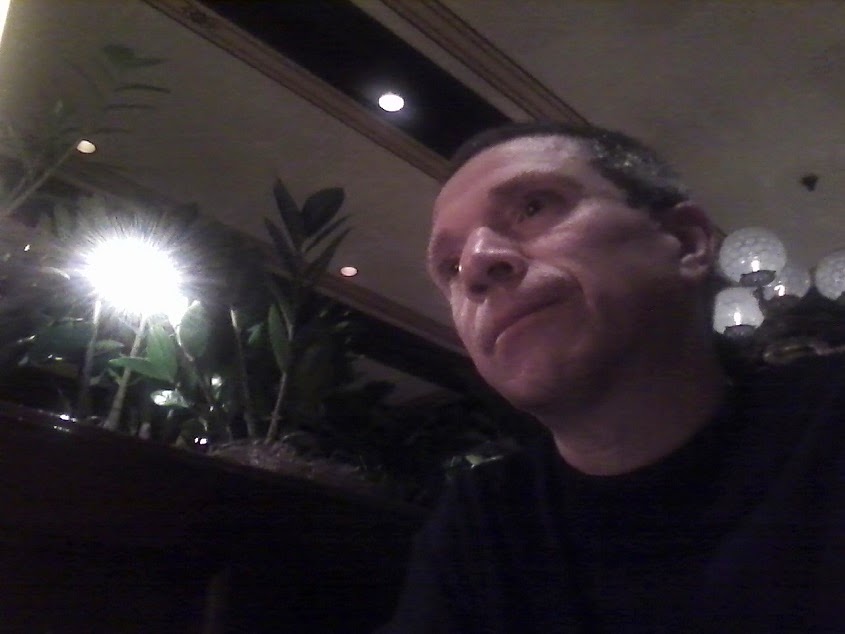 
Everything was fine except for one verbal disagreement -- over a topic and about a person that I just don't even flippin' want to mention yet again -- but that actually set the stage for a very good and pleasant talk that was invigorating and, yes, (and I apologize for the use of this word on this blog) even motivational (though, if anything, in a Gnostic sort of way). However, when I told him about my Hawaii referencing work, he nearly fell asleep at the table.
Oh, yes, it turns out our parents have had NO CLUE, much less interest, in the kind of work we do (Craig also works for a Federal agency, although he is actually a civil servant) even after years. 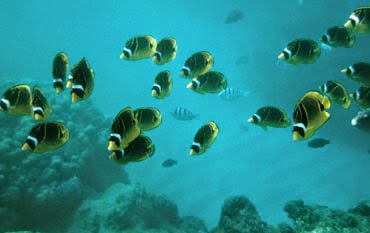 Craig drove me home by about quarter to 2AM. I texted him just before 3AM as I went to bed asking if he got home. He replied around 9AM this morning with a message that I think is worth posting:
"Yup, got home fine. Good to see you, Richard. Keep the faith; Life is good."
--Regulus
Posted by Regulus at 2:54 PM