Another 48 Hours in Washington, D.C. -OR- Springtime in the Capital of the Empire: The Continuing Series 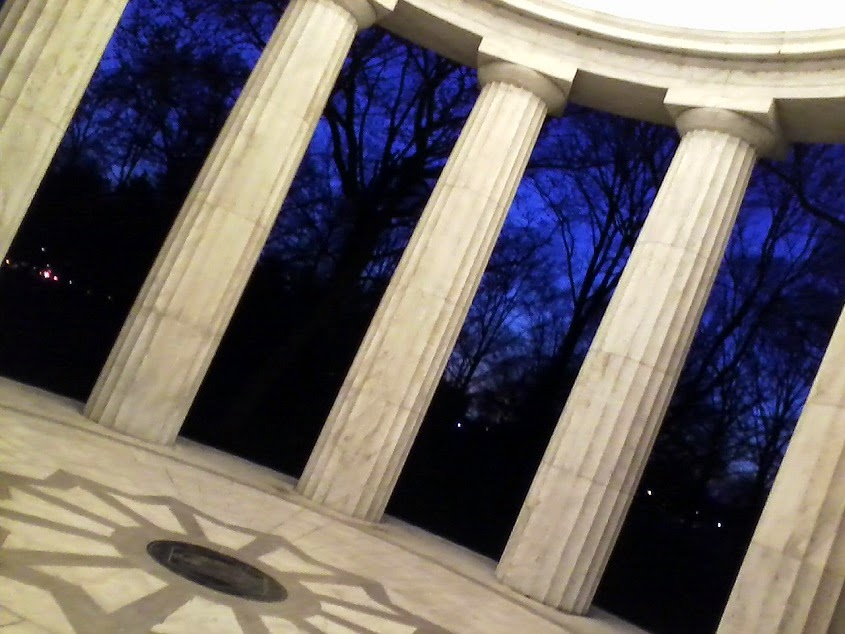 The interior-lit columns of the District of Columbia War Memorial as seen in the last light of dusk, 8:09pm April 10, 2014.
This little memorial is located between the Reflecting Pool and Tidal Basin on the National Mall, Washington, D.C., as seen at dusk, 8:09PM April 10, 2014.This memorial commemorates the residents of the District of Columbia who served in World War I. Don't confuse it with giant World War II Memorial.
*******


Sorry for lack of updates ... The last 48 hours have been very unusual in terms of work / sleep / socializing schedule.
This included working 12 hours continuously from 11PM to 11AM Wednesday into yesterday (the ginormous Hawaii report is just about finished and ready to go public soon). 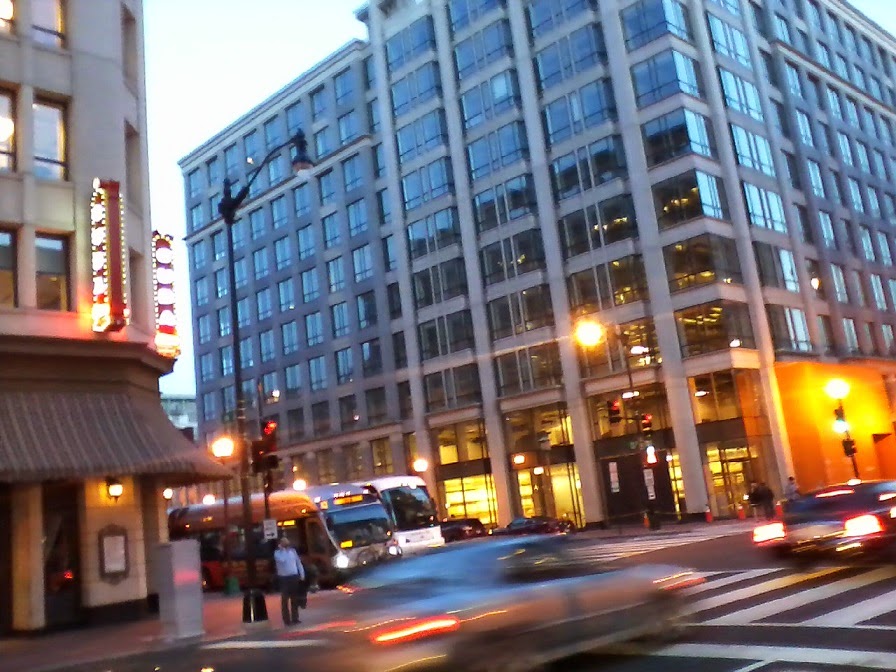 
I then managed to get 3 hours of daytime sleep yesterday afternoon. Thereafter, I got ready and biked over via the rush-hour clogged streets of D.C. to Cuba Libre, where I had a pleasant two-hour happy hour with Andrea and Imara. 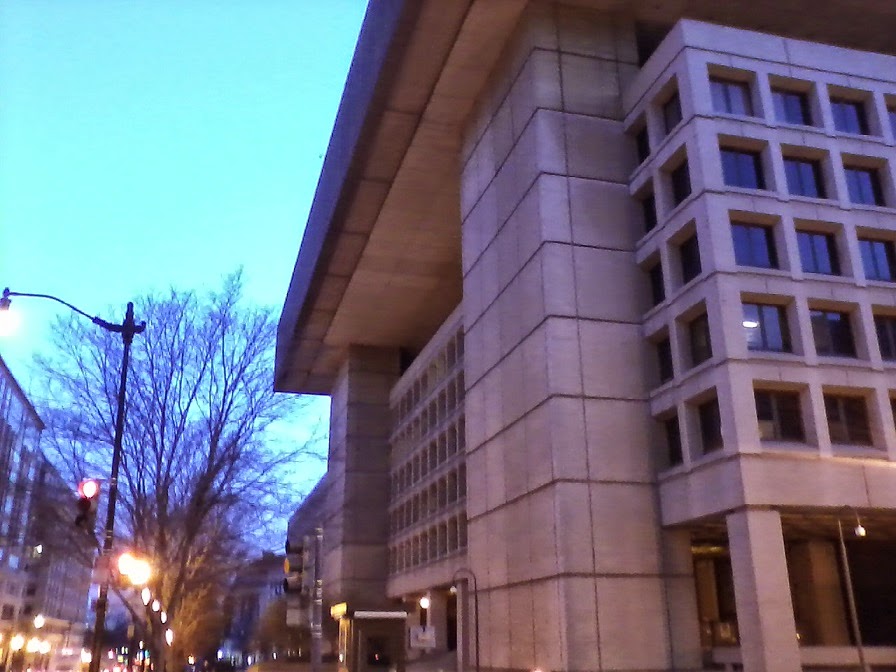 The J. Edgar Hoover Building, Washington, D.C., 7:50PM April 10, 2014.
This is without doubt THE ugliest major building in the entire District of Columbia -- and not just architecturally (although the Martin Luther King Jr. D.C. Public Library Building / homeless shelter comes close), now that the Third Church of Christ, Scientist building has been demolished and the old Watha T. Daniel D.C. Public Library Buildings has been replaced. But it is clearly the ugliest for the mindset it represents. Of course, that mindset has flourished big time in the ever-metastasizing post-9/11 American military / surveillance / security state. The late J. Edgar Hoover (R - Red Dress) would be proud. As for the building, it basically has a dry moat around it. The FBI should fill it with water and alligators.
*******


Thereafter around 745PM I headed on my bike down to the tourist-clogged National Mall. The Yoshino cherry blossoms are at peak -- 'nuff said. I was careful biking in the presence of so many tourists including their small children. 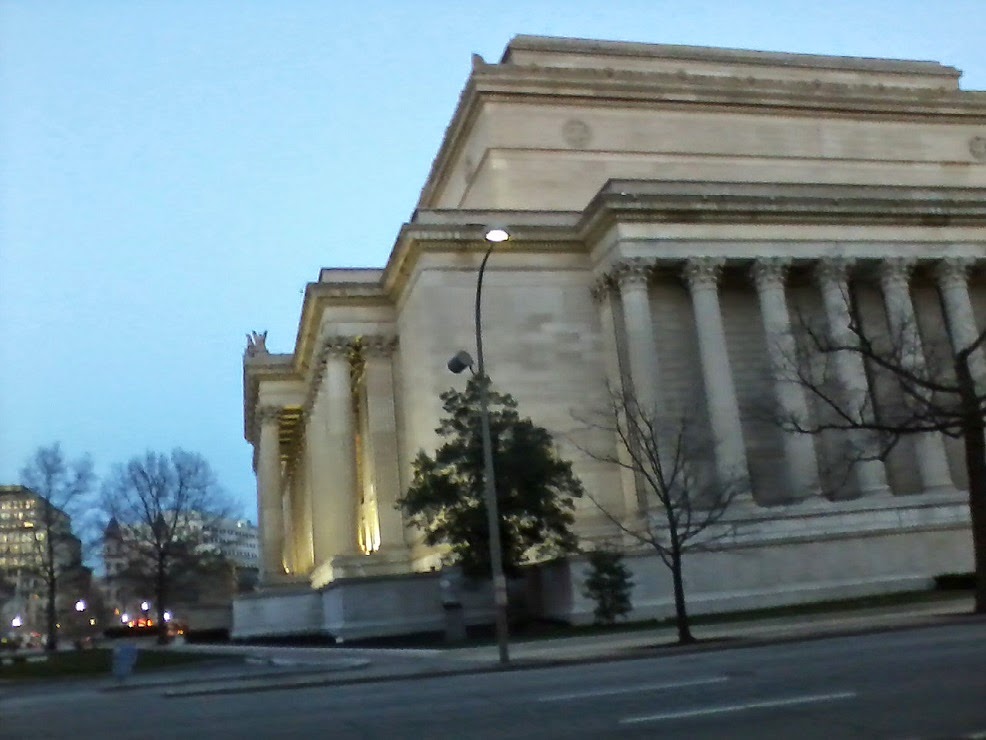 
I continued over to Washington Harbour in Georgetown where I stopped at the NOT mobbed outdoor bar belonging to Sequoia's (a name has all five regular vowels in it). It was a lovely evening with a mild breeze coming off the ALMOST NOT smelly Potomac and the shifting patterns of brilliant stars low in the southern sky beyond Theodore Roosevelt Island that were created by the inbound jets on the upriver approach into National Airport low in the southern sky. 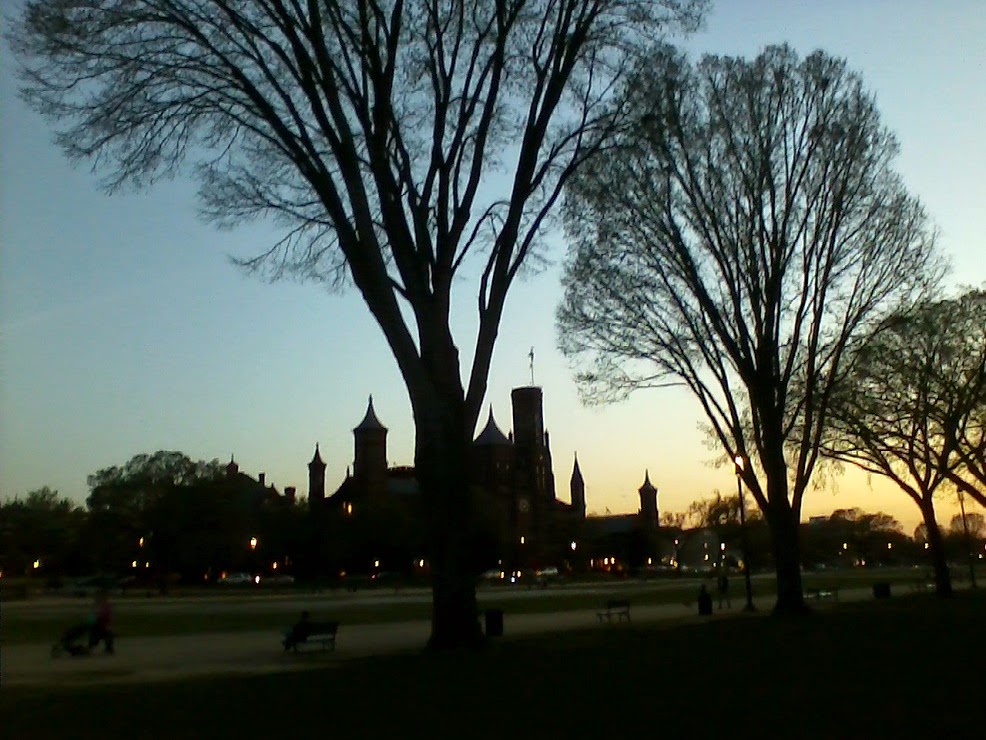 
I then biked back to Dupont Circle via the nighttime side streets of Georgetown. I went to Larry's Lounge where I met Gary and Kristof. I was very happy when Chris H. showed up with Brady the Adorable Puggle, and I got to spend some time with that little dog I love so much. He's such a wonderful dog. Finally, I got home and just slept in this morning. 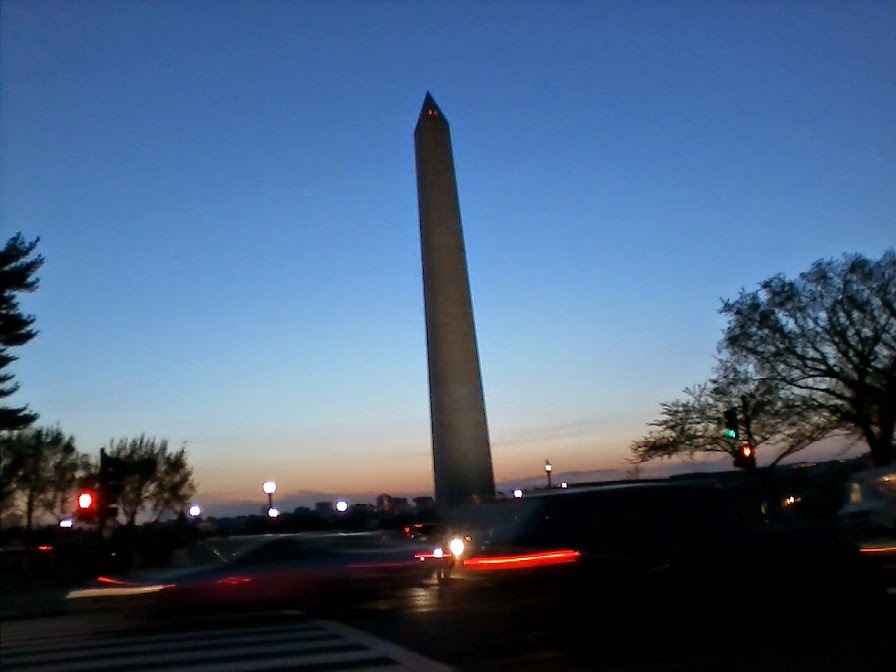 
I'm trying to get back to a normal schedule, at least normal by my standards, which are already about 3 to 4 hours offset from the rest of the world. I'm heading into the office in a little while and tonight I want / need to go to the gym. I'll try to update this blog later tonight or tomorrow.
-Regulus
Posted by Regulus at 12:36 PM