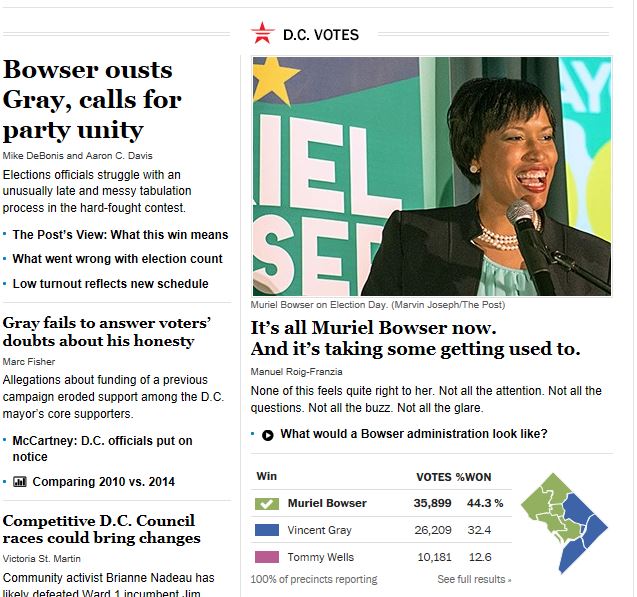 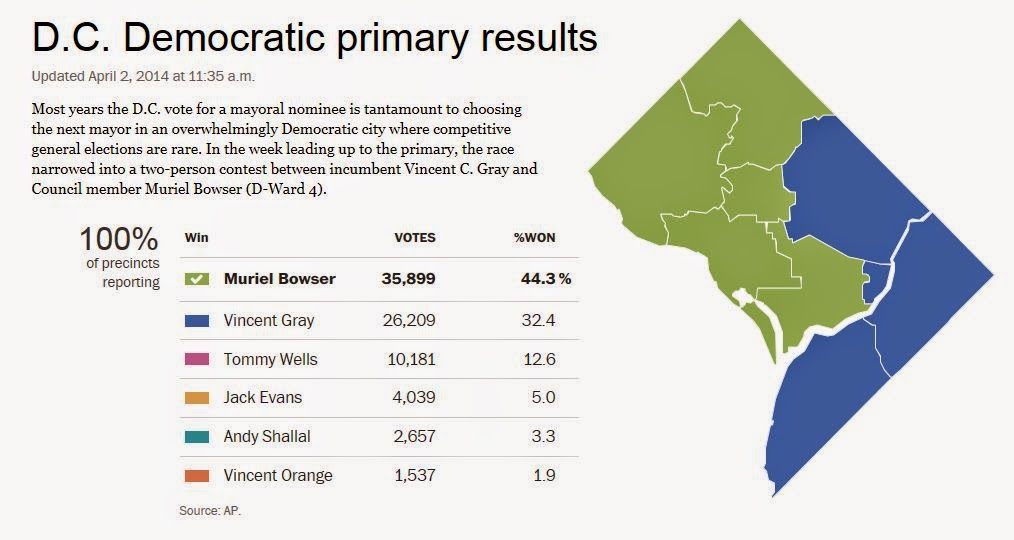 Click on image for larger / more readily version.
Tommy "Unicorns and Rainbows" Wells placed third with 12.6 percent of the vote (10,181 votes).
Turnout was, of course, very low, which makes Bowser's sizable victory in a crowded field against an incumbent all the more noteworthy.
Updated 12:56AM 4/4/2014:


The following information comes from this WaHoPo website and this one.
While Bowser defeated Gray by 9,690 votes -- but she won by fewer votes than what Adrian Fenty received when he lost in 2010 to Gray. As for Gray, his defeat was ensured by a vote total that dropped by nearly 28,000 in his Ward 7 and Ward 8 strongholds. 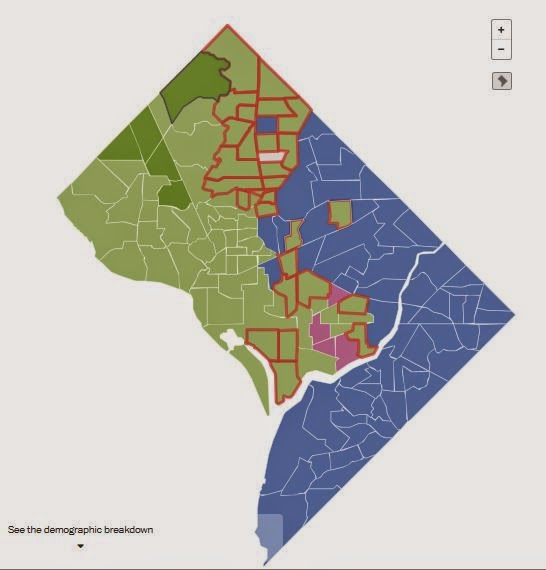 Above is a more detailed map of the vote showing the eight wards and the precinct within them shaded to reveal the size of the victory of the respective candidates. The red-highlighted precincts are considered "swing" ones in that Gray won them in 2010 but lost in 2014.
Tommy Wells carried four precincts in Ward 6 (which he represents). Meanwhile, in Ward 4 / Precinct 55, the vote total was exactly tied between Bowser and Gray. It is the gray-shaded precinct (no pun intended) toward the northern apex of the city.
Jack Evans and Vincent Orange, two long-time D.C. pols, fared very poorly with 5.0 and 1.9 percent of the overall vote, respectively. Andy Shallal (Eatonville!) garnered 3.3 percent. The other candidates -- Reta Lewis and Carlos Allen -- split most of the remaining vote. (I suppose there were some write-ins and such.)
I live in Ward 1 / Precinct 22. The respective Ward-wide and precinct-specific results were as follows: 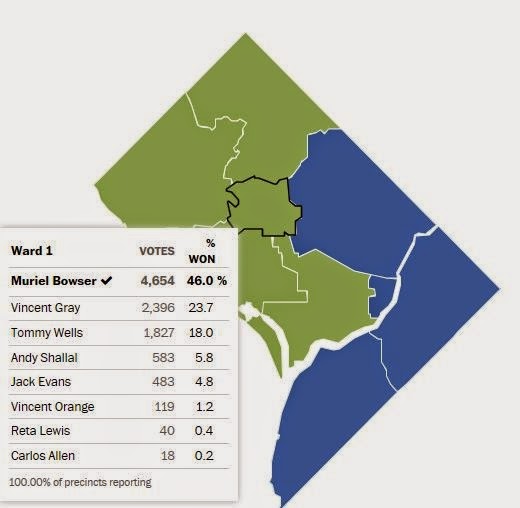 There were 10,120 votes cast for the official Democratic candidates (again, not counting any write-ins or voters who chose nobody) with Bowser beating Gray 46.0 percent to 23.7 percent with 4,654 to 2,396, respectively.
In Precinct 22 (circled in yellow), the results were as follows: 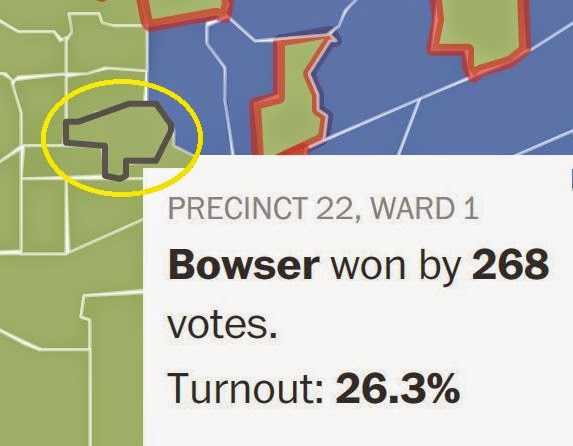 
Overall District-wide turnout was pegged at just 22.5 percent compared to 37.1 percent four years ago in the comparable D.C. mayoral primary. 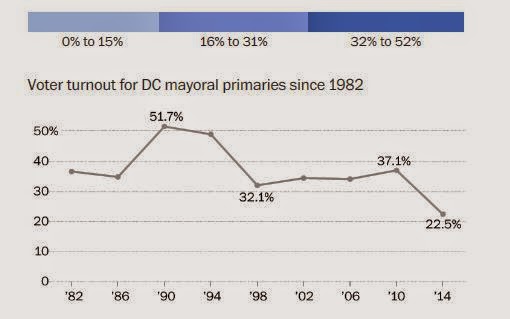 A chart showing turnout in the mayoral primaries back to 1982. (I think this is the total turnout and not just the Democratic primary, although of course that represents the overwhelming bulk of the primary vote.)
End of update.


This outcome also means that Muriel Bowser is almost certain to become mayor -- I don't see how David Catania can now win.
As for me, I voted for Bowser in the primary (not sure what I'll do in the general election), along with all these other "down ballot" people for this or that committee, virtually none of whom I had any idea who they are. I voted outside the school -- Garnet-Patterson Middle School -- where not even two months ago I had to duck bullets.
Welcome to Washington, D.C.: A Capital City!
So I guess I'll have to get used to Mayor Bowser. Of note, her name reminds me of the plastic inflatable pink rabbit I had as a small child in New Jersey because it was named Blouser (or maybe he spelled it "Blowser" but pronounced it "BLAU-ser"). My dad wrote a song to him once that he used to sing in the shower.
Anyway, I'm not feeling very well today (hence I'm home at this late morning hour). However, I intend to go into work in an hour or so. Tonight, I am not taking the computer home so no blogging. My next update likely won't be until late Thursday / early Friday.
--Regulus
Posted by Regulus at 12:08 PM