A River and Blog Entry Runs Through It -OR- April in Washington, D.C., and In My Life 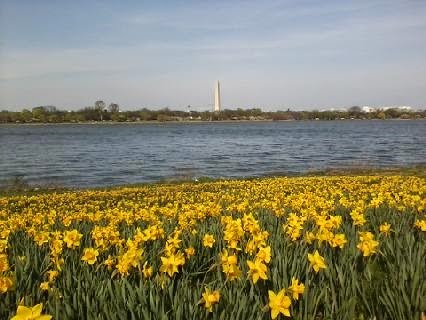 Daffodils grow in happy profusion along the southern banks of the Potomac River in Arlington, Virginia with the Washington Monument visible in the distance, 4:41PM April 13, 2014.
It was a very warm April day -- the warmest of the season so far with temperatures reaching the low-to-mid 80s Fahrenheit. As for me, long story short, I inadvertently and foolishly got stuck in a sea of humanity around the cherry blossoms, but at the point I took the photo, I was biking toward Rosslyn on the Virginia side (see pictures).
*******


So I had intended a longer blog entry but it is already nearly 1230AM as I start this one. I went to the gym tonight after work and had a full workout. I came home, made dinner, and FINALLY folded my laundry even as I watch TV. It has been sitting in a large plastic bin on my floor in my little apartment through three weekly wash loads.

Quite annoying.
Right now, I'm flipping between an old rerun of The Golden Girls and an almost brand new episode of Hot In Cleveland. Though the episodes are separated by 27 years, the awesome Betty White is on both shows.
It's too bad I don't have more time to write tonight since there are a number of items I would like to relate. This includes a weather update; information on the impending publication of the big Hawaii report on which I've spent so much time the past month and the past 6 to 9 months**; and some links to Michael Lind, Jonathan Chait, and Paul Krugman pieces that I've read, as well as a must-read one by the great Thomas "What's the Matter With Kansas?" Frank. 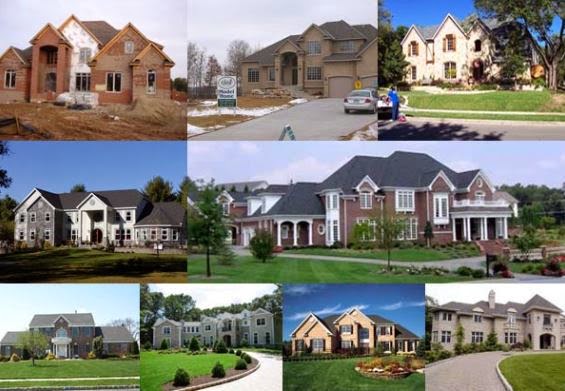 The Frank piece is (link embedded): Let them eat McMansions! The 1 percent, income inequality, and new-fashioned American excess I was considering posting the entire piece (and may still do so in a subsequent entry).
**As for the big Hawaii report, I do want to note that I really have to be careful how I reference this it. This report is likely to get a significant amount of attention in the Hawaiian Islands and I do not want to show up on search engines for this. As a result, I necessarily had to edit six entries from July 2013 to remove any mention of the type of report or its general topic. 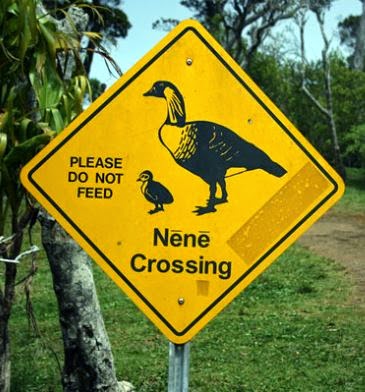 I did NOT note these edits in these six entries but they include the following:


Once the report has been announced in the Federal Register notice later this week and is posted on the DOE, EPA, and Hawaiian agency websites, I will link to it -- but obliquely. Again, my concern is that because this report will attract a sizable amount of attention in the Hawaiian Islands, and because my name is in it (once in a back-end appendix), I could have it linked directly to this blog, which I do not want to do. (The report is already available on one website but is not yet being touted.) 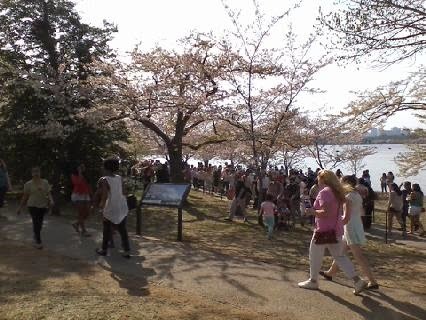 Throngs visit the Yoshino cherry blossom trees that grow near the Jefferson Memorial, Washington, D.C., 4:32PM April 13, 2014. The blossoms were swiftly falling at this point.
I'm not even going to relate how I got stuck down there -- and with my bicycle no less. But in the end, I managed to ride on the pedestrian / biker walkway over the George Mason Memorial Bridge span of the 14th Street Bridge en route to Rosslyn where I met Andrea and her friend Renee visiting from Delaware. We went to the Quarterdeck restaurant.
*******


As for the weather, a stormy day is expected on Tuesday with sharply colder temperatures and a chance of some snowflakes mixed in as the rain ends (although that is unlikely in the immediate D.C. area) as a vigorous complex story system pushes by with a powerful attendant cold front sweeping across the Eastern Seaboard. There is even a freeze warning in effect for Wednesday morning and one will likely be issued for Thursday morning with lows 25F to 30F. 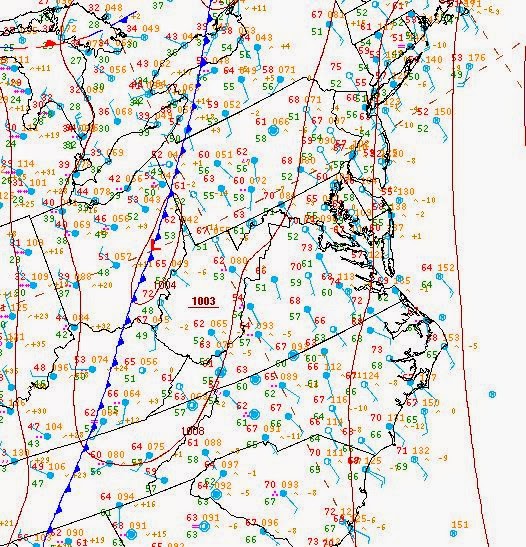 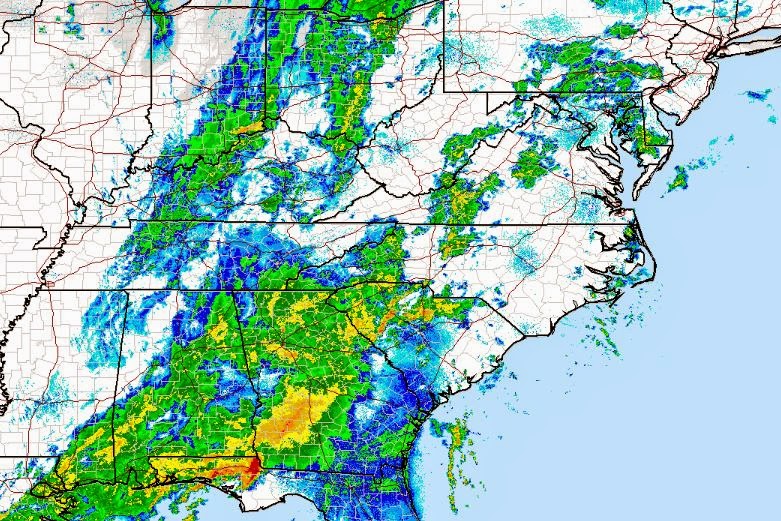 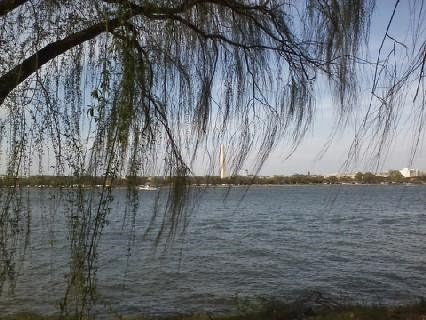 A still-bare willow tree grows along the Potomac River on the Arlington, Virginia side with the Washington Monument visible on the other side, 4:46PM April 13, 2014.
*******


It is a soaking wet morning across the entire extended Washington / Baltimore region with heavy a broad swath of heavy rainfall marching across the piedmont and coastal plain with a powerful cold front. 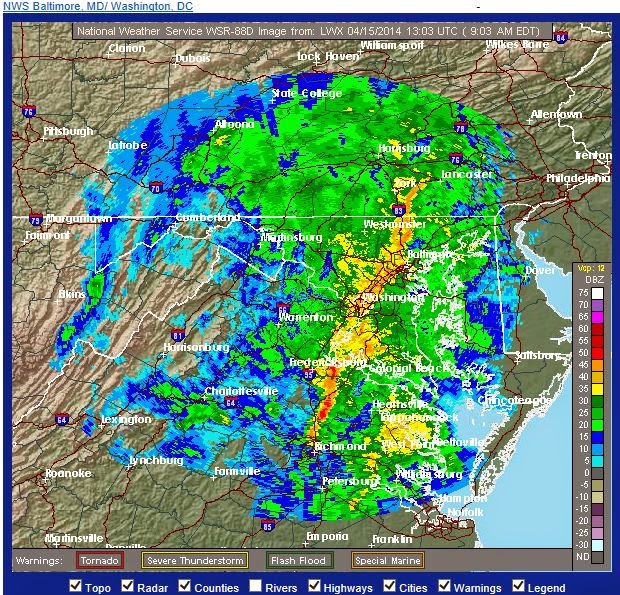 
As for the arrival of that much colder air for a few days, a freeze warning is in effect for much of the Sterling (LWX) county warning area tonight including the District of Columbia and Baltimore City proper and points east and south where the growing season as already started either climatologically or this year. 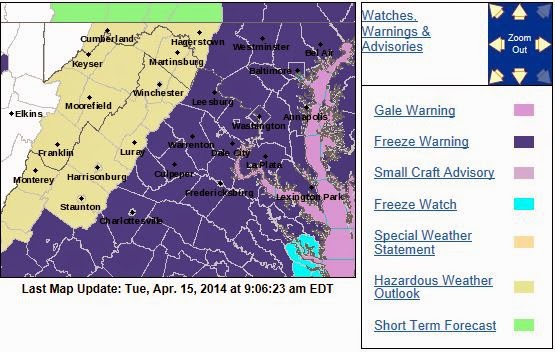 The LWX CWA NWS advisories in effect as of 9:06AM April 15, 2014. The purplish-blue colors represent freeze warnings for late tonight into tomorrow morning.
Of note, I do not really like the revamped NWS forecast office websites including the Sterling one.
*******


More broadly, the various NWS forecast offices have put out freezing warnings that collectively cover a very large swath of the Lower 48. This is shown by the map below: 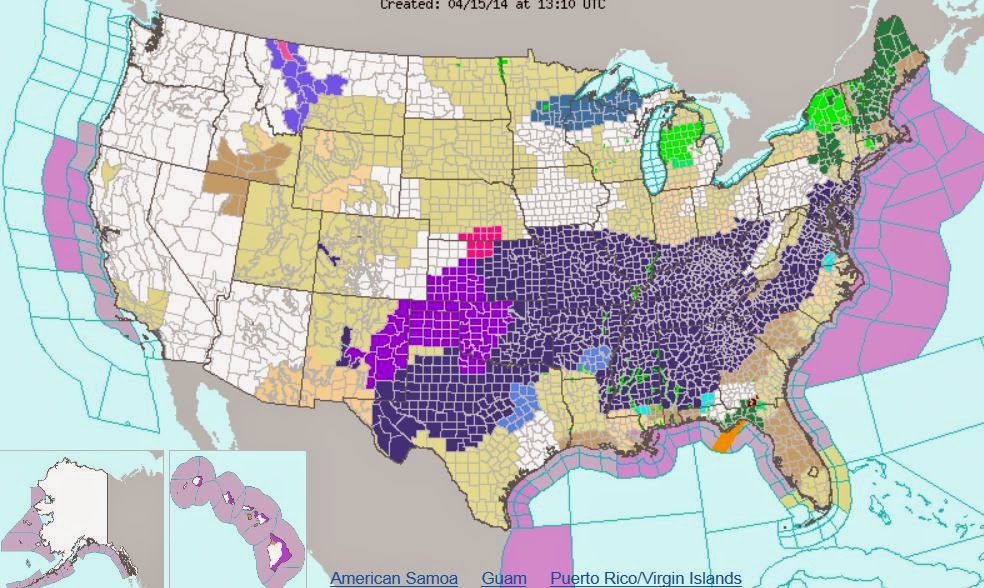 Weather advisories in place as of 1310UTC (9:10AM EDT) across the United States. This map shows how extensive are the freeze warnings from Texas to the southern Iowa border to New Jersey  to southern Alabama including all of Tennessee, Kentucky, and Delaware and nearly all of Missouri. Click on map for larger version.
End of Update.


OK, that's all for now. Apologies for the truncated entry (though I really don't think anyone will notice). My next planned update might not be until Wednesday or Thursday night, i.e., early Thursday or early Friday, though possibly sooner.
--Regulus
Posted by Regulus at 2:36 AM