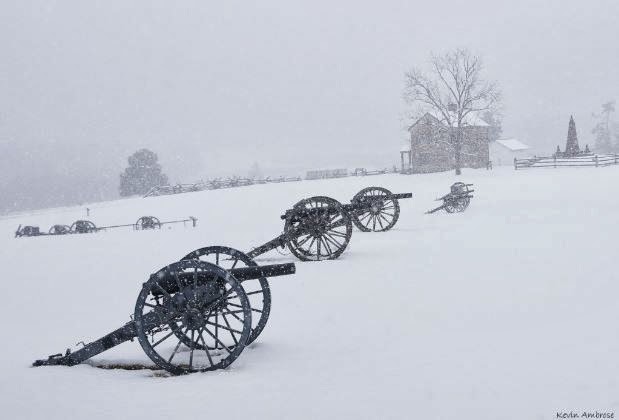 Henry House Hill, Manassas National Battlefield, Virginia in the late season snow yesterday, March 25, 2014.
Why are there so many Henry's associated with the Colonial and Civil War eras??
The above picture was taken by Kevin Ambrose and posted in this Capital Weather Gang entry that features some really lovely images from yesterday's snow both at the battlefield park and in D.C, with the latter ones  taken by Ian Livingston. 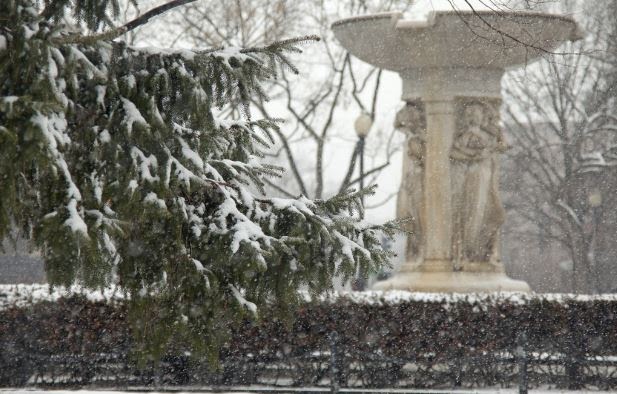 Dupont Circle with its central fountain in the snow yesterday, March 25, 2014. This picture was taken by Ian Livingston and posted in the same CWG entry linked above.
*******


This is a brief after-work update as I am not taking the computer home tonight (for the second night in a row). I'm not going to the gym (I'll go tomorrow) but instead I'm taking Kristof to dinner at Dupont Italian Kitchen downstairs (where Chris is working). It's Kristof's birthday. I think he's 21 for the 26th time. Right.
My workday was a rather busy both with the Hawaii project (it's almost finished, at least this phase of it) and my compliance case work. 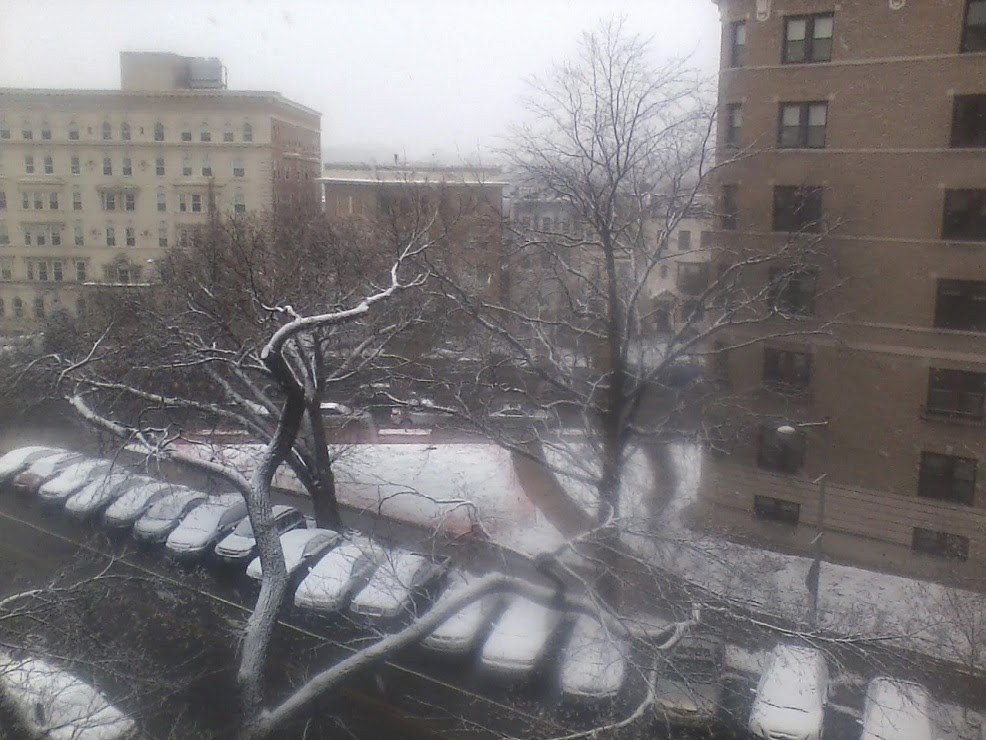 Yes, once again another view from my apartment this season on a snowy day -- this one taken at 9:44MA March 25, 2014. This is probably the last such snowy scene image for the season from my apartment kitchen window. Aren't ya happy??
*******


As for taking the computer home, it is also too also to tote it around. This winter has really not wanted to give up, although it is supposed to warm up in the next few days with temps around 60F by Friday. It also looks like a wet Friday into Saturday on tap. 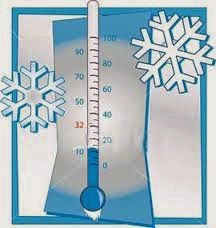 Today, preliminarily, it reached only 39F at Reagan National Airport (KDCA) and 36F at BWI Thurgood Marshall Airport (KBWI) while Washington Dulles Int'l Airport (KIAD) barely broke freezing at 33F. (I think that's a record low max, surpassing the 35F in 1971.) Tonight will be rather cold with lows around 22F. 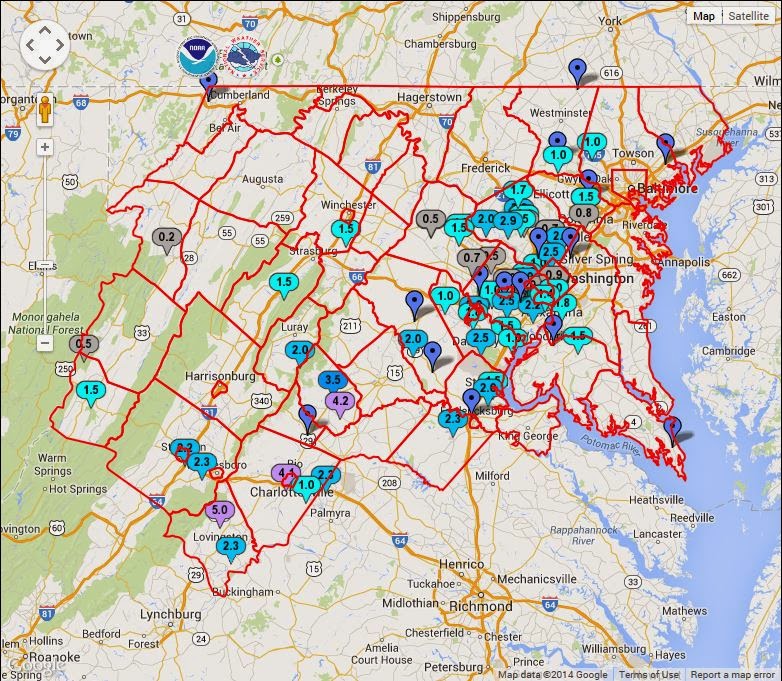 
Area-wide totals ranged from a trace to about 4 inches with more in the immediate D.C. area and points west and south. Baltimore had less. My understanding is that the Delmarva around Rehoboth had upwards of 6 inches (as that area was close enough to the main precipitation shield of the storm in the evening).
Here are the summary snowfall statistics for the three regional climate stations (through midnight). The normal period is presently 1981 - 2010. There was a "trace" of snow at KDCA and KIAD today with some late morning snow flurries. 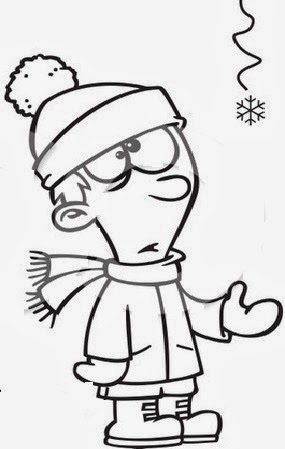 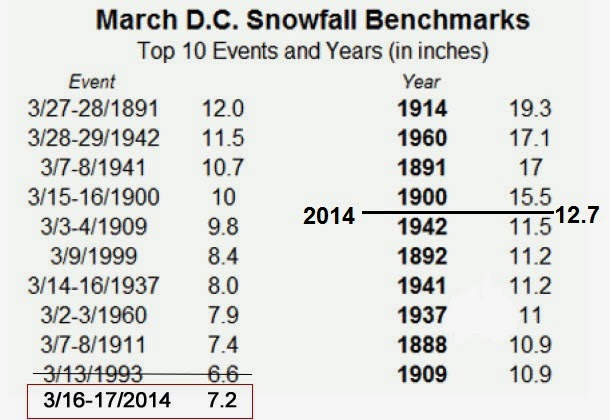 Updated rankings of snowiest March events and overall monthly totals for Washington, D.C..
This is now the 5th snowiest March officially on record for Washington, D.C., including all those snowy winters of the late 19th and early 20th Century (long before National Airport official observations started in 1945). The March 2014 total is now 12.7 inches. Normal is just 1.3 inches. 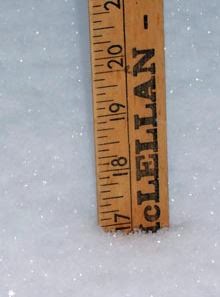 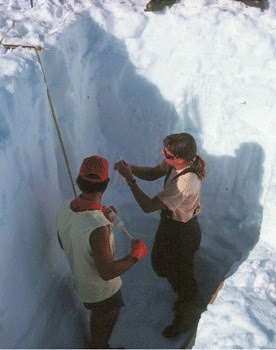 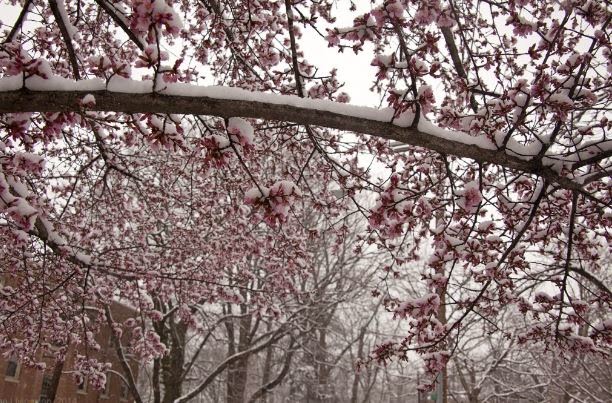 Cherry blossoms (though not the signature Yoshino "Japanese" ones) emerging despite the snow in Washington, D.C., March 25, 2014. This picture was also taken by Ian Livingston (see above link).
As it is, the blossoms -- Yoshino, double-flowering Kwanzan (my favorite), assorted hues of crabapples, Eastern redbud, and whatever other ones you like -- will be coming out in the next couple weeks in their floral splendor, and the city will look just beautiful, even if it is overloaded with tourists. The cold weather has held the blossoms and the tourists at bay.
*******