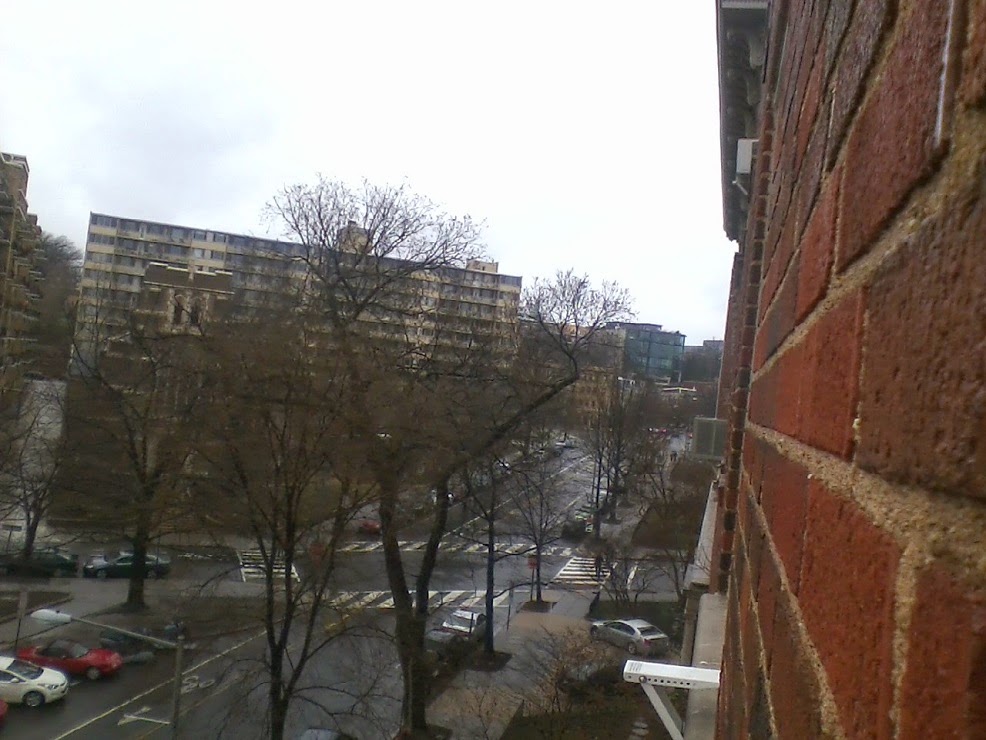 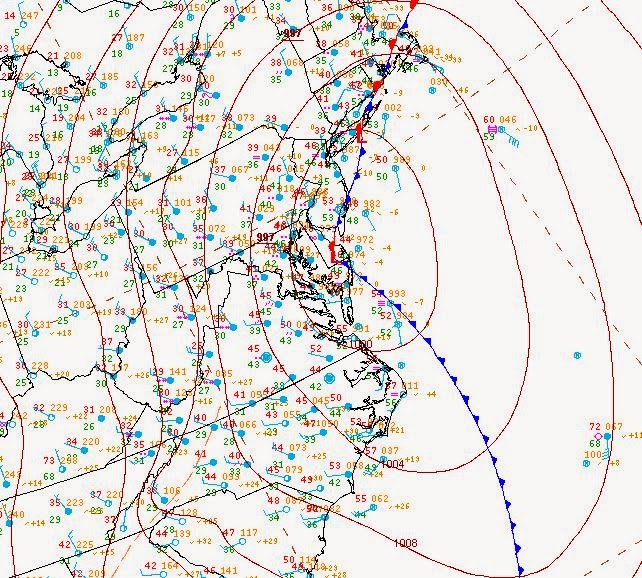 
It is a showery, gusty, even outright stormy and rather chilly day across the Metro D.C. and Baltimore areas as a vertically-stacked cut-off low is parked almost overhead (at 11AM it was put just east of Charlottesville) and a surface reflection with attendant fronts located at 8AM over southern Delaware. The system is thus almost perfectly vertically stacked (which would also indicate occlusion is occurring). 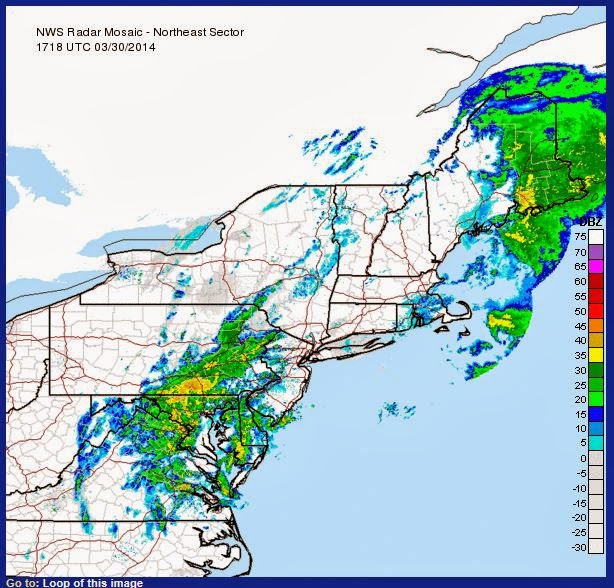 
Outside my apartment window, rain is occasionally slashing across the window screen and pinging (almost as if sleet) on my little window air conditioner. Actually, I leaned out my kitchen window and -- whaddaya know -- it IS sleeting here in my part of Washington, D.C. Guess I should check to see the freak-out going on over at the Capital Weather Gang, at least in the comment section of the current lead entry. The storm is basically generating its own cold air in terms of depressing the thicknesses. 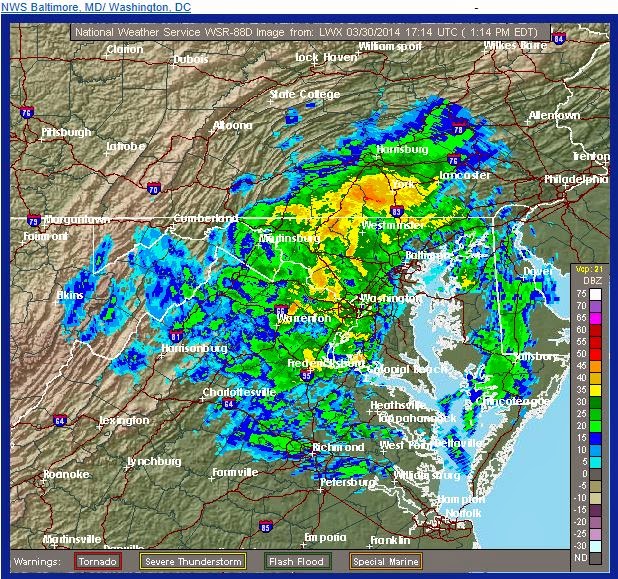 
The Sterling LWX looped radar shows waves of precipitation -- rain and sleet -- circulating cyclonically over the immediate area from NE to SW. Winds are gusting to 25MPH from the northwest and temps are ranging from the mid-30s to mid-40s Fahrenheit region-wide. It is 43F at the noon hour at KDCA with rain while KIAD is 37F and is actually reporting snow flurries. KBWI is at 40F.
Here were some other radar images for this storm event from earlier ... 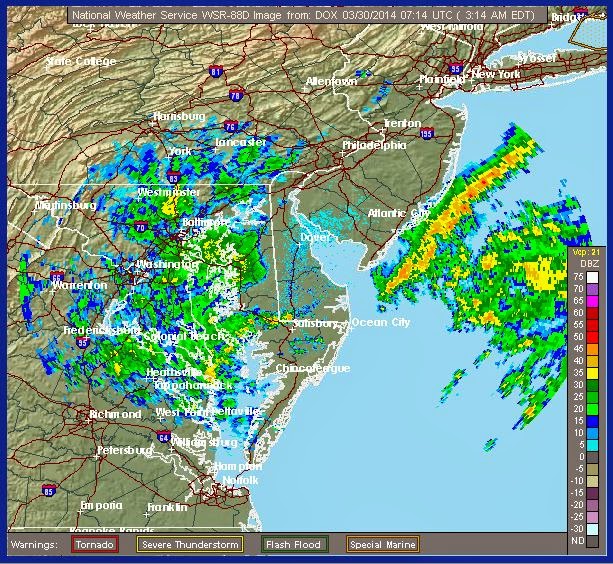 This was the Dover NWS radar (DOX) at 3:14AM this morning showing a conveyor belt of precipitation just off the Jersey shore that was actually moving NNE'ward into central / eastern Long Island. The radar also shows the precipitation over the D.C. area.
******* 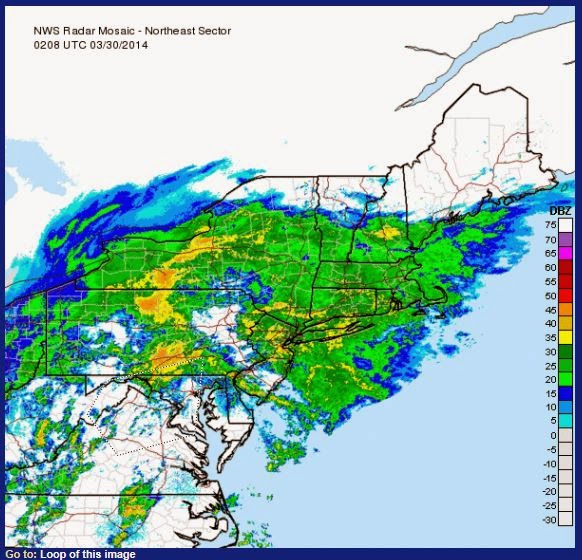 The Northeastern U.S. radar mosaic (a series of composite-mode radar images all put together) valid at 0208UTC March 30, 2014 (10:08PM EDT March 29, 2014). This shows the storm system before it became vertically-stacked and completely cut-off with a significantly larger precipitation shield over New England.
*******


There has been accumulating snow today above 1,500 foot elevations in the Potomac Highlands and Blue Ridge / Shenandoah. While there is a winter weather advisory for those areas, no other weather advisories are in place for the Sterling LWX county warning area except gale warnings on the Chesapeake and tidal Potomac River. 
This event should push the three airport climate stations into precipitation surplus for the month and year-to-date. I'll post the monthly and year-to-date totals once March is over.
All in all, a rainy, gloomy, stormy late March day, and I quite like it. 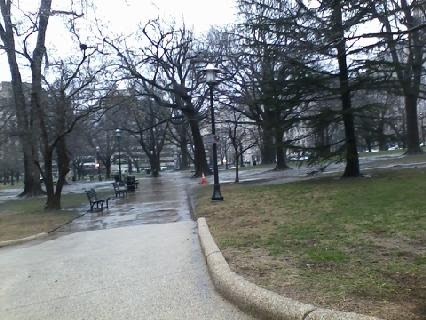 
As for today, I must go to the gym, as I didn't go the past two days. I'll try to get there by 4PM-ish.
Last night, as I noted in my previous entry, I went with Quill to Eatonville and then we watched Star Trek: TOS and the Svengoolie-hosted monster movie on Me-TV. The movie was The Invisible Man starring Claude Rains. I didn't really like it but I suppose it's a movie you have to see once. As for Svengoolie, he had the usual groan-inducing puns and rubber chickens and a few political jokes.
Thereafter, I went to No. 9, where I met LP, and we subsequently went to Nellie's to closing time. 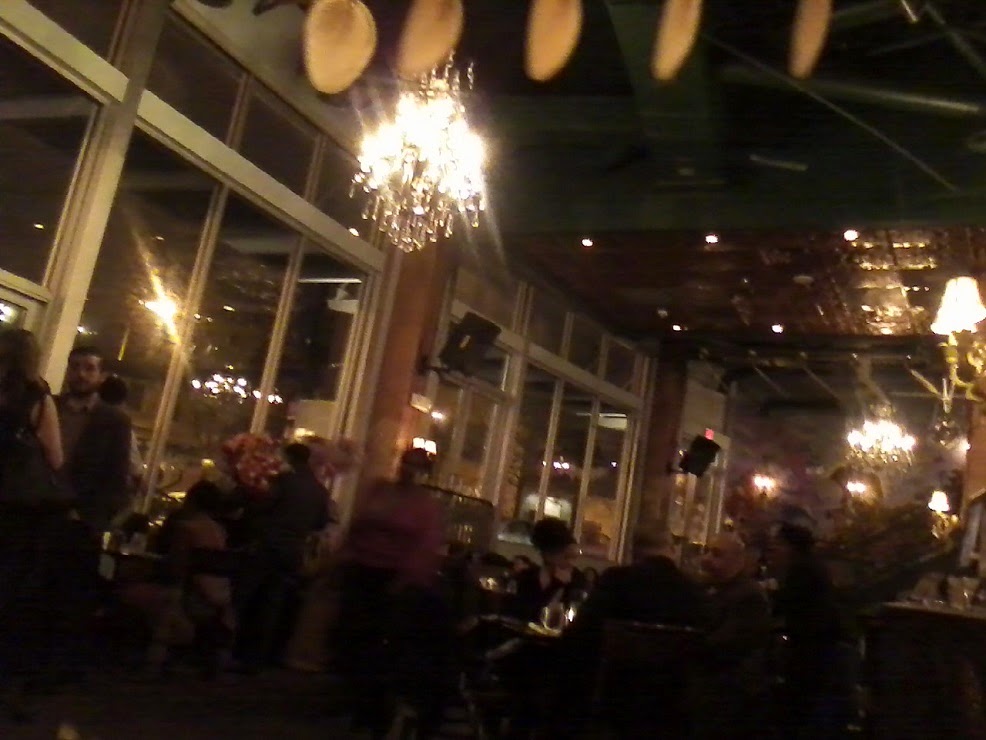 Interior of Eatonville, Washington, D.C., 8:46PM March 29, 2014.
Eatonville is quite a remarkable place in terms of its clientele and bustling yet festive atmosphere. The wall murals, though, tell a dark story of slavery and the African American experience. Somehow, it all works, though, especially with the Zora Neale Hurston quote in the entrance way.
******* 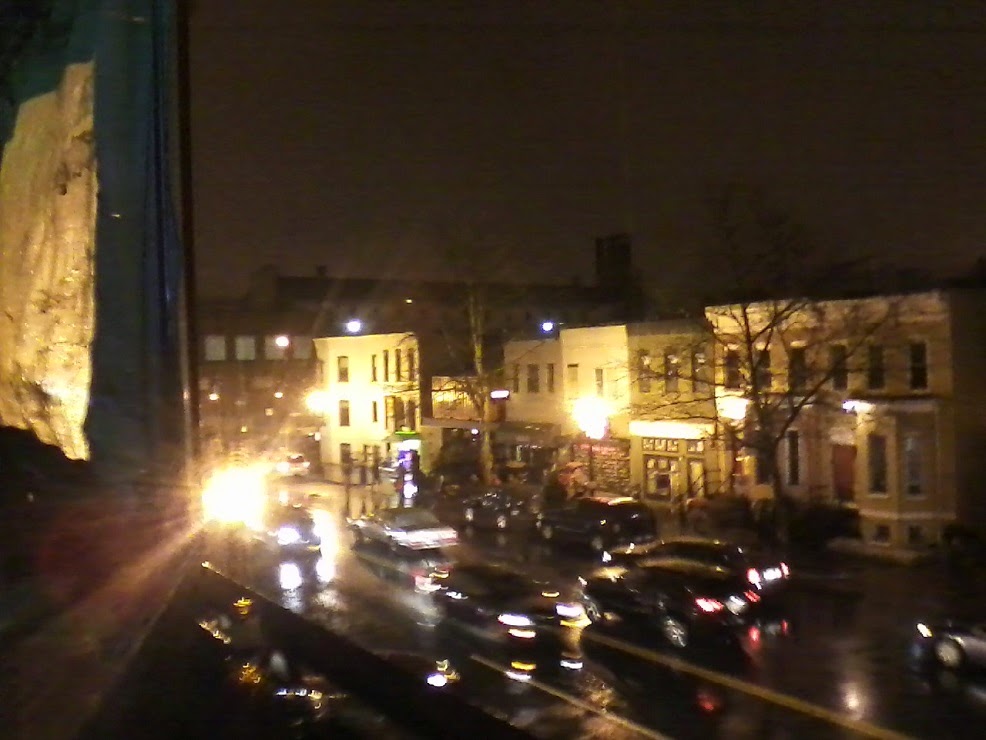 
As I write this (at 1:44PM) it is both raining and sleeting noisily outside on my window air conditioner and sill). Furthermore, the rain that is also falling looks as though it could turn to snow. It's that kind of weather day.
OK, that's all for now, but before I go, I would like to post this clip of Bill Maher excepted from the closing "New Rule" segment of his most recent Real Time episode. It speaks for itself but in short, it tells idiot Democrats to stop being such flippin' wimps and wussies and embrace who and what they are and are trying to do. I also liked his nice shout-out to President Jimmy Carter and while Dems should embrace him rather than run away from him.
The problem is that the Beltway media and political elite -- the Fred Hiatt Gang of 500 lapdogs and bribed tools of the corporate oligarchical overclass here in the Capital of the Empire -- are so steeped in their meta-narrative that only by being Republicans can Democrats win that Michael Barone and George Will end up dictating received D.C. conventional wisdom.
I never did post the Bill Maher one from earlier this month featuring his epic anti-God rant ...
In this one from March 14th, 2014, Maher calls God "a psychotic mass murderer" and "a dick" and observed "if we were a dog and God owned us, the cops would come and take us away") that was triggered by the movie Noah. It's kind of epic.
*******


OK, that really is all for now. It looks as though I have posted 31 entries this month -- as many as their are days in the month of March.
--Regulus
Posted by Regulus at 2:37 PM