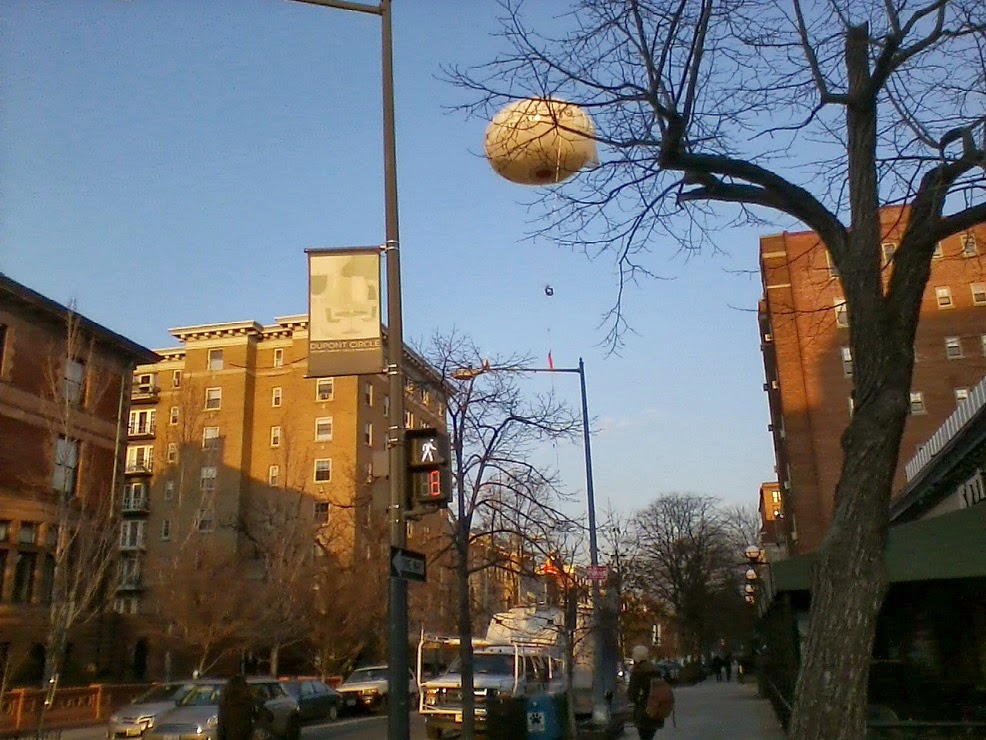 A hot air balloon belonging to Digital Design & Imaging Service (DDIS) that had been lofted high above Dupont Circle (I can't estimate but perhaps 700 feet) is retracted downward to the truck carrying it that was parked at the intersection R Street and Connecticut Avenue NW, Washington, D.C., 6:40PM March 21, 2014.
*******


OK, I started this entry earlier tonight but did not complete it. In the meantime, I went to Larry's Lounge, where I met up with Gary and Kristof. While Chris did not show up, I unexpectedly met up with Craig M., a long-time bar friend that I rarely see these days. 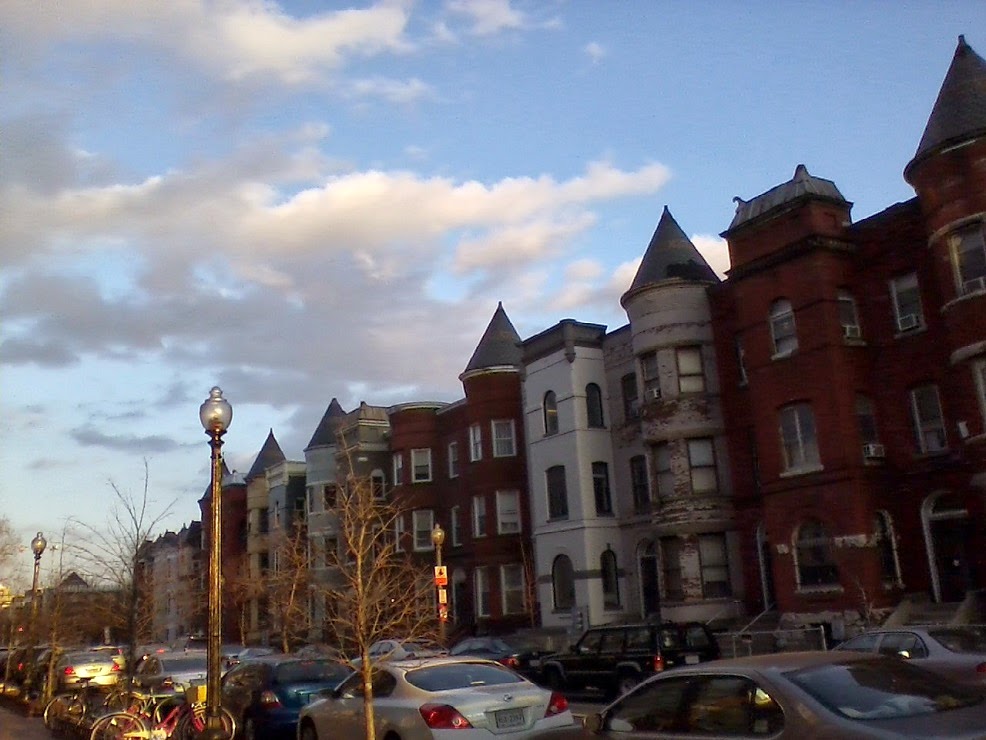 
I'm home now watching TV (reruns of The Golden Girls). I'm going to bed shortly. I will try to update the blog tomorrow night as well. It is a cold and blustery night (around 35F here in D.C. with a gusty northwesterly wind). As for the "big storm" that supposed to form, it is going to be so far offshore that I'm not even going to bother with it (even if we get a bit of snow from it on Tuesday).
As it is, Nova Scotia might be walloped ... 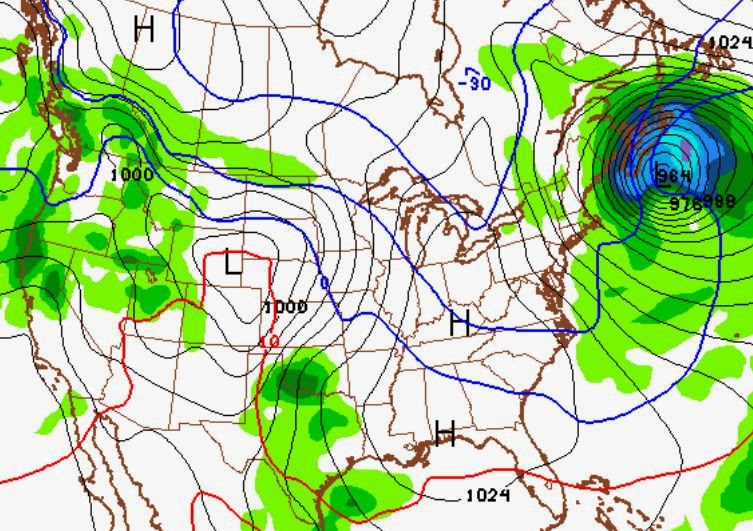 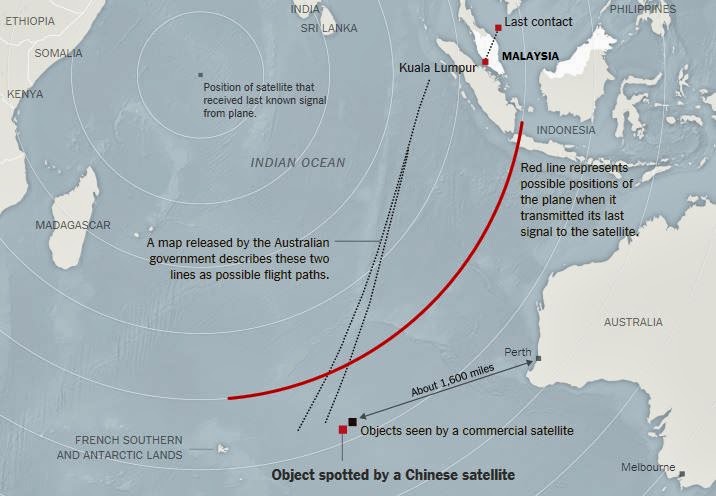 The search corridors for Malaysia Airlines Flight MH 370 from The New York Times showing based on satellite date.
*******


Sunday evening. I'm home making dinner after a good gym workout that excluded only my final 20 - 30 minute swim in the pool (as it was too crowded). I'm going to go to Larry's Lounge for a bit to meet Gary and maybe Chris. 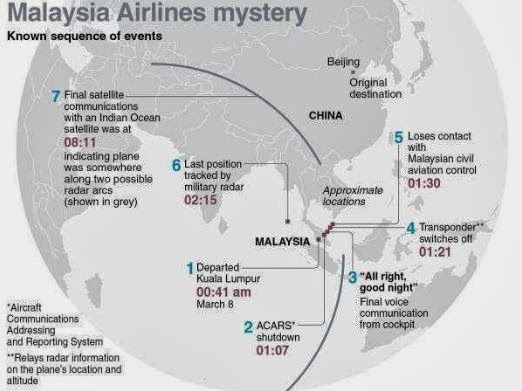 
I am presently watching on MSNBC a program about the on-going mysterious disappearance of Malaysia Airlines Flight MH370 (now just referred to as "Flight 370"). (Also, as an aside, Flight 370 has been replaced by Malaysia Airlines with Flight 318.)
The mysterious disappearance is quickly become a legend with conspiracy theories and false multiplying faster than Fox News Channel outlets in Red State America. The way I see it, this is the D.B. Cooper story, but it's on a massively larger scale involving 239 people on board that Boeing 777 jet and upwards of 28 MILLION square miles of Planet Earth (based on how long the jet may have flown), none of which are American territory, and 24+ nations. 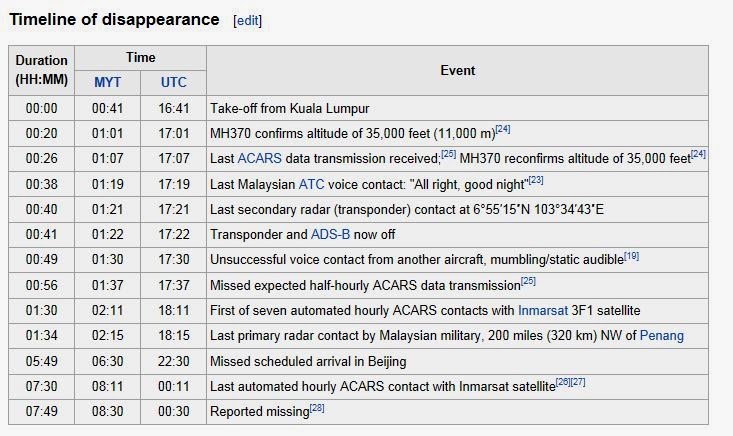 The timeline of events of Malaysia Airlines Flight MH370 as it appeared yesterday on the Wikipedia site. Click on image for larger / readable version.
*******


The jet disappeared on March 8th in the wee hours during a flight from Kuala Lumpur to Beijing with its final known location somewhere over the southern Gulf of Thailand between Malayaia and the southern tip of Vietnam. It was soon realized that the jet had made a sharp left (westward) turn that brought it into the eastern Indian Ocean. 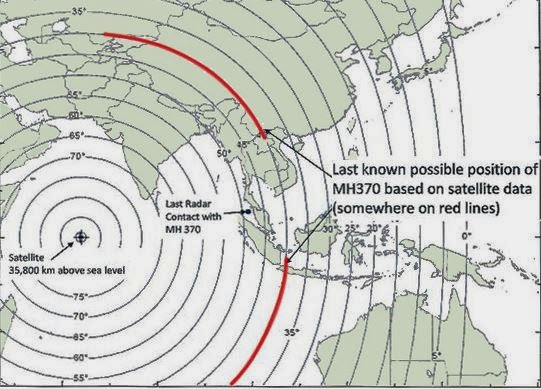 The "ping corridors" including the last known possible locations (somewhere on the red lines) of Malaysia Flight MH270 based on a satellite over the Indian Ocean on March 8, 2014.
*******


A satellite over the Indian Ocean picked up a signal from the jet that suggested the aircraft could have flown over an area pretty much encompassing the entire Indian Ocean and South Asia. However, based on the far heavier radar coverage on the "northern corridor" of this path, the search focused on the "southern corridor." Furthermore, based on the fact that the jet is thought to have flown essentially on autopilot (which was somehow reprogramming in-flight), the search area has focused on an area about 1,500 miles west-southwest of Perth, Australia.
By the way, the search location is not far from the ANTIPODAL point from Washington, D.C., though it's probably more like Toronto; the search area is almost into what is called the Southern Ocean). 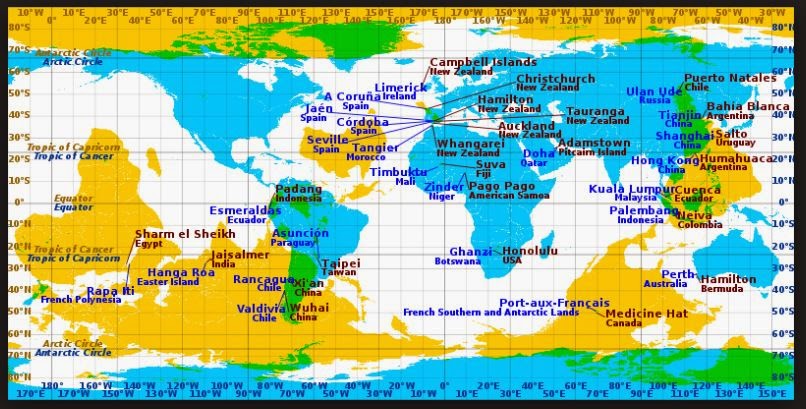 A map of the continents with labels of locations showing the antipodal points as reflected in the inverted continents superimposed on the map.
*******


Over two dozen nations have joined in the search including the United States but it is China -- which lost the most people -- that has sent the largest search armada in its history to search for the jet's wreckage. Satellite data and images are being used to assist in the location of possible wreckage targets. It was on Tuesday that China announced one of its satellites had spotted an object about 74 feet long and 43 feet wide and about 75 miles to the south and west of objects seen two days earlier by a separate commercial satellite. 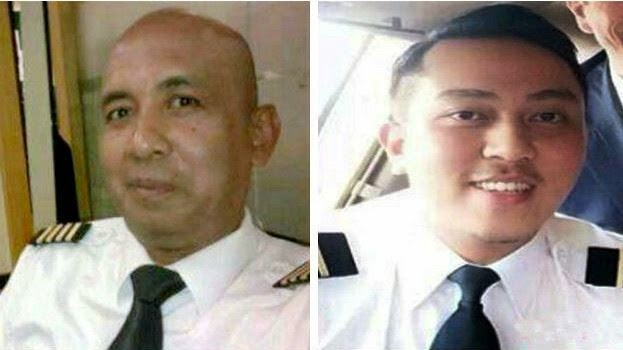 
As for the investigation, it is now thought that whatever happened to change the course of Flight 370 was in the words of Malaysian Prime Minster Najib Razak a "deliberate" act. However, it remains totally unclear (despite much speculation) whether the pilot or co-pilot or both are somehow responsible for what happened, or another unknown party. The Malaysian authorities already had the homes of both men searched with the (somewhat unusual) sophisticated flight simulator possessed by Captain Shah seized. 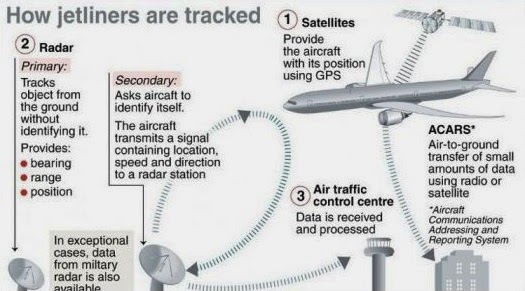 A schematic diagram of how jetliners can be tracked with satellites, ground-based civilian and military radar, air traffic control, and ACARS.
*******


What is known is that the aircraft's transponders and Aircraft Communications Addressing and Reporting System (ACARS) were all turned off and the Flight Management System (FMS) had been reprogrammed in flight.
All of this is very unusual, and the search goes on.


Oh, and as I mentioned, this story understandably continues to get heavy coverage in the American media because of the mysterious nature of it. It is also basically a non-political story, except on Fox News and rightwing talk radio and internet sites, where it somehow ties into Benghazi and perhaps Obamacare -- er, sorry, "ObamaCare" -- and whatever else their fevered imaginations can create. Meanwhile, on CNN, Don Lemon wondered last week if the jet had disappeared into a black hole ... 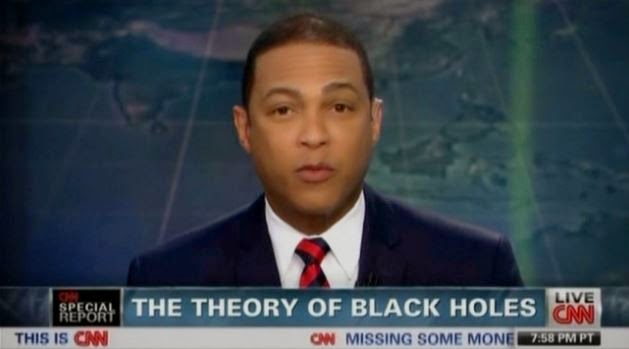 Right. Don Lemon asks the hard questions.
OK, that's all for now. G'night.
--Regulus
Posted by Regulus at 1:36 AM