Monday Morning Brief Update: The Old Radiator and the New Boiler: Not Perfect Together 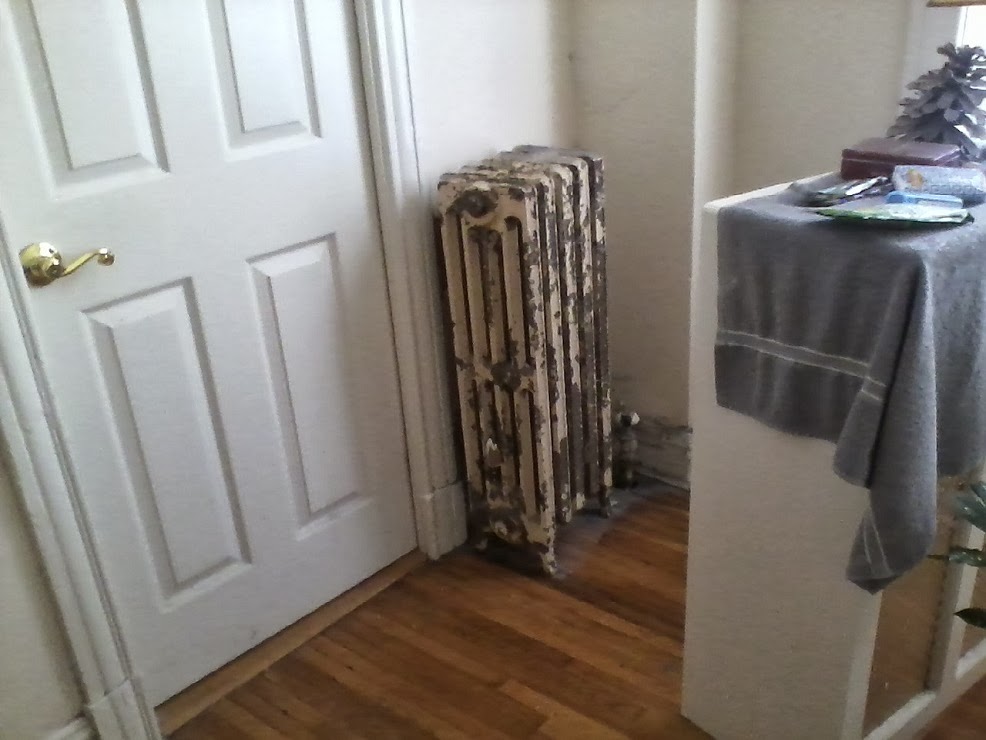 My old radiator in the corner of my apartment, Washington, D.C., 9:53AM March 10, 2014.
As explained below, it was hissing wildly and spewing hot water and steam from the little valve on the side (you can't quite see it) last night. The heat is now shut off to the whole building because of that. The old ladies in the building are surely complaining.
******


Just a really quick Monday morning update ...
I'm feeling fatigued and a bit headachy this morning. I'm definitely feeling the loss of one hour yesterday for the start of the annual American-created scam of daylight savings time, but let's avoid that now.
I had two good gym workouts in a row -- Saturday and Sunday -- including 6 mile treadmill jogs each day, weightlifting, and a half hour of swimming yesterday. I am taking today off. I'm actually supposed to meet Mike G. tonight for dinner at Old Ebbitt Grill.
About dining / going out, I really need to be cautious with my money this pay period because it is both a long one between pay checks (full 17 days) and a rent paying one (and it follows the absolute shortest one possible of the year due to a combination of it being February and the placement of a weekend-- 11 days).
Last night, I went to Larry's Lounge for a bit with Gary and Kristof, and it was pleasant enough. But when I came back, my radiator was hissing wildly and spewing hot water and steam onto my floor, though thankfully only the floor was getting wet (my TV and its wires were just out of reach). I called the building maintenance man -- who is absolutely wonderful in terms of diligence and immediate responses, and I intend to let William C. Smith & Co. know this -- and he quickly showed up despite the midnight hour. He called the building site manager, and she told him to turn the heat off to the building.
A new boiler was just installed and apparently at least some of the radiators in the building are too old to handle the pressure of the new boiler. This has happened in at least one other unit. In the case of mine, the ancient valve no longer works (it has always been in the fully off position but it doesn't matter). It is supposed to be fixed in the next few days.
As it is, the weather is supposed to be mild until Thursday, when it gets briefly cold again with a chance of rain ending as a bit of snow even here in D.C. Today it is supposed to reach 60F and 65F tomorrow here is D.C. It's about 43F right now. I think next week might feature a significant East Coast. But let's wait before hitting the button on that one.
Changing subjects, I have a busy week at work both with the Hawaii project (referencing work) and editing two 70+ page documents.
My mom is having surgery this week (gallstone removal). It isn't major surgery, although it isn't trivial, either, especially when you're in your 60s. I'm not sure whether to go up to Baltimore (the hospital isn't conveniently located to anything and I lack a car). Actually, I haven't heard from her in a while.
I had a 40-minute talk with my dad down in Florida last night. It was about as sane and normal a conversation as is possible with him these days.
OK, that's all for now. I'll try to update this blog tonight. In particular, I need to note the passing of the great liberal blogger Bartcop, and to explain why he was such an important figure for me and for many others over the years, in particular during the worst of the Bush years. Bartcop died last week. He had been sick for some time.
--Regulus
Posted by Regulus at 10:06 AM