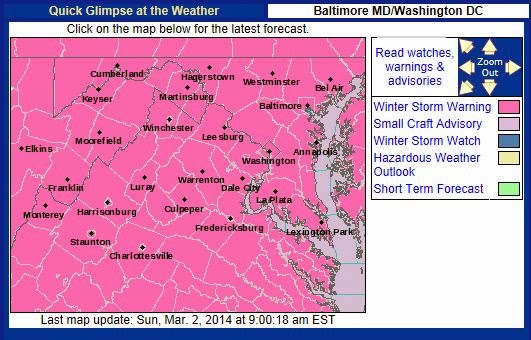 The Sterling (LWX) county warning area (CWA) advisories in effect as of 9:00AM March 2, 2014. This map also includes parts of the Wakefield (AKQ), Mount Holly (PHI), Blacksburg (RNK), State College (CTP), and Pittsburgh (PIT) forecast offices. Every point on the map is under a winter storm warning including the middle to lower Chesapeake Bay.
*******


Getting into a conversation on the CWG site in the comment section reminds me again of the quote about the Special Olympics and arguing with people on the internet. IT reminds me of my STUPID political internet flame wars back in 1995 - 1996 during the Dawn of the World Wide Web specifically, on the original Washington Post.com website.  Then and now, this country is so overloaded with rightwing and/or clueless yet aggressive libertarians (usually men), and I was a damn idiot and fool to take part in any such "debate" back then. 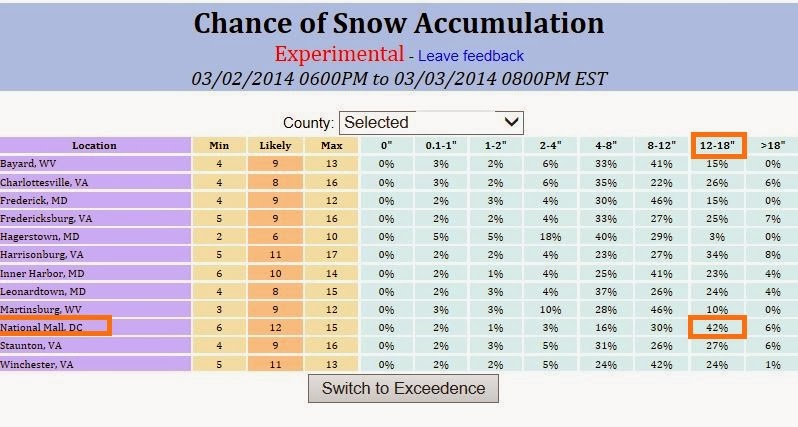 Snowfall ranges and probabilities for select points in the LWX CWA for the period 6PM tonight through 8PM tomorrow. Click on image for larger version.
I have highlighted the National Mall point. It shows that the 12 to 18 inch range has the highest likelihood: 42%. However, the forecasted most likely amount (see below) is 10 to 12 inches.
*******


This was back when the bullsh!t promises of the internets were touted as the arrival of a techno-glibertarian utopia with everyone connected by a modem, a copy of the Second Amendment, no health insurance, and that Open Frontier next to the Walmart. James K. Glassman was writing his weekly columns for the WaHoPo op-ed page (yes, Fred Hiatt was there even then), while Internet trolls were multiplying as fast as foundation-funded D.C. rightwing think tanks. And the NASDAQ was inflating on the tech bubble -- UP 200 POINTS TODAY! LET'S PUT ALL OUR RETIRMENT AND RENT MONEY IN THAT CASINO!

The Whitewater Hoax, Cokie Roberts, and rightwing hate radio (Rush Limbaugh and his imitators) were already fouling the world, but we were still a few years away from Monica's Dress and the Fox News Channel. And as the years went on, we Somewhere along the way, we instead ended up in a Matrix-like reality. 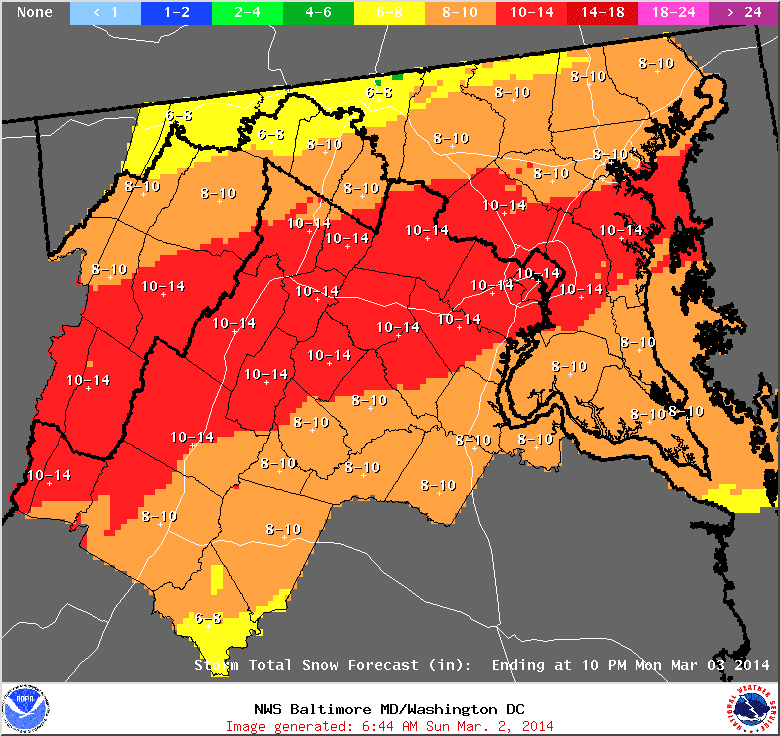 The most likely snowfall map issued by Sterling for its CWA at 6:44AM this morning valid through 10PM tomorrow (March 3, 2014). D.C. is in the 10 to 14 inch range.
Note: The 9:44AM update shows the same thing. I think these images are auto-generated although I suppose a human can manually change them.
*******


Anyway, the issue is that Sterling -- that is, the actual National Weather Service office for our extended combined Metro D.C. and Metro Baltimore region -- has upped the forecasted snow totals for the immediate area to 10 to 14 inches while the CWG continues to hold onto its 5 to 9 inch map. Furthermore, the minimum amount at KDCA that Sterling's Winter Weather Page at the present time (945AM March 2nd) shows is 6.4 inches, which doesn't jibe at all with the 5 to 9 inch most likely range. 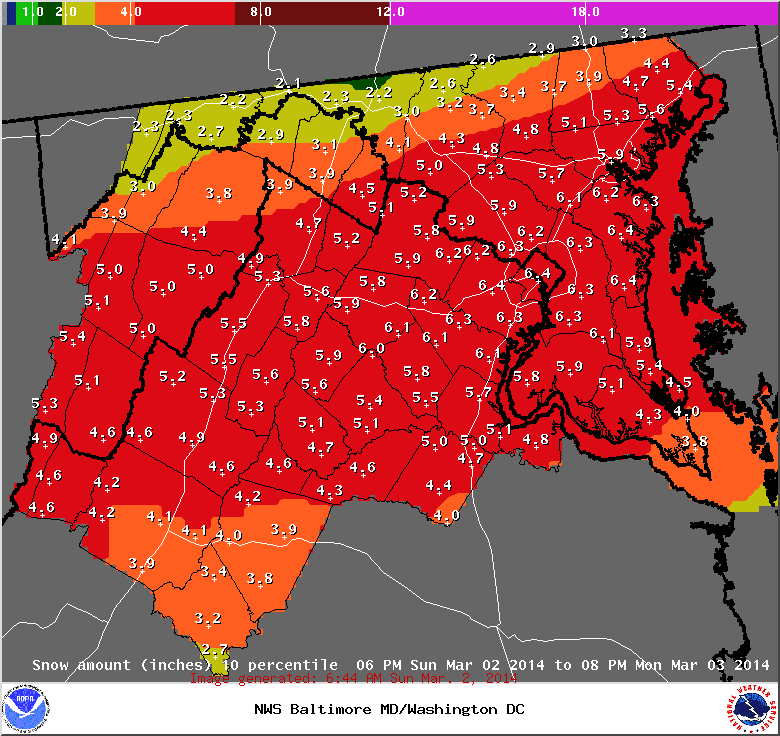 The minimum snowfall amount for this event -- based on the 10th percentile -- valid from 6PM tonight through 8PM tomorrow for the Sterling CWA. KDCA is 6.4 inches in this scenario.
*******


Now I have NO IDEA what is going to happen -- and since this IS D.C., it's always a good bet to assume a bust. Indeed, the NAM continues to advertise a storm that would basically just miss D.C. proper by about 50 miles to the south and we would get maybe 4 to 6 inches, if we're lucky. This is quite possible. However, the GFS and various ensembles are more bullish on snow here.
GFS and NAM P-Total Comparisons ... 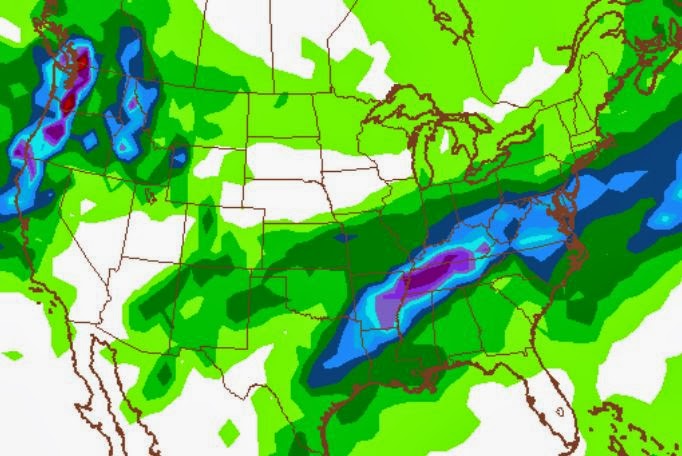 Today's 6Z GFS showing 48 hour precipitation totals ending at 6Z (1AM EST) March 4, 2014. This shows D.C. having between 1.25 and 1.50 inches of liquid equivalent. I've no idea the snow-to-liquid ratio for this storm but it will be changing (increasing) as the Arctic air moves in and temperatures plummet.
*******


My point right now is just that the CWG has an increasing tendency to want to say that it was right and Sterling was wrong, and in those cases when it is flat-out wrong (such as with the surprise 3.8 inches of snow at KDCA last week), declare that no one (not even God) could have known. The CWG is increasingly showing that Washington Post culture of which it is a part. 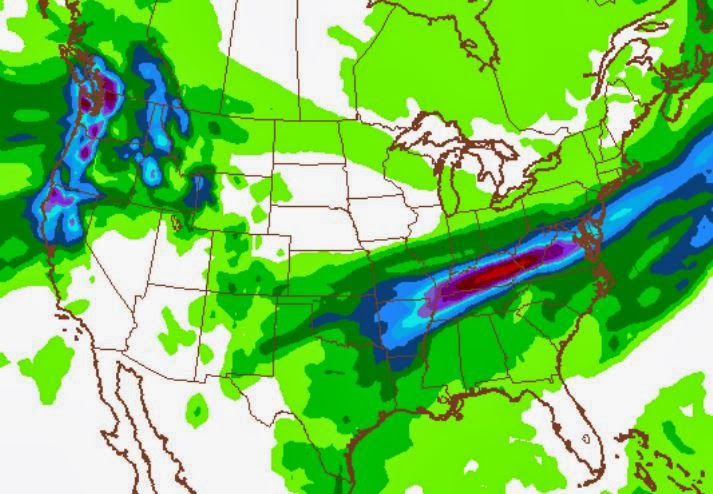 Today's 12Z NAM showing 42 hour precipitation totals ending at 6Z (1AM EST) March 4, 2014. This shows D.C. at the northern edge of a highly striated zone with KDCA itself between 0.75 and 1.00 liquid equivalent. Again, I've no idea the snow-to-liquid ratio.
My sense is that there is some sort of convective feedback going on in this model that is giving what would amount to thunder-snow storms over Tennessee.  However, at this point, I'm just guessing.
*******


Again, I want to be clear: It is EASILY possible that the snowfall amounts will turn out to be substantially LOWER than forecasted for D.C. proper. Indeed, maybe it will even be a bust. That is SO not my point. I get it: This IS Washington, D.C., and it is the year 2014.
Rather, and to restate, my point is that the CWG just wants to be right all the time, and increasingly, it thinks it can out forecast Sterling.
UPDATED 1:56PM 3/2/2014: Sterling has significantly reduced the snow forecast total for our region. 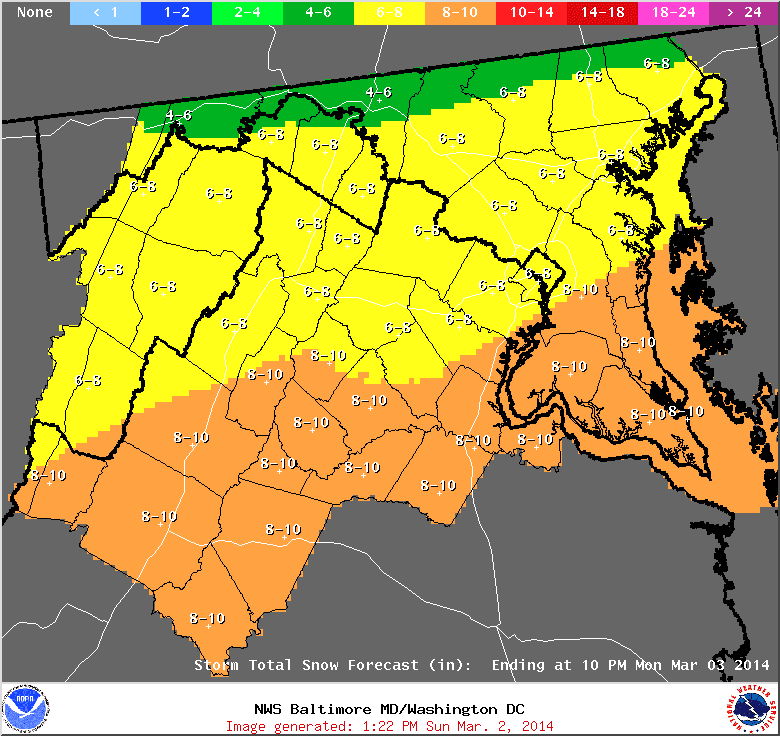