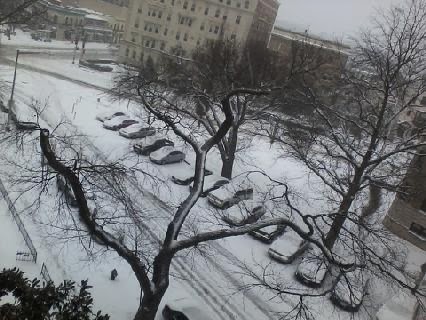 
This is a morning early afternoon update. I'm home since the Federal Government is shut, although as an offsite contractor with billable work, I am expected to telework. As it is, I may only get in a half day and just take some leave time, or else try to make it up during the pay period since it runs through March 15th.
A few inches of snow has fallen and it is still snowing lightly here in D.C. Based on the sounds on my window a/c, it appears to also be mixed with sleet. 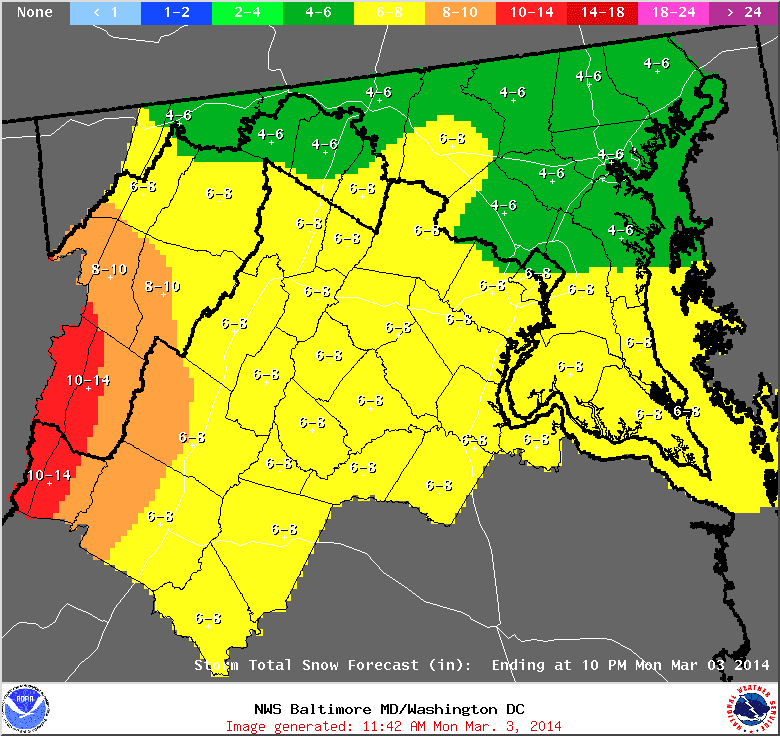 
The forecasted amounts were pared back significantly across the region -- see map image directly above taken from the Sterling Winter Weather Page. It now has the 6 to 8 inch range and the 4 to 6 inch range cutting evenly across the District, and even that's likely too high / will be further reduced. Indeed, that forecasted snow map has been steadily pulled back for 24 hours now, and it will keep doing so until this event just peters out. (As of 7AM, it looks like KDCA itself had measured 2.0 inches or snow.) 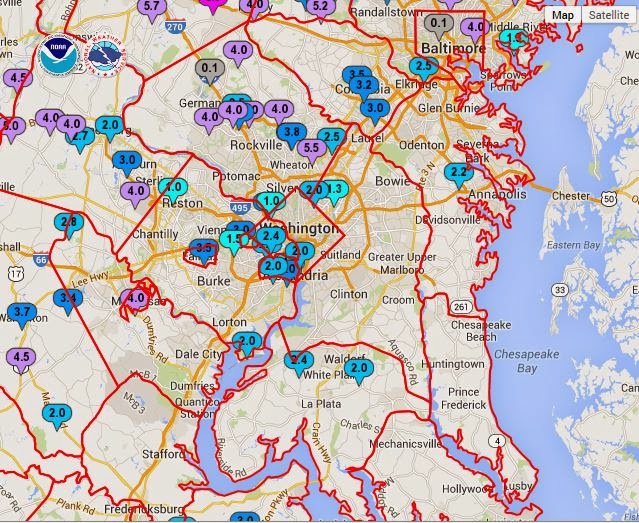 A portion of the LWX CWA map focused in on the Metro D.C. and Metro Baltimore areas showing snowfall totals as reported through 10:50AM this morning (although different amounts were reported at different times, so it is not a snapshot of all areas simultaneously). It shows 2 to 4 inches with a few higher amounts.
*******


We might get an inch or so more but that should really do it. Yes, it's a snowy day but it's hardly a blizzard / epic / historical. Or to use the weird term of art that the NWS has been using this year -- this NOT a "high-impact societal event."
Who or what committee came up with that one?? 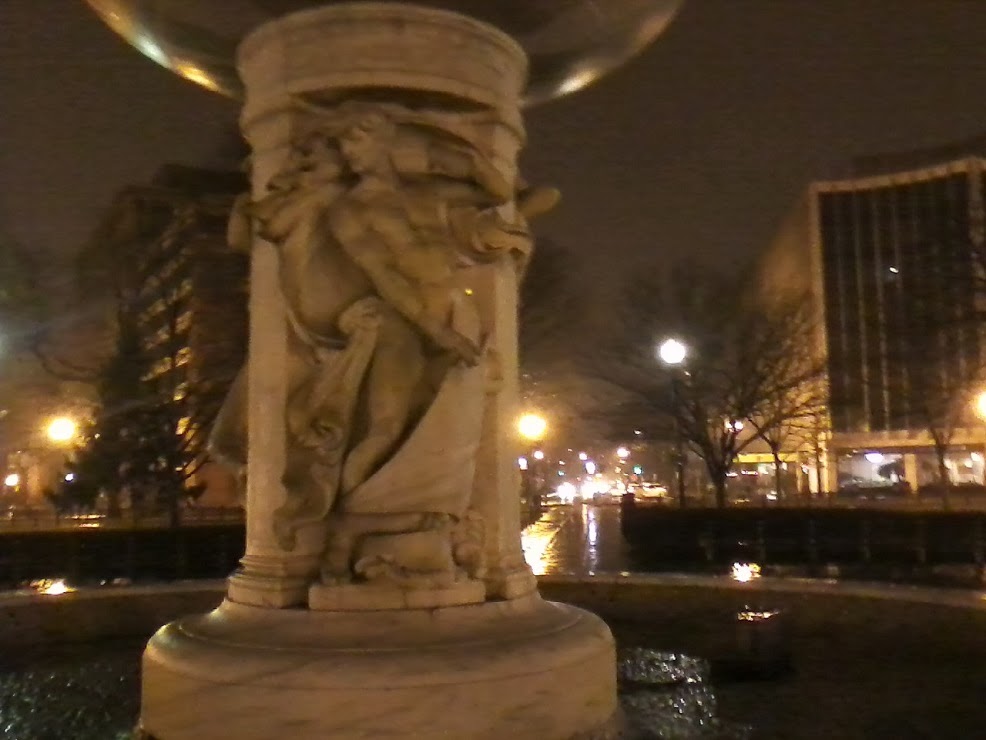 Dupont Circle central fountain facing south/southwestward (looking at the naked male sculpture that's on the north/northeast side of it), Washington, D.C., 10:42PM March 2, 2014. It was just raining at that point.
*******

So in the end, yes, the Capital Weather Gang folks can crow that they were right, although I still submit it was just an initial guess that turned out correct. They won't see it that way. For them, it will prove their unparalleled forecasting skill, acumen, and genius.

It's kind of like the way the George W. Bush was once described: Born on 3rd and thinks he hit a triple.

You can find the appropriate entry or entries off the main page. I don't really feel like rooting around on its site now.


So as for last night, I ended up having a nice time, first with Wendy and later at Larry's Lounge. I went with Wendy to 1905 for dinner, and then we walked all the way down U Street and stopped in L'Enfant Café.

The commonality of both places: NO TELEVISIONS. 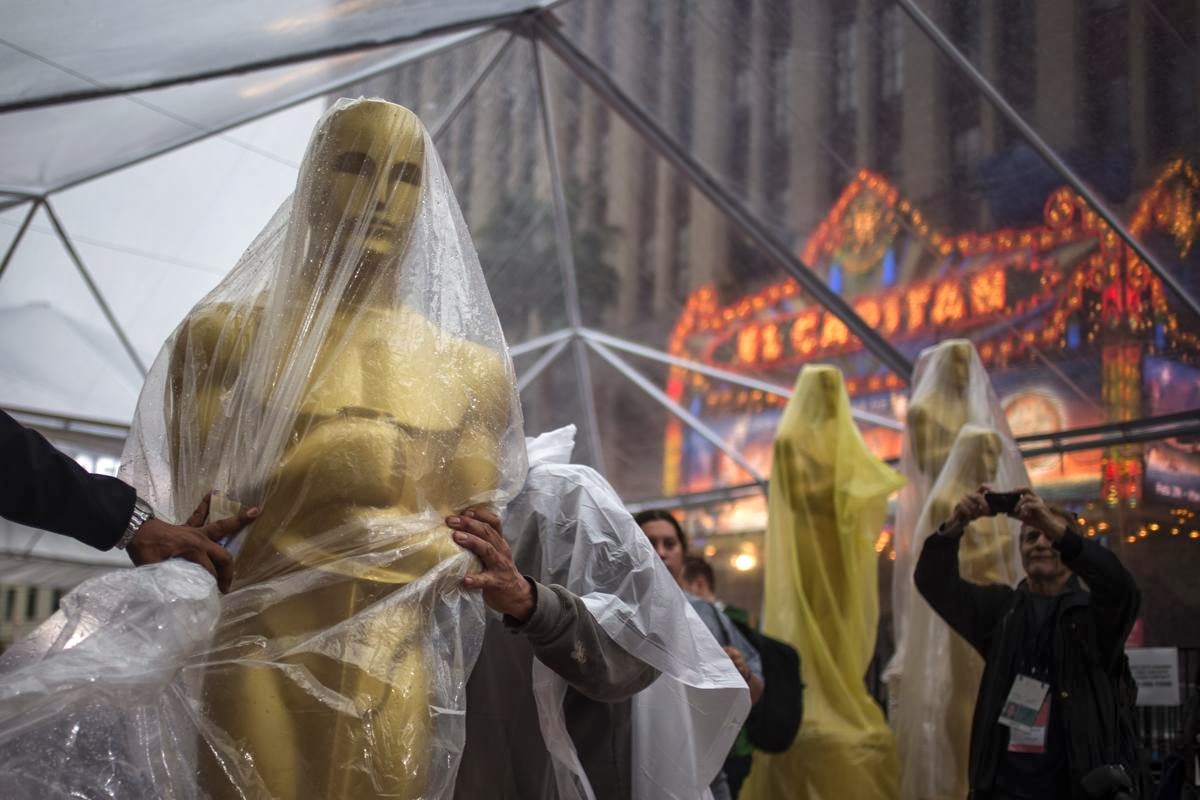 I just didn't want to see the Oscars.
(Two other restaurant / bar places in D.C. with no televisions include The Saloon on U Street and the Old Bar at Old Ebbitt Grill. Actually, while there are a couple TV's at OEG, they are easy to avoid and do not at all dominate the four main-level bars and dining area.) 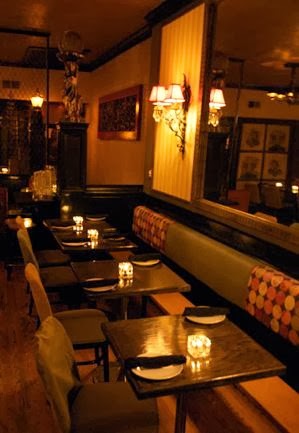 1905 is a restaurant / bar that occupies the second floor of an old row house. It also has a rooftop deck that is open in the spring and summer. It's a place that you just have to know exists as the unremarkable entrance has no sign or any sort -- the 1905 above the doorway at the bottom of a flight of stairs is simply the address (1905 9th Street NW). The place has a 1920s speakeasy quality to it (or how I imagine one to be).

Above: A picture of 1905 dining area from its website.


It was Brett who kindly showed Gary and me the place about two years ago. (Brett, who is a Nellie's manager, is a wonderful person.)
Alas, last night, there were three really noisy Maryland good ol' boy types at the little bar -- not your typical D.C. crowd, that's for sure -- and they kind of ruined the experience, though they actually left fairly quickly, and the place was just quiet then.
L'Enfant was also quite pleasant, although the place ain't cheap. Located prominently at the corner of 18th and Vernon Streets NW by Florida Avenue, it has a nice, low-key and gentle nighttime vibe to it.
I got to Larry's Lounge around 11PM, after having first detoured in the rain to Dupont Circle to the Bank of America ATM. The Oscars show was on there on the two big TVs, and there was really no way to avoid it. The place was busy with gay men. 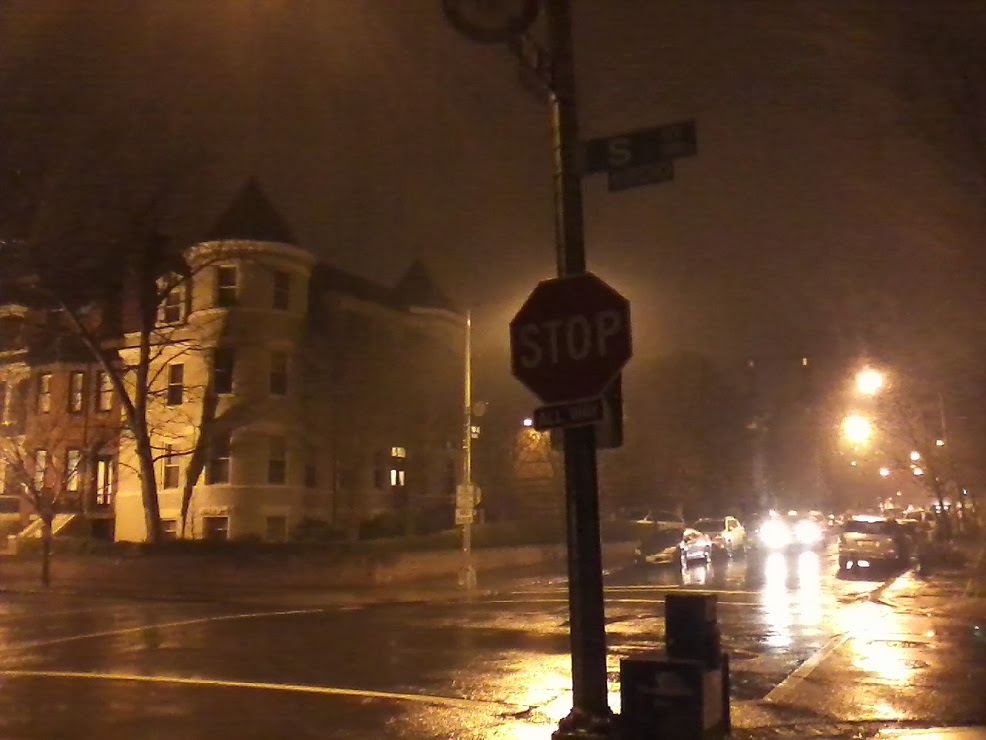 
I should note that initially, and though I'm not exactly sure why, I was in a terrible mood and was quite rude to a bar acquaintance, and I've since emailed him an apology, though I don't know if he'll forgive me. I'm not sure why I get into such foul moods.
Quickly, though, I ended up talking to Luis and Michelle in their little group -- which include their little, affectionate Chihuahua dog "Bambi" who is also a Larry's Lounge "regular." 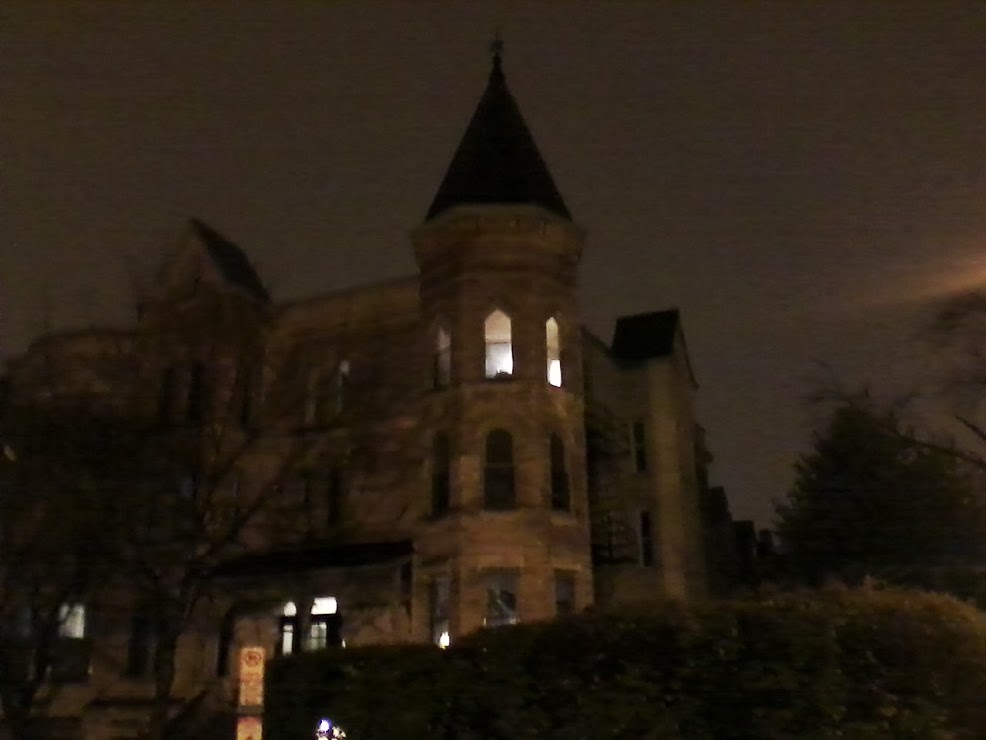 
By the time I left around 2AM, the rain was mixing with sleet, and by 3AM, it was sleeting rather heavily and finally by 4AM-ish, as I finally went to bed, it turned to snow.
Oh, yes, so in the end, I watched the last half hour of the Oscars, or rather was aware that the show was on as I was talking. 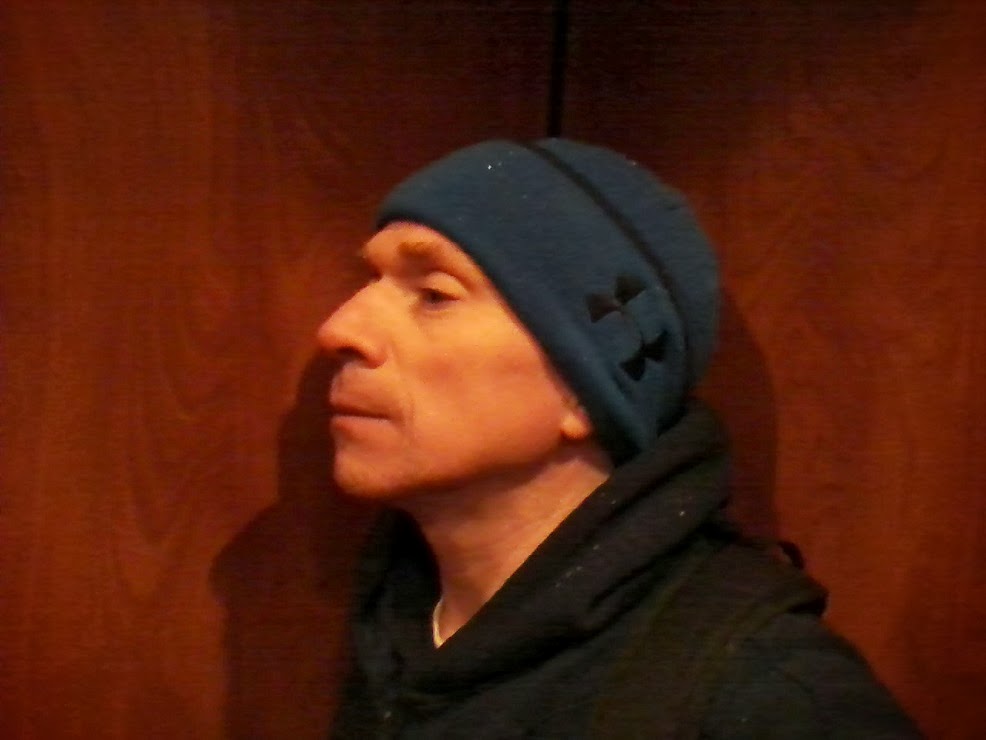 Yours truly late last night in the elevator of my apartment building somewhere in Washington, D.C., 2:23AM March 3, 2014.
When Wendy and I walked past Nellie's from 1905 to L'Enfant Café, bartender Eric was outside with his friend. He looked at me and declared, "YOU'RE ALL BALLED UP!" I guess that's in keeping with the other comment I heard one gay guy say to another last winter when similarly dressed as I walked toward No. 9: "He looks like a munchkin!" 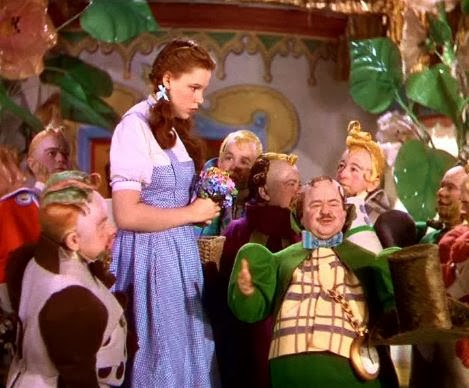 
For today, I need to go grocery shopping. I do not need to go to the gym, as I went both Saturday and Sunday. What I also need to do is drink less liquor. Full stop.
Finally, I just want to note that I've spoken / emailed a few friends with whom I have not communicated enough lately including Mike G, Quill, and Jim in Milwaukee (Hello, Jim). I also need to talk to my mom and my dad (I've not spoken to my dad in a couple weeks now). 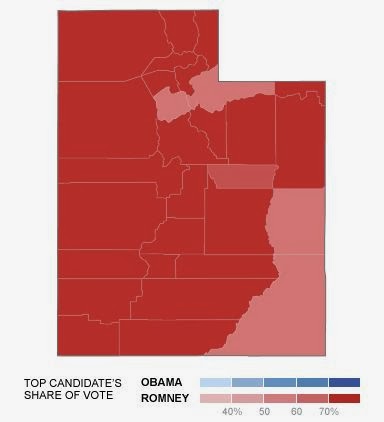 Oh, yes, Wendy and I made tentative plans to visit Utah in October during the Columbus Day weekend. Her brother lives near Salt Lake City. The idea is to visit Bryce Canyon and Zion National Parks, and maybe Grand Staircase - Escalante National Monument over several days.


OK, that's all for now. I'm just going to take a walk outside and get some lunch. Maybe I'll update the blog tonight. Looking at the radar trends, the snow should be ending in about an hour or less, although at this precise moment, it is snowing moderately outside my window.
Updated 1:17PM 3/3/2014: 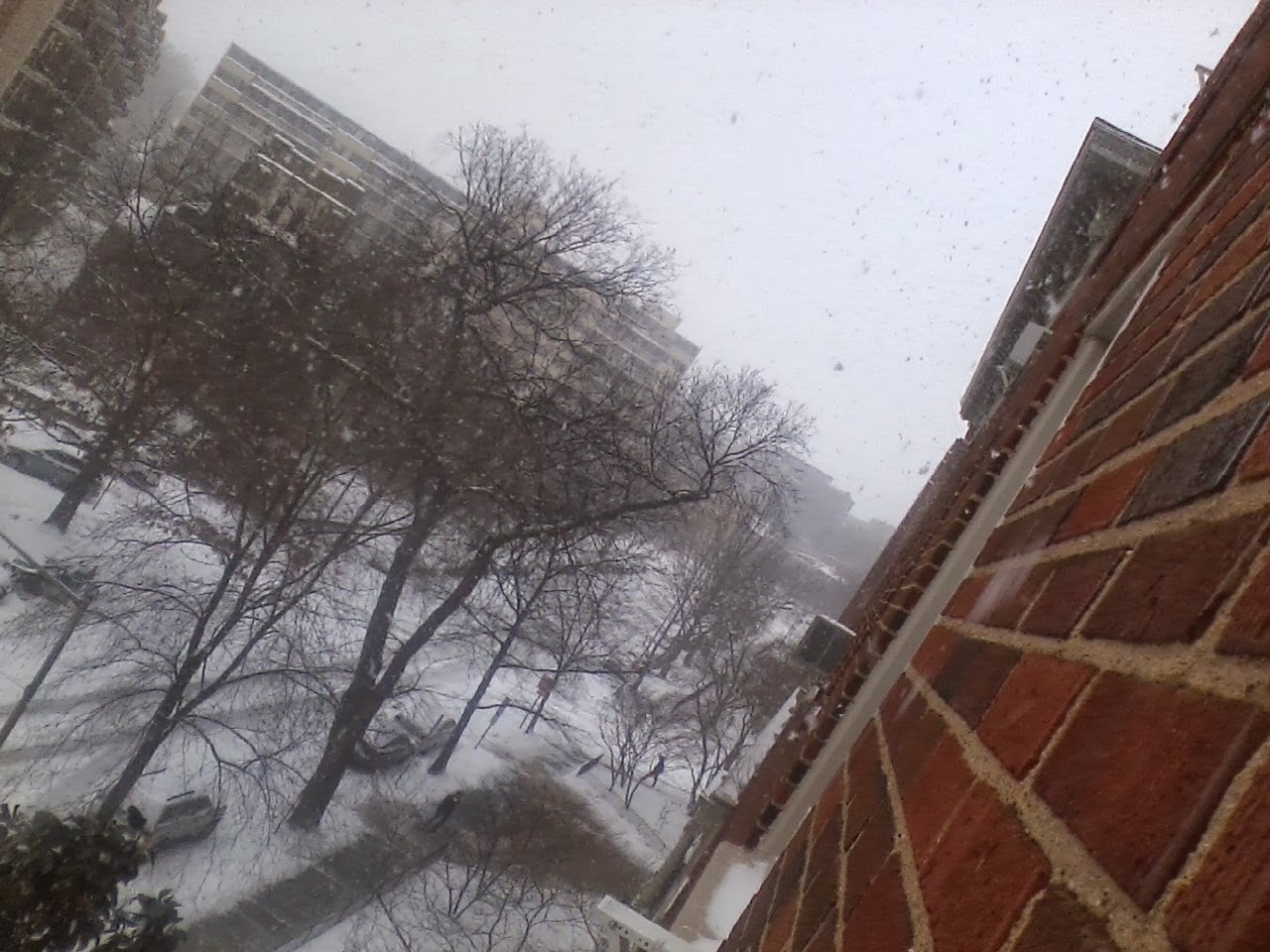 
Actually, as I wrote that line (it's now 1:15PM), it started snowing moderate-to-heavily as a band set up across the immediate D.C. area. I intend to have the final snowfall totals posted later tonight.
--Regulus
Posted by Regulus at 12:54 PM