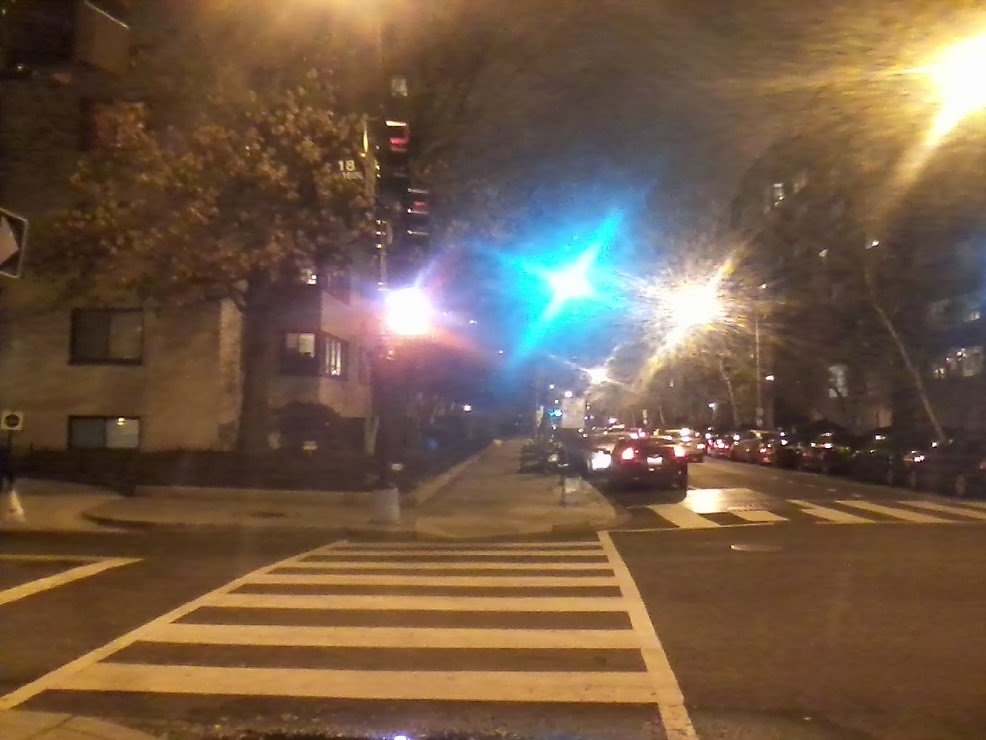 The intersection of 18th and Q Streets at New Hampshire Avenue NW, Washington, D.C., 8:05PM February 4, 2014.
I'm so happy I have the flip-open model again and got rid of that Smartphone Frankensteinian thing.
*******


This is just a quick update at the midnight hour. I'm really tired and I need to go to bed. I had a good gym workout tonight, though this followed a rather rough morning into the afternoon owing to last night's activities with Gary at Larry's Lounge, which followed two hours at Dupont Italian Kitchen upstairs bar. Chris H. was working there last night. 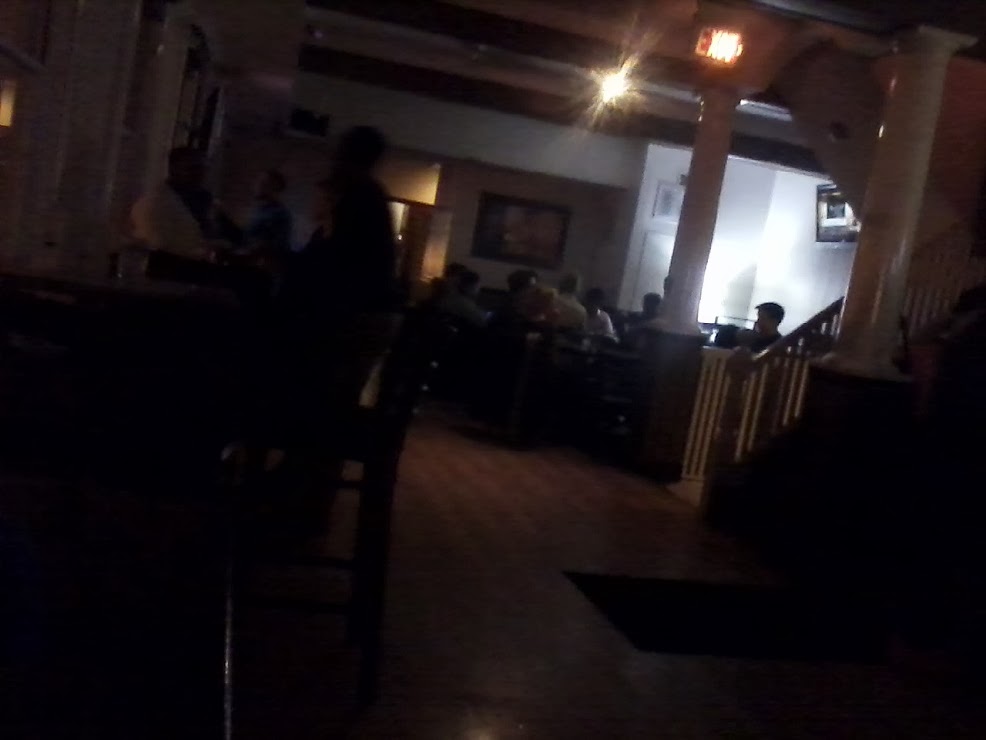 
Speaking of Chris H., long story short, I will be watching his adorable puggle dog Brady this weekend because Chris is going away to the Florida Keys for five days. I'll have Brady stay with me in the apartment Friday, Saturday, and Sunday nights and then have him over at Chris's during the day (Chris lives very close to me). I also need to walk and feed him. 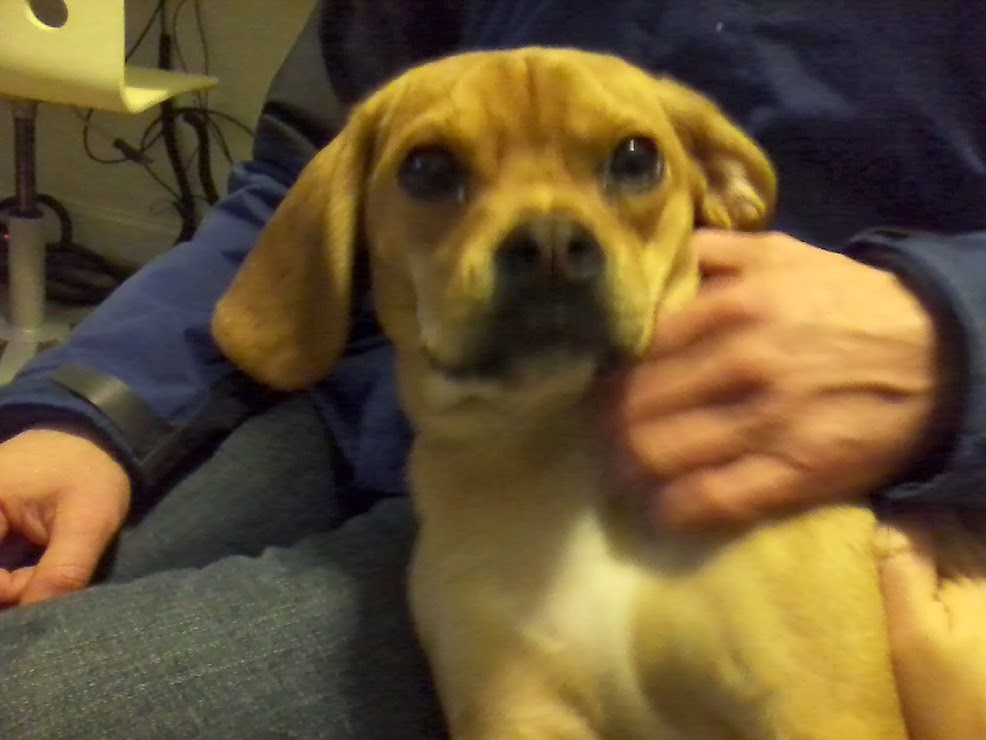 Brady the adorable puggle as seen in Chris's apartment on December 30, 2013.
All together (to the tune of Frosty the Snowman):


My only concern is that he hasn't told (for the usual reasons) the person watching Brady on Thursday and Friday -- a bartender friend of his (let's just call him Popeye) who is part of the D.C. Gay Mafia. As such, I don't get along with him, and I'm concerned that if Popeye the Barkeep-Man isn't expecting me, he may show up when I'm at Chris's place (I have a key) and attack me because I freak him out by being there. As it is, I'm planning on splitting Brady's time between Chris's apartment (during the day) and my apartment (at night).
Speaking of Popeye the Sailor, all-together now: 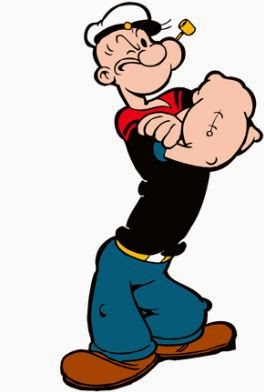 "I'm one tough Gazookus
Which hates all Palookas
Wot ain't on the up and square.
I biffs 'em and buffs 'em
And always out roughs 'em
But none of 'em gets nowhere.

"If anyone dares to risk my "Fisk",
It's "Boff" an' it's "Wham" un'erstan'?
So keep "Good Be-hav-or"
That's your one life saver
With Popeye the Sailor Man.


Oh, yes, while I was at D-I-K bar, Brett showed up, and we had a lovely conversation. She's such a wonderful person. We talked about the great Ma Bell (specifically, one of "her" many Baby Bell offspring that figured prominently into her life), the polar vortex and climate change, and low/misinformation Fox News viewers. Oh, and Glen Campbell's song Wichita Lineman. 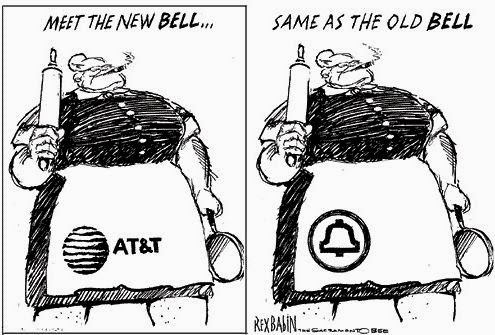 
OK, that's all for now. I'm really tired. I'll get around to posting the Buffalo / Niagara Falls pictures this weekend. As for tomorrow night, I'm meeting a long-ago friend from my (awful) St. Sh!tty's Mary's College days in the early 1990s named Robert. He now lives in Rockville with his wife and young daughter. Robert is from Washington Grove, Maryland ("the city within a forest") and he was the first person ever to tell me about a place in Washington, D.C., called Dupont Circle. We're meeting at Elephant & Castle on Pennsylvania Avenue, at least that's the plan. 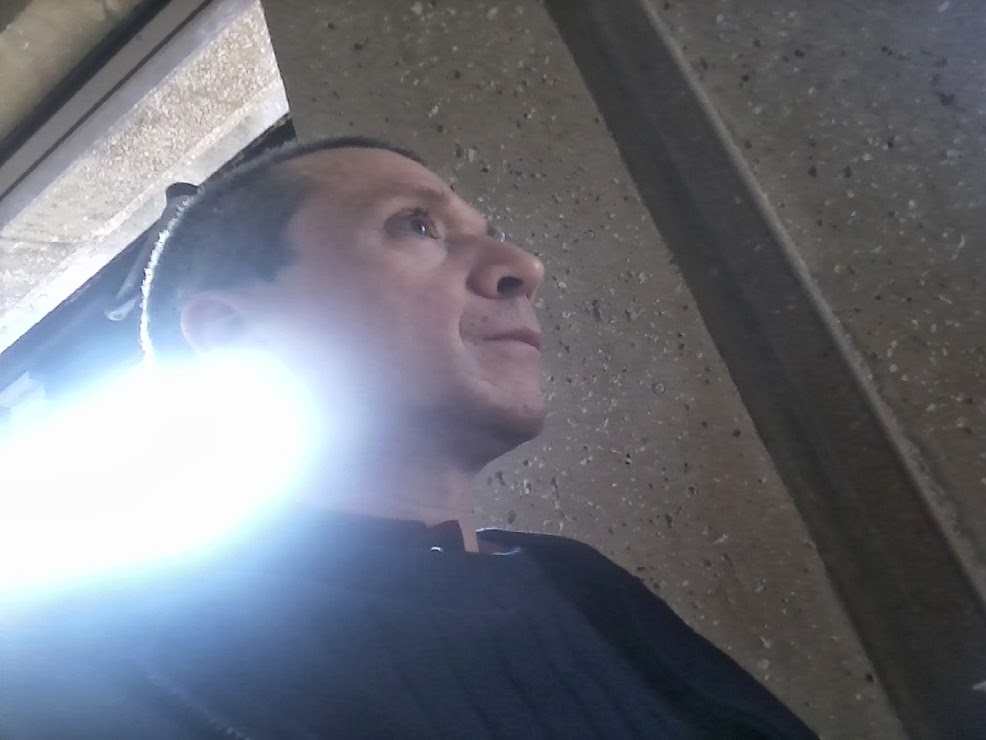 
As for this weekend's would-be big storm, it has almost totally fizzled. Actually, there is a high degree of inconsistency between the operational GFS and ECMWF ("European") models (not to mention the ensembles). The LWX Sterling discussion from earlier this evening states (broken up with some pictures I took with my cellphone camera):
STILL A VERY LOW CONFIDENCE FORECAST FOR THIS WEEKEND. SOUTHERN STREAM TROUGH NOW MORE PROGRESSIVE AND PUSHES COASTAL LOW OFFSHORE THE MID ATLANTIC ON THE LATTER HALF OF SATURDAY. STILL SHOWING AN INVERTED TROUGH FEATURE MOVING THROUGH OUR REGION SATURDAY WITH WEAKER VORT MAX PHASING WITH SOUTHERN STREAM LOW. THIS WAVE WILL BRING THE CHANCE OF LIGHT SNOW SATURDAY. 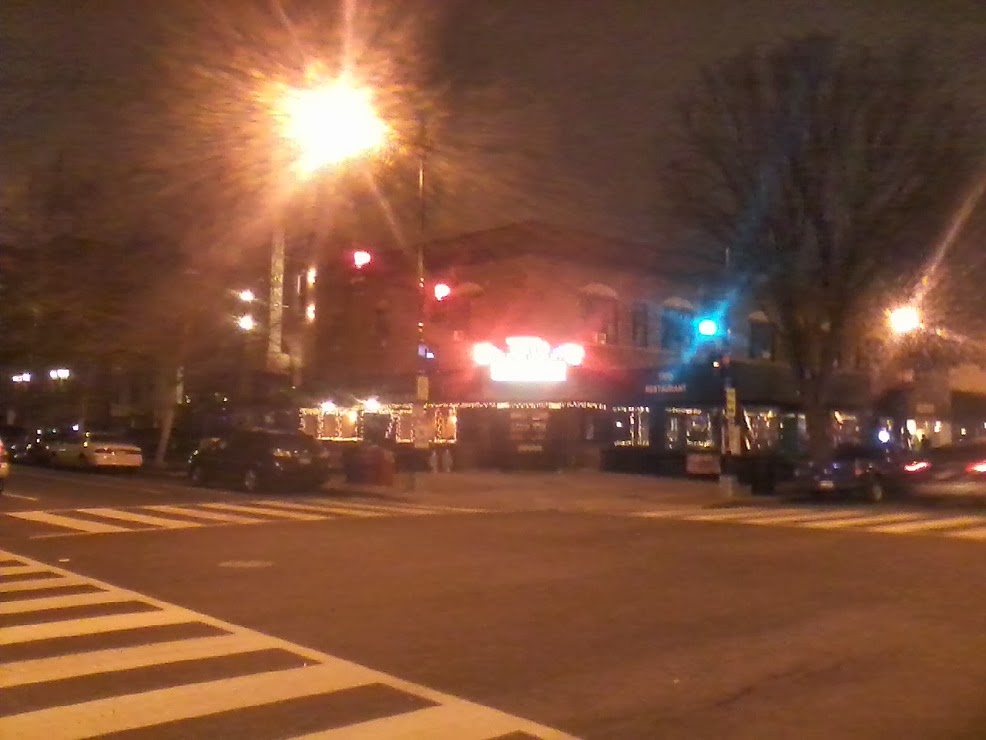 
THEN AS POTENT NORTHERN STREAM VORT ROTATES AROUND THE FRONT SIDE OF THE UPPER TROUGH...A SECOND ROUND OF SNOW LOOKS POSSIBLE ON SUNDAY. ECMWF AND GFS VARY ON THE STRENGTH AND TRACK /WITH GFS FARTHER NORTH/ OF THIS SECOND VORT MAX. Looking to the southwest "down" New Hampshire Avenue from R Street (toward Dupont Circle), Washington, D.C., on a drizzly / showery night, 10:21PM February 4, 2014.
It had started precipitating at this point with a mix of light rain and light freezing rain, but it changed quickly to all rain.
*******


PHASING...TIMING...AND STRENGTH OF THESE SYSTEMS REMAIN TERRIBLY INCONSISTENT AND WHILE MEASURABLE PRECIPITATION /MAINLY SNOW/ LOOKS LIKELY AT SOME POINT...THE DETAILS REMAIN UNCERTAIN. ONE THING THAT IS MORE CERTAIN IS THE COLDER AIR ADVECTING IN FOR EARLY NEXT WEEK WITH BELOW NORMAL TEMPERATURES CONTINUING.
*******


Lastly, read this Jonathan Chait piece: Obamacare, Jobs, and 'What Matters Politically'. Just read it.
OK, that's all for now. My next planned update will be on Friday night or perhaps on Saturday during the day.
--Regulus
Posted by Regulus at 1:51 AM