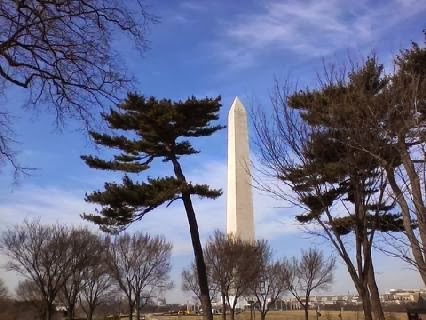 The Washington Monument framed by two evergreen trees, Washington, D.C., 11:32AM February 11, 2014.
I took this picture and the one directly below riding my bike to work yesterday (Tuesday). Yes, the Monument is now mostly free of scaffolding (except for the bottom quarter or so behind the tree in this image).
*******


OK, just a quick update to note that it is snowing across the entire Metro D.C. area as powerful storm system centered over northern Florida begins to transfer its energy to a coastal low developing off Wilmington, N.C., while an Arctic high -- now centered near Yarmouth, N.S., and moving away -- ridges down across New England into the mid-Atlantic region on the lee side of the Appalachians. (Of note, the storm is hitting midweek rather than the seemingly usual 2AM on a Saturday.) 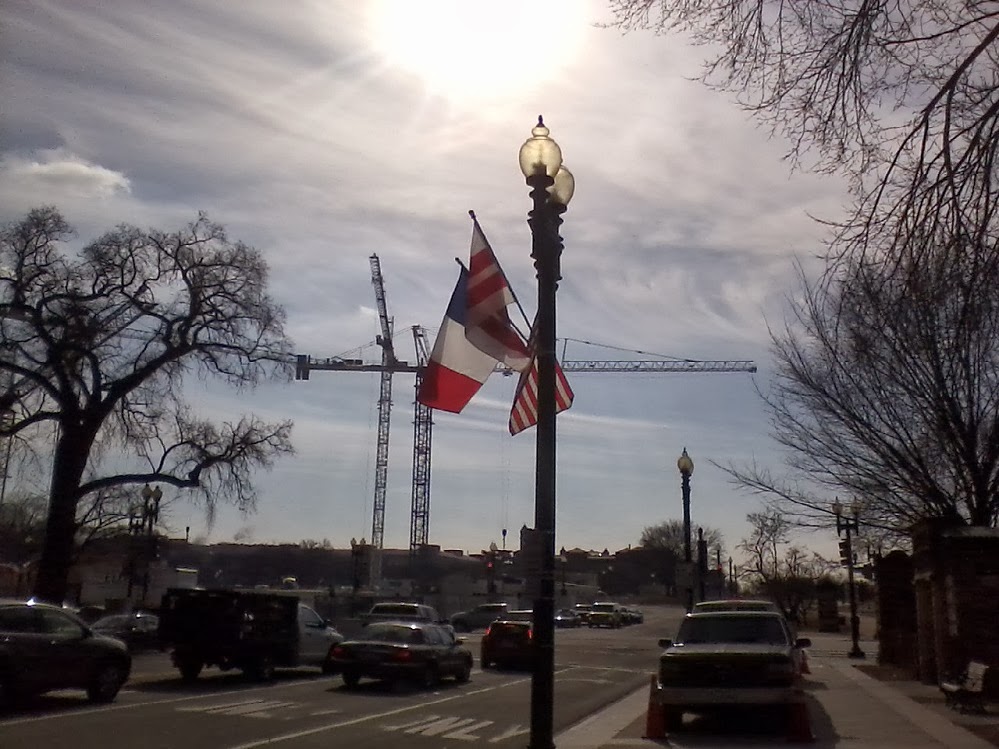 Three flags -- that of the U.S., France, and District of Columbia -- along 15th Street near Constitution Avenue, Washington, D.C., on a bright winter's late morning, 11:28AM February 11, 2014.
The President of France François Hollande was in town and all along 15th Street and Pennsylvania Avenue lamp posts were festooned with a trio of these flags.
*******


Snowfall started in the District around 6:45PM and has been mostly light but radar trends indicate heavier snow now entering the immediate area. Heavy snow has been falling across North Carolina and parts of Virginia since afternoon while a crippling ice storm afflicts parts of South Carolina and Georgia including the Metro Atlanta area. 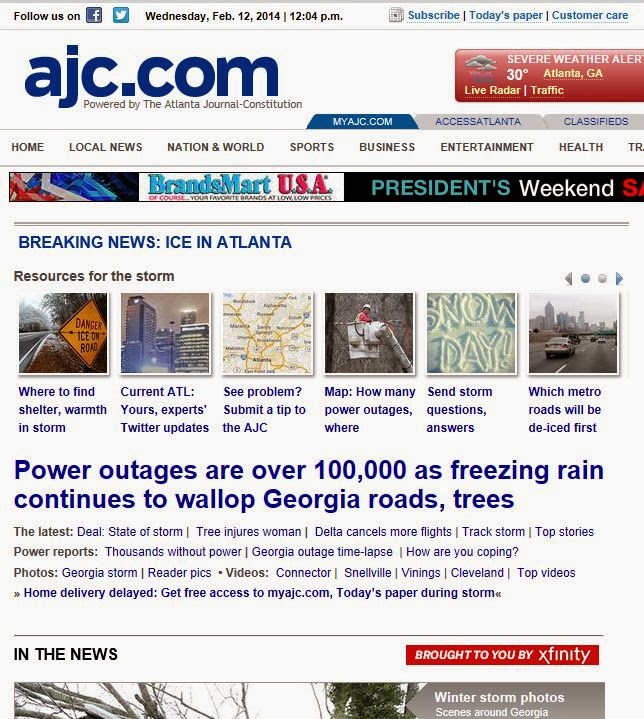 This was the headline of the online Atlanta Journal-Constitution at 12:04PM today (2/12/2014) concerning the ice storm afflicting the Metro Atlanta area.
It looks like Atlanta proper had more sleet than freezing rain, which is good since the ice accretion in a densely populated area was less.
*******


Heavy snowfall approaching 2 inches per hour is forecasted for the Metro D.C. in the wee hours until dawn, when the snow / mixed precipitation / rain line approaches and crosses at least part of the area, at which point sleet, freezing light rain, or just plain rain are forecasted (the latter especially along the Chesapeake Bay). 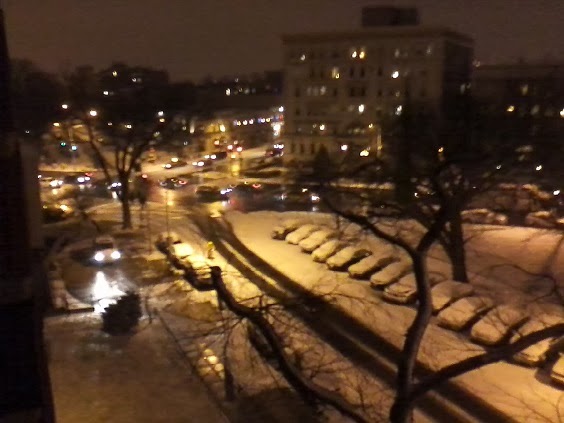 
Exact location of the transition line is uncertain -- and will be dependent on the track of the low and how strong the storm becomes near our latitude. By morning 4 to 8 inches of snow is expected, though it could be more if the new 0Z NAM verifies (see below). 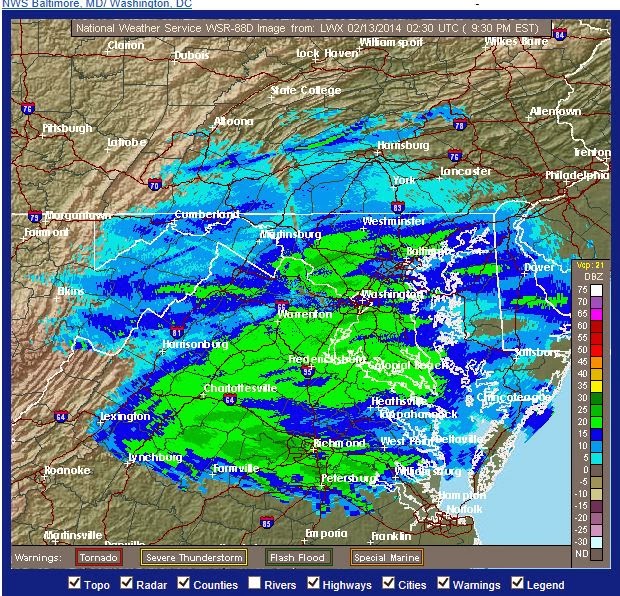 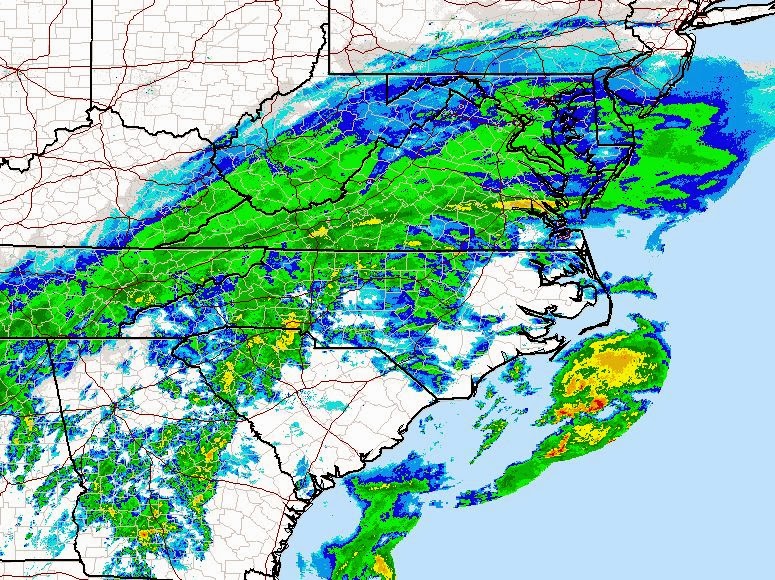 
The storm looks like it will deliver a second band of all-snow tomorrow evening as it pulls away thanks to "trowaling" (precipitation formed by a trowel or "trough of warm air aloft" wrapping around the center of the low). 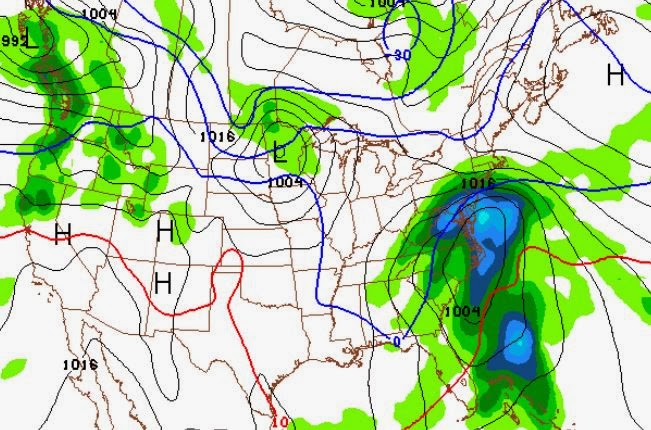 Final snowfall totals may or may not be much more than the 4 to 8 inches inside the Beltway, but 8 to 10 inches and even more for points north and west (14+ inches), though again this remains to be seen. 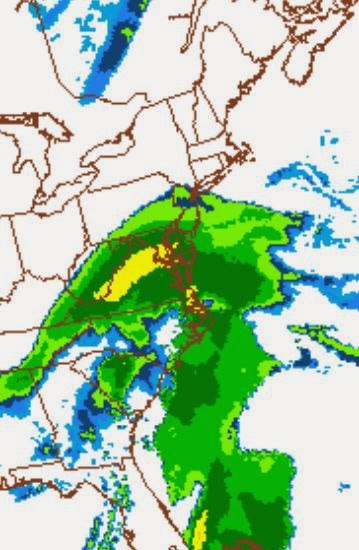 The new 0Z NAM dumps 1.50 to 1.75 inches QPF liquid equivalent, though only partially as snow.

The GFS has been showing less precip through multiple runs.


The 12Z 2/12/2014 ECMWF had more westerly track, i.e., a changeover to rain / sleet, followed by a trowel-induced heavy snow wraparound. For more information, see this CWG entry and the CWG in general.
If the NAM verified, we could get over 12 inches of snow even in the District itself. It comes down to mesoscale features. 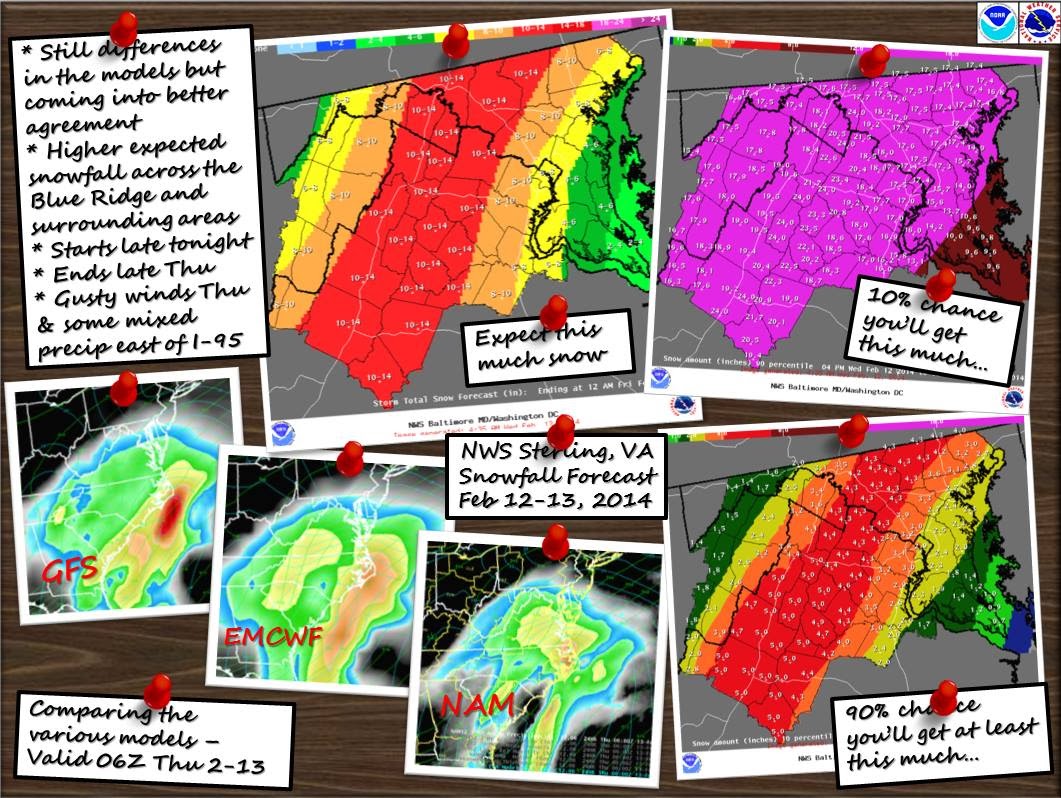 A useful information graphic put out by the Sterling (LWX) NWS office for this storm.
Click on image for larger version.
*******


The storm has altered my night schedule -- extra grocery shopping, no gym, and Gary coming over to spend the night (as he does during our major snow events), though we'll go to Larry's Lounge first. Also, everyone is expecting widespread closures and disruptions tomorrow, and I am planning on teleworking from home. In point of fact, I may work tomorrow night into Friday morning to finish one of the two giant reference sections for the Hawaii report. 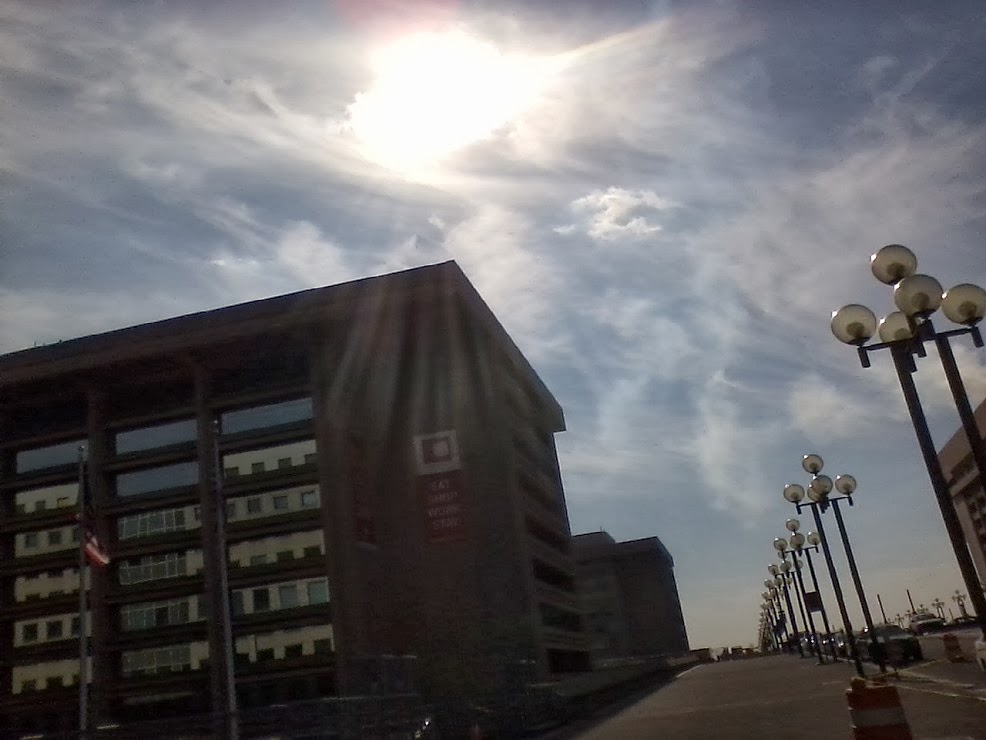 
My next planned update will likely be tomorrow morning.
--Regulus