Washington, D.C., in the Snowy (and Sleety) Wee Hours of a February Night: A Photo-Essay Recap 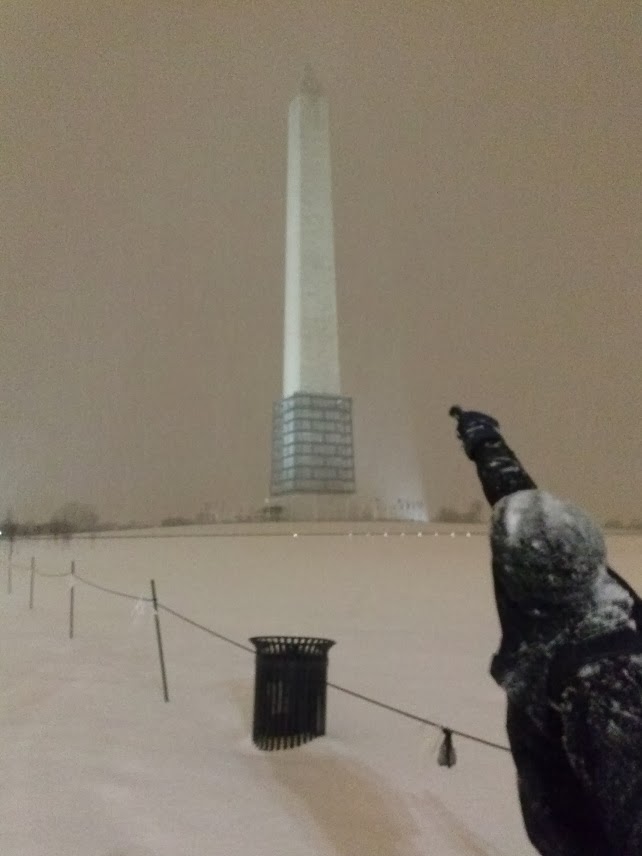 Yours truly near the Washington Monument during the wee hours snowstorm, Washington, D.C., around 4AM February 13, 2014.
You still can't get up close to the Monument as it is still under repairs from the August 23, 2011 earthquake. Most (but not all) of the scaffolding has been removed.
*******


Sorry for the lack of updates today. I am in difficult situation when it comes to blogging today into tomorrow and even though the weekend (see below). However, I managed to compose and post the entry that I wanted. The pictures in this entry are posted more or less chronologically as I took them last night (except for the radar and weather map images). 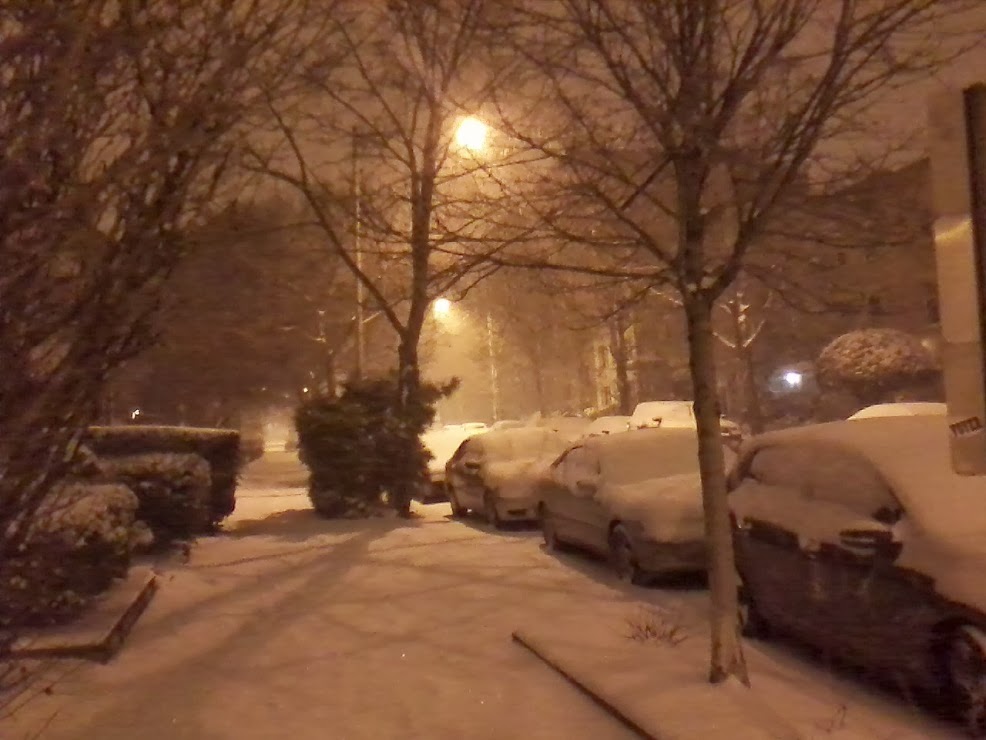 
For starters, I slept all afternoon between 1230PM and 430PM. This followed an abbreviated sleep of only about 4 hours in the wee hours after Gary and I took an approximately 2-hour / at least 4-mile roundtrip walk in the heavy snow and pelting sleet last night down to the National Mall and back to my place, where Gary stayed for the night and left around 1130AM. In the end, we only got about 4 hours of sleep -- hence my need for a prolonged afternoon nap. 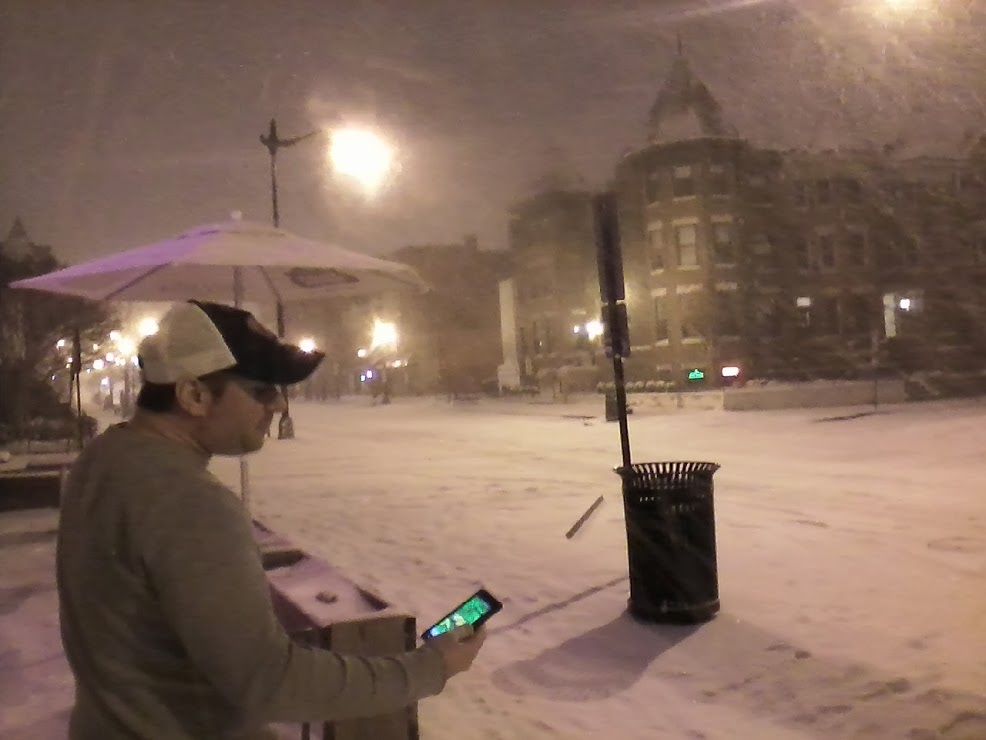 
As for the walk, we trudged through the steadily accumulating snow on the ground that was at least 8 inches by the time it ended around 5AM. This walk, in turn, followed a stint to a packed and raucous Larry's Lounge during which time the snow really intensified. 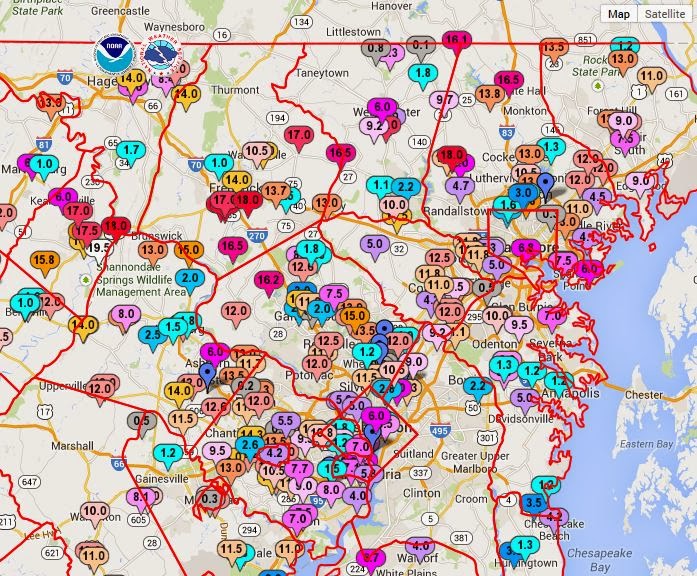 A map of the extended D.C. and Baltimore Metro areas showing snowfall totals for the Feb. 12 - 13, 2014 event through 3:37PM EST 2/13/2014 (so it does not take into account additional snowfall since that time).
This is a slight close-up of the entire LWX CWA map showing snowfall totals. The link with interactive map is here (this link is updated when subsequent winter weather events occur, so it is only valid for a period of time).
******* 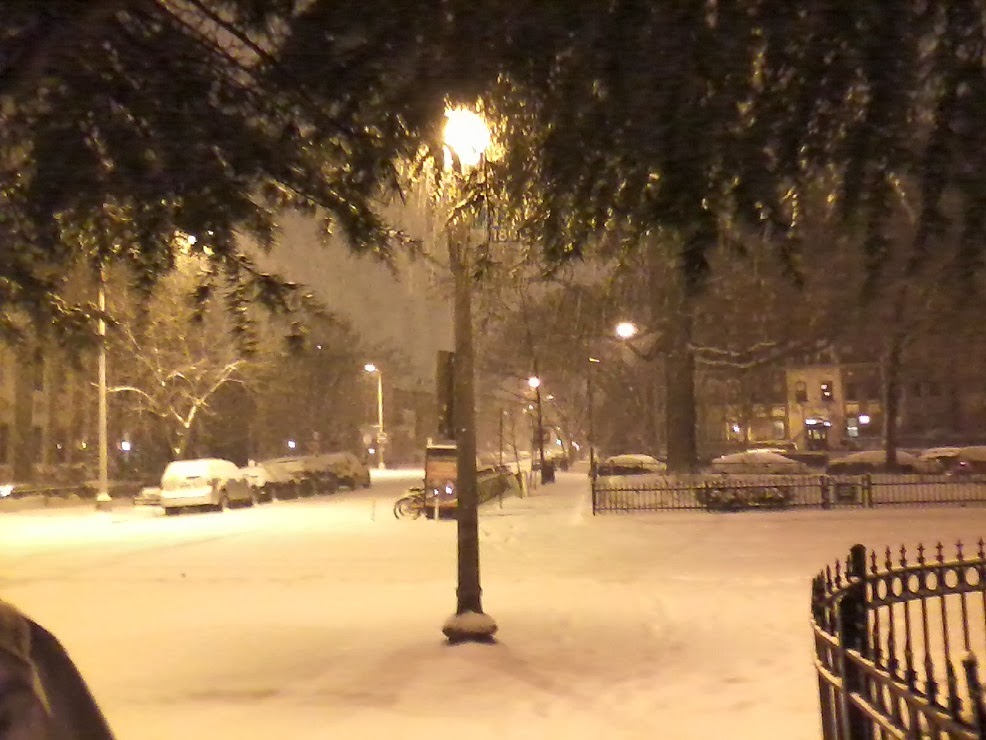 The snowy intersection of T and 17th Streets near New Hampshire Avenue NW, Washington, D.C., 1:51AM February 13, 2014.
This was taken while Gary and I were talking back to my place from Larry's Lounge before heading back out. Of note, I used to live in the building on the right in the distance (the Harrowgate). It was my first residence in D.C. from February 2001 through November 2002.
*******


In brief, there was a widespread 8 to 14 inches of snowfall across the entire extended region including the Metro D.C. and Metro Baltimore areas with amounts ranging as high as 19+ inches in parts of Carroll, Frederick, and Montgomery Counties of Maryland and at least 12 inches in the near-in northern and western suburbs. The highest total I found was 19.1" in Walkerville, Md., though there were a number of 15 to 19 inch reports across northern Maryland.

Here is D.C. where I live, I estimate about 8 to 10 inches of snow fell, though it warmed above freezing today and the snow quickly compacted. 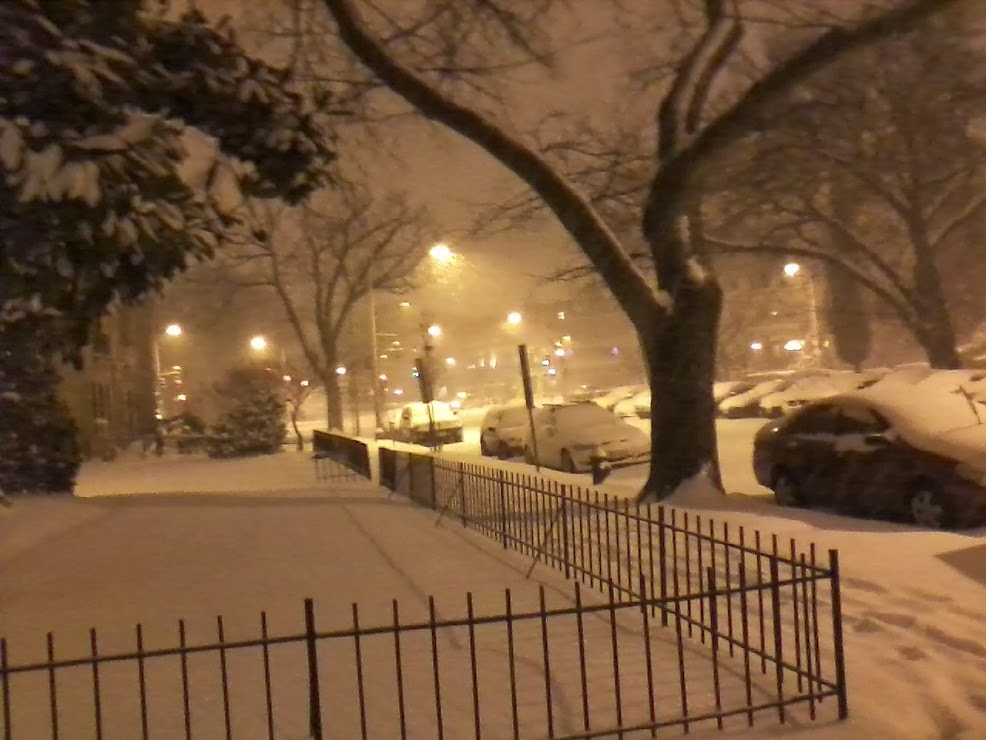 
Preliminarily at the three regional climate stations it looks like the two-day event snowfall totals through 5PM this evening were as follows:
* BWI Thurgood Marshall Airport climate station (KBWI): 10.3 inches. Note that the snowfall report total page gives the KBWI total as 12.3 inches. The above number is taken from adding the two daily climate summaries. The two-day QPF liquid equivalent total was 1.23 inches (through 5PM today).
The KBWI seasonal total is 23.6 inches -- or already 3.5 inches above the current 30-year annual average of 20.1 inches. 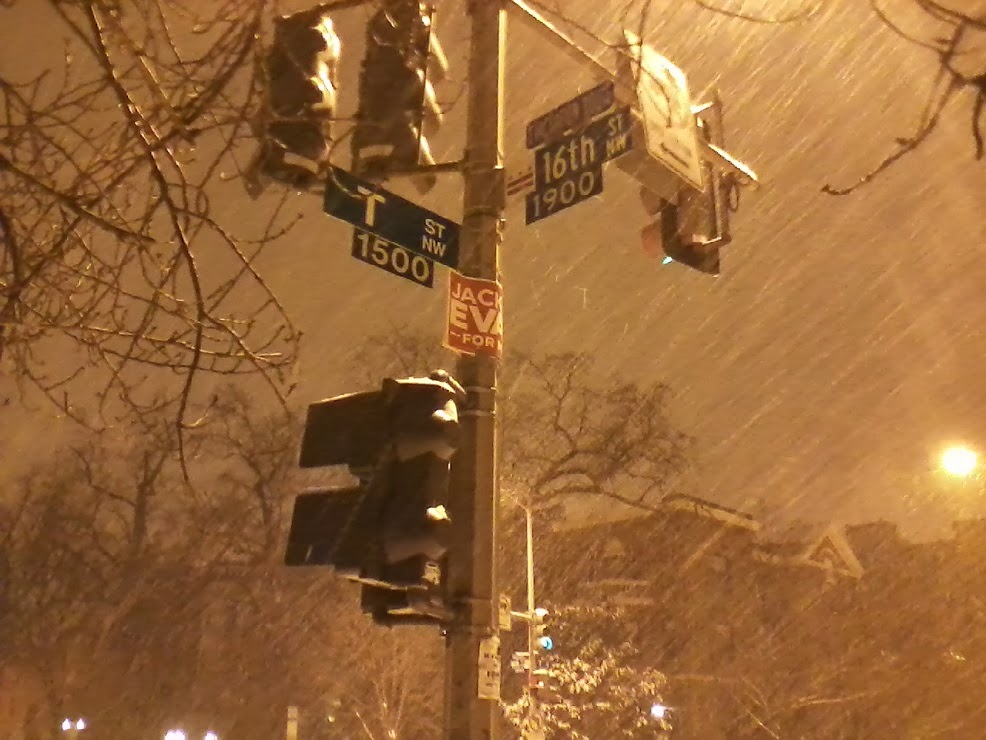 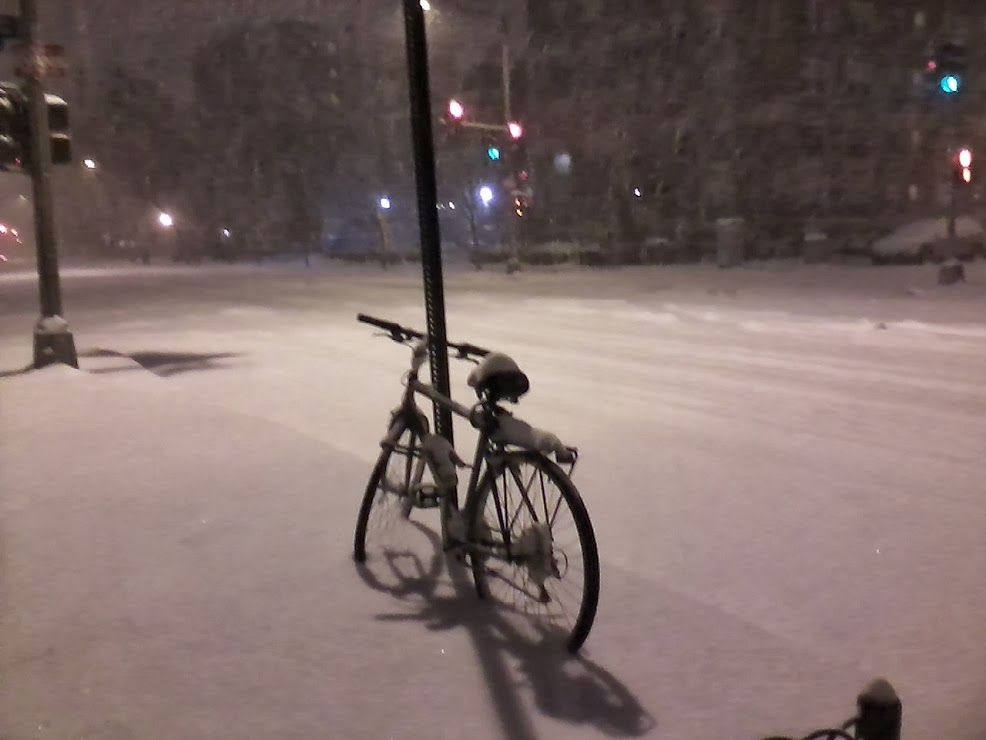 
* Reagan Washington National Airport climate station (KDCA): 6.6 inches. This includes 1.1 inches on 2/12 and 5.5 inches on 2/13 through the 5PM preliminary update. The two-day QPF liquid equivalent total was 1.40 inches (through 5PM today). (The NAM verified in this way.)
The KDCA seasonal total is 14.8 inches of snow -- or 0.6 inches shy of the current 30-year annual average of 15.4 inches.
NOTE: ** All these numbers will increase slightly once the final 2/13 climo summary comes out after midnight.**
Updated 11:33AM 2/16/2014: The final storm event snow totals for the three climate stations were as follows (with the 12th and 13th daily amounts as well): 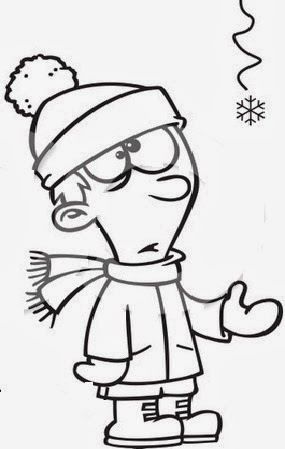 The KDCA and KBWI daily totals for the 13th were easily surpassed by the snowfall amounts in 1899 (from the pre-airport period). As for 1899, now THAT was a cold and snowy winter. 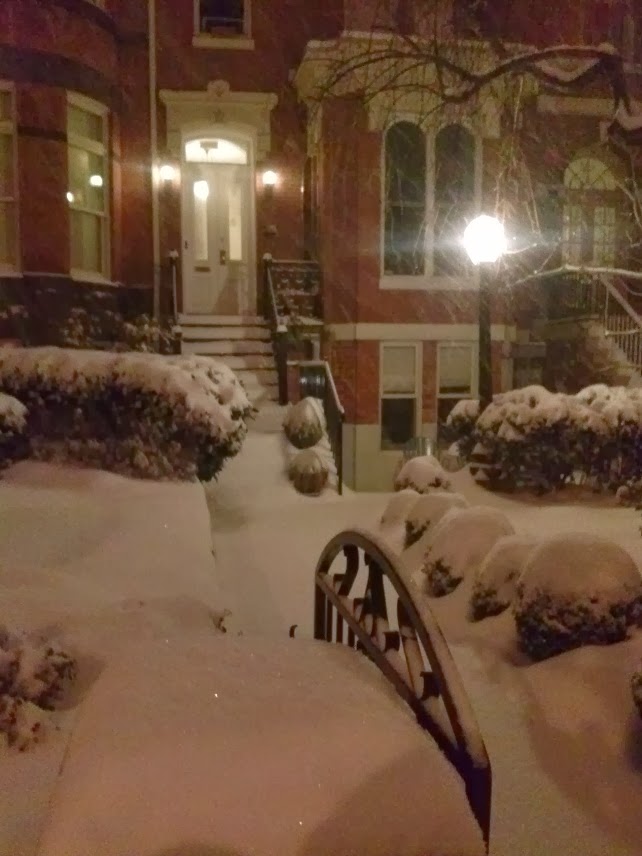 
Oh, yes, the Capital Weather Gang has opted for the name "Snochi" for this storm in honor of the ongoing Winter Olympics in Sochi in Russia (where, incidentally, it has been unusually warm). (The Weather Channel's widely derided naming system called this storm "Pax.") 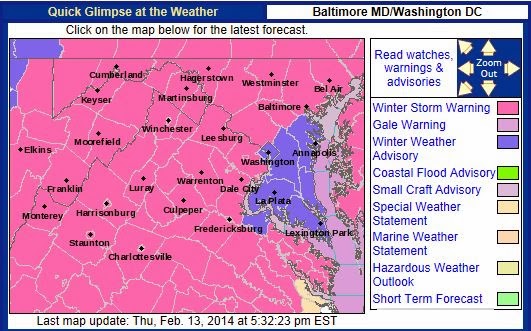 Sterling (LWX) county warning area (CWA) weather advisories as of 5:32PM February 13, 2014.
D.C. and Prince George's, Anne Arundel, Charles, Calvert, and St. Mary's Counties are in a winter weather advisory while the rest of the region -- including the counties on the Northern Neck of Virginia -- are still in a winter storm warning.
*******


Right now (5:30PM) another batch of moderate to heavy sleet that possibly turns to accumulating snow -- anywhere from 1 to 4 inches area-wide -- is moving into D.C. as the energized upper level low swings by (almost overhead). The District and points south and east are under a winter weather advisory while the rest of the region remains under a winter storm warning. 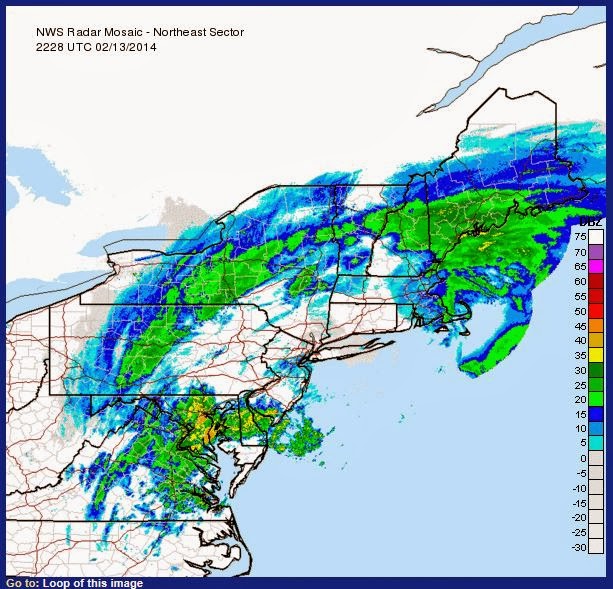 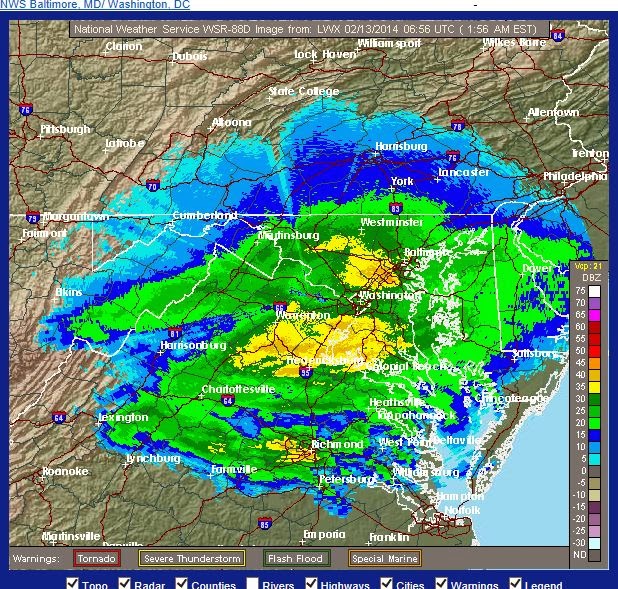 The LWX NWS radar in base mode reflectivity at 1:56AM February 13, 2014 during the height of the intense snow and sleet last night over the D.C./Baltimore area.
******* 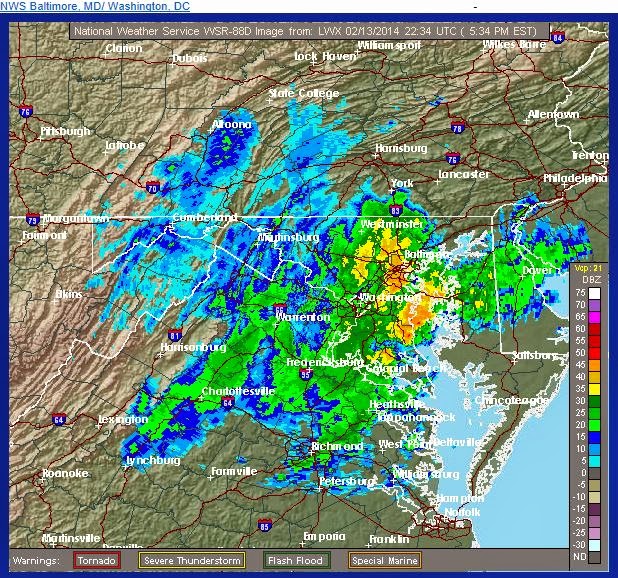 LWX radar in base mode reflectivity at 5:34PM EST Feb. 13, 2014.
The radar loop shows the different elements of precipitation appearing to be moving in opposite directions along an axis nearly over D.C. -- telltale evidence of a deformation zone.
*******


Looking ahead, another system is progged to move across the region Saturday evening and it may bring a widespread 1 to 3 inches of snow. (This follow-on second system would be in keeping with similar secondary smaller systems that have often occurred in the 24 to 72 hours after a major D.C. area snowstorm. I realize this is anecdotal on my part, but I recall a number of such instances over the decades following a big snow event.) 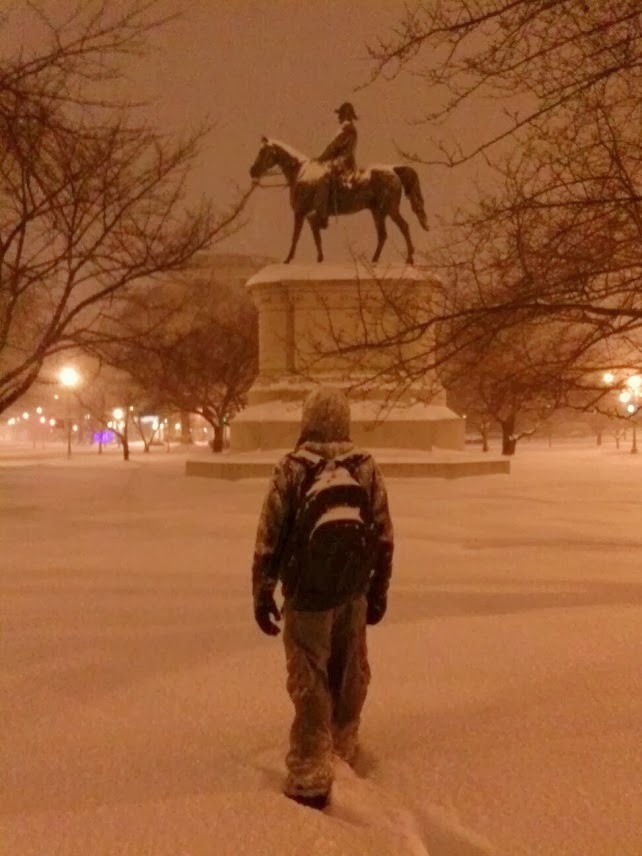 Yours truly at Scott Circle in the snowy night, Washington, D.C., around 3AM February 13, 2014.
Gary took this picture and the other larger ones and I'm not sure of the exact time. Also, it was still just snowing -- it hadn't started pelting sleet yet.
The equestrian statue is of Brevet Lt. General Winfield Scott, a U.S. Army General in the 19th Century who apparently ran as a Whig presidential candidate in 1852.
*******


OK, I'm going to wrap up this entry in a bit. As for additional blogging, I may not be able to do more than a minimal amount of it (and I really mean that) between now and Tuesday (Feb. 18th). This is because I am in a difficult situation in which the demands of work -- specifically, to finish the enormous task of citing and referencing in the giant Hawaii project -- must take precedence. 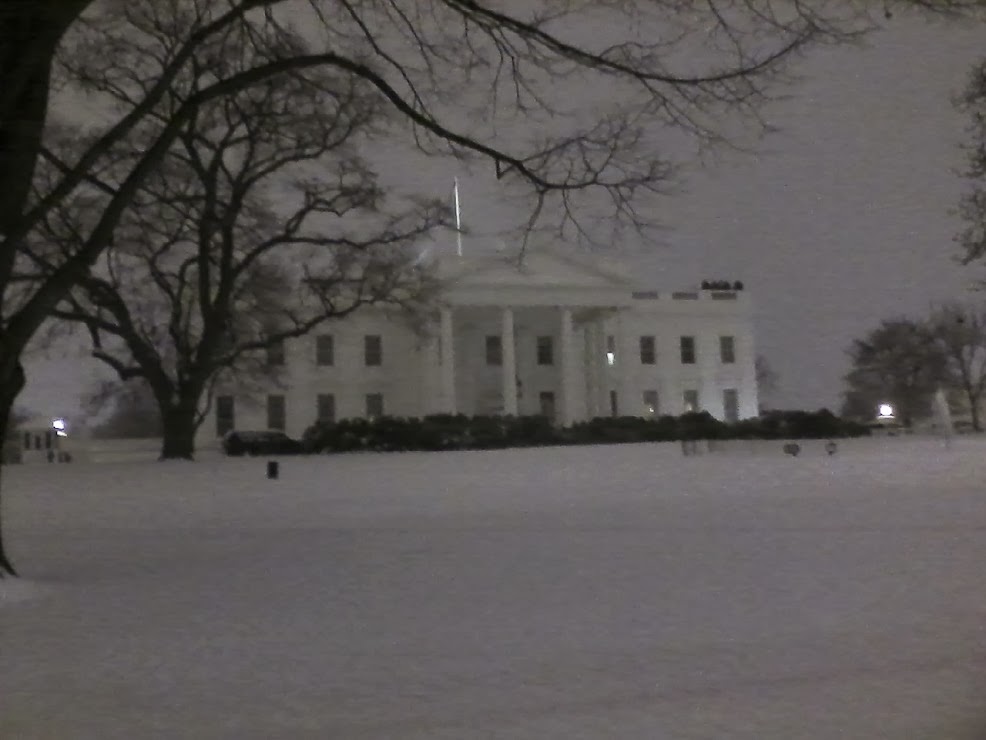 More immediately, I have to complete by early afternoon tomorrow the reference related work in one of the two approx. 300 page chapters by tomorrow afternoon before starting on the second one. This work is even interrupting my plans to go to the gym tonight. Instead, I am going to do an all-night work-from-home marathon session to finish it up. 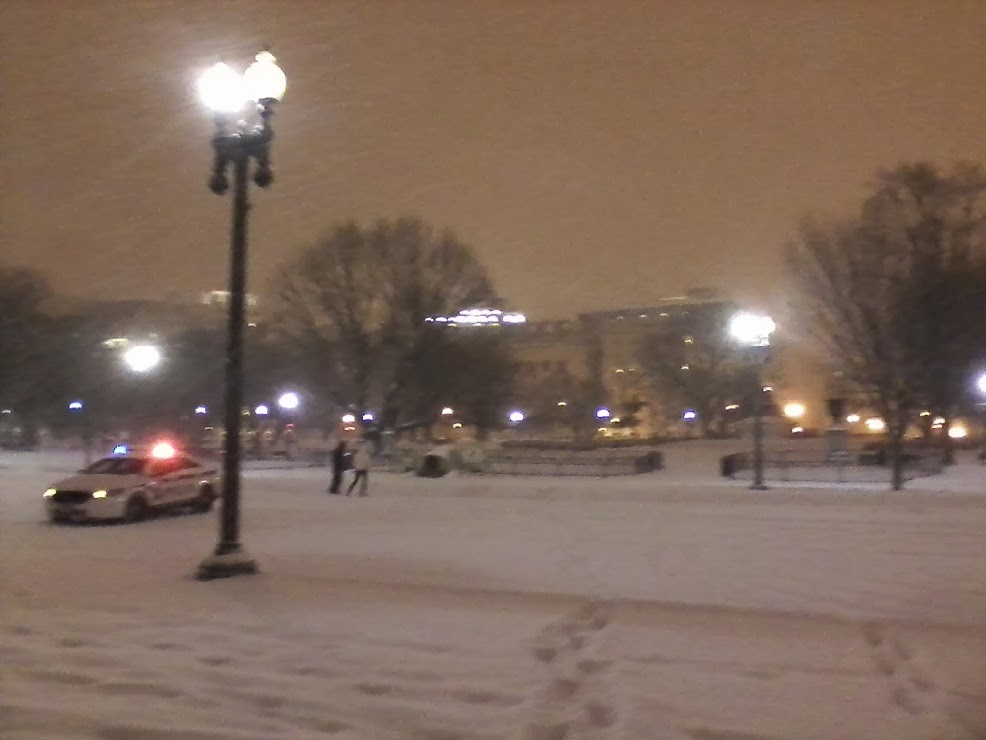 
I was going to go to D-I-K restaurant for dinner but Chris isn't working there, so I may go to Trio instead. My aim is to start working by no later than 11PM and just go through to mid-morning tomorrow to complete the remaining 23 pages of references. This includes proper citation / call out in the actual ~300 page chapter, which in turn often requires a kind of technical edit to check that it is in fact the proper reference. 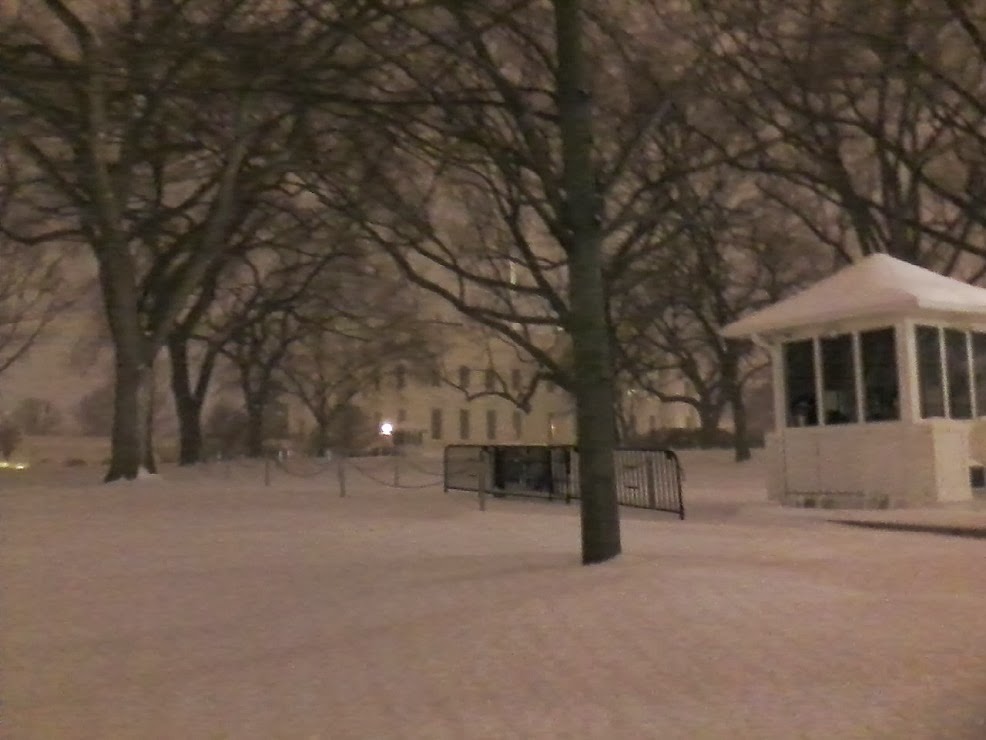 
This is all necessary because the sprawling chapter was written by ten different authors, each of whom used their own references and call outs -- with duplicate citations cited in all kinds of ways, some of which are identical to other references (i.e., DOE 2013a in one section is DOE 2013c in another while in yet another DOE 2013a actually is an entirely separate one -- and now do this 452 times for approximately 250 distinct references, and it becomes like a 5,000-piece jigsaw puzzle of a blue sky. 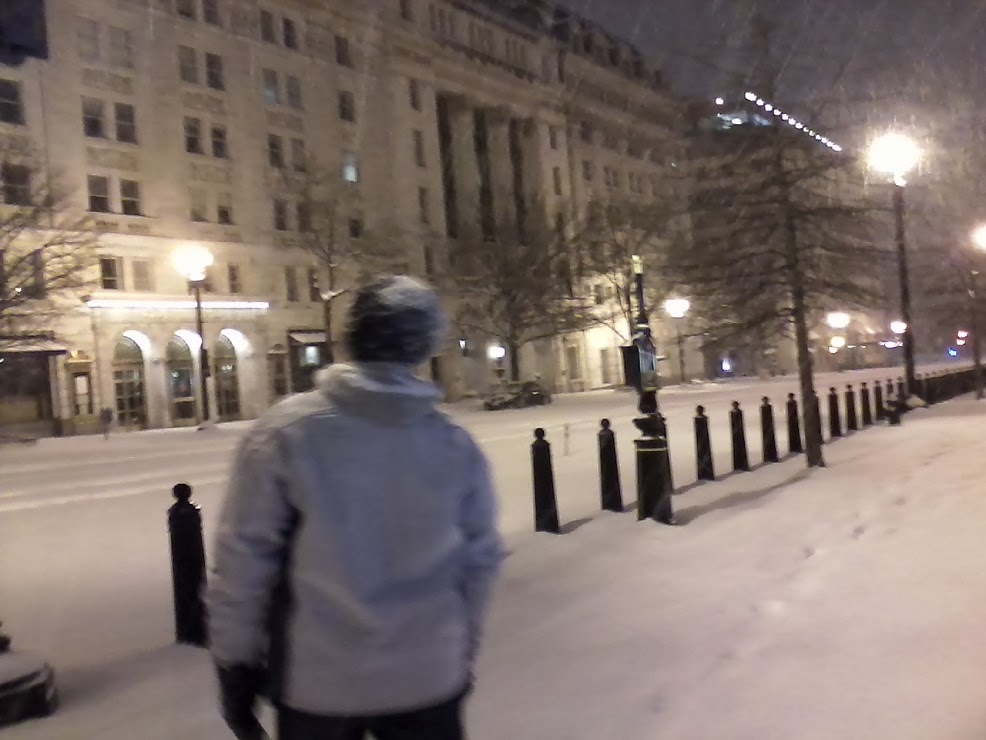 
Of note, as I write this (6:48PM), it is snowing heavily again here in D.C. as the actual upper level low swings through and there appears (based on radar trends) to be a deformation zone right overhead. Even a half hour of this should boost KDCA's total to get us up to  and at least a tick over the 15.4 seasonal average, and if it doesn't happen tonight, then Saturday's event should do it. 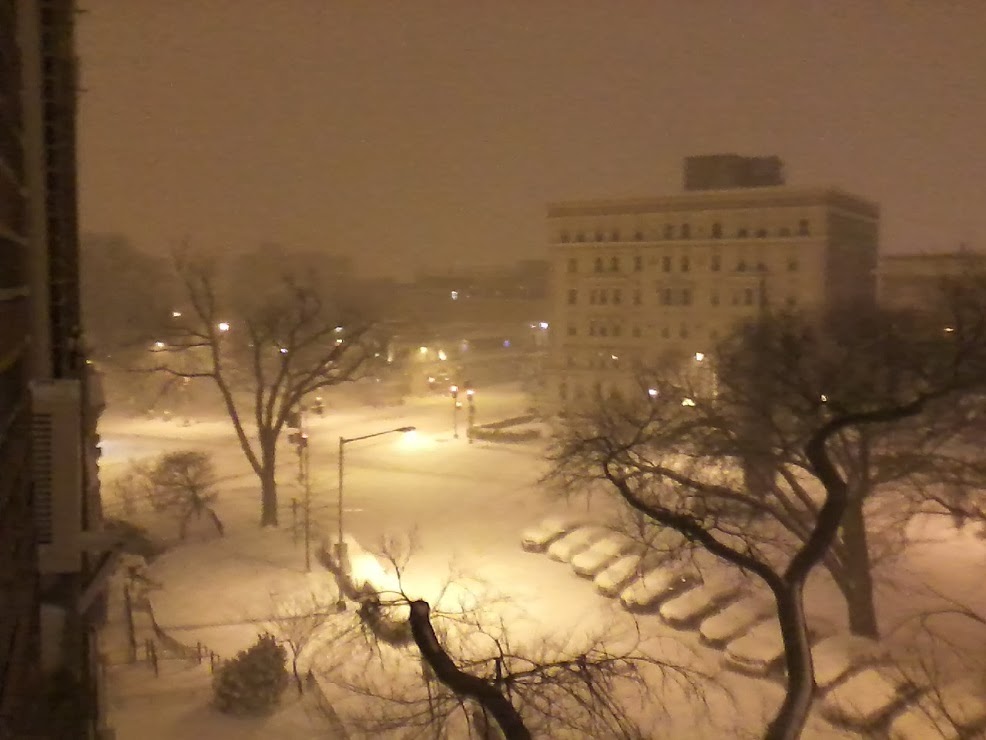 One final picture: The view (familiar to my regular readers) from my 5th floor Hampton Courts apartment overlooking New Hampshire Avenue at the intersection of 16th and U Streets, Washington, D.C., except in the wee hours during a snowstorm at 2:26AM on February 13, 2014.
This was taken during our stop at my apartment right before the walk photo-essayed in this entry.
*******


That's all for now. Again, I may not have an update until my jukebox Saturday night entry (which I intend to post this weekend). I'm unsure when I will be able to post the pictures from last night (let alone the Buffalo / Niagara Falls trip pictures).
-- Regulus
Posted by Regulus at 8:09 PM