The Start of My Very Brady Weekend (and Some Blogger Housekeeping): A Friday Night Update 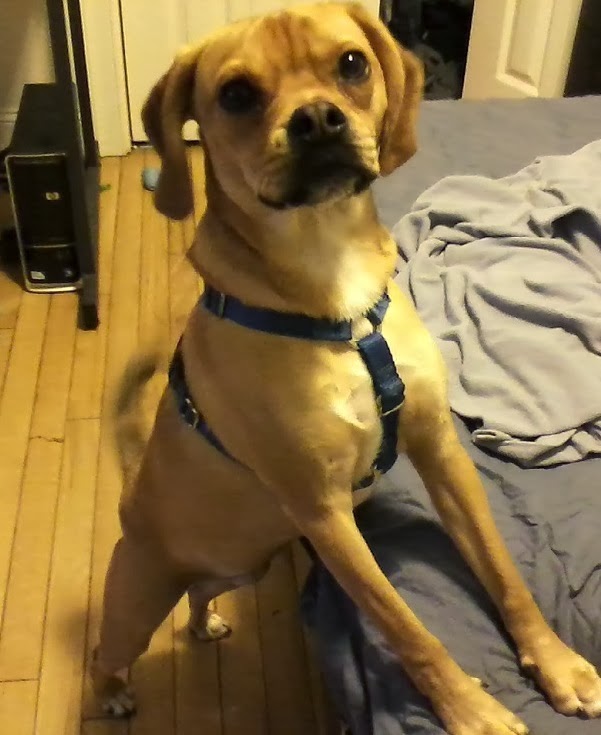 Here is a picture of adorable Brady the puggle last night that I took when I stopped by Chris's place  to check in on him.
*******


This is a highly truncated version of an entry I started composing but just ran out of energy and time to finish, especially on a Friday night as I would like to go out for a bit.
Firstly, I'm home now after a busy day at work and then tending to Brady at Chris's apartment. He didn't really want to go for a walk beyond the yard and instead just peed and pooped there, twice. (Yes, I cleaned up after him.) I'm going to try to bring him to my apartment later tonight (it's quite close -- U and 16th versus T and 16th Street NW). However, I'll have to see if he really wants to stay in his familiar surroundings. This is the first time he has been alone in his young life, and I could tell he was a bit agitated. 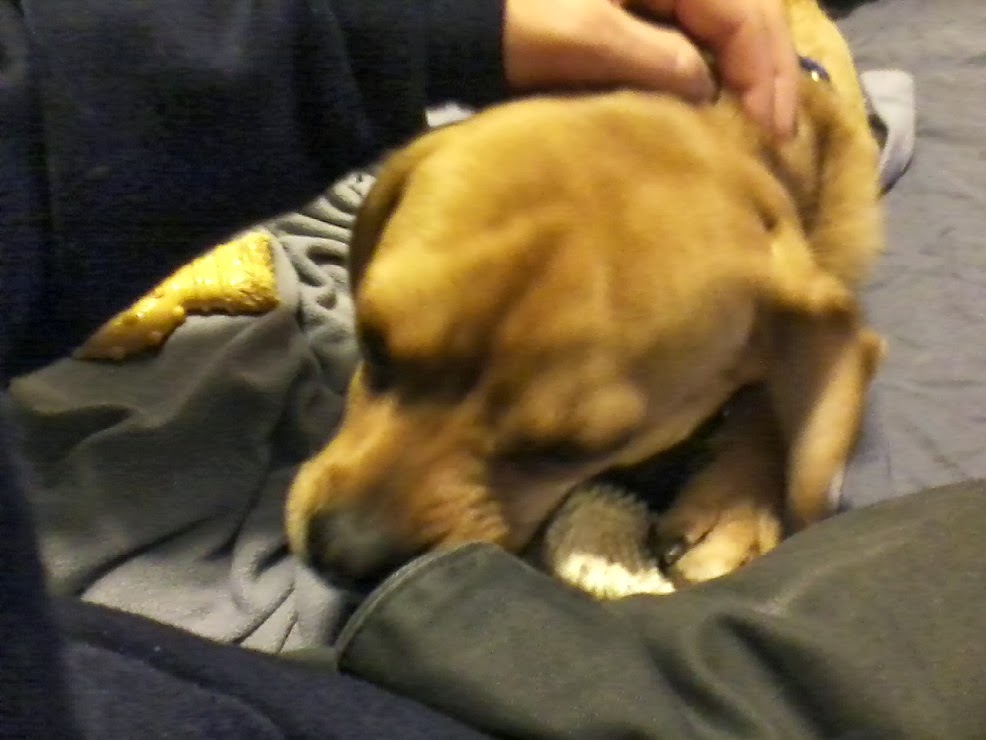 Brady gnawing on a chew toy after his bathroom walk and dinner (in that order) earlier tonight.
*******


My plan is to have him at my apartment during the overnight periods this weekend. I don't want to have him here by himself since I'm not sure how he would react. Anyway, Chris is scheduled to return from his South Florida stint (Miami and the Keys) on Monday evening. 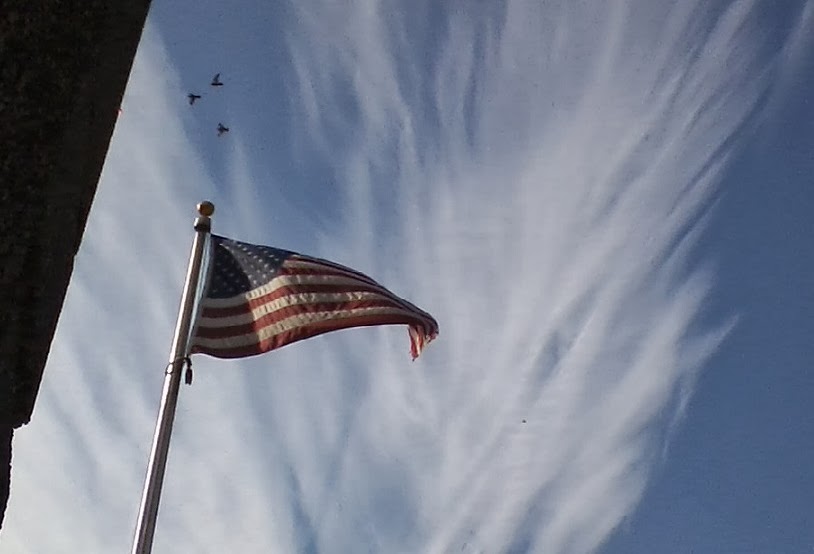 The American flag with three birds fortuitously caught above it and all framed on a blue sky with an exceptionally picturesque cirrus "mares tail" streamer as seen above L'Enfant Promenade outside my office, Washington, D.C., 1:14PM February 7, 2014.
There is a small chance of about an inch of snow tomorrow, but I'm kind of tired writing about failed snow chances and dashed expectations in the winter in Washington, D.C. It gets old.
*******


Secondly, some blog housekeeping: Blogger apparently doesn't work well with Internet Explorer 11 -- you can't upload pictures and the spacing is all screwed up in "COMPOSE" mode. It would render blogging impossible on this my work PC. (I was upgraded to IE 11 yesterday.) However, fortunately, I have Chrome and it still works fine.
Updated 8:50PM 2/8/2014: At this point, the issue with IE 11 seems to have resolved itself enough that I can upload images to Blogger and the formatting isn't all screwed up as it was yesterday. There are still weird error messages, though. 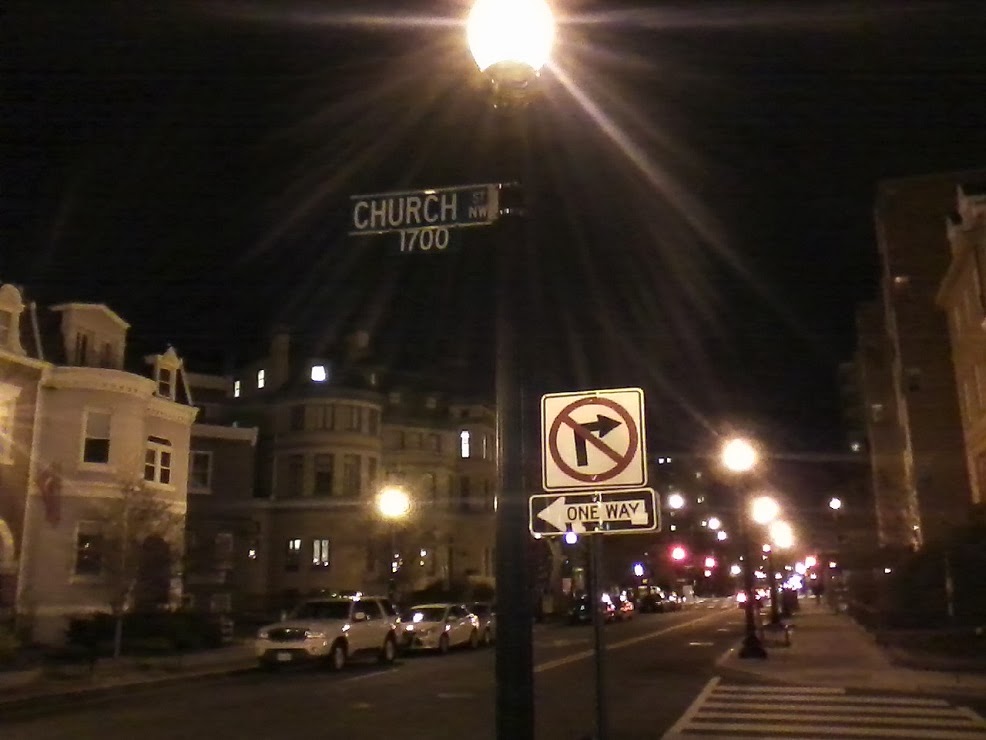 
OK, that's all for now. I'll try to post tomorrow the entry I started earlier tonight. However, I am also backed up on entries including the one of pictures from my Buffalo / Niagara Falls trip. I also need to go to the gym tomorrow and take care of Brady.
As for tonight, my plans fell through so I really don't have anything to do -- so I'll likely just do Larry's Loung and/or No. 9. I don't feel like walking over to Nellie's tonight.
--Regulus
Posted by Regulus at 9:49 PM