Some Sundry Notes from My All-Solo Sunday (Plus Weather Update) 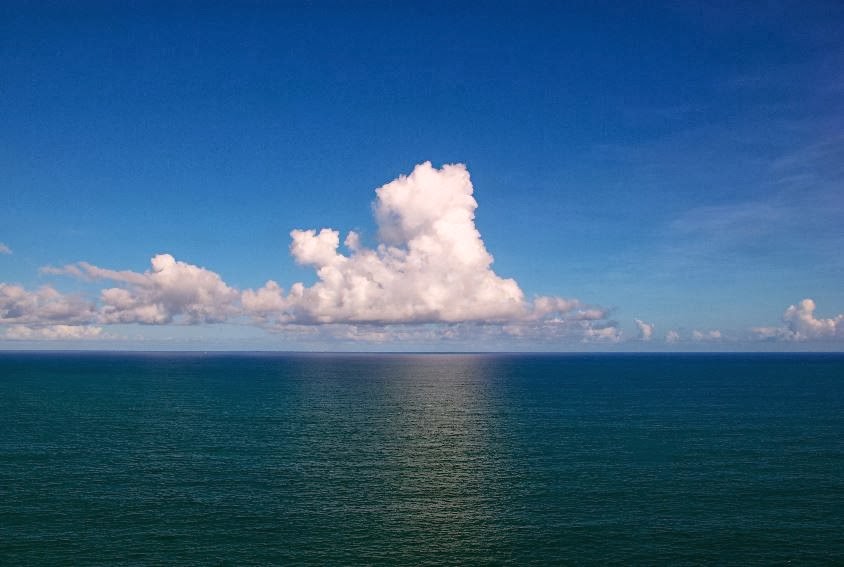 
I'm home alone tonight after spending the whole day alone (except when I was at the gym, but that doesn't really count). I wasn't going to post an update but instead compose the entry with my Buffalo / Niagara Falls pictures. However, I wanted to note a several things ...
First, I had a very good gym workout today at the Anthony Bowen YMCA -- the full jog, weight-lifting, and swim. And my weight was just a tad over 142 pounds, so I haven't gained anything. 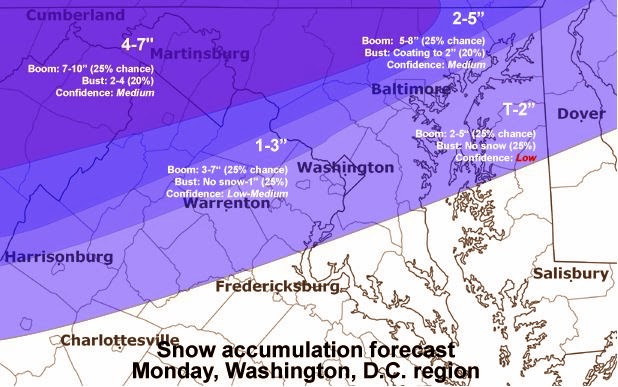 Map (in the above-linked CWG entry) showing snowfall potential in the extended D.C./Baltimore region for February 3, 2014.
*******


Secondly, tomorrow's storm event looks to be mostly just rain in the immediate D.C. area, although it is still forecasted to switch to snow even in the District and perhaps drop 1 to 2 inches of wet, slushy snow. Again, I refer the interested reader to the current CWG entry on the matter (link embedded): Snowy Monday morning for some, but not necessarily everyone. 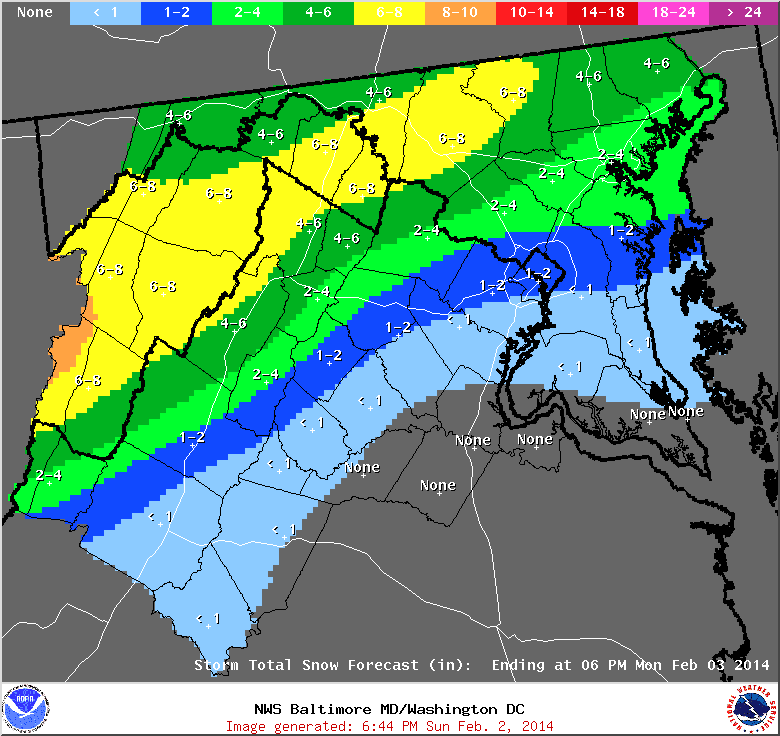 
The Sterling (LWX) NWS "Winter Weather Page" shows quite a range even in the District between the min (0") and max (nearly 8") with the "most likely" in the 1 to 2 inch range here.
The SREF plume diagram of the GFS ensembles have been all over the place. They seem to have limited value in these winter weather events. 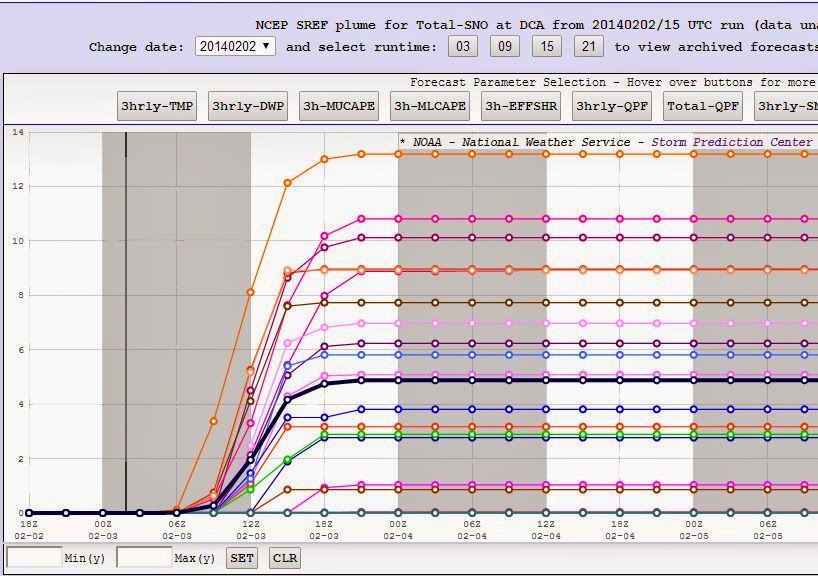 
Tonight is just cloudy and quite mild (temps still around 48F at KDCA at the 11PM hour) and the cold air is only slowly filtering in, so that being the case, the storm would really have to be dynamic to overcome the antecedent warmth. As it is, there are no winter weather-related advisories in effect in D.C. There is a winter weather advisory for Montgomery, Howard, and Loudoun Counties and winter storm warnings to the north and west of these counties including the northern tier of Maryland counties along the Pennsylvania border. 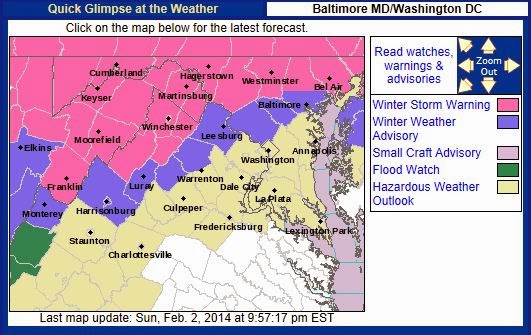 
There is a second storm for mid-week that could be a mix switching to rain. Then the third storm is the biggest -- but that's a full week away and many things can change (even whether there is a complex major storm system involving two lows that affects much of the Eastern U.S. 
OK, I'm updating this entry a few minutes after originally posting it (and not even so noting the update) in order to show the "fantasy panel" from the 0Z GFS for 02/03/2014 that just came out ... 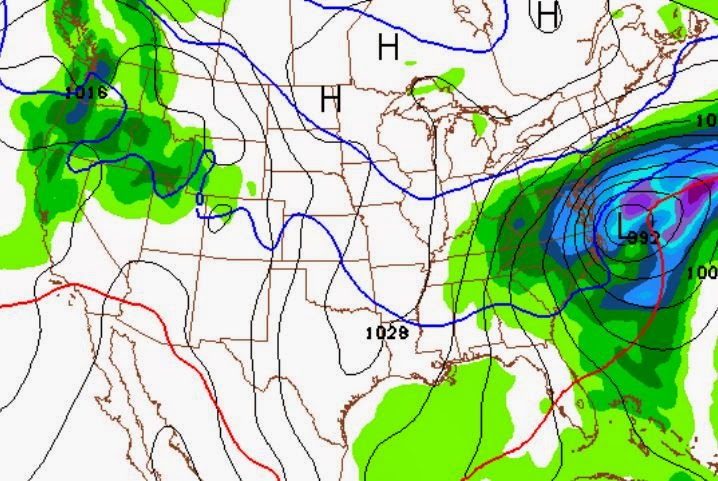 
Thirdly, my night dinner plans with Wendy got cancelled, so I'm just solo tonight. I TRIED to go to No. 9 but even there the Super Sh!tter Bowl was being shown. 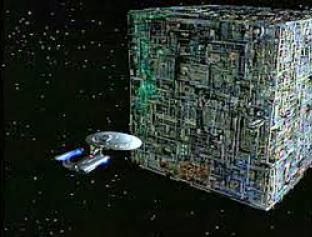 There's just no avoiding that American pop-cultural corporate entertainment monstrosity. It's like The Borg in Star Trek: The Next Generation -- EVERYWHERE. The weird thing is what a weird razzle-dazzle racket everything in America has become. The only way I could avoid it was by staying home.
I should note that Gary invited me along to a house party somewhere in suburban Maryland (Shadyside?) to watch the Super Bowl but I declined the invitation.
******* 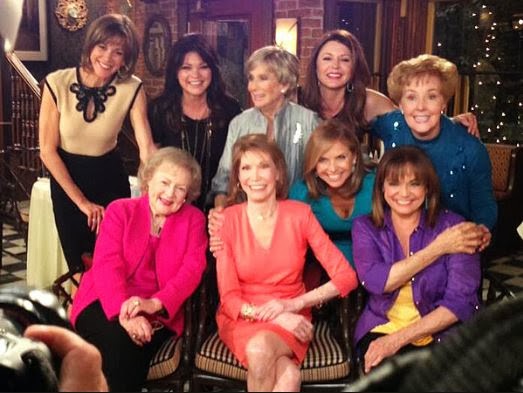 From the People magazine article last April, the caption read: On the Hot in Cleveland set, cast members clockwise from top left: Wendie Malick, Valerie Bertinelli, Cloris Leachman, Jane Leeves, Georgina Engel, Valerie Harper, visitor Katie Couric, Mary Tyler Moore and Betty White
I see that Katie Couric managed to sneak into this picture.
So instead I'm just home now watching an episode of Hot in Cleveland on TV Land. The episode "Love is All Around" featured pretty much the entire female cast members of The Mary Tyler Moore Show. Of note, Ed Asner has also been on at least one episode of Hot in Cleveland, but not this one. Of note, both Asner and Gavin MacLeod are also still alive, as is John Amos. This means the only main character from MTM show to have died is Ted Knight, and he died back in 1986. 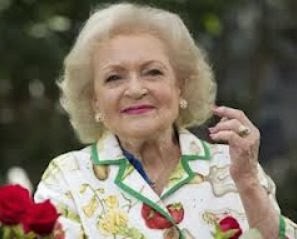 Oddly enough, Betty White looked among the best even though she is the oldest (92). Mary Tyler Moore looked ghastly, but she may be ill. (Valerie Harper, who was also featured, has inoperable cancer.) Later on, TV Land shows some reruns of The Golden Girls, although that network's edits to the show are worse than Hallmark Channel's edits. 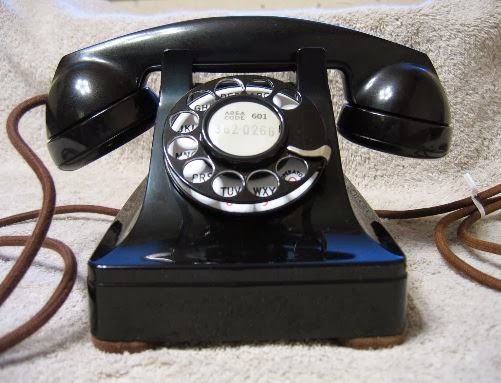 Fourthly, I have decided to get rid of this Smartphone. I simply cannot get used to it, and it's pulling too damn much data all the time. I have the data function off now. Furthermore, I find taking pictures more difficult and cumbersome now (even if the quality is better).


As it is, I have two weeks to return the device (that would be this coming Friday, Feb. 7th). I am going to try to get another flip-open LG Revere 2. I intend to go to the Verizon store on L Street either tomorrow or Tuesday. 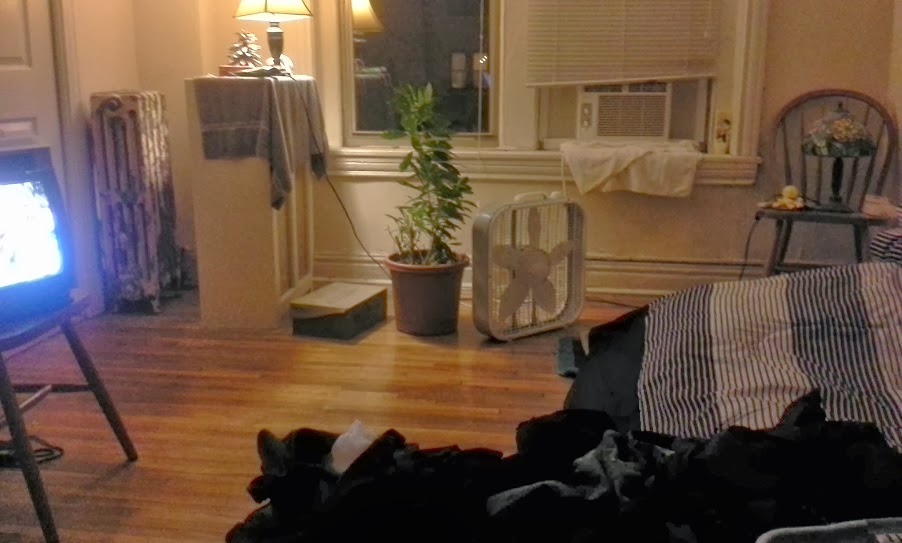 
OK, that's all for now. I actually didn't post this entry until 11:30PM, so my planned composition of the one featuring my Buffalo / Niagara Falls trip pictures will have to wait again. As it is, I've just been watching aforementioned sitcom reruns on TV Land (muting the commercials), and it's kind of cozy in this little apartment late at night (see above picture). I already made dinner, and I'm going to bed shortly and try to have an early arrival at work (at least by my standards) tomorrow. My next planned update will be in a day or two.
Oh, yes, I TOTALLY avoided the Sh!tter Bowl. Now the next unstoppable Sunday night televised hydra to avoid is The Oscars, though I can handle that after a few drinks. It's the same cycle every year (which makes today's Groundhog Day occurrence appropriate, I guess).
--Regulus
Posted by Regulus at 11:31 PM