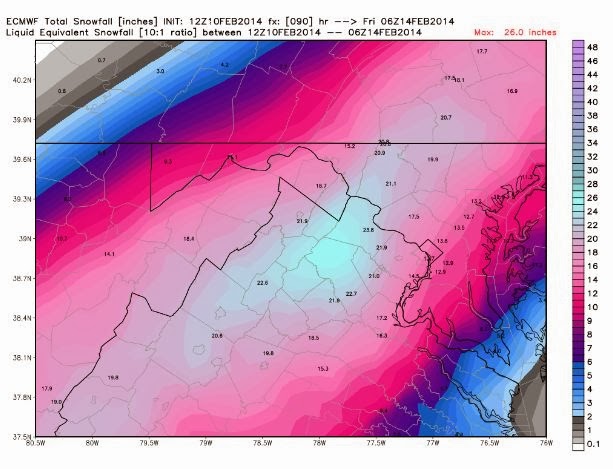 
This is a late-night update, and it features some additional Brady pictures (see below for Brady update). There is much to write, in particular, about the weather, specifically, what could be a major winter storm for the East Coast including an outright snowstorm here in the D.C. area. There is so much to talk about but it's just too late for me to go into much detail. 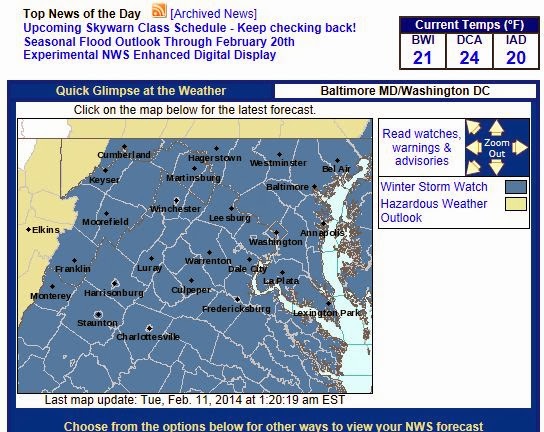 
As shown in the image directly above, the entire Sterling LWX county warning area (CWA) -- that is, the Baltimore / Washington NWS Forecast Office -- is under a winter storm watch for at least 5 inches of snow. The snowfall range on the Sterling LWX Winter Weather Page is quite impressive, specifically, the maximum amount.
As the image directly below shows, the maximum amount presently includes 20.3" at KDCA (an amount that would top the 1979 President's Day Storm) and amounts of 24 to 29 inches in parts of the Shenandoah and Blue Ridge and even as close-in as western Prince William County, Va. 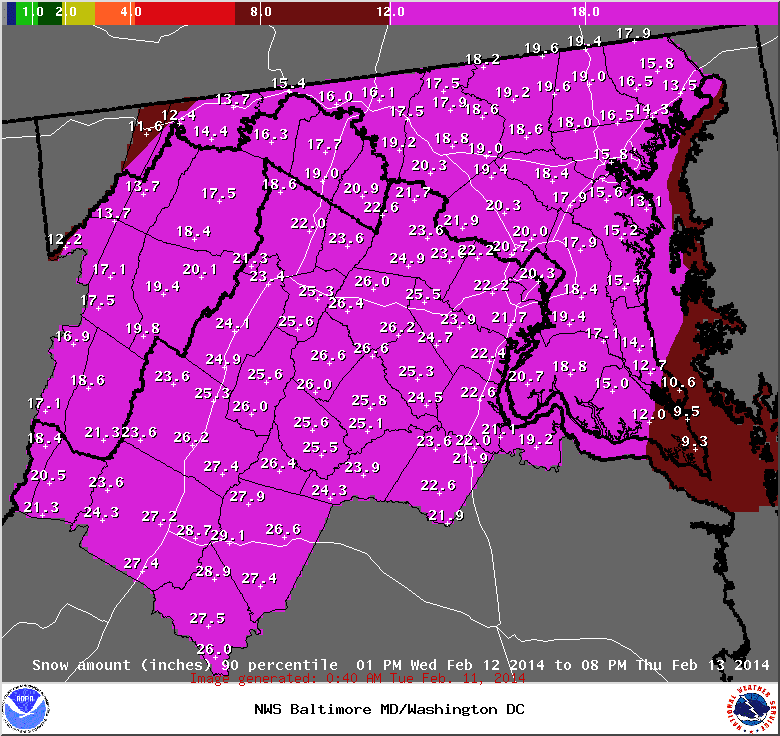 
Even the minimum amountis 1.9" at KDCA -- an amount that is just under the 2" threshold that represented the criteria for the single snow event "snow drought" that lasted about 3 years for D.C. It is shown in the map directly below. 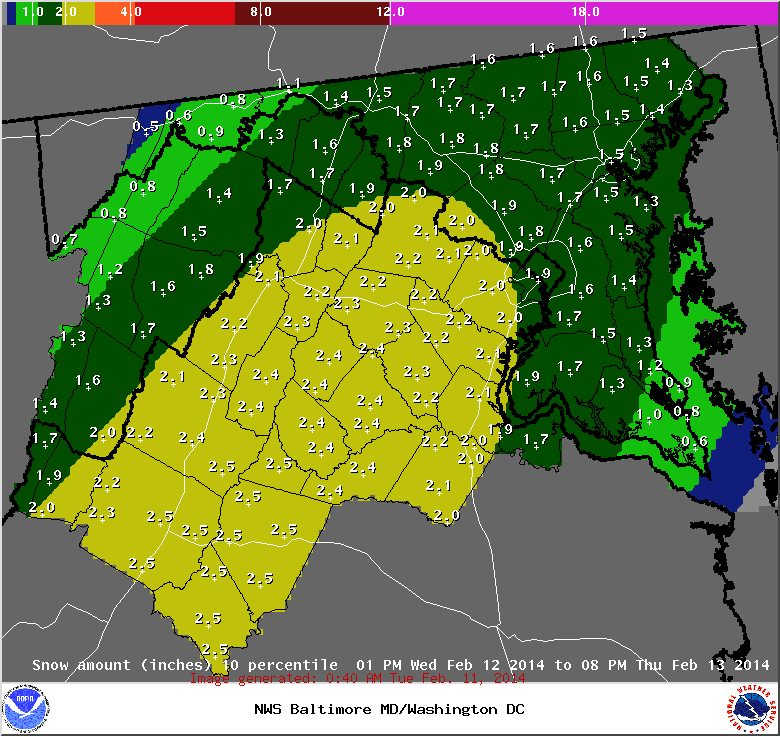 
The "most likely" amount has not been issued since accumulating snowfall is still over 36 hours away. 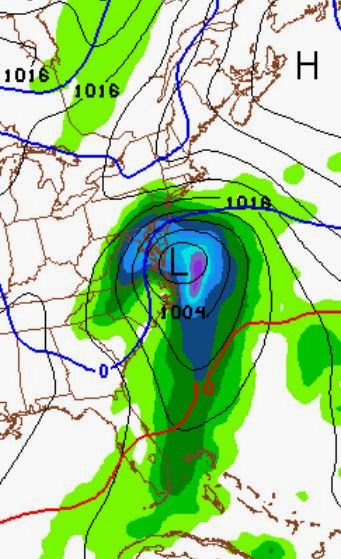 
I'm going to refrain from any detailed discussion of model differences but in short:

* The NAM in its recent runs has showed a very snowy solution with amounts of up to 18" in the immediate D.C. area (though temps in the boundary layer are perilously close to the 32F threshold);


* The 12Z 2/10/2014 ECMWF suggested a snow-to-rain turnover with a stronger storm near the coast, but with totals just west of D.C. reaching two feet;
* The GFS (including the most recent 0Z 2/11/2014) has shown a moderate snowfall event in the 4 to 8 inch range.
The Capital Weather Gang has had some detailed explanations with lots of colorful maps of the model output as prettied up by WeatherBELL.com and other outfits. Oh, and the comment sections are going wild. (D.C. is really a weird place for so many things -- and even the weather is hyper-political and everybody is an expert.)
Entries of note in the past 12 hours (links embedded):

I'm going to leave the discussion as is for now since these winter weather dramas in D.C. are quite emotionally draining and exhausting, especially given how these passion plays usually end in a tragedy-to-farce denouement. Great word. 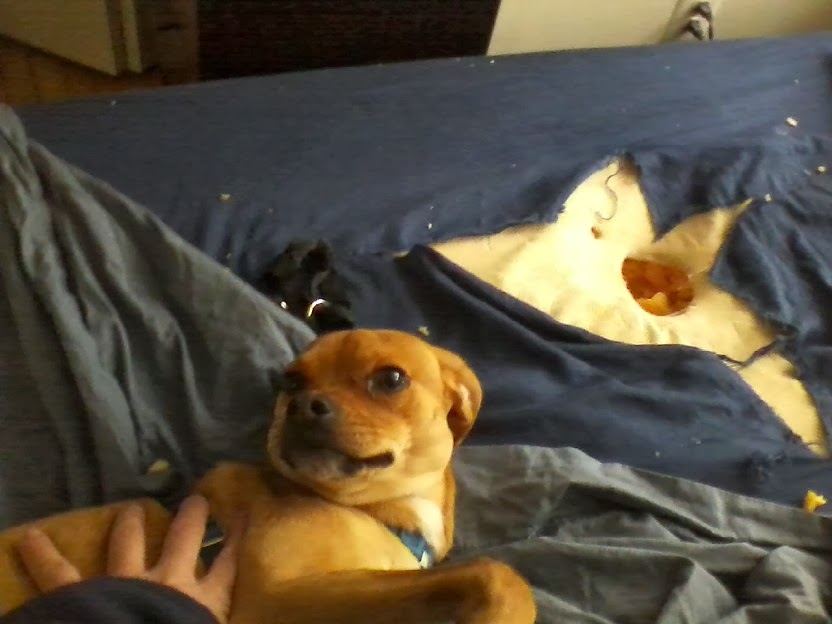 Brady and his mattress hole handiwork (after I had cleaned up the foam that was everywhere) in Chris's apartment, Washington, D.C., 2:55PM Feb. 9, 2014. See below for discussion of Brady and his doings.
*******


I am very tired right now as I got up quite early -- tending to Brady -- and need to sleep. I also have been to the gym three days in a row (I'm definitely taking off tomorrow, Thursday, and Friday from the gym). 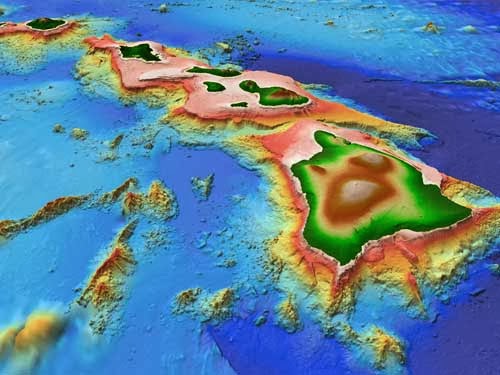 Finally, I have a TON of work to do between now and Friday in the form of both copyediting and technical editing hundreds and hundreds -- approaching 800 in all -- references for the giant Hawaii report. 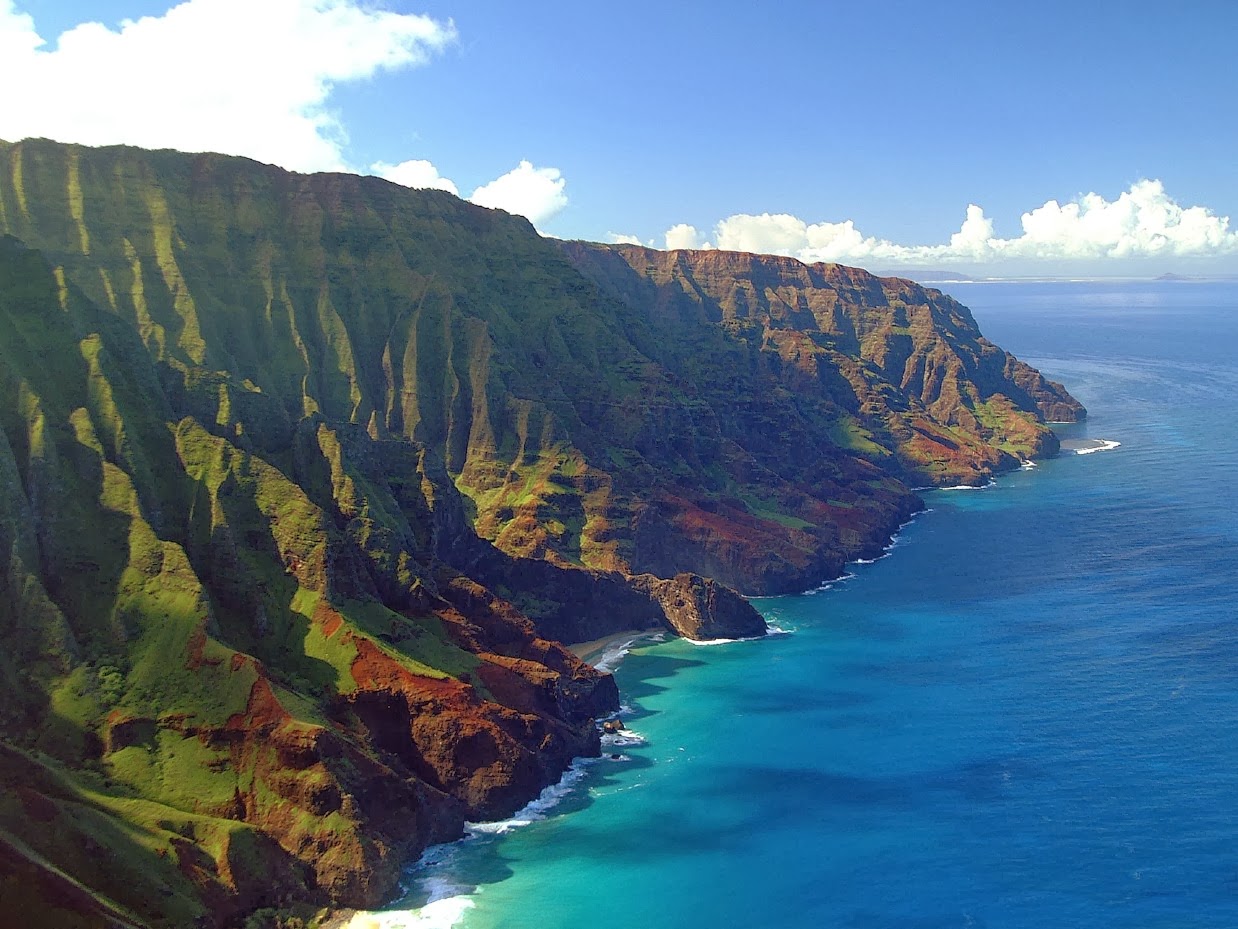 This includes consolidating numerous duplicates and standardizing their formats and call-outs, not to mention ensuring the correct ones are being used. In fact, there is probably not enough time to finish all of this -- and I really need to avoid the more technical aspect of it and just go with whatever the section authors wrote. Indeed, given the scale and scope of the remaining work, I really should refrain from my blogging this week. 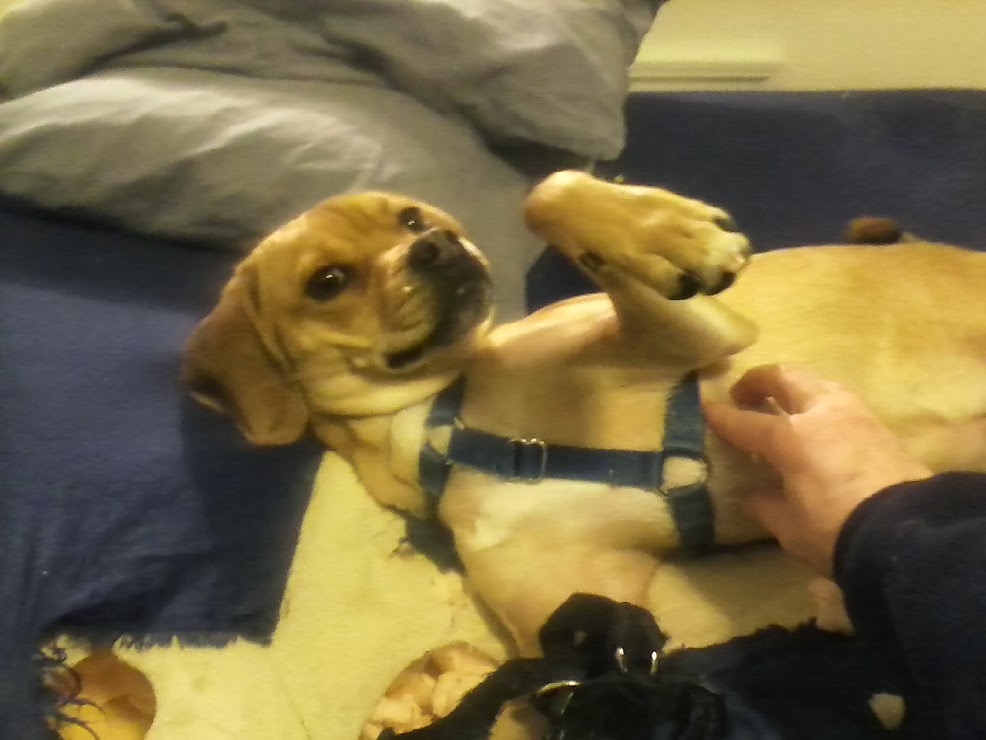 
Oh, yes, I mentioned about Brady. Chris is back home from his 4-day stint in South Florida as part of a multi-stage gay marathon event between Miami and Key West. He missed his earlier flight but got a later one back to National Airport, and he is home now with Brady. 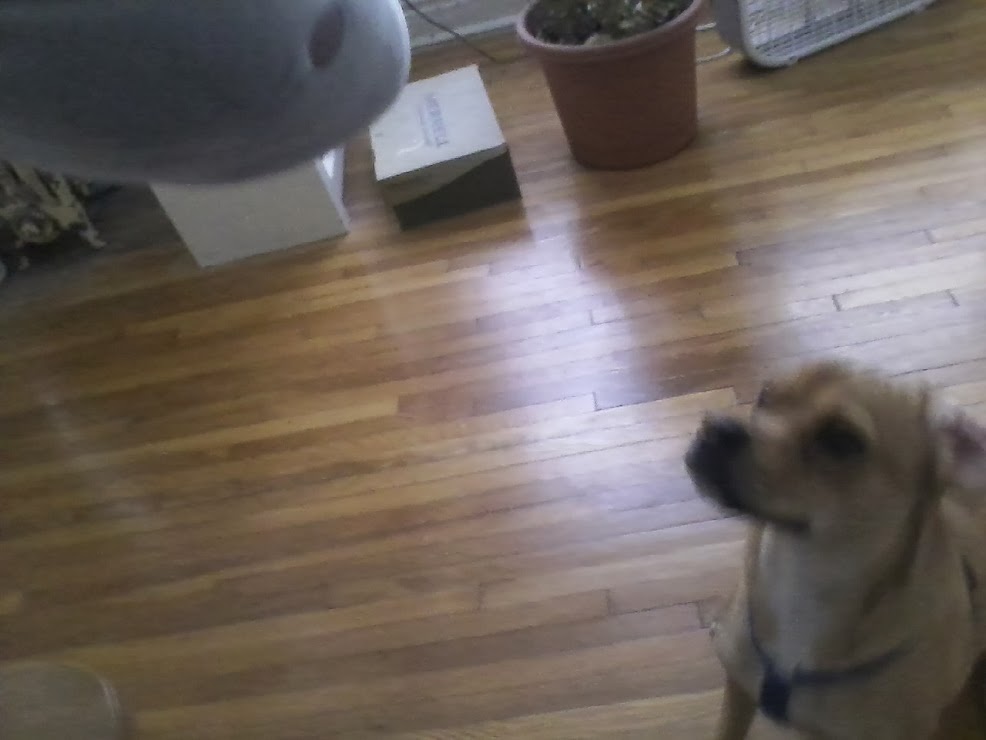 Needless to say, when Brady was in my apartment, Flippo the Hippo and the other plush stuffed animals stayed carefully out of sight. However, here Flippo floats at a safe distance above Brady -- who for his part tried to jump up and reach him (but Flippo stayed out of harm's way).
*******


As for Brady, he was just wonderful the whole time -- except for destroying Chris's foam mattress and the occasional thing he does as a male puppy -- and I really enjoyed having him. I had him at my apartment twice including last night. He was all snuggled up next to me in the fan-whirled darkness, and it was so nice to have him around. Also, as a conclusion to my Brady-sitting, after work today, I took him for a walk, fed him, and spent about 20 minutes with him (even while I was on the phone with my mom, who agreed he was quite cute based on the pictures I sent, though she said he had a mischievous look, too). 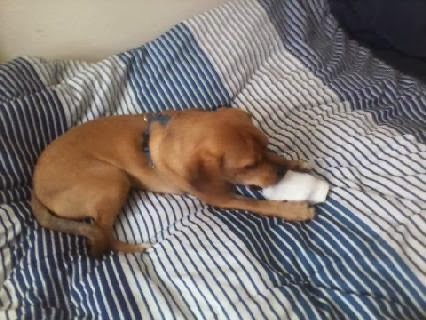 
OK, that's all for now. I'm watching reruns of The Golden Girls, in particular at this exact moment (1:10AM as I write this) one of my favorite ones: Bringing Up Baby. It's hilarious. I made dinner a short while ago even as I was watching an interesting Perry Mason episode on Me-TV: "The Case of the Nebulous Nephew." 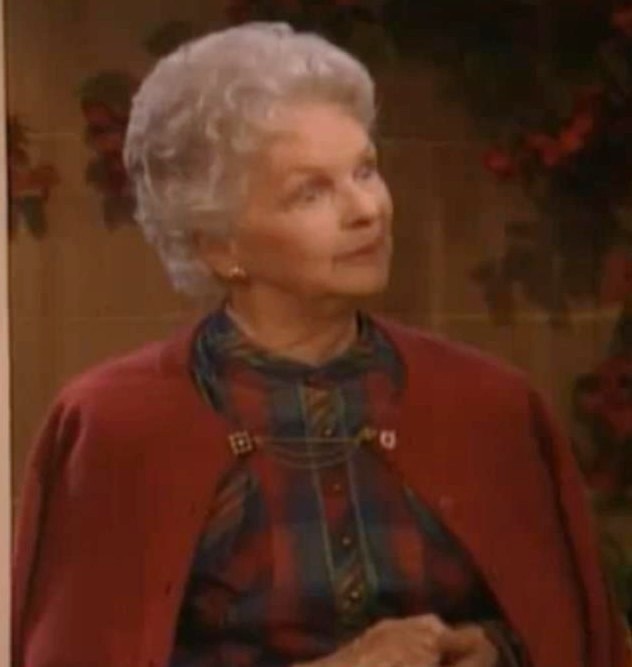 It guest stars as one of two strange old sisters the late Meg Wyllie, who would later be one of the Talosians in the 1965 pilot episode of Star Trek: The Original Series called "The Cage" (which doesn't even have Captain Kirk and which was not actually aired in its entirety until 1988). She was also in two episodes of The Golden Girls.


The interesting twist in the Perry Mason episode is that Caleb Stone was a black man (played by the late Ivan Dixon).
OK, that really is all for now. I'm unsure about my blogging this week given my workload / deadline that I have, though if we get a major snow, I'll obviously be writing about that.
--Regulus
Posted by Regulus at 2:16 AM