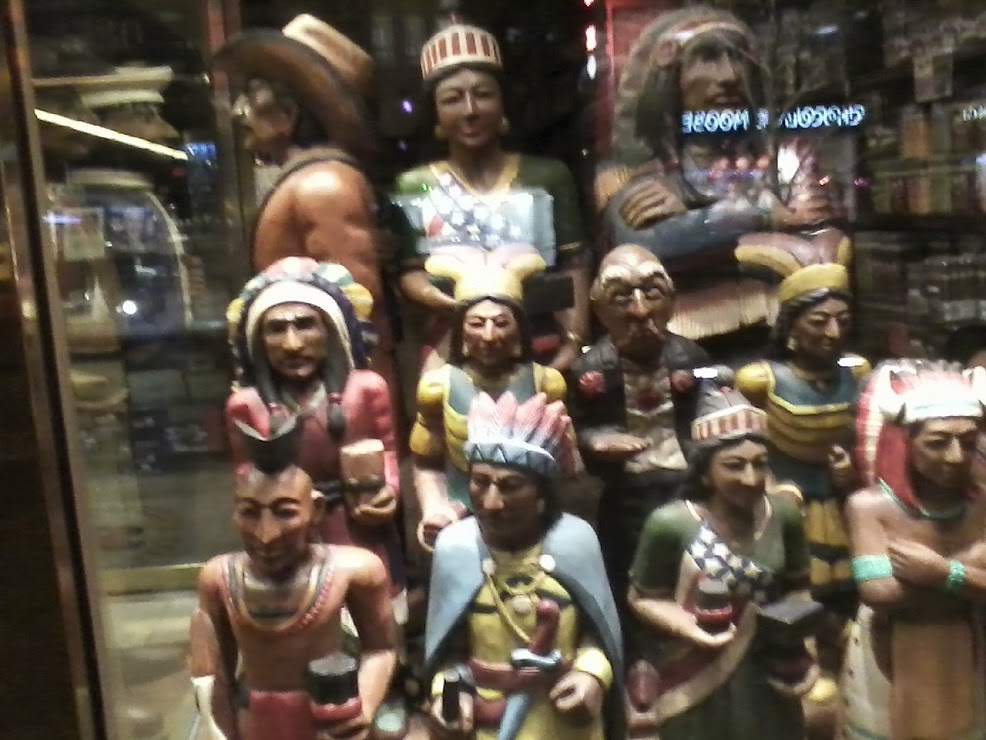 OK, so this is just a quick update. (Well, in the end, characteristically not so quick -- I just can't help it.)


For starters, I would like note that I SUCCESSFULLY returned in my Smartphone (which I had not yet had for 14 days) at the Verizon store on L Street and instead got my old stand-by, an LG Revere 2 flip-open phone. The LG stands for "Life's Good," I believe. 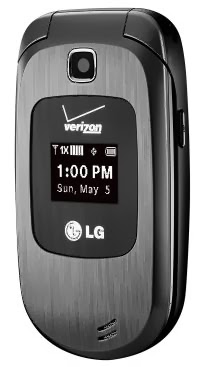 Although I had to wait nearly 40 minutes to be served (literally none of the five associates were finished helping anybody in a full 35 minute period from the time I got there at 630PM to about 705PM), I was able to do exactly what I had hoped. Furthermore, the young lady who assisted me (Janika, I believe) was so helpful, including getting a new price plan that is about $15 a month less expensive than the previous one I had (and a full $40 to $50 cheaper than the Smartphone one). I intend to let Verizon know how helpful she was.


Thereafter, I made it to the (Anthony Bowen YMCA) gym and had a 5 mile jog, a bit of weightlifting (it was an abbreviated session), and then a short swim (about 20 minutes). I also went yesterday. However, I need to take off at least three of the next four days because I may have overdone it. I have weird tingly feelings in my right leg and foot, and I'm concerned something may be wrong. It's almost (but not quite) painful (more of a slightly annoying sensation).
**Updated 3:44AM 6/7/2014: Content removed, specifically, a God-awful picture of me that I can't figure out why I posted in the first place.**
My work day was OK -- I'm starting with the reference work for the giant Hawaii project. However, our company has instituted a new quarterly cycle for our performance evaluations, and I am a bit worried since these past 3 months haven't been my most stellar, even if I have in fact completed a number of reports. Still, it feels like it wasn't that good.


Above: One of the two last "selfies" I took (in the DOE cafeteria) with my short-lived Smartphone earlier on Monday, Feb. 3, 2014. I've come to accept the fact that I'm just a strange-looking person. (There's really nothing I can do about it.)
*******


We had a very rainy day this now-concluded Monday, February 3rd with daily records set at all three regional airport climate stations including the following: 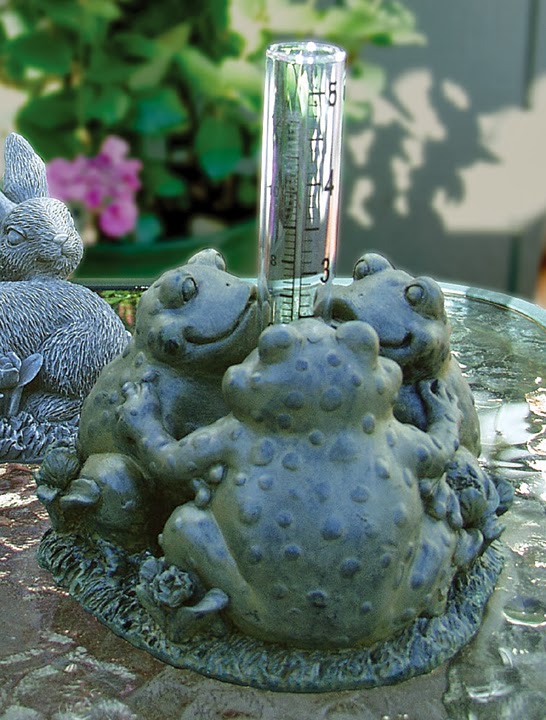 KDMH had 1.22" of rain and unknown amount of snow (likely trace).


As noted above, there was a touch of snow even in D.C. proper, but much of the region had rain. Accumulating snowfall was mostly confined to the usual far northern and western exurbs and outer regions including along the Pennsylvania and Maryland border including 5 to 7 inches in northern Frederick and Carroll Counties and up to 8 inches along the Allegheny Front. 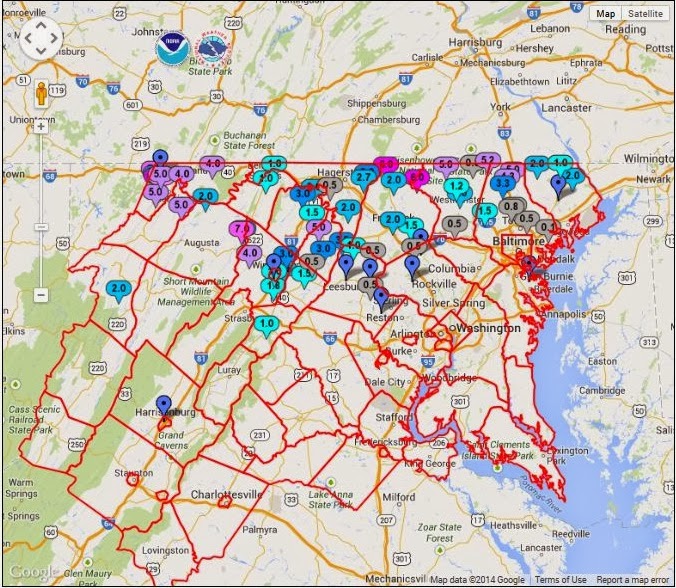 
The Capital Weather Gang write up about the rainfall is in this entry (link embedded): PM Update: Winter storm watch expanded into D.C. suburbs; record rainfall. 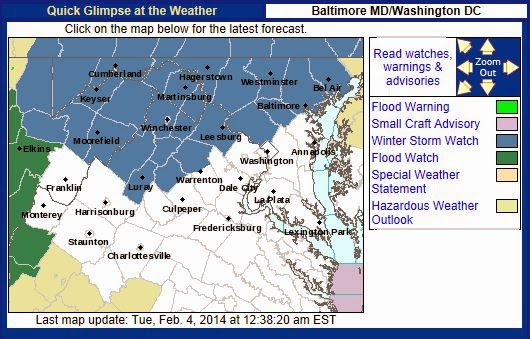 
There is ANOTHER winter storm watch out for the same areas (see above map image) for a mostly mixed precipitation event. There may even be a touch of freezing rain in D.C. proper. As for the weekend storm -- a potential big coastal nor'easter -- it is still "on" but it is too far out to even guestimate at "P-types" and where. 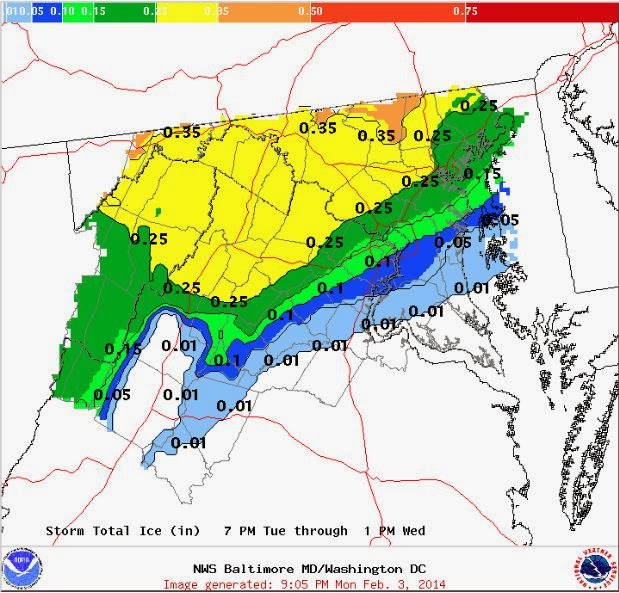 
Finally, I would like to note this excellent summary that Matt Rogers of the Capital Weather Gang (link embedded): January 2014: cold and snowy compared to average, plus a polar vortex attack. 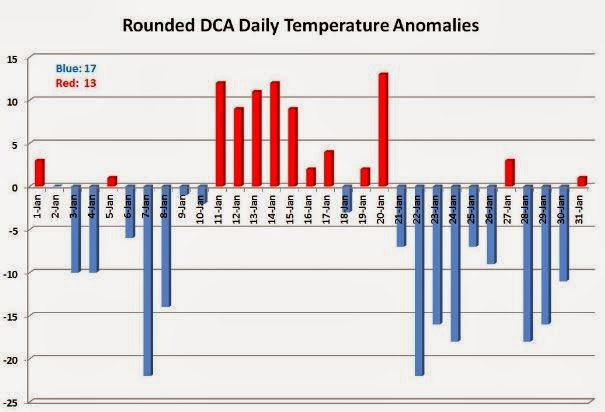 
More impressively, the geopotential height anomalies for January 2014 are quite astonishing and clearly show the prolonged displacement of the polar vortex: 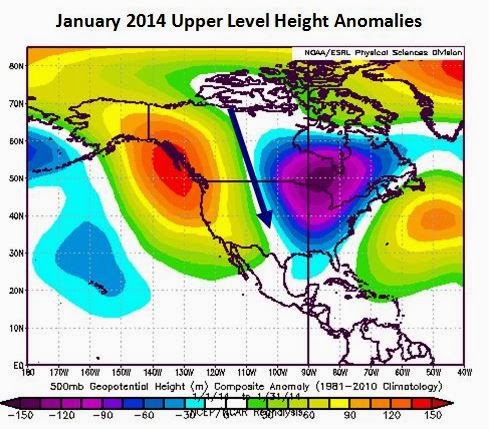 
As I wrote this, I watched Frasier and The Golden Girls reruns. The Frasier episode was "Miss Right Now" and it was slap-stick hilarious, especially with Jennifer Tilly as Kim ("I met more people in your apartment than at the bar.") As for The Golden Girls reruns, they were from 1986 -- or about 28 years ago. That means we are as far removed from 1986 as 1986 was from 1958.
That's an amazing fact.

It's sad that Rue McClanahan, Bea Arthur, and Estelle Getty are all gone, but God bless Betty White, still going strong at 92. I think she can easily make it to 100. 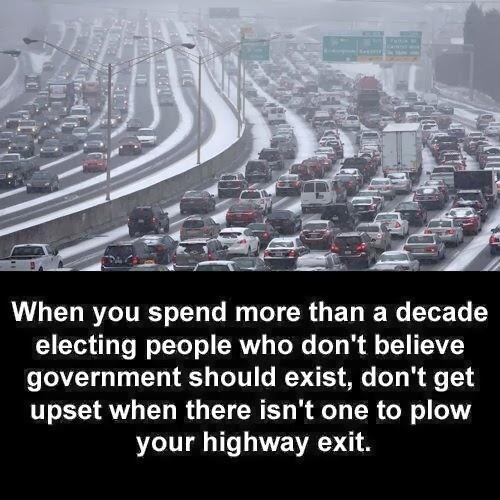 
Below are linked some pieces that I found that I think are worthwhile reads. The first is a piece by Ed Kilgore in Washington Monthly (link embedded) "What? They Didn't Build That?" about how House Majority Leader Eric Cantor tried (at their most recent retreat / mass psychosis session) to get his House GOP asylum inmates to understand that most Americans not only don't own their own businesses but do not want to, but instead just want a decent (living) wage, and as the corollary, small businesspeople are not the source of all virtue on this planet while everyone else is a parasite. 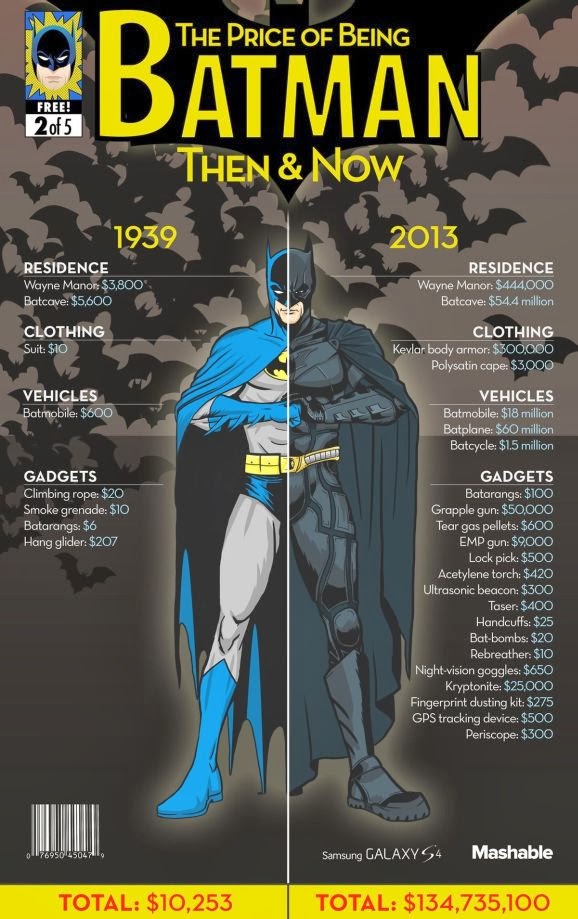 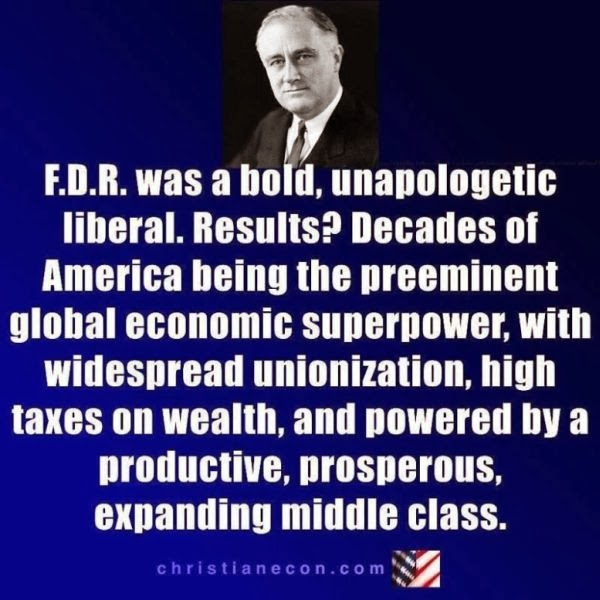 Thirdly, Prof. Krugman's most recent New York Times op-ed is also worth a read: Delusions of Failure. This one discusses the latest GOP bullsh!t store about "Bette of Spokane" and the phony story about the massive premium increase she allegedly faced due to Obamacare.
There are no Chait, Barro, or Sullivan pieces linked in this particular entry. 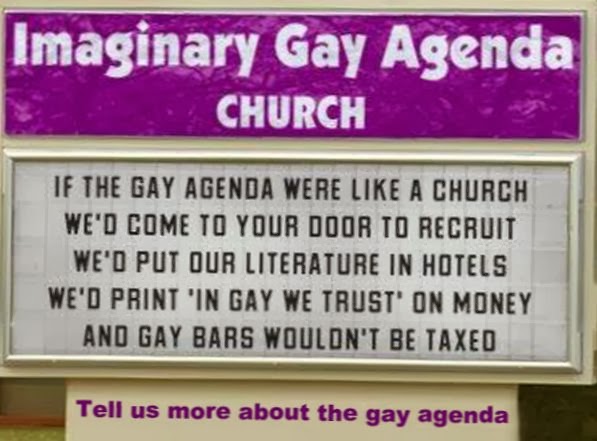 Ha ha
Actually, this political image (which I got off the current episode of Bartcop, who is obsessed with pot legalization and is fanatically anti-Edward Snowden) reminds me of a weird and powerful dream I had this morning. 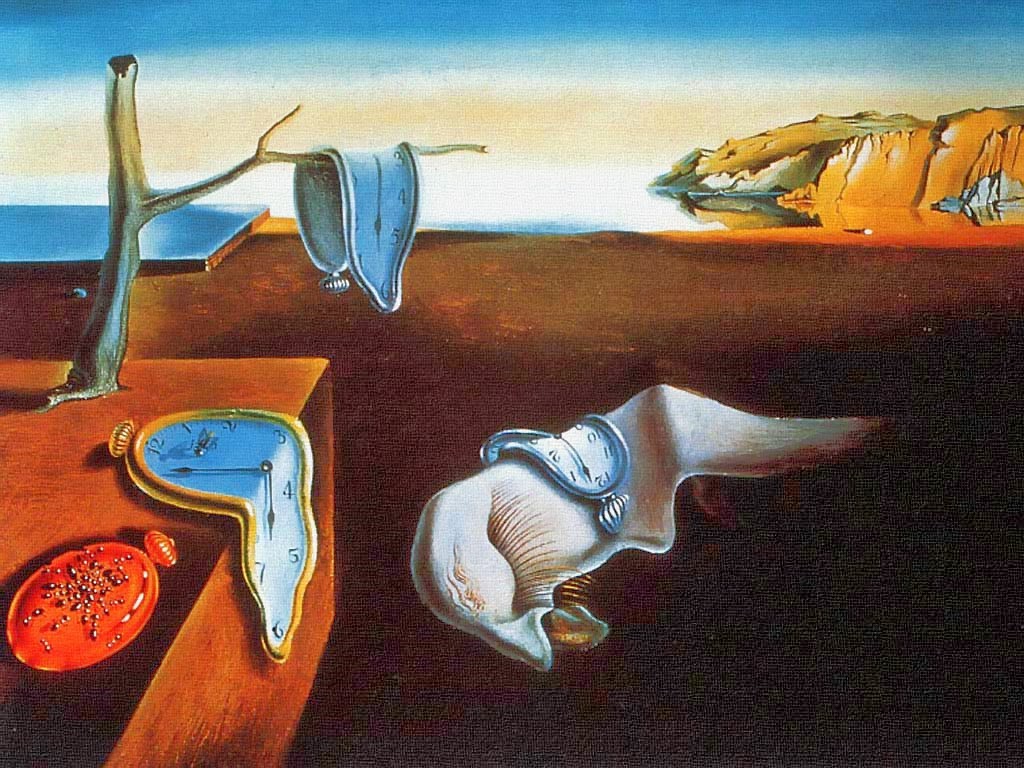 **Updated 3:44AM 6/7/2014: Some content removed from sentence below.**
In the dream, which played out as a complicated and lengthy movie that I was at once watching and part of, I was in some place with a lot of young gay guys, and it was quite colorful. There was also a happy, very socially tolerant, liberal married straight couple.
In an instant, we flashed back in time about 50 years -- to a particularly brutal and repressive period. The colors drained away into a drab grayish world with some of the gay guys now living as straight men, and the married couple (the husband) screaming at another girl to get out (because of her own "liberated" nature). 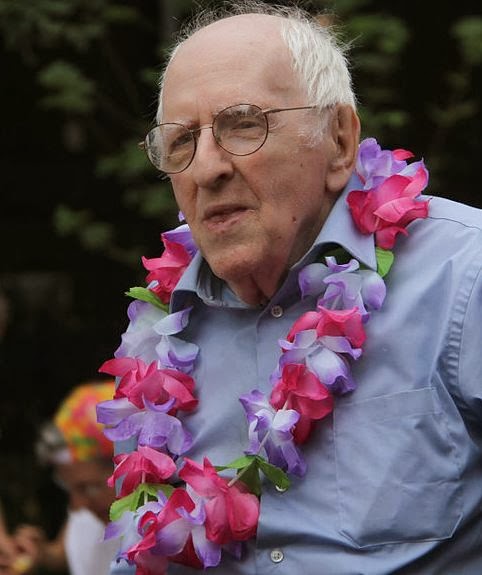 There were some rather bad scenes in the dream involving gay persecution (I told you it was like a movie). But slowly some of the gays started a movement of social tolerance. At the end of the dream, everyone was back in "the present" -- except they were now quite old and gray.


All of a sudden (I must have been on the verge of waking up) I had the idea that the flashback had never actually occurred and it was just a dream (within a dream).
Then I woke up. It was dark and gloomy and rainy outside.
I've no idea what that means, but it was an emotional dream the memory of which vanished upon waking up.
OK, that's all for now. My next planned update won't be for two or three days.
--Regulus
Posted by Regulus at 2:05 AM