**As explained below, three images for this entry are really low-quality.** 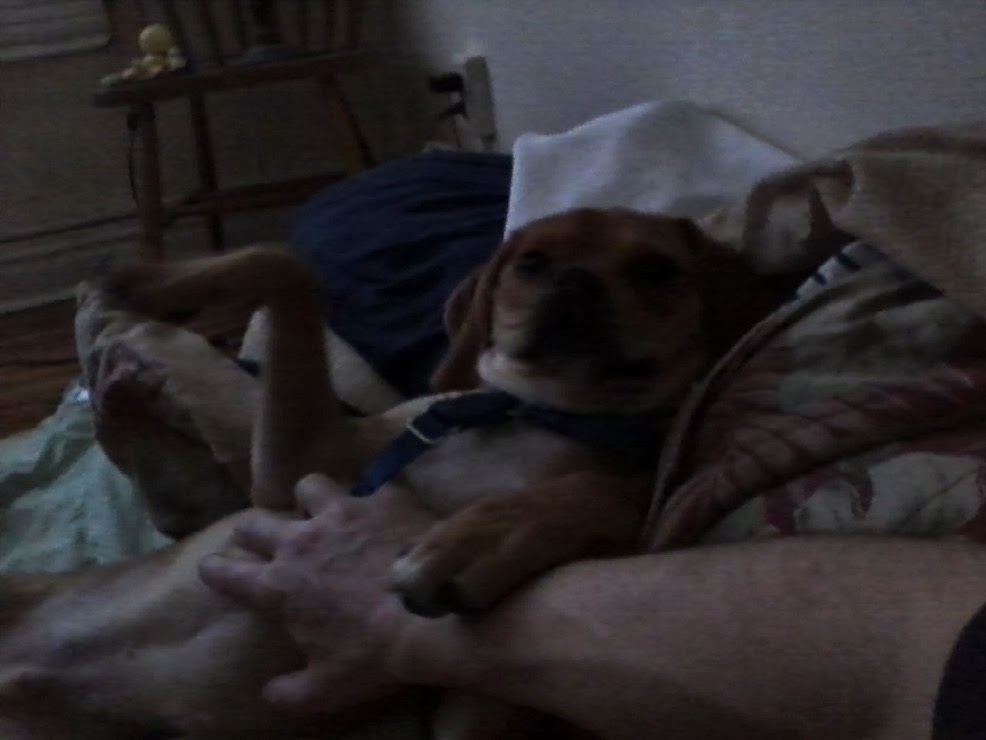 Brady in my bed in my apartment getting his tummy rubbed, 7:29AM February 10, 2014. I'm sorry for the low-quality of the picture, but it was kind of dark in my apartment, and my cellphone camera is not so good (although I'm quite happy to have the LG Revere 2 model in place of that Frankensteinian Smartphone).
*******


Just a quick morning update. I brought Brady with me back to my apartment last night. He's here with me this morning. He has already had his morning walk in the cold morning air and his breakfast, and now he's just sort of wandering about the apartment occasionally whimpering. (BTW, I've sure picked up a lot of poop the past several days.)
I'm not really sure what to do with him. Given one of his behaviors, which we don't tolerate, I think Brady might be gay. Either that or all young male puppies behave that way. Brady also turned a bit destructive in Chris's apartment: He gnawed deep into a thick foam mattress on his bed and has created quite a hole in it. Twice I had to clean up a substantial amount of foam all over the floor. 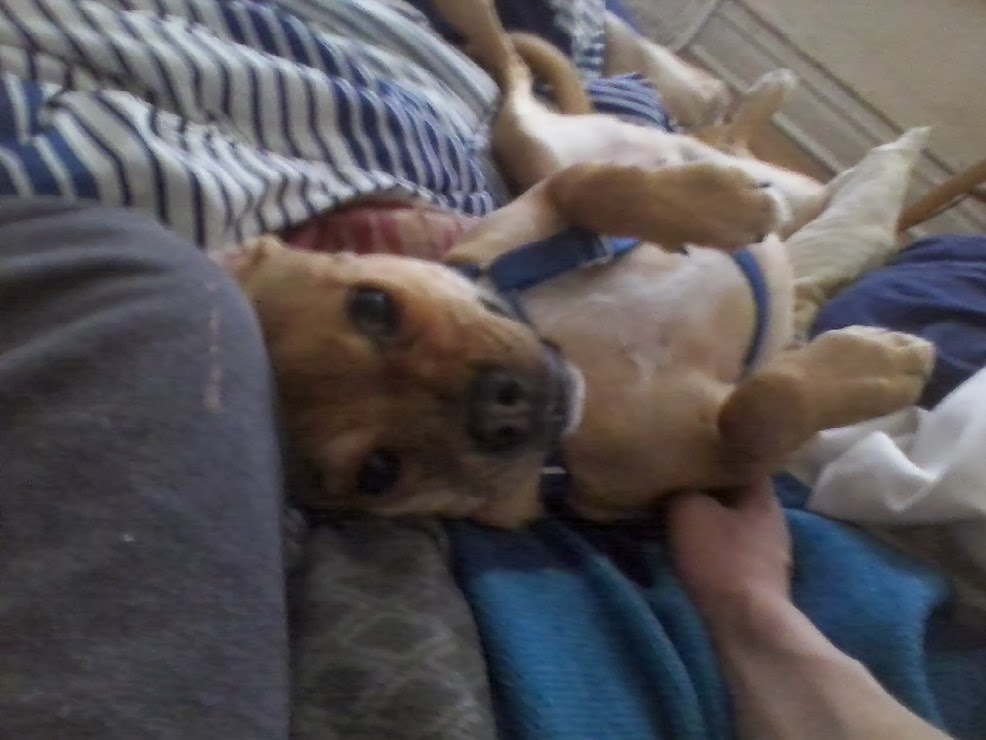 More Brady in bed this morning. He demands -- and gets -- a lot of attention.
Yes, it's another low-quality cellphone picture for the same reason as described above.
*******


I'm not sure what to do now. Normally, I'd just go into work (it IS Monday morning), but I have a bad headache and I'm wondering how to see that he has an early afternoon walk. I was thinking of just working from home, but after taking off a couple of hours.
Chris is scheduled to return this evening from Key West via Miami. This should simplify my schedule. (Going to his apartment four times a day, even though very nearby, is quite demanding.)
Turning to the weather, the models -- including now the 6Z GFS -- are converging on a major coastal storm / winter storm event late Wednesday into Thursday. The start of this is barely 60 hours away rather than the usual hour 150 "fantasy panels" scenario that fails to pan out. 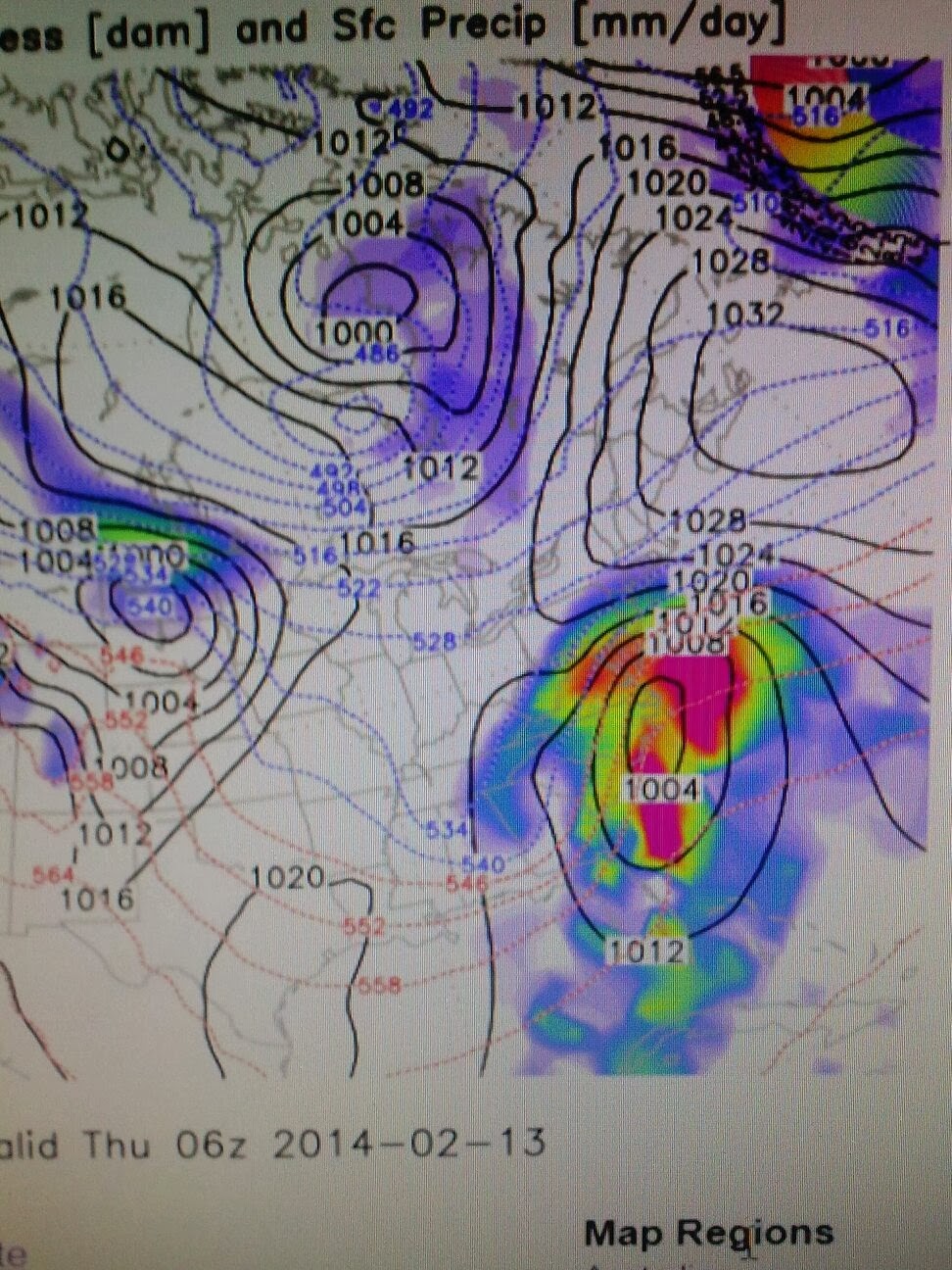 This is picture of a picture forwarded to my email, hence the low-quality but it shows yesterday's 0Z ECMWF ("European") model, in particular, MSLP, 500-hPa geopotential heights, and precipitation in some time increment (either 3 or 6 hours) valid at hour 90 / 6Z (1AM EST) February 13, 2014 for parts of the U.S. including the East Coast. (Gary sent me this. He can access via his NASA account the detailed ECMWF output, which I cannot.)
******* 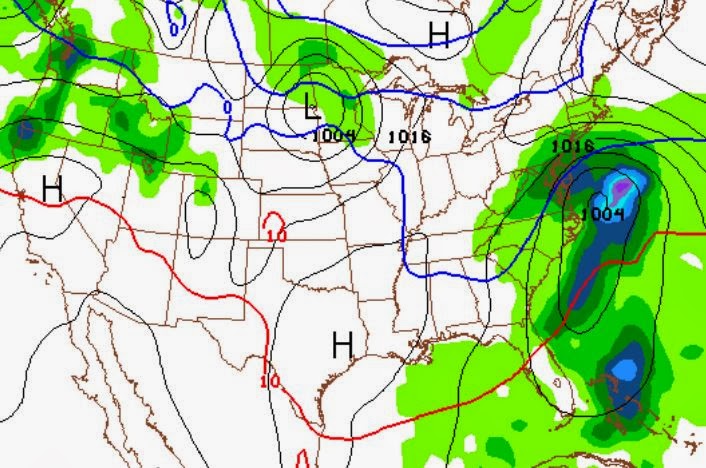 
The Euro and Canadian models have had a veritable blizzard even in the mid-Atlantic region / D.C. and Baltimore Metro areas, while the operational GFS had a smaller storm that only glanced the region. But the most recent GFS and its ensembles are starting to come around. We will see what the 12Z shows. The NAM has a big storm but it seems mostly a rain event for D.C. proper. I'll have more to say on this later.
OK, signing off for now. Again, I'm not sure what to do right now (it's 8:36AM as I post this). I do intend to update the blog later.
--Regulus
Posted by Regulus at 8:36 AM