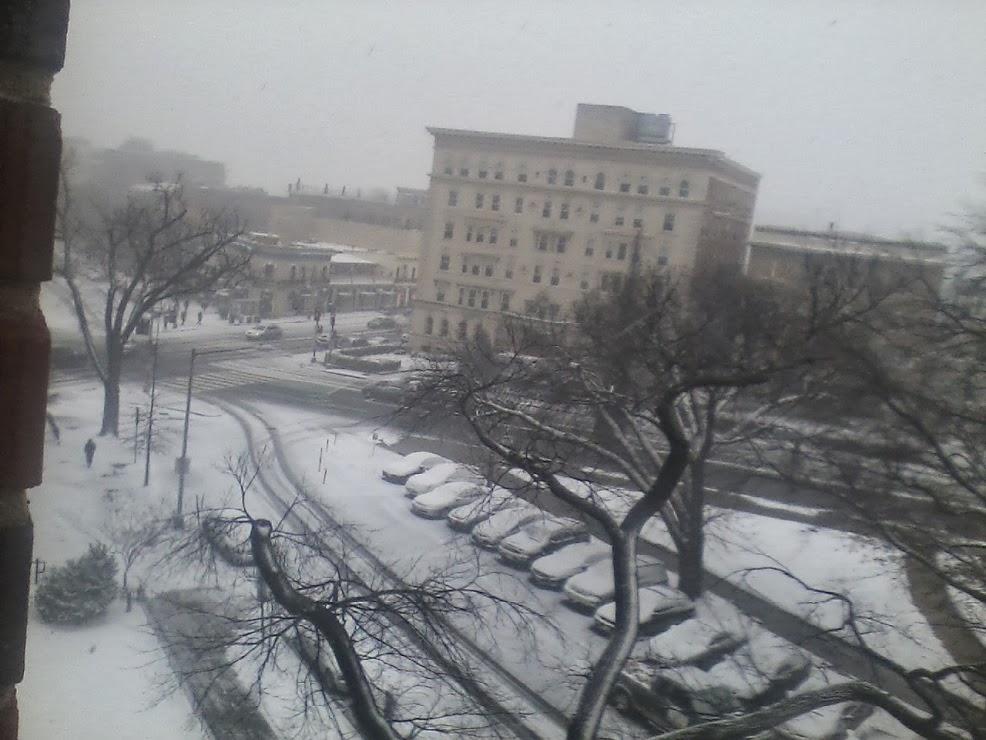 The familiar view (at least to my regular blog readers) from my apartment looking to the southwest down New Hampshire Avenue and the intersection of 16th and U Streets NW, Washington, D.C., except on actually snowy day, 1:55PM January 21, 2014.
******* 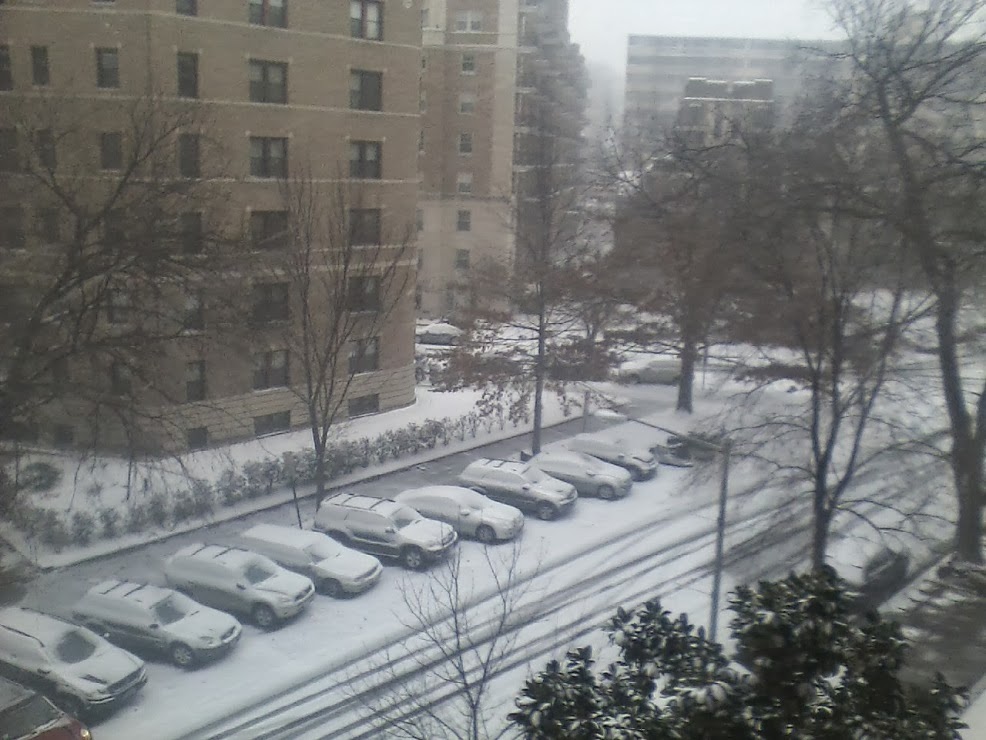 
By contrast, here was the lovely view way out in Purcellville, Virginia earlier this morning ... 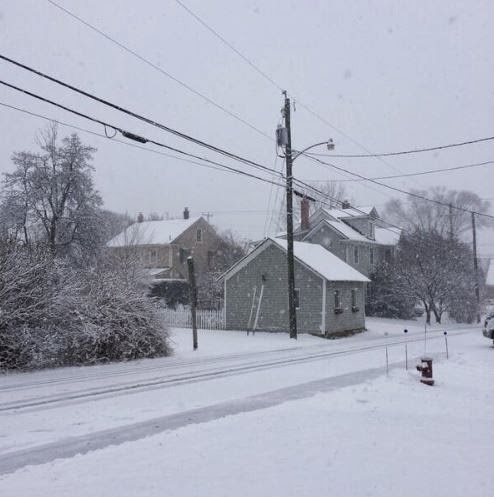 This photo was taken by "KPJ" in Purcellville, Va., January 21, 2014 and posted on the Capital Weather Gang in this entry.
Purcellville sounds rather nice. Maybe I can get LP or Gary to go there one day. God knows I couldn't get there by myself lacking any transportation. I just don't leave the D.C. Bubble.
*******


Well, it looks like we are at the start of what may be our first bona fide snowstorm in Washington, D.C., since February 2010, and certainly the most since the Jan. 26, 2011 event, although one must NEVER underestimate the "bust" potential for a D.C. snow event. 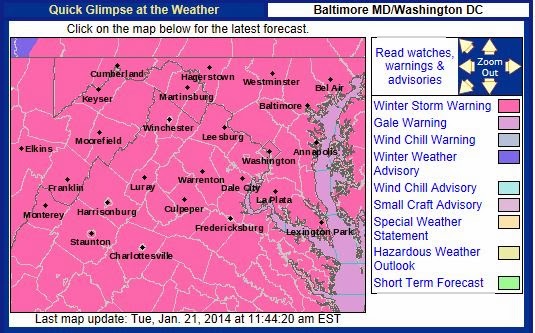 
OPM has closed the Federal Government, so I am off today, although I have the option of tele-working part of the day. Forecast amounts are in the 4 to 8 inch range. I have a feeling it is going to be closer to 10+ inches.


In the meantime, I suggest just following CWG today. The two most current and relevant entries through 11AM are here and here. 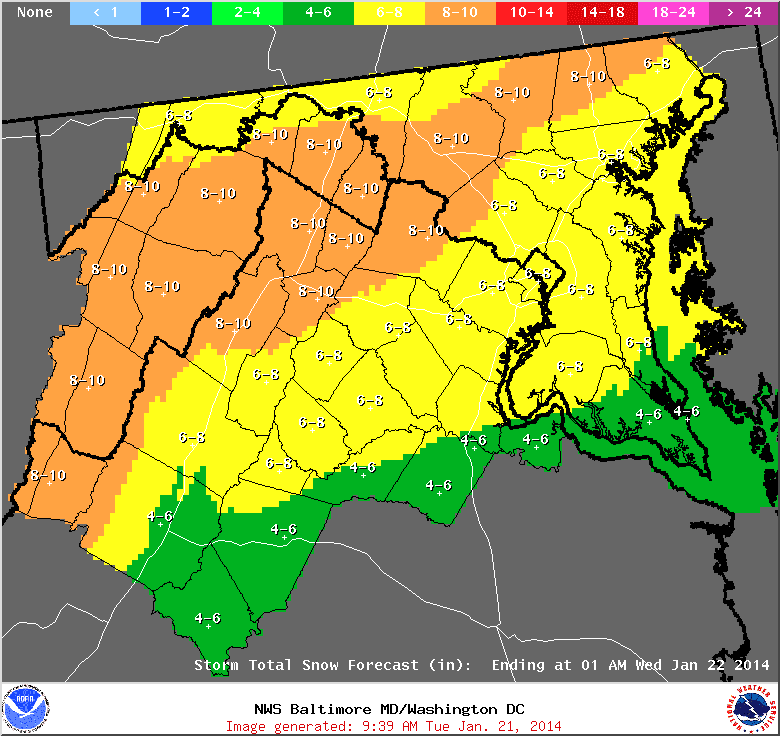 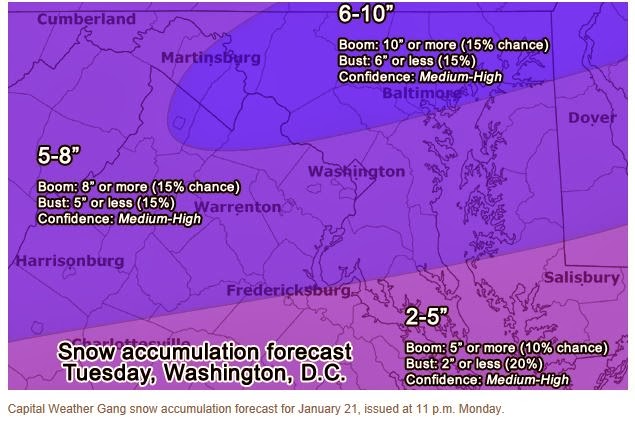 
So late night, I had a really wonderful night with Chester, who came into D.C. from Howard County to have dinner with me. We went to Old Ebbitt Grill, which was pleasant enough. Thereafter, I went to LL, where I was treated pretty much on the low-end of sh!tty side by the bartenders. I'm not sure why I go there. In fact, I think I may stop going there. I'm tired of going to places where I am hated, especially as I tip well, yet I'm treated like crap. 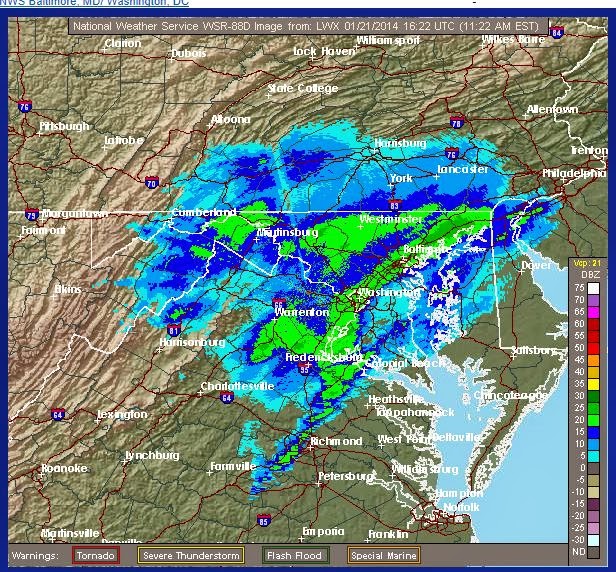 
More to the point, almost everybody who is in my life on a regular basis -- friends and acquaintances -- hates me, and they are certainly never happy to see me. Well, except for Flippo and the rest of the plush pod, bloat. He and they like me.
At this point, I'm also unsure if I want to do the Buffalo / Niagara Falls trip. The whole point was to see snow, and we have it here. It was snowing heavily around 1130AM and almost looked like we were heading toward a blizzard warning, but it has since let up somewhat. The radar is kind of indeterminate.
Well, anyway, let's see how this whole event plays out. I shall try to update this blog later.
--Regulus
Posted by Regulus at 12:14 PM