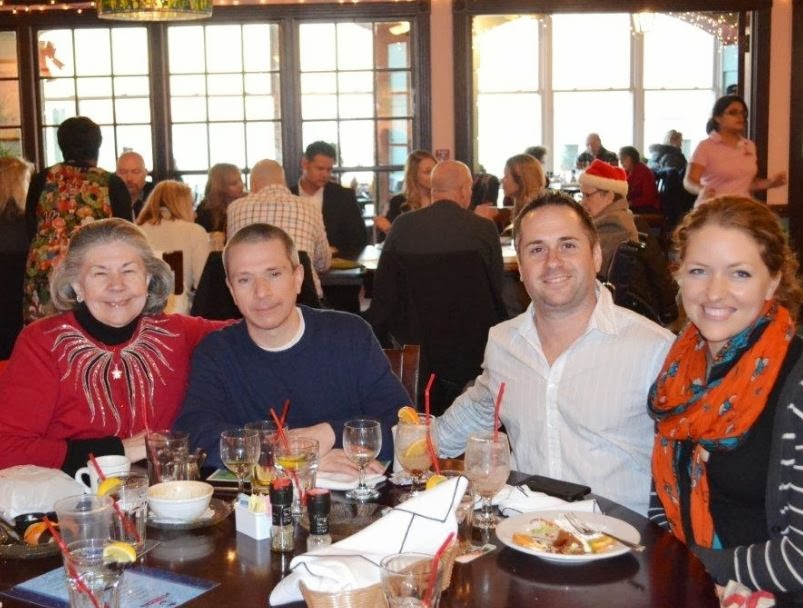 
The pictures in this entry were taken variously by Ray, Wendy, and myself. The ones I took included some I took on the drive in from Millersville to Annapolis. (I had stayed overnight on Dec. 23rd and Dec. 24th with my mom and Ray at their place in Millersville. I then rode back to D.C. with Gary and Wendy.) 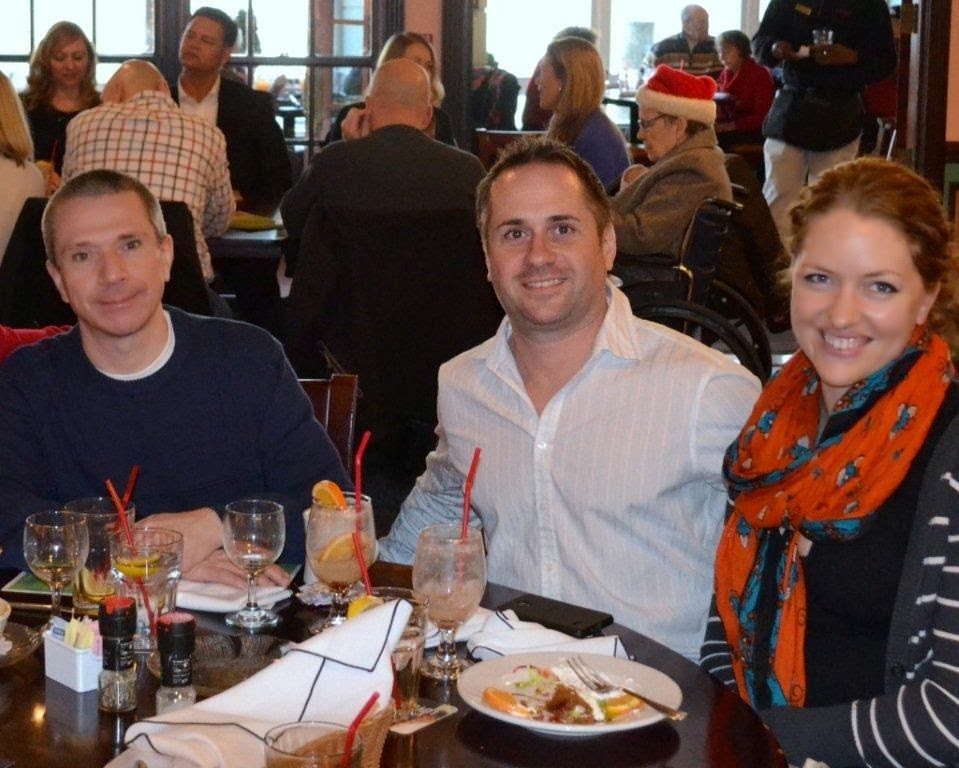 Yours truly, Gary, and Wendy at Pusser's Caribbean Grille, Annapolis, Md., December 25, 2013.
This picture and the lead one were both taken by Ray with his nice camera -- and thus he was not in either. As for my mom, she WAS actually in this one but cropped herself out of it because she was unhappy with how she looked.
My mom and dad and I have very odd relationships with photographs. This has been true for decades.
******* 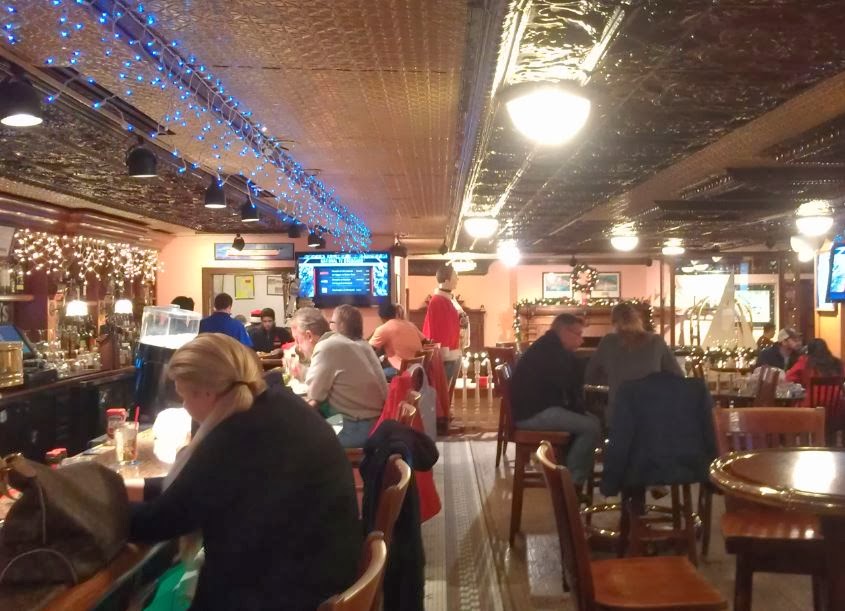 
It was a rather cold Christmas day 2013 -- temps mostly in the 20s Fahrenheit with actual highs of 32F at KBWI and 33F at KDCA -- but with wall-to-wall sunshine. This wall-to-wall sunshine weather has actually been a recurring theme for the past several years on both Christmases AND Thanksgivings (or at least that's how I recall it), in particular whenever I have gone in Annapolis for a daytime or early evening restaurant visit (usually the Chart House) with my mom and Ray (and Gary). 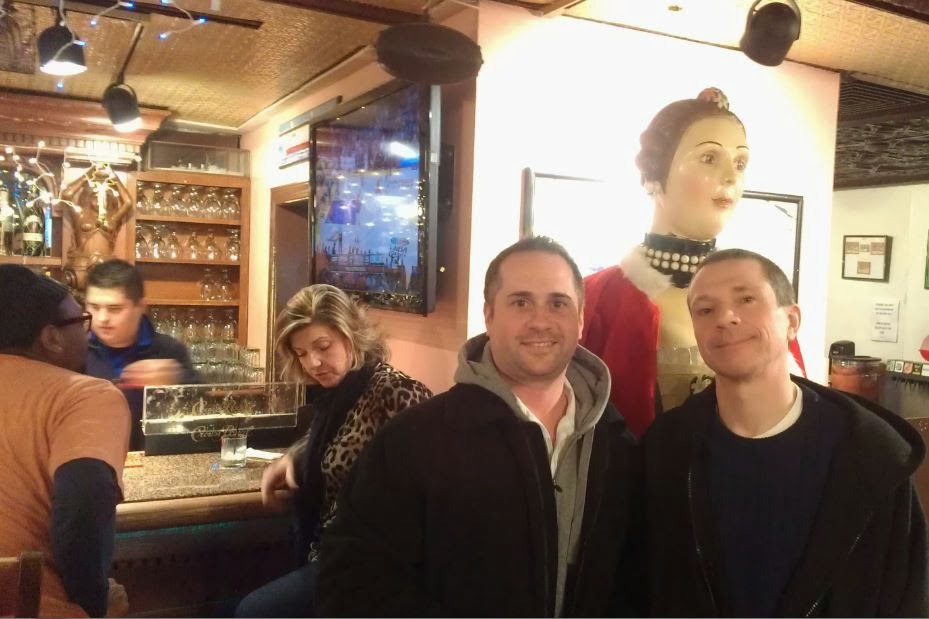 This is a picture of Gary and myself at Pusser's Caribbean Grille standing by the painted wooden statue -- I can't remember what name it has -- in Annapolis, Md., 5:40PM December 25, 2013. The lady in the leopard print dress was the hostess and she figures into the next picture (see below). Wendy took both pictures.
Updated 9:33PM 1/31/2014: PENNY! The statue's name was Penny! (Gary remembered.)
*******


Needless to say it, NEVER snows on Christmas in this area. (The worst was in December 2010 with an impending mid-Atlantic blizzard that buried New Jersey and New York the next day -- Boxing Day -- while the D.C. and Baltimore areas were screwed out of any snow in one of the more painful snow-screwings in the past decade.) 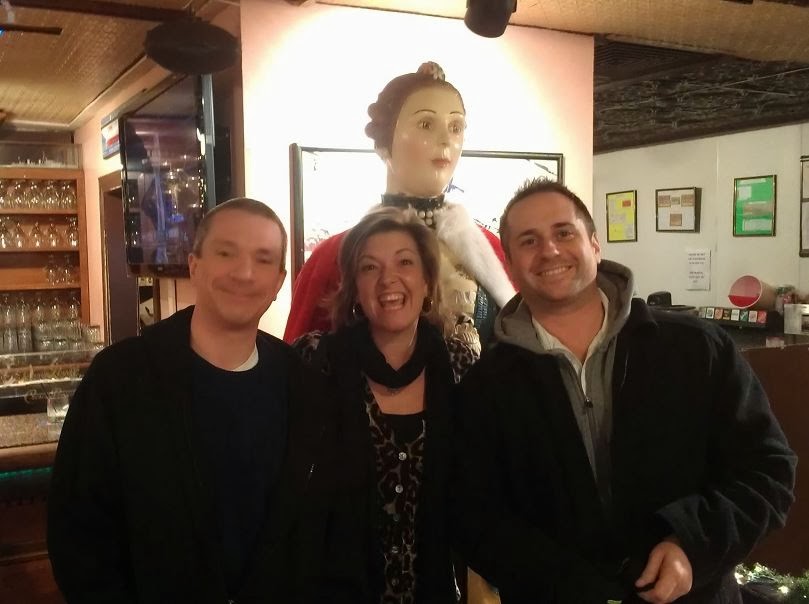 (Updated caption): Yours truly, the "hostess with the mostess," and Gary standing in front of Penny at Pusser's Caribbean Grille, Annapolis, Md., 5:41PM December 25, 2013.
We were quite fascinated by her (and her dress, which resembled nothing so much as a leotard) and I asked her to pose with us, which she readily did. (Oh, yes, earlier I had to tell her about some nasty graffiti on the men's room wall -- a highly racially offensive drawing in one of the toilet stalls -- and she had it quickly covered up.)
*******


As for this Pusser's restaurant in Annapolis, it is actually part of a a small chain that includes another restaurant in Ponte Vedra Beach outside Jacksonville, Fla., and another in Palmas Del Mar, Puerto Rico. There are also "outposts" in the British Virgin Islands.

The name "Pussers" is a corruption of the word "Purser's" and it reflects its British West Indian origins -- Pusser's today is rum-making company that (it appears to me) is the indirect descent of the original Pusser's Rum Ltd., a rum-making (and probably at some point, rum-rumming) company that existed for nearly 300 years and was associated closely with the British Royal Navy and its doings in the Caribbean. Indeed, until 1970, the rum was given to sailors in the British Royal Navy.


The current company, including both its rum-making and its theme restaurants, probably just uses the brand name and some of the original recipes. (I could be wrong on this but I really don't feel like delving into the topic.)
Anyway, as for the Caribbean food, we really never tried it because there was a set Christmas day menu. Gary and I, however, DID have the famous Painkiller Rum drinks (the level 3 ones, I believe) in addition so wine. In any event, I think the idea is for the five of us to return to the Chart House in Annapolis.
*******


The remainder of this entry features the pictures that I took on the ride to Annapolis and in the restaurant with my old / now-forever lost flip-open cellphone and its signature low-quality camera. 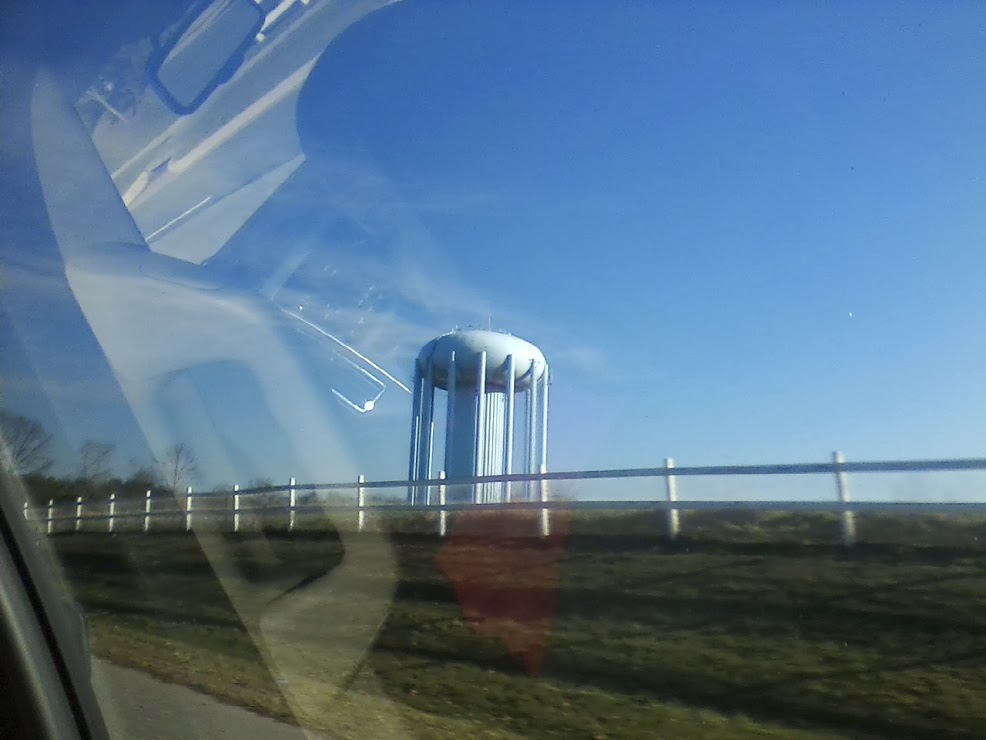 The large blue water tower located off East West Blvd. at Maxwell Frye Road in Millersville, Md., 2:08PM Dec. 25, 2013.
I've featured pictures of this particular water tower in previous entries, most recently this past Thanksgiving and on Christmas Day 2011. (Note the similar weather on those days.) 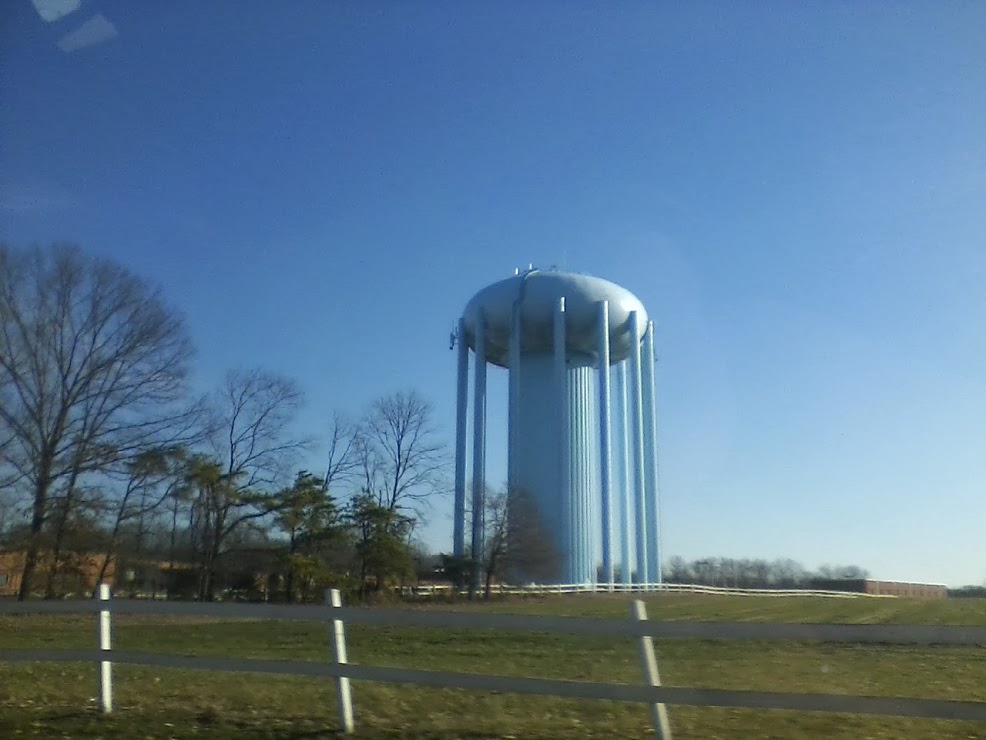 Another image a few seconds later of the same water tower -- looking like an ellipsoidal spaceship on giant central shaft and smaller legs radiating outward from the central pod -- in Millersville, Md., Christmas Day 2013.
******* 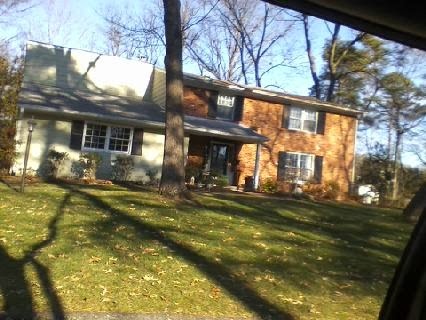 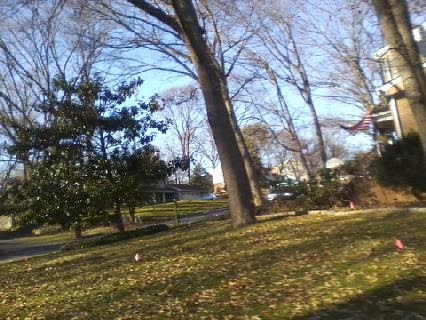 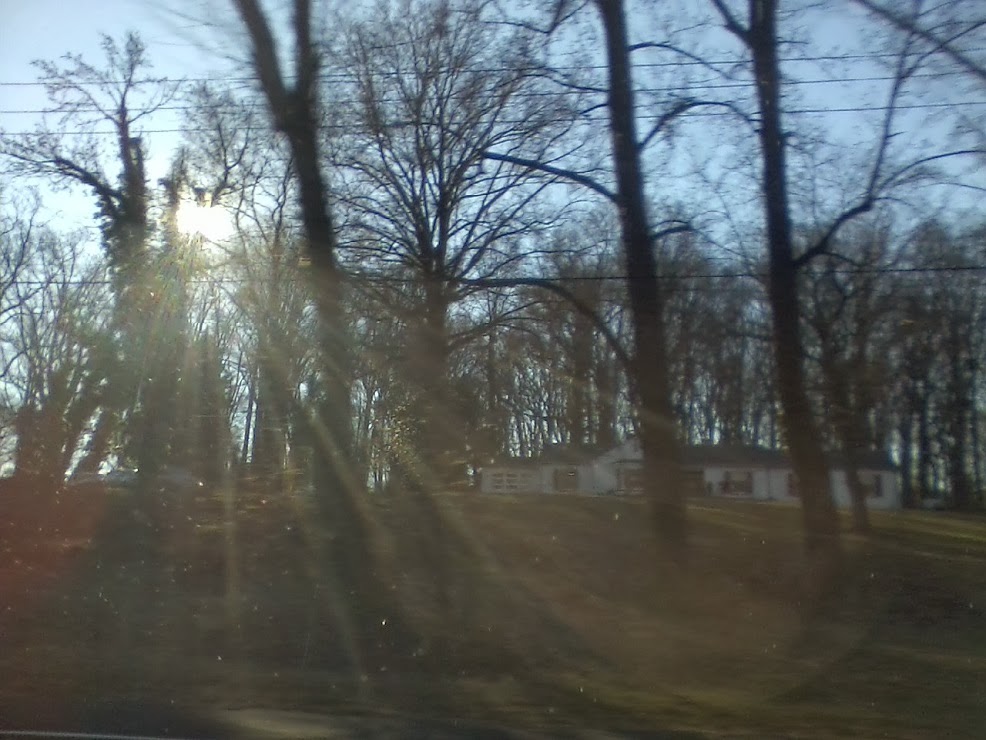 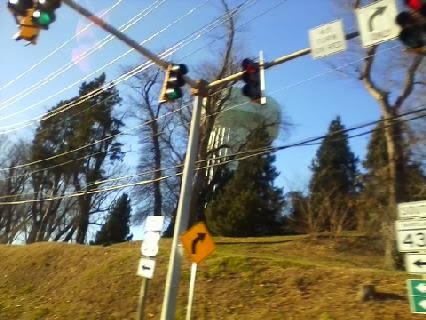 An intersection in Annapolis -- it's too late for me to look up exactly where this is or the street names, but it is heading into the center of the city -- with YET ANOTHER Anne Arundel County water tower, 2:30PM December 25, 2013.
******* 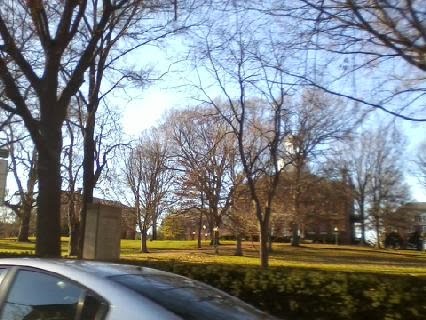 
First, the approximately 500 year old, giant tulip poplar tree that was there in the late 1980s -- ancient and barely surviving -- appears to have been removed outright.
Secondly, I've always found it so interesting that this most loopy and hyper-expensive of liberal arts colleges exists cheek-by-jowl in very conservative Annapolis to the U.S. Naval Academy.
*******


A few more pictures of the interior of Pusser's Caribbean Grille in Annapolis, Md., that I took that I'm posting just to round out the entry ... 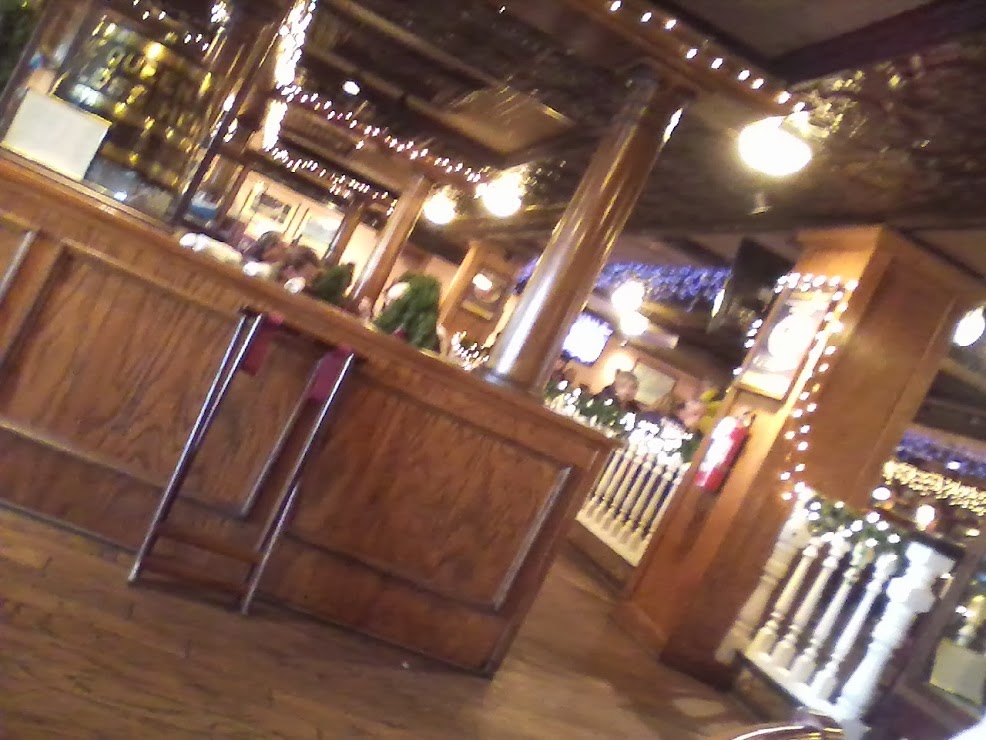 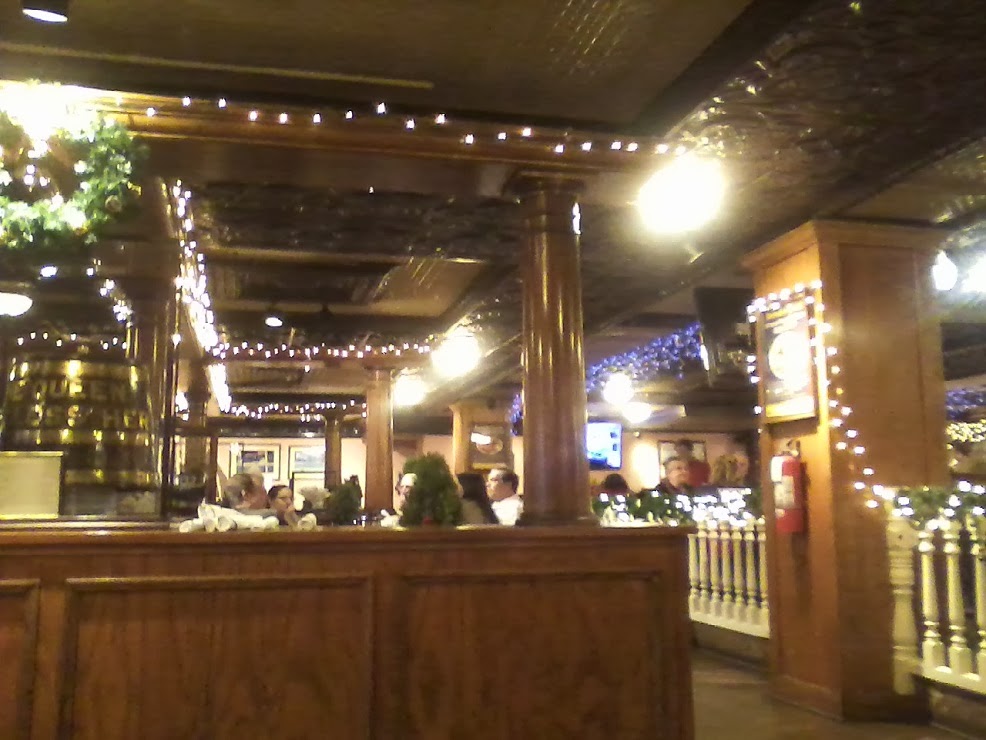 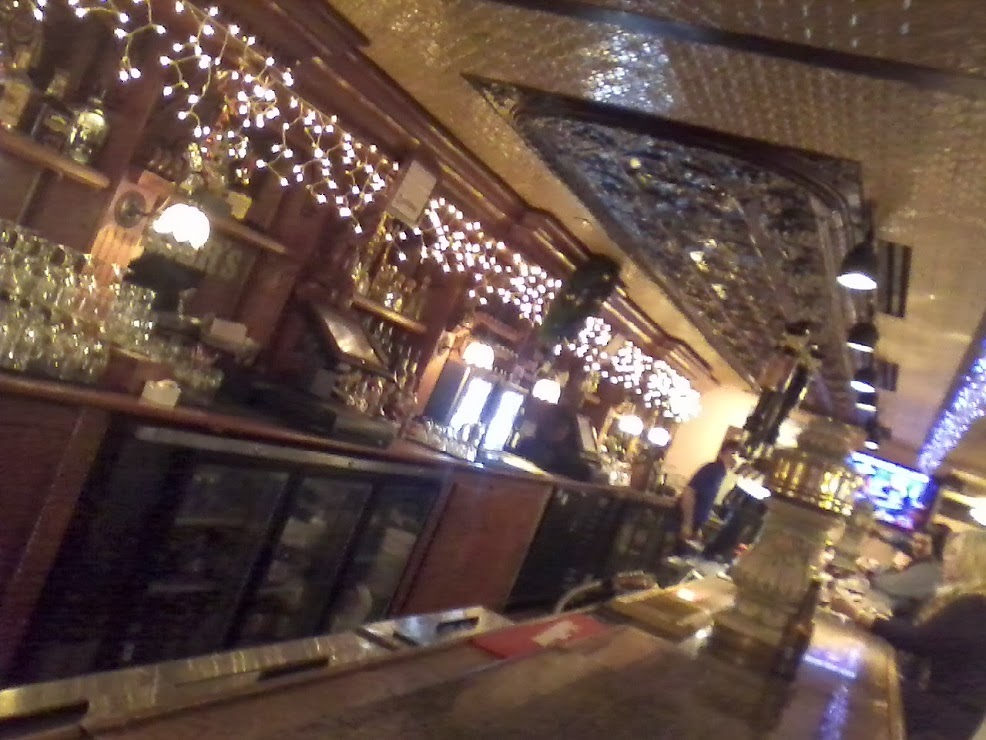 
As a very quick update, I had a decent gym workout after work including 5.3-mile treadmill jog, light weight-lifting, and a half hour swim at the Anthony Bowen YMCA. My cold (or whatever it is I have) seems to have ebbed but not gone away entirely.
OK, that's all for now. Once again, I fully intend to post my Buffalo / Niagara Falls trip pictures over the weekend. In the meantime, I intend to post a jukebox Saturday night entry. I'm unsure if I'll have an entry between now and then, though.
--Regulus
Posted by Regulus at 2:21 AM