Some Family Reflections on the Occasion of the Passing of the Last of the Acerra Boys, My Great Uncle Edward J. "Eddie" Acerra 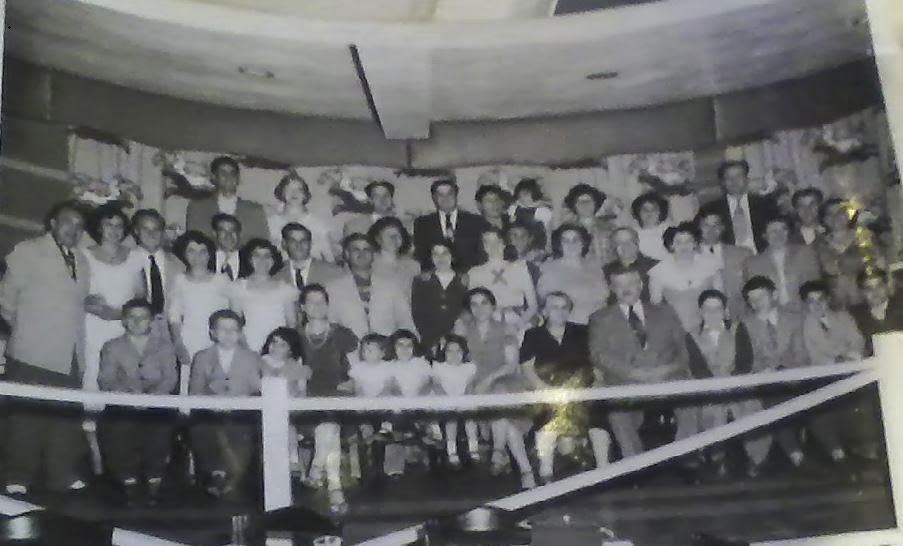 A photo of a photo that I took at Aunt Babe's 100th birthday party on Jan. 27th, 2013 at Branches in West Long Branch, N.J. It is a picture of a large black and white photo taken in 1954 showing the entire Acerra clan at the time -- 14 of the brothers and sisters -- and their spouses and children as well as great grandma Elizabeth and great grandpa Luciano.
My grandma is in this picture (fourth person on the left on the bottom row, her legs crossed), grandpa (guy standing on the far left slightly leaning over), as is my dad and my late Uncle Richard (seated on the bottom row, farthest left and second-to-left, respectively).
It was taken at some big event -- quite possibly the 50th wedding anniversary of great grandma and great grandpa -- in Long Branch, N.J. There are, by my count, 42 people in that photograph. This, obviously, is the Italian - American side of my family. (By contrast, on The Polish side in South Amboy never really got together like that. Everybody hated and deeply resented everybody. Oh, and NOBODY as far as I know is gay in the scores (120+?) of generational offspring on the Italian side.)
*******
I wanted to note that my great Uncle Edward J. "Eddie" Acerra has died.
This entry is both about this sad event and also features some pictures from Aunt Babe's 100th birthday party held nearly 1 year ago and thus is a version of the second New Jersey entry that I never actually posted. 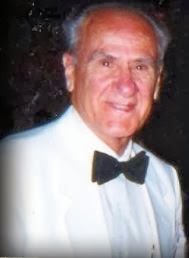 Uncle Eddie passed away on Jan. 15th, 2014 in Long Branch, N.J., where he lived his whole life and for which he worked for 41 years following his service in World War II. He was 87. He was one of the members of the Acerra Brothers Baseball team.

His obituary in the online Asbury Park Press is available here and the Damiano Funeral Home webpage to him is here.


(The image of the Vietnam Memorial and Washington Monument on this page is a bit incongruous since he had nothing to do with Vietnam or Washington, D.C. The latter is my specialty, I guess.)
Uncle Eddie's death followed less than a month after the death of his older brother, my great Uncle Frederick V. "Freddie" Acerra and (though I've not mentioned this as I really did not know her), less than three weeks after the death of my great Aunt Lucy, who was the wife of my late great Uncle Bobby. Her obituary webpage is here. 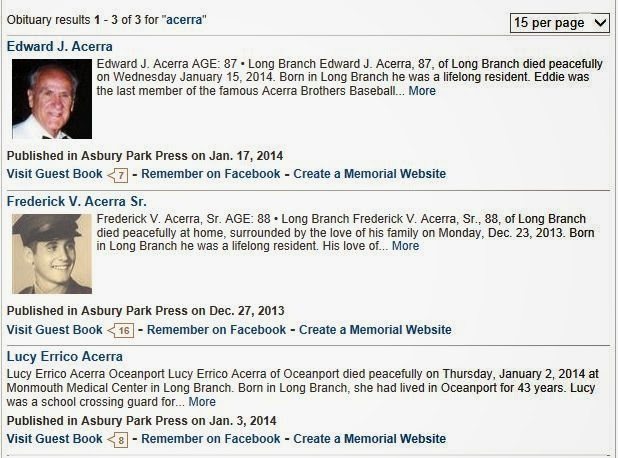 Screenshot of the results of a query on "Acerra" deaths for the past 30 days from the online obituary site of the Asbury Park Press.
*******


As my regular readers know, shortly after his death, I wrote some personal reflections about Uncle Freddie in his entry, which did not please his grandson (my second cousin removed twice), Michael, as I discussed in this follow-up entry. It was last July that my great Uncle Richard "Bubby" Acerra died. 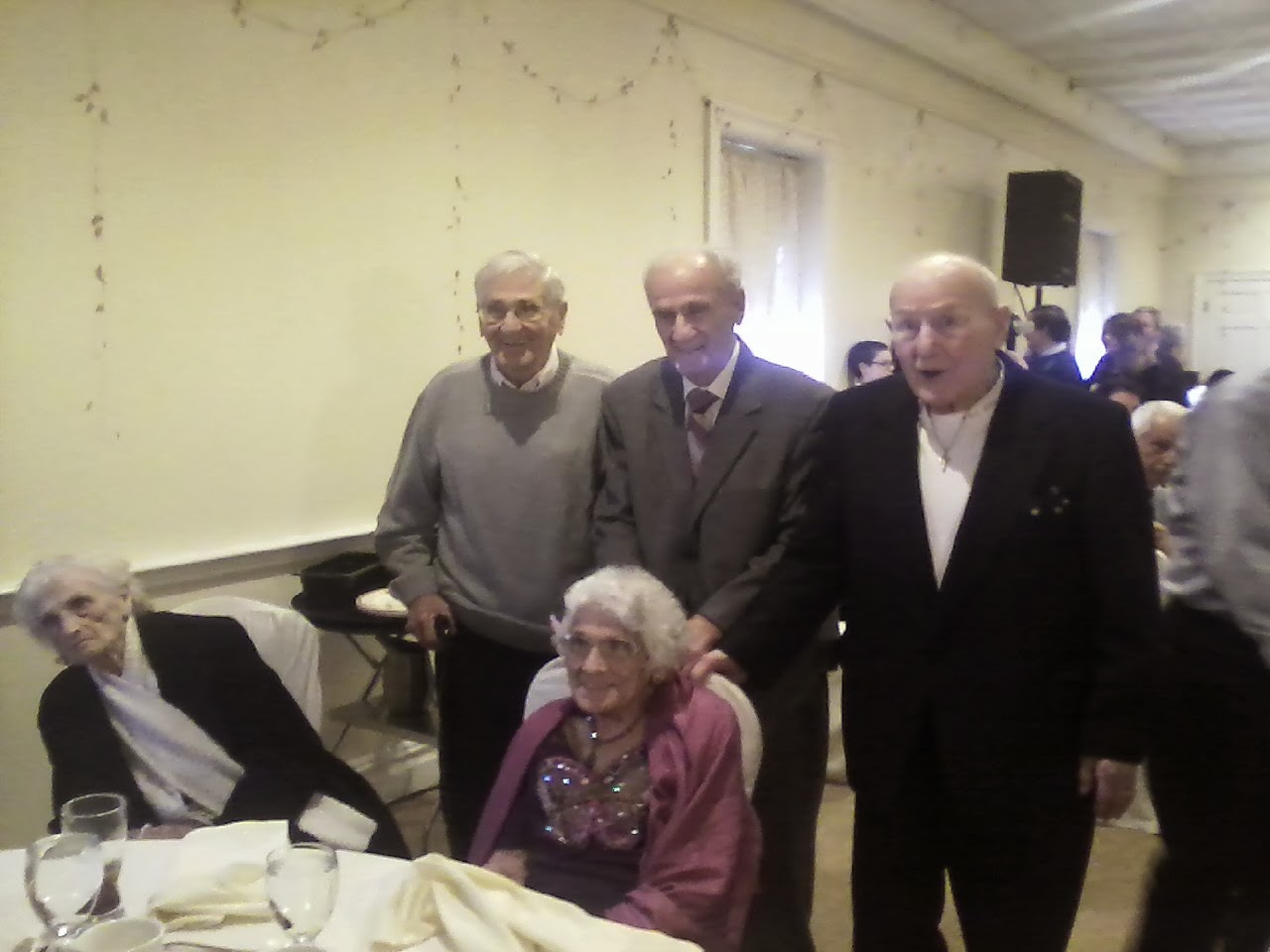 A picture of the then-surviving Acerra children at Aunt Babe's 100th birthday party in West Long Branch, N.J., 2:54PM January 27, 2013. The guest of honor, Aunt Babe, is seated and standing behind her are (left to right) are Uncles Freddie, Eddie, and Bubby. The other woman leaning away is Aunt Tessie, wife of one of the other deceased Acerra boys (possibly Uncle Dayday).
I wrote about Aunt Babe's 100th birthday party in this entry. It was almost a year ago to the day that I saw Uncles Bubby, Freddie, and Eddie at that celebration.
******* 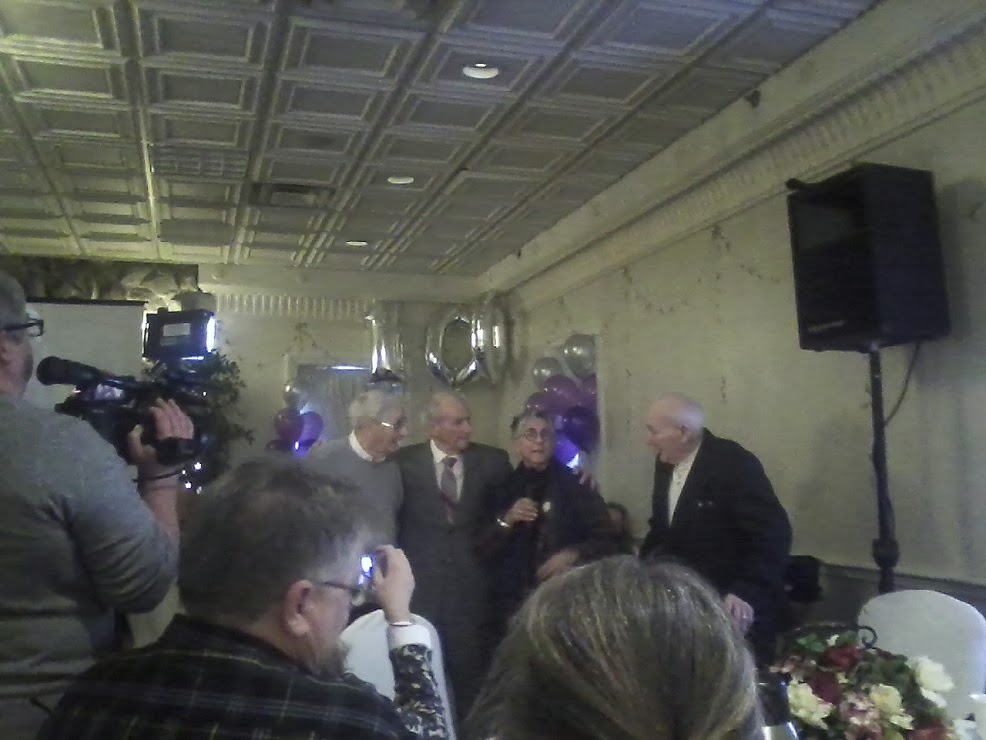 
Bubby, Freddie, and Eddie were the last of the three Acerra brothers, and only my great Aunt Babe, now a spry 101, remains of the original 15 Acerra children* that included my paternal grandmother, Florence Marie Todaro (nee Acerra), who died in January 1988 at age 79.
There were 12 boys and 3 girls with the boys in the all-brother baseball team, the Acerra Brothers.
*To clarify, there were actually 17 children, but as I understand, one died at birth and another died as a young child in the 1918 Spanish Influenza deadly pandemic, so the 15 refer to those who made it to adulthood. 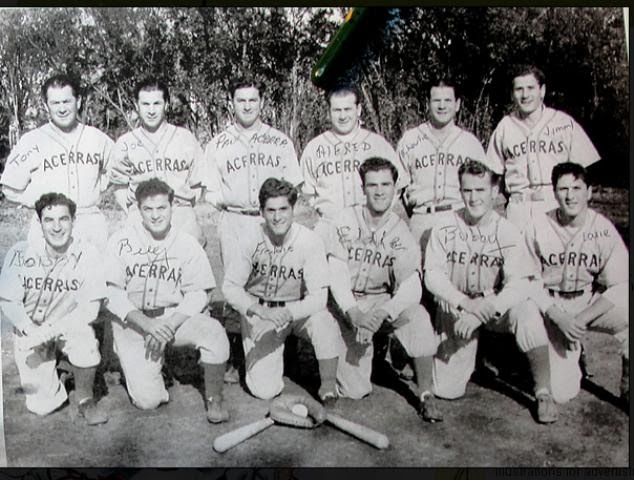 The Acerra Brothers Baseball team circa 1948 in Long Branch, N.J. Someone -- and based on the handwriting, it was my grandma -- conveniently wrote on the original photograph the names of each of the boys.
******* Here is a picture from Aunt Babe's 100th birthday at the Branches in West Long Branch, N.J., on Jan. 27, 2013: It shows my mom (seated) while my great Aunt Toni talks with my dad. Just the fact that my mom and dad were together in the same photograph was quite unusual, but it was an unusual and happy event.
To clarify, my mom had not been at an Acerra or Todaro family event since 1985, and prior to that, back when my parents were married and living together in the early 1970s.
One of Aunt Toni's sons is named Anthony -- my cousin Tony -- and I've stayed in touch with him since the birthday party, where we more or less met for the first time. (As you can see, certain names tend to recycle a lot in Italian-American families.) I'm also in fairly regular touch with Betty Ann, Aunt Babe's daughter. 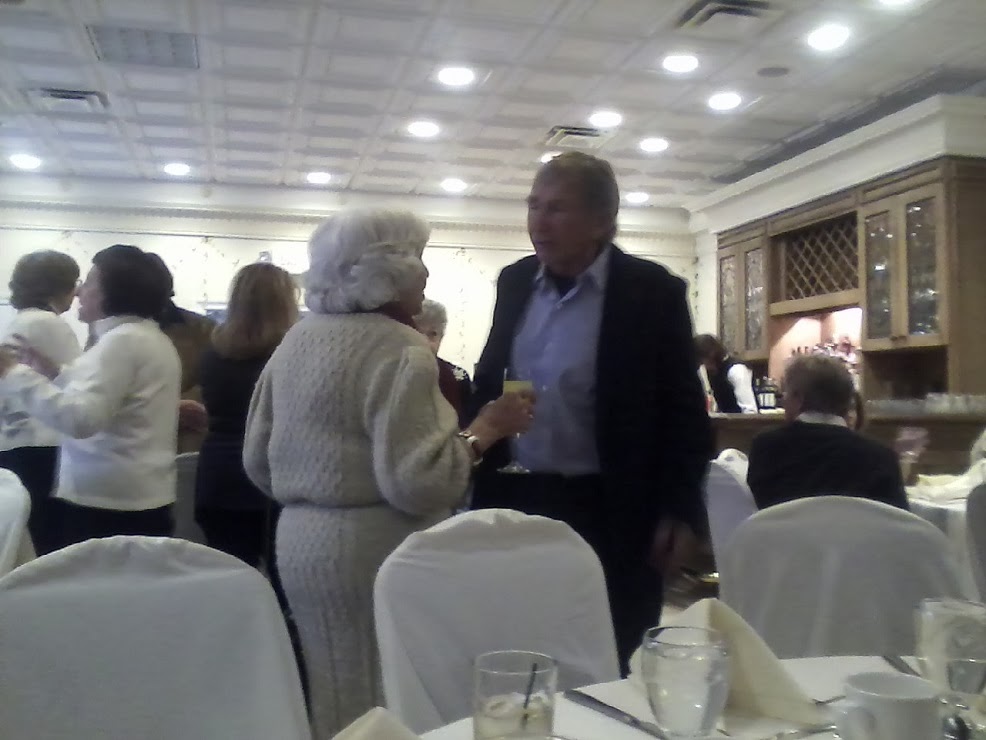 
As I noted above, there was actually another Acerra death in the past month: My great Aunt Lucy died on January 2nd, 2014. She was the wife of my late great Uncle Robert ("Bobby"). I really did not know this side of the family. I have an image of someone I think was she, but then again, there were so many older Italian-American relations that I had back in the 1970s that I could be confusing her with someone else.
However, spouses aside, at this point, I think I can list all 15 Acerra children (IN ORDER!) as shown in this photograph that I've posted a number of times that was taken at Newark Airport in or around 1937 when the family won "New Jersey's biggest family" and got to fly in a TWA prop plane. 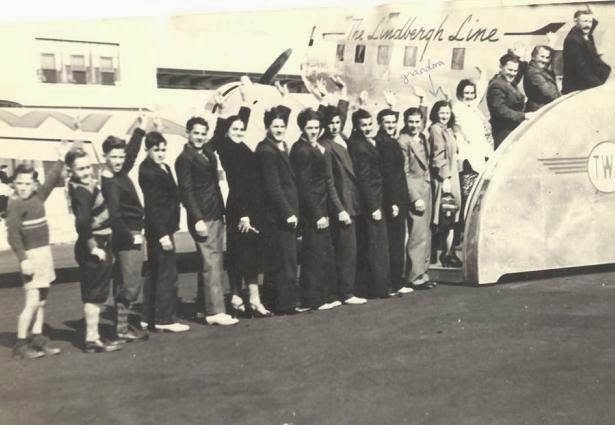 The picture features the entire Acerra clan including from the top of the stairs running down / to the left: Great Grandpa Luciano (he died before I was born), Great Grandma Elizabeth (she died in 1977) and the children in order: Anthony (Tony[1]), Kathleen, Florence, Joseph (Joey), Pauly, Jimmy, Charlie[3], Alfred[2], Robert (Bobby), Leonilda Frances ("Babe"), Billy, Freddie, Eddie, Richard ("Bubby"), and Louie (i.e., "the baby").
Awesome.


[1]Uncle Tony died in the 1940s in his 40s. He was therefore the one great uncle I never knew.
[2]Uncle Alfred had a missing eye and he always kept it closed. He was also something of a pit bull in his personality and his hair always stuck up all wild. He was married to a very sweet woman, my great Aunt Mollie, who always used to say, "No foolin'??" in place of "Really?" or "You're kidding?"
[3]Uncle Charlie's nickname was phonetically spelled "Day-Day". I think he is the one who was married to my Aunt Tessie.
*******


As for Uncle Eddie, while I have some memories of him (see below), I have more memories of his wife, Betty. (To clarify, he was married twice, and I think both were named Betty. I only knew the second Betty. She died a number of years ago (late 1990s?) and in recent years he had a companion named Nancy. 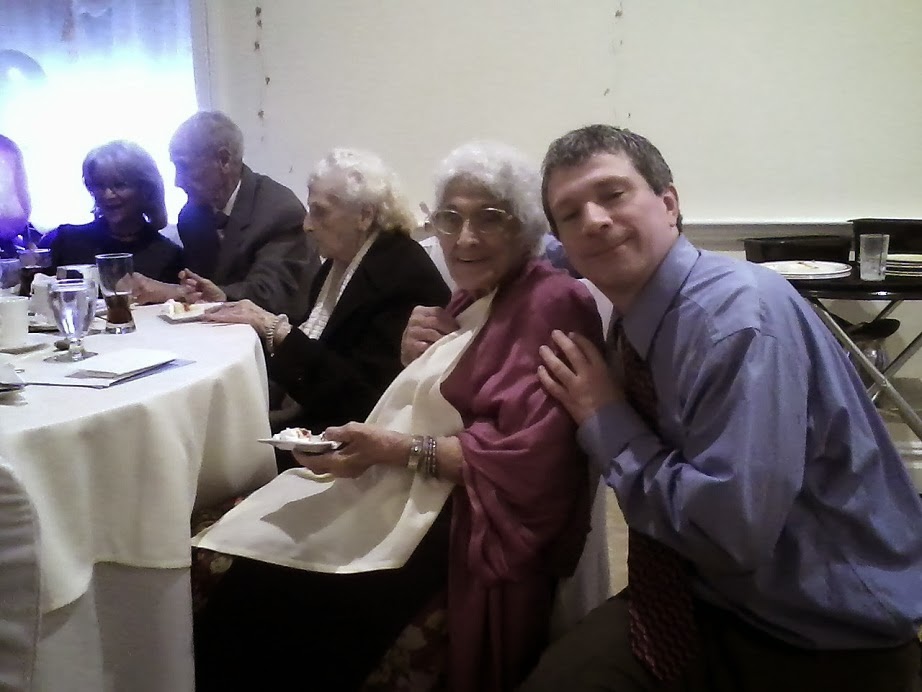 Here is the picture of yours truly with Aunt Babe at her 100th birthday party on Jan. 27th, 2013 in W. Long Branch, N.J. I am posting it because it shows Uncle Eddie and his companion, Nancy. Between Uncle Eddie and Aunt Babe is Aunt Tessie.
******* 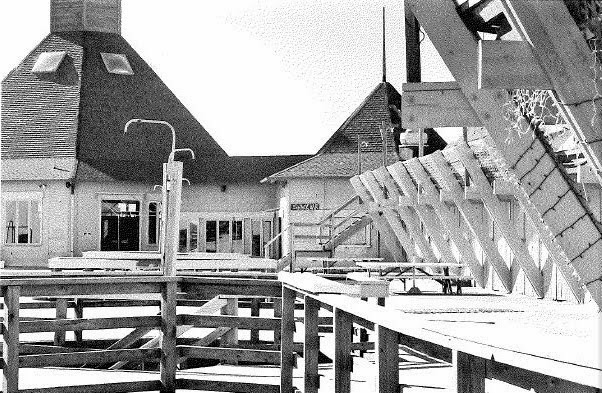 As for Aunt Betty, yes, ONCE AGAIN the lost but not certainly not forgotten Tradewinds Beach Club in Sea Bright, N.J., again figures into this: For a couple summers, Betty was also in cabana 20 in the early to mid 1980s -- the one next to our cabana 21 and where that Donna and Tony subsequently had. Betty, who also lived in Long Branch, used to drive me to the beach club every morning.
Aunt Betty was on the tall side and she had his big helmet of bleach-blond hair. She would dress up sort of like a 1940s Hollywood movie star. And she had this flattened way of speaking as if biting down on all her words. But her laugh was huge and uproarious. Think Joan Crawford meets Phyllis Diller. 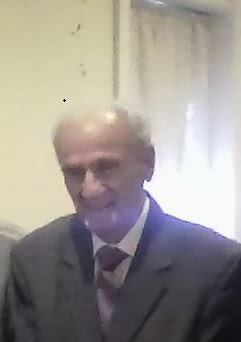 As for Uncle Eddie, I'm not really sure what to say. When I last saw him at Babe's 100th birthday party, I apologized to him for once as a 9 year old kid having slammed the door in his face when he came over to our house on Kirby Avenue (in Long Branch) because I thought my dad was home but it turned out to be him instead. (Back then, I always seemed to be waiting for my dad to come home from "going out."


I recall Uncle Eddie said to my grandmother, "He slammed the door in my face!" She replied in a sweet voice, "I know ... He was ONLY havin' some fun!"
He didn't remember the incident when I brought it up, but said not to worry about it.
I also remember once when he was over Aunt Kathleen's house on Brighton Ave. in the backroom talking to Kathleen's daughter, my late second cousin Betty Lu. Uncle Eddie was going on about how expensive the advertising by the minute was for the Superbowl, and I mouthed off about how "stupid ... that's stupid!" that was. Even at age 10, I was already neurotic brat with strange fixations on things that morally offended me.
Uncle Eddie shot back, "Well, I think those video games you play are stupid!" Betty Lu (who I was quite close to at that time) was mad at me after he left. I was a weird and nutty child, and I am sorry I said that to him, too. 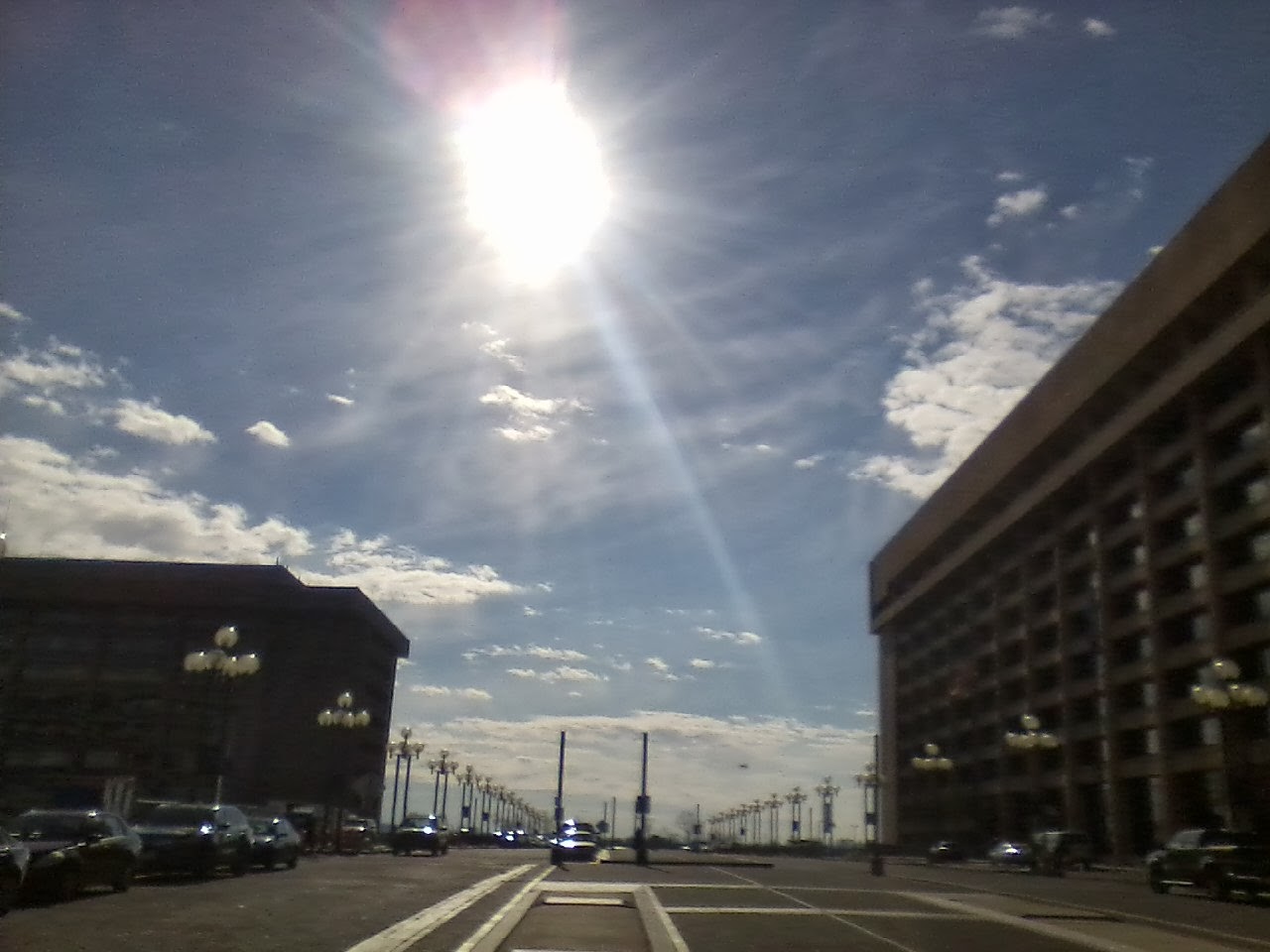 
I actually tried to call Uncle Eddie on Jan. 10th at the facility where he was -- cousin Tony had visited him and told me he was not in good shape -- but I didn't reach him. I left a message but I'm not sure if he got it.
Goodbye, Uncle Eddie.