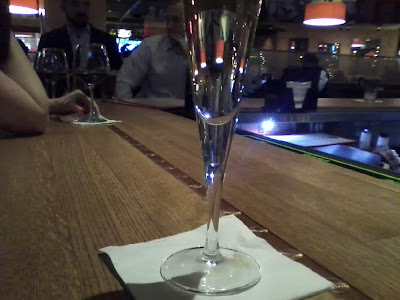 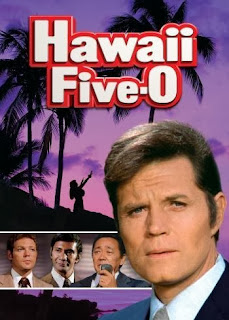 I'm home in my wee, dusty efficiency doing my laundry (well, actually, the washing and drying machines in the basement are doing my laundry while I sit in front of this computer) and watching an old rerun of Hawaii Five-O on Me TV. The episode is The Two-Faced Corpse. It features Abe Vigoda, Jessica Walter, Sam Elliott (with dark hair and no mustache), and, of course, the late Jack Lord. 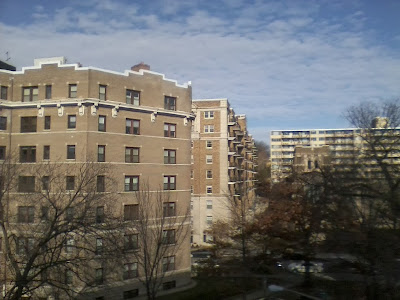 The view from my apartment looking to the northwest. The nearby buildings are the Brittany and the ornate Camden-Roosevelt, both of which front onto 16th Street, and the ugly 1960s behemoth of a building simply called by its address, 2112 New Hampshire Avenue, that actually fronts onto W Street and just beyond which is Meridian Hill Park. Picture taken at 11:13AM January 1, 2014.
*******


It's a mostly sunny, seasonably chilly, quiet day, temps. around 45F. There is a weather system approaching that may bring a rain and then some snow even to the immediate D.C. area but the dynamics are not going to come together for a biggie. There may be a winter weather advisory at some point but like so many others, this will probably turn out to be nothing. 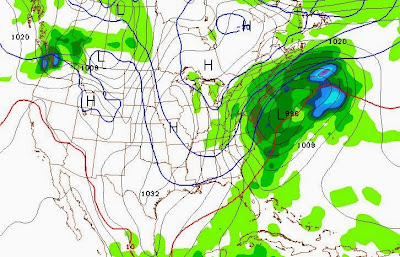 
Actually, the lack of a major snowstorm figures slightly into my New Years Eve account below. The pictures were also taken by me with my low-quality flip-open cellphone, and they are posted more or less in chronological order but not in lock-step with the narrative. 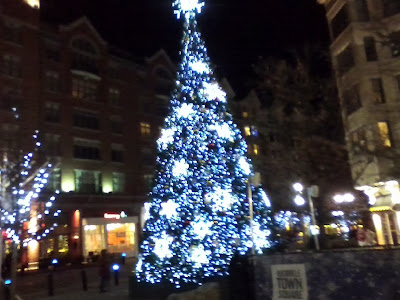 The Christmas tree -- not really a tree so much as a series of fake fir boughs strung up to look like a tree -- illuminated with pretty white LED lights, some in the shapes of snowflakes, Rockville Town Square, Rockville, Md., 5:50PM December 31, 2013.
*******


So last night -- New Years Eve 2014 -- basically sucked, although there were elements of it that were nice including the dinner (discussed below).
For starters, I left work with my co-worker and friend DD and rode the Metro with him to Rockville where he lives with his wife and two young children, a 5-year old son and 2-year old daughter. It was rather cold with a biting cold wind in the deep cobalt blue dusk that was quickly seguing to night. 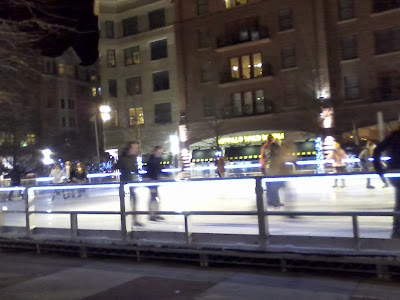 
We walked over to the vibrant Rockville Town Center (also called Rockville Town Square) to the Thai Pavilion Restaurant. It is located next to the wintertime ice skating rink. DD and his family and I did dinner there New Years Eve 2011 and then another place New Years Eve 2012. We skipped New Years Eve 2013.
DD bought me dinner. His wife -- a Montgomery County elementary school teacher -- took the two children over to a nearby ice cream shop for dessert. 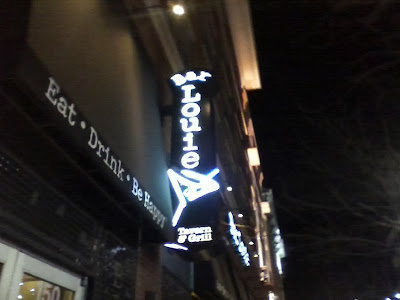 Exterior of Bar Louie, Rockville, Md., 8:42PM December 31, 2013.
I had already gone to American Tap Room (ATR) between dinner and this picture (where I left my cellphone on the bar when I went to the bathroom and then thought I lost it).
*******


As my (few) regular readers know, I'm seldom around small children or married couples with their small children. Little kids make me nervous and their mothers even more so, especially those married to my straight male ex-friends, one in particular in suburban Maryland. Then there is Wall-P and his Staff, except that situation involves money (and the obsession with amassing endless amounts of it), power (as in fawning after and being obsequious towards it), and dogs as substitute children. Oh, and the total lack of personality combined with really bad tastes.
But I digress. 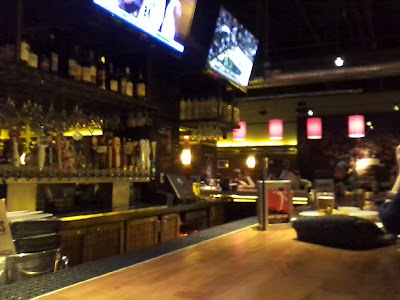 
I like DD's wife. She and I had a good conversation about the curious dichotomy of American present-day society -- the Frankensteinian hybrid of political correctness and weird Puritanism in the context of an omnipresent, profit-driven media entertainment machine that creates such a complex, fear-based, soul-crushing, absurdly demanding consumer culture for young parents and, well, just in general. Everyone is supposed to be whipped up into a state of hysteria at all times about, well, whatever is the ridiculous issue of the moment or of that particular information bubble. 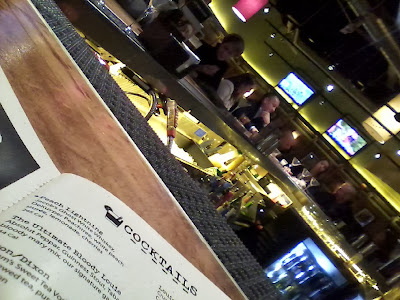 
OK, I didn't phrase it exactly like that but that was the general idea, at least what I was trying to express. The episodic media-driven panics and entertainment / information bubbles that are the twin organizing principle of our absurd society are just life-draining. 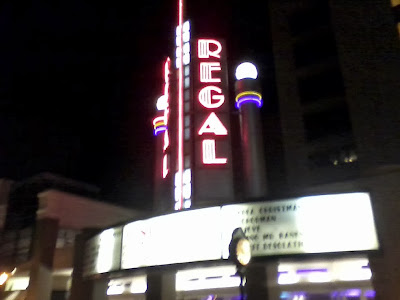 The Regal Theatre with its Art Deco façade all illuminated at night, Rockville, Md., 9:23PM December 31, 2013. (The exterior lighting is a lot more colorful than my cheap cellphone camera image suggests.)
Such a pretty theatre. Too bad most of the movies -- as in almost always the case in America -- are so dreadful. Say, where's Mr. O'Henry's film class being taught this semester??
*******


I listen to DD explain the "schedule" for their son to which he and his wife have to adhere. Children dare not just play outside anymore and instead there is this absurd network of events and play dates and socials involving other parents and their children. Somehow, we've entered a sort of Blade Runner future, at least elements of it.
Of course, I as a ridiculous gay man living in my D.C. Bubble, am not involved in any such reality. However, I am aware it exists.
DD's little boy -- who is scarily smart with unusual recall of things from when he was two years old -- listened to us even as he watched a football game on a TV monitor over the bar. He has gotten to really like football. 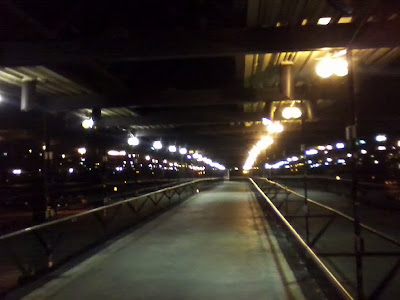 The pedestrian overpass of Rockville Pike that connects the Rockville Metro and train stations to the main downtown and courthouse area, Rockville, Md., 9:27PM December 31, 2013.
*******


Anyway, DD and I did a quick shot of Jack Daniels (DD can drink when he wants to, though it's rare) at the bar in Thai Pavilion before we left and headed over to the nearby ice cream shop to meet his family.
Soon thereafter, I parted company from them. I walked in the cold, starry night air to the nearby Bank Ho America ATM, now in a trailer as the building in which it had been housed -- a ghastly 1960s/1970s structure -- was under thorough renovation. I then went to American Tap Room where I had one drink ("The Potomac Mom" -- see entry lead image). Finally, went to Bar Louie on the other side of the town square, where I had another drink (a Stoli orange vodka and soda water and an orange slice that is my new drink of choice). 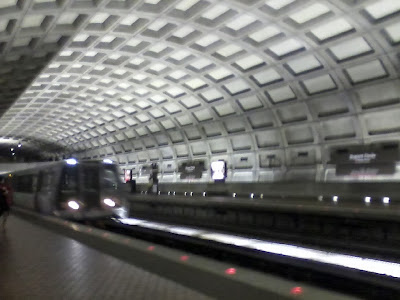 
Oh, yes, while at Bar Louie and then walking to the Rockville Metro, I had a vigorous, pleasant text exchange with my second cousin Tony in Long Branch, New Jersey. He had just gotten back from Austria on a trip there with his wife when he learned of my great Uncle Freddie's death. Freddie is Tony's uncle as Tony is the son of one of Freddie's older brothers who died many years ago. I always forget which brother that was. Tony's mom -- my great Aunt Antoinette ("Aunt Toni") -- is still alive. She is very nice person (and now 88 years old). 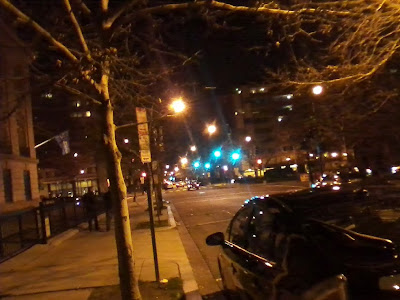 
Returning to my story ... I headed back into D.C. on the Metro, alighting at Dupont Circle. I had arranged to meet Gary a bit later -- in time for the midnight hour -- at Larry's Lounge. First, I walked home, dropping off my computer, although I set it up first and checked the weather. That is, I went to the NCEP site and checked the NCEP Model Guidance page. The 0Z NAM was in and the 0Z GFS was slowly rolling in. 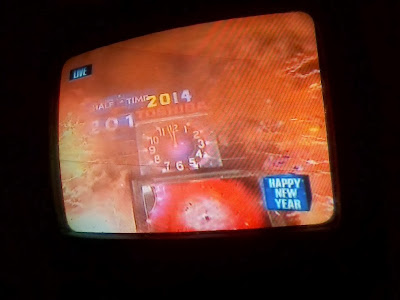 Image on my clunky mid-1990s television set showing the ball drop and blizzard of confetti in Times Square in New York City at the precise moment of midnight, 200 miles away from my dusty little Washington, D.C., 12:00AM January 1, 2014.
For some reason, I always tune it to ABC when I watch the ball drop.
*******


I watched an episode of The George Burns and Gracie Allen Show on Antenna TV in the meantime. Eventually, the 0Z GFS was in and it was the same crappy outcome -- no real phasing of the northern and southern stream systems, too progressive, no real dynamics, no real snow here. I was really pissed off. I know I shouldn't take the weather personally, but it is so damn frustrating around here in the winter, and we have such a narrow (and shrinking) window when it can actually snow.
I texted that to Gary, which probably eliminated any desire he had to meet me. 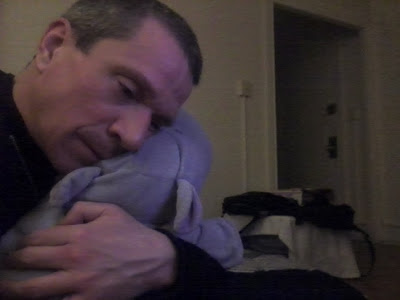 
(Hawaii Five-O line I just heard said by Sam Elliott's character (young and mustache-free) to Jessica Walter's character: "We better shake hands for the benefit of hidden cameras." Ha ha)
I made it over to Larry's Lounge, where there was a small crowd, some regulars. I was in such a rotten mood and in no mood for the usual New Years Eve paraphernalia. You know the stuff: cardboard hats with those little strings you wrap around you head and noise makers, both the kind you blow and the kind you spin around.
It was already 1130PM-ish and Gary was not there. I texted him and long story and conflicting accounts later, he said he was not actually meeting me, which really upset me. I finished my one drink and walked home by 11:55PM. I watched the ball drop in Times Square on ABC at the midnight hour, and then went back out. 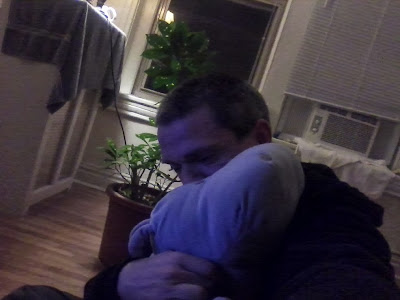 
Gary and I had a fight by text message and now we are not talking, so I guess the Buffalo / Niagara Falls-in-winter trip later this month to see snow is off. I rode my bike to nearby D-I-K bar where Chris H. was working. I chatted with a long-time acquaintance John S. and this other guy. I had a drink there. The place closed at 130AM and people headed out. I then rode over to Nellie's, which was open for an extra hour. The place was moderately crowded. I had a couple more drinks and then biked home, although I took a circuitous route down Vermont Avenue to Logan Circle and up the 15th Street bike route.
I got home and went to bed by about 330AM. 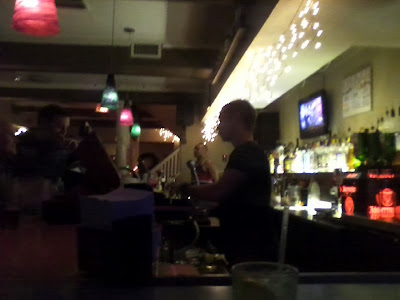 
The whole New Years Eve last night felt sort of perfunctory. There didn't even seem to be that many people out. As for reflecting on the now-concluded year 2013, I guess it was OK for me. Blogger Andrew Sullivan had a nice piece reflecting on the year 2013 -- how crappy it was and yet how events happened that may make us look back on it as actually a good one. The piece is (link embedded): 2013: An Alternative History. 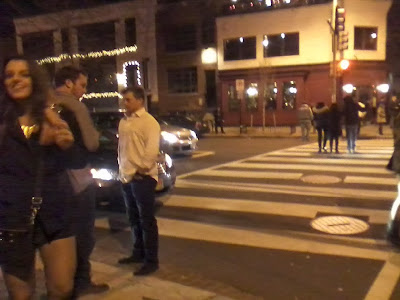 
OK, my laundry is now finished. I'm not really sure what to do today. I have off for the Federal holiday. The gym is closed. I may take a bike ride and stop, as I usually do, at a bar. Maybe I'll go to Chadwicks in Georgetown. I don't know.
Sigh. 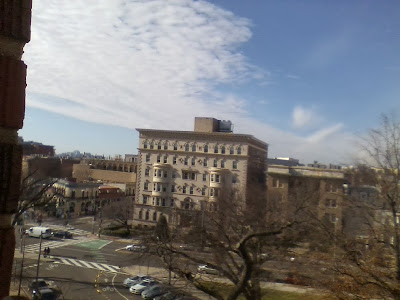 The view from my apartment looking to the west / southwest that I usually post. This overlooks the intersection of 16th and U Streets and New Hampshire Avenue NW, Washington, D.C. The large building in the picture is the Balfour, a much more upscale building than the one where I live. It is located right at 16th and U, although it is also next to a fire department station. On the horizon, you can see the towers of Rosslyn in Arlington. This was taken at 11:27AM January 1, 2014.
*******