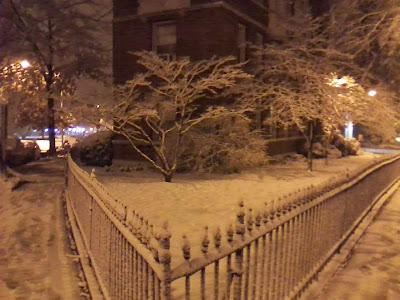 A snowy night in Washington, D.C., as seen at the corner meeting point of the 2100 block of New Hampshire Avenue and 15th Street outside a building called the Wakefield (another William C. Smith-managed property just like my Hampton Courts one a block from here).
**This is a NEW lead image for this entry based on the second update.** (Yes, it is meant to ironical to the original entry theme while also pretty.)
******* 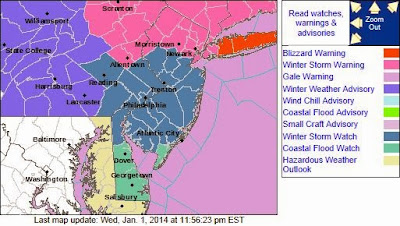 The Mount Holly / Philadelphia (PHI) CWA advisories has of 11:56PM 1/1/2014. Note the winter storm watches and warnings AND blizzard warning on Long Island. Note also that portion of the Sterling (LWX) CWA including D.C. proper -- nothing. Zippo.
*******


I wasn't going to update this blog tonight but I just wanted to note that Sterling LWX is making every effort to bend space, time, physics, and reality in order to make sure it doesn't flippin' snow here late Thursday into Friday. The 10:38PM discussion just seems weirdly out of sync with the model runs (indeed, the 0Z GFS MOS gives BWI 4 to 6 inches of snow while the ECMWF ("European") operational model would give us 6+ inches of snowfall. 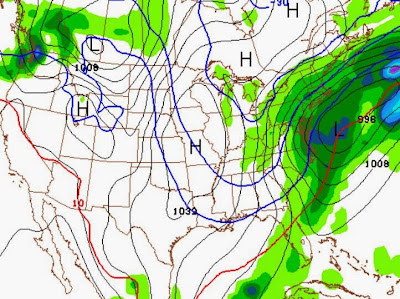 
However, I've learned in these painful situations, I'm the one who is flippin' mistaken. Furthermore, I've learned that Sterling and/or the model showing a bust / nothing are ALWAYS the correct / verifying one.

Oh, and I have LESS THAN ZERO desire to see what the dainty folks over at the Capital Weather Gang are saying.

Right, overdone ... Except how exactly do you "overdo" zero?

Meanwhile, Ian can take pictures of sunrise sunlight through the U.S. Capitol dome with the mewling, annoying caption: "Savor the non-snowy Friday morning ..."

Frig them and their forecasts and analyses and everything.


However, let me just end my weather discussion by saying that this is one of those events that could actually surprise us the other way -- even in D.C. proper -- although at this point, I would not bet on that.
******* 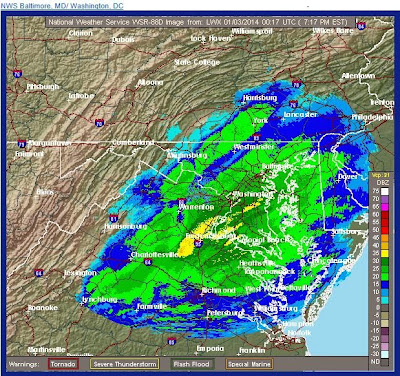 The Sterling LWX radar in base mode reflectivity at 7:34 PM January 2, 2014. It shows moderate to heavy mostly snowfall (maybe some sleet as well) setting up in bands just over and south of the D.C. area.
*******


There is moderate to heavy snowfall across the Washington and Baltimore areas tonight with borderline treacherous driving conditions. While the snow is not expected to last very long, amounts of 2 to 4 inches are generally expected with more to the northeast of Baltimore and onto the Delmarva and into New Jersey/New York. 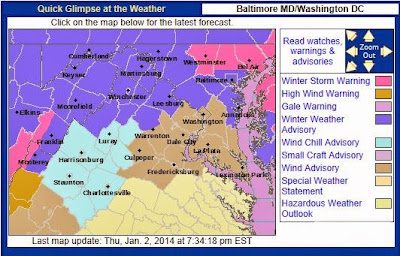 The advisories in effect for the Sterling LWX NWS county warning area (CWA) as of 7:34PM January 2, 2014. Except for Montgomery County, Md., the immediate D.C. area has no snow-related warnings at all on a night that is snowy with accumulations and slippery.
*******


For reasons that are unclear, the forecasters at Sterling LWX have refused to issue even a winter weather advisory for the District of Columbia and the southern counties. At this point, it is actually outright rresponsible of them not to do so. I'm not sure what the forecasters there (one in particular) are trying to prove but it really is irresponsible of them. Furthermore, the CWG folks (yes, I know) are doing a much better job both in terms of forecasts and real-time information. .
OK, that's all for now. I am going to the gym tonight. I may update the blog later.
End of update.


So in the end, Sterling LWX finally -- necessarily -- issued a winter weather advisory for the District, Prince George's County, Arlington, and Fairfax Counties. Whoever came on a late shift issued the advisory -- well after the fact and despite the other fact that this situation really needed a winter storm warning, at least for the close-in suburbs. 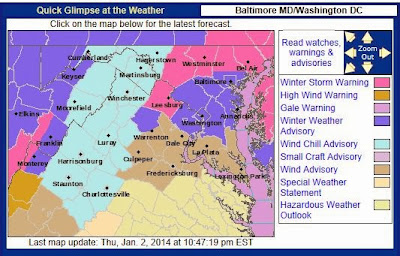 LWX advisories as of 10:47PM January 2, 2014
I'm really baffled how it is that Sterling LWX got into some weird collective mindset (or maybe it was just the one meteorologist in question) where they discounted so much information and were so sure. Oh, and when the advisory was finally issued, there was no mention of it in the subsequent 8:41PM discussion. That discussion was issued six hours to the minute after the previous one discussion on a day that required frequent updates. That said, both discussions contained the same big to-do about the impending cold weather and overnight lows.
End of second / final update.


As for my now-concluded Wednesday, New Years Day, it actually was in the end a decent one, in particular tonight at Larry's Lounge with Gary and the regular bar gang, and despite the fact I felt like sh!t for most of the time.
Earlier, I biked to No. 9, where I had a drink, and then via the National Mall / Washington Monument / Lincoln Memorial to Chadwicks in Georgetown for dinner, and then over via Georgetown side streets to Larry's Lounge, where it was an interesting night. I also had a nice conversation with Gunther's dad about his combat service in Vietnam in the late 1960s, and how he sees that situation then and now.
OK, going to bed now. G'night.