Catch This Arctic Express / Polar Vortex If You Can; Google Mapping a Sunshine State Paternal Trailer-by-the-Sea and Beachside Prole Park 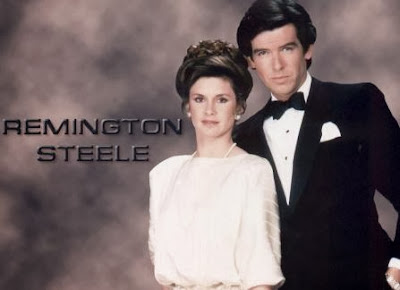 I'm home watching an episode of Remington Steele on Me-TV, part of its Sunday afternoon "Catch Me If You Can" line up of detective shows. I quite like the show Remington Steele -- I see now that it was a fun murder mystery / detective show, well suited to its 1980s timeframe.
This is the same lineup that features much grittier and rougher series Cannon and the quintessentially 1970s show The Rockford Files.
*******


I am planning on going to the gym (second day in a row) because at this point, it looks to be so flippin' cold tomorrow night that I'm not sure I want to leave the place showered and wet. It also turns out that the Anthony Bowen YMCA is open until 8PM on Sundays, unlike the National Capital YMCA, which is just until 530PM on Sundays. 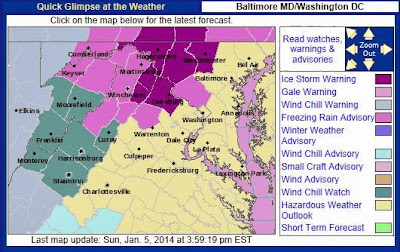 
Turning to the weather, it is a foggy, drizzly day here in D.C. proper with temps well above freezing (around 40F). There is freezing light rain and freezing rain well to the north and west with ice storm warnings presently in effect in Carroll, Frederick, and Washington Counties, Md., and Loudoun Co., Va., and more general freezing rain advisories, though not here in the District and immediate environs. 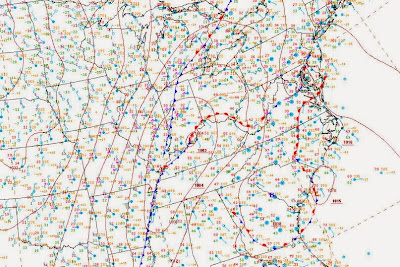 
The Arctic blast across much of the eastern half of the United States associated with the quick swing-through of the wintertime polar vortex itself that I talked about yesterday in this entry is already underway with the actual front stretching from Michigan back into the mid-Mississippi River valley and down to the Louisiana Gulf Coast.
There are presently wind chill warnings in effect across an unusually large swath of the Lower 48 including all or parts of at least 20 States. 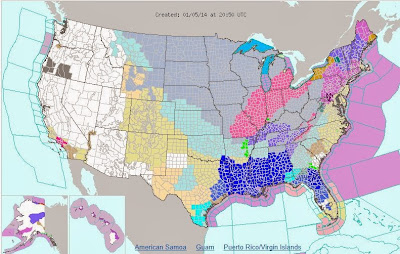 The full map of color-coded weather advisories in effect across the United States as of 2050UTC (3:50PM EST) January 5, 2014.
This image does not contain the legend of what color is what but the light blue-gray are wind chill warnings and the lighter light blue are wind chill advisories. However:
* The dark blues are freeze and hard freeze watches;
* The cyan blue across South Texas and parts of southeastern Alabama are hard freeze warnings;
* The dark turquoise (or whatever that color is) across Lake Superior and northern Lake Michigan are freezing spray warnings;
* The magenta -- or rather, deep pink -- across much of Missouri, Illinois, Indiana, southern Michigan, and northern Ohio are winter storm warnings; and
* As mentioned above, the light purples are freezing rain advisories while the dark purples are ice storm warnings, which are in effect well to the north and west of D.C.
*******


Here are some current conditions and graphical icon and text forecasts for select cities showing just how brutal is this Arctic blast ...

Indianapolis, Indiana
It's 31F now (or when this screen capture was taken a short while ago). However, the low tonight is forecasted at -13F and the high tomorrow at -11F. This means that the normal diurnal process be will almost entirely completely negated by advection of Arctic air tomorrow. Indianapolis also gets upwards of 13" of snow that will blow around with wind chill values as low as -40F.
*******

Naperville, Illinois (just west of Chicago)
It is presently 15F. The low tonight is forecasted at -19F and the high tomorrow only -16F. Wind chill values could be as low as -43F. About 2 to 4 inches of snow is forecasted.
*******

Minneapolis
Minneapolis is already at -4F and the overnight low is forecasted at -26F and tomorrow's high -15F. Wind chill values could be as low as a quickly-lethal -52F. Well, for that matter, -26F is also quickly lethal.
*******

Grand Flippin' Forks, N.D.
It is -19F and the lows tonight and tomorrow night are forecasted at -30F with highs tomorrow of -18F. Wind chills could be as low as -58F, which is not something you should even venture outside into no matter how bundled up you are.
Who the flip (or frack) would want to live in Grand Forks, North Dakota??
*******

Oh, and here is the Washington, D.C., forecast (actually, Northwest D.C., 2 miles NNW of whatever is considered the downtown grid point). D.C. proper gets as low as 5F (Dulles / outlying areas may get to 0F or even a degree or two below zero).
We may get some snow as the Arctic front blasts through in the early morning probably only flurries and maybe brief snow squalls, not much accumulation. Much of the precipitation presently associated with this front will move into southern Canada along with the dynamics.
The Arctic outbreak should last about two days before it quickly ends. 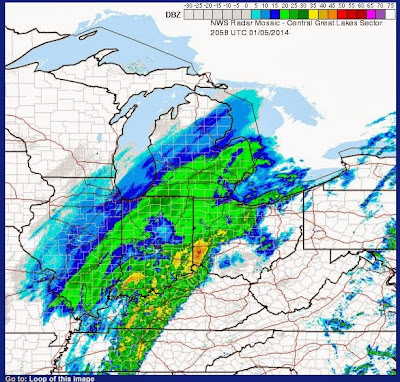 The Great Lakes Sector NWS radar mosaic at 2058UTC (3:58PM EST) January 5, 2014. Again, most of this precipitation will be shunted well to the northwest of the mid-Atlantic along with the dynamics associated with this frontal boundary.
*******


As the map of the weather advisories shows, there are freeze and hard freeze watches in effect across the Gulf Coast states and deep into Florida including Flagler and Volusia Counties. And speaking of Flagler County ...
I had a 45 minute phone conversation with my dad. It's easier to talk to him when Unstable Shannon is not around. Of course, the real source of unstable-ility is my dad living with her in a tiny trailer. Indeed, I simply cannot visit him as long as she is around, and I don't know how long that will be. Or if I do visit, I will have to rent a car (something I've never done) and stay elsewhere. But this would be a real pain in the ass. 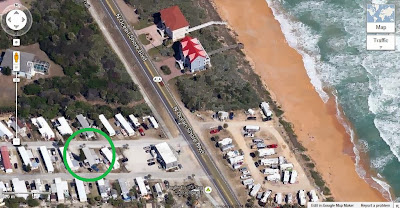 About that trailer, he lives in a small trailer park or campground located off North Oceanshore Blvd., about a mile above the end of the actual City of Flagler Beach and at the boundary of a place called Beverly Beach and unincorporated Flagler County. It is shown in the Google map image above with the trailer in question circled in green. It is conveniently located one trailer away from a local bar called the Iron Boot Pub.
His trailer (where he just moved a few weeks ago) is actually less than 500 feet from the Atlantic Ocean surf (mean high tide mark?), and I would not mind visiting -- except for the context of a crazy, unstable woman and her 14-year old daughter who occasionally visits.
To quote the Hysterical One, "AIN'T GONNA HAPPEN! AIN'T GONNA HAPPEN! AIN'T GONNA HAPPEN!"
******* 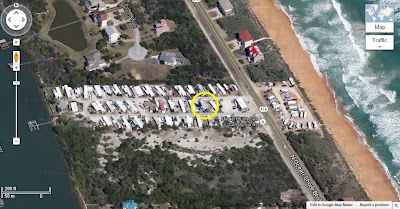 Here is a slightly broader view, again with the trailer in question circled in yellow.
There appears to be nouveaux-riche bourgeoisie living cheek-by-jowl to the local proletariat population. The latter refers to the unemployed and/or unemployable underclass and includes the social detritus that drifts down the U.S. Eastern Seaboard from colder, snowy northern climes and ends up in this part of the Sunshine State with little or no opportunities, although the climate is sufficiently warm to act as a draw.
FYI: Both my parents now live in trailers -- my dad in unincorporated Flagler County, Fla., and my mom (and stepfather) in Millersville, Md.
HUZZAH!
OK, that's all for now. Stay warm in this cold weather -- and wear thermals.
--Regulus
Posted by Regulus at 5:25 PM